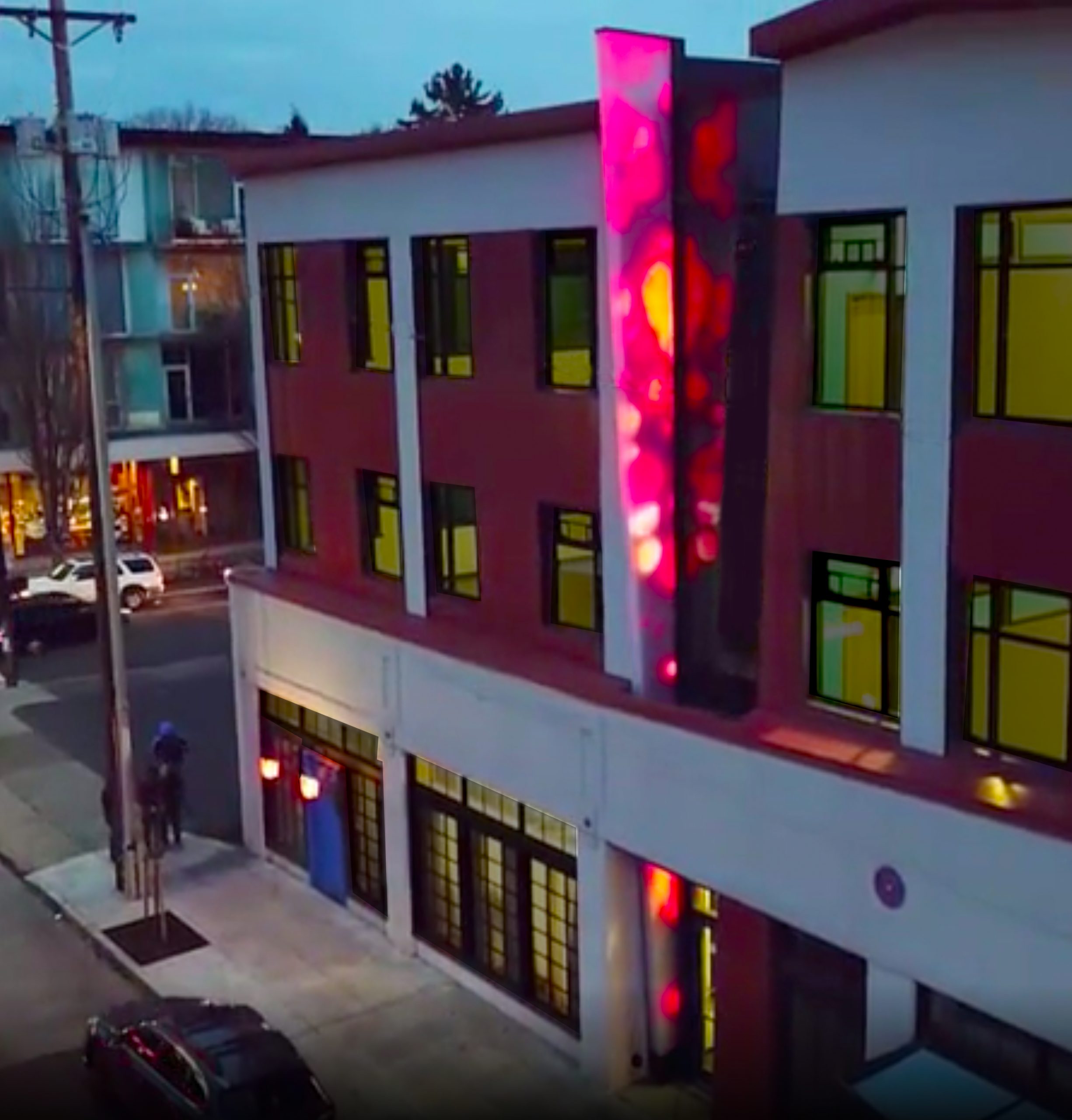 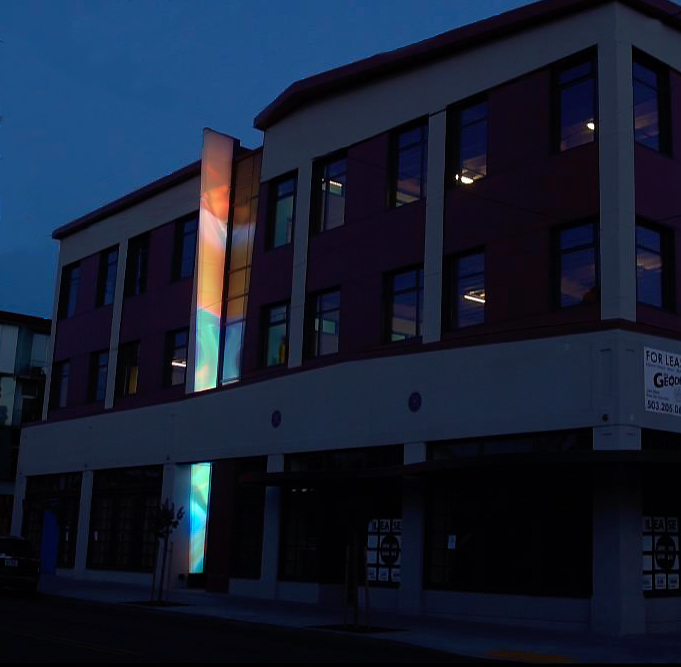 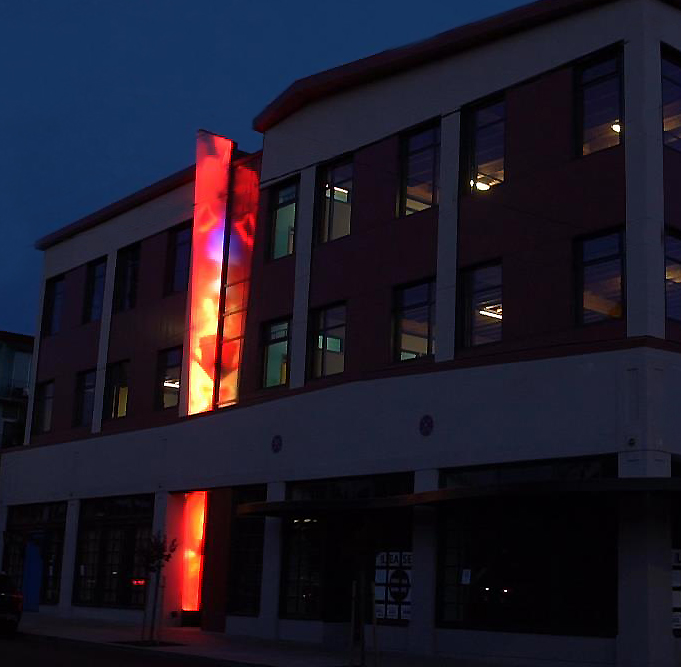 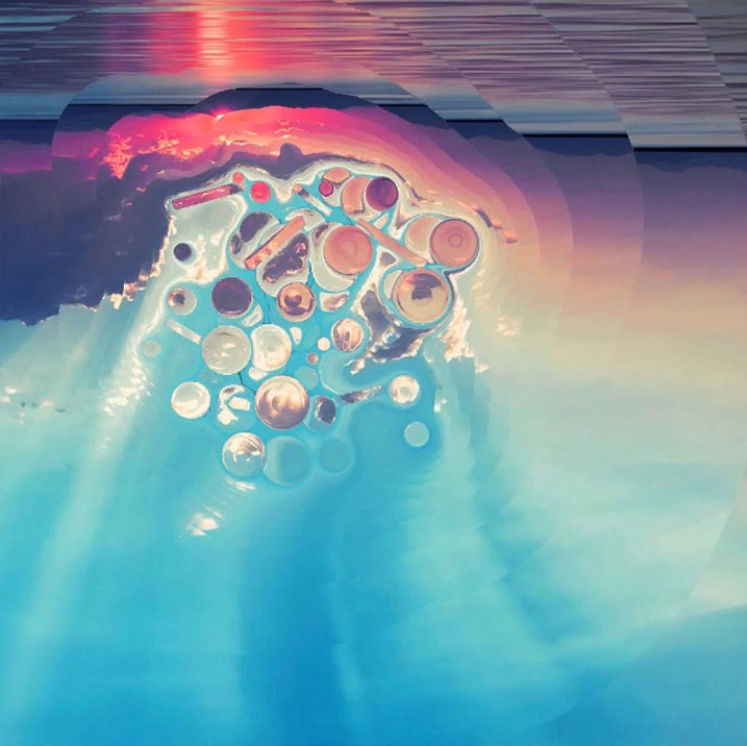 Two animated light boxes were designed into a 2-story addition for an existing building in Portland, Oregon. The custom acrylic boxes are 35’ high, expanding from 12” x 8” at street level to 44” x 8” at the top. Each “light blade” contains about 15,000 LEDs driven by proprietary software/hardware. Images fed into the system are manipulated into continuously changing abstract patterns of color and light. The building’s interior incorporates numerous angles that are reflected in the shape of the light blades. The building was renamed “The Geode,” a creative nest for entrepreneurs. This space celebrates creativity.

The building purpose as a creative hub within a very creative community required a dramatic differentiator. The goals were:
1. Create a unique visual feature that attracts attention from the street
2. Design and build a visually engaging element that entertains and inspires imagination
3. Involve local creative people by inviting them to submit their art to be projected

Sculptor (and building owner), Martin Eichinger, began his career creating technology-driven interactive science museum exhibits. His dream was to triple the working space in his studio/office building. He hired Waterleaf as the architect for his vision. Concurrently, a dream team of technical wizards was recruited to design, program, test, and build the light blades. The variety of experience and creativity of the team was critical for endless problem solving as the project evolved.

Once the light blade concept was defined, its form and functionality were integrated into the building design. The team went to work creating, prototyping circuit boards, writing code, testing the results on small LED panels, and evaluating the impact. Flexibility for manipulating imagery for day and night visibility was a key benchmark.

Sculptor and experience visionary, Marty Eichinger said, “If we can do this here, we can create visual experiences anywhere.”

The sculptor and creative driver behind this project began his career creating interactive science museum interpretive projects. After many years as a successful narrative sculptor working in bronze, Marty has returned to his first passion, the art of experiences. He has been a contributor to displays at Burning Man in the past as a test site for his ideas. This project, and the technology developed for it, is a direction his studio will now focus.