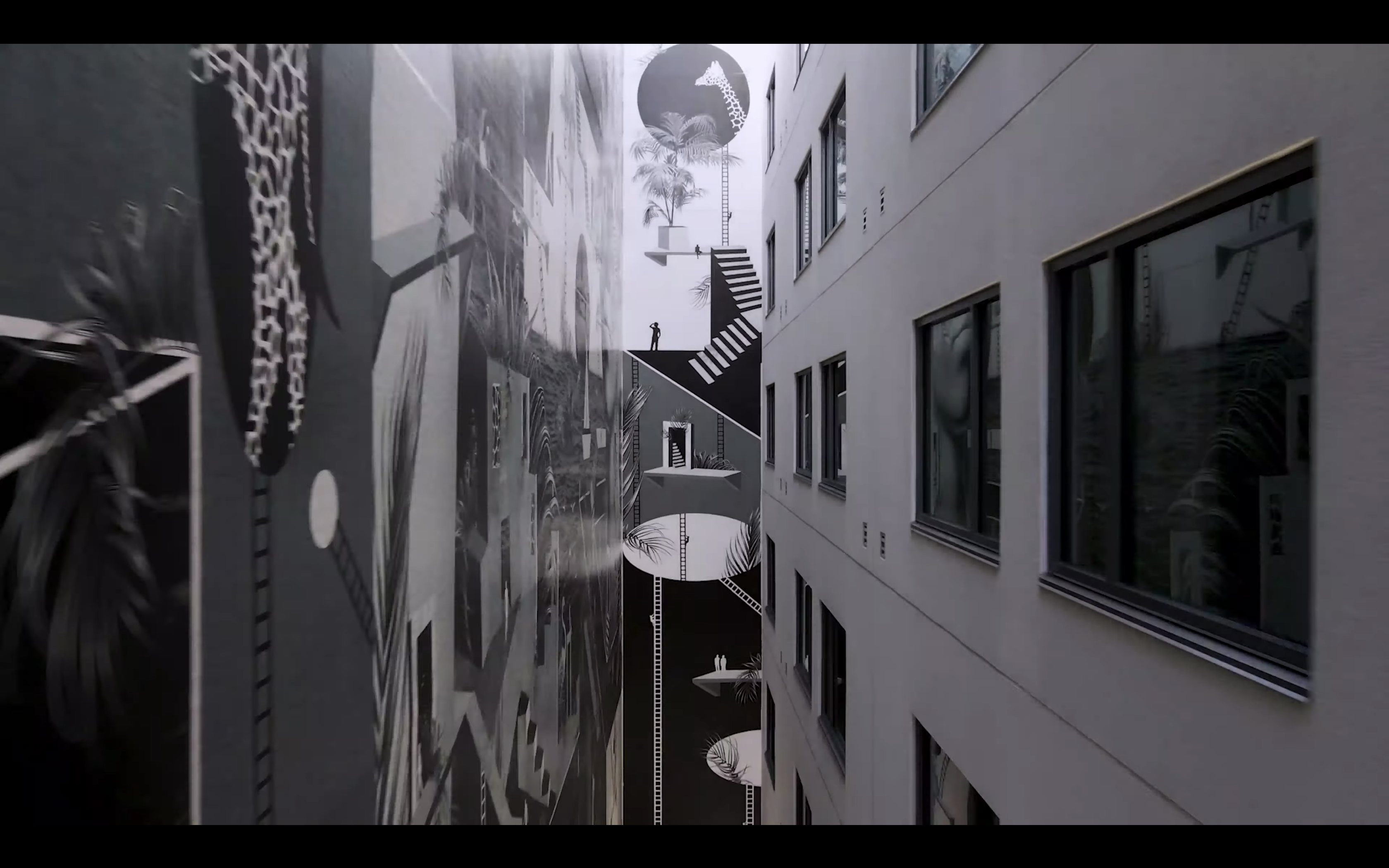 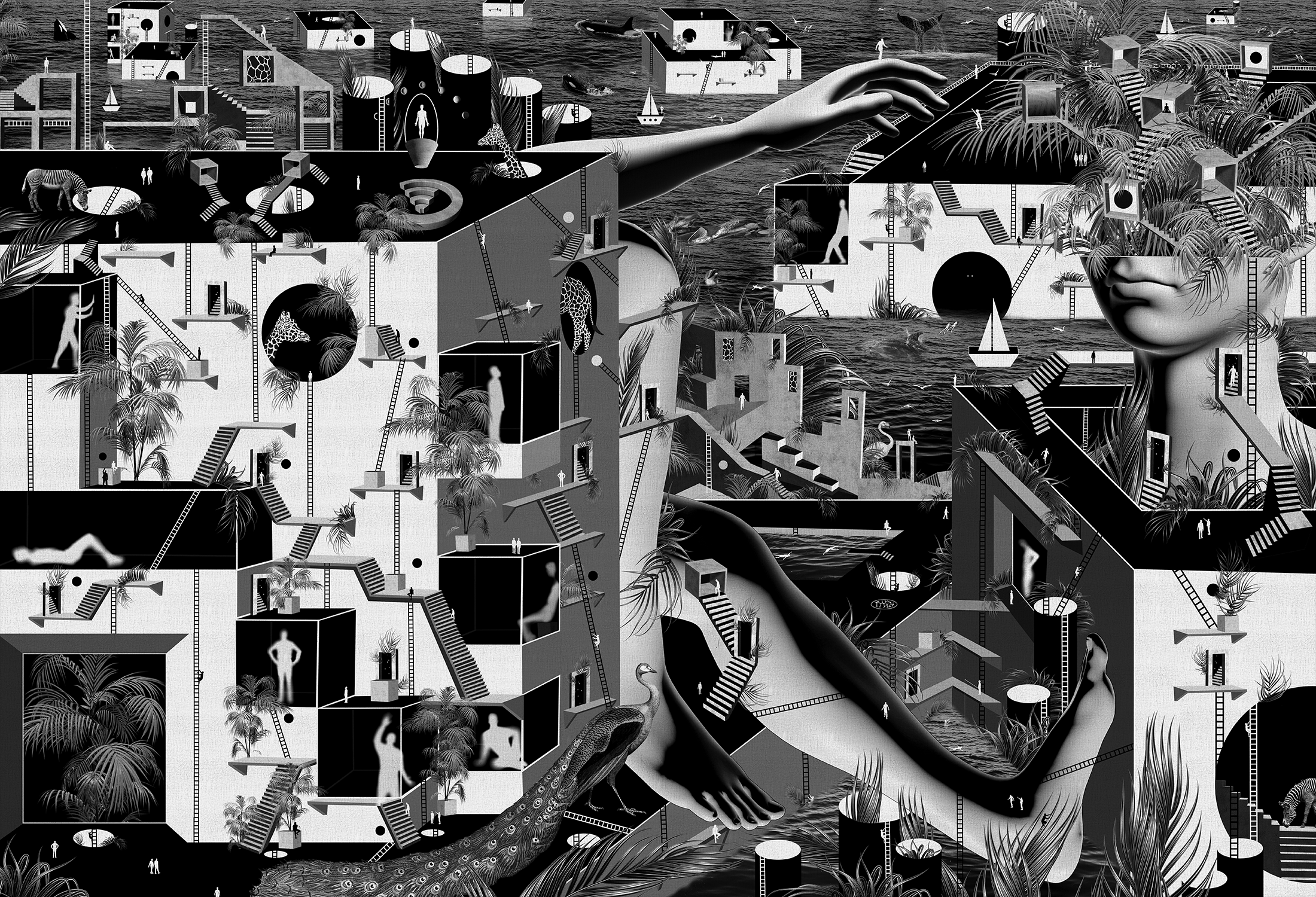 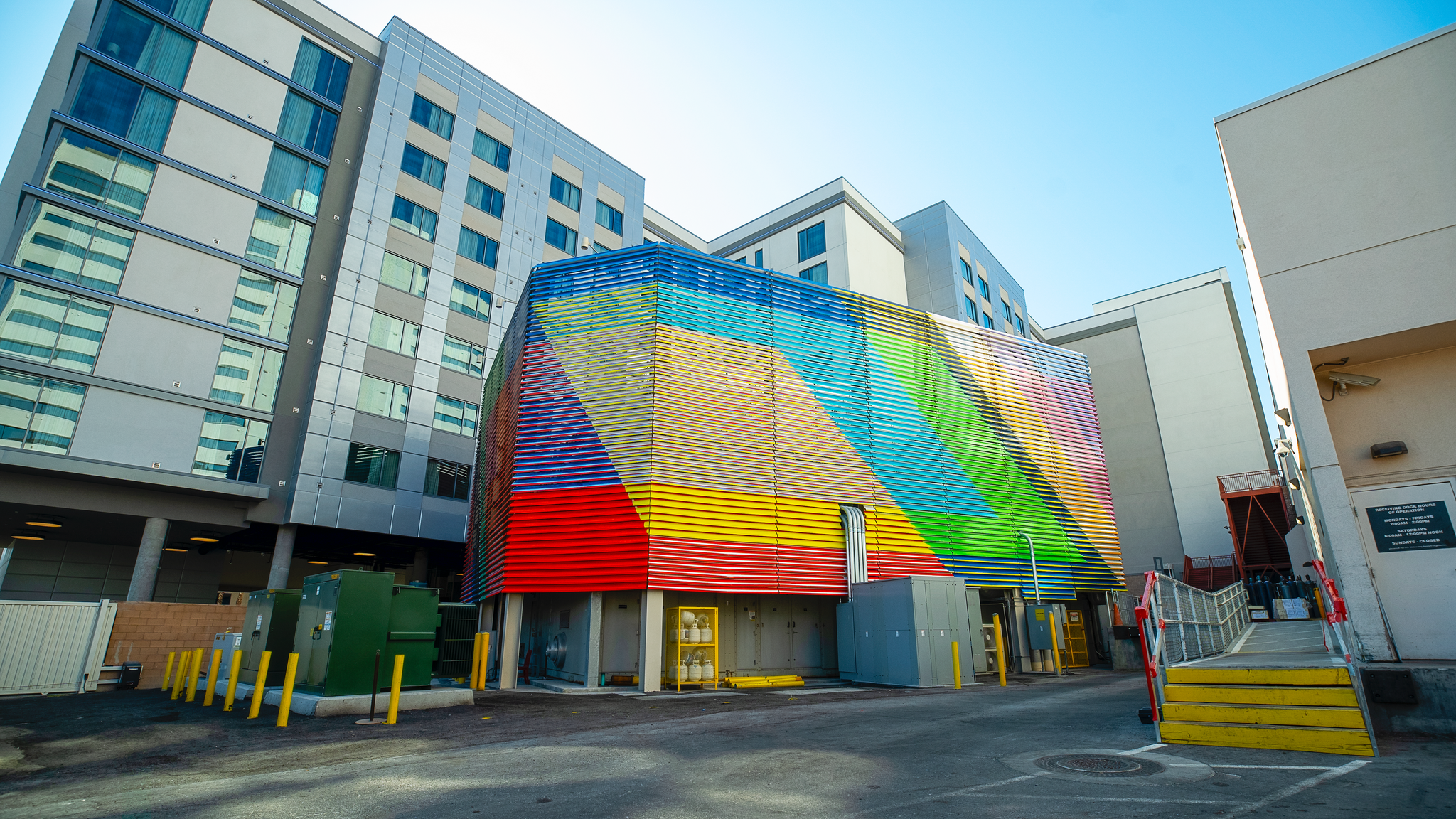 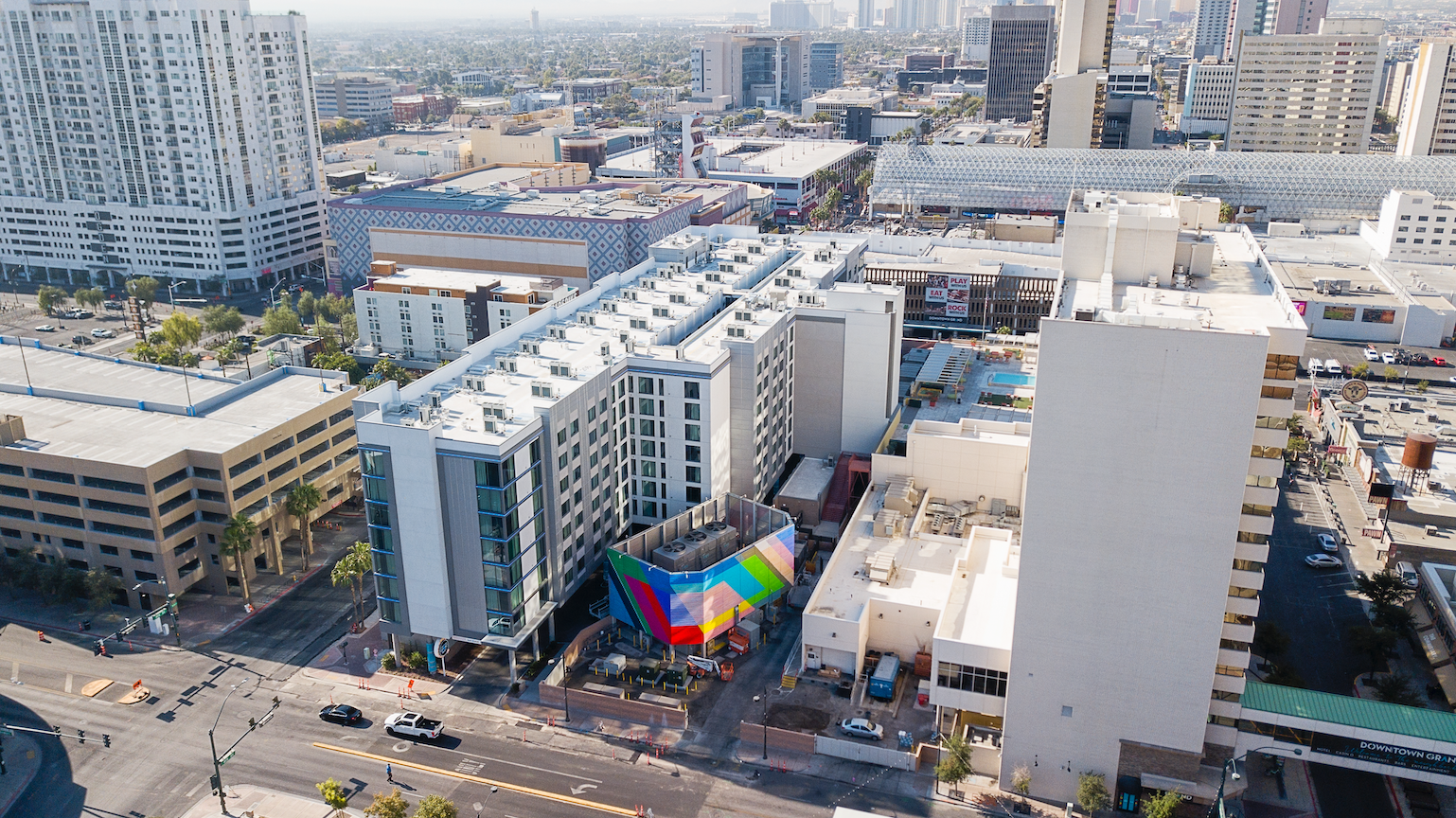 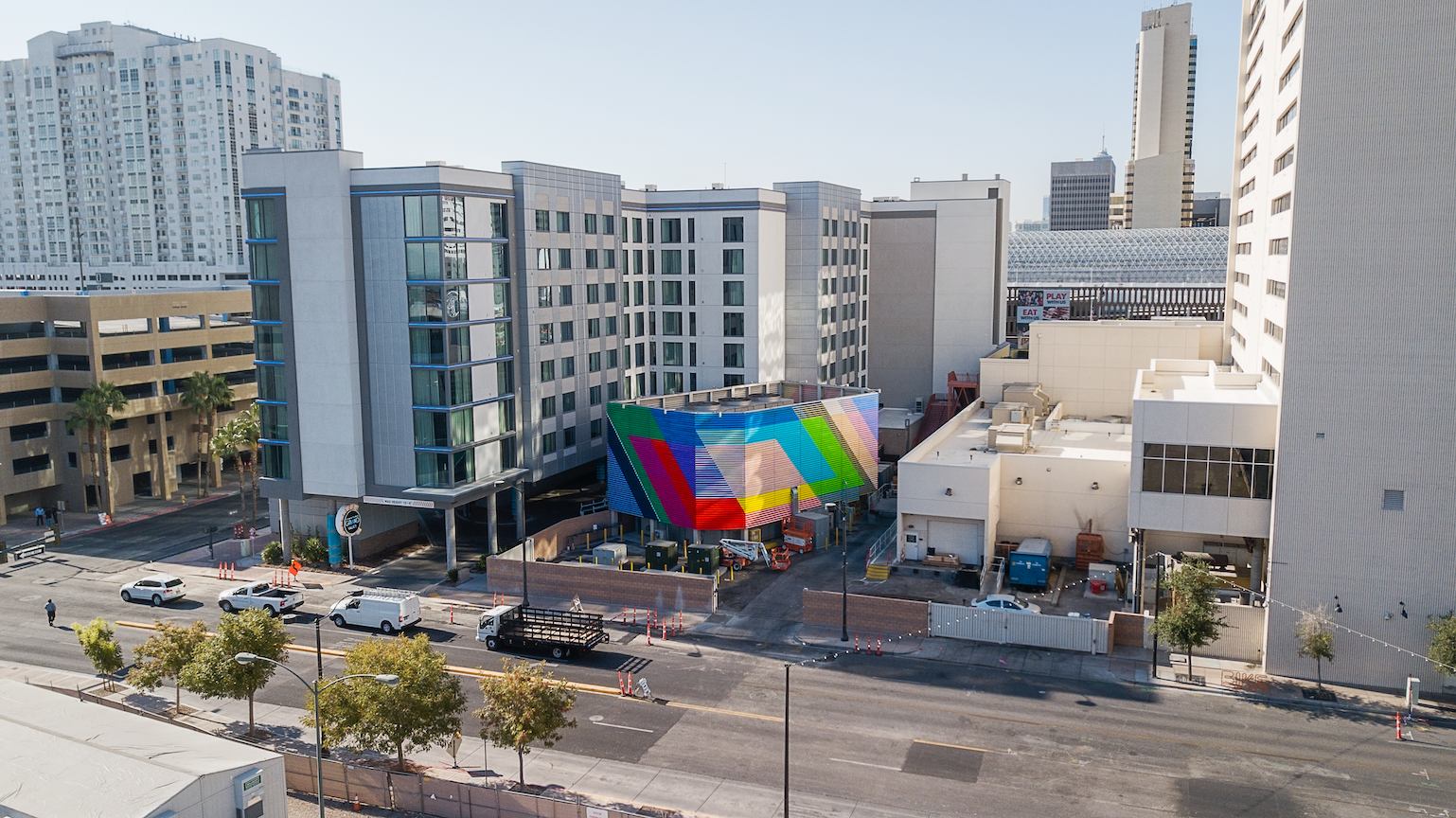 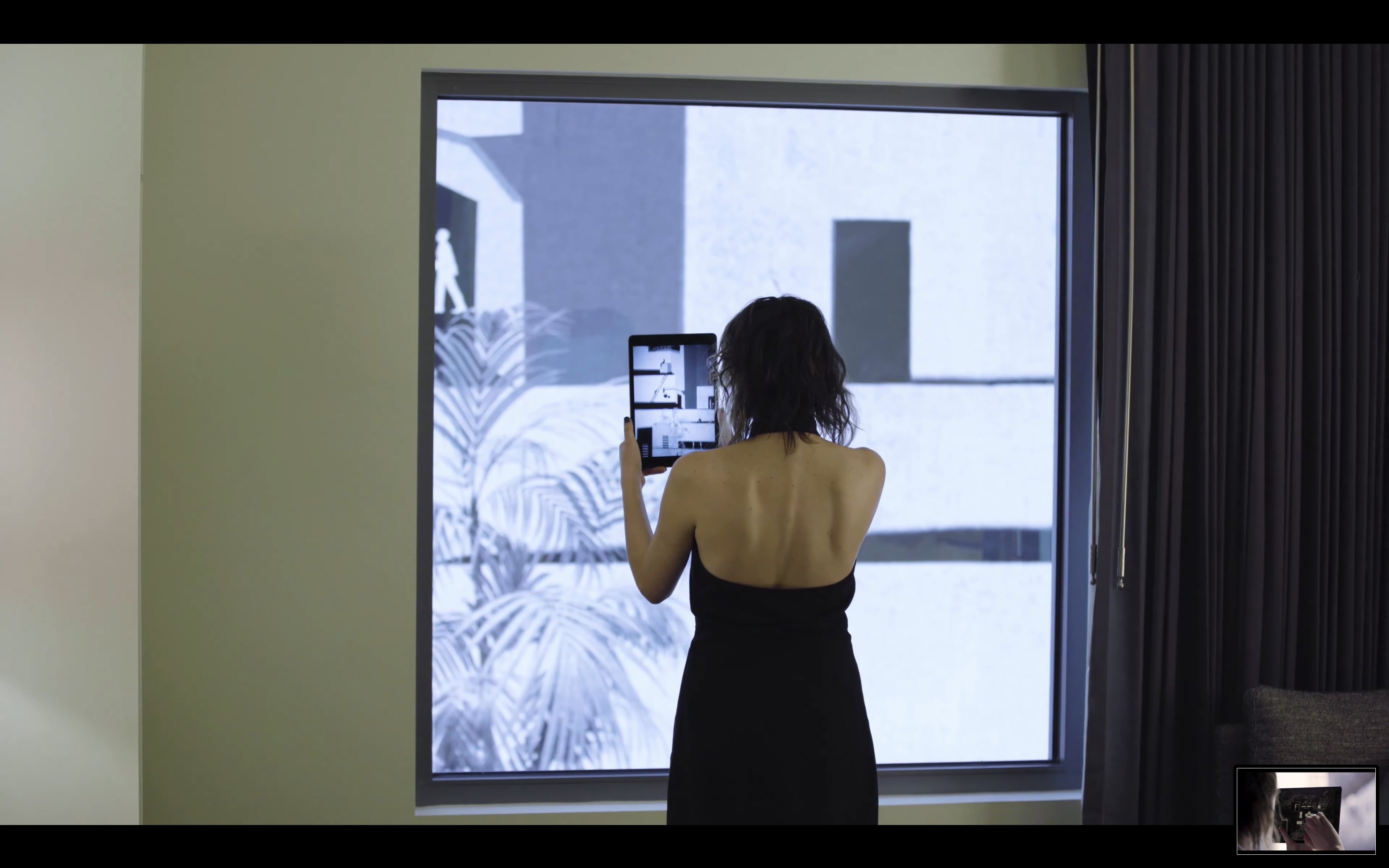 Curated and produced by Building 180, Camila Magrane created Transmigrations, the largest augmented reality mural of its kind. Transmigrations is composed of (2) 75×100’ digital murals that can be seen from 112 of the hotel’s guest rooms in the Gallery Tower. A custom continuation of Magrane’s “Virtual Mutations” series, augmented reality technology is utilized to create an interactive experience. Using Virtual Mutations, a proprietary app created by Magrane for her own works. The mural is positioned for guests to be able to view and interact with the augmented reality features of the artwork just outside of their hotel room window with an iPad.

Simultaneously at the same property, Josef Kristofoletti hand-painted a 5,000 square ft. mural on the hotel’s exterior mechanical building dubbed Slat City, a reference to the thousands of louvered pieces on the building. Working almost primarily overnight to avoid the blazing Las Vegas heat, Josef and his assistant worked tirelessly over the course of 2-months to paint the vibrant and striking mural.

For Transmigrations the goal of this project was to give interior rooms a “view”. We needed to transform the lackluster guest experience of those who stayed in the 112 rooms that faced a plain concrete wall in the interior lightwell into a one of a kind experience. These rooms, which were once the last resort, became an exciting puzzle piece in a much larger masterpiece.

Magrane’s art transformed what would otherwise be an undesirable cement wall view into a destination in and of itself. These rooms, called the virtual experience rooms, are now frequently requested as opposed to avoided.

Josef Kristofoletti’s work served a similar purpose, which was to give new gallery tower guest rooms a better experience. The tower’s exterior rooms face the mechanical building, which is now a colorful attraction.

Slat City is seen from the hotel’s new entranceway and it serves as a welcoming beacon for those coming and going from the hotel and casino.

Building 180 was contacted by Corner Bar Management and CIM Group with the unique and challenging problem faced by the Downtown Grand to create a view from nothing. Building 180 curated the artists for the hotel project and worked closely with them to execute the project along with many other project partners.

Many factors were involved for production, especially with Transmigrations, which uses AR image technology. Not only was there a significant amount of technology that needed to be installed in the guestrooms, but the mural also needed to be installed using a swing stage over a 2-week period. Building 180 coordinated with all parties from the artist, printing company, professional riggers, equipment companies, and the IT team and management.

The iOS app “Transmigrations,” installed on every iPad acts as a translator between the physical mural artwork present in our reality and the digital animations in virtual reality. At a first glance, the app displays a basic camera feed instructing guests to hold the tablet at the center of their room window. Once the camera recognizes the mural, soothing music plays, and animations are overlaid on top of the physical mural image, seen through the camera feed of the iPad.

“Transmigrations” examines the possibility that multidimensional realms coexist simultaneously in a shared space. Unaware of each other, different species and communities subsist in the same territory and time, tuned in only to their individual frequencies, shaped and limited by their own perceptions. They traverse freely without interference and are oblivious to the existence of alternative parallel worlds. Interactivity in art allows viewers to be involved in ways that other art cannot. It creates wonder and playfulness that is so valuable in our lives. Creating meaningful interactive art is a challenge because of the collaborative nature required amongst so many people, but it’s well worth the effort.