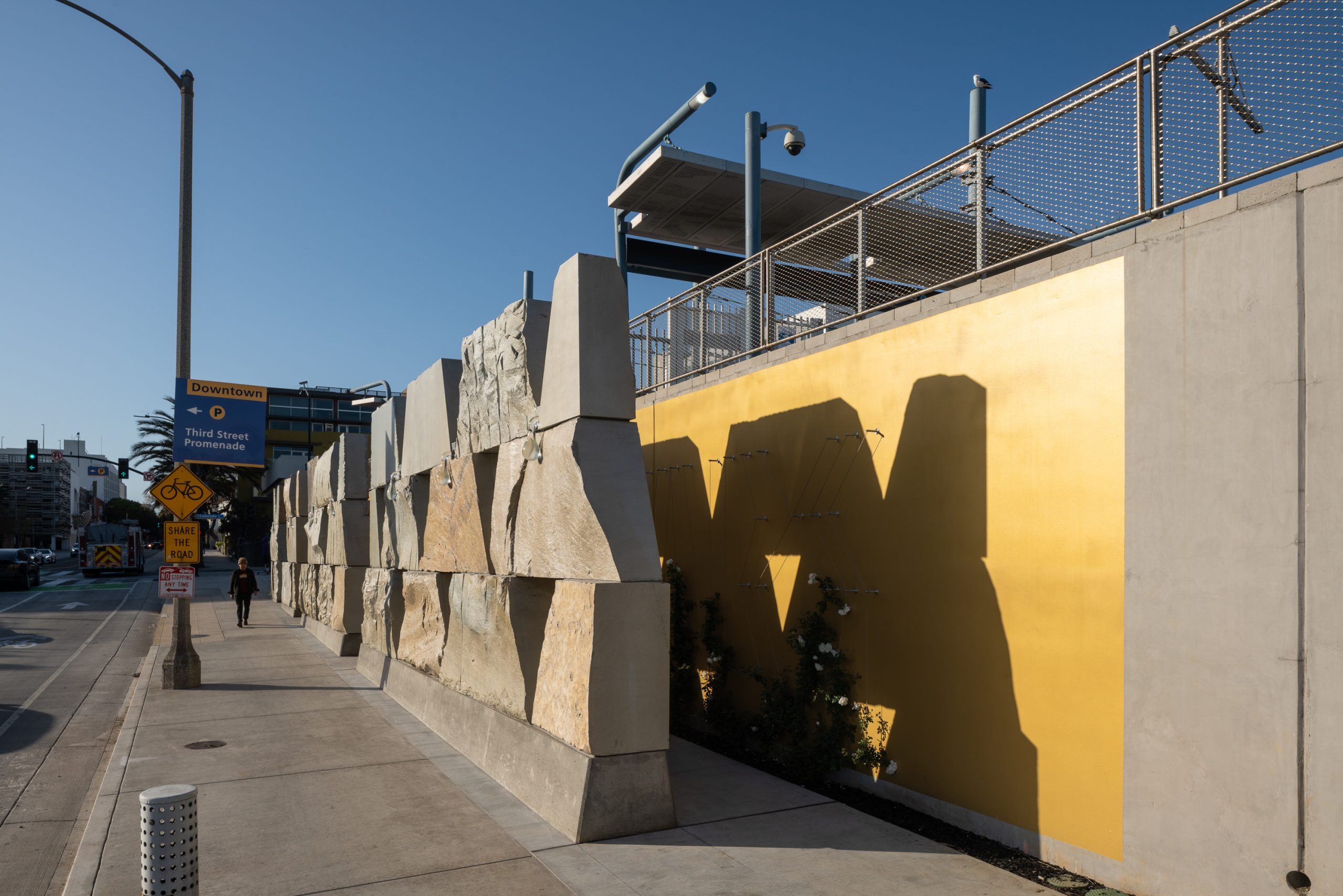 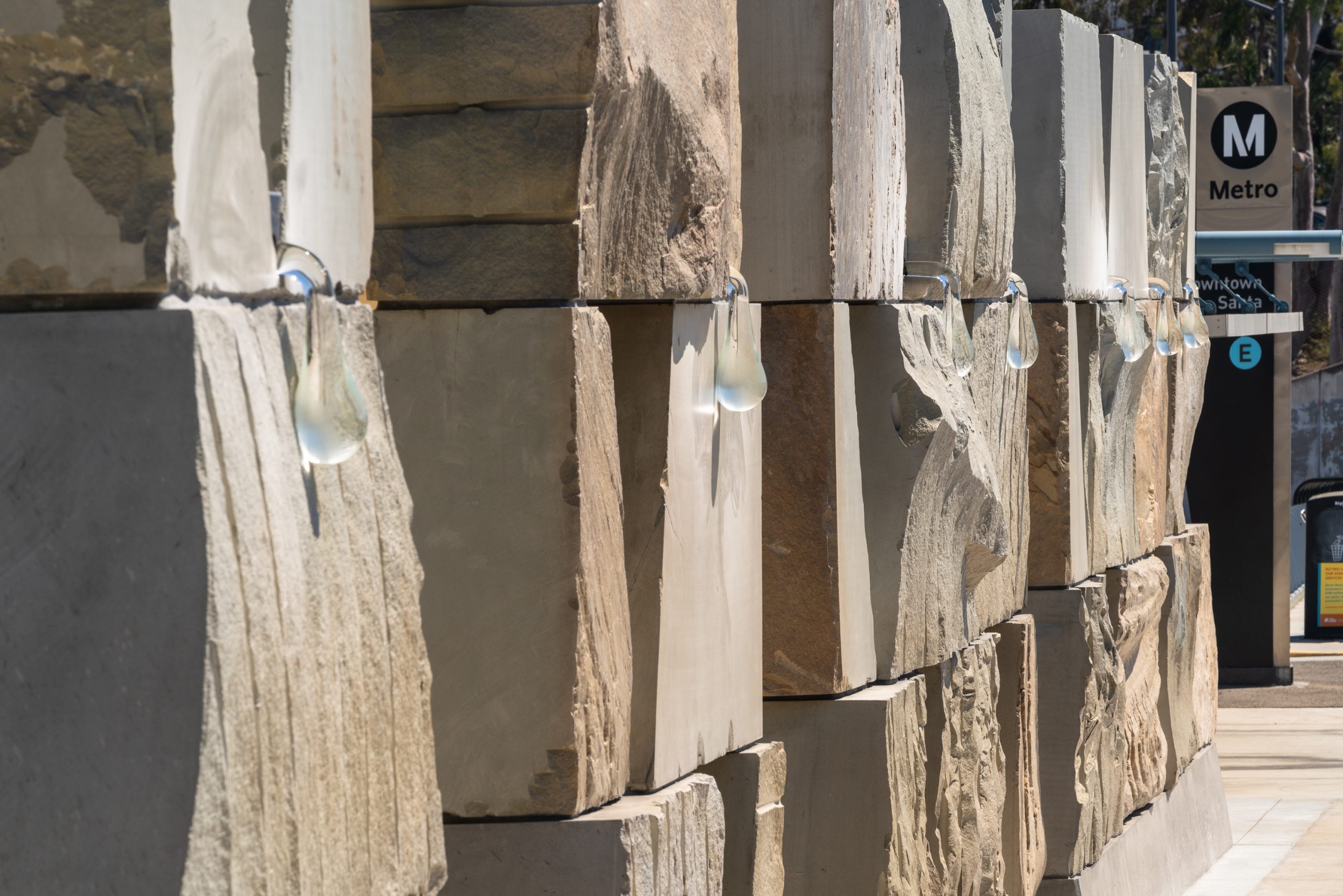 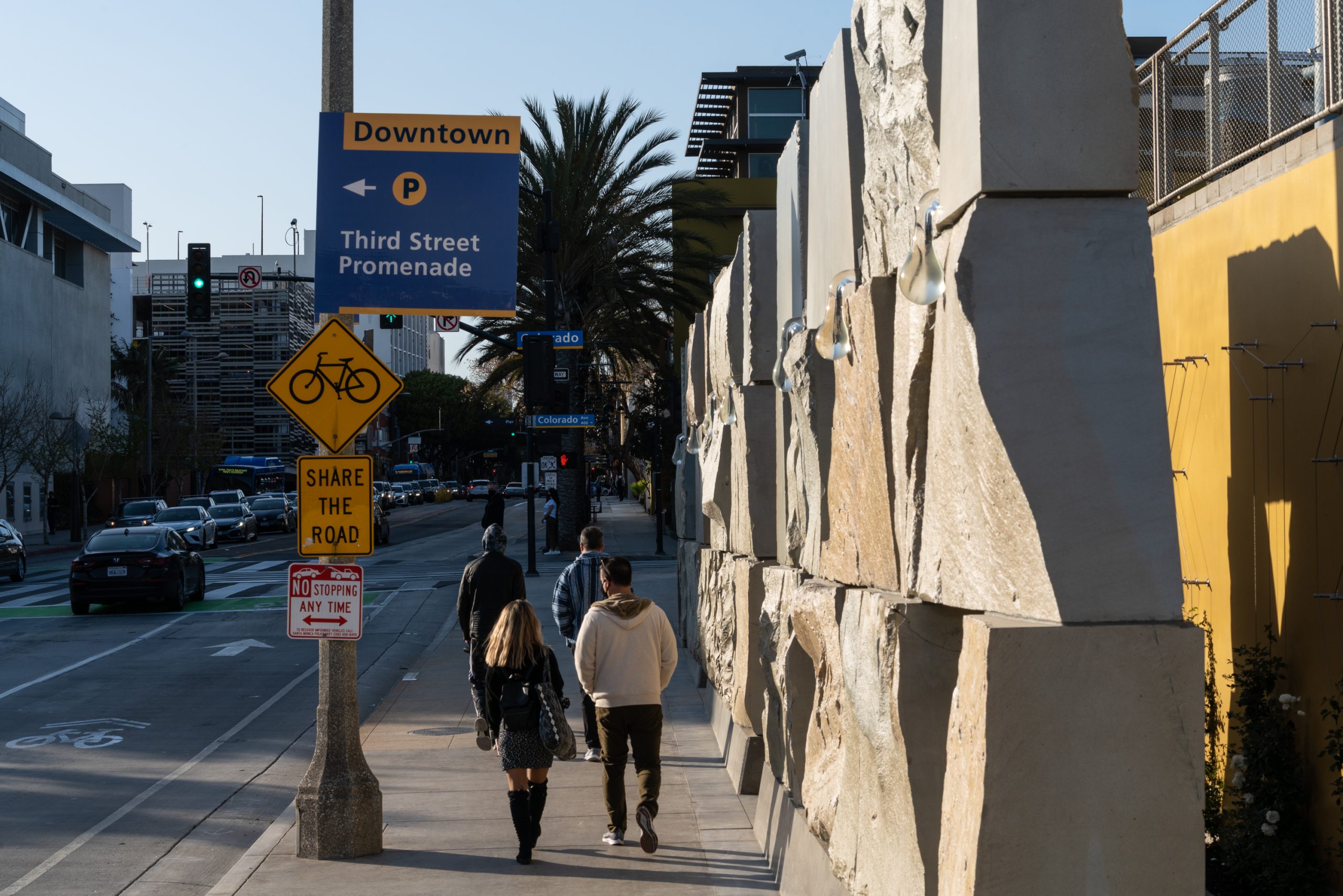 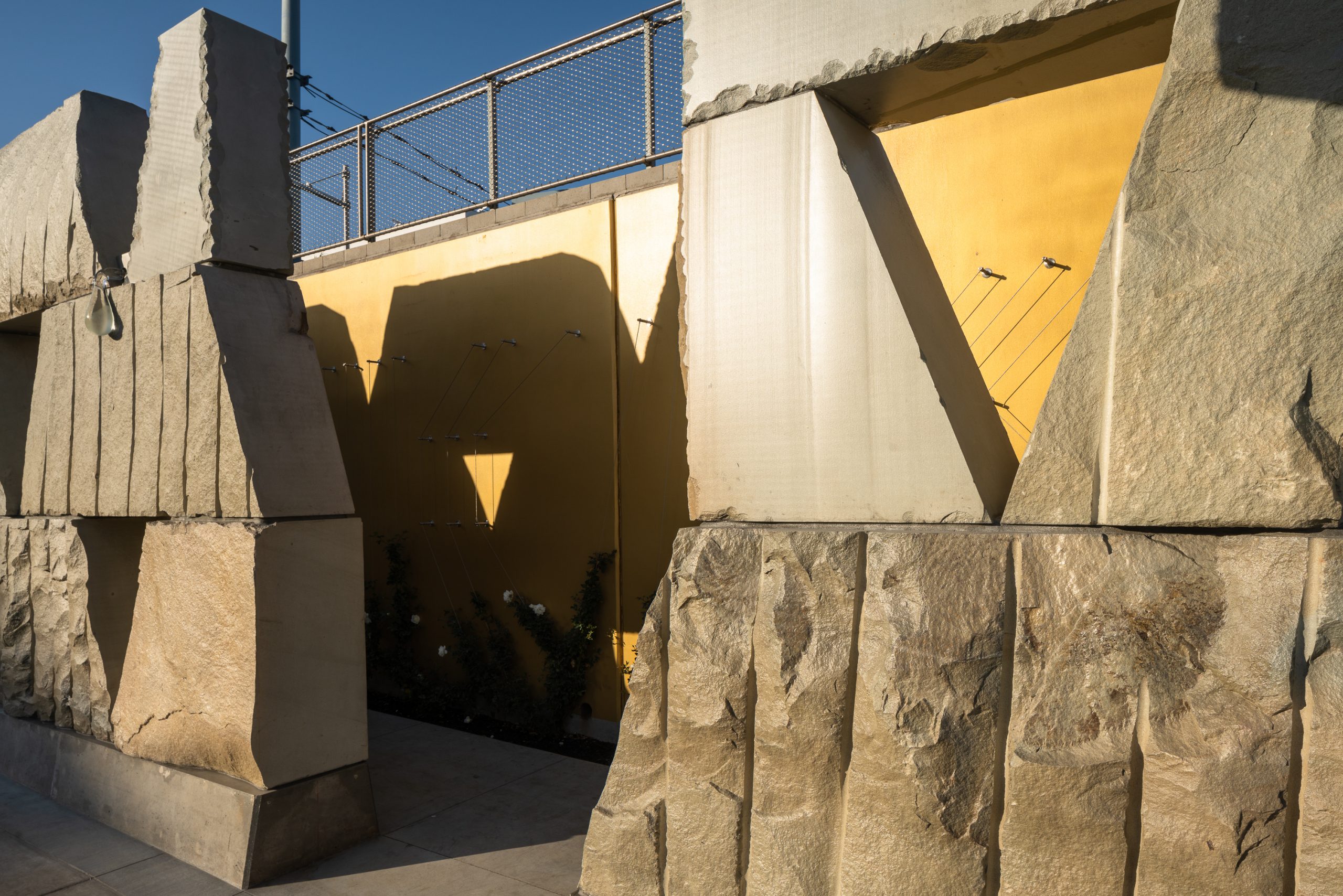 Commissioned by Metro Art for the Downtown Santa Monica Station, “The Crying Rock and Saint Monica” by Walter Hood illuminates geological and cultural history of Santa Monica. Saint Monica, the “weeping saint,” was said to have shed tears over her son Augustine’s hedonistic lifestyle. Father Juan Crespi was reminded of her eyes when he saw a pair of sacred springs, named Kuruvungna by the native Tongva tribe, at what is now the border of Santa Monica and West Los Angeles.
While the Spanish missionaries associated the watery tears with Saint Monica’s motherly frustration, Tongva elder Julia Bogany recalled the story of The Crying Rock, which references the painful memory of lives taken during Spanish colonization. The story is one of grief but also of Tongva resilience. The artwork holds these personifications of nature and remembrances in parallel. Water has shaped the geology of Santa Monica, eroding the sandstone at the coastline while giving life to the Tongva and settlers.
Weighing up to 10,000 pounds each, the sculpture’s stones and hand-formed glass recall Saint Monica, the Kuruvungna Springs and the sandstone Palisades. Gold paint and climbing roses adorn the station wall, inviting pedestrians to weave through the sculpture and feel the awe of nature and heft of memory.

The project team and community-based artist selection panel sought to commission a site-specific iconic artwork that would punctuate the E Line rail transit corridor at the terminus station in Santa Monica and uplift the rider and pedestrian experience on this city-adjacent Metro property. Site-specificity manifested in multiple ways: as a complementary counterpoint to the station architecture and Santa Monica streetscape design; and as a visualization of the often overlooked geology and cultural history of place, now brought to the center of Downtown Santa Monica. Though the artwork is monumental in scale, with a commanding presence from afar, “The Crying Rock and Saint Monica,” creates a sidewalk space that encourages viewers to slow down, witness the texture of the stone, the refraction of light through the glass tears, the glow of the gold paint and delicacy of the white roses in an intimate way. This invitation to slow down is also an invitation to consider the complexity of history, the beauty of nature and our connection to the places we traverse.

Metro recognizes that the inclusion of art and artists in the design of public spaces enhances the transit environment, enlivens the public realm, and creates site-specific cultural landmarks. With this foundational belief, Metro Arts & Design, worked closely with the artist and Metro Program Management to identify the ideal artwork opportunity including the prominent and accessible location, at the transition between the rail station and Santa Monica’s downtown, pier and coastline. Given the monumental scale and the varied materials of artwork, the project required close coordination between the artist, engineer, fabricators as well as the installers, Metro Arts & Design, Metro Construction Management and the City of Santa Monica, whose shared appreciation for the broad vision and ambition of the artwork fueled detailed attention to each element so that they would unify seamlessly for the public.

Walter Hood is the Creative Director and Founder of Hood Design Studio in Oakland, CA. He is also a professor at the University of California, Berkeley and lectures on professional and theoretical projects nationally and internationally. Hood Design Studio is a tripartite practice, working across art + fabrication, design + landscape, and research + urbanism. The resulting urban spaces and their objects act as public sculpture, creating new apertures through which to see the surrounding emergent beauty, strangeness, and idiosyncrasies. The Studio’s award winning work has been featured in publications including Dwell, The Wall Street Journal, The New York Times, Fast Company, Architectural Digest, Places Journal, and Landscape Architecture Magazine. Walter Hood is also a recipient of the 2017 Academy of Arts and Letters Architecture Award.