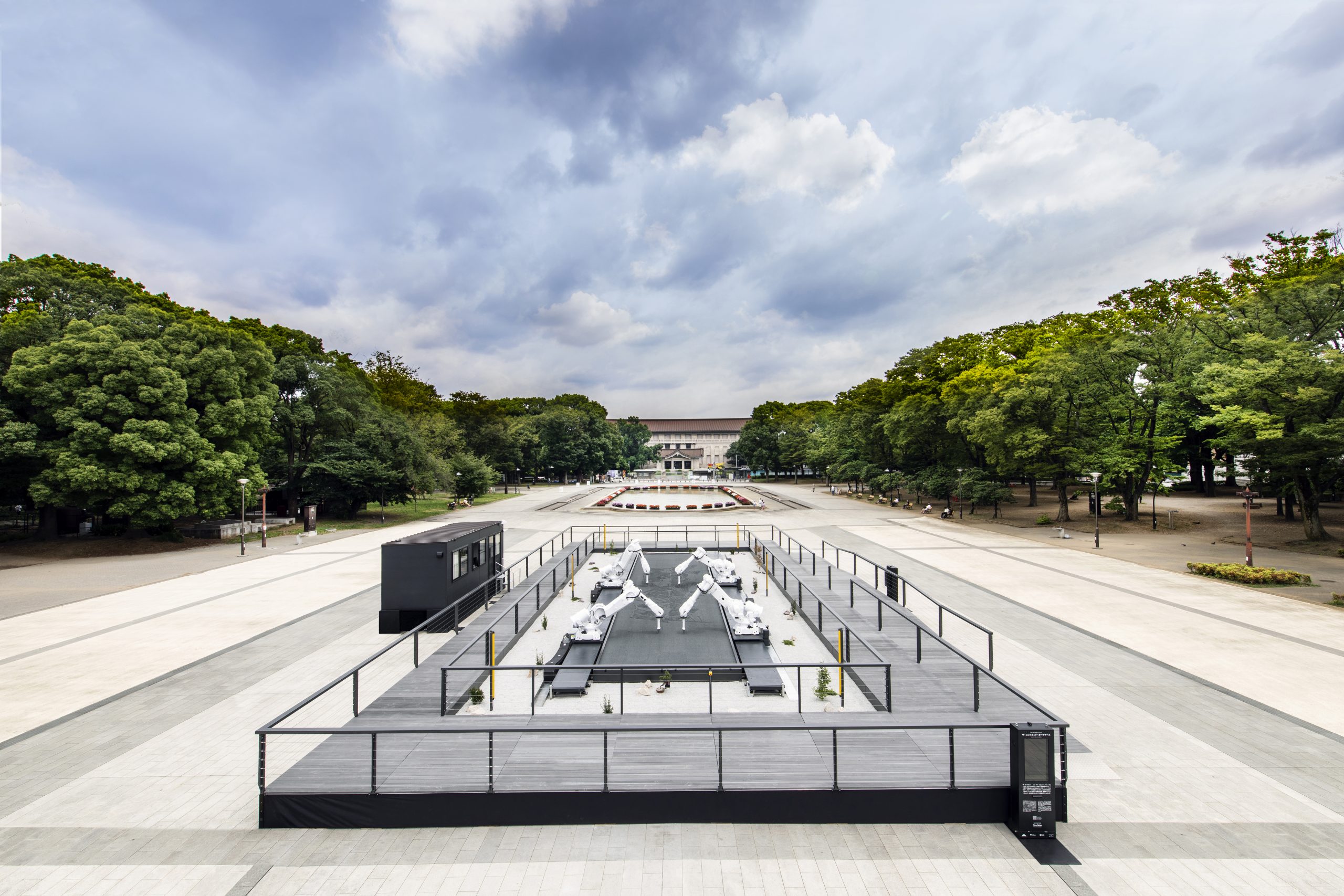 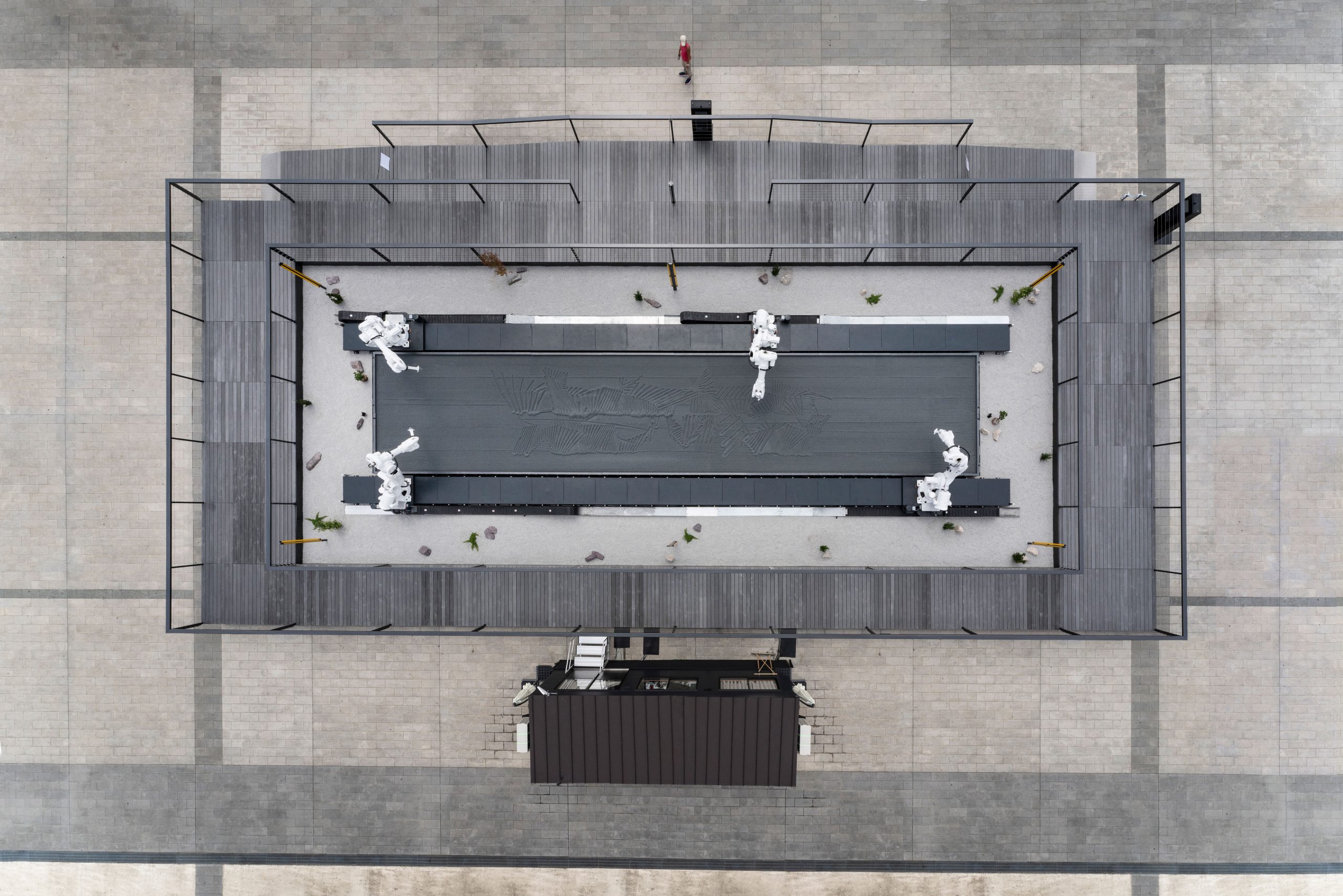 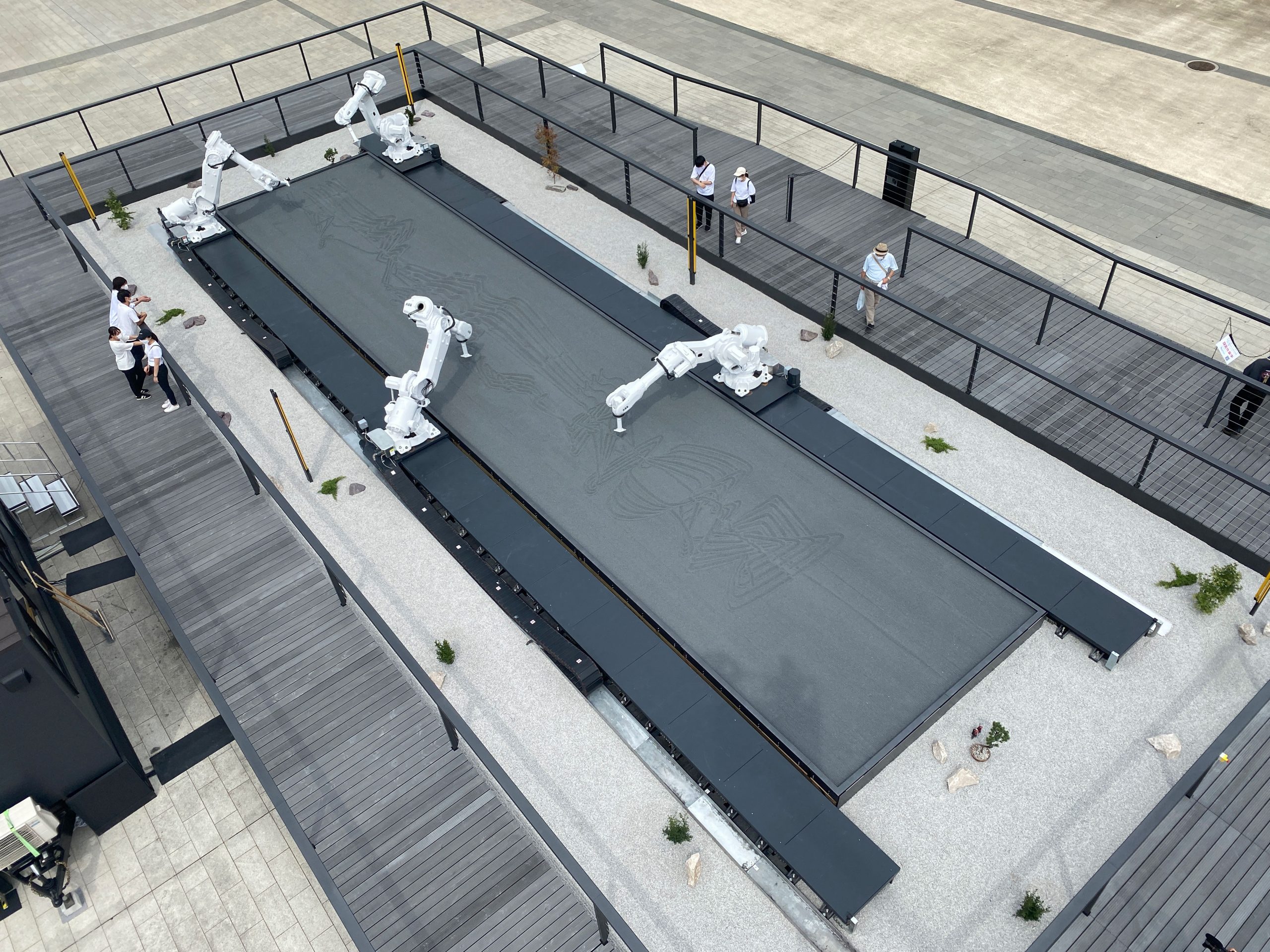 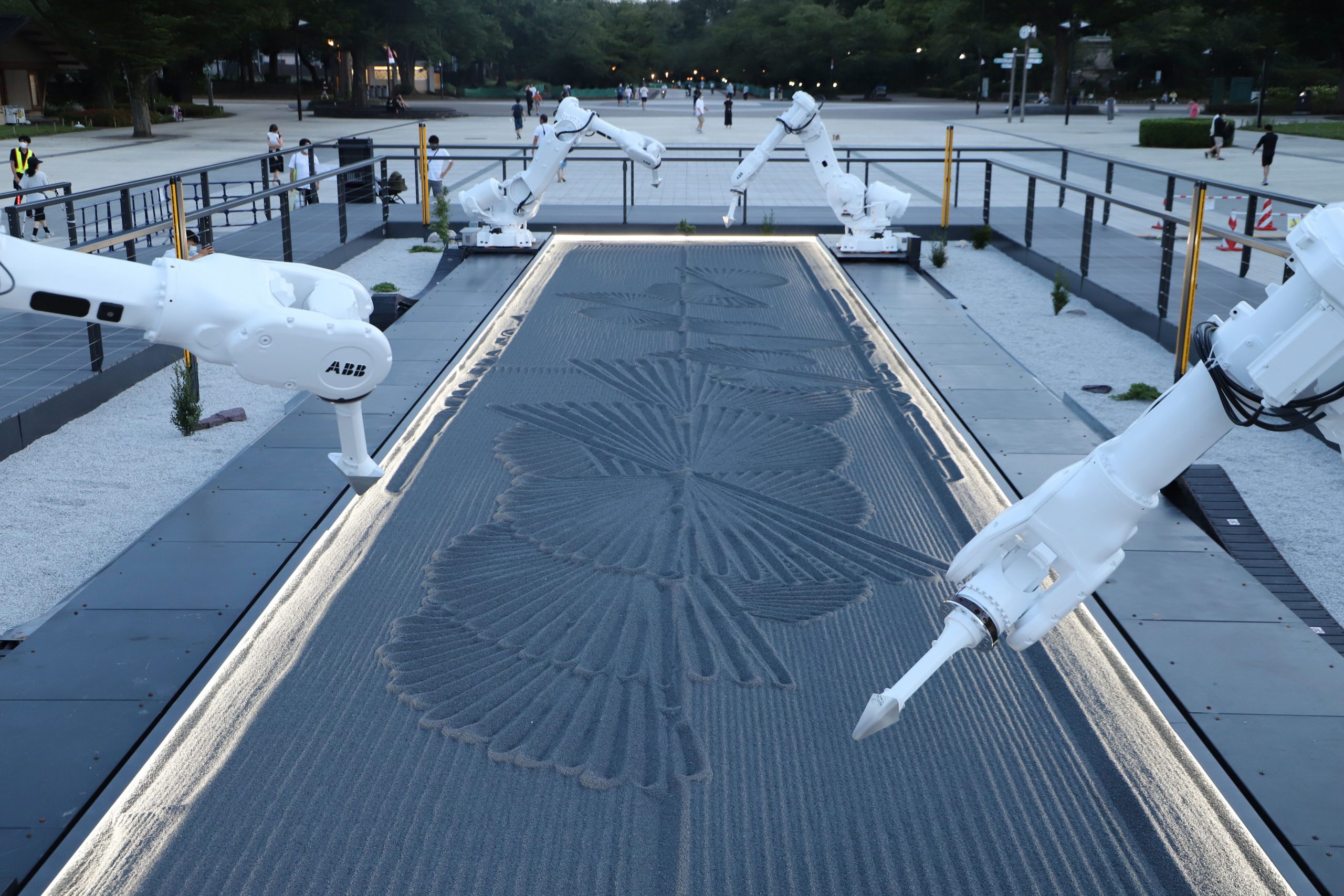 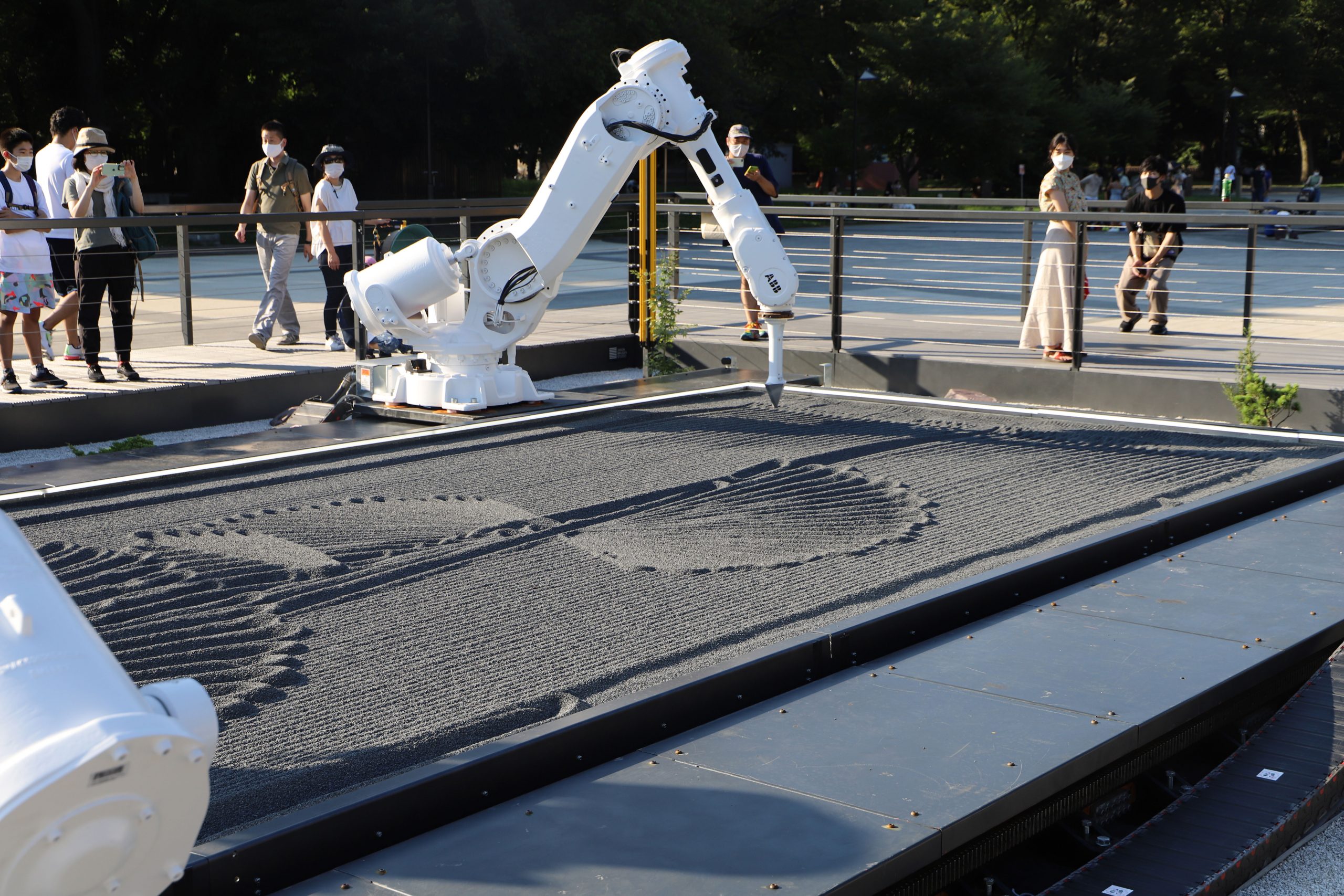 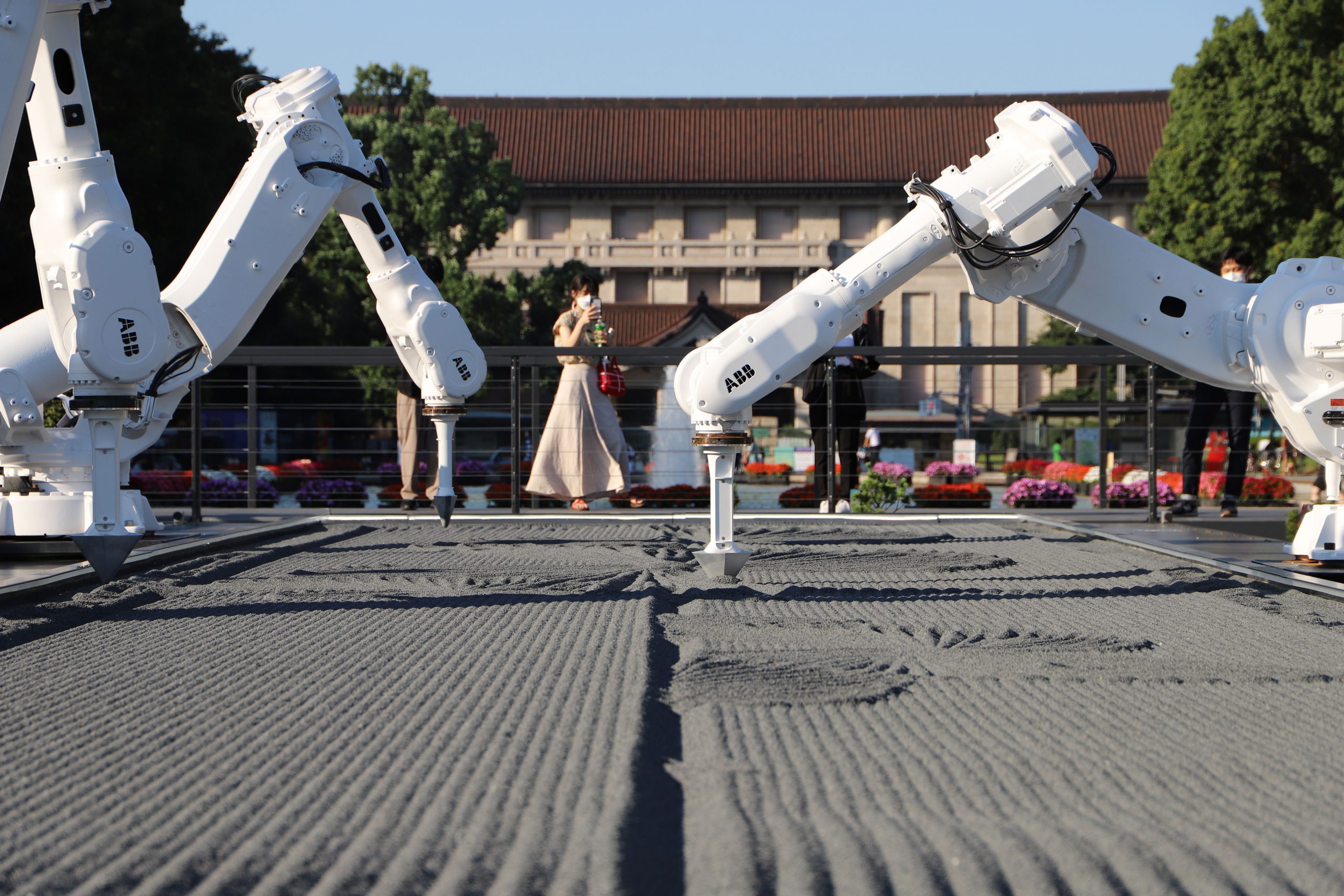 Taking inspiration from a traditional Japanese Zen Garden, four industrial robot arms were poised around an expansive gravel canvas before they awakened and started to rake the surface. In a series of daily performances, these ‘gardeners’ worked together to create unique, evolving illustrations representing the movements of athletes. Generated by a series of bespoke algorithms, that analysed video footage of Olympic and Paralympic events, some illustrations depicted a movement unfolding over time while others shone a light on one spectacular sporting moment.

A meditation on tradition, craftsmanship and the evolving roles of technology, the installation offered visitors a peaceful space for quiet introspection.

The Constant Gardeners launched in Ueno Park, Tokyo, on the 28th July 2021 and ran until the 5th September 2021 to coincide with the Tokyo 2020 Olympic and Paralympic Games.

The Constant Gardeners was the result of an open call issued by Arts Council Tokyo in 2018. The original brief asked for a monumental, temporary public artwork that would coincide with the Tokyo 2020 Olympic and Paralympic Games. Against the backdrop of this exciting sporting event, Arts Council Tokyo required an exhilarating artwork that would engage and inspire large audiences. As part of the Tokyo Tokyo FESTIVAL cultural programme, the brief outlined three key aims, to have impact, be accessible to all and to expand the potential of the arts.

A boundary-pushing project, The Constant Gardeners aimed to inspire new applications for industrial robotics within art contexts and urban environments. Bringing robotic arms out of the factory, into settings where they encounter members of the public, it provided a unique opportunity to consider the evolving roles of machines. Employing the technology in a meditative context, The Constant Gardeners aimed to offer a vision of the future where man and robot work together to elicit positive change.

The Constant Gardeners was created via an open, experimental process. Idea development was led by physical prototyping and collaboration across the international, multidisciplinary team at every stage. Regular workshops and feedback sessions were used to support the evolution of ideas bringing stakeholders, client and design team together during the creative journey.

The designers and creative technologists at JBS had to undertake extensive research and development, to establish a language of mark-making that would be in keeping with the traditional aesthetics of a Zen garden. Eventually, the team settled on two main techniques that rely on a combination of computer vision and artificial intelligence to extract movement data from video footage. 'Pose estimation' was used to recognise and track joints, and 'background subtraction', mapped the outline of an athlete over a series of keyframes.