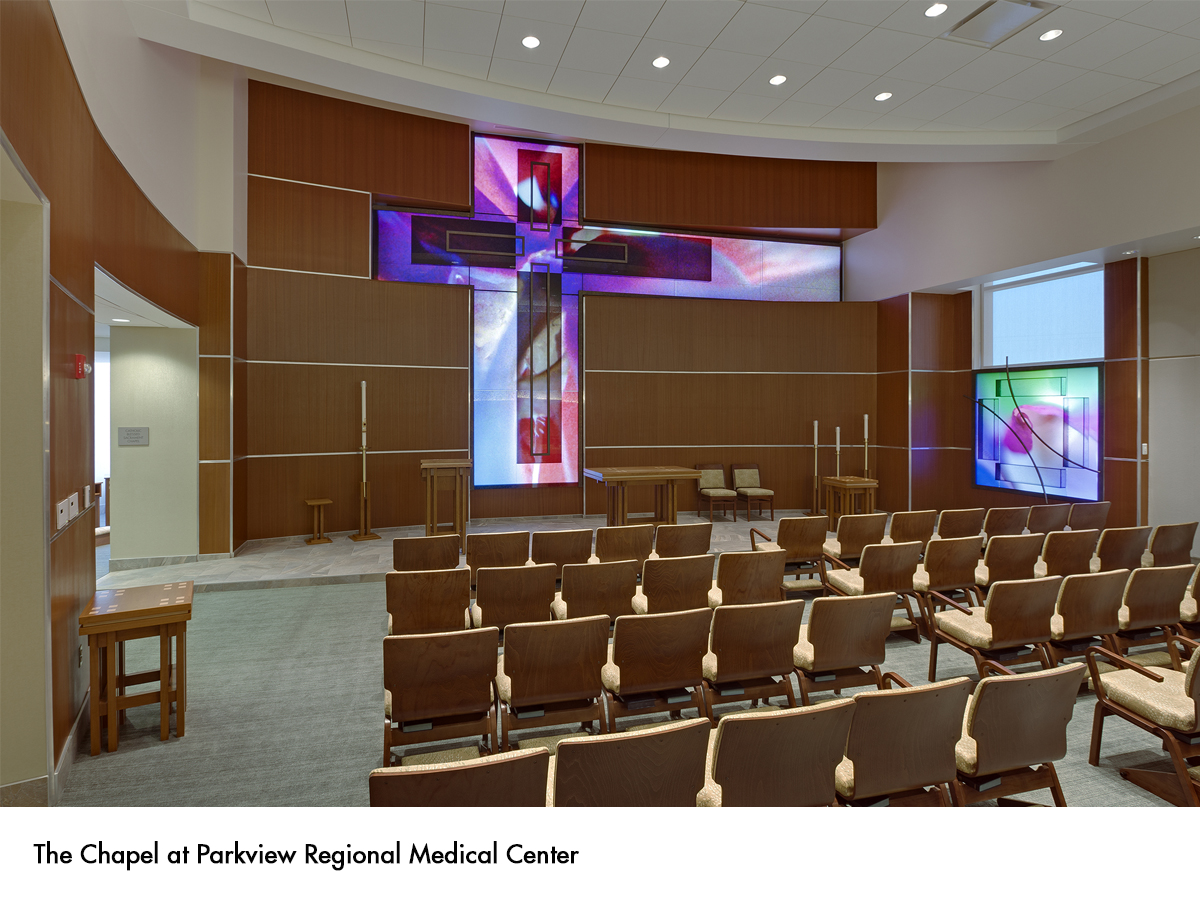 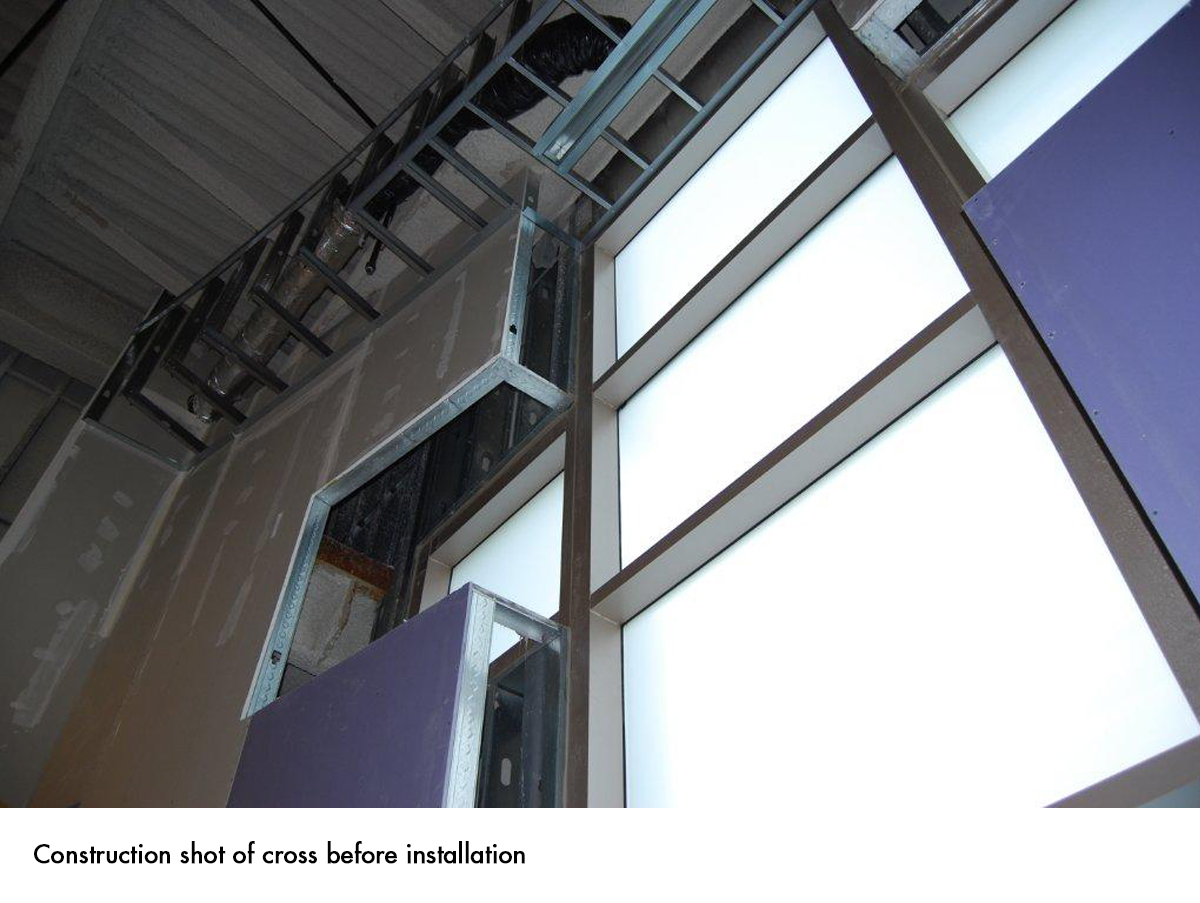 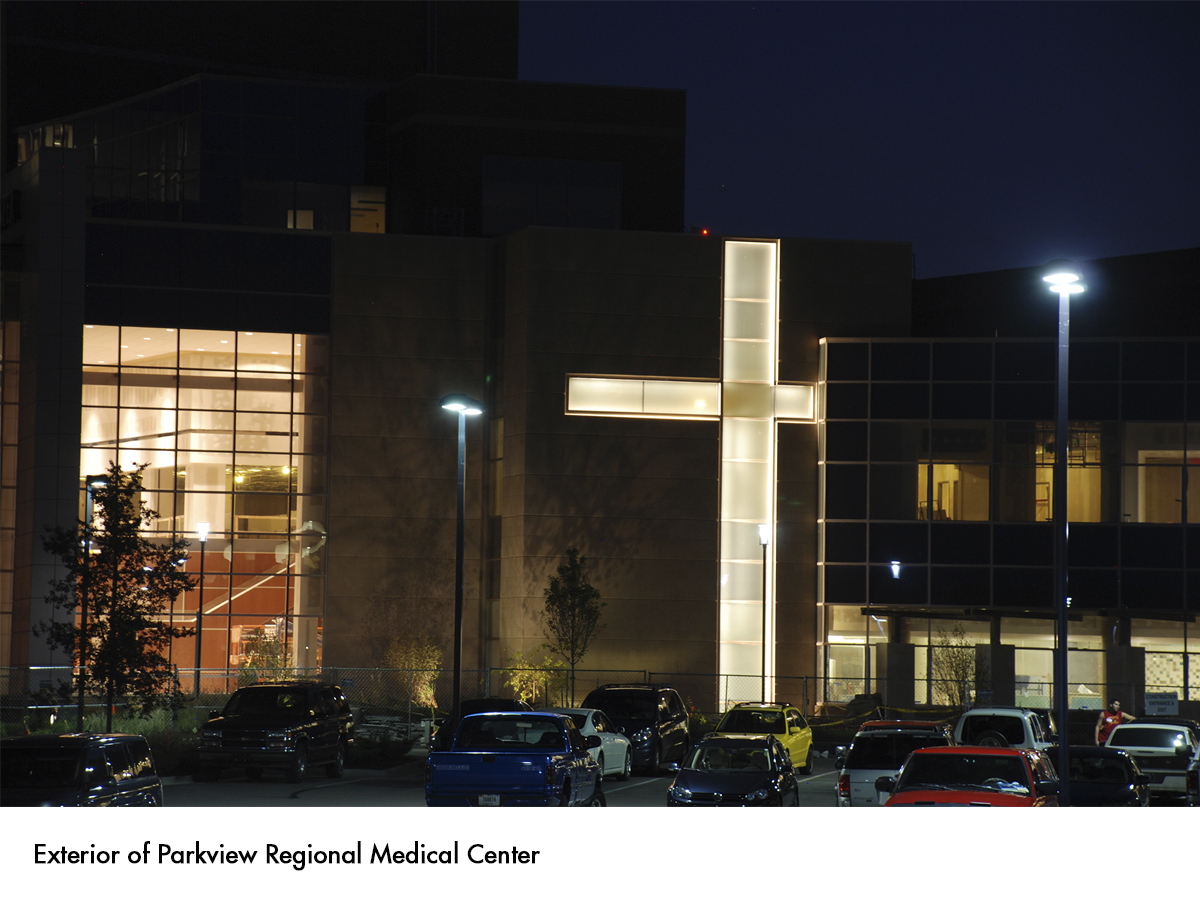 To minister to the spiritual needs of patients from different faiths at Parkview Regional Medical Center, while honoring the hospital’s Methodist affiliation, the chapel features an integrated cross-shaped window spanning most of the wall behind the dais, 24 feet wide and 16 feet tall. Laminated art glass was installed into the window space in a style that is contemporary and inclusive, to support a place for quiet contemplation and prayer that is welcoming to all visitors. Brilliant tones of violet and pink are balanced with subdued slate grey and pale blue, all derived from a highly-magnified photograph of an iris.

The chapel’s need for commissioned glass art arose from the unusual shape of its bisecting windows, an architectural feature visible from outside the building as an intersection of long channels that both span and break up the volume of multiple floors. A previous attempt with white frosted glass resulted in a look that was too austere and cold, so an artists was sought who could accomplish several goals at once: to adapt to the unusual parameters of the architectural details, to establish a warm tone of comforting and prayerful contemplation, to honor the hospital’s Christian identity, and also to make the chapel welcoming and nonexclusive. At night, the exterior presents as an illuminated cross-shaped highlight within the architectural features of the building, a quiet testament to the hospital’s founding mission. The result is a colorful glass installation that does not carry the historical or sectarian weight of traditional stained glass.

Hospital chaplain Ann Steiner-Lantz had worked with Kenneth von Roenn on another project previously and recommended him again, trusting his design-sense implicitly. Guided by Charles White at Skyline Art Services, Von Roenn corresponded directly with Steiner-Lantz and completed a maquette to show how his proposal would fit the unusual, asymmetrical space. He was also able to extend his design intervention to a second, six foot square window on a side wall with an unsightly view of a parking area. A magnified rose image in that window is broken up by rectilinear glass boxes and curved metal rods, a counterpart to the cross shape suggested by similar elements in the primary window. Von Roenn’s design also suited and complemented the rest of the hospital’s art program.