The Cathedral Of Thorns Curacao - CODAworx 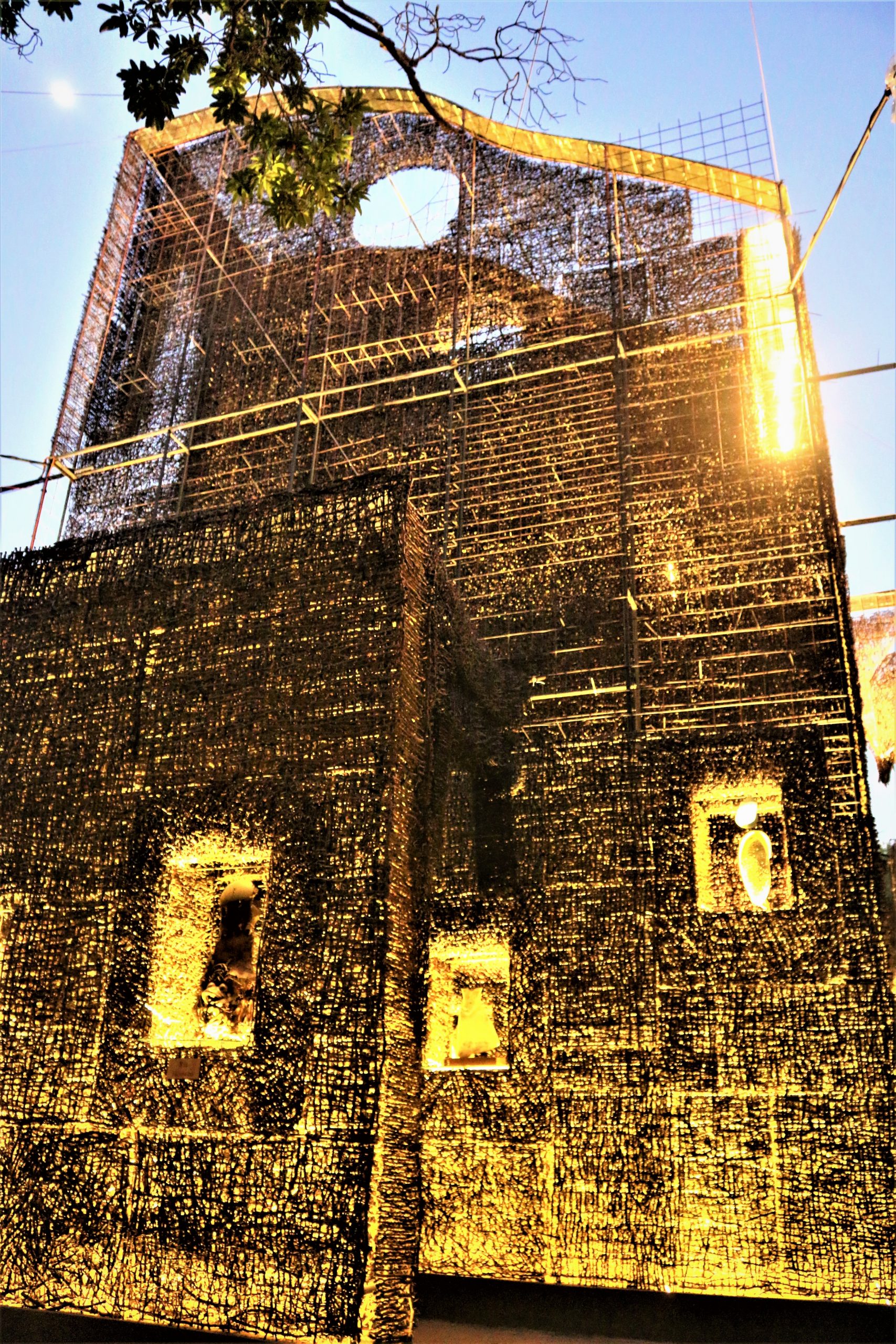 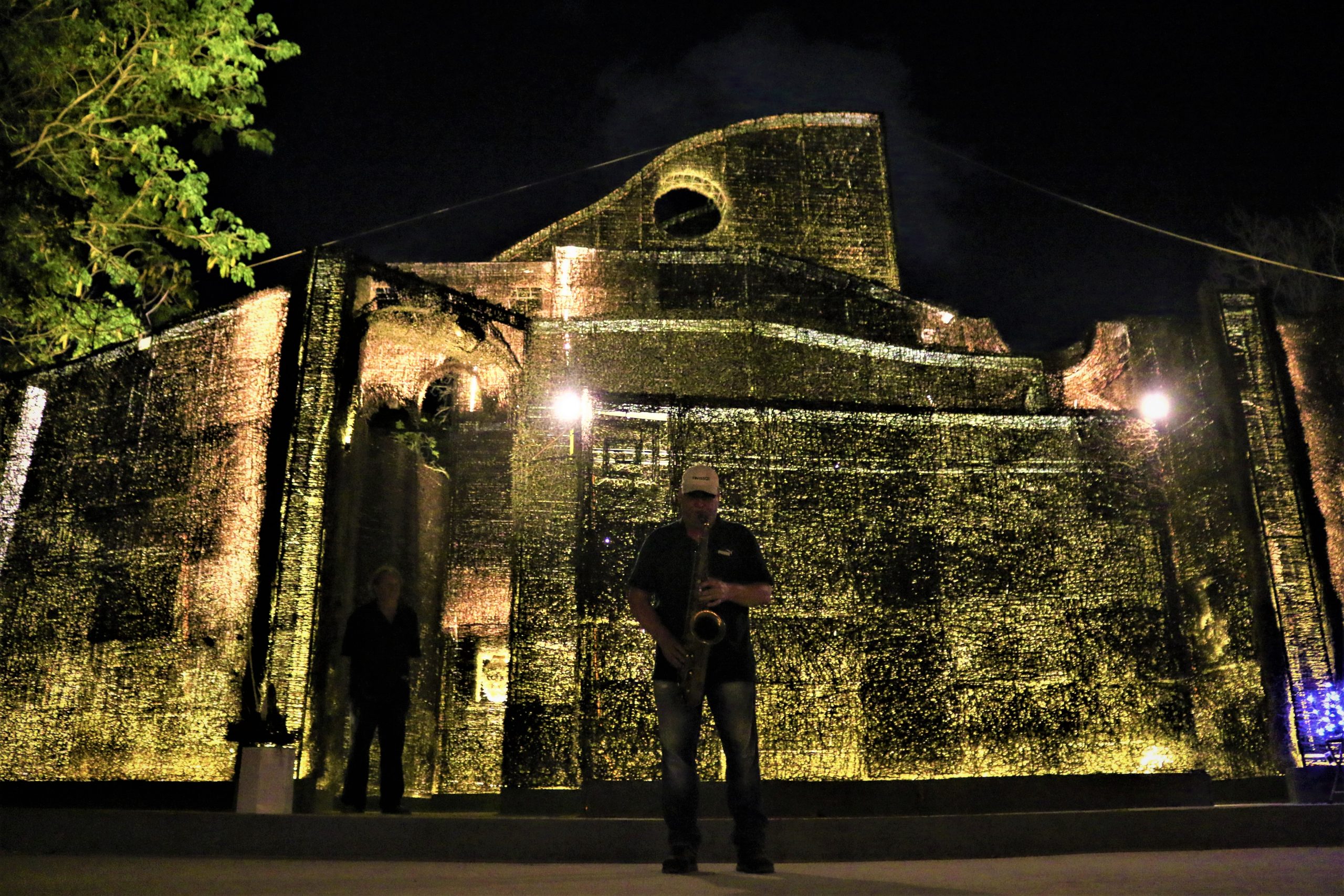 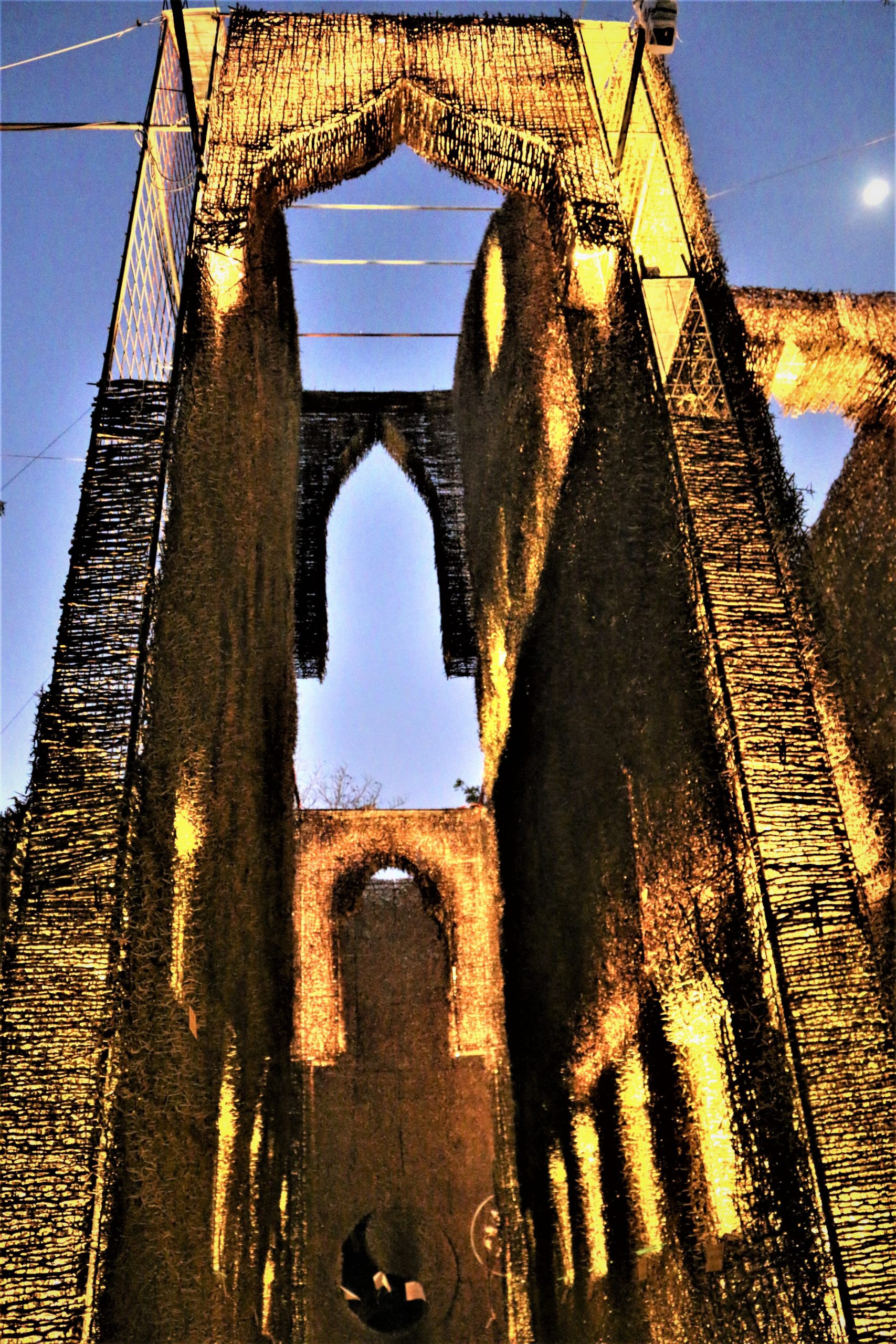 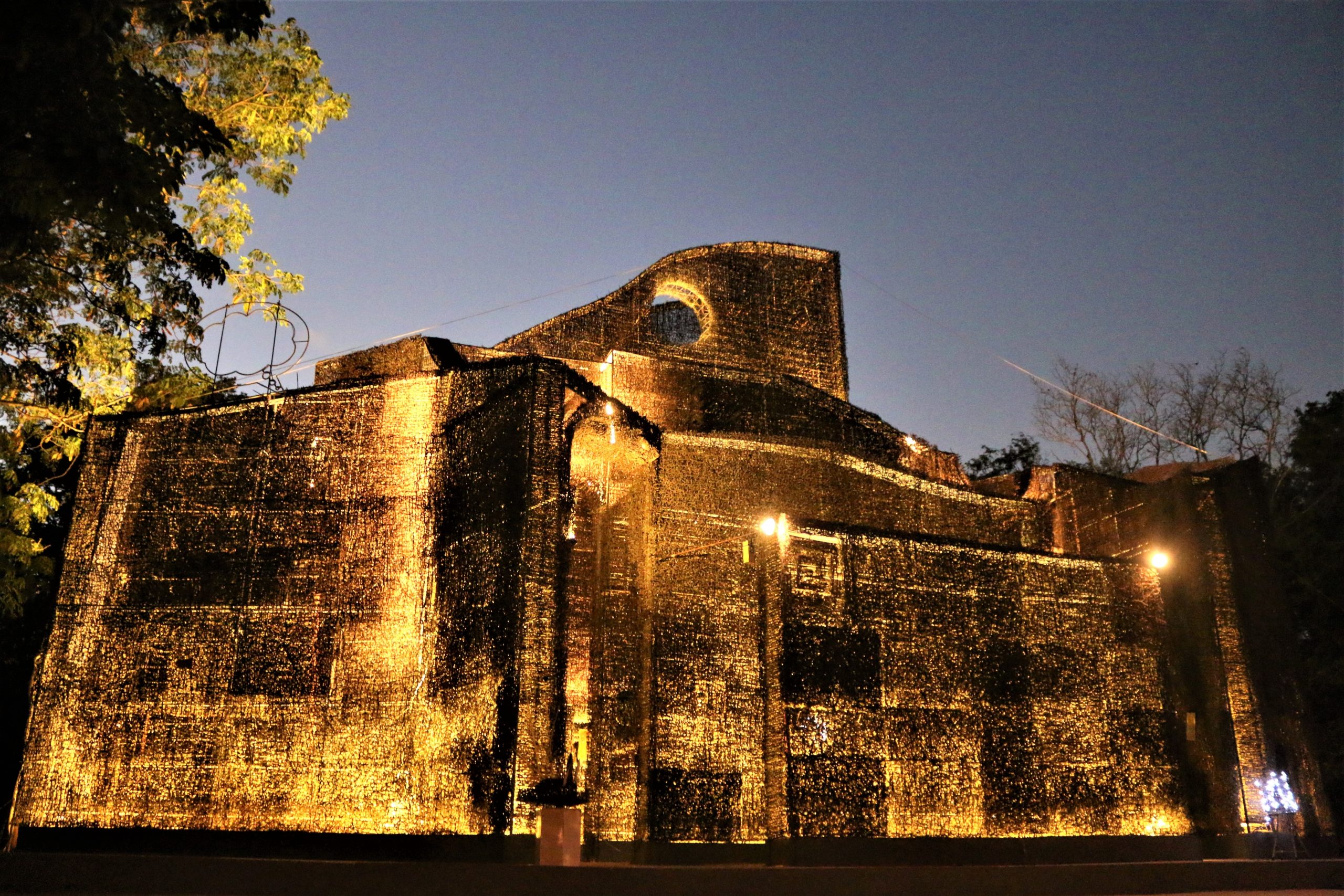 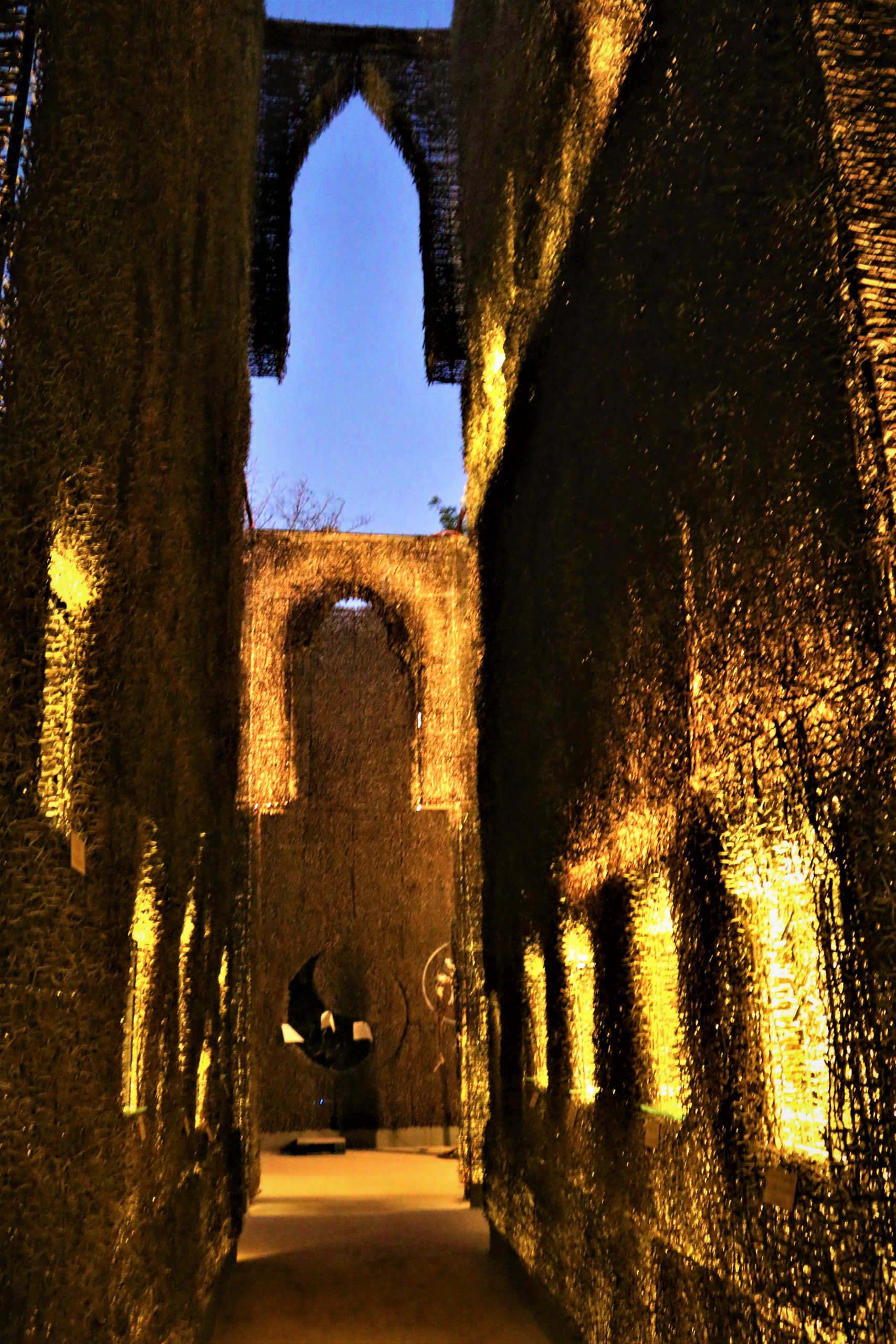 Client: The Cathedral of Thorns

The Cathedral of Thorns is a full building-sized illuminated labyrinth on the Caribbean island of Curaçao. Visitors are invited to walk through its corridors and experience an artistic journey through a troublesome history toward a bright future; both sides represented by the hostile yet beautiful thorns. To raise consciousness of the similarities between religions, the design includes symbols of today’s world religions and ancient nature-based religions. The walls have niches containing objects of contemporary art by guest artists, expressing mankind’s ability to change, share and collaborate through creativity. In addition, the labyrinth also functions as a stage for performances. The Cathedral of Thorns was designed by Herman van Bergen, winner of the prestigious Cola Debrot Award in 2016, and was constructed by unemployed youth. This work of art (in progress) unites all themes of Van Bergen’s previous thorn-art sculptures into one expansive project: a building honoring Mother Nature and the Free Spirit that achieves change through creativity.

Mother Nature
Award-winning artist Herman Van Bergen creates remarkable works of art with ‘sumpiñas’, the thorns of the Acacia Tortuosa bush. This dessert shrub is abundantly present on his home island of Curaçao in the Dutch Caribbean. Van Bergen’s visionary work with these spiny thorns, expresses Mother Nature’s struggle to survive in dry arid conditions after European invaders virtually wiped out the indigenous hardwood Wayaká trees on the island. His works of art also symbolize her fight against today’s biggest threat: the destructive pollution by humanity; how in spite of it all, the thorn shrubs still thrive. After observing this for many years, Van Bergen envisioned a series of sculptures created from this unusual material that would tell the many aspects of a turbulent history and honor the power of nature and a creative spirit.
Thorns become art
His first work was a tall thorn tower that resembled the Greek god Atlas and it was first exhibited between two strong paintings inspired by Francisco Zurbarán’s St. Serapion, depicting religious power. Van Bergen recognized the light shining through the thorns as a sign of human enlightenment and enhanced this aspect of the medium by actually incorporating lights inside his works. The orbs of light continued to be a significan

Royal Gift
Getting more familiarized with the material, in 2015 Van Bergen sculpted heads, torsos and objects, such as ‘Harvest’ and ‘Useless Islands’. Most famous is his ‘Nature’s Kiss’, a gift to the Dutch King and Queen on behalf of Curaçao in 2013. In addition to exhibitions in Curaçao, his work was selected and exhibited at international events like Art Prize 2012 in Michigan and Tropical Kingdom 2013/14 in the Netherlands. Van Bergen is also regularly invited to talk about his work, including a presentation at TEDxCuraçao (2011) and a lecture at the University of Louisville, Kentucky (2015).
The ultimate thorns sculpture
The Cathedral of Thorns will be a building-sized illuminated labyrinth. Visitors are invited to walk through its corridors and experience an artistic journey through a troublesome history toward a bright future; both sides represented by the hostile yet beautiful thorns.
From a distance the labyrinth resembles a native Arawak man, inspired by a rock formation on the west side of Curaçao, and symbolizing the exploitation of slaves during the colonial area. To raise awareness of the similarities between religions, the design includes symbols of today’s world religions and ancient nature-based religions. The walls have niches that hold objects of contemporar

An artistic journey The monumental artistic concept ‘Cathedral of Thorns’ preserves and tells a story that the world must not forget. It will help all who visit it, to reflect on lessons from the past – the ecological and humanitarian disaster caused by the exploration of the ‘New World’. It celebrates the power of nature and the new direction in which mankind can go when art is part of the thought process. It is also a job skill training program, giving unemployed, uneducated youth a well-deserved second chance. The Cathedral of Thorns unites all themes of previous thorn-art sculptures into one expansive project: a building honoring Mother Nature and the Free Spirit that achieves change through creativity. We worked with 15 persons and we had a lot of sponsors. Sponsors money wise and in materials. Volunteers. Journalists fromThe Netherlands, Radioand Durch TV, even on the Evening News. Sosial media and new website