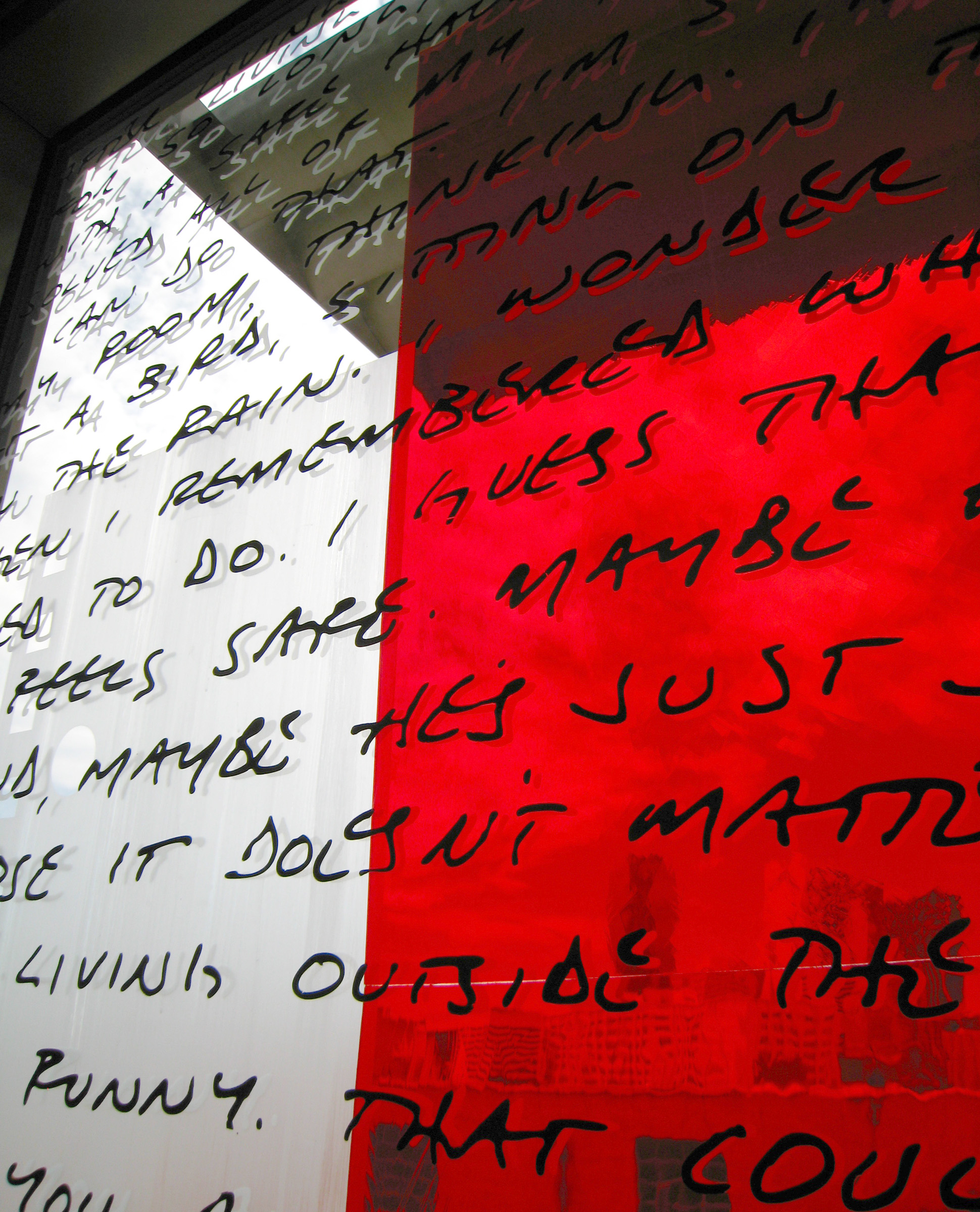 Gordon Huether was selected by the City of Dallas in collaboration with Overland Partners and Camargo Copeland Architects to design and fabricate a site-specific artwork for The Bridge Homeless Assistance Center. The City of Dallas Environmental and Health Services Department, as part of its ten-year plan to end chronic homelessness, provides The Bridge to offer multifaceted services and resources to assist the homeless. The 76,000-square-foot center is a magnet for more than 6,000 homeless in the city.

Gordon Huether's Windows to the Soul, a series of seven windows, was created specifically for the third floor of The Bridge. The artwork has two critical functions. First, it can be enjoyed from the outside, as the panes of color evoke qualities of stained glass windows. The blocks of color enhance the modernist-style architecture of the building and enliven the city skyline on the southern perimeter of town. Second, the artwork may be viewed from the inside. Looking out of the dormitory, the windows function more in a narrative way, thereby becoming an integral aspect to the lives of The Bridge’s clients. The units replaced clear glass units previously specified, so no structural modifications were needed to accommodate the art glass. The glass used by Huether speaks to aspects of transparency when dealing with the homeless issue. It also symbolically bridges the interior of the center and the wider exterior of the world, rather than acting as a barrier. Since opening in 2008, The Bridge has been more successful than anticipated. 1,400 individuals have been placed in permanent housing, the crime rate in the surrounding area decreased and the chronic homeless statistics show a reduction of more than 50%.

As the primary design feature, Windows to the Soul incorporates text derived from poetry by Lowell Smith, Billy Blair and other clients of The Stewpot, a Dallas-based homeless resource center. The verses were created during a workshop and were selected by Huether from many entries submitted for the public art project. To incorporate these poems into the final glass designs, Huether wrote them in his own handwriting. This provides visual consistency while retaining the immediacy and individuality of the tone of the writings. At times hopeful, funny, sad and frightening, the writings are inspiring and their message compassionately offers hope
to those using the center, giving voice to the plight faced by homeless people. with clear, annealed, laminated glass overlaid with areas of colored mouth-blown glass incorporating acid-etched designs and sandblasted and enameled text.

Huether: “Windows to the Soul supports the concept that shelters should be an integrated part of our community; they are valuable civic buildings representing the compassion of our society.” This project received two 2009 American Institute of Architects Housing Awards − the AIA/HUD Secretary’s Community-Informed Design Award and the AIA Housing Committee Special Housing Award. In addition, The Bridge officially received LEED Silver certification from the U.S. Green Building Council in 2009. It is only the second homeless shelter in the U.S. to be certified LEED Silver and is one of only four homeless shelters in the nation considered green.