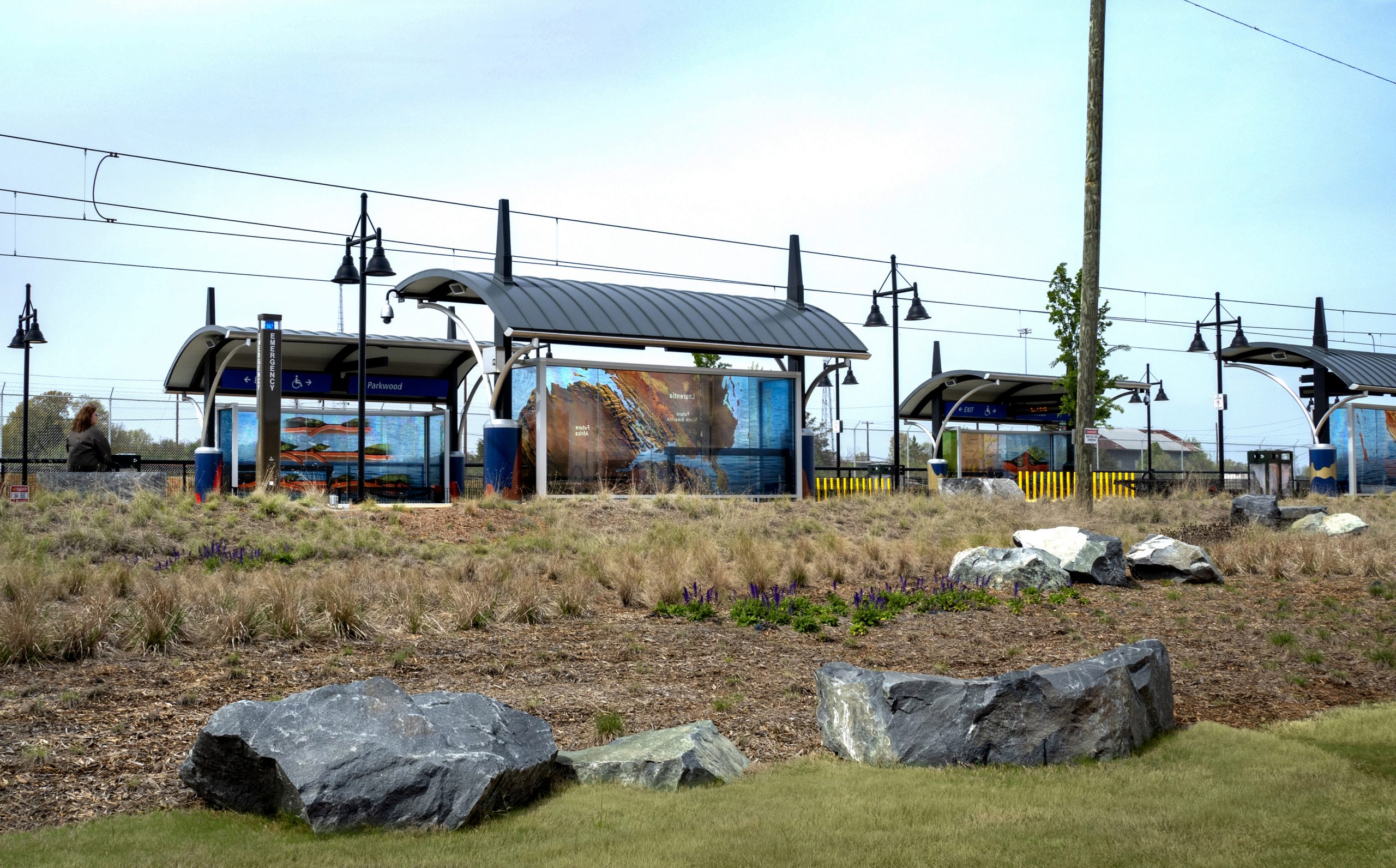 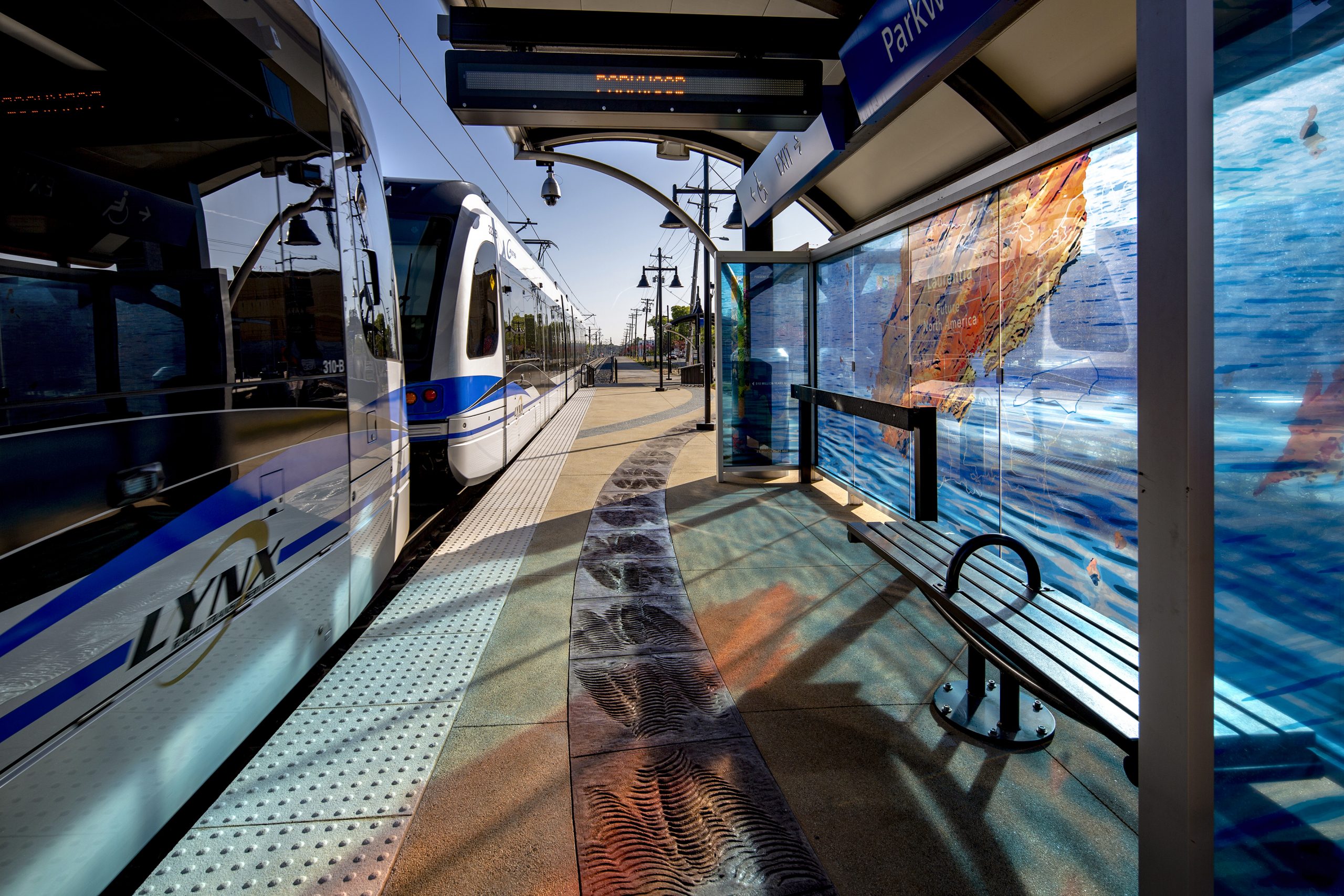 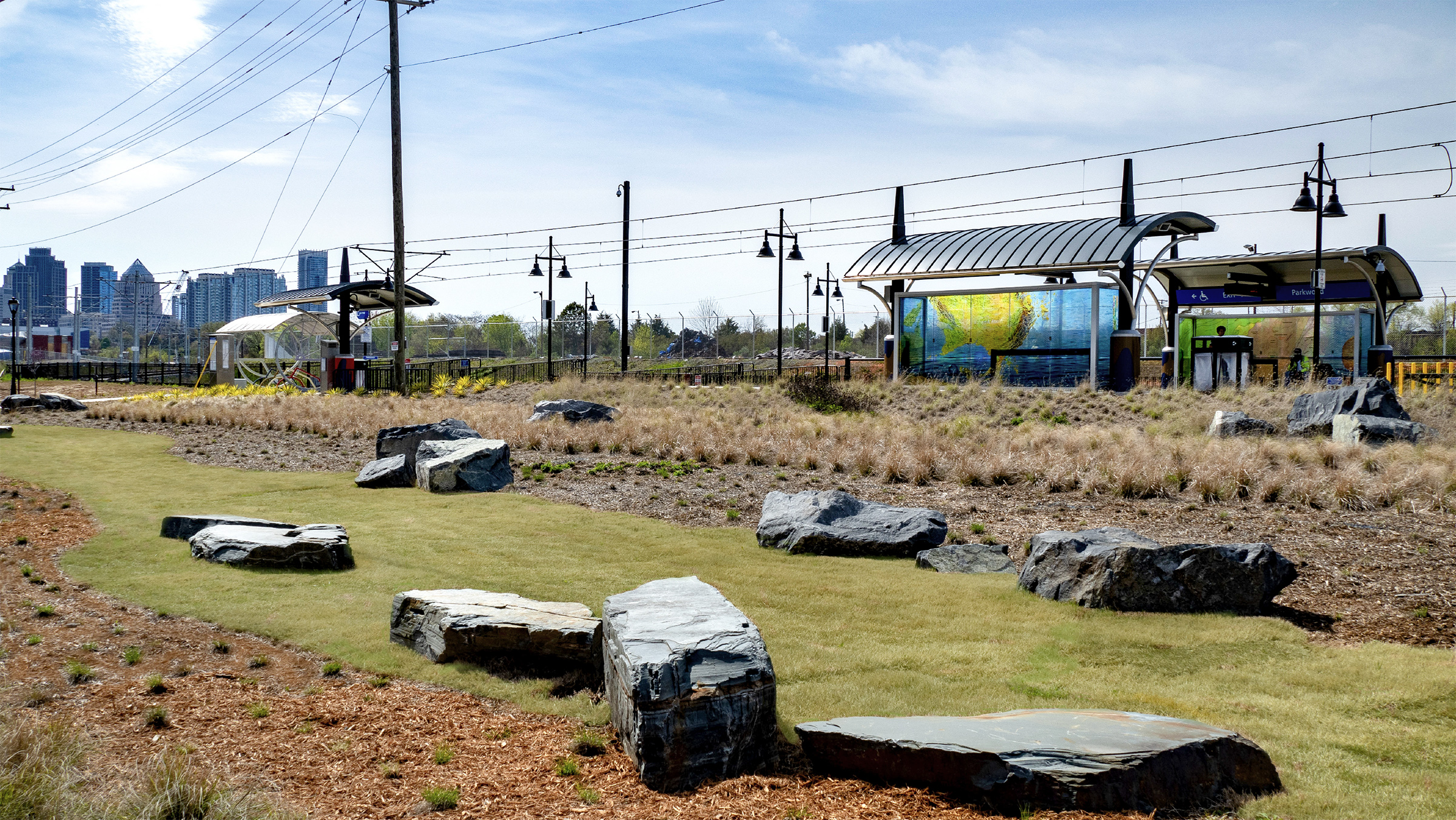 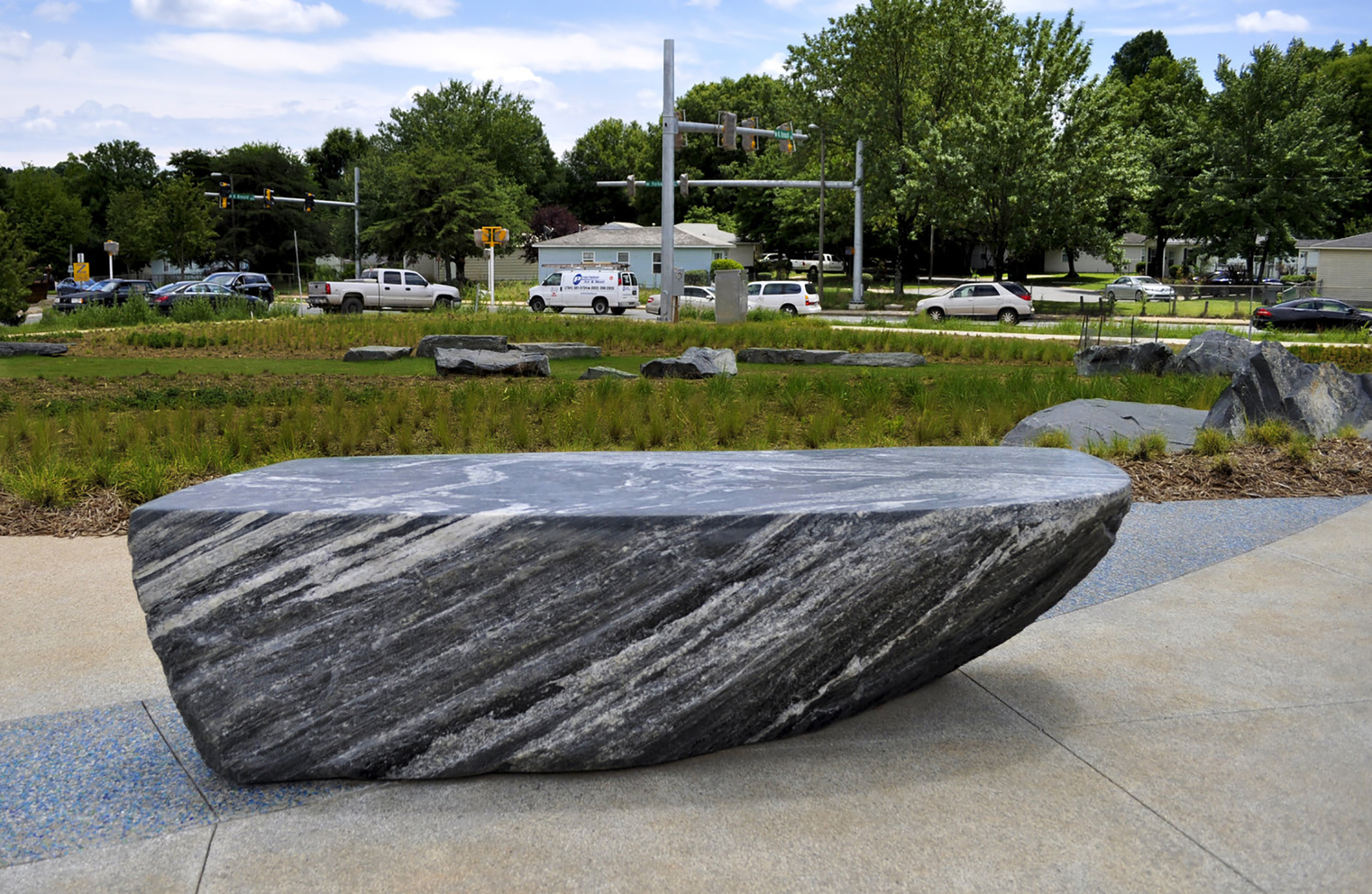 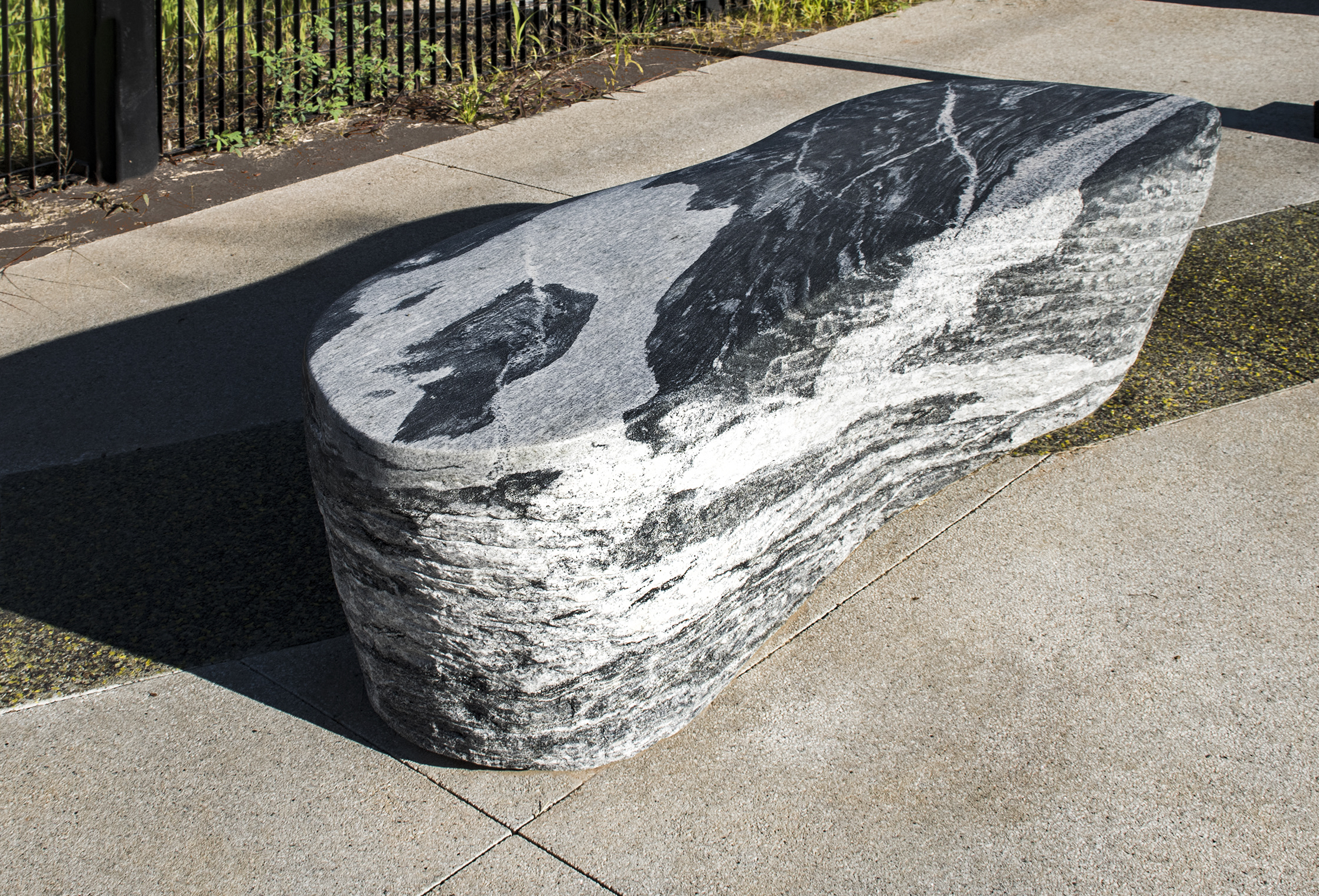 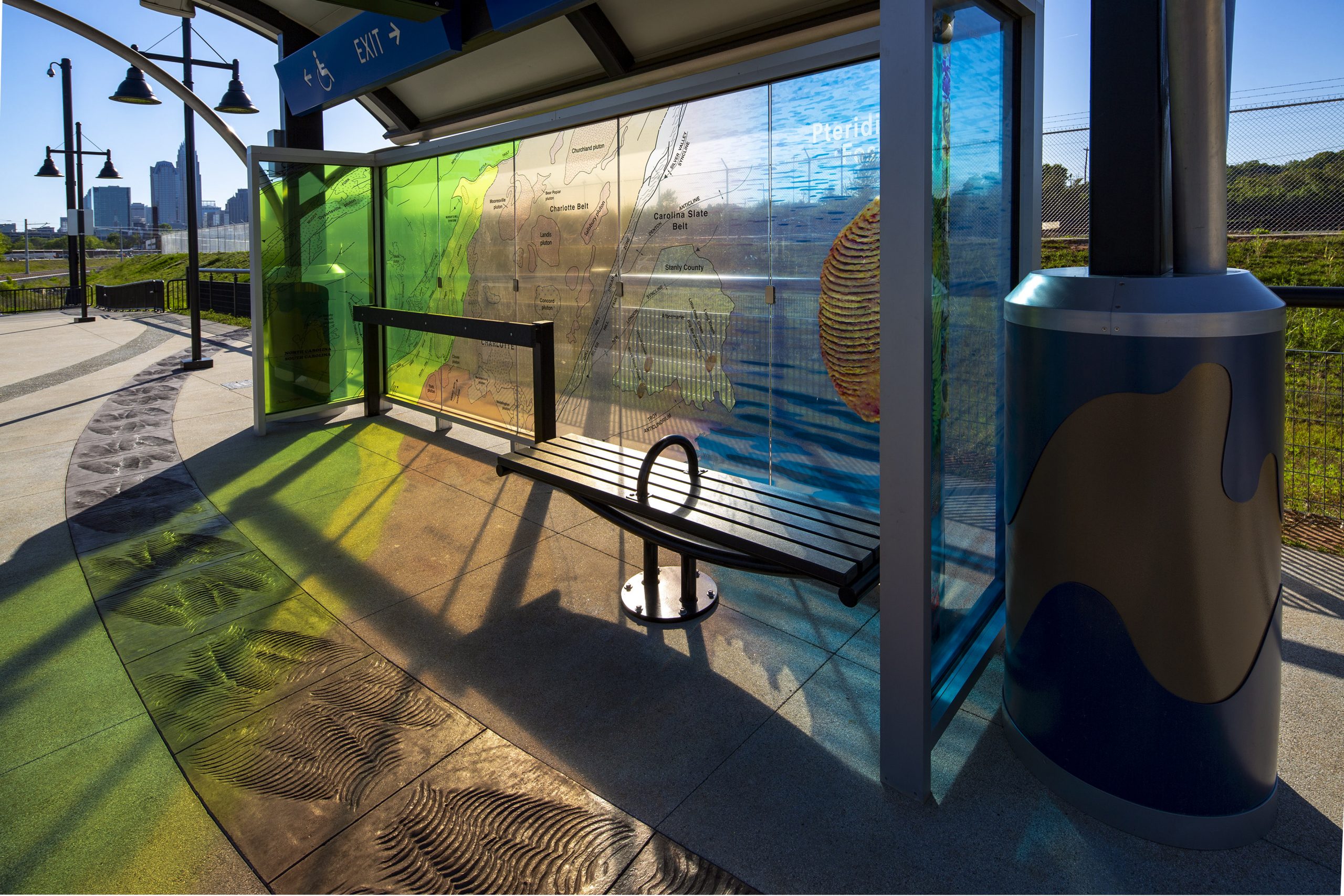 Artemis explores the layered geological identity below the surface of the site, with an invitation to wonder at the dynamic systems of the planet that sustain us as they manifest locally. She is interested in what is unknown about the places that are most familiar to us.
The Station platform and adjacent park become a physical and visual narrative referencing local geology, plate tectonics and water’s role in fossil and gold formation. The physical, tactile presence of stone in the landscape and on the platform embodies these past geological events. Through the richness of physical and visual elements, her work invites station users to enjoy their surroundings as well as to seek knowledge beyond their initial experience.
the US Geological Survey divides Charlotte and its immediate environment into two distinct areas: The Charlotte Belt, and the Carolina Slate Belt, referenced in the windscreen imagery on the southbound station platform as well as in the adjacent park. The boundary between the two belts runs in a northeastern direction. The grass-covered path crossing the park marks the same directional orientation. Local stone from each belt marks each edge of the path, echoing in miniature the boundary between the two geological areas.

The challenge of transforming the physical infrastructure elements, engineered for a public transit station with an adjacent park into a public work of art was revelatory. I learned to mine the possibilities within these limits with the goal of creating work that would not only be visually engaging but also enliven the experience of daily users of the station over time.
My goal was to create a work that transformed the utilitarian oriented environment of a rapid transit station into a multi-contextual experience of interest and delight for those who use the station daily as well as neighbors who live near-by.

The new transit line runs from downtown to the UNC, Charlotte campus. Working with Geology professors, John Bender and John Dimmer was a natural outgrowth of my fascination with the unusual geology of the Charlotte area and how it impacted the future social and economic development of the City and its surrounding area. They suggested areas I might study in more depth and offered further discussion as my knowledge grew. They also agreed to review my final design for accuracy. Their involvement with the project enriched the project and ensured the accuracy of the final information included in the windscreen designs. They bring their students to the site on field trips, contributing to deeper communal involvement with the work.
I worked closely with the Charlotte Area Transit System, Art in Transit staff over a nine-year period using their chosen fabricators for the Windscreen designs, Column cladding finish and the custom pavers. These individuals included Pallas Lombardi, Kati Stegall, and Christopher Lange the current Art in Transit Program Administrator.

The geological themes expressed throughout the station, differ for each platform yet are in conversation with each other. The glass windscreens are collages from various photos taken by the artist and geological maps. Each includes a timeline in the side panel composed of images that reference a sweep of geological and biological deep-time, placing each windscreen image within the larger context of our planet’s geological history. The timeline simply presents the rich diversity of life on earth and helps tell the story of the rare pre-Cambrian, Ediacaran fossil, Pteridium, which is found locally in the Carolina Slate Belt. In 2018, the fossil has been found also in southwest Africa, south Australia, and Russia. [580 million Years Ago] Both platforms include arcs of integral colored concrete with a custom designed stamp representing this fossil and featured on Windscreen 1 on the southbound platform. *Special thanks to Dr. Ron Blakey, Professor Emeritus, Northern Arizona University, Geology, for the use of his © paleographic maps in the collaged images for the northbound windscreens.