Synchronicity of Color for Kosovo - CODAworx 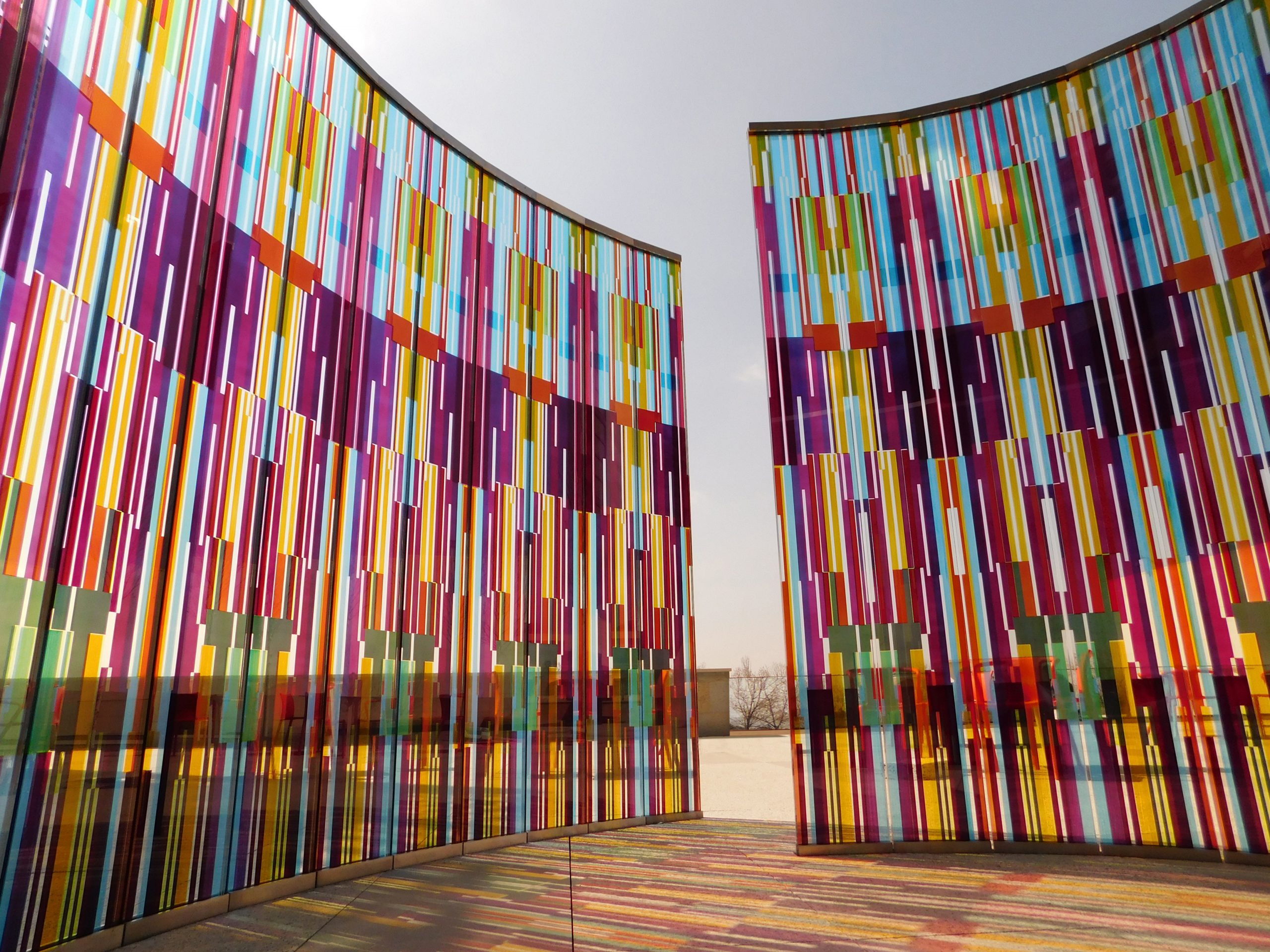 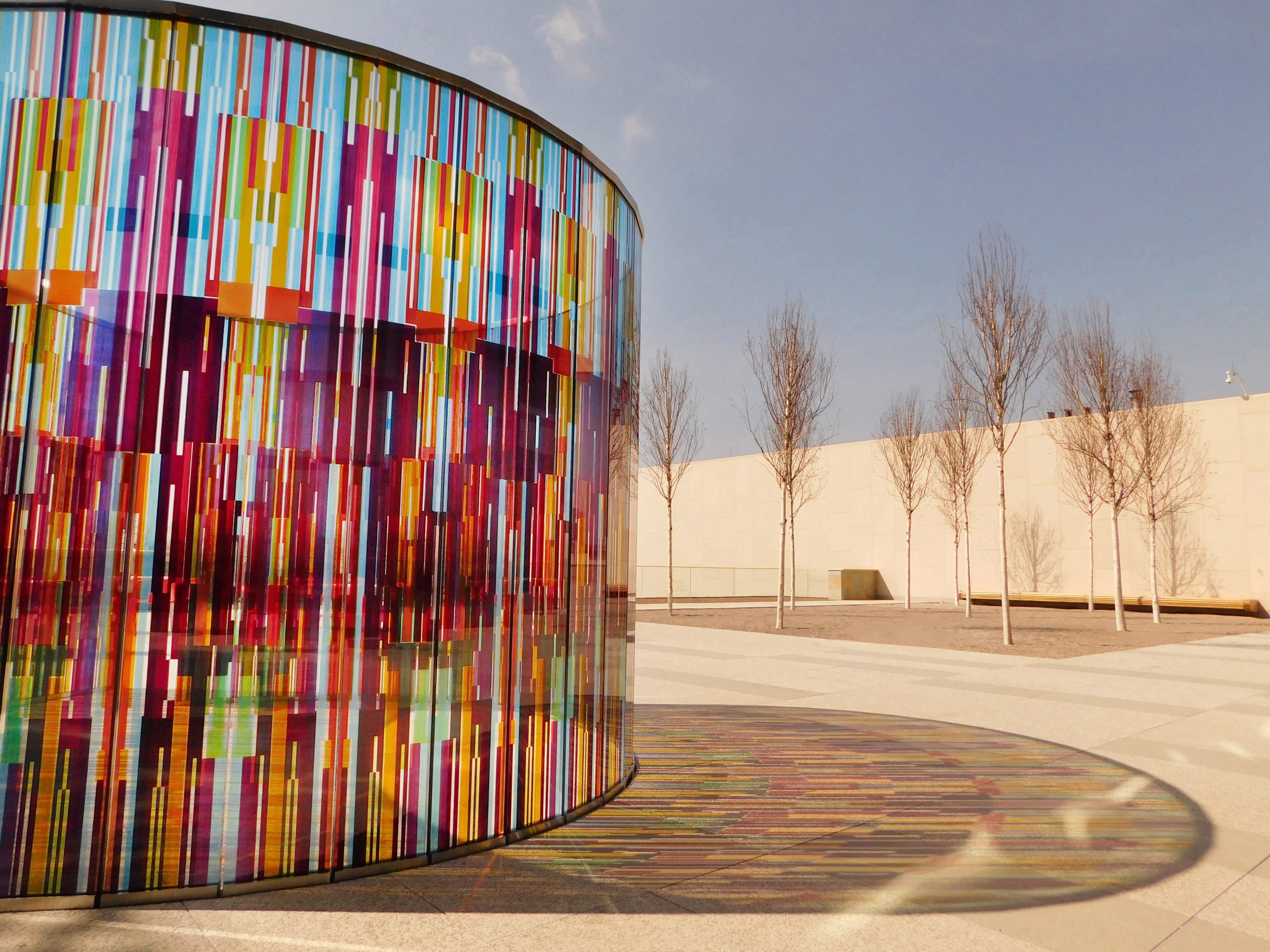 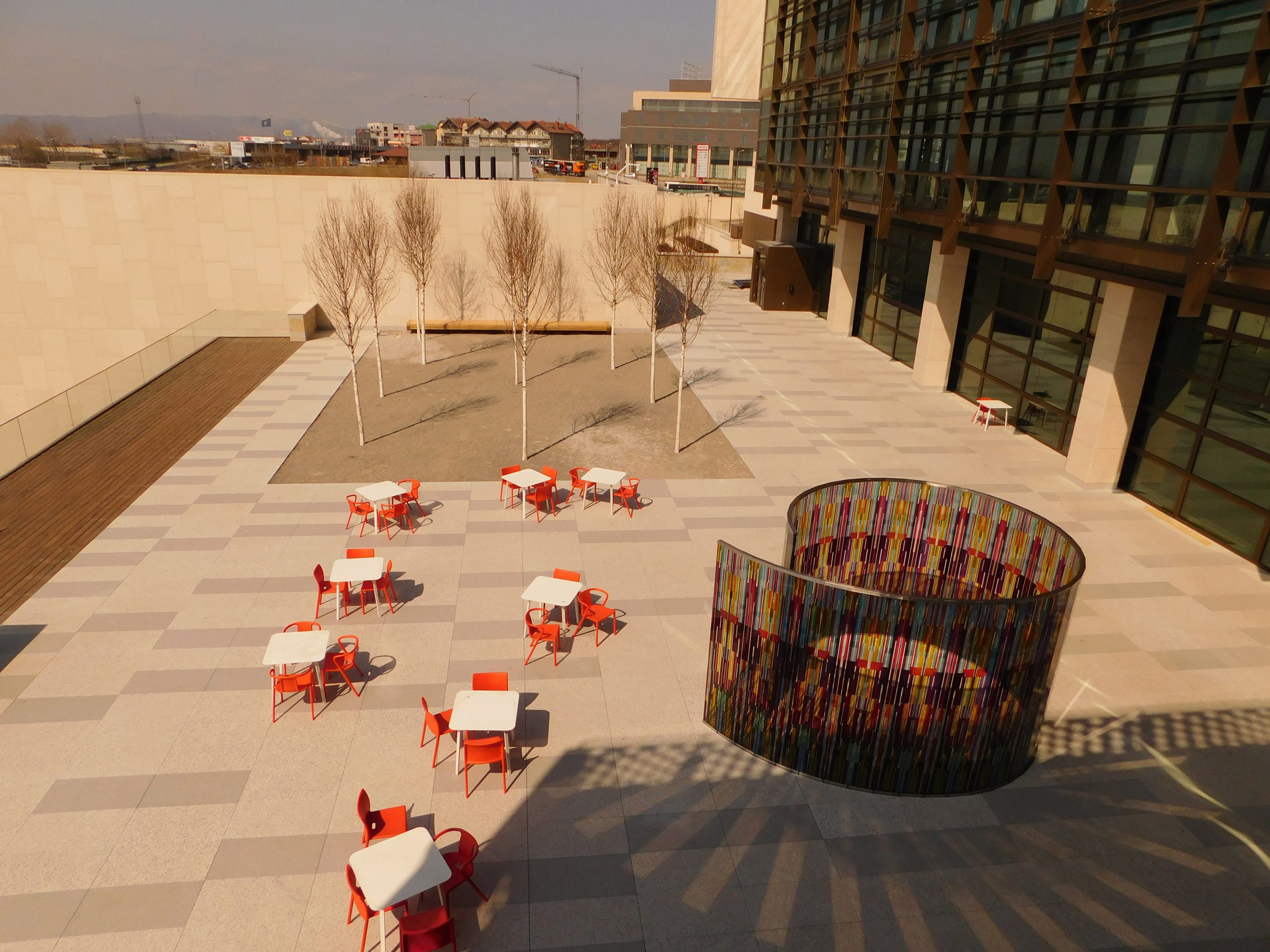 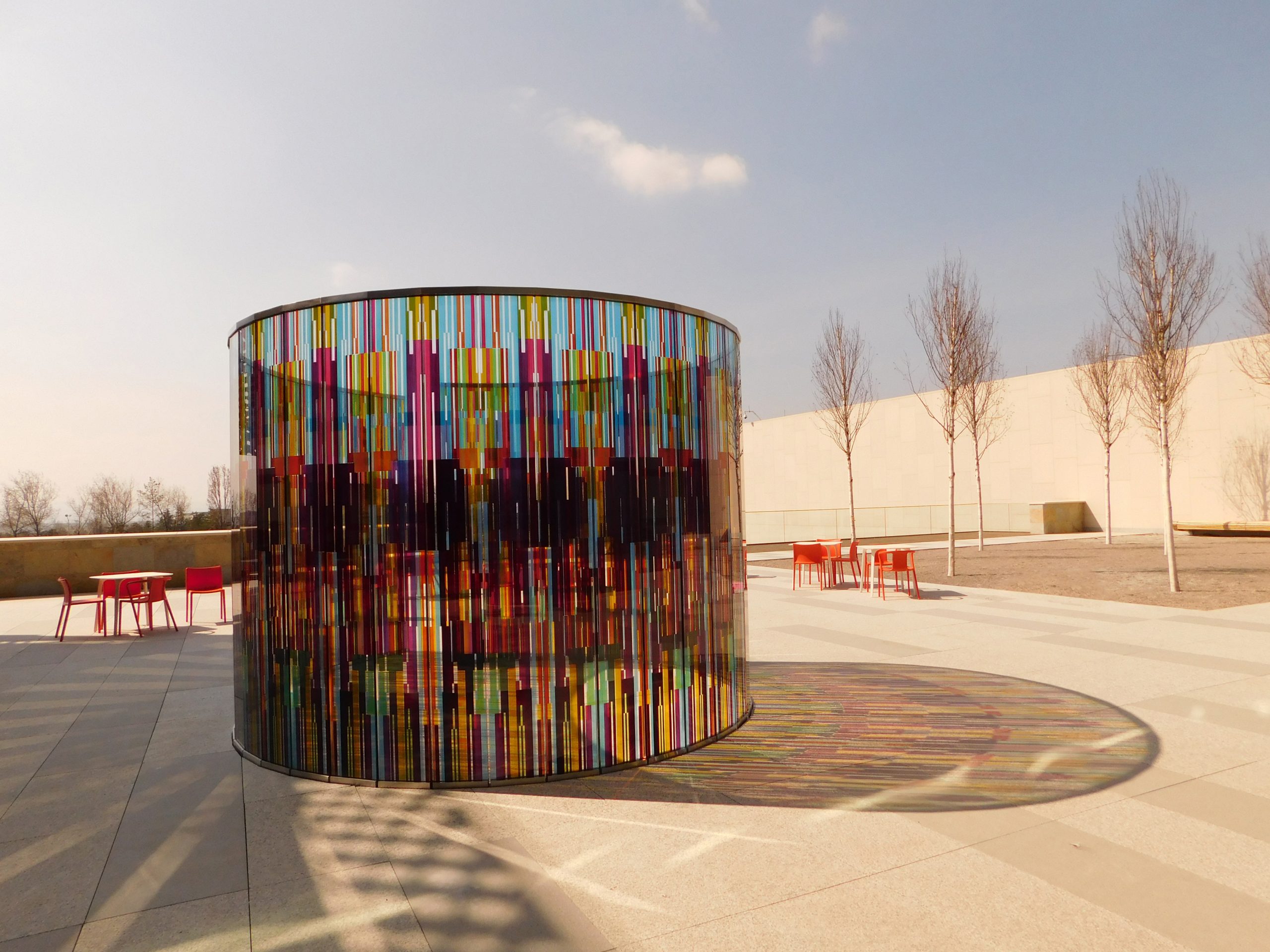 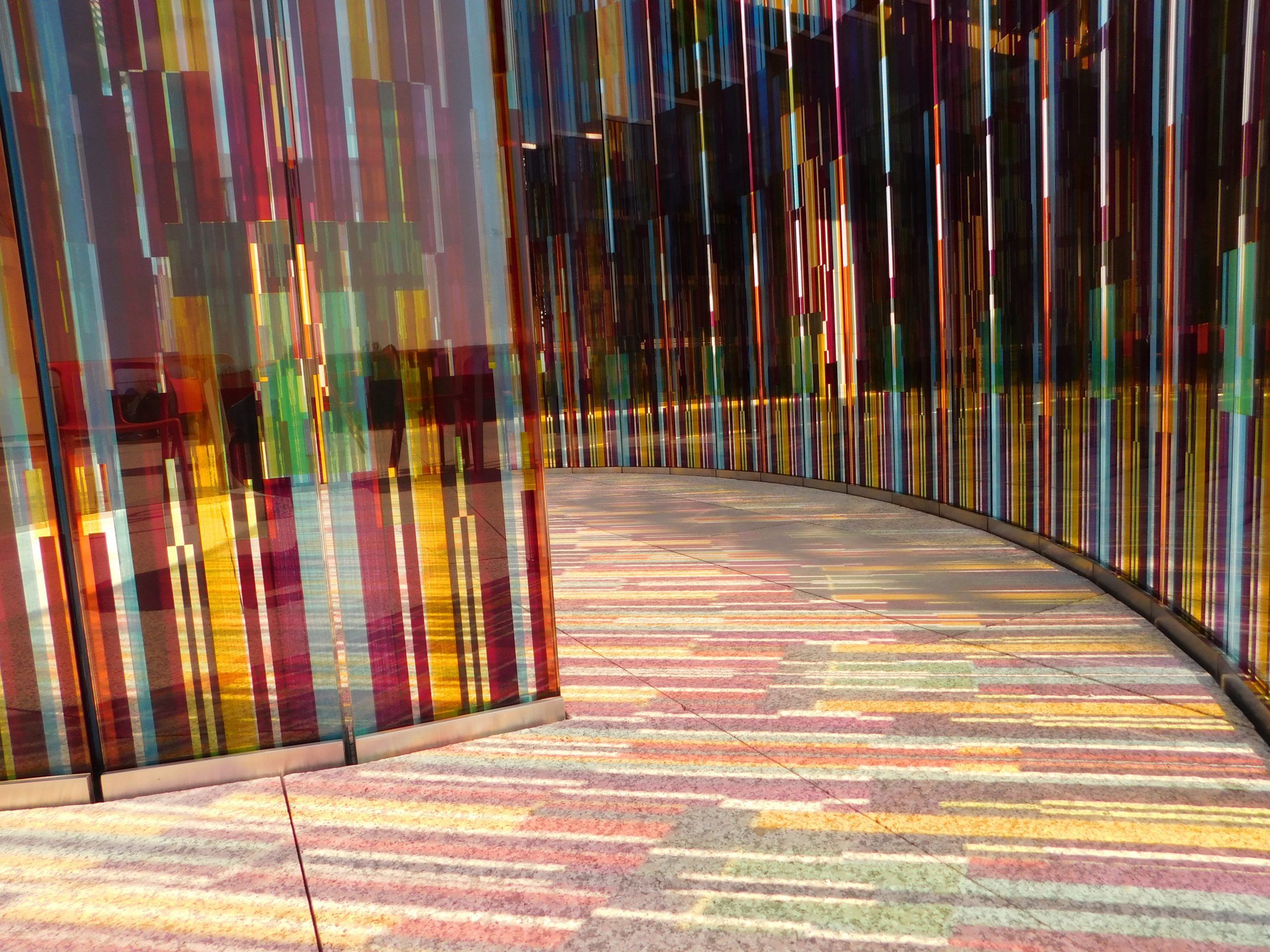 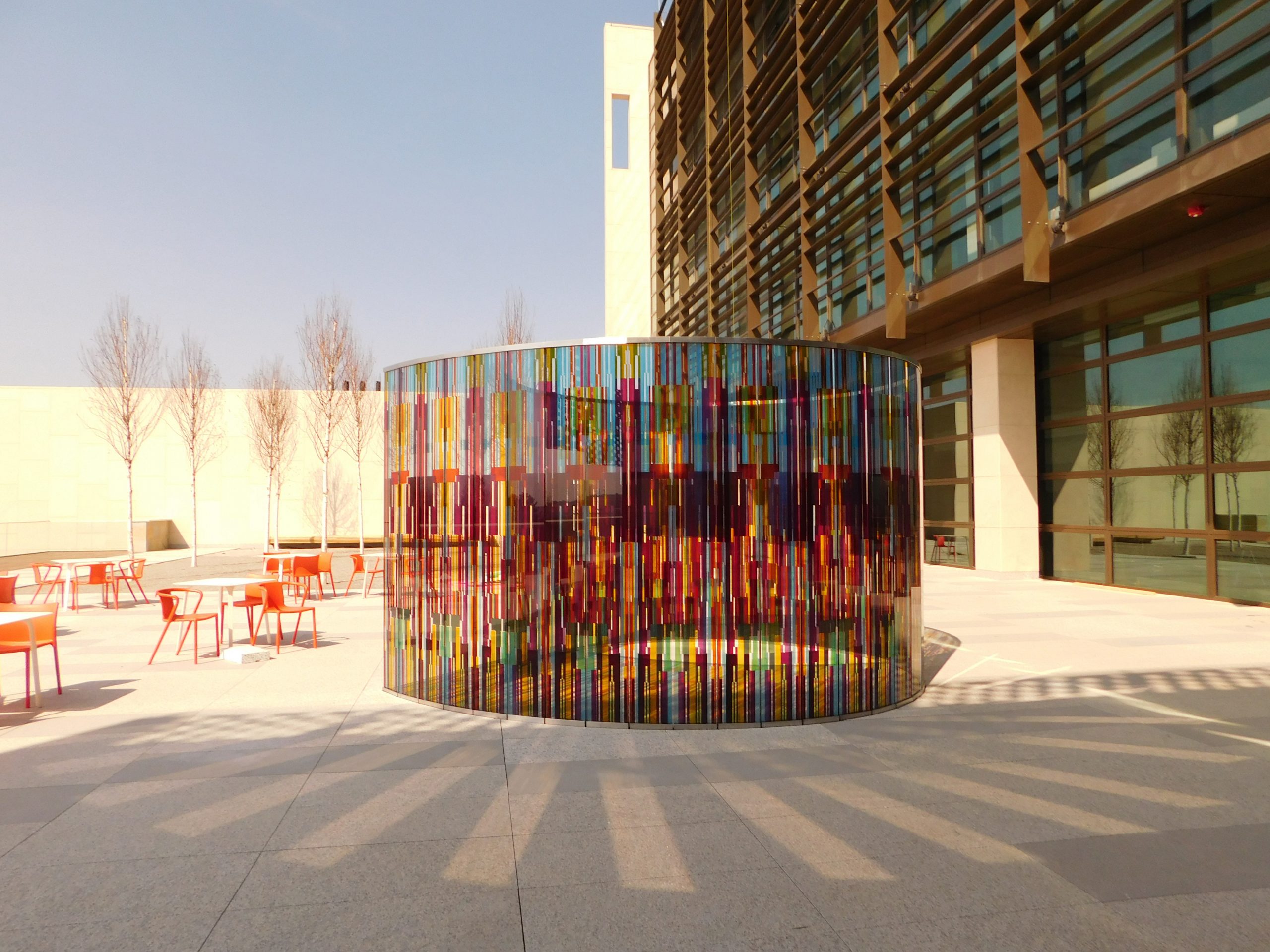 Client: Art in Embassies - US Embassy in Kosovo

Synchronicity of Color for Kosovo was a project commissioned by Art in Embassies. It is an immersive architectural glass spiral that was inspired by the rhythm of patterns and structures within the National Library of Kosovo in Pristina created by architect Andrija Mutnjaković. Sitting in the middle of the embassy courtyard, the spiral plays with color and light, and stands 9′ tall with a diameter of roughly 15′ wide. It is composed of forty 9′ by 1′ stained glass panels, each one hand painted with the flat glass studio of Franz Mayer of Munich in Munich, Germany.

Margo Sawyer chosen for this project because of her record of integrating color and monumentality into public art. It was important that a work be celebratory for this new moment in the history of the young country of Kosovo. Through an initial site visit, gained a brief understanding of the vernacular architecture of Kosovo and was drawn specifically to The National Library of Kosovo, which became a muse for the entire project.

Art in Embassies asked Sawyer to develop ideas for this new embassy. Sawyer Studio developed four designs, the last of which had never made and had no idea how to build. That being said, all were excited about this idea of bringing an architectural translucent spiral into fruition. While concurrently making a project with Franz Mayer of Munich, Sawyer decided that the work should be made out of glass. Franz Mayer were the perfect collaborators. Their knowledge of architectural glass construction was crucial to the realization of this project. The fabrication and installation was flawless in all aspects. The artwork magically appears from the plaza, the substructure invisible to the eye, as if you are walking into a stained glass window curtain. Working within the confidentiality of an embassy poses unexpected challenges, therefore it take a village to create works of art of such a grand scale. From the architects and construction crews, the glass and metal crew of Franz Mayer of Munich, the Art in Embassies staff, and the precision stone carvers- it was their willingness to work with me that helped Sawyer actualize such a monumental work.

Sawyer is a Professor of Sculpture and Extended Media in the Department of Art & Art History at the University of Texas at Austin. Her work has been exhibited both nationally in New York, Los Angeles, New Haven, Houston, Dallas, Austin and internationally in the United Kingdom, Italy, India, Japan, and Kosovo. She is represented by Holly Johnson Gallery in Dallas, Texas. Honors and awards received for her work include: John Simon Guggenheim Memorial Fellowship, The Louis Comfort Tiffany Foundation Biennial Award, Japan Foundation Fellowship, the Rome Prize at the American Academy in Rome, and a Fulbright Grant to India and Japan.