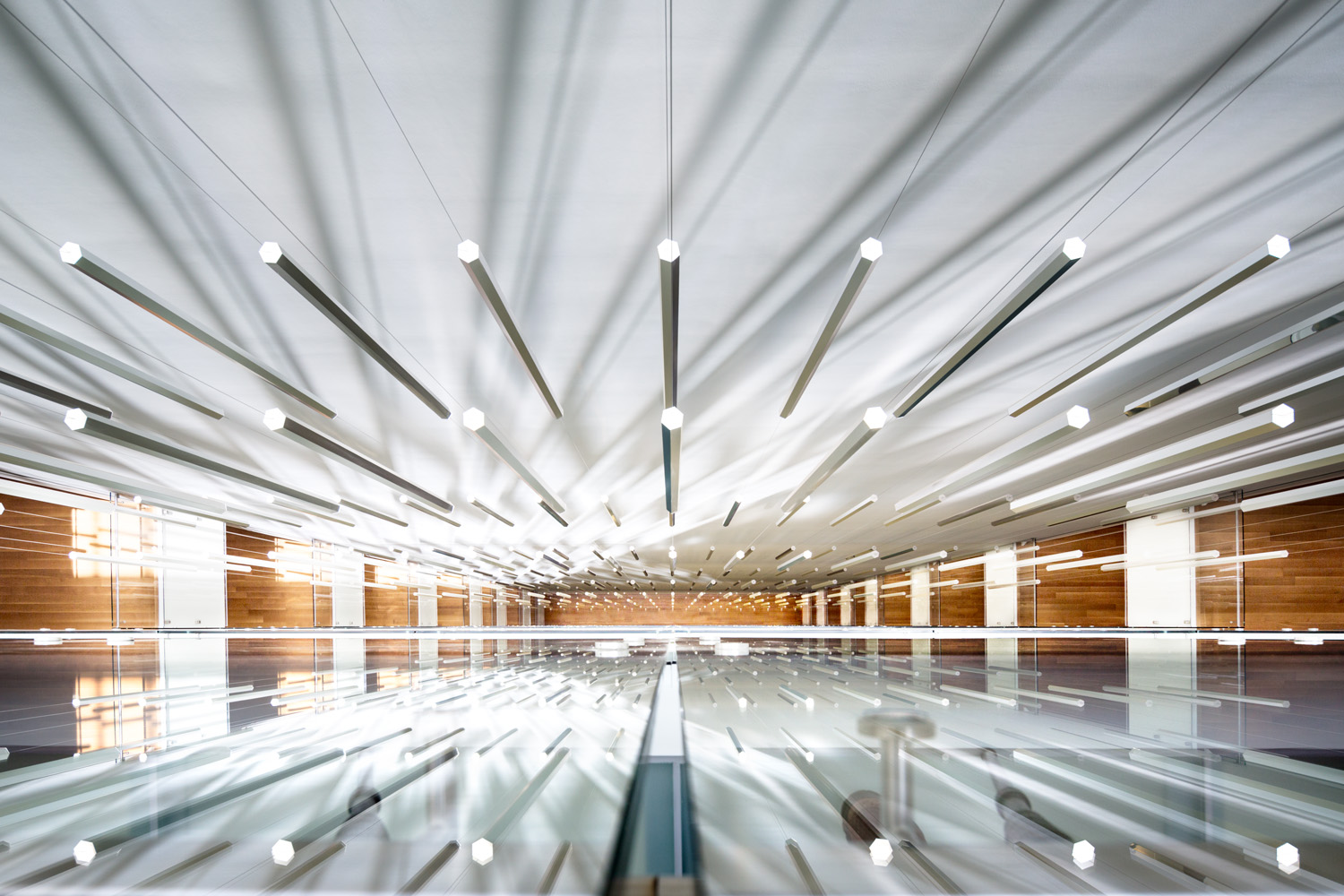 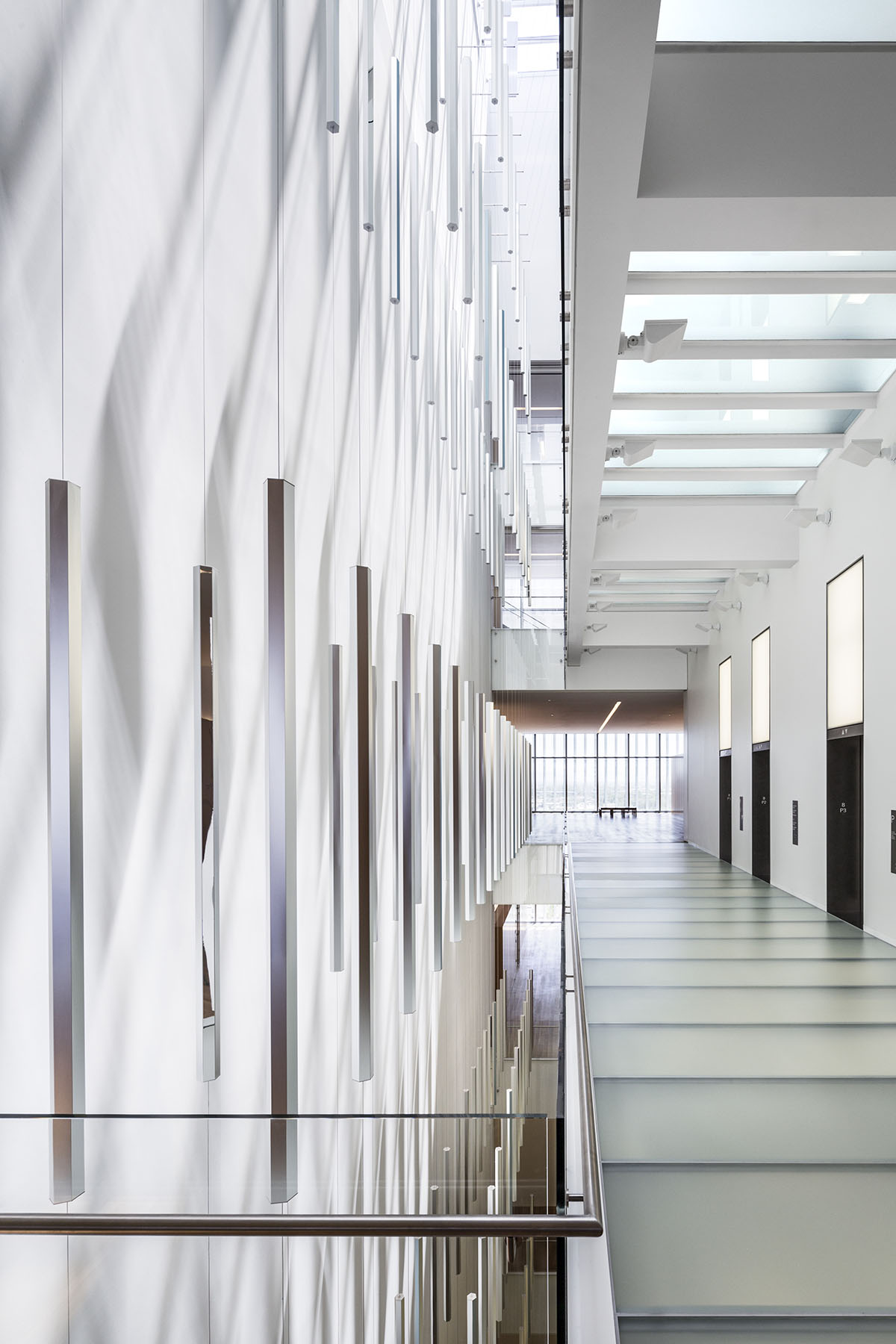 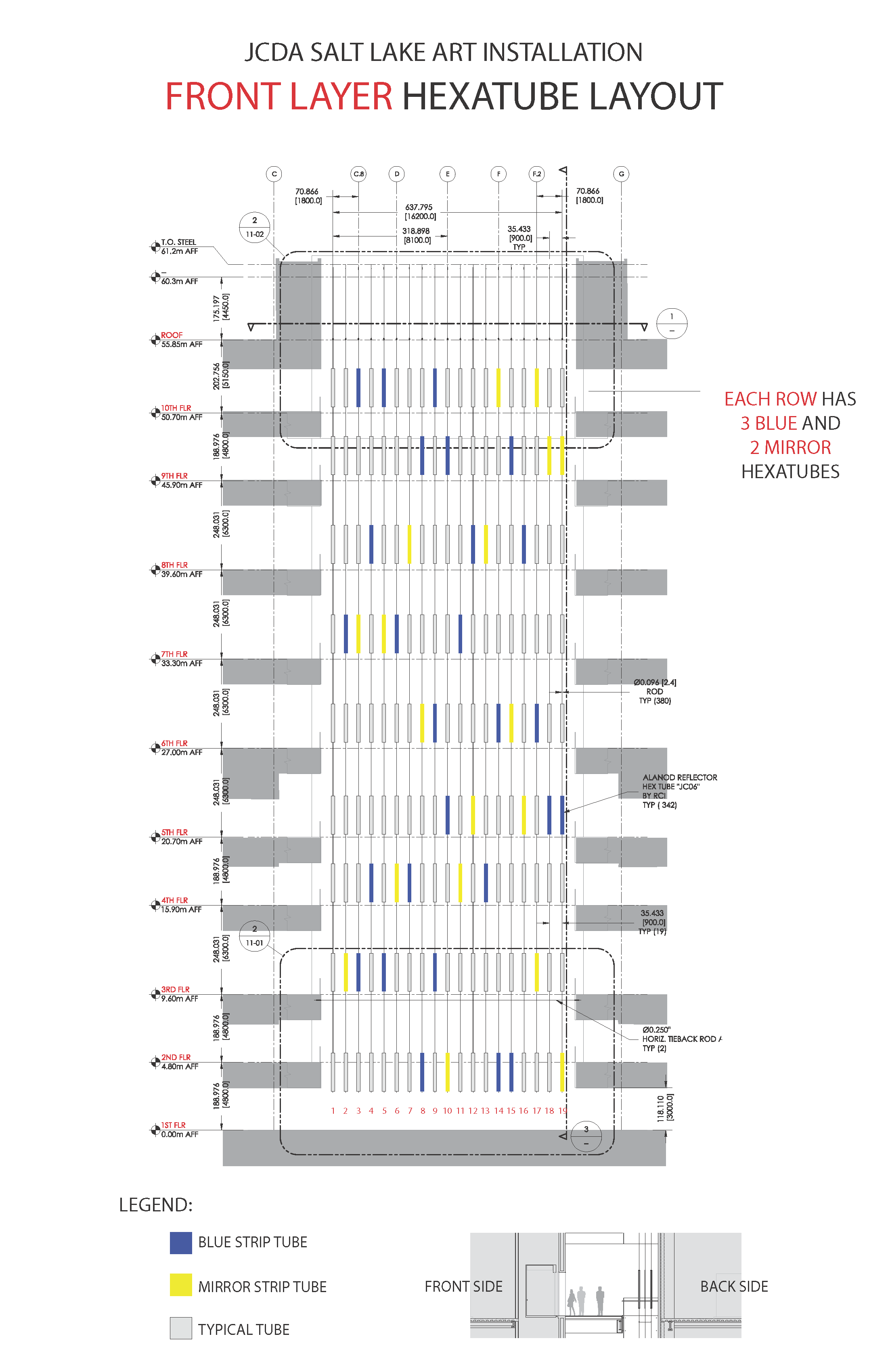 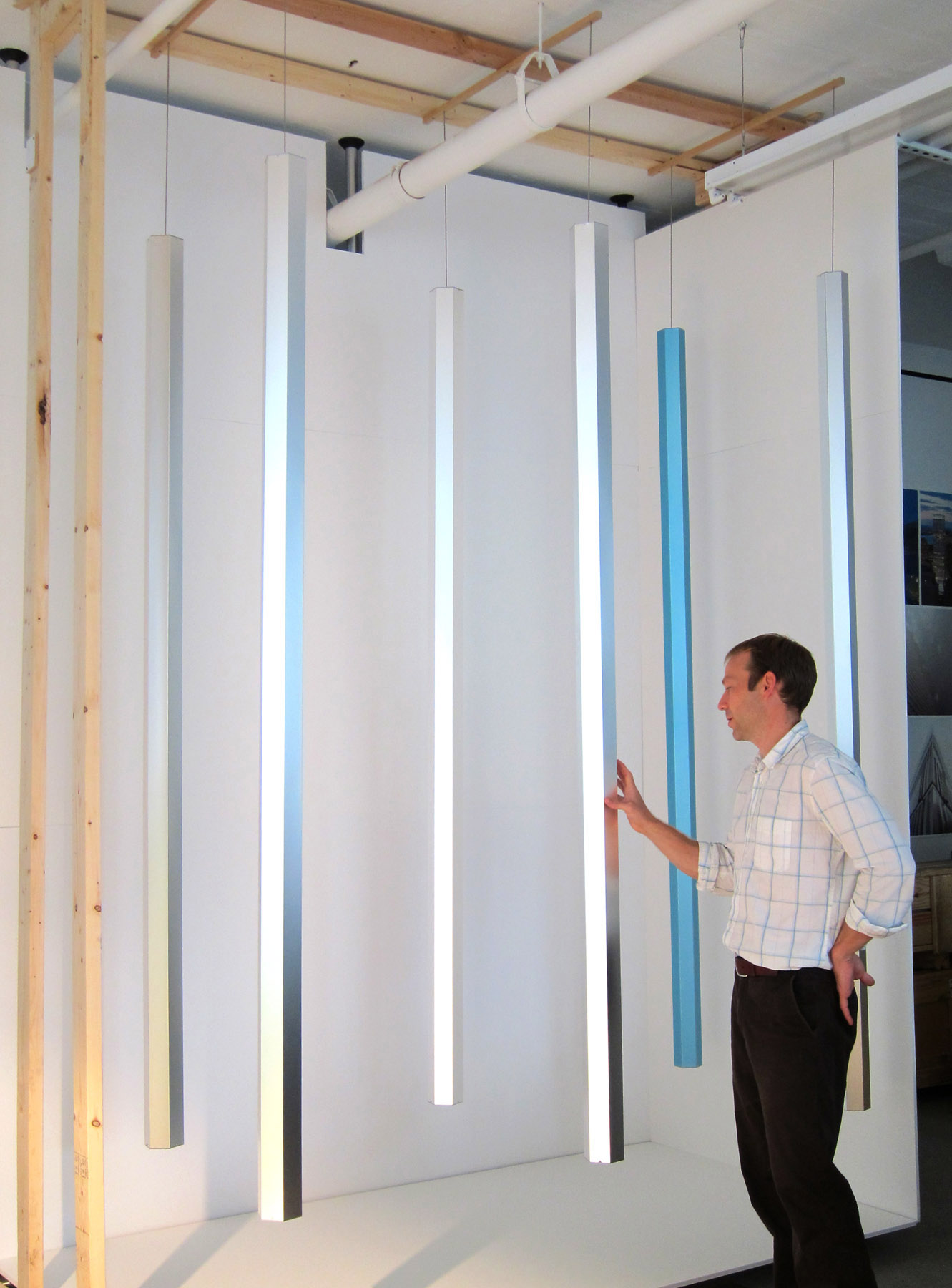 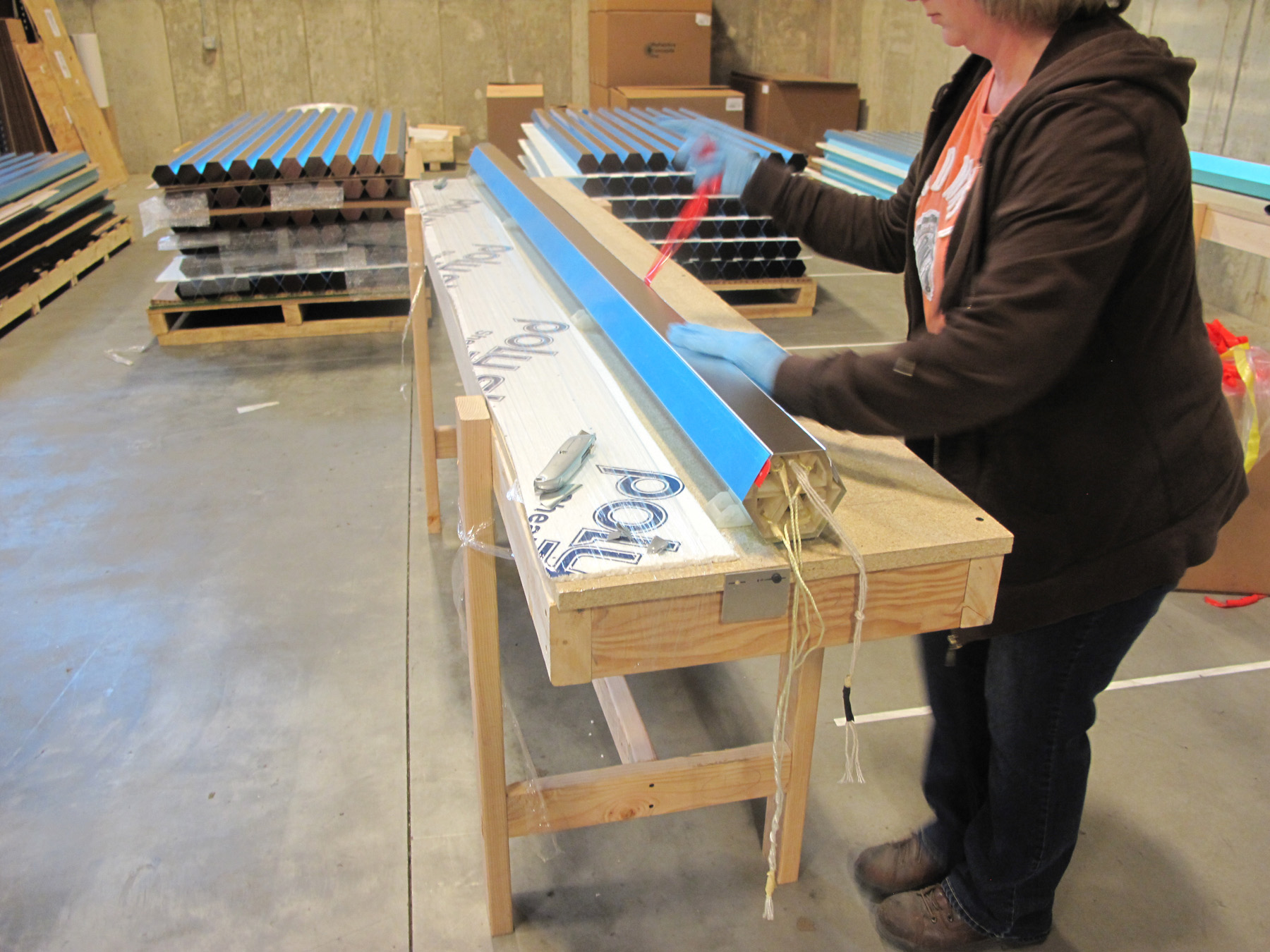 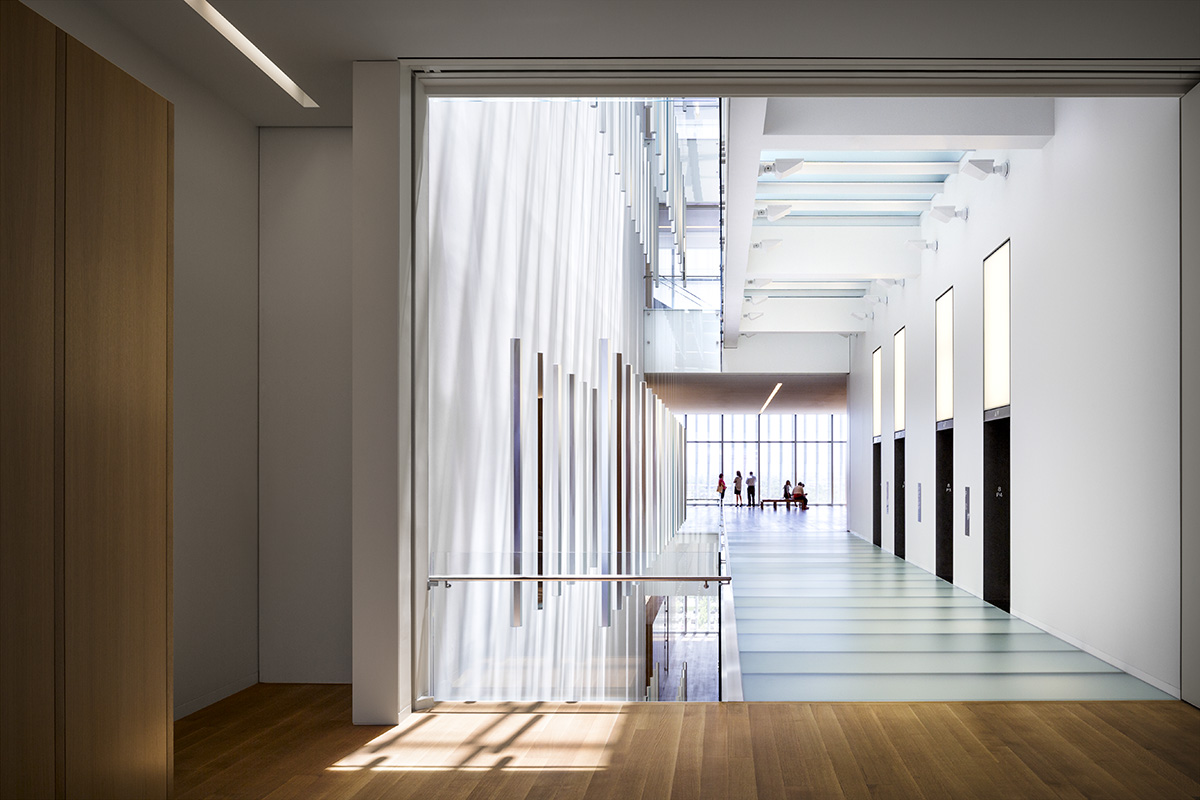 JCDA’s 190’ high x 53’ wide x 3’ deep artwork is conceived as a suspended grid of vertically suspended hexagonal “pillars”, designed to suggest and mimic a cloud composed of ice crystals. Such ice clouds are common phenomena in the Salt Lake City area and occur when cold air and water in the upper atmosphere combine to create suspended ice crystals that often take the form of polygonal “pillars”. When aligned and then intersected by a beam of sunlight, these hexagons refract the light and create a range of atmospheric light effects such as halos and pillars.

The art work’s 9 stacked fields of hexagonal tubes are, like the cloud borne ice crystals that inspire them, suspended and aligned. They are also intersected by beams of sunlight, projected into their midst by nine variously tilted mirrors below the skylight. Using reflection to emulate the refraction that occurs in clouds, the Suspended Light Pillars serve to evoke one of Salt Lake City’s signature visual phenomena

Commissioned by Art in Architecture Program of the U.S. General Services Administration, this sculpture occupies the entire height of sky-lit atrium at the elevator core and consists of optical aluminum, machined aluminum and stainless-steel rods.

Using reflection to emulate the phenomenal refraction that occurs in clouds, the Suspended Light Pillars serve to evoke one of Salt Lake City’s signature visual phenomena while marking the building’s vertical circulation.

Adapting to changes in the architecture, an initial version of the artwork which proposed fluted science-glass tubes, evolved into the development of anodized and folded sheet aluminum hexagonal pillars attached to suspended and tensioned cables. The unique lightweight system allows for each pillar to be replaced if necessary. Various anodized colors and reflective surfaces are featured in each aluminum pillar, creating a subtle depth of reading and animating the light from the skylight above.

Mirrors within the skylight additionally direct beams of light to the ground floor to coincide with noon throughout the year.

As in all our projects, drawings, renderings, physical scale models, full scale mock-ups and digital modelling were extensively used to establish the form, its performance and feasibility.

Daylighting was the driving theme for all the interior rooms and corridors of this public courthouse. The atrium artwork builds upon this theme. Depending on the viewer’s position (frontal versus the extremely oblique views looking up or down) the appearance of the field of suspended hexagonal elements fluctuates from static arrays to highly dynamic fields. Performing as a ‘solar clock’ marking midday, nine reflectors are located below the atrium skylight. Calibrated and fixed to redirect beams of sunlight down the more than 100’ deep atrium space, the mirrors illuminate the public circulation area at ground level with a bright pool of light.