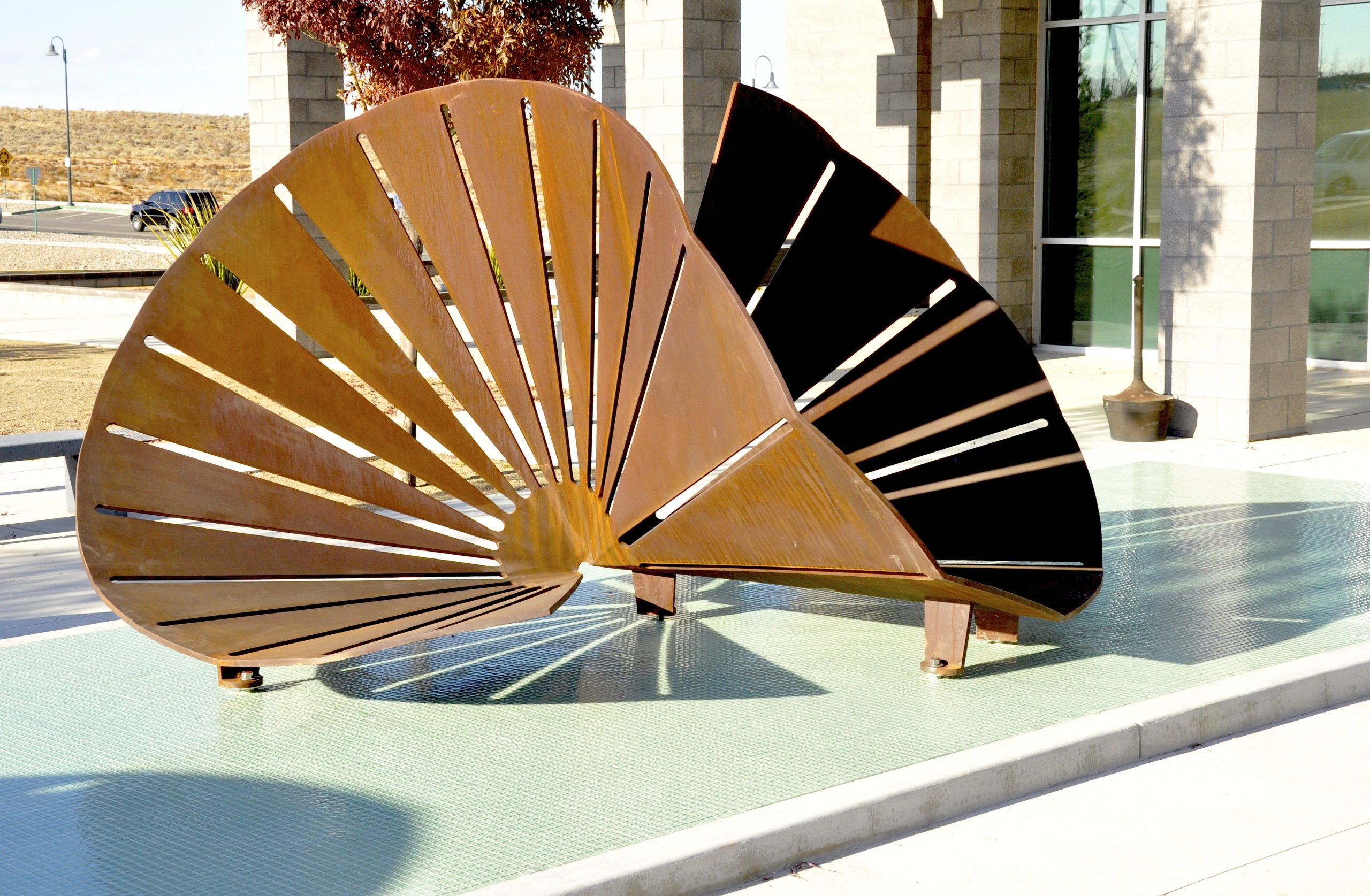 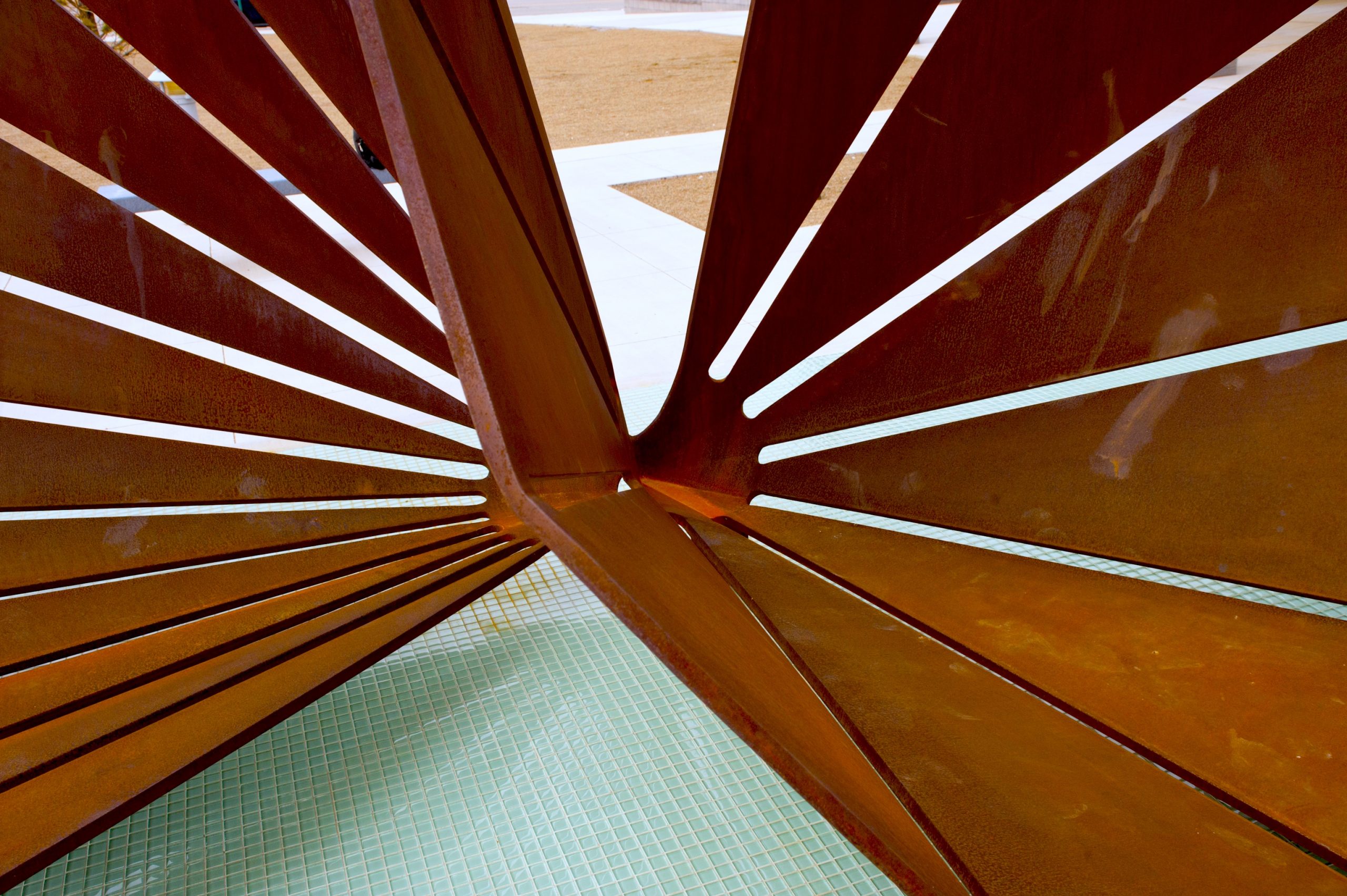 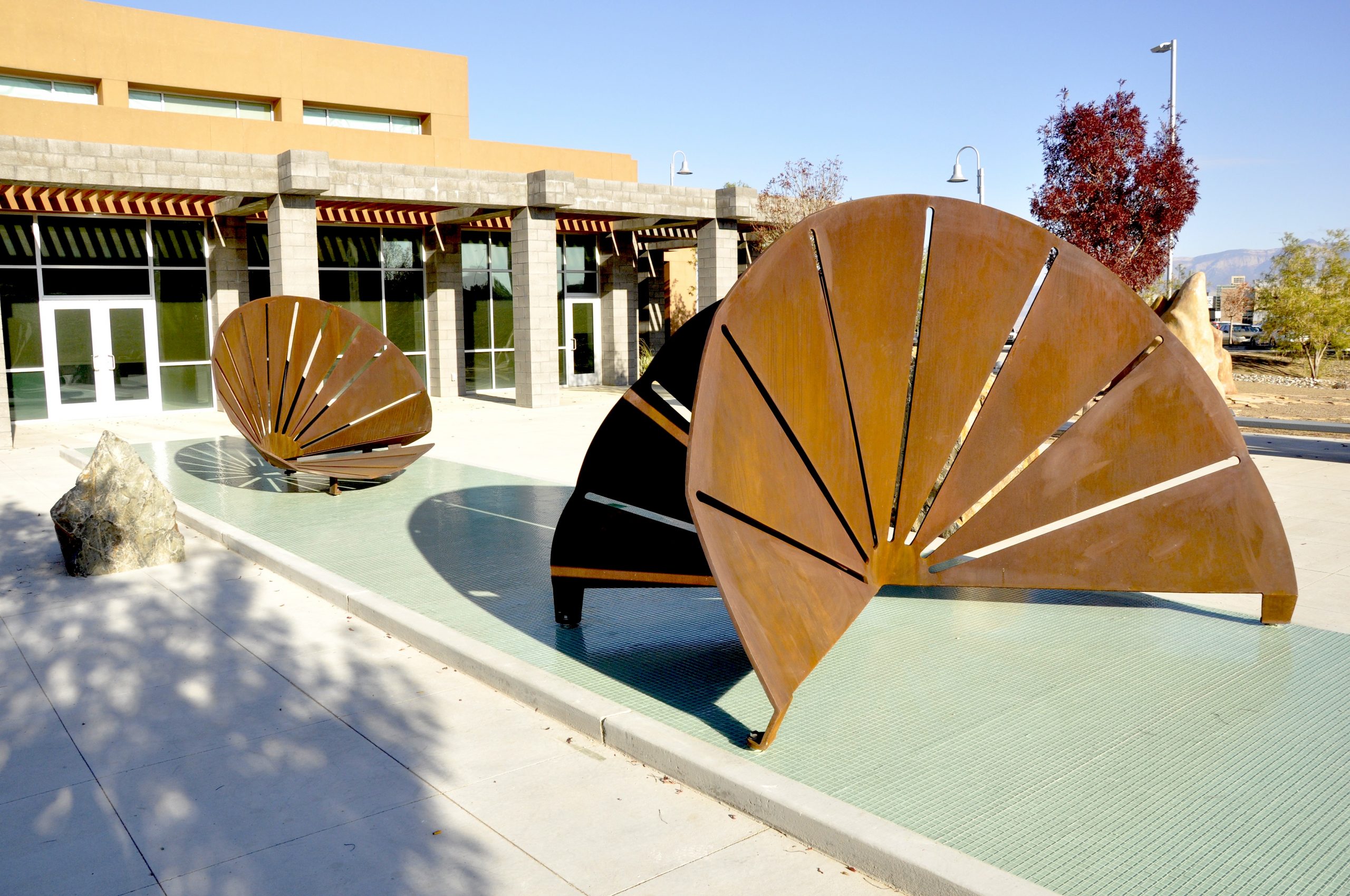 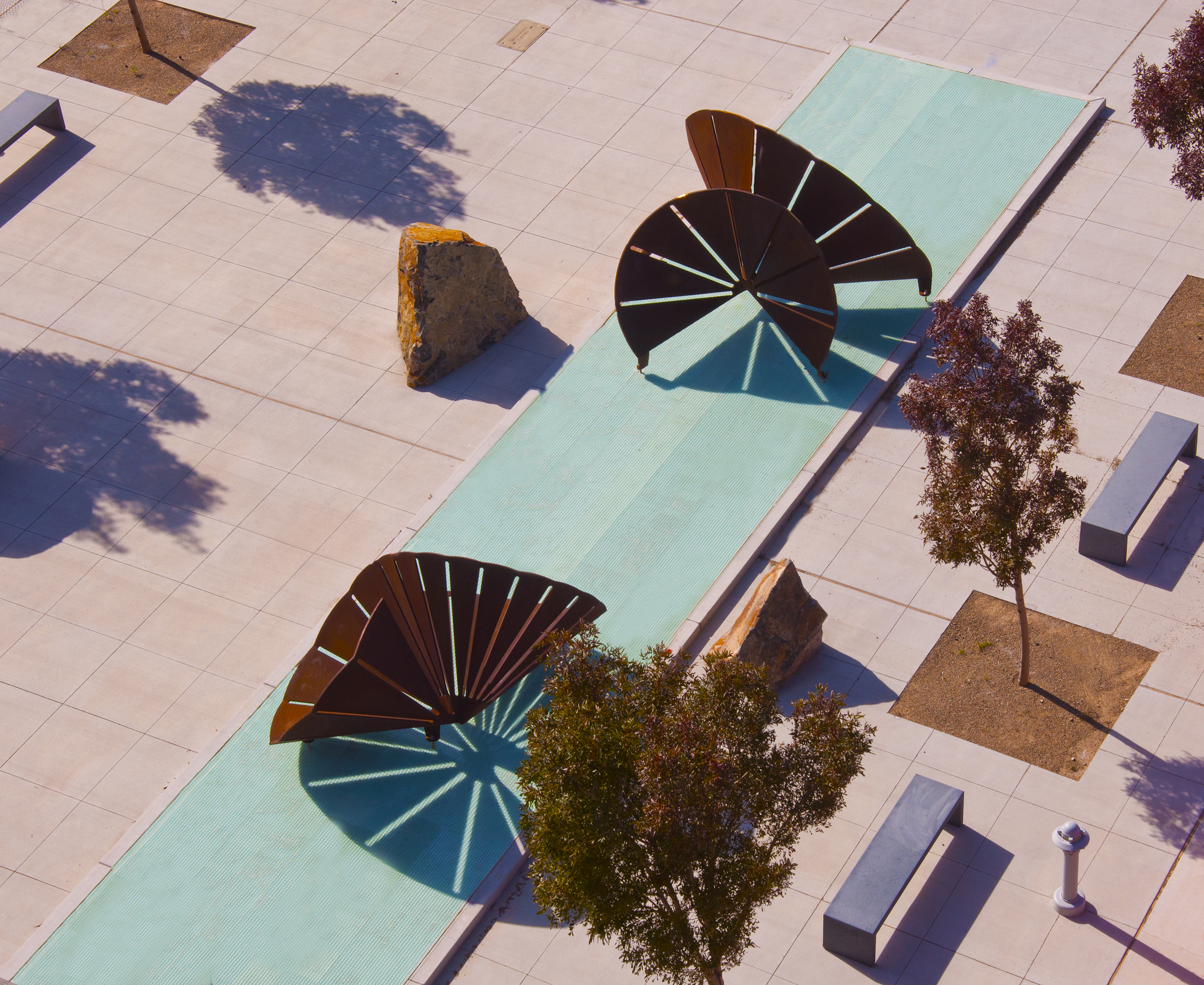 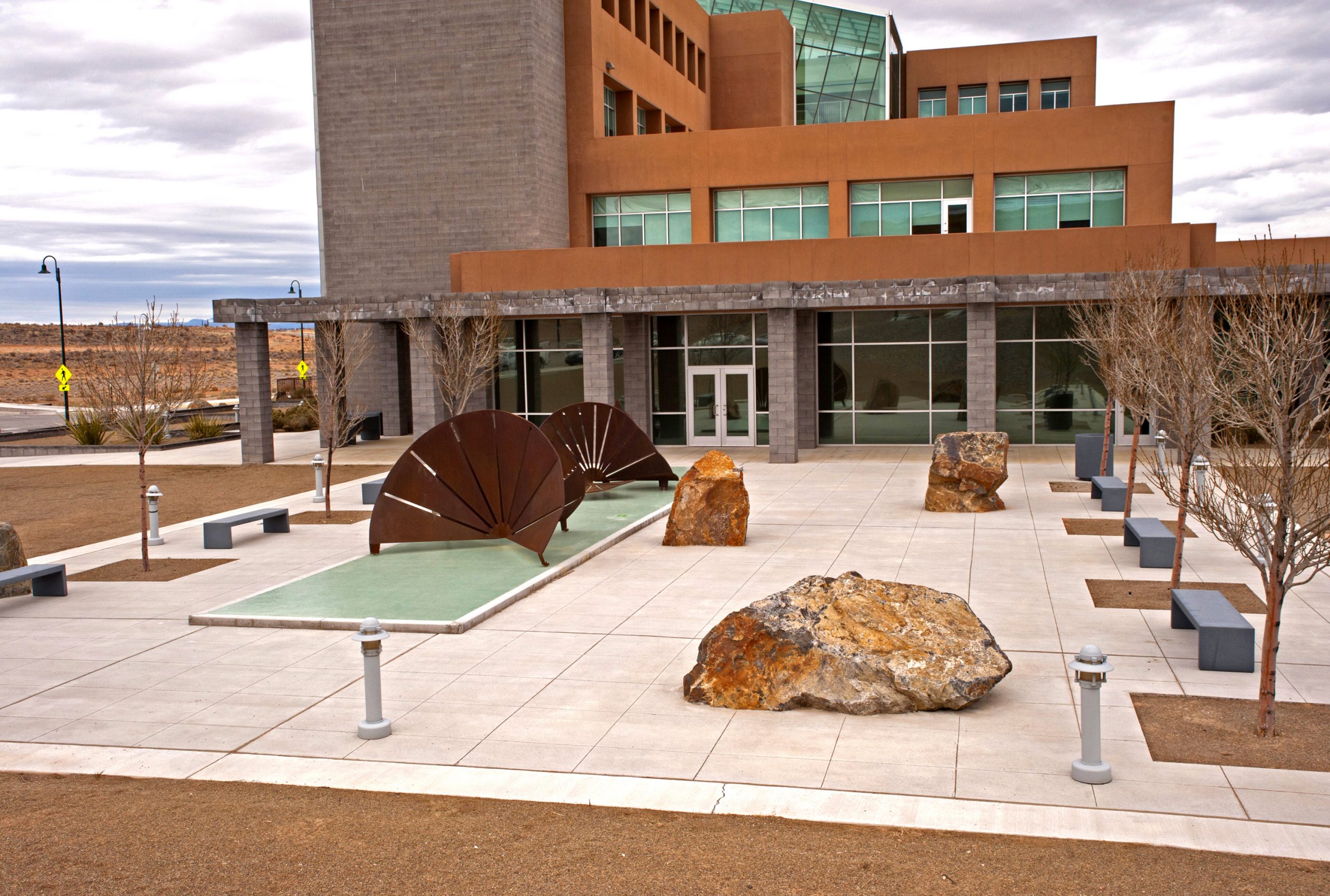 Sun Mask was a commission from the State of New Mexico for the Rio Rancho City Hall complex in Rio Rancho, New Mexico. The challenge was to turn a former reflection pond into a beautiful, welcoming, and inviting space with site appropriate materials. Situated northeast of Albuquerque, Rio Rancho is an arid, windswept, wide-open place surrounded by low shrubbery. We needed to integrate the modern architecture with the dry environment and create a union between the two. Dimensions: L 60 feet x W 12 feet x H 9 feet.

The built landscape was square with hard edges, a sharp contrast to the surrounding environment which is low and flat. How were we to blend the organic with the inorganic? By capturing the arc of sunlight and creating a kinetic sculpture out of static components.

We also wanted to defy the weight of one -inch plate Corten steel by juxtaposing it with delicate glass, which reflects the other contrasts present, while also uniting them.

The steel objects were designed as stencils for the sun. As light penetrates through the openings in the steel plates, dramatic shadows emphasize and stretch the design across the sixty feet of glass. These shadows are possible because the sculptures are advantageously placed along the east west bias of the foundation.

The foundation is inlayed with one inch square emerald green mosaic glass tile, accomplishing four things: 1) it matches the glass windows of the building, creating unity between the two components. 2) The steel visually levitates off the glass because of the complimentary colors. 3) It creates a kinetic refractory element that captures the sunlight and energetically animates it. 4) It brings the feeling of an oasis to a dry and barren landscape.

What began as a public safety hazard ended as a powerful partnership between numerous entities across diverse fields. Our mission was to artfully replace a water-filled reflection pond that overflowed and created icy sidewalks in winter, endangering passersby.

The State of New Mexico was responsible for soliciting an artist who needed to prove sensitivity to the site, the architect, the local arts council, the mayor, and the city planner. Together, they agreed upon a final design created by the artist. Once the design was chosen, there was huge coordination between the artist, six fabricators, nine concrete laborers, a mathematician who provided the equations for the layout, and all the material suppliers.

The manufacturing of the glass tiles alone was a massive undertaking. Because the color of glass is affected by the ambient temperature, all the tile had to be manufactured in one cast. To accomplish this, an entire factory in China dedicated its full staff for one week to this project.

The project came together seamlessly because of the integrity of the collaboration. Clear communication, respect for each other's expertise, and a dedication to the final vision were the hallmark virtues that resulted in a successful project.