Greater Works in Stained Glass: Our Call and Journey - Love In Action - CODAworx 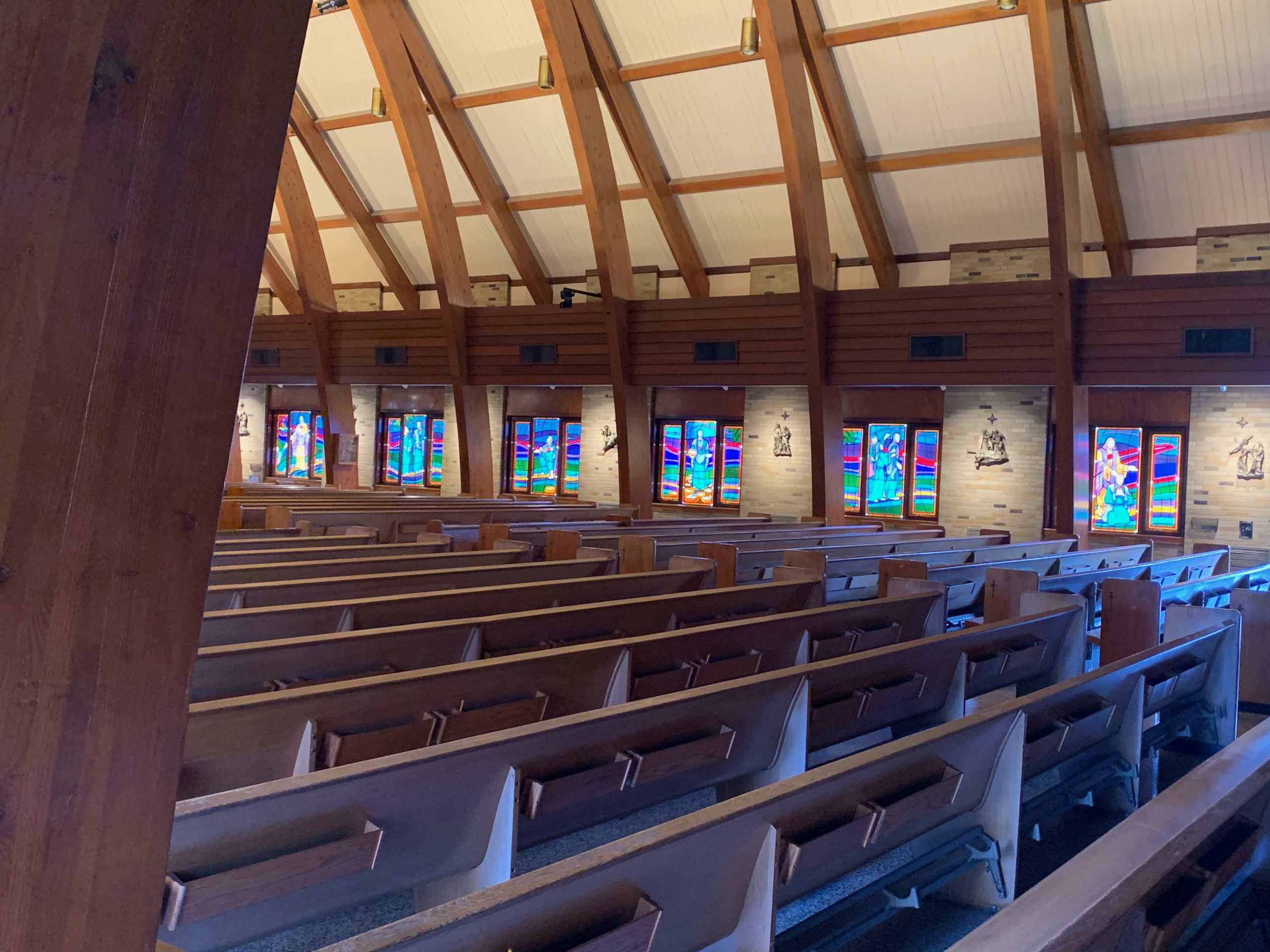 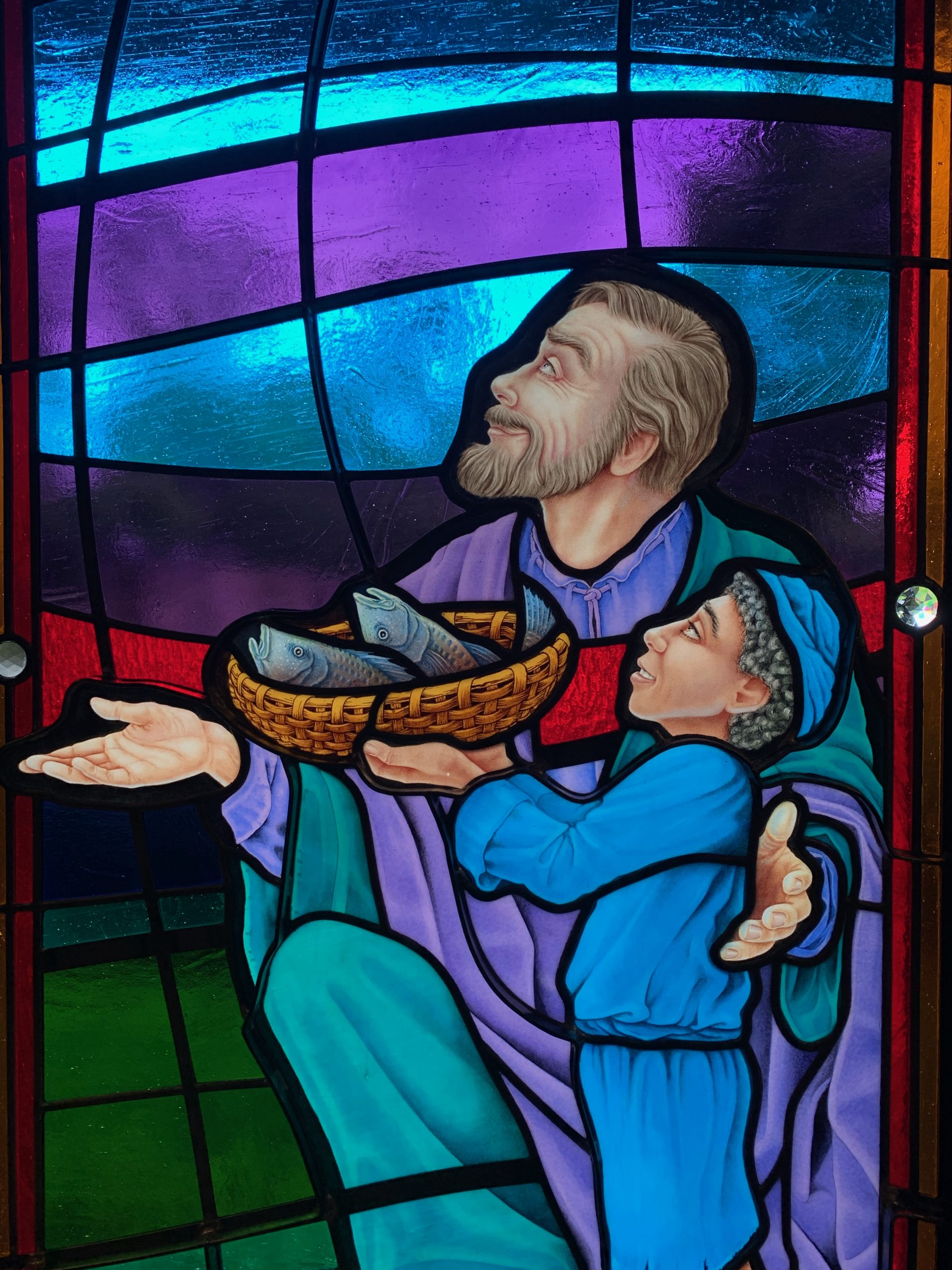 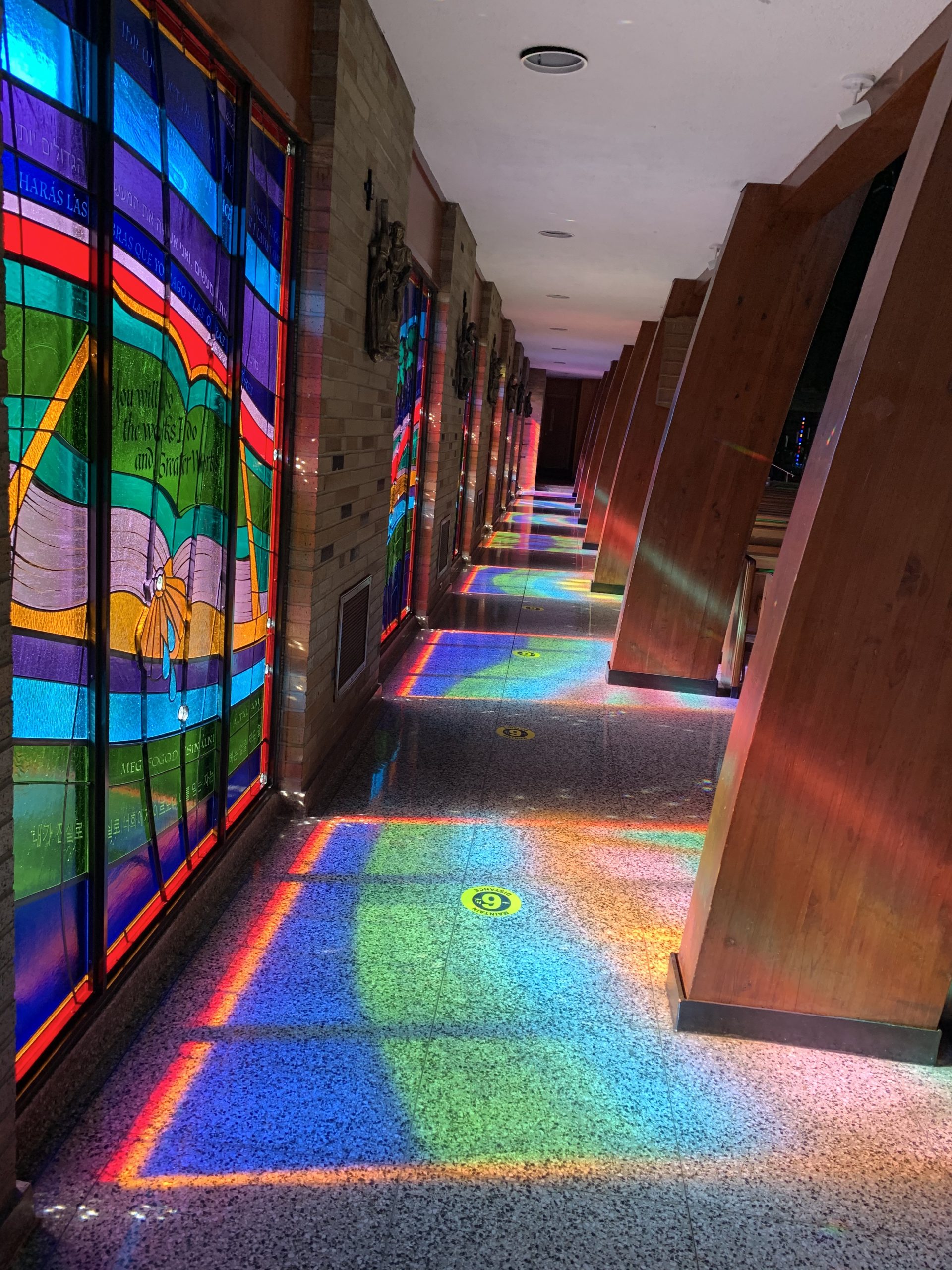 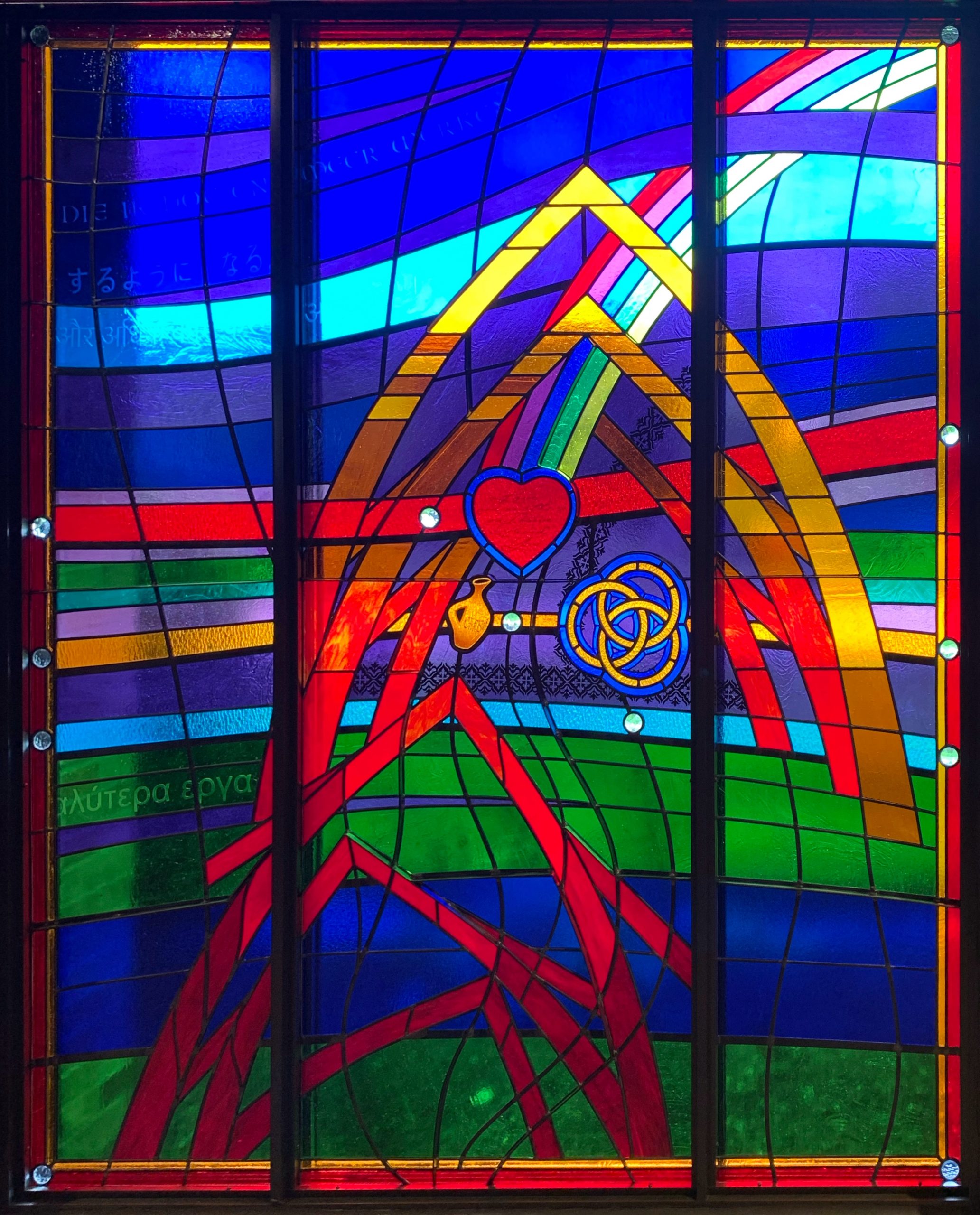 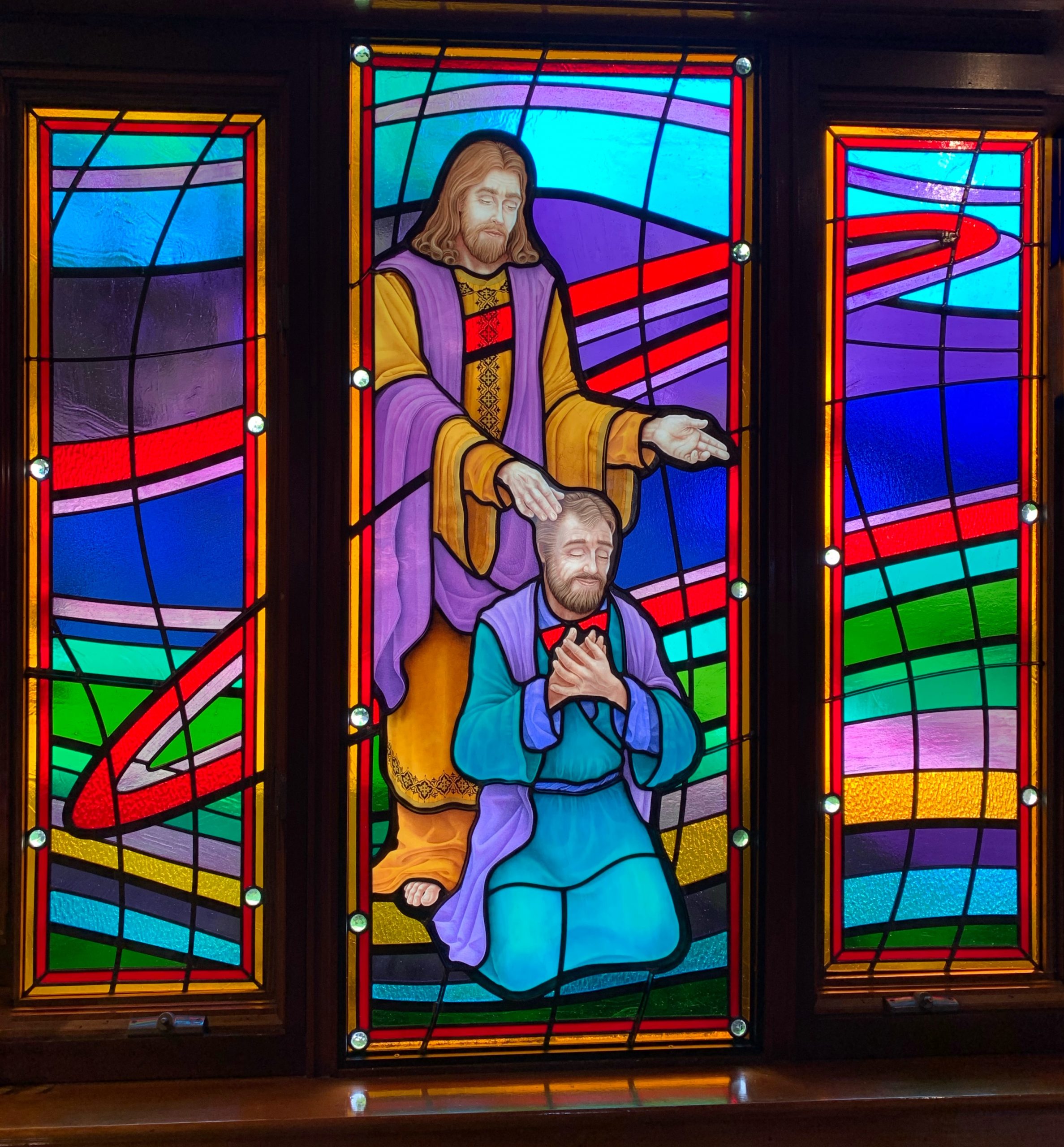 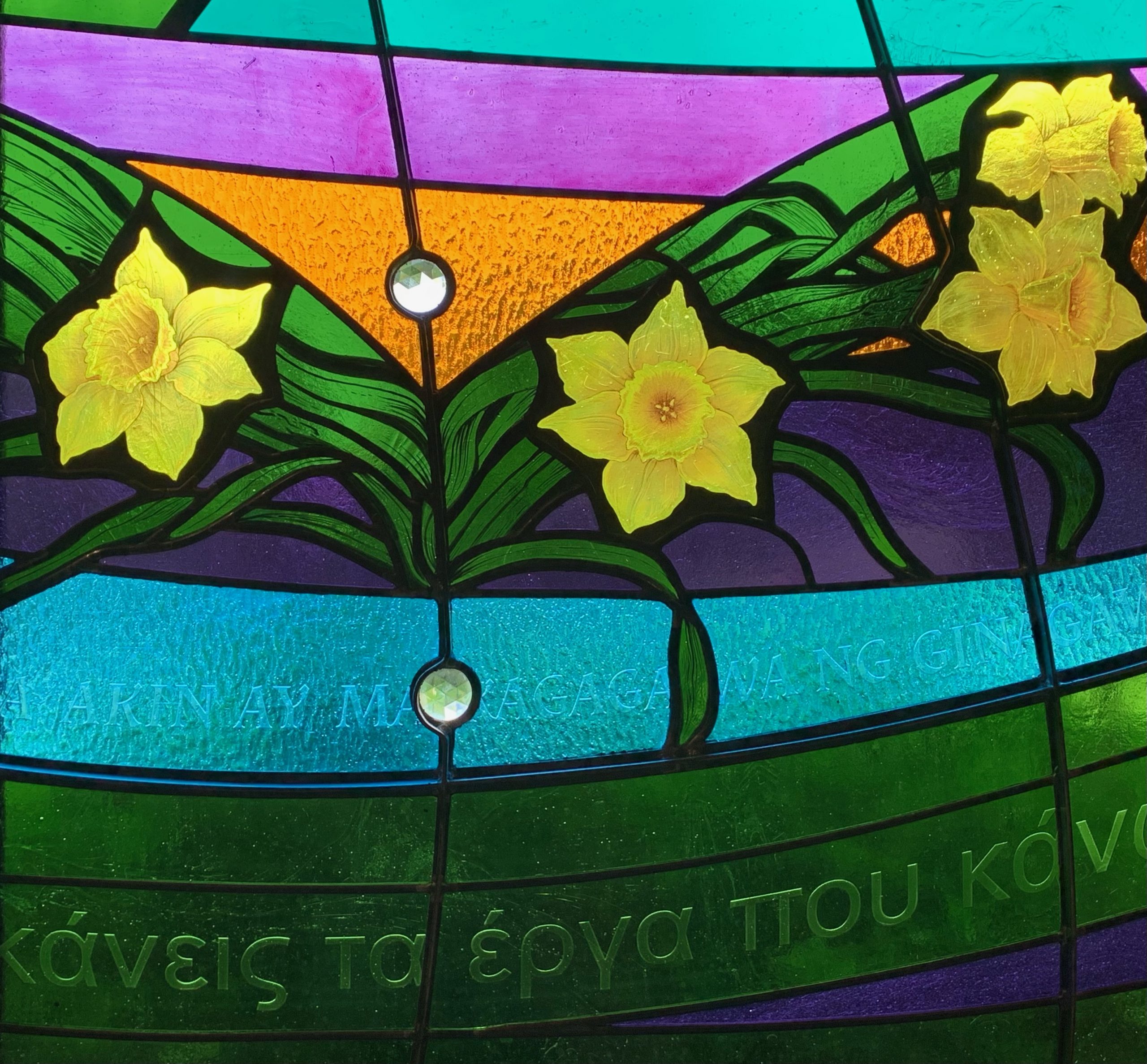 The project consists of 39 panels of new art glass, making up 13 scenes that tell the story of the parish’s patron saint and of their own journey of putting love into action. The clockwise window journey depicts the call to discipleship found in the Scriptural encounters that St. Philip had with Jesus, ending with Jesus telling Saint Philip, “You will do the works I do and greater works.” The mission to continue Christ’s work, which is the mission of the parish, is depicted through more abstract windows on the west side of the church. The artistic style of these windows is contemporary and symbolic. Reading from east to west, the story is told from God’s call in the Glory of Christ to our fullness of Glory in the promise of our heavenly home. The first window begins the storyline, which is told through ribbons of color. For example, the red ribbon of color embraces the heart of Christ and flows through all 39 panels as the story unfolds of the journey to eternity. Along the ribbons of color are placed Swarovski crystal prisms & cast glass jewels that create ever-moving rainbows within the church.

St. Philip the Apostle Church was first built in 1954, then rebuilt ten years later after it had burned down. While the south-facing windows were made of dalle de verre glass, the east & west windows, designed by the architect, consisted primarily of frosted seedy glass set in angled, abstract patterns with occasional pieces of colored seedy glass. The frosted glass created a significant amount of glare, which became blindingly bright as the sun set, particularly in the summer. The goal was to replace the east and west windows with new art glass that would reduce the glare while adding much-needed color and art to an otherwise neutral color palette of bricks and wood. An important goal was for the art to as inclusive and engaging as possible so that parishioners would be able to interact with the art and see themselves in it.

Artsphere Consulting served as the art consultant and assisted the pastor in the creation of a committee that would help guide the creation of this work of art. The consultant used a Theological Reflection process to help determine the theme of the new windows. Through a process of prayer, reflection and discussion, the committee eventually decided on the theme for the new windows: “Our Call and Journey - Love In Action”. The theme provided general guidance to the artists without dictating the imagery to be used, which was to be a combination of traditional and contemporary art glass. There was a lengthy design process, which included many discussions between the committee and the artists at ButlerVargo. An architect also helped redesign a reconfiguration of the west windows and took care of all the logistics relative to preparing the space for the new windows. Once the design was approved, samples of glass and techniques were shown to the committee to keep them fully informed of the process. However, the artists were given artistic freedom to enhance the windows through the fabrication process, which they did, for an outstanding result.

Traditional painting techniques, with multiple firings (sometimes as many as ten times, at different temperatures), were used throughout the windows. On the east side, opalescent glass was used for the figures to help them stand out from the background and to make the painted portions visible both during the day and at night. There was extensive use of etching and fire polishing on the west windows, including for the translation of the text “You will do the works I do and greater works” into 17 different languages. Every attempt was made to make the art as inclusive as possible, not only through the foreign languages but also through the depictions of the figures and the inclusion of symbols that would be welcoming to the LGBT community.