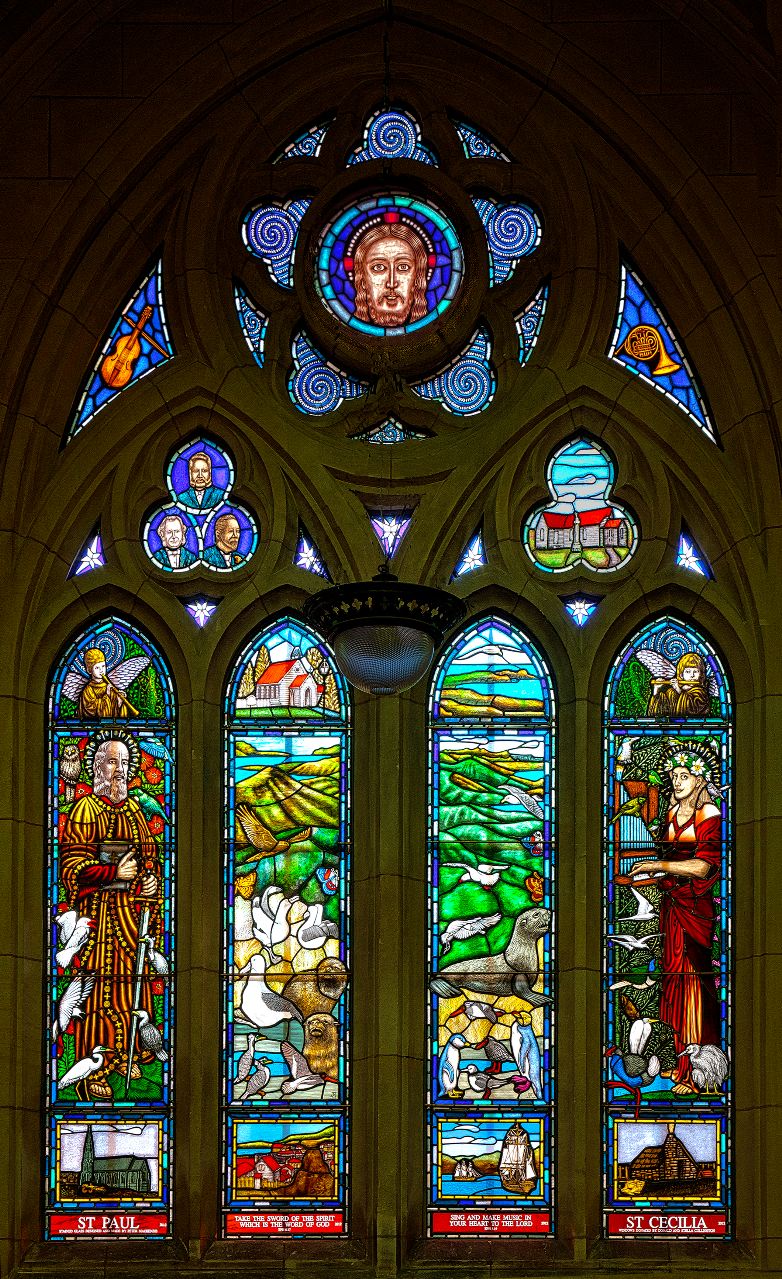 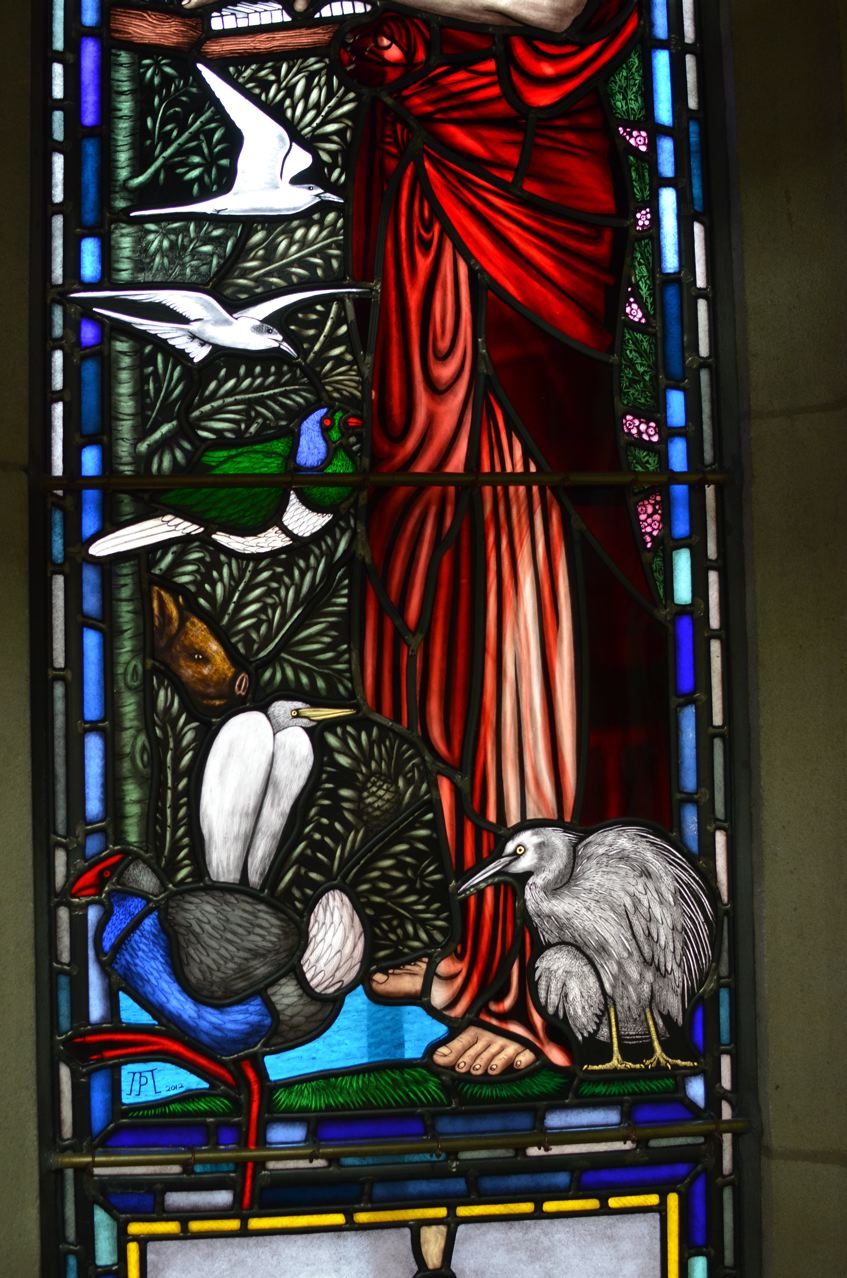 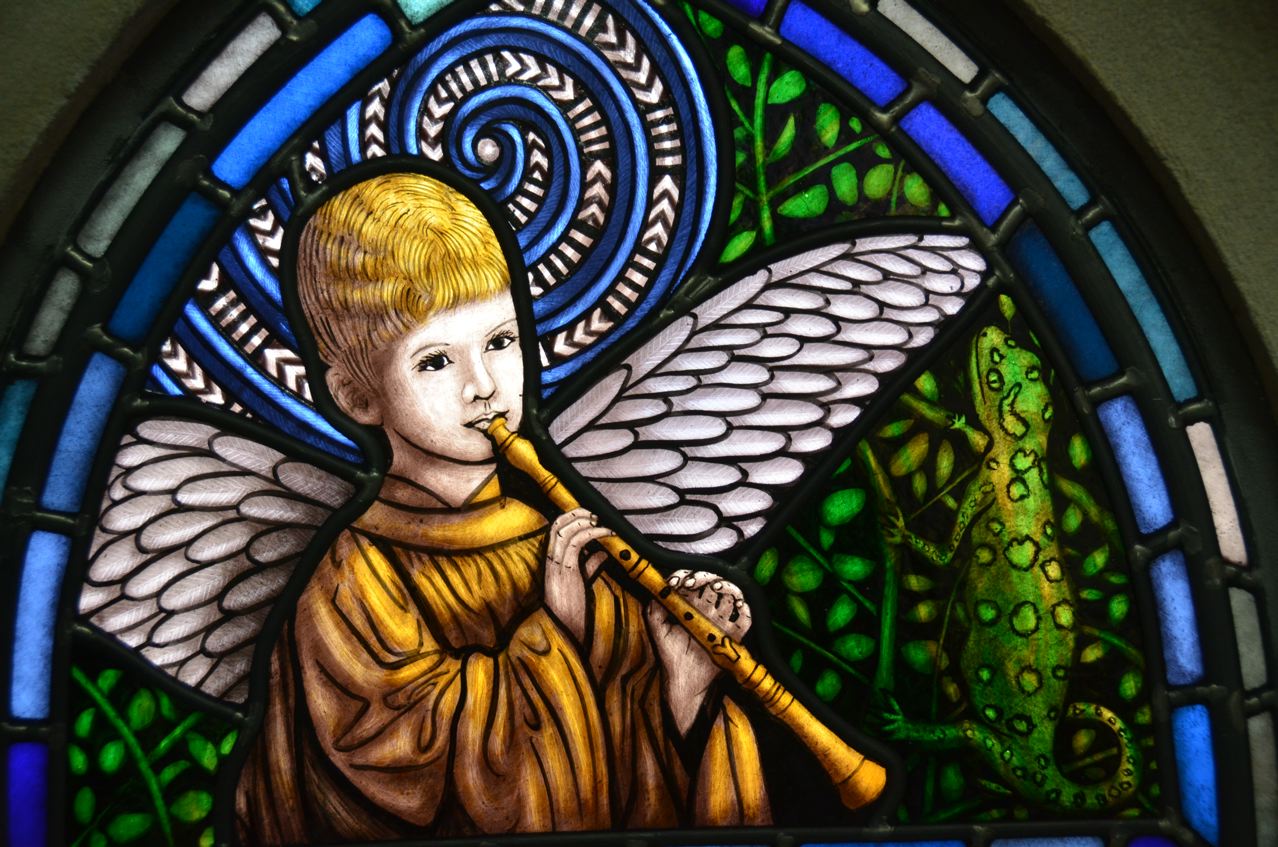 Developing a stained glass window concept to embody the culture and history of Dunedin, with reference to the people of Aotearoa/New Zealand, its landscape, flora and fauna. To illustrate the importance of Christianity's arrival and spread in Otago, and the importance of music to the celebration of life and worship within the Anglican Church. To make a place for St Paul in the Cathedral, as he was not formerly represented, and to also represent patron Saint of music St Cecilia, in what is an acoustically wonderful music venue hosting worthy recital and concerts in this Scots-settled city of the South.

The Dunedin Window concept was large and unconventional design challenge, fitting a complex contemporary Antipodean set of imagery into a large Gothic cathedral with traditional vaulted ceilings and complex stone traceries - and building speaking of another time and place. Within that fabric was an array of mostly English stained glass dating from the late 1600s to the early 20th century, much of it from the top English studios, including Whitefriars. The new work had to sit comfortably within this Eurocentric historical canon, but speak to the modern spirit and aspirations of the blended culture that is modern-day New Zealand/Aotearoa. To this end, the images were arranged to sit comfortably within the lancets, trefoils and other shapes of the stonework, but speak the language of the building's users and reflect the world they know and love in Europe's Antipodes. Hence distinctly Aotearoa animals abound, the city's harbour is set in glass, bookended between St Paul and St Cecilia. St Paul is represented by beloved Anglican Bishop of Dunedin Kelvin Wright, holding a bible and sword, while St Cecilia is represented by living New Zealand treasure, renowned soprano Dame Kiri Te Kanawa, a perfect blend of the Polynesian and Pakeha peoples.

The success of the Dunedin Window project relied entirely on the successful relationship between its commissioners, music aficionados Drs Stella and Donald Cullington, and the artist and stained glass maker, master glass painter Peter Mackenzie. The critical collaboration started two years before the window was consecrated with a discussion of how the modern vision of the Anglican Church of Aotearoa/New Zealand could be illustrated in glass. Scale drawings were made and approved before glass was selected and ordered from the Verrerie de St Just in France to get mouthblown glass made to suit. A year was spent researching, photographing, drawing and secretly obtaining the consent of Dame Kiri to be part of the project. The Anglican church embraces Maori, Polynesian and Pakeha culture as part of its mission and the window's characters and motifs had to express that. Hence the involvement of Dame Kiri and the inclusion of pioneer whaler Johnnie Jones and missionary Tamihana Te Rauparaha, among others. Many scenes of the province of Otago's early pioneering days are included, including a Chinese gold miner's cottage and Dunedin street scenes from the 1800s. The local landscape and especially its wildlife also distinguish this project as truly reflecting its community.

It is not an understatement to say the collaboration of client and artist was a tear's work and the key to success. The to and fro of ideas, sketches, photographs and suggestions was continuous and reflected the broad scope of imagery and themes. A breakthrough development was the generosity of wildlife photographer Stephen Jacquiery in supplying his best images of local creatures to use as reference for the project. This informed the birds' and animals' accurate portrayal. There are a handful human portraits in the project, but also more than 30 valid portraits of native creatures unique to this land.