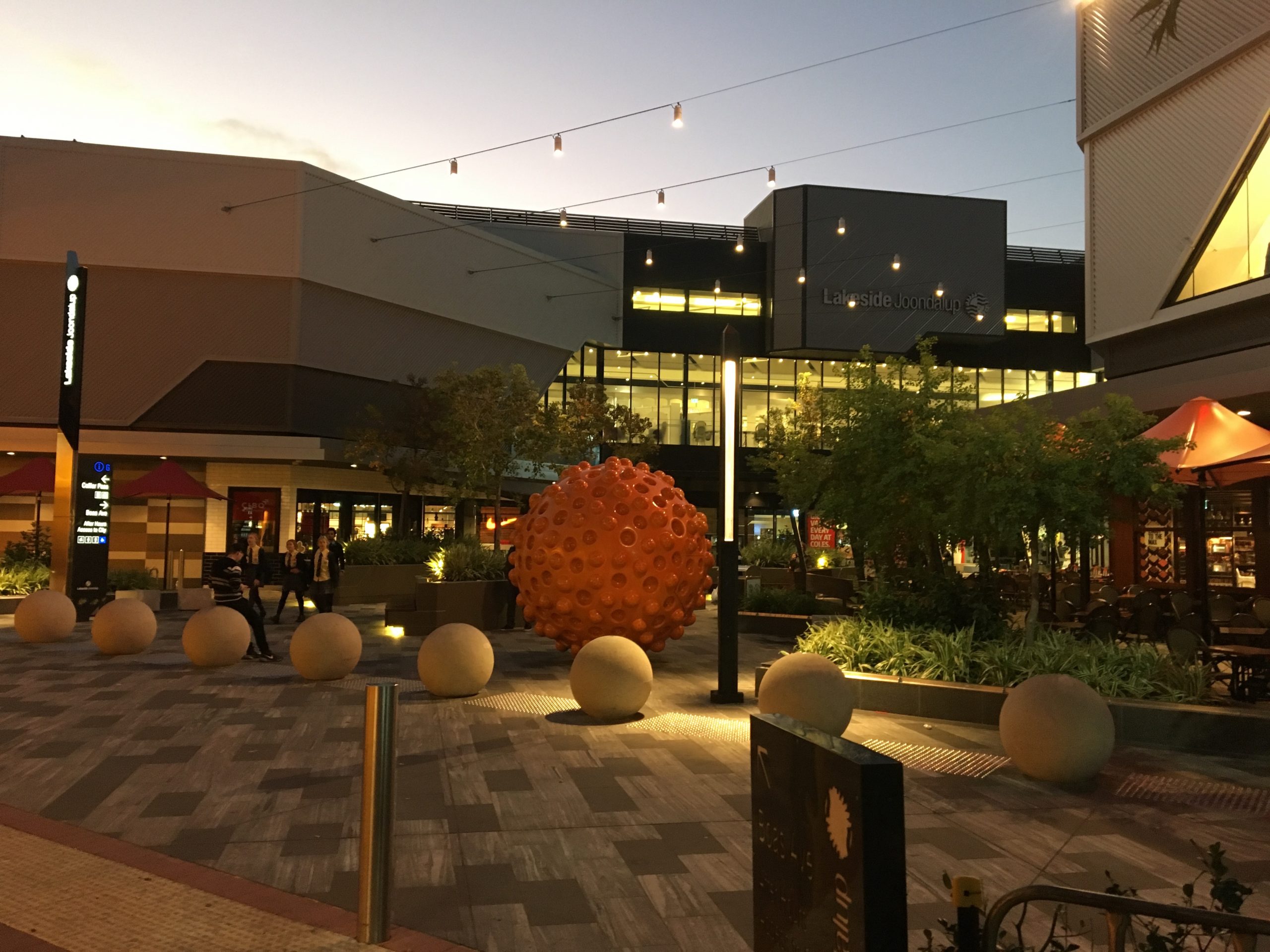 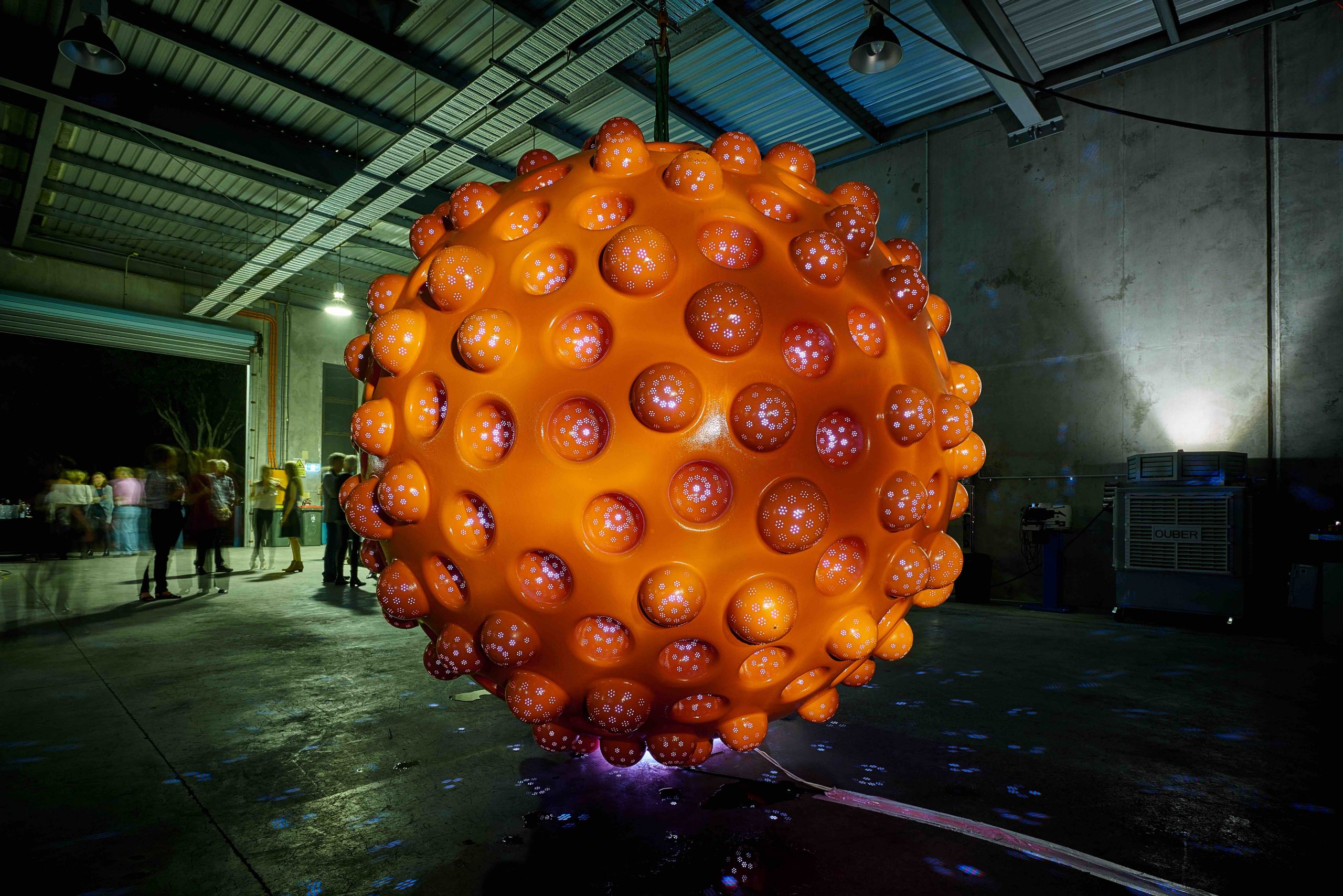 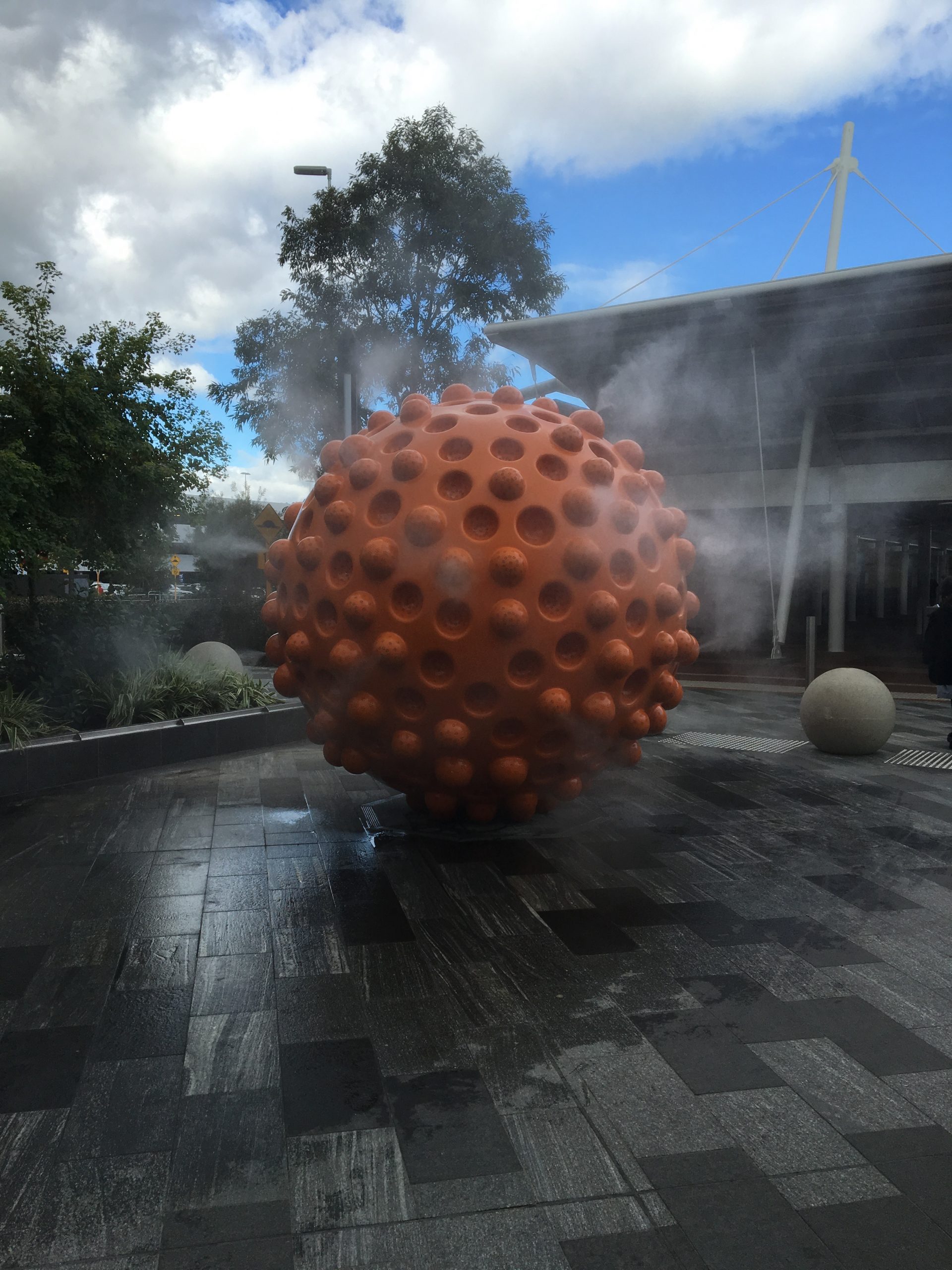 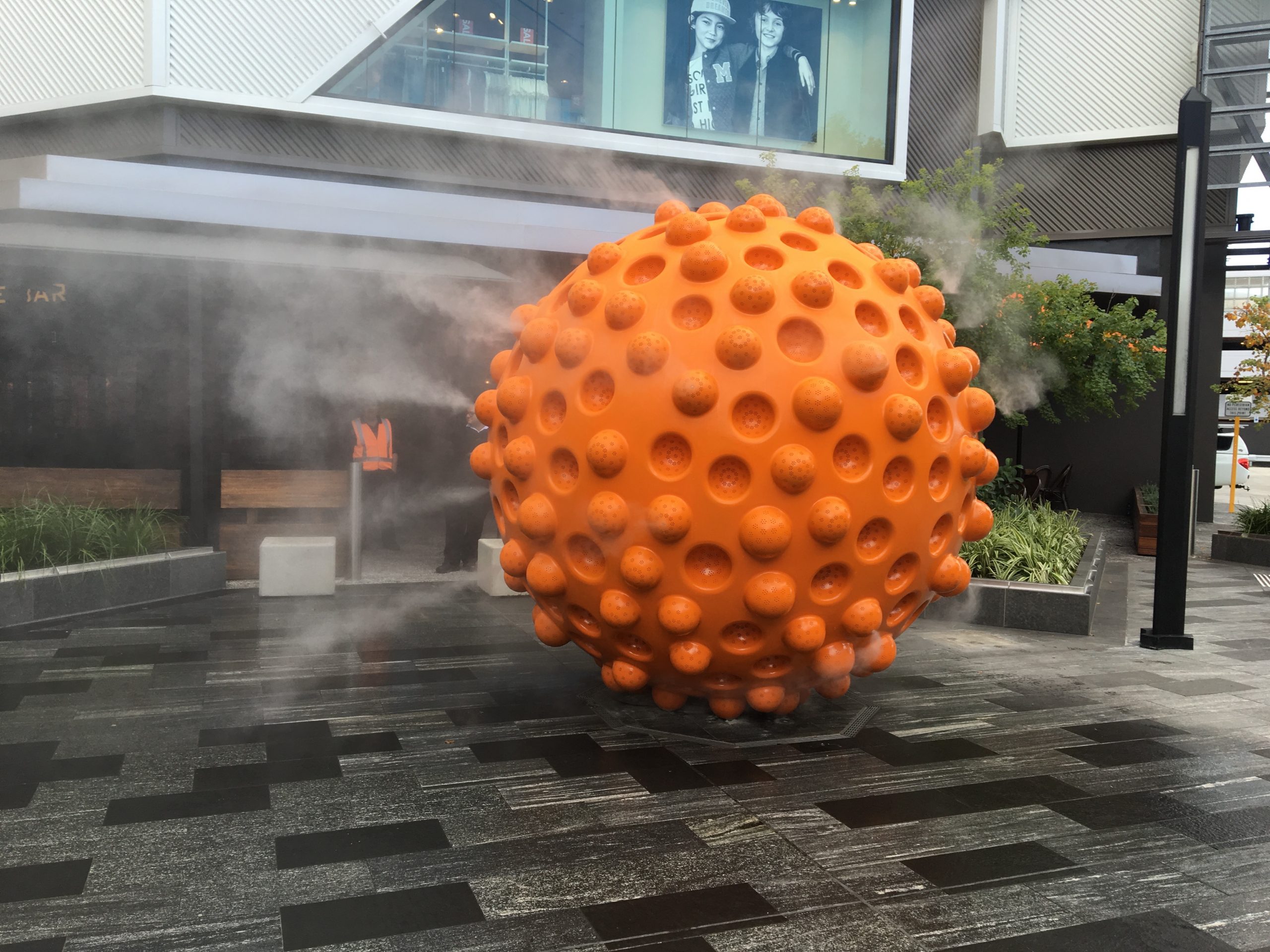 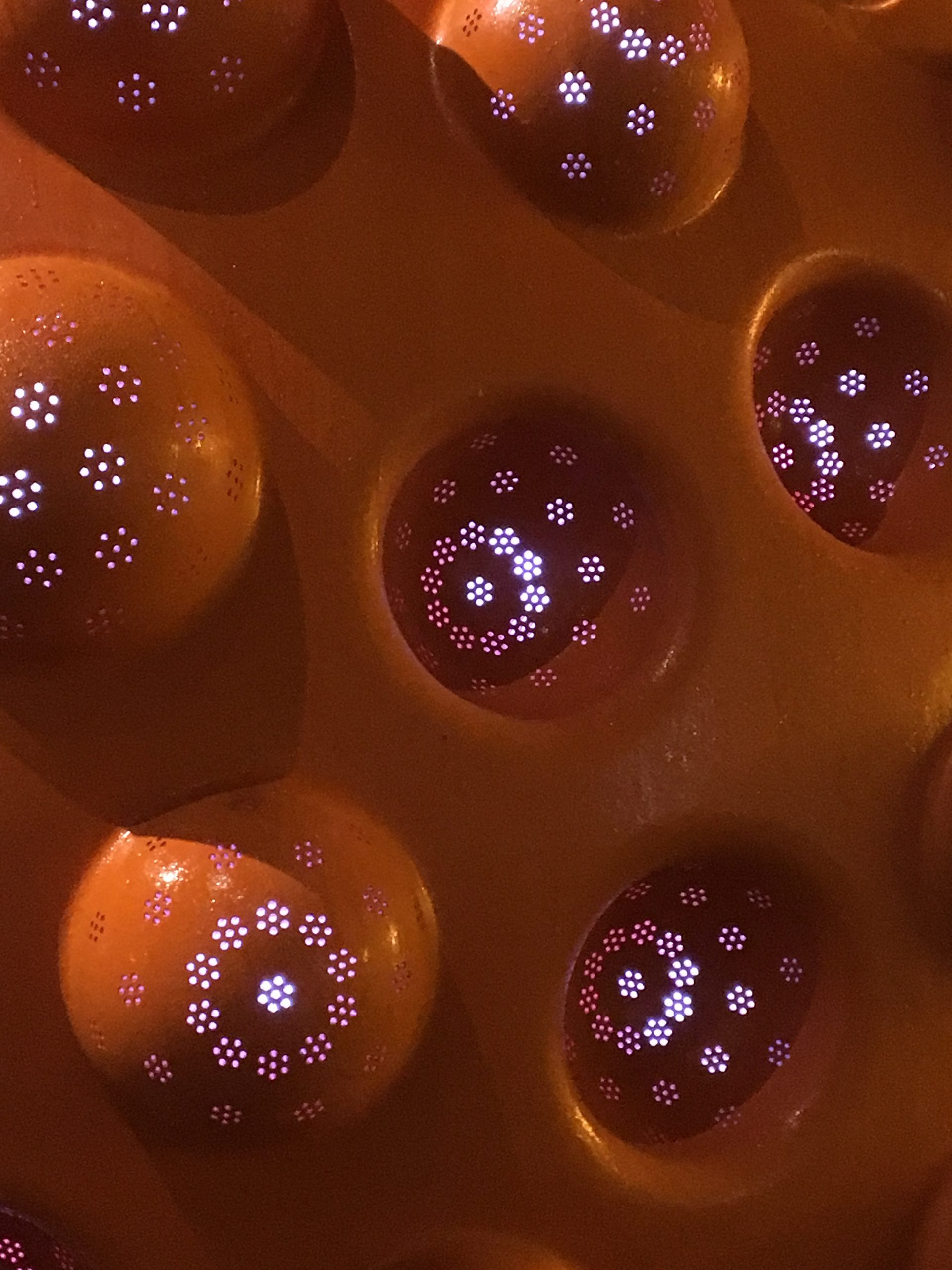 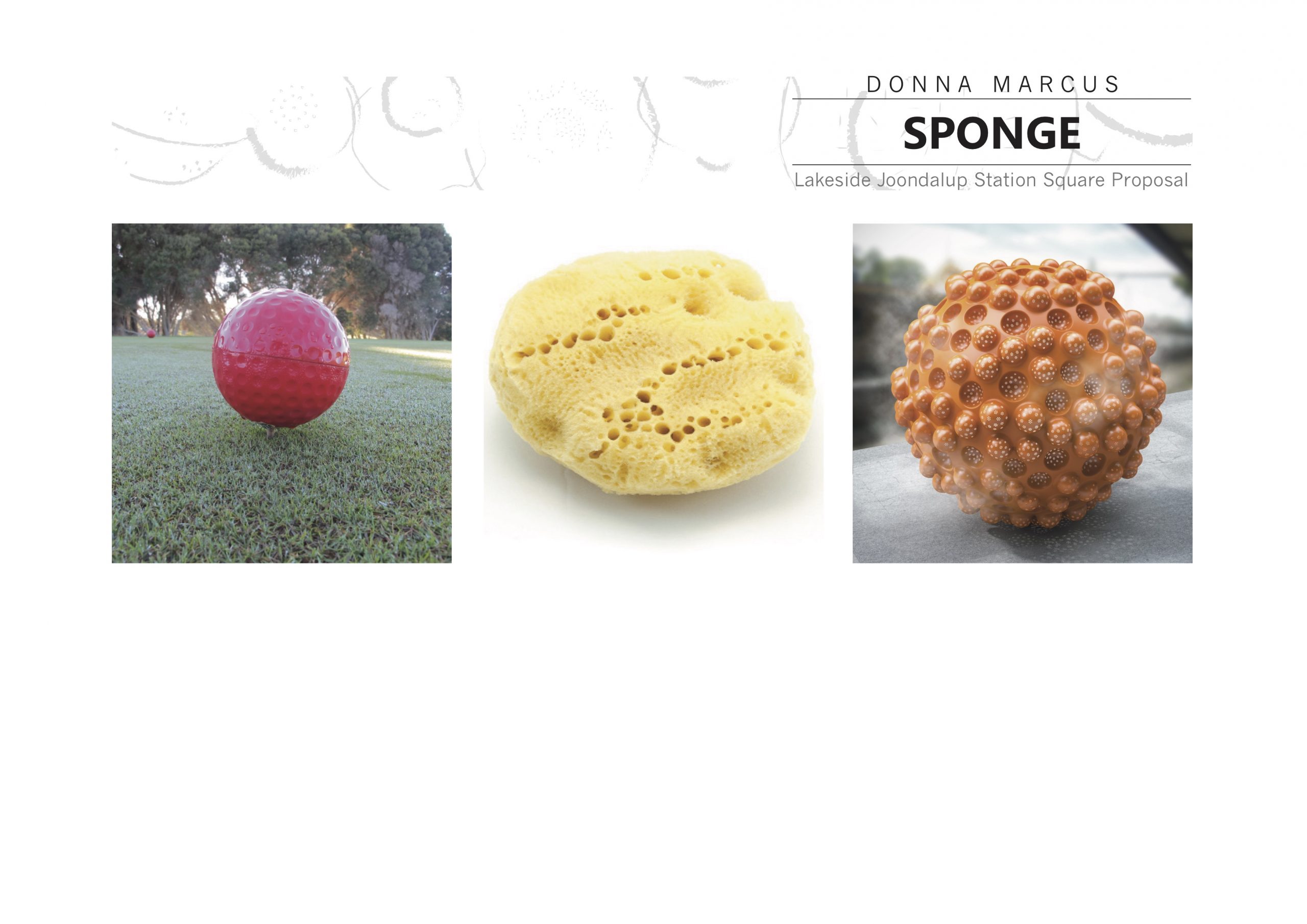 Sponge is 3m in diameter. The surface consists of perforated colander forms orientated in both convex and concave attitudes producing an undulating topography. For robustness and durability cast aluminium components of approximately 10 mm thickness were used. The sculpture feature internal LED lighting and water misting emitted through the colander surface with its perforated numerous small holes. As the small volume of potable water used is finely atomised, most of it will dissipates but some water is collected by a circular trench grate surrounding the sculpture. The water mist is 'seasonal' activated in summer.

Marcus’ sculptures with their familiar forms gleaned from the private realm and re-imagined in public space, draw viewers back into their own worlds and memories. The undulating topography of Sponge mimics the surface of a golf ball and a sea sponge continuing the artist’s interest in the overlap between the aesthetics of the organic and the mechanical. Sponge invites interaction through its form, colour, surface and gentle water misting. The work inherently represents abstracted and layered contextual meaning relevant to the community and the idea has grown from the consideration of the following:
1. The existing centre with its soft (tent like roofs) and hard surfaces 2. The growth of the area as a centre of domestic life
3. The wild and beautiful coastal topography
4. The nearby Western Australian Aquarium
5. The 'orange ball' sea sponge that is native to Western Australia
6. The 'golf ball' sea sponge
7. The geometry of golf balls and reference to this important local recreation pursuit.

This project was commissioned by Lend Lease for Lakeside Joondalup, Western Australia. The artist consulted initially with Lend Lease Principal Architect, Darren Kinderchuk with whom she had previously worked on True North for Canelands, Mackay, Queensland. The work was project managed by architect Fred Cehak for Griffith University. Fred has project managed most of Marcus' work since they collaborated on her work Steam for Brisbane Square in 2016. Sponge also gave the artist the opportunity to work with master craftsman Mike Mooney and his firm Stainless Aesthetics to fabricate the work. Mike oversaw all areas of production up to and including the final installation of the work (after making its long journey by road from the East to the West Coast of Australia).

The field of public sculpture rarely considers the private sphere. Donna Marcus’ Sponge located in Station Square Joondalup, Western Australia, is a 3 metre diameter site specific large-scale spherical sculpture comprised of life-size kitchen concave and convex colander forms. The scale and shape of the work recalls futuristic forms like sputniks, reminding us that aluminium is the linking modern substance of the space age (the material of flight and kitchen implements). In this way, Sponge references modernity, modern processes and their impact on domestic life in a playful and allusive way.