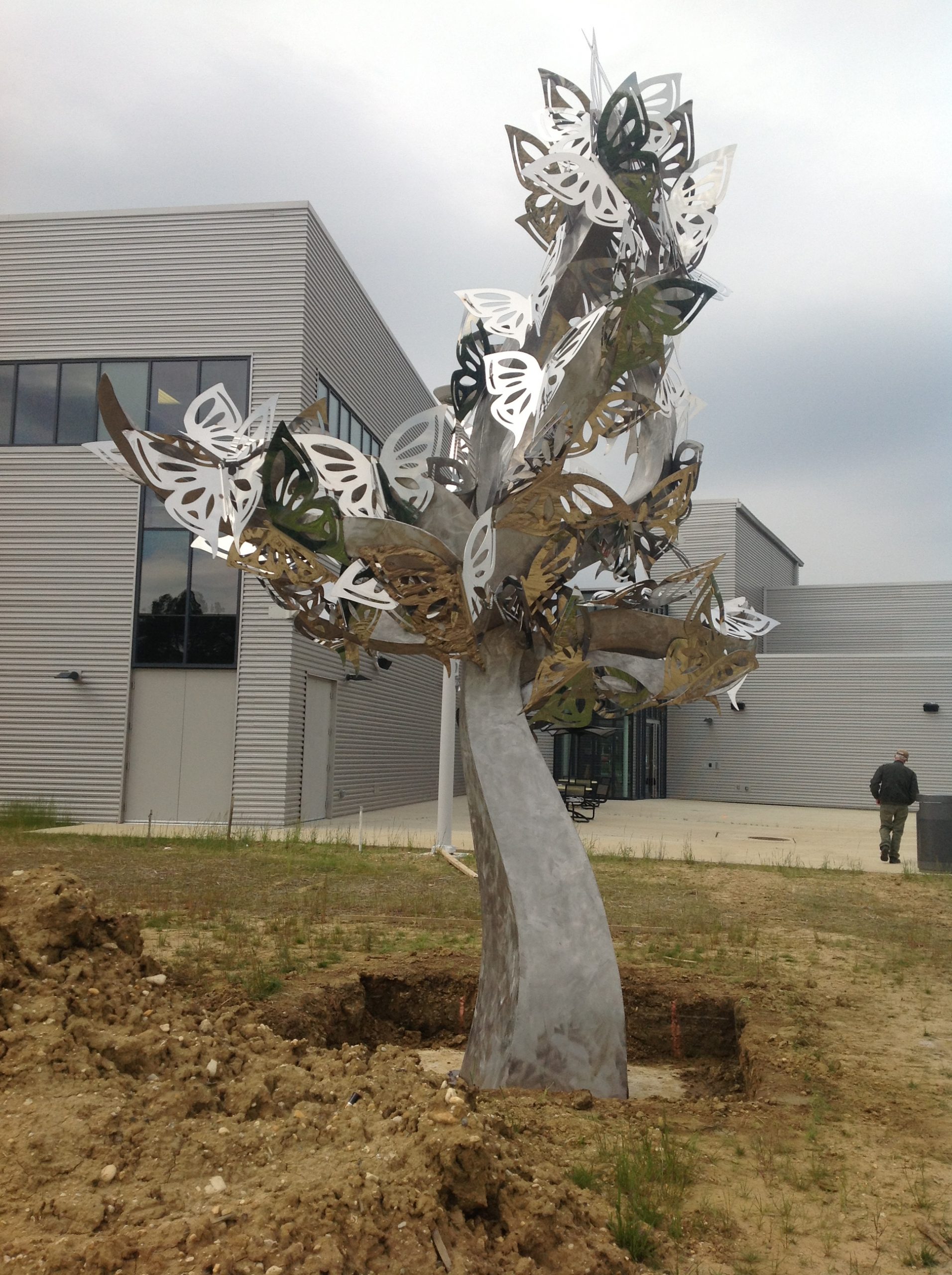 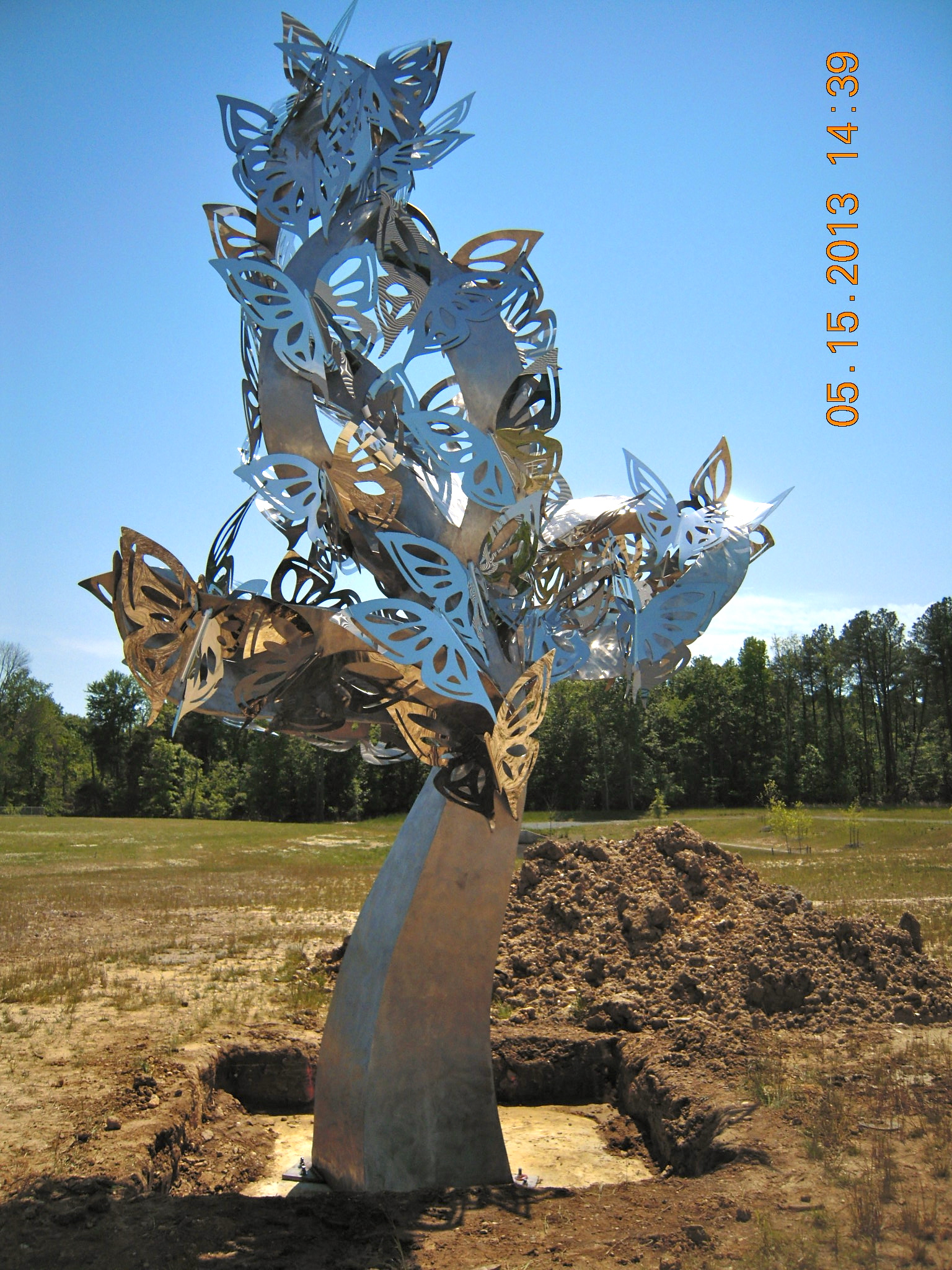 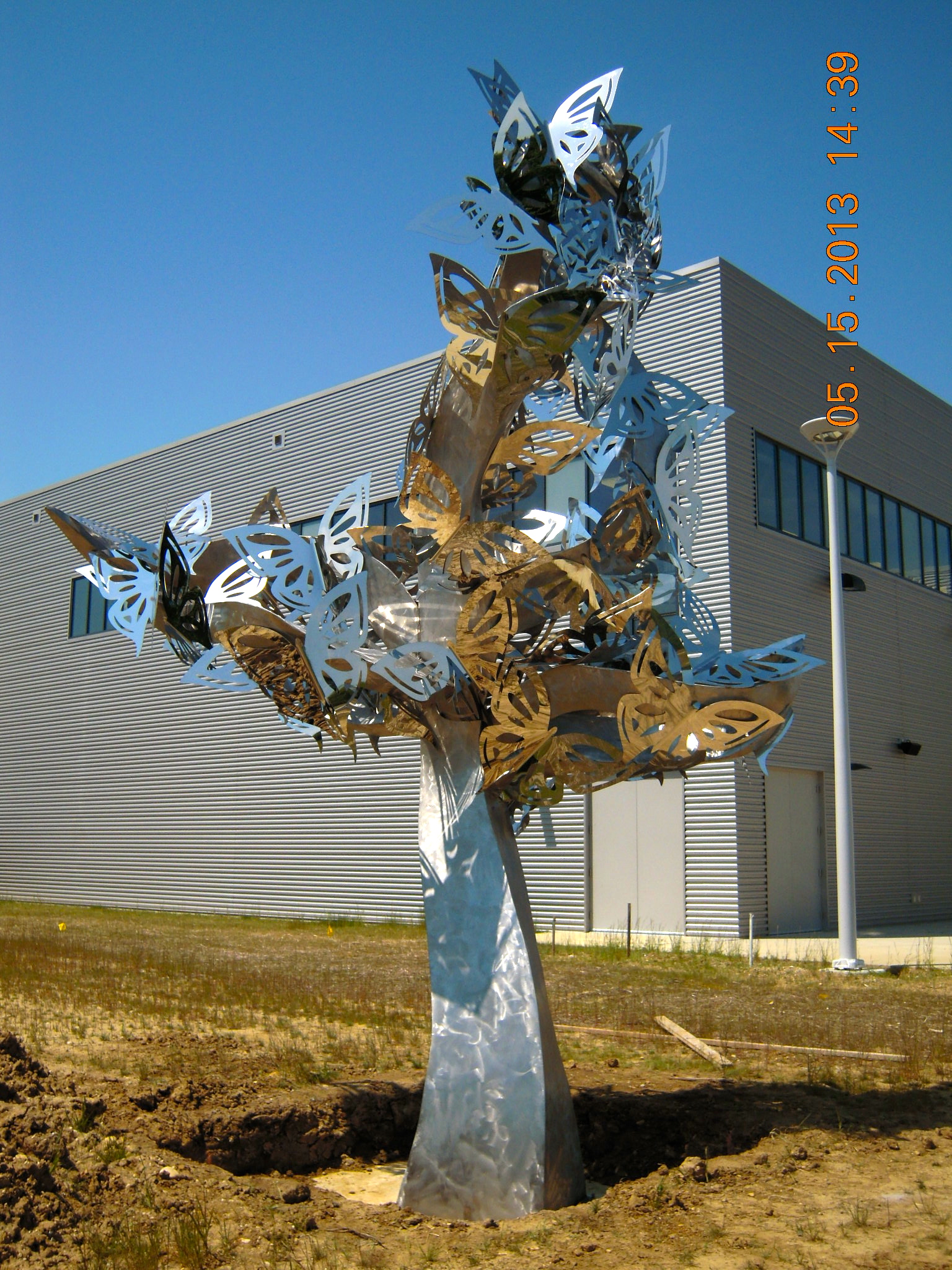 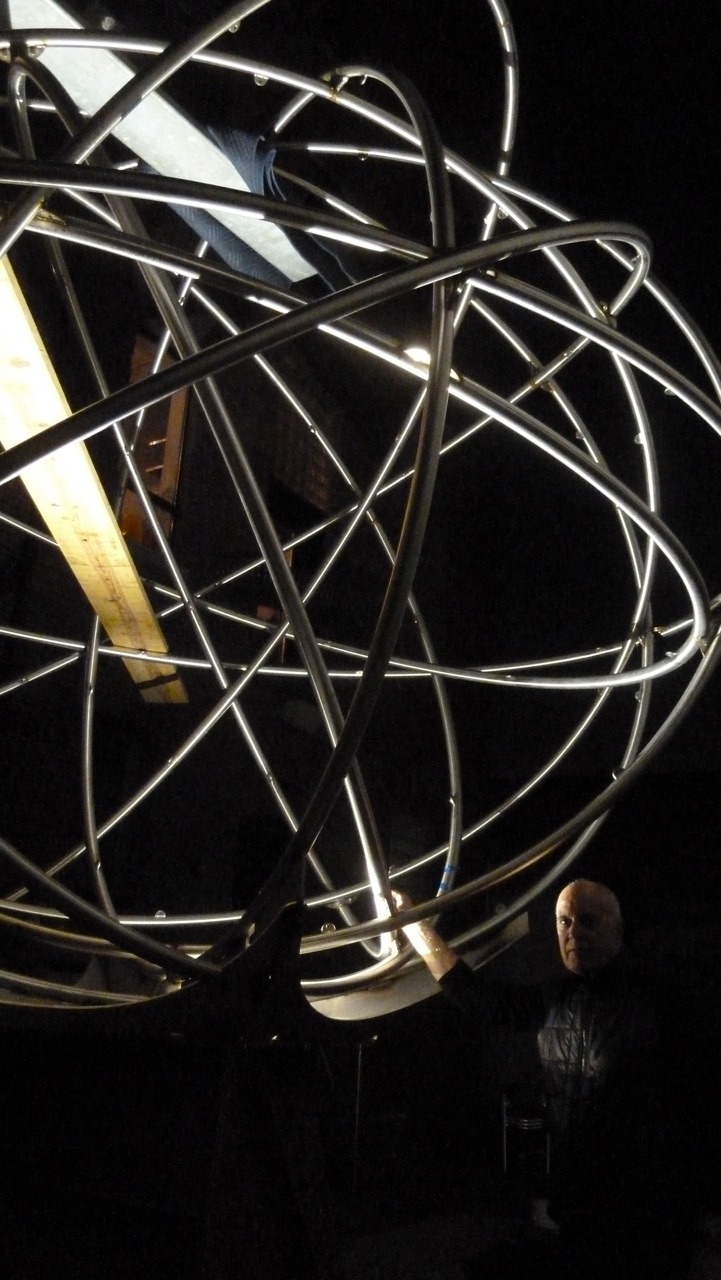 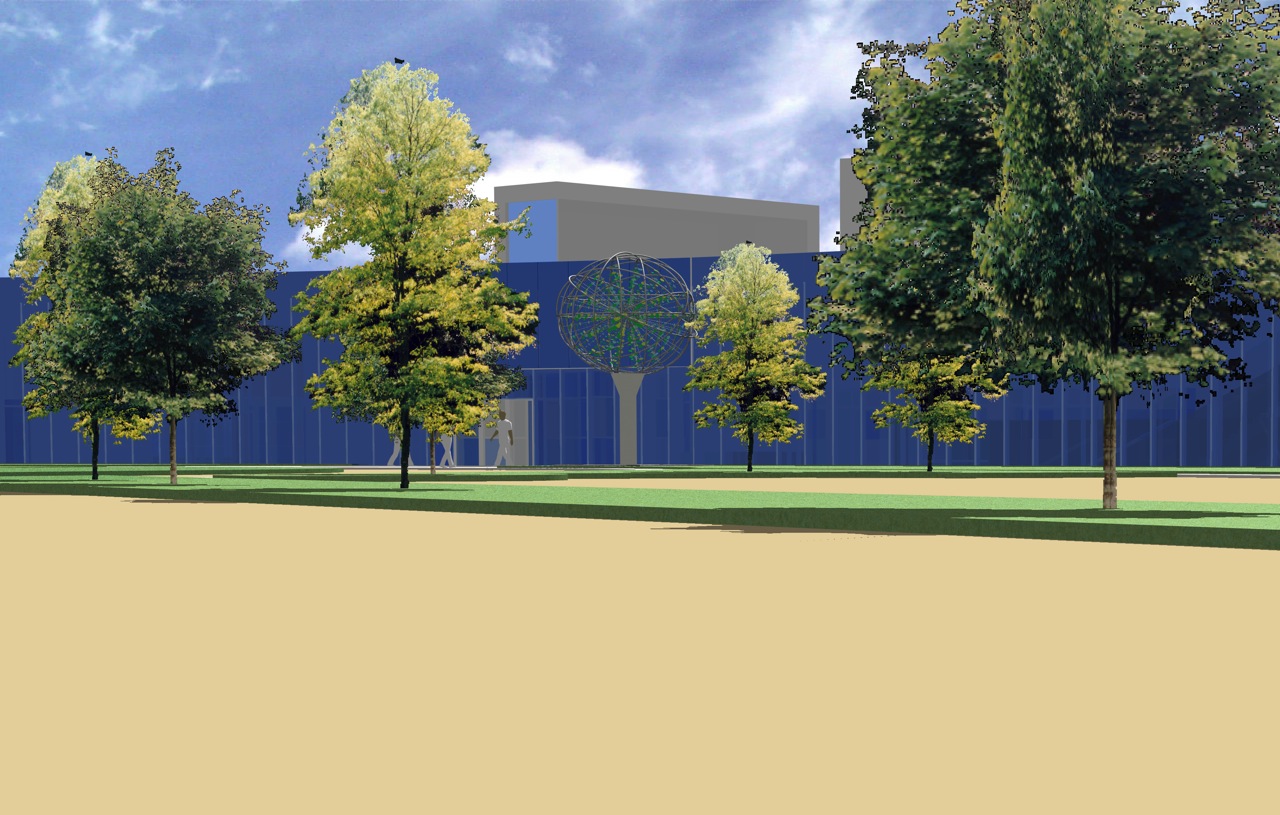 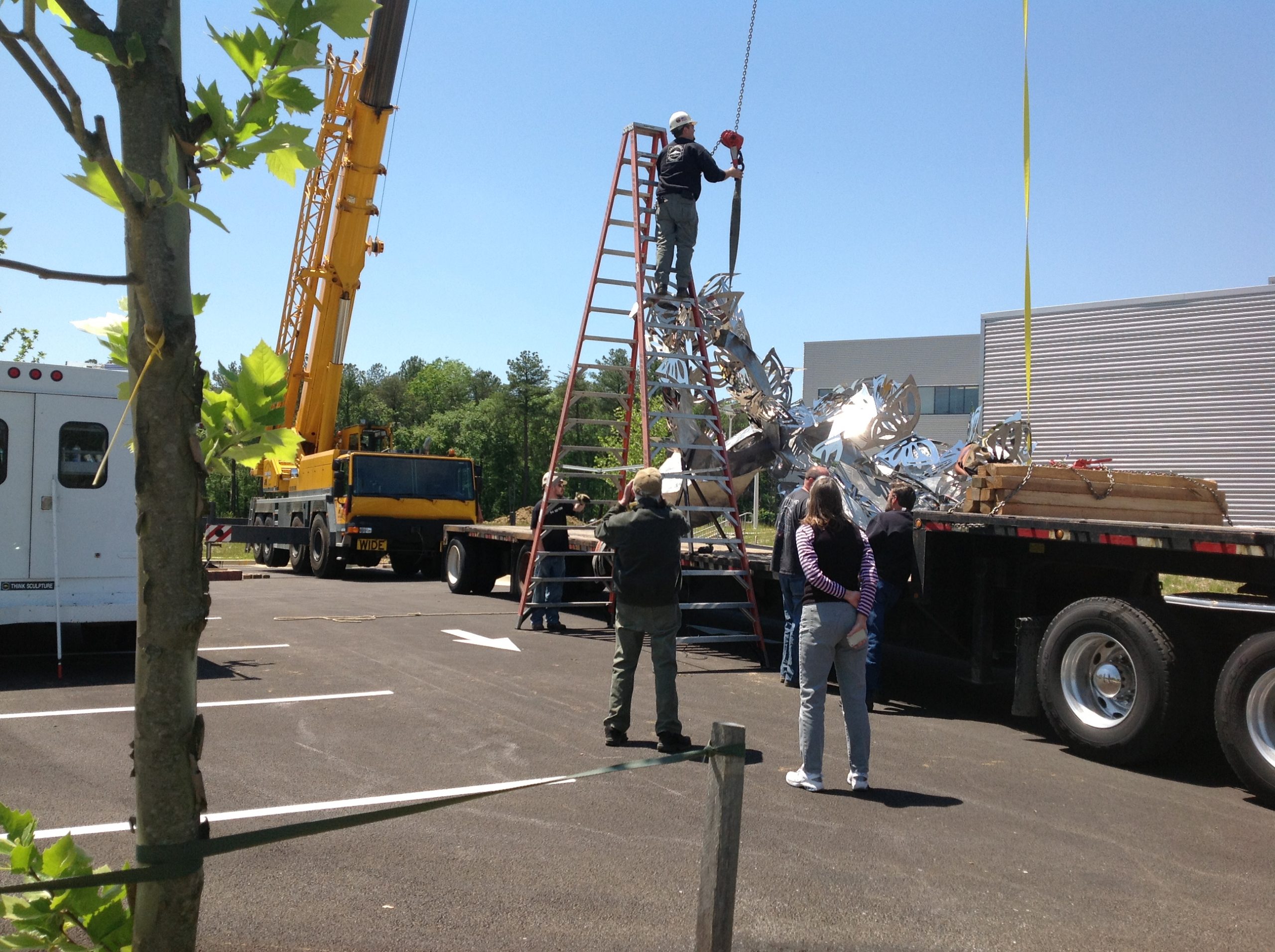 Sited on the outside of the Southern Regional Technology/Recreation Complex in Fort Washington, Maryland , “Butterfly Tree,” by artist Judy Sutton Moore, is a 20 foot stainless steel structure which curves upward from a four-sided trunk to three major branches. Each branch consists of three undulating triangular shaped branches. Covering the branches are fifty highly polished stainless steel butterflies, each measuring 4′ by 3′. The mirrored finish of the stainless steel coupled with the stylized representation of a tree and butterflies provide a visual push-pull between the technological/contemporary design of the built environment embraced within nature.

From the outset, including artwork in the plan for the Complex was integral. The Complex was envisioned as an exciting technology oriented state-of-the-art public recreation facility along with athletic fields, multipurpose courts, picnic areas and trails that serve as a major draw for Prince George's County and beyond. The Complex's site and programming influence its overall design and the design of the artworks that reside there. "Beacon" (scheduled for mid-June 2013 completion) was designed and sited to act as a place-maker, acting in concert with the facility to announce the presence of a special place, inviting patrons, through its lighted sphere, to come onto the grounds and into the modern, high-tech facility. Once entering the front doors of the facility, one sees "Butterfly Tree" (completed project for this application)on the outside in the distance, adjacent to the patio, providing a lush reminder of the walking trails, fields and wooded areas nearby. As a whole, building, grounds and artwork respond to the Department of Parks and Recreation's commitment to wellness as it applies to physical and mental wellbeing, living in sync with the natural environment, and acting responsibly for the preservation of the earth.

Preliminarily, a number of potential sites for art placement were identified for areas both inside and outside of the building. A Call for Artists was issued, soliciting artists from the Greater Mid-Atlantic Region to submit qualifications for the outdoor spaces. A panel comprising two artists, several community stakeholders, the M-NCPPC supervising architect and other facility stakeholders was convened to review images of artist applicants' work and their support materials. Based on this process, artists Judy Sutton Moore and Ray King were selected to move forward to meet the panel and members of the architectural team in person and have dialogue to develop their projects. With regard to the "Butterfly Tree" project, Judy developed her preliminary proposal which was approved, after a presentation to the selection panel. Thereafter, she met onsite with the architectural team and contractors to fine tune the artwork site location and coordinate other matters. Throughout the whole process, there was vigorous interaction among the various members of the project team, including the artist, particularly on matters of engineering. At the half way point, members of the team visited the factory in Lancaster, Pennsylvania to view the artwork's fabrication.

As plans for the "Butterfly Tree" developed, community participation was quite active, including membership on the artist review panel as well as attendance at subsequent meetings and reviews during the various stages of artwork development. Community engagement throughout the process was insightful, productive and enthusiastic, making for a marker of pride for both the community and the artist. A butterfly garden is now being planned for the grounds and we anticipate more spin-off projects and activities to occur due to the excitement generated by the "Butterfly Tree" and the community's overwhelming embrace of the artwork.