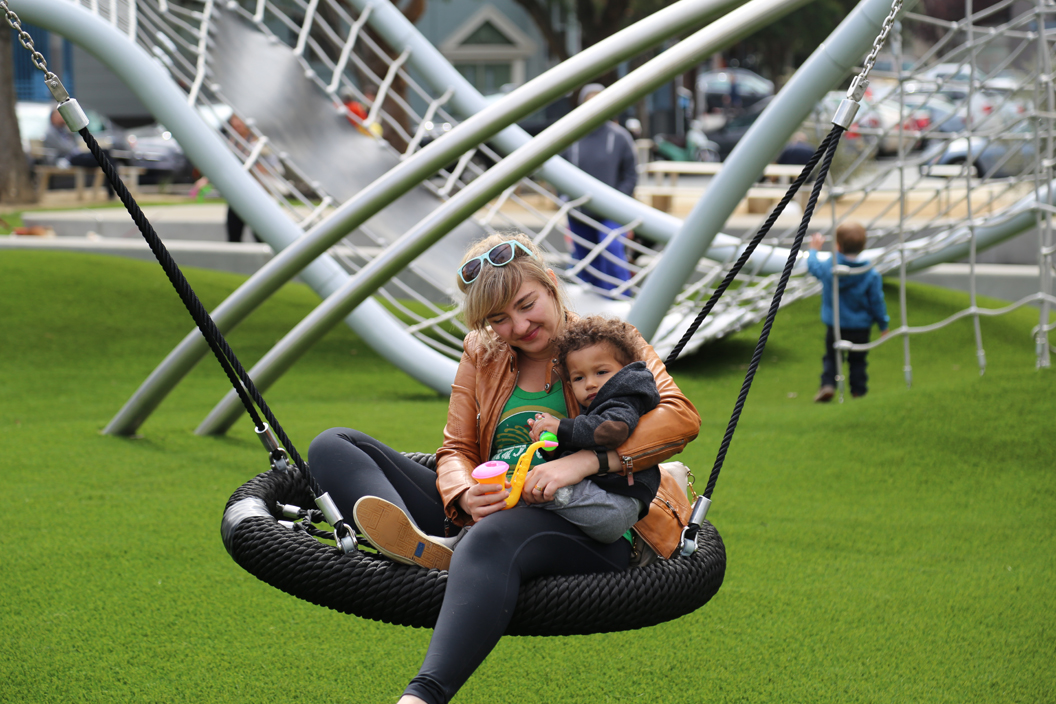 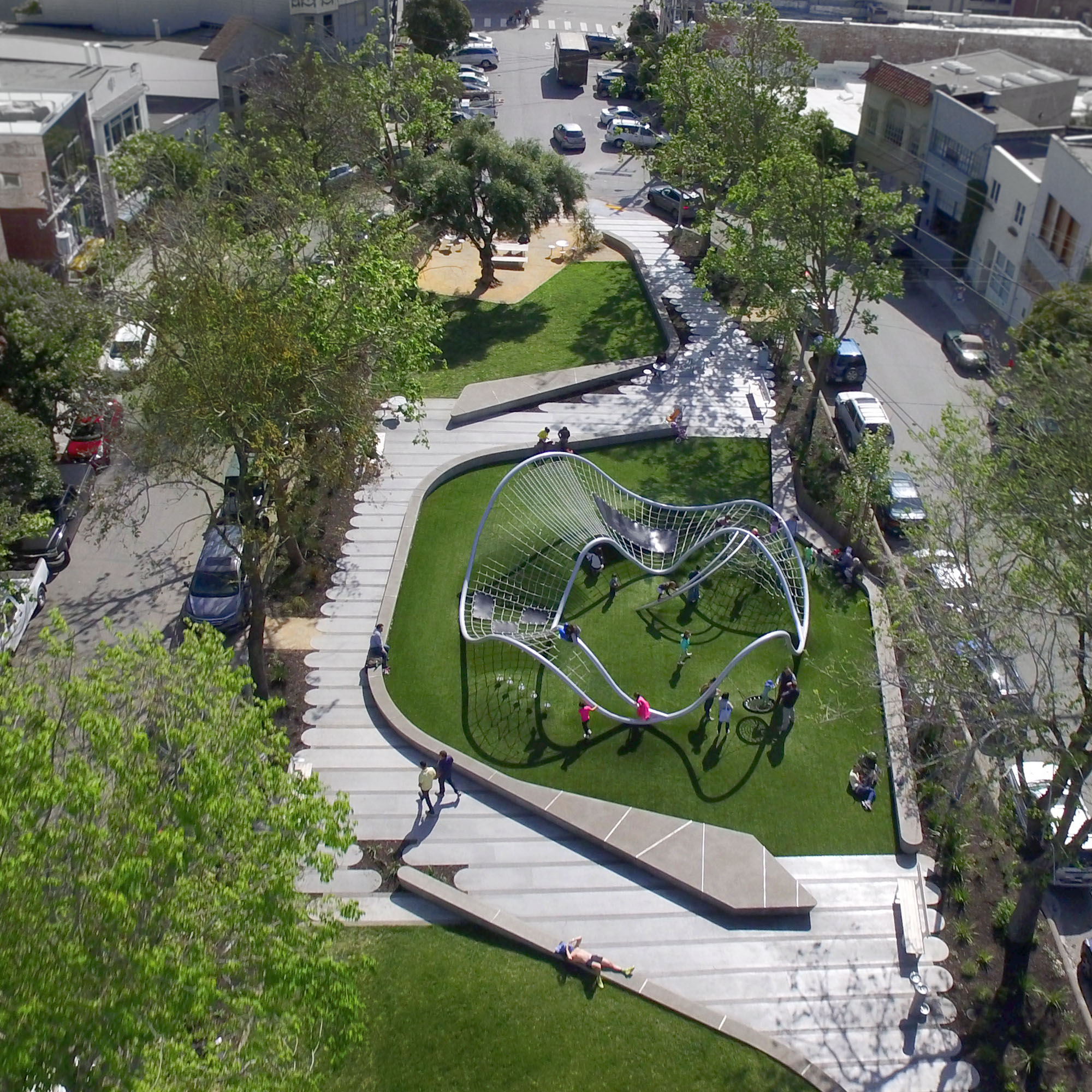 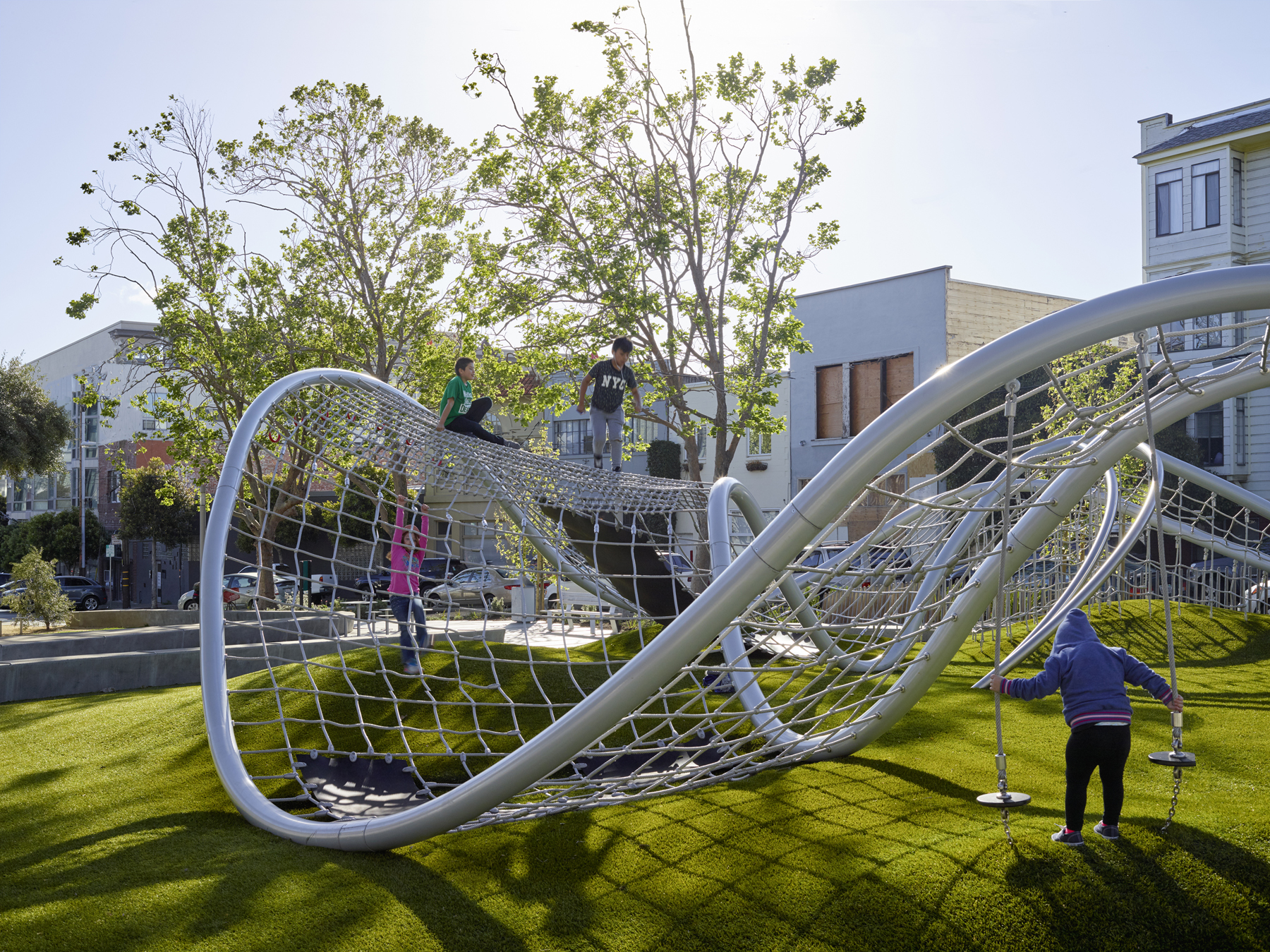 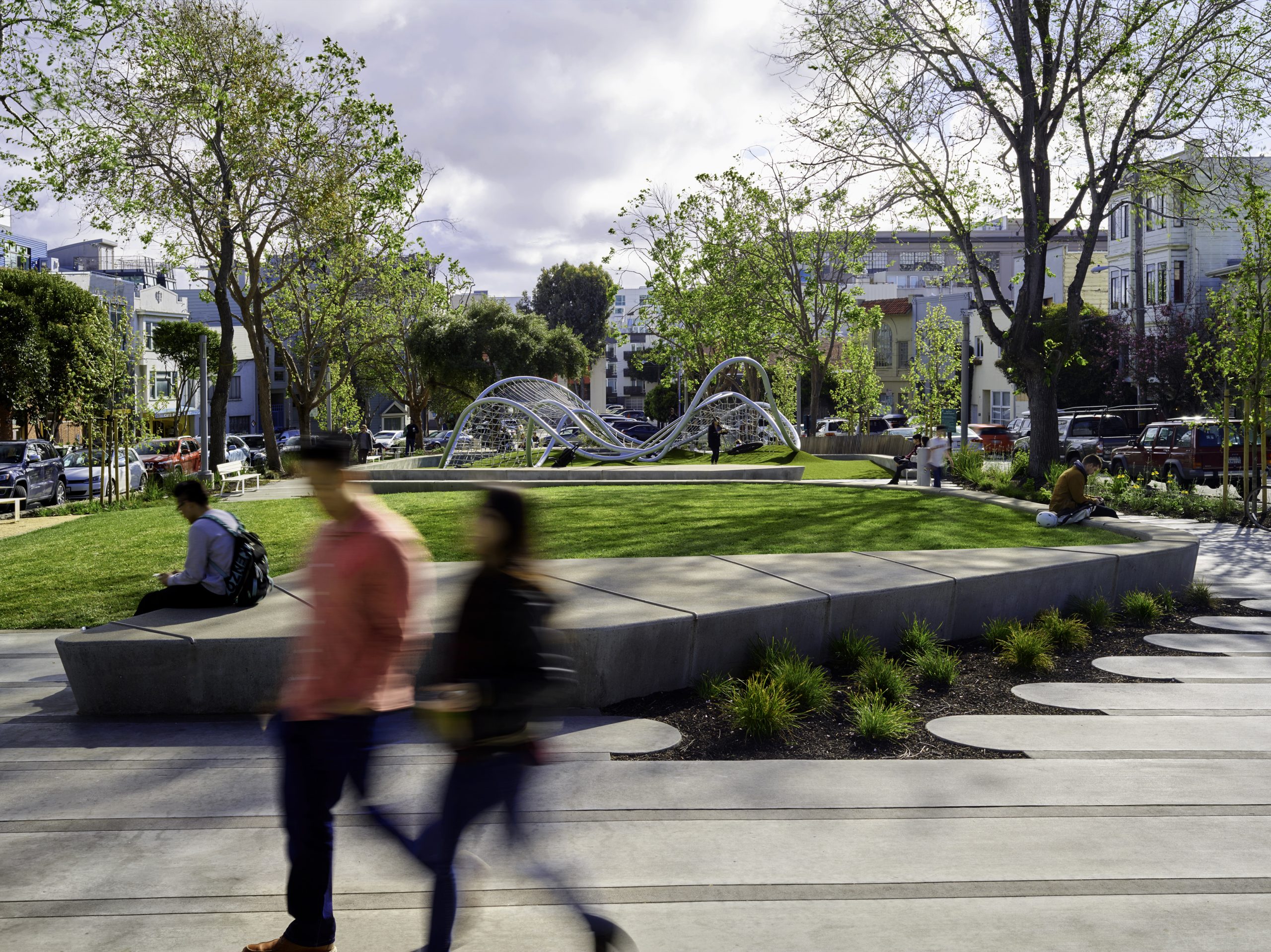 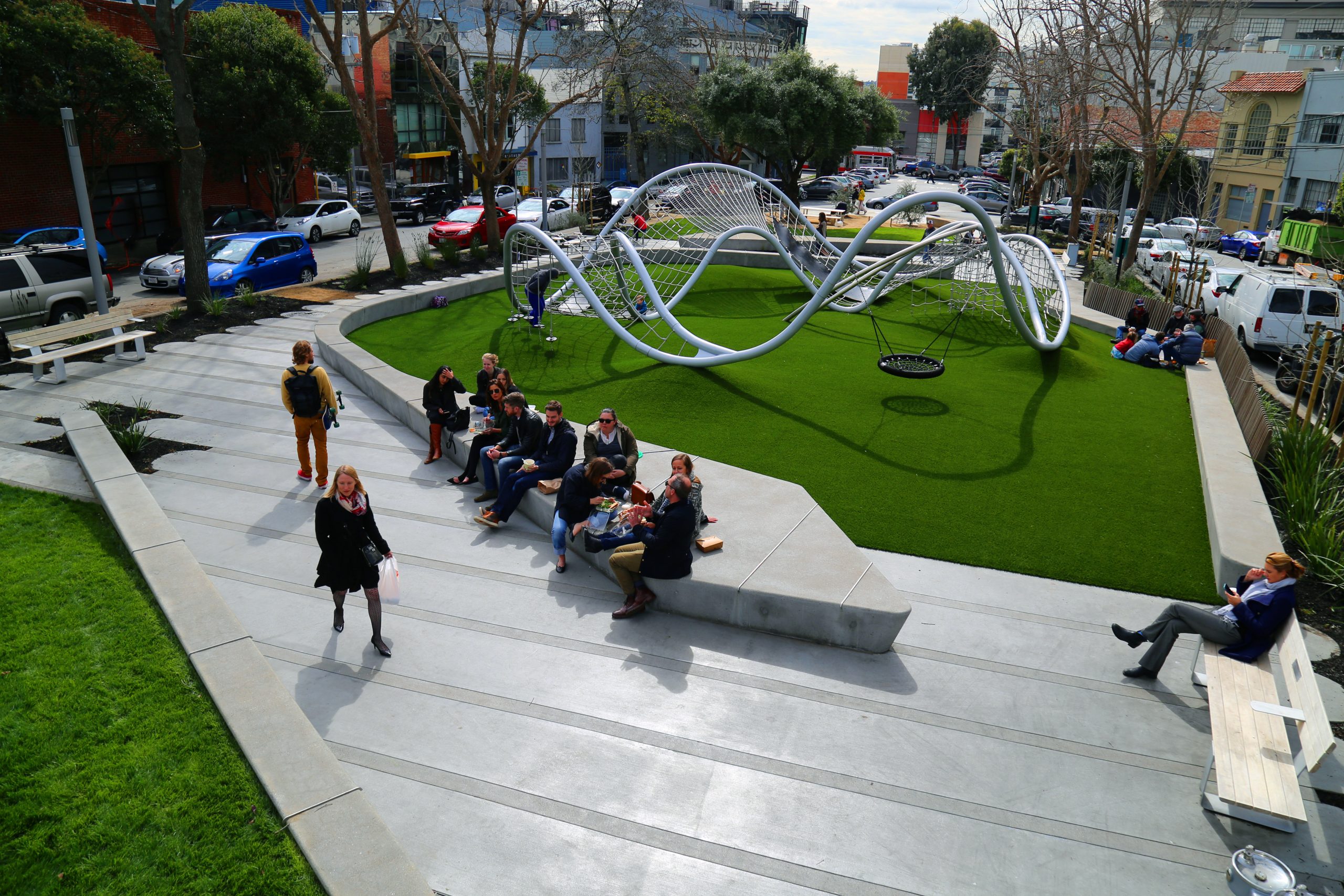 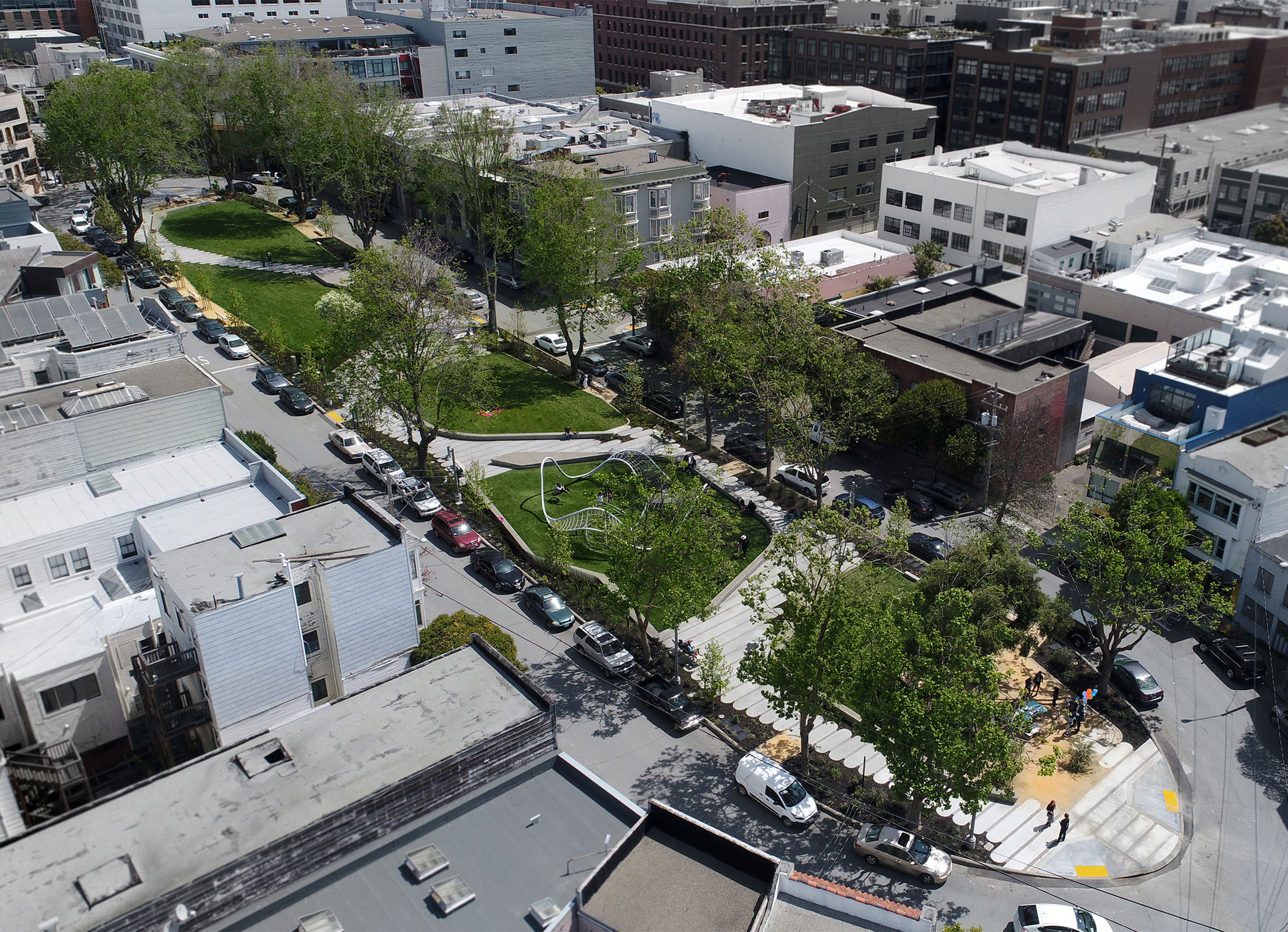 South Park is the oldest park in San Francisco. Over 162 years of evolution across its 1.2 acres, South Park has served the needs of diverse populations, including immigrants, refugees, designers, artists, and young professionals. The park redesign builds on this history, while solving the site’s infrastructural issues and making the park accessible to all. Using a single, meandering pathway to link public plazas, informal stages, bioretention gardens, gently sloping meadows, and a custom play structure with the surrounding neighborhood, the park ties together disparate functions and creates a space that offers diversity of use.

We conceived of the various elements of the project as a tightly bound material system with four key components: an expandable, modular paving system; large sloping meadows; vegetated infiltration basins; and low retaining walls that mediate between paving and planting areas. A central component of this system is a ‘universal’ play area. The custom play structure form came from the simple goal of connecting two circles inspired by the beautiful fluidity of Nudibranch, a sea mollusk. Rounded berms rise from the play surface, to meet the structure as it dips down towards the groundplane. The mounds have multiple functions, providing informal play space while providing points of access to play elements and framing an accessible area along the edge of the structure. Parametric software was again used to generate a responsive model for the custom play structure, this model allowed us to quickly generate multiple versions of the structure. It also would automatically distribute netting, fittings, and play elements, responding to the manipulation of the perimeter and interior tube forms.

After a thorough assessment of the project’s history and anticipated future needs we began by meeting with community members and organizations to better understand current concerns and future demands. We then underwent an analog diagramming and site analysis process before replicating and expanding those modes through parametric software. This allowed live modeling of different scenarios and design iterations as we continued to accumulate site data through direct observations. As we continued to work with the community and its organizations we were able to quickly respond to concerns and new ideas by linking analog and digital methods.

Drought tolerant plantings, bioinfiltration, and an irrigation system using collected rainwater combine to create an ecologically sustainable design. However, the park is also socially sustainable, meeting the needs of a diverse population, providing accessible play-space for all ages, and offering diverse spaces for public use. A lack of fences opens the park to all, while short concrete seat and retaining walls offer informal seating and stages for the theater of daily life. South Park succeeds as an ecologically and socially sustainable park, setting the stage for use, connection, and delight while creating a space that is both magnetic and evolving.