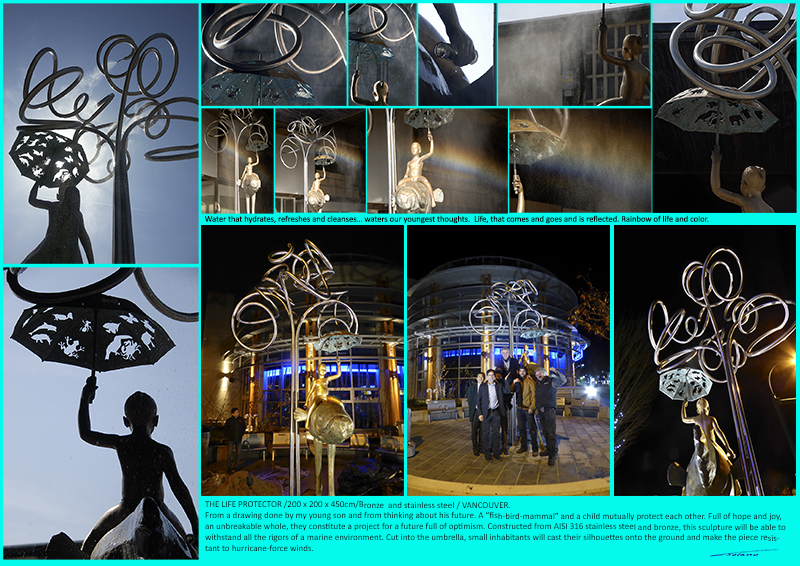 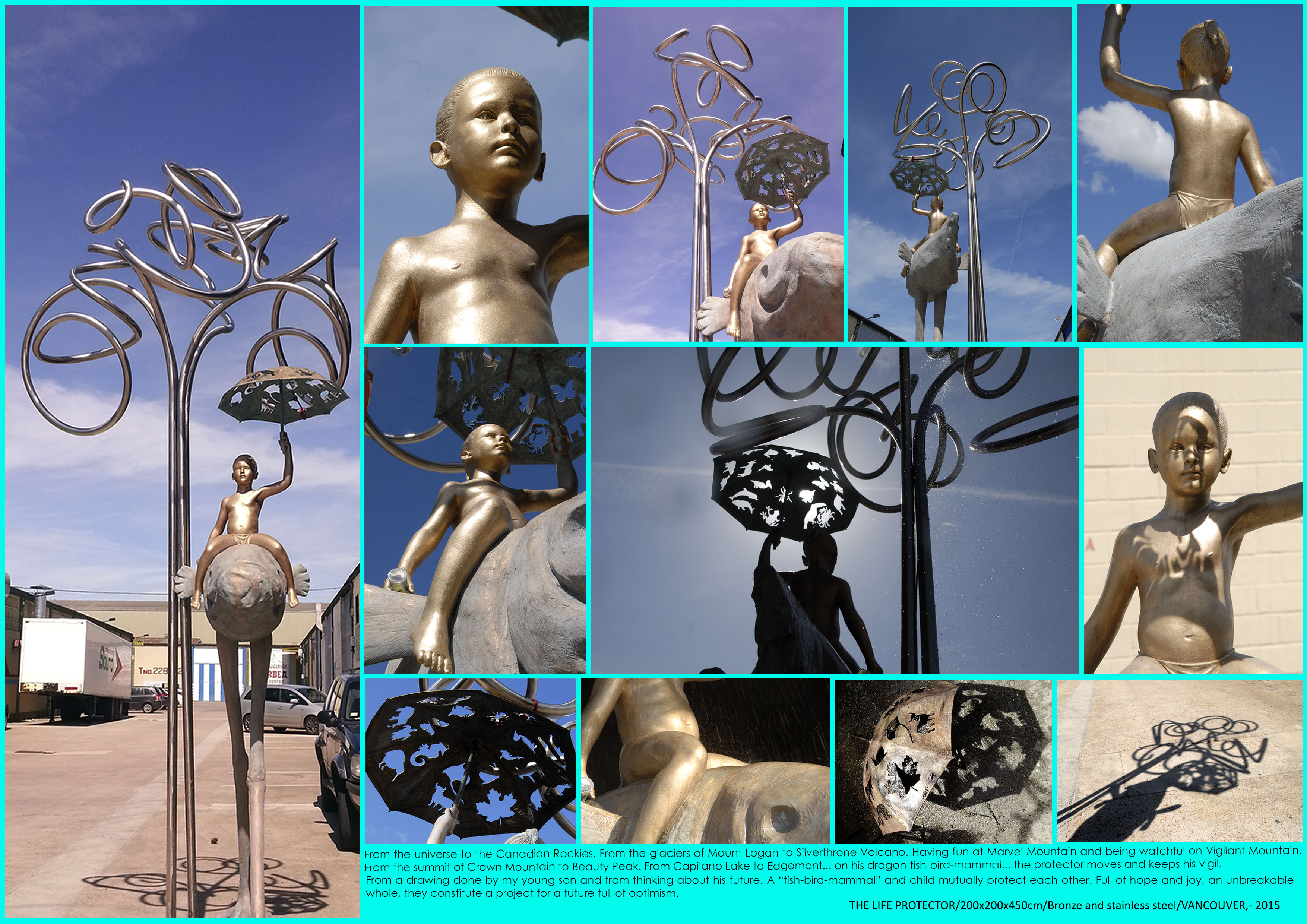 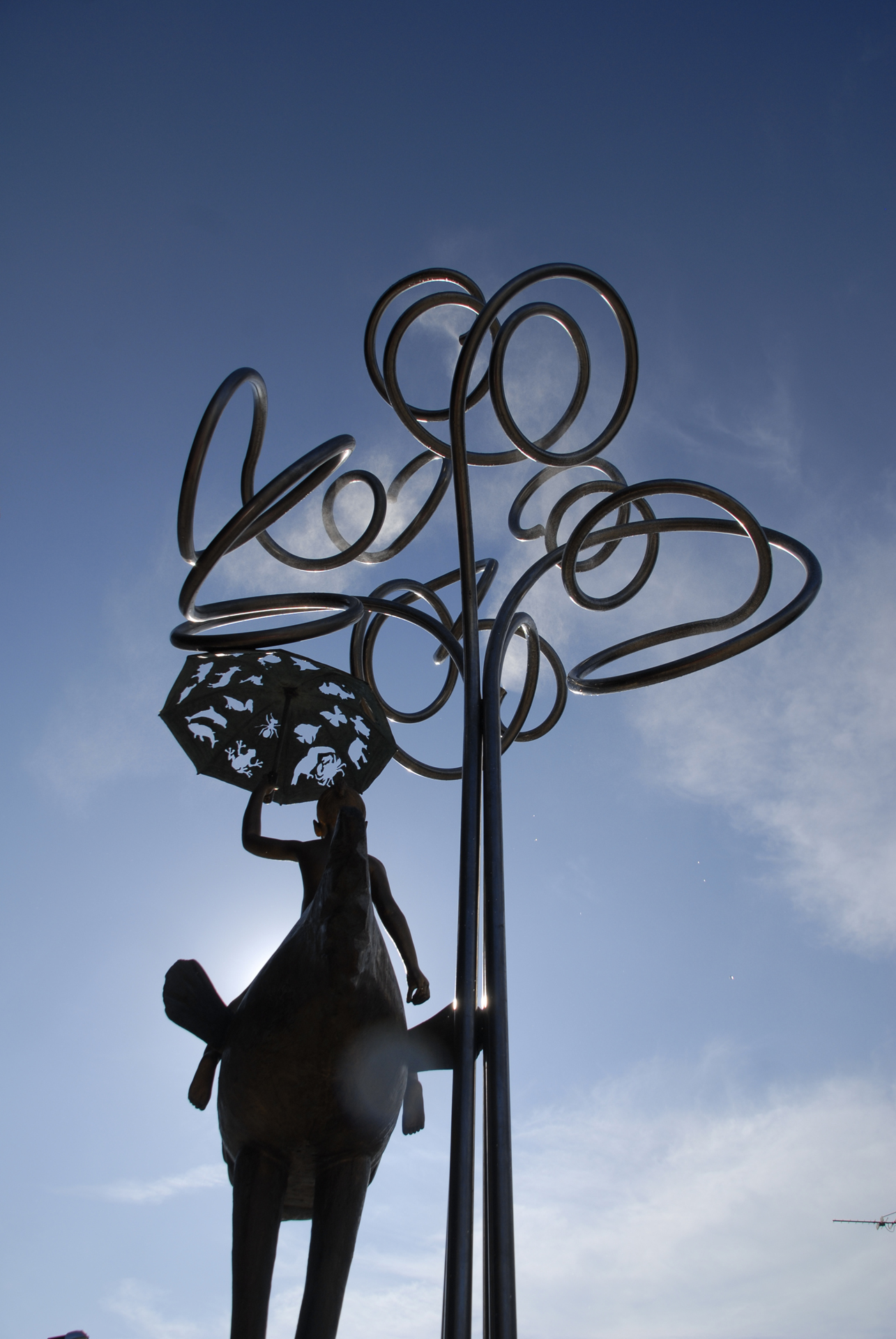 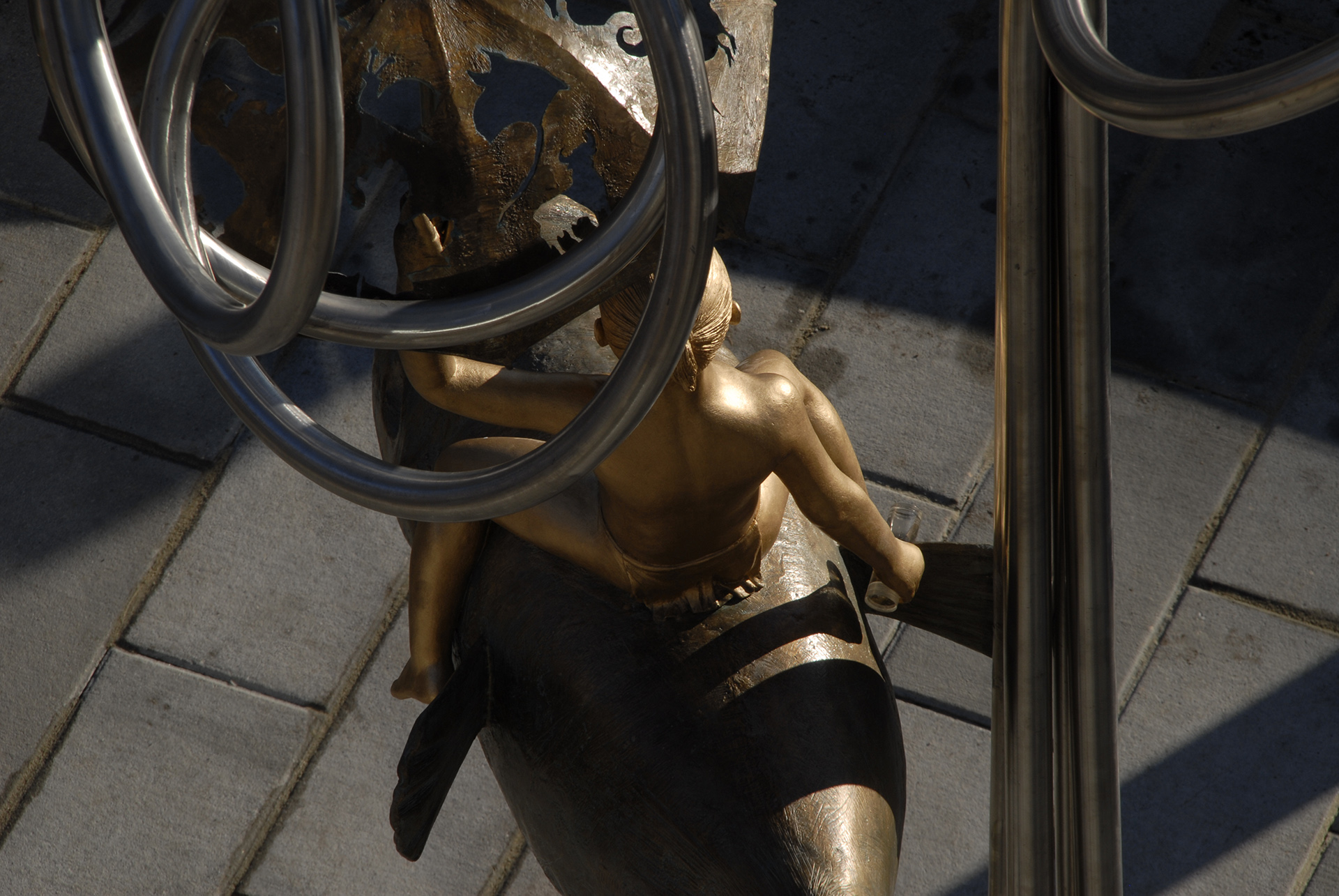 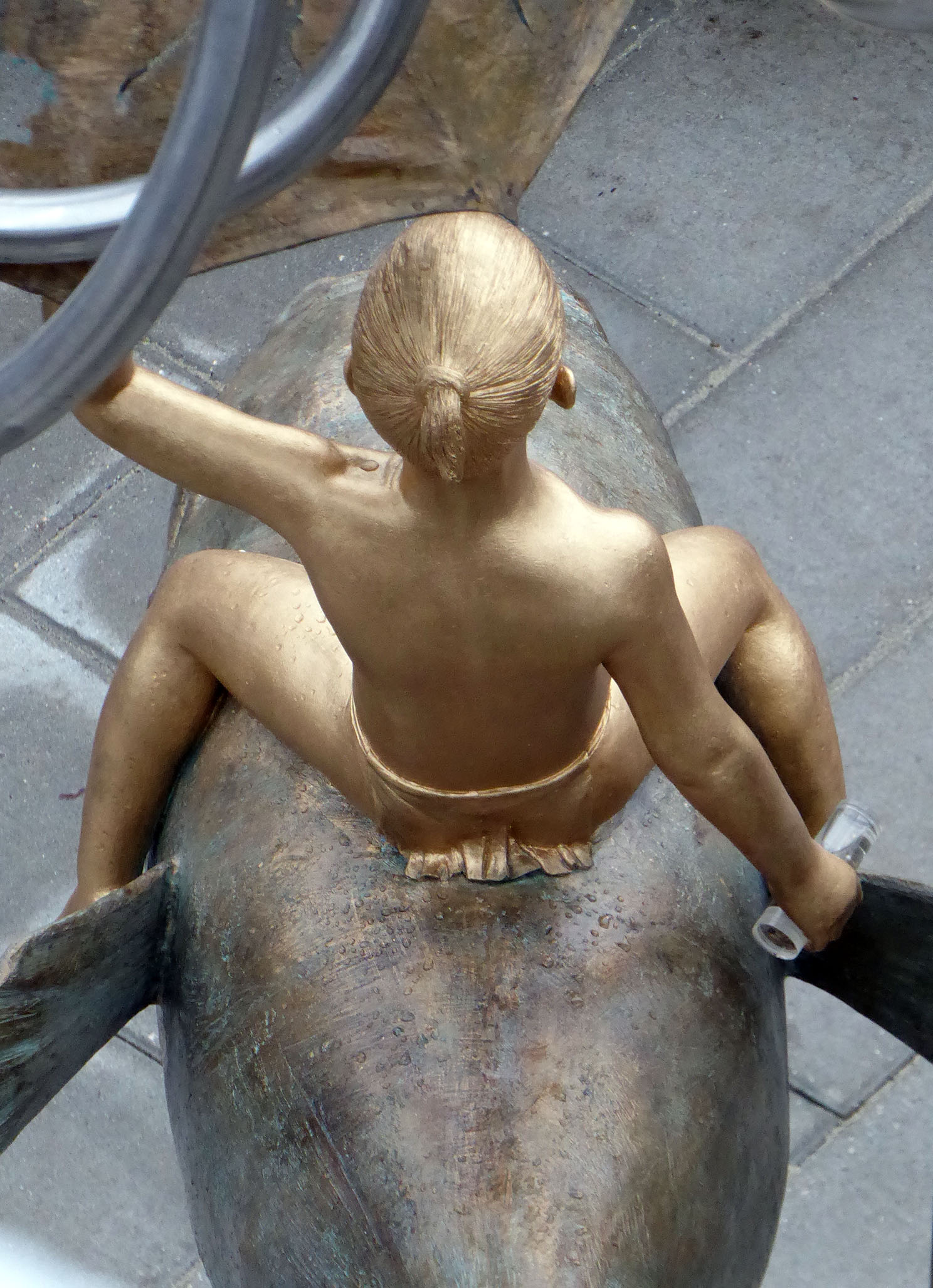 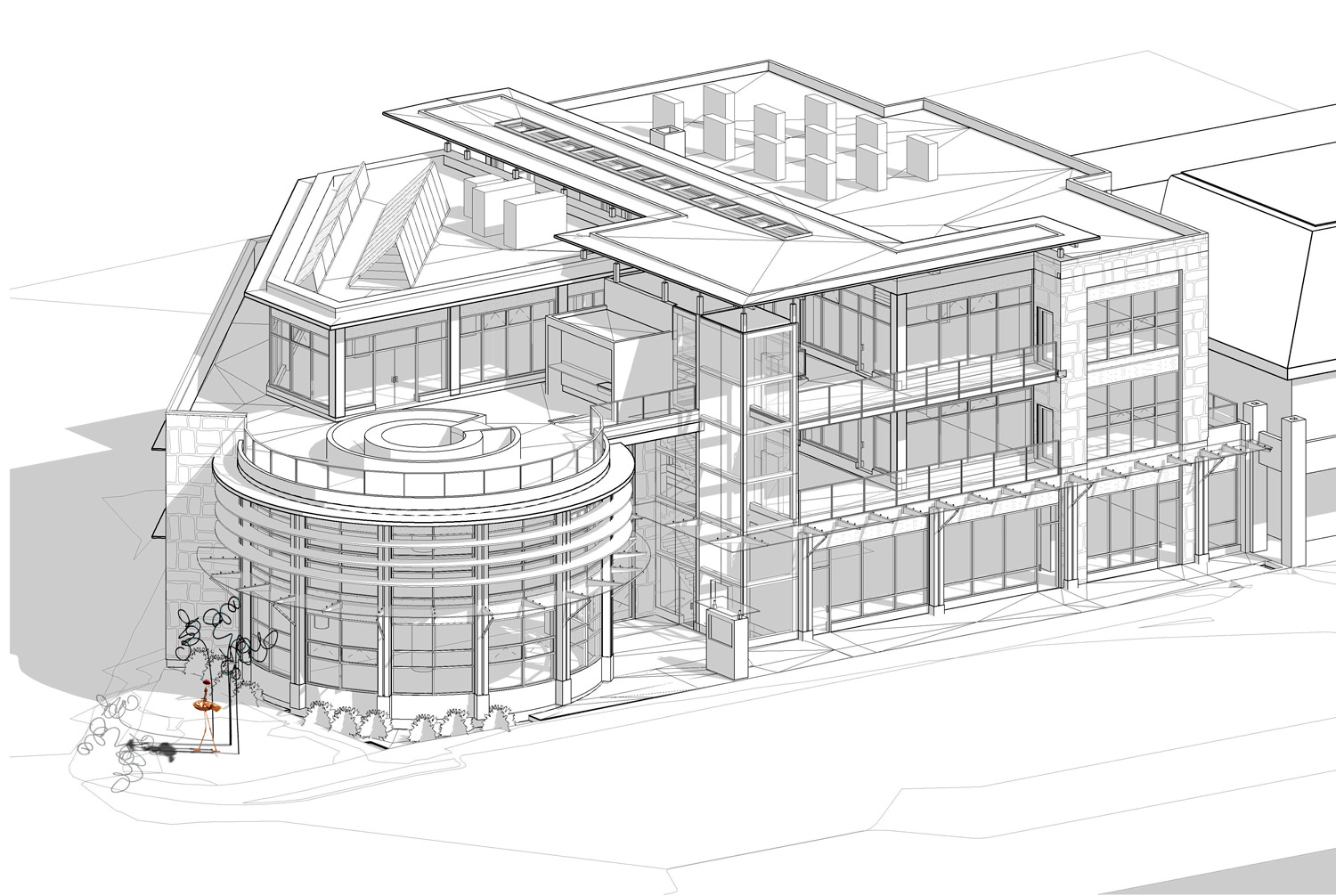 THE LIFE PROTECTOR / 450 x 200 x 200cm / Bronze, stainless steel, water mist, LEDs / Edgemont Boulevard, Vancouver, BC. This brief was for a permanent artwork to stand as a figurehead at the prow of the new Edgemont Commons building on the corner of North Vancouver's arterial Edgemont Boulevard.

The piece stands within a green, garden-plaza, open to the public and clearly visible to passing motorists. It was required that the piece fit closely with the marine-inspired architecture of the Edgemont Commons building, and that it connect directly to the both city's history and reality, and the incredible natural surroundings in the state of British Columbia. Accordingly, we undertook extremely thorough research into the city of Vancouver and the state of British Columbia. We also discussed the project in detail and at length with its commissioners at Kevington Building. Our primary source of inspiration came from the incredible natural diversity and majesty of the state of British Columbia, combined with the responsibility, care and attention with which urban development is managed in Vancouver. We settled on the idea of a symbiosis of human urbanity and nature where each is vital for the other's survival. The basis of form came from a picture drawn by the artist's son during his infancy, rediscovered years later; something that in its hope and innocence seemed perfect for this project.

From the initial conceptualization of the EdgemontCommons Project it has been the goal of both the District planning team and Kevington to create an iconic gateway building into the coveted community of Edgemont Village that meaningfully enhances both the built and natural environment. In receiving this year's Design Excellence Award, we are truly grateful and honored to receive the endorsement of the Design Panel and the District. This project's success is attributed to a confluence of many innovative and big ideas so we would like to thank the design consultants including the Architectural team at GBL; Tom Bell, Joey Stevens, Diran Hirozian and Sergio Rojas, Jonathan Losee, Landscape Architect, Casto Solano, Public Art and all of the consultants and trades that assisted in making Edgemont Commons a special building. Everyone who worked with Casto enjoyed a very positive experience. Casto is both creative but technically very adept. His imagination is limitless yet his designs are very pragmatic. We were very, very impressed with the quality of the work and the quality of the individual and would highly recommend him as a talented and capable public artist. Kevington Building Corporation (Developer), Joe Khalifa.