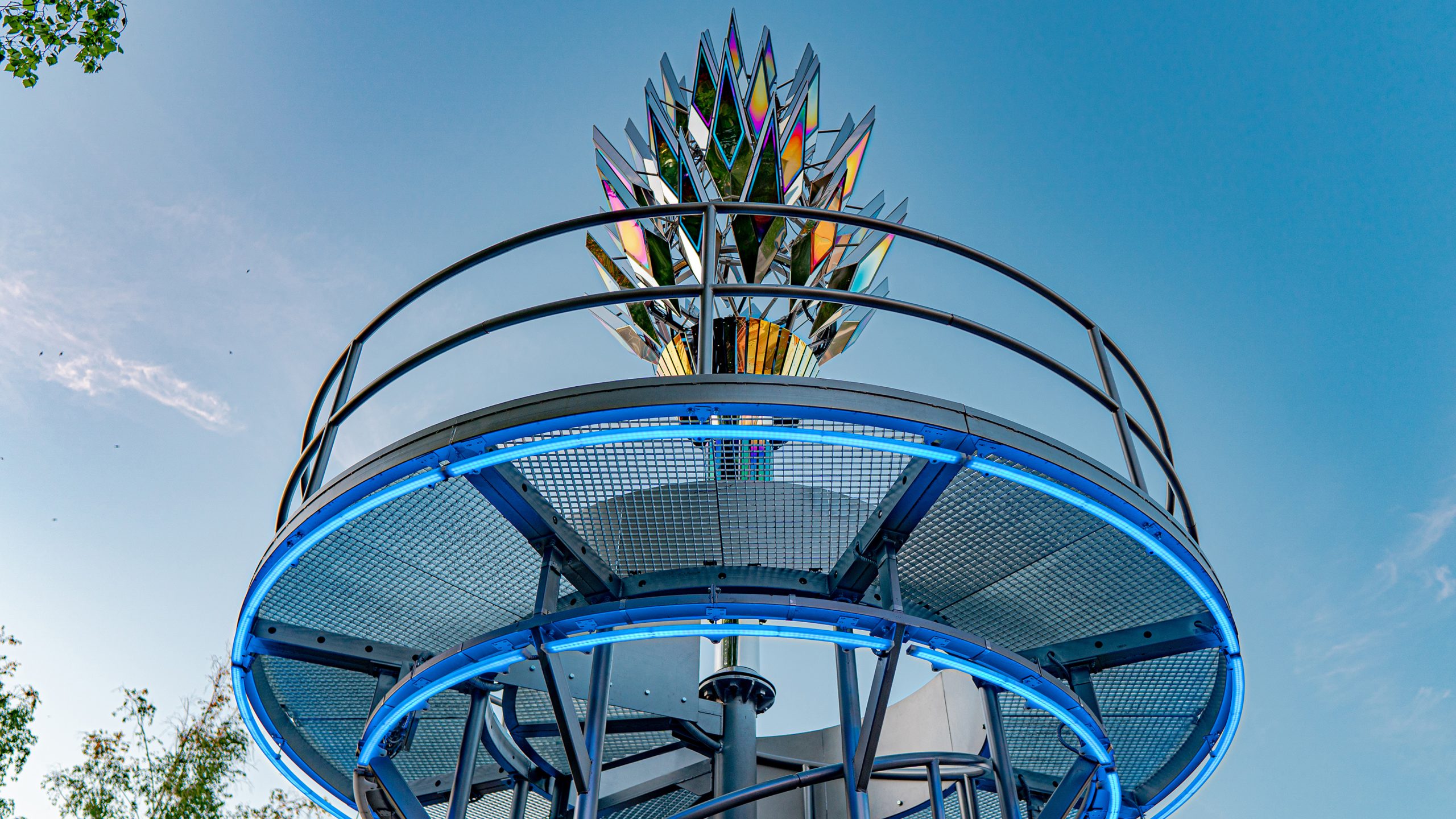 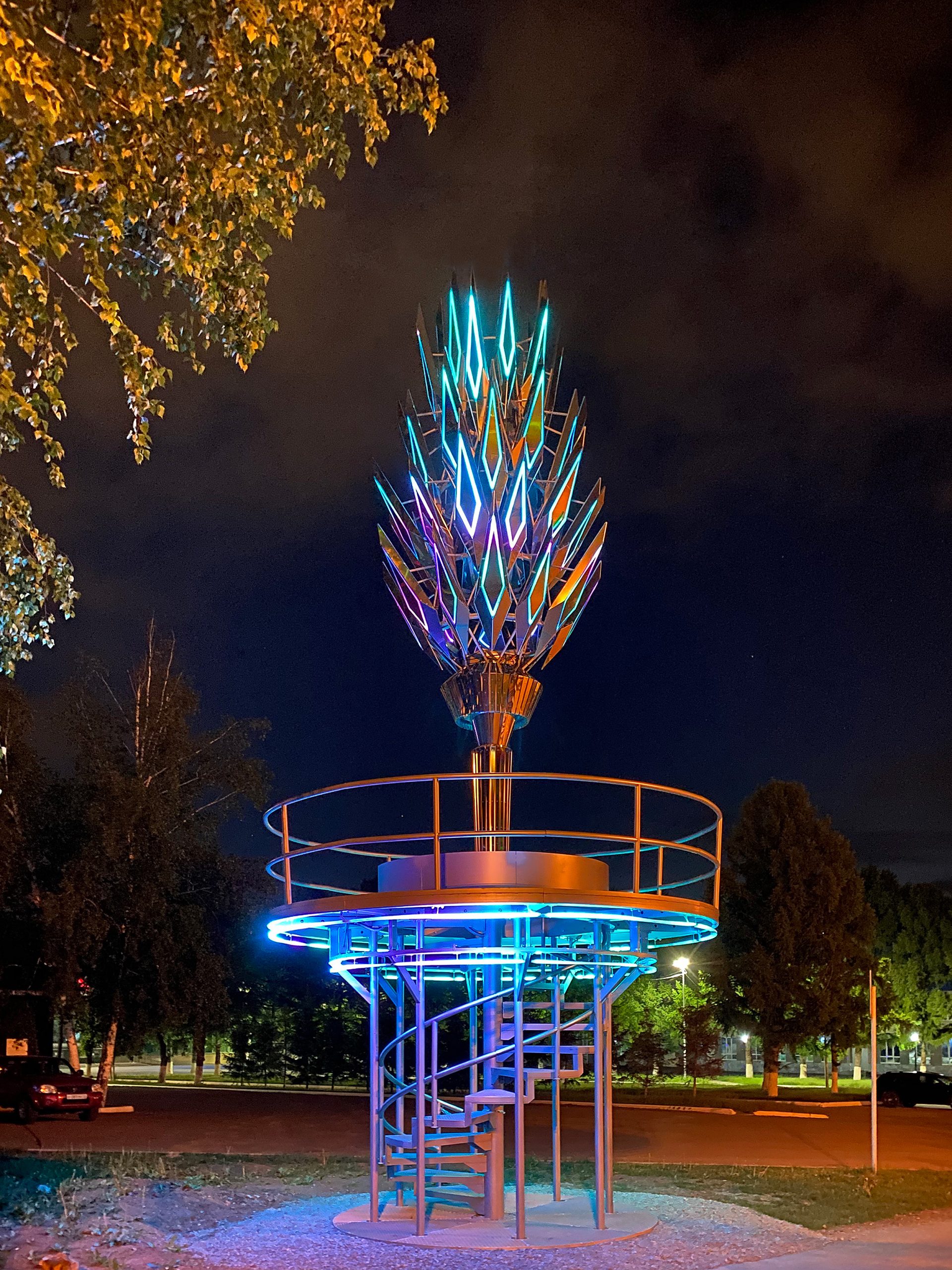 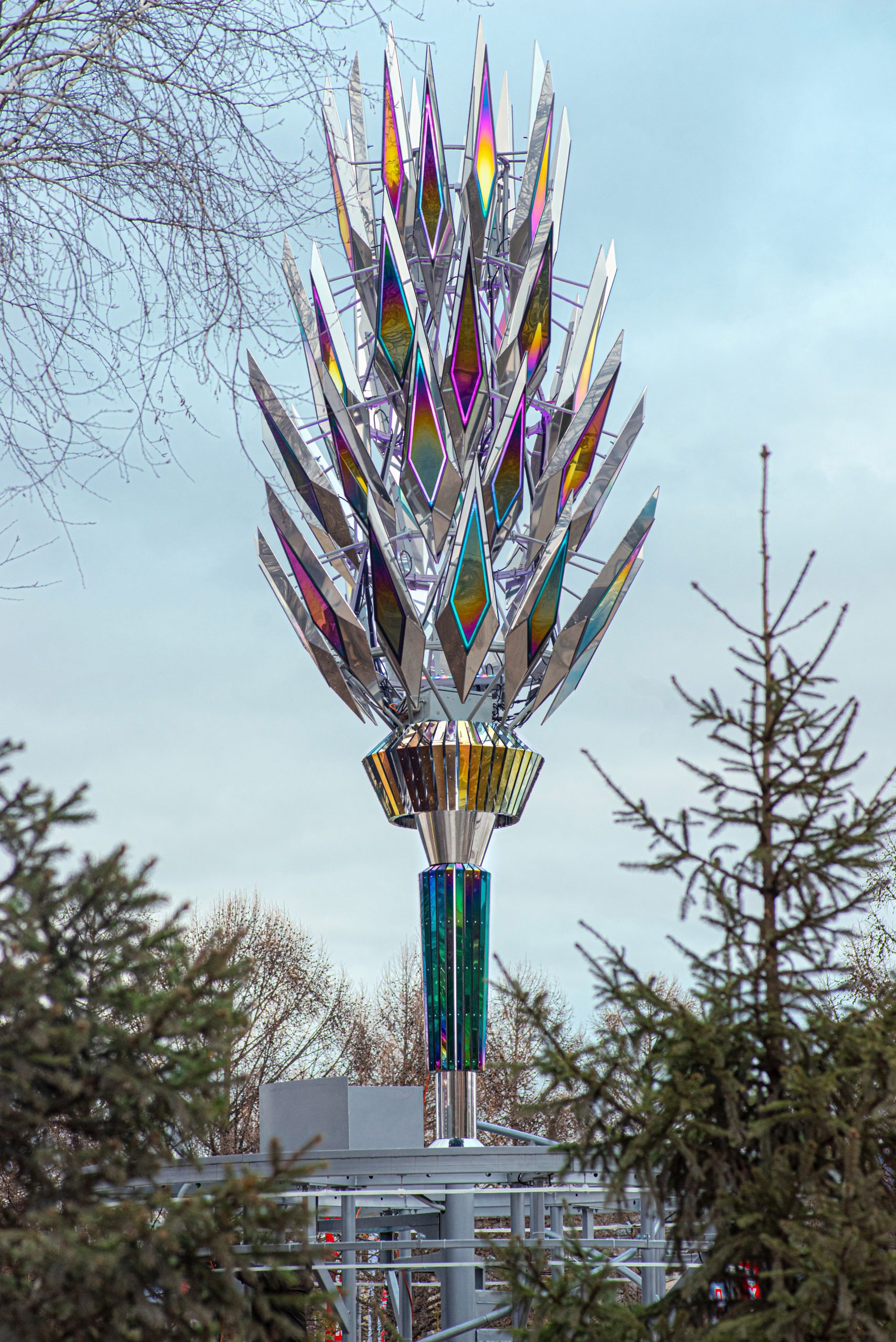 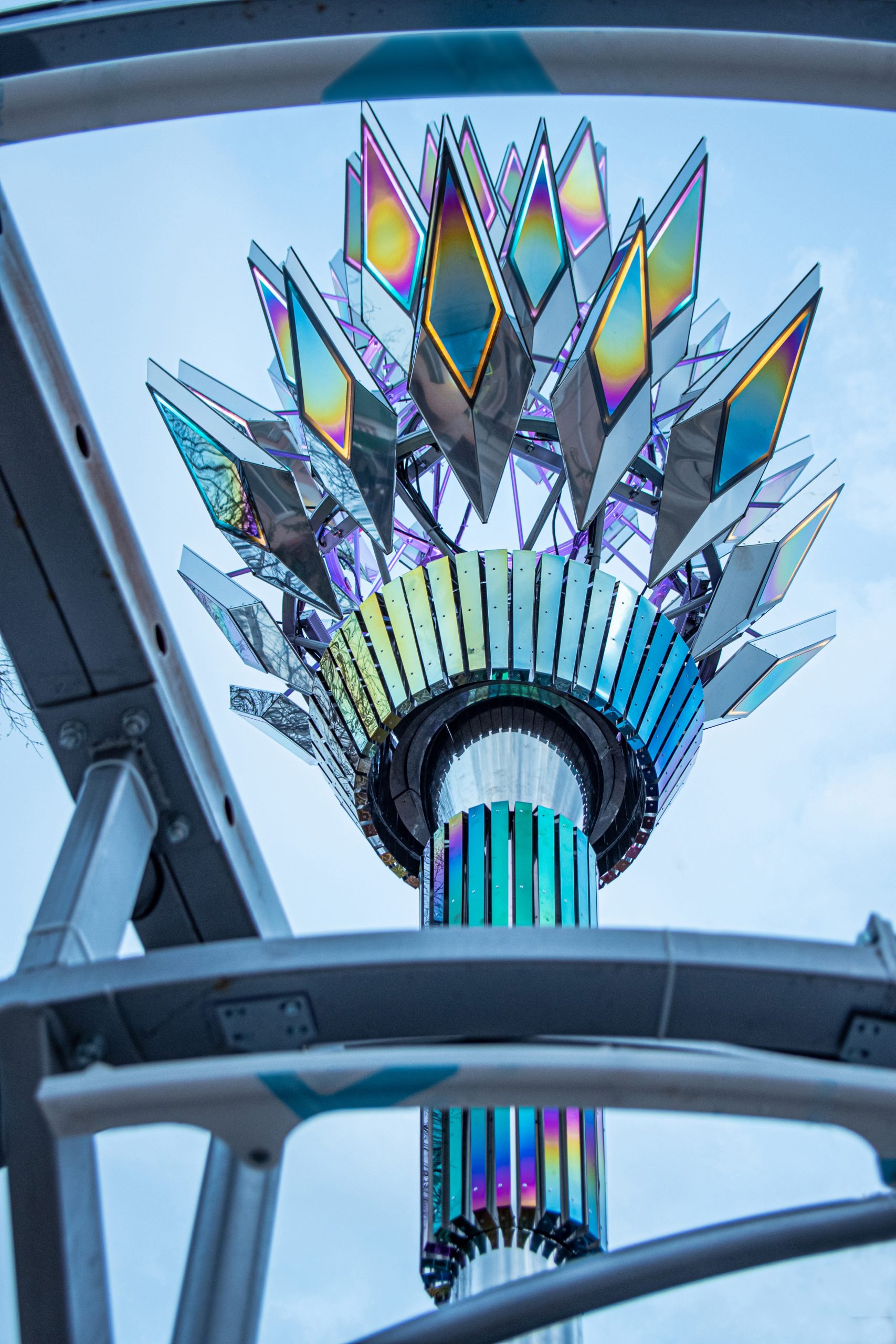 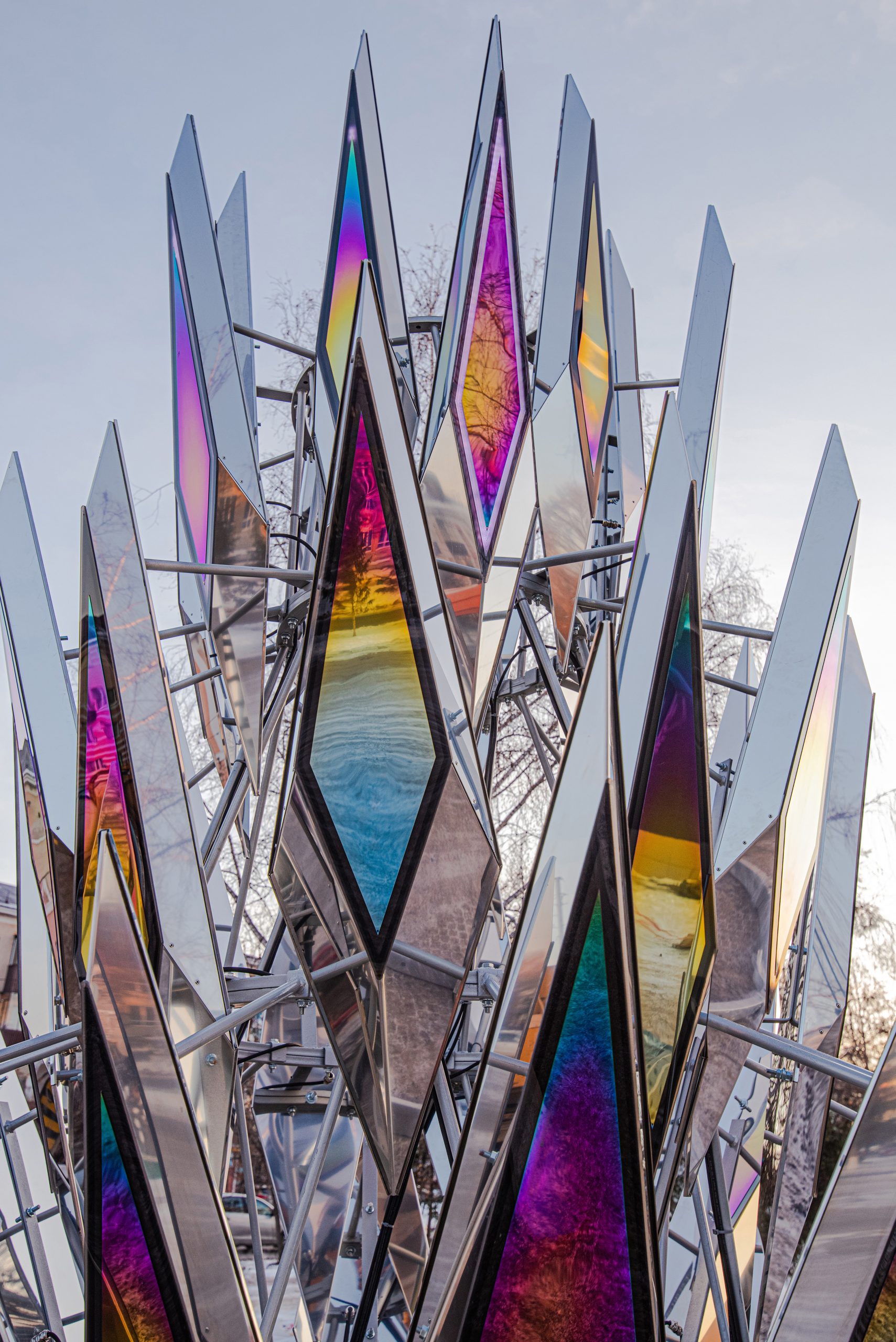 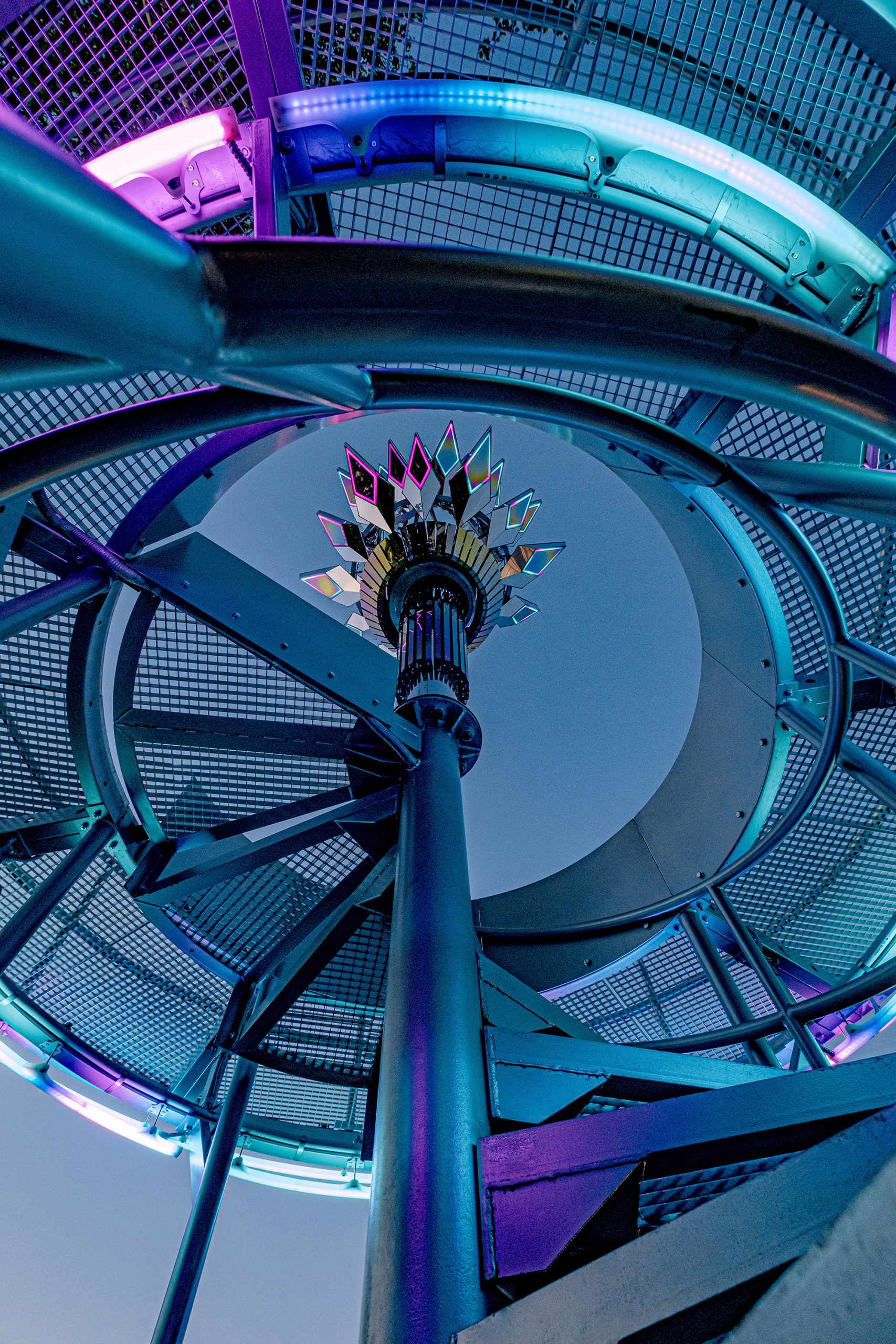 Many volumetric mirror modules made of polished stainless steel with integrated LED illumination, forming the main “body” of the sculpture, allow the object to effectively interact with the environment both in daylight and in the dark. The viewing platform of the public art facility is also equipped with ring light elements. The light elements of the observation deck and the sculpture are combined into a single light-dynamic system that converts solar activity data into light patterns. A special algorithm analyses the numerous data coming from the Sun and forming the so-called cosmic weather: solar “wind” (star radiation in various ranges), the number and size of sunspots, coronal mass ejections and other information. One of the parameters of solar activity, transforming into light patterns, is the presence and characteristics of the so-called solar faculae.

The total height of the public-art object is 9.5 meters. The height of the observation deck is 3 meters.
Materials: mirror steel, gradient-coated steel, LED elements, computer control.

Light Art Installation «Solar Faculae» was mounted in the city of Almetyevsk, Republic of Tatarstan, Russia as part of the “Tales of the Golden Apples” Public Art Program - a project of the Institute of Research on Street Art and Tatneft company.

On the one hand, the sculpture is a representation of the gas flare. The public art object is installed in the oil-producing region, whose residents are sensitive to their history and the industry in which they are engaged. According to local collective memory, gas flares served as illuminated navigation for citizens of Almetyevsk to find their way home in soviet times, when industry was set. Gas flares were probably the only lightning devices in a newborn monocity founded after World War II. Residents remember, that in the 1950's in the evening and at night there was so much light, that they were not afraid to go to the club, or to the dance unaccompanied. Today, gas flares are being gradually withdrawn from use, but the romantic image will remain in the city in a different way.

The appearance of the sculpture refers to the architecture of Soviet modernism, which seems to be a somewhat underestimated architectural style, taken in a separate direction only at the beginning of the 21st century.