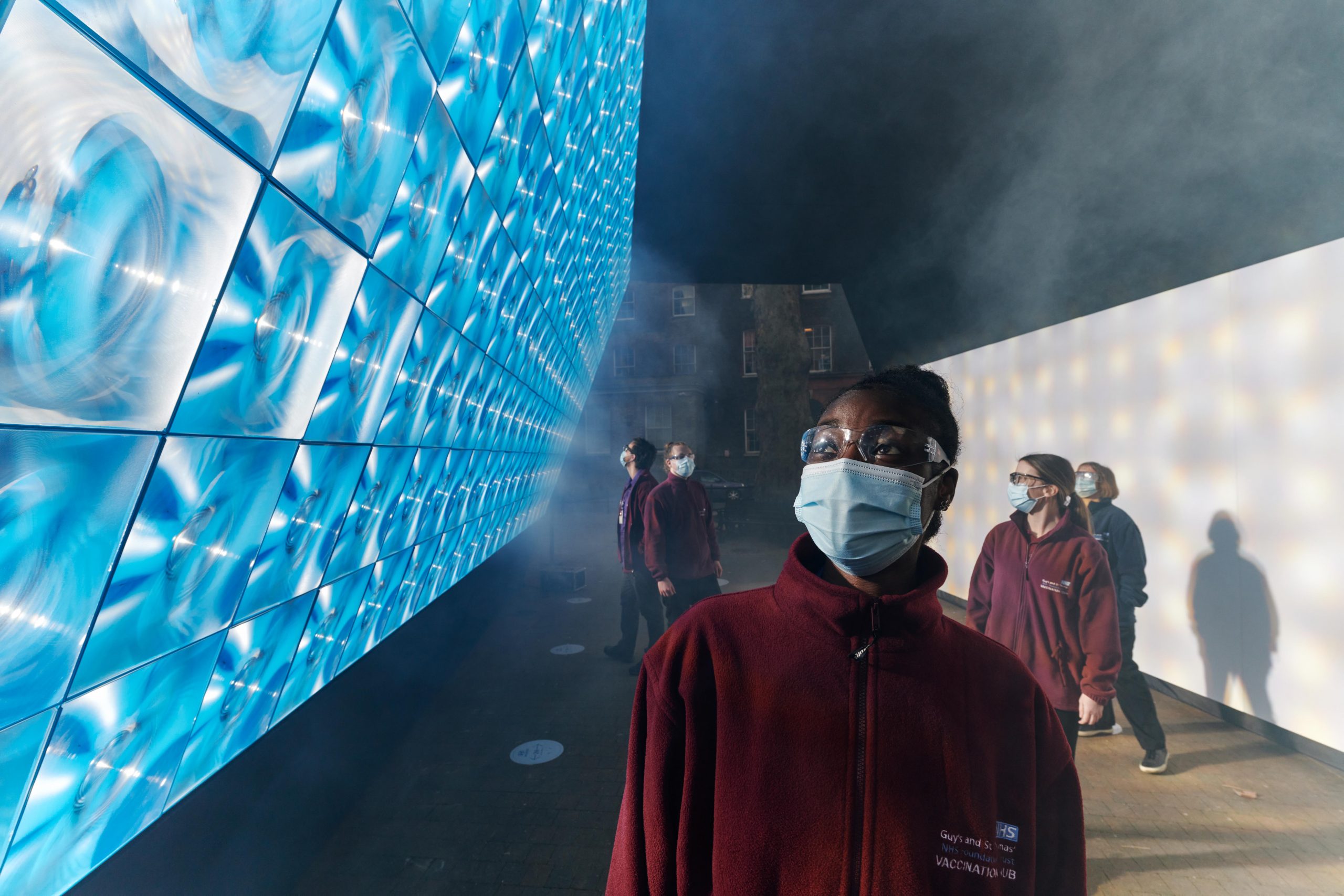 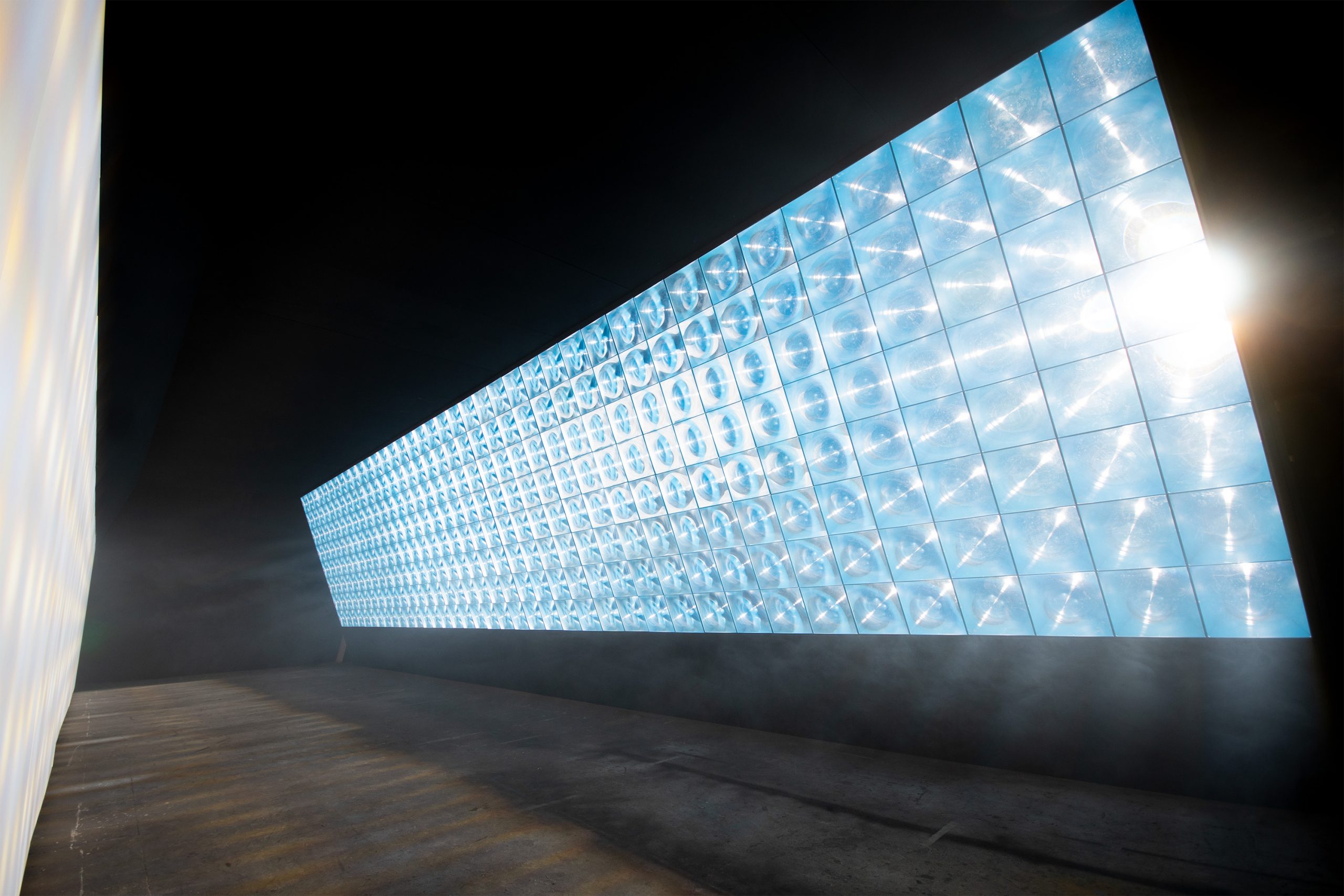 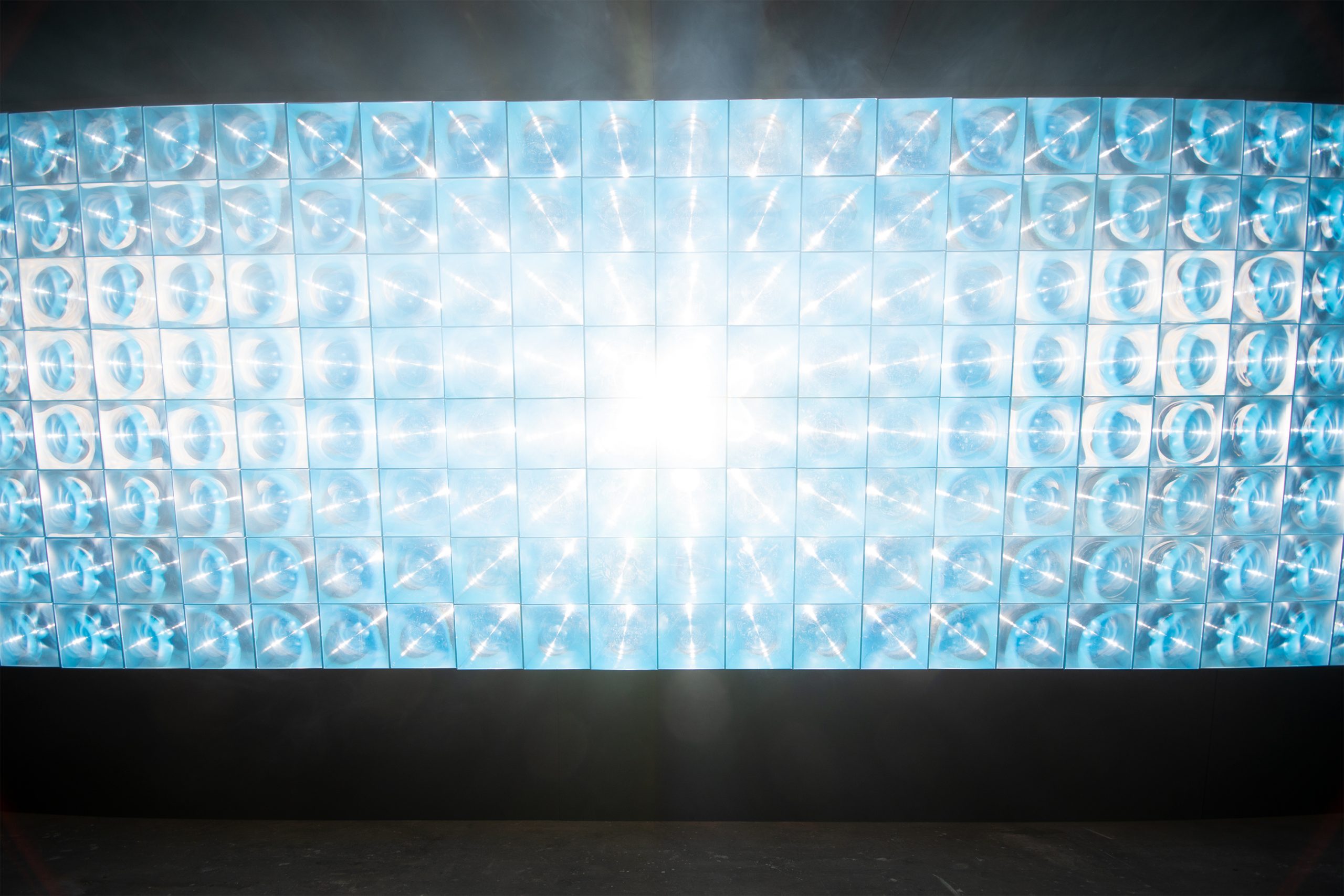 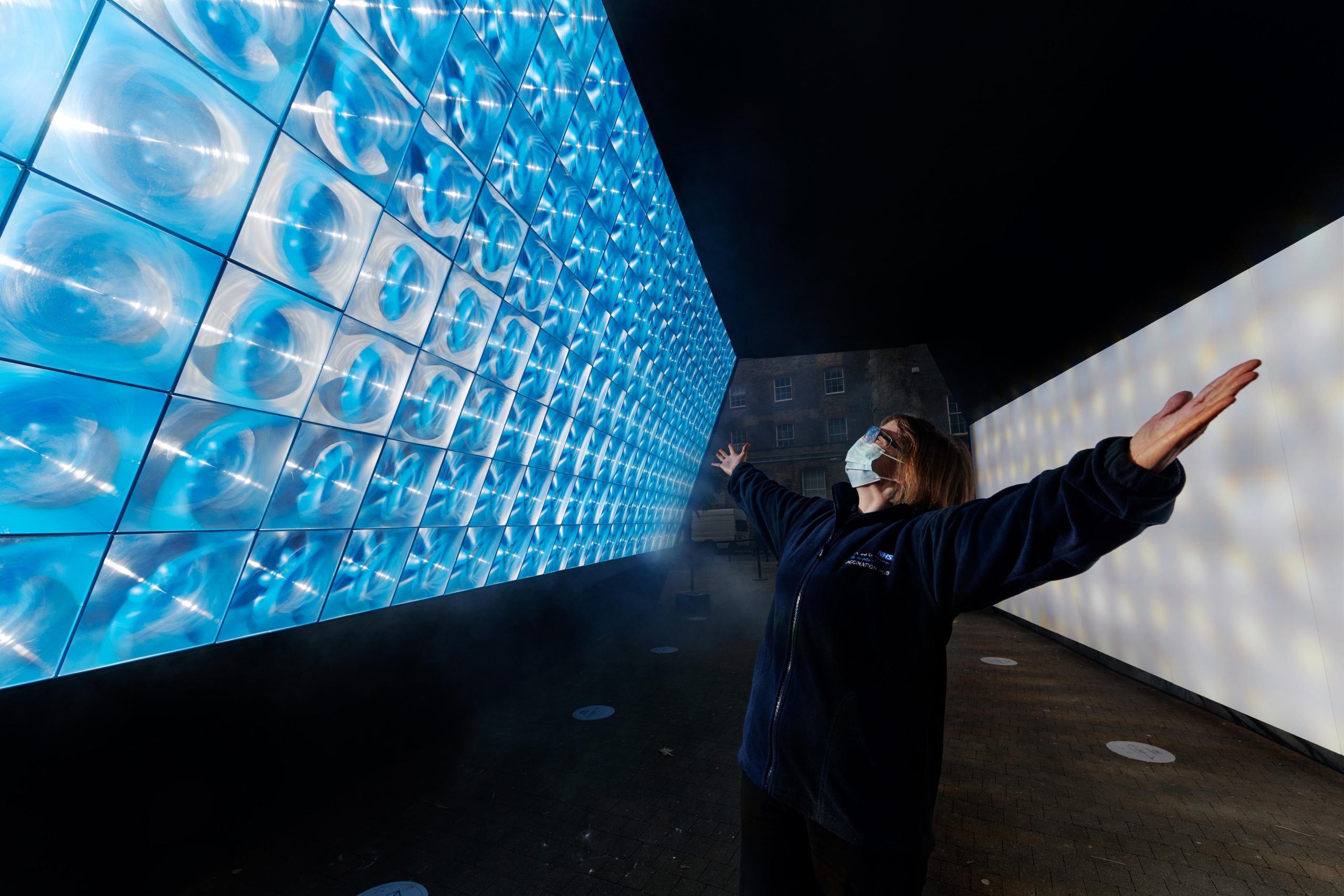 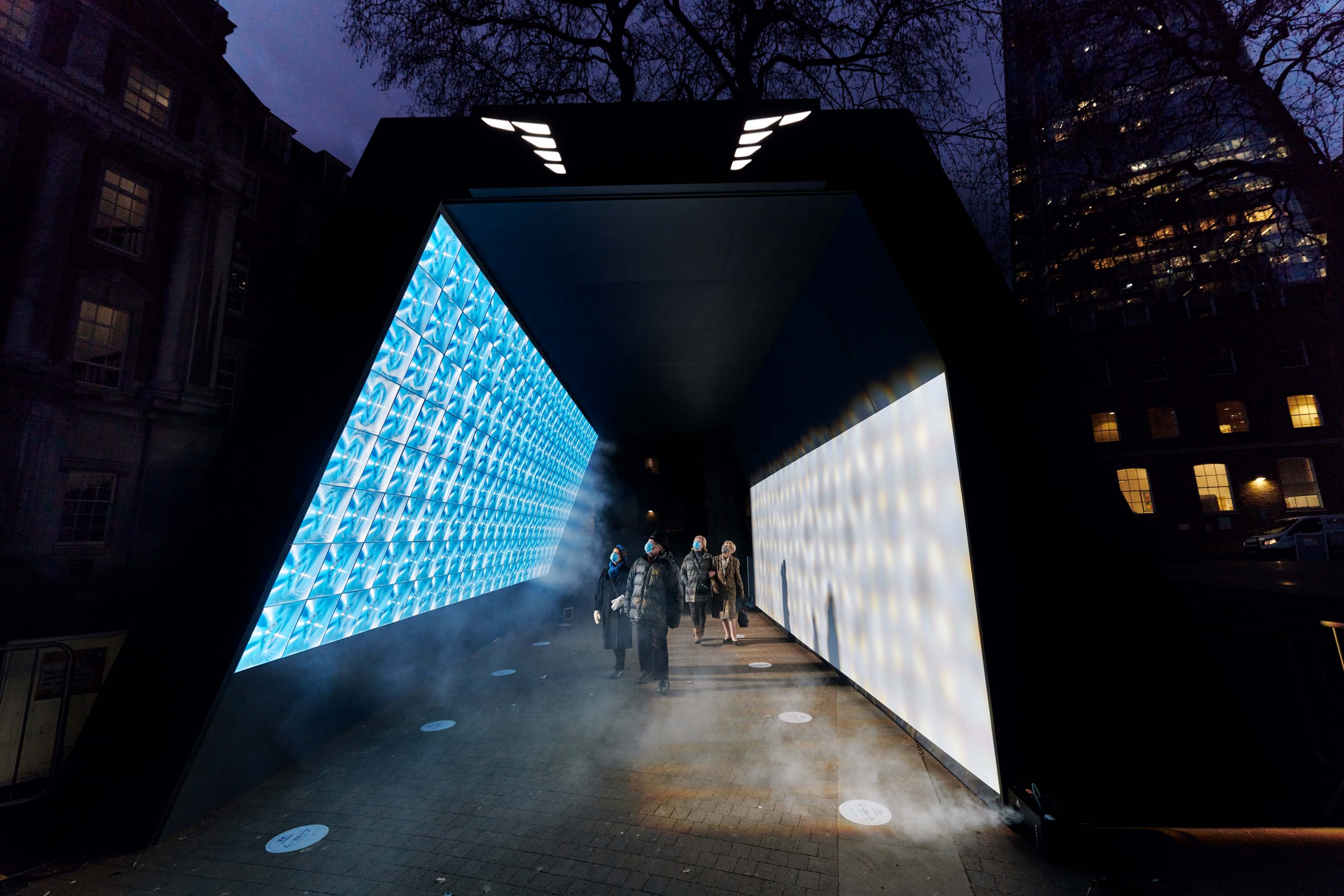 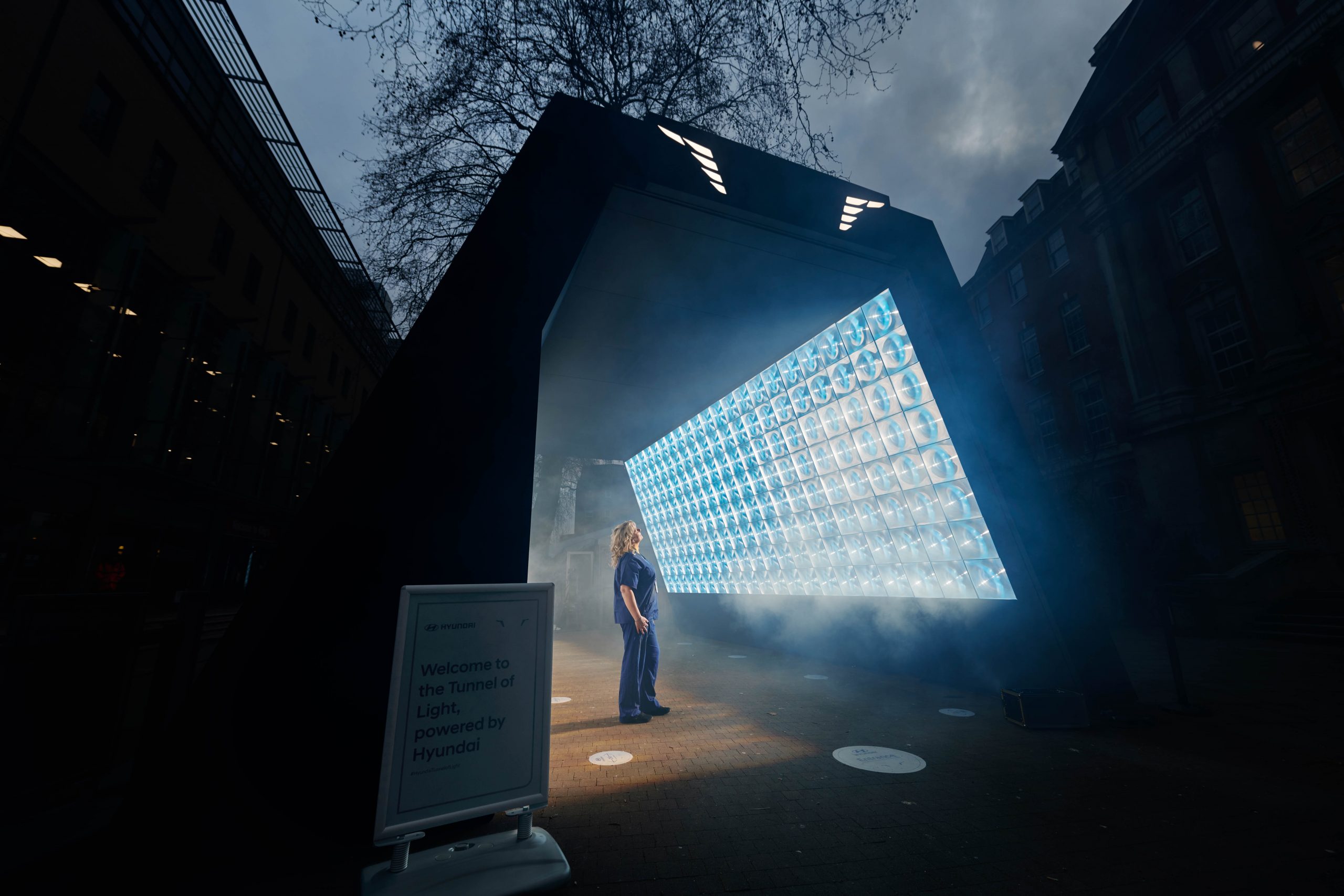 Created to lift the spirits of health workers in the time of COVID, SOLA was first shown outside Guy’s Hospital in London during the later stages of the pandemic. It was a gift to the UK’s National Health Service staff and visitors: a place for quiet contemplation, enveloping visitors in a wall of sunshine to lighten the long winter and the dark times we were all in.

The project consists of a vast array of over 300 collimated light sources, we call them ‘sky pixels’. Each one consists of a fresnel lens and a super-bright white LED within a self-contained box. The lens ‘collimates’ the light, making it travel as a parallel beam. The light emitted from LED closely mimics the visible wavelengths of sunlight. When placed together they create a very strong 3D perspectival effect: the massive wall of parallel light appears to emanate from an illusory sun, millions of miles away.

This was always going to be a temporary installation, a ‘pop-up’ within hospital grounds for hospital staff.

The primary aim was to create an uplifting experience for UK Health Workers. Like Healthcare around the world, the UK's National Health Service (NHS) was under a lot of pressure and so the project’s aim was to try to improve life a bit for hard-pressed doctors, nurses and other support staff.

The second Covid wave hit London in November, at the beginning of a long, dark winter, and so the idea to contrast the bleakness with a space where people can bathe in sunlight seemed very appealing.

By the time SOLA was installed highly vulnerable members of the public were being given priority access to the vaccine so, as the piece was installed next to a major vaccination centre, those getting vaccinated could also experience the work.

The idea of a tunnel of sunlight dovetailed with one of several experimental lockdown projects we had been working on – the idea sought to use LEDs and lenses to create a convincing window to a distant artificial sun.

The development process took place at Squidsoup’s studios in the rural Cotswolds (UK) throughout the winter of 2020-21, starting with small foamboard experiments, through to full scale prototype ‘sky pixels’.

Development was rapid, and we soon felt confident that the central, optical idea – to create the illusion of a distant sun – would actually work.

We discussed the plan with Hyundai UK, and they were very keen to fund the work.

It was then a frantic race to create the over 300 units needed, and the supporting tunnel structure, in time.

In parallel with this, much effort and negotiation went into getting permission to install the work during a period of national lockdown. However, Guy’s and St Thomas’ hospital (one of the largest teaching hospitals in the UK) was very supportive throughout and eventually managed to secure all required authorisations. The install process itself was made significantly more difficult and complex by having to follow strict lockdown procedures, but the work was eventually launched on 8 March 2021.

SOLA (Tunnel of Light) is a Squidsoup project, funded by Hyundai UK. The project was facilitated by Hope&Glory PR, and much of the physical production was undertaken by Splinter scenery. The work was made possible by the collaboration of Guy's and St Thomas' NHS Foundation Trust