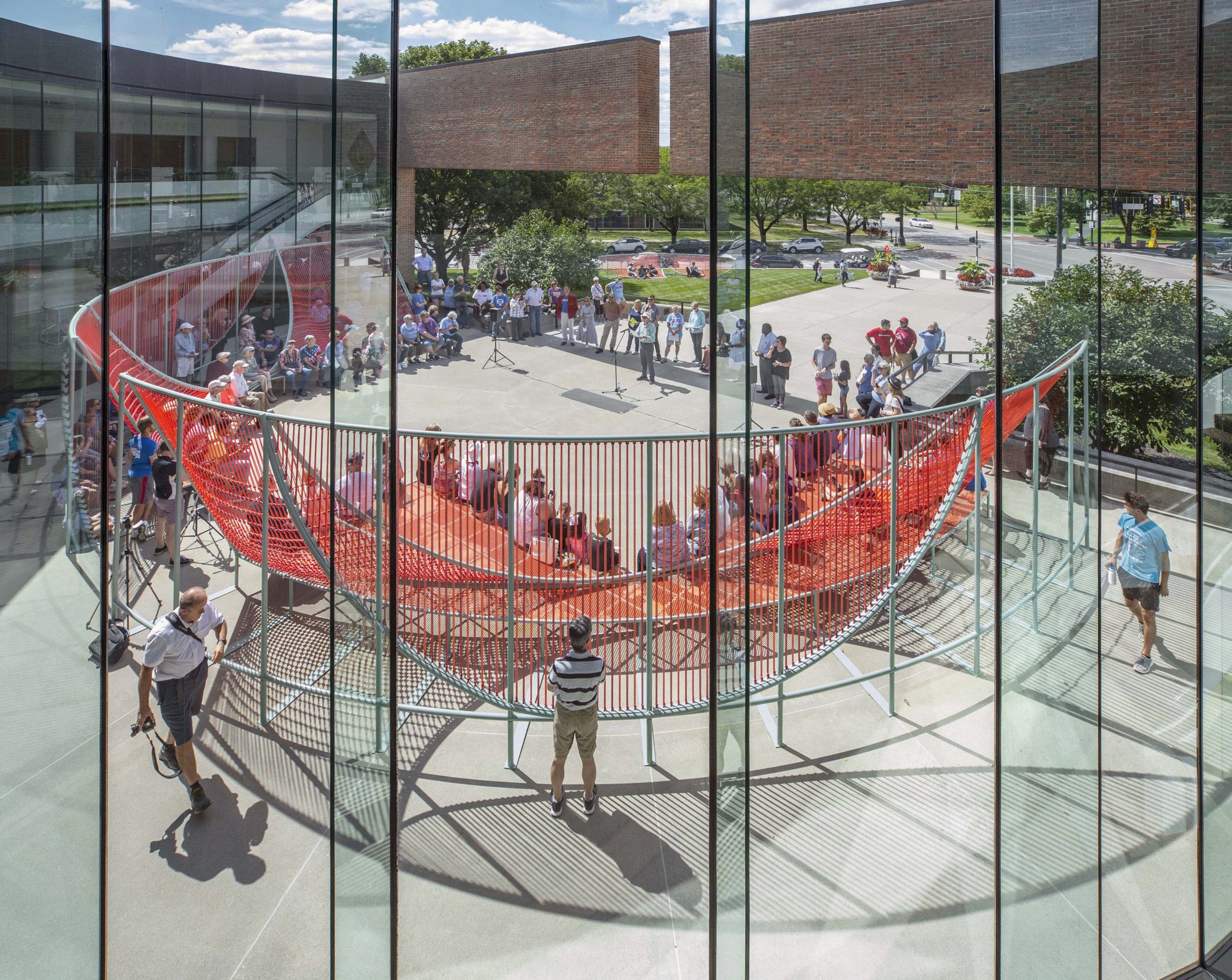 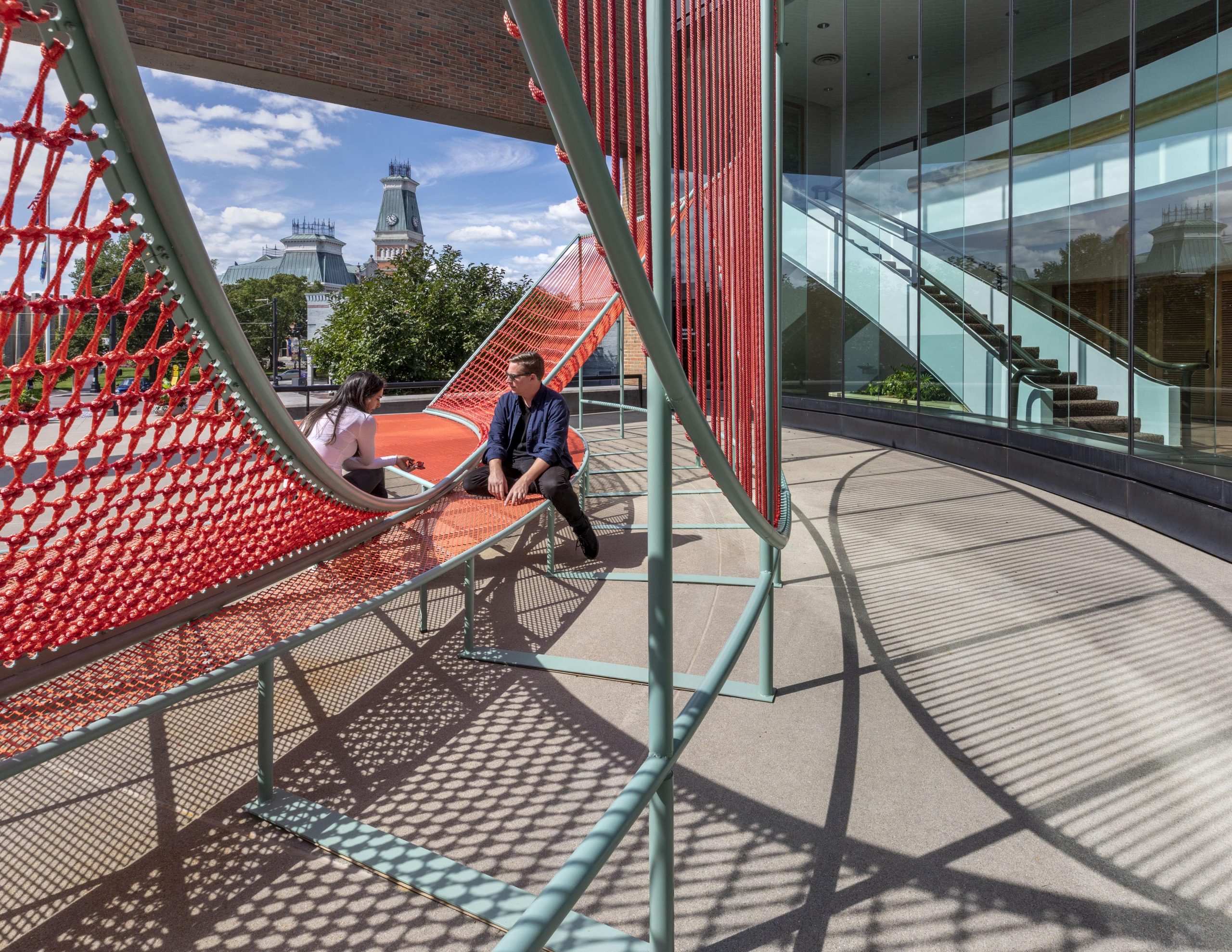 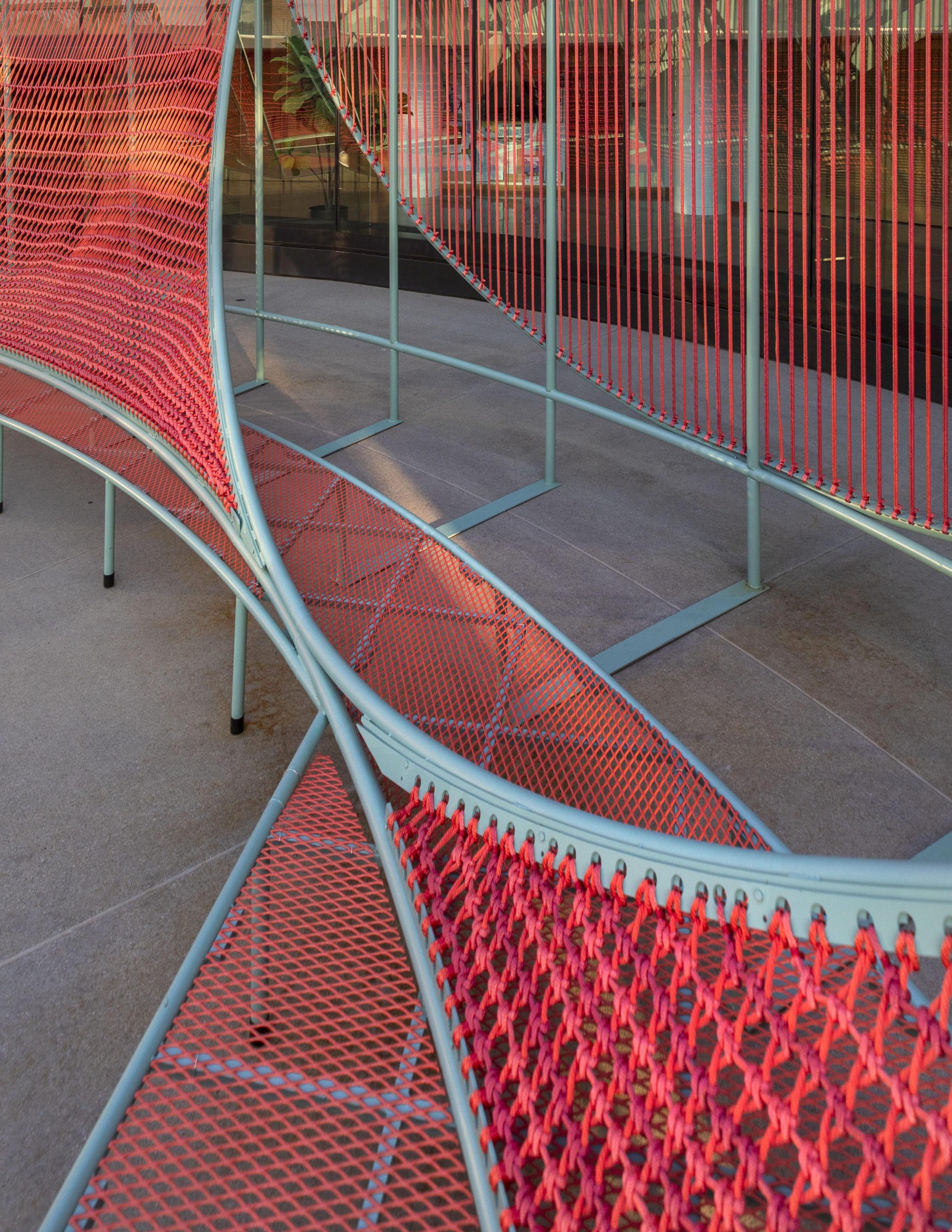 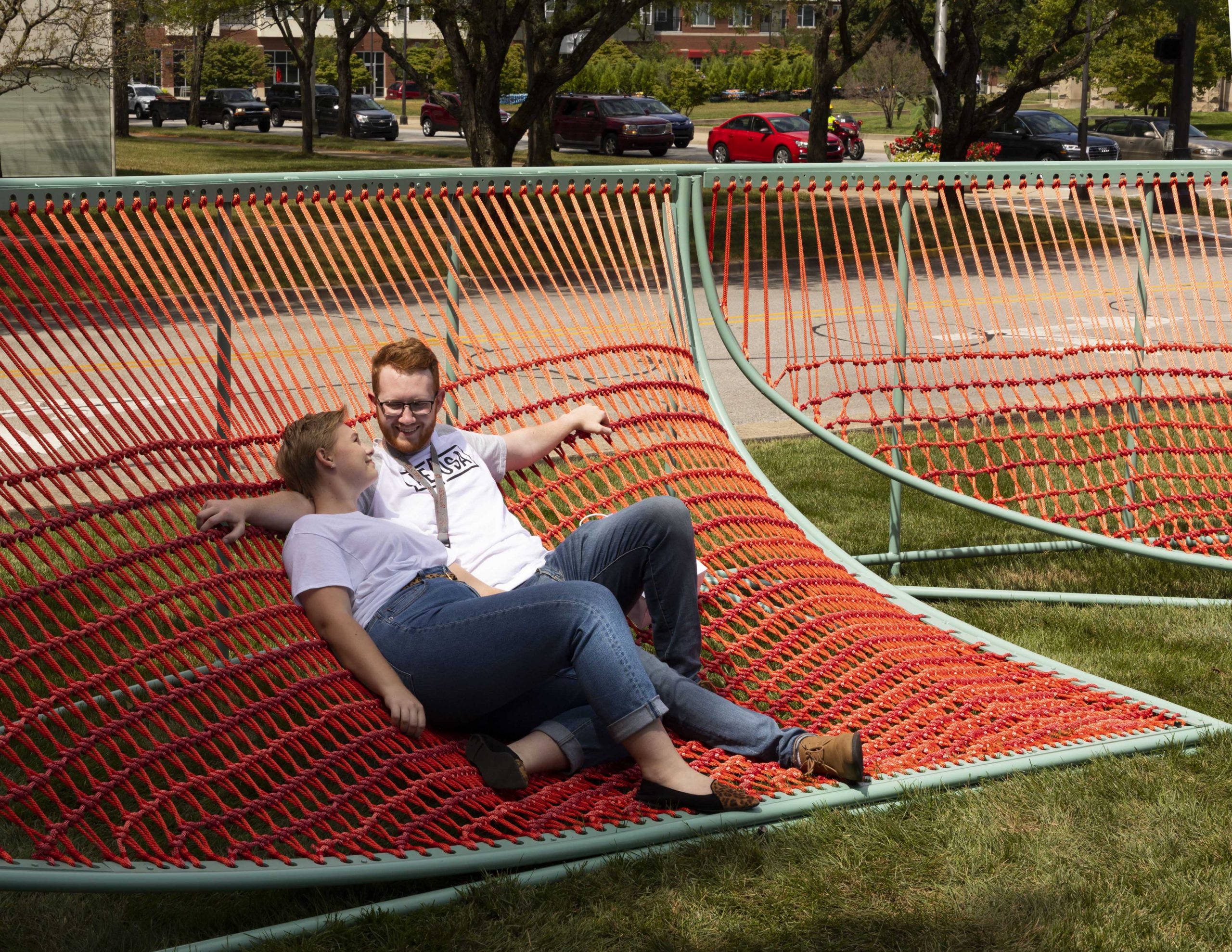 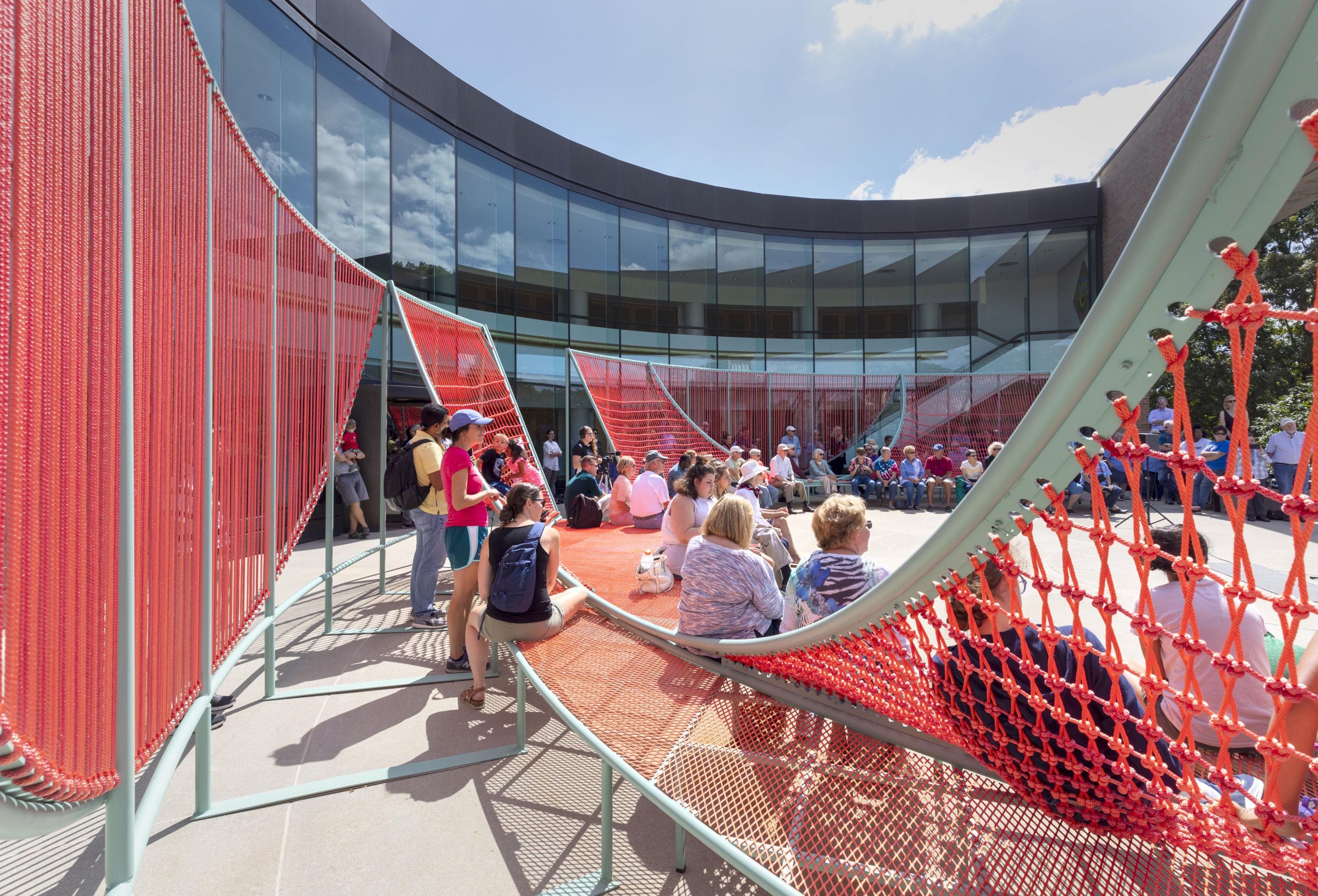 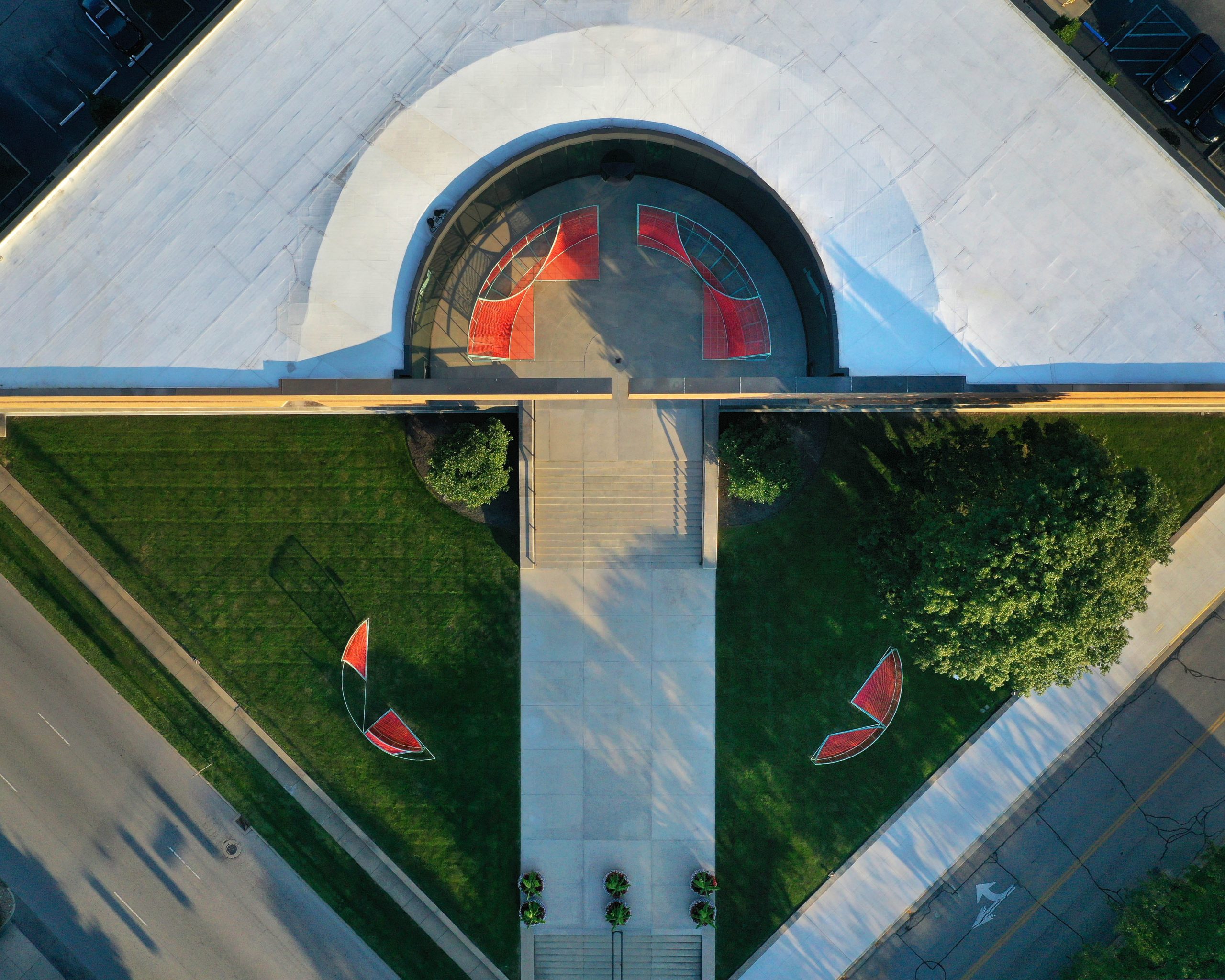 Soft Civic responds to the architecture of City Hall in Columbus, Indiana, and its symbolic role as the center of civic leadership in the community. Custom-fabricated structures with colorful woven surfaces activate the public spaces around the building’s main entrance as destinations for play, performance, and participation. Enhancing the existing activity at City Hall, the new structures host a series of community-driven events on the themes of democracy and leadership.

Addressing the monumental architecture of the City Hall building, the project turns its geometry into soft, pliable structures. The City Hall building, designed by Edward Charles Bassett of SOM in 1981, is a geometric puzzle of circles and triangles organized along a monumental stair. This project echoes the geometry of the building, finding other circles and lines—through seating structures and platforms— that connect with the building and suggest different points of attention. Soft Civic invites a range of impromptu activities, such as lunchtime lounging, seating for performances, or political meetings, and also hosts a series of events created in partnership with community organizations.

The softness of Soft Civic refers to the function of the space—a combination of relaxation and political participation—as well as its material quality. Constructed out of woven panels and steel frames, the new structures explore the softness of textiles at a monumental scale. Made through macramé knotting of nylon rope, the woven panels bring the textures of domestic space into the public sphere, encouraging playfulness and interaction at a site of governance. The red-orange color of the rope riffs on the brick of City Hall, transforming the colors of the building into a textile landscape. Created in collaboration with a textile workshop in Brooklyn, the knots of the weaving represent a communal effort and echo the project programming around collective participation.

Weaving by Powerhouse Arts in Brooklyn, NY, Steel fabrication by Ignition Arts in Indianapolis, IN