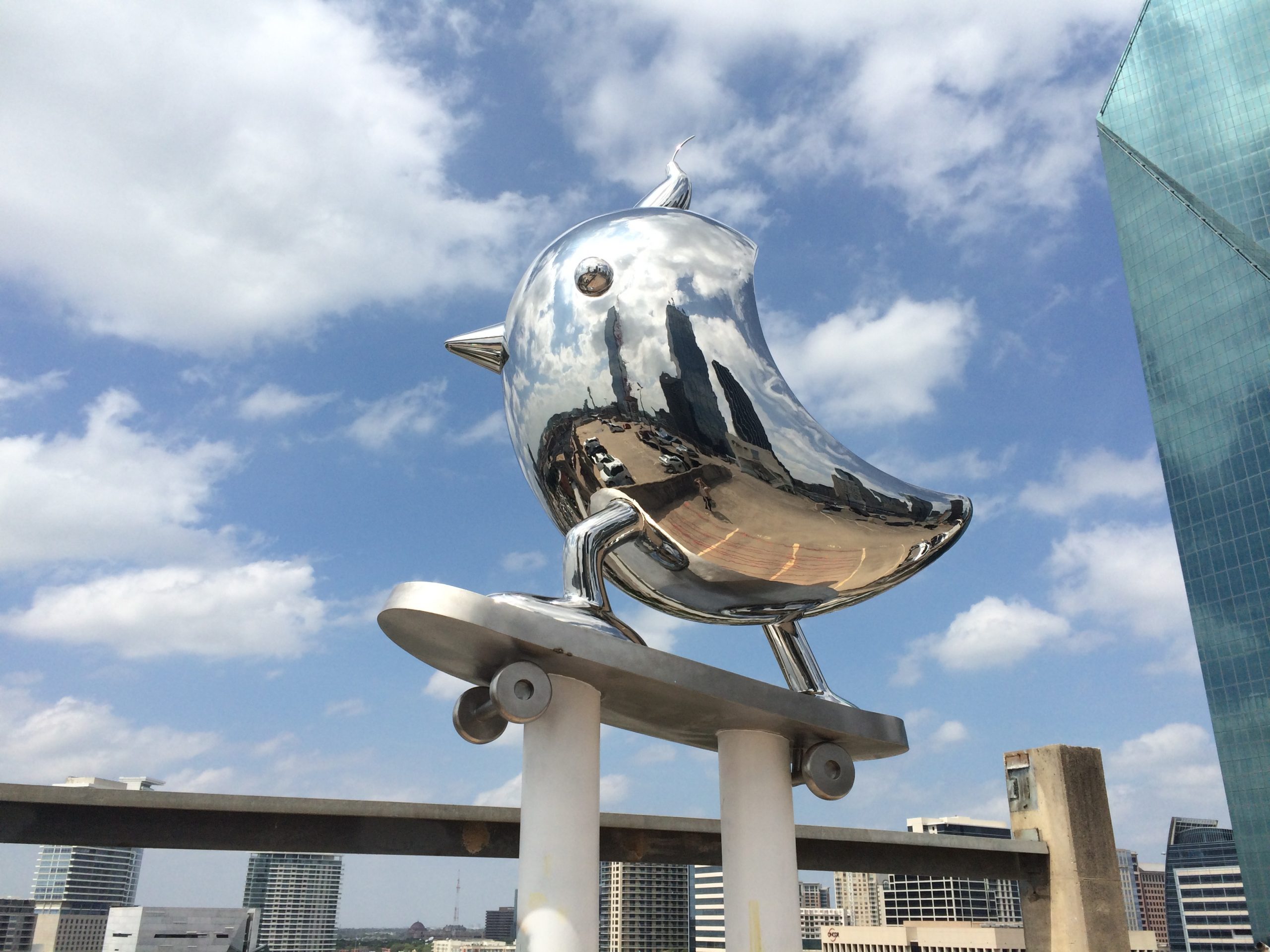 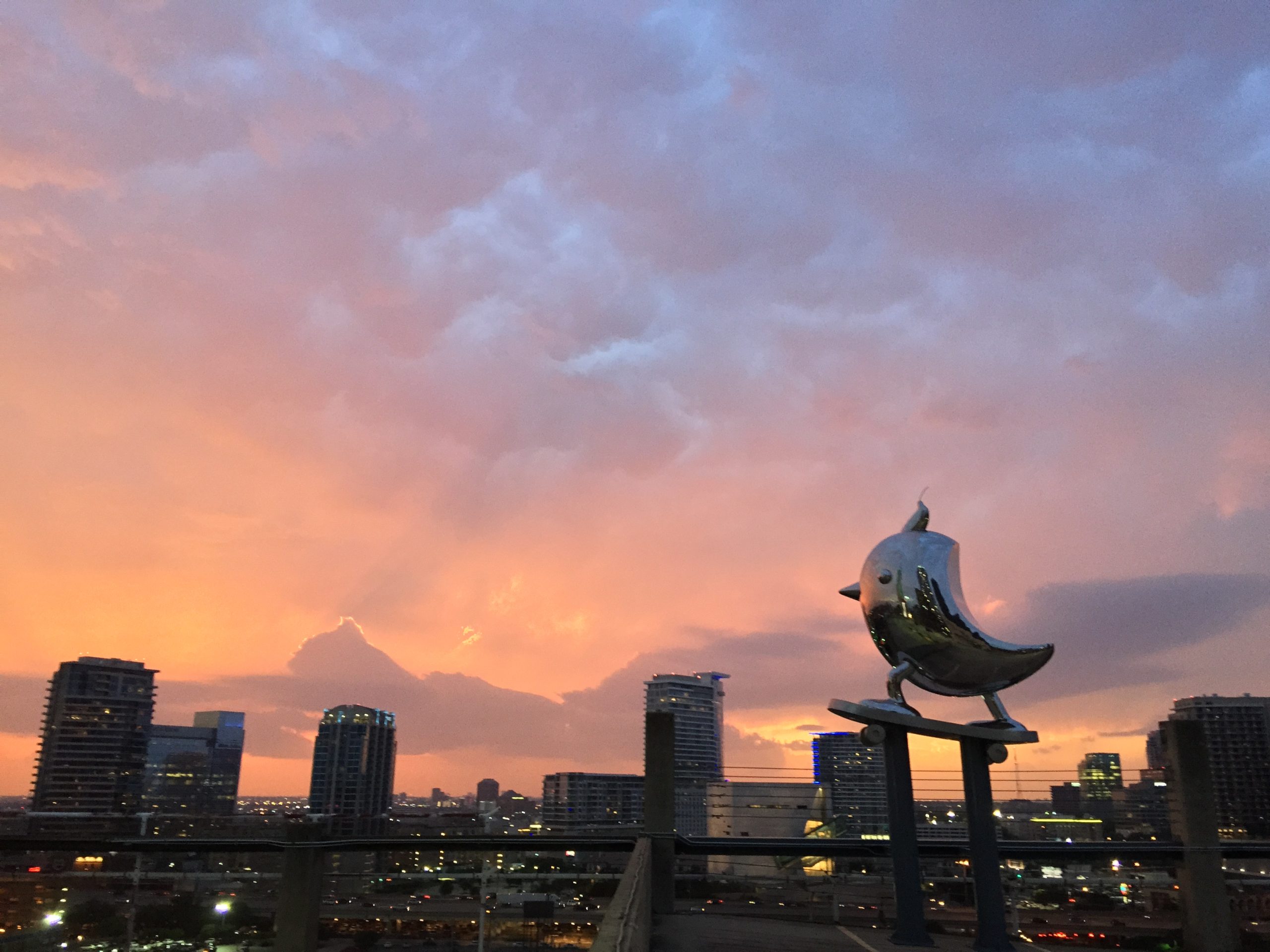 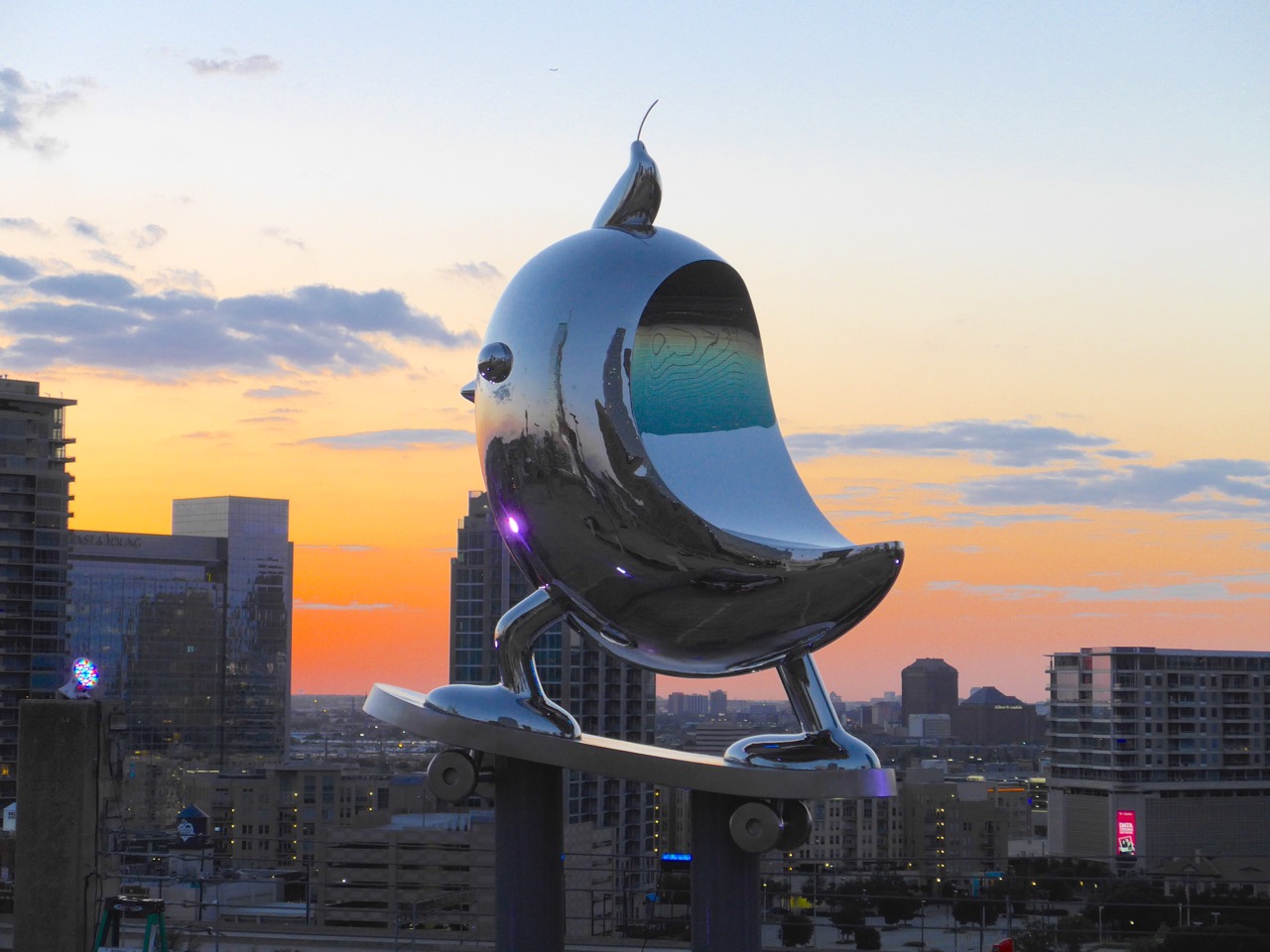 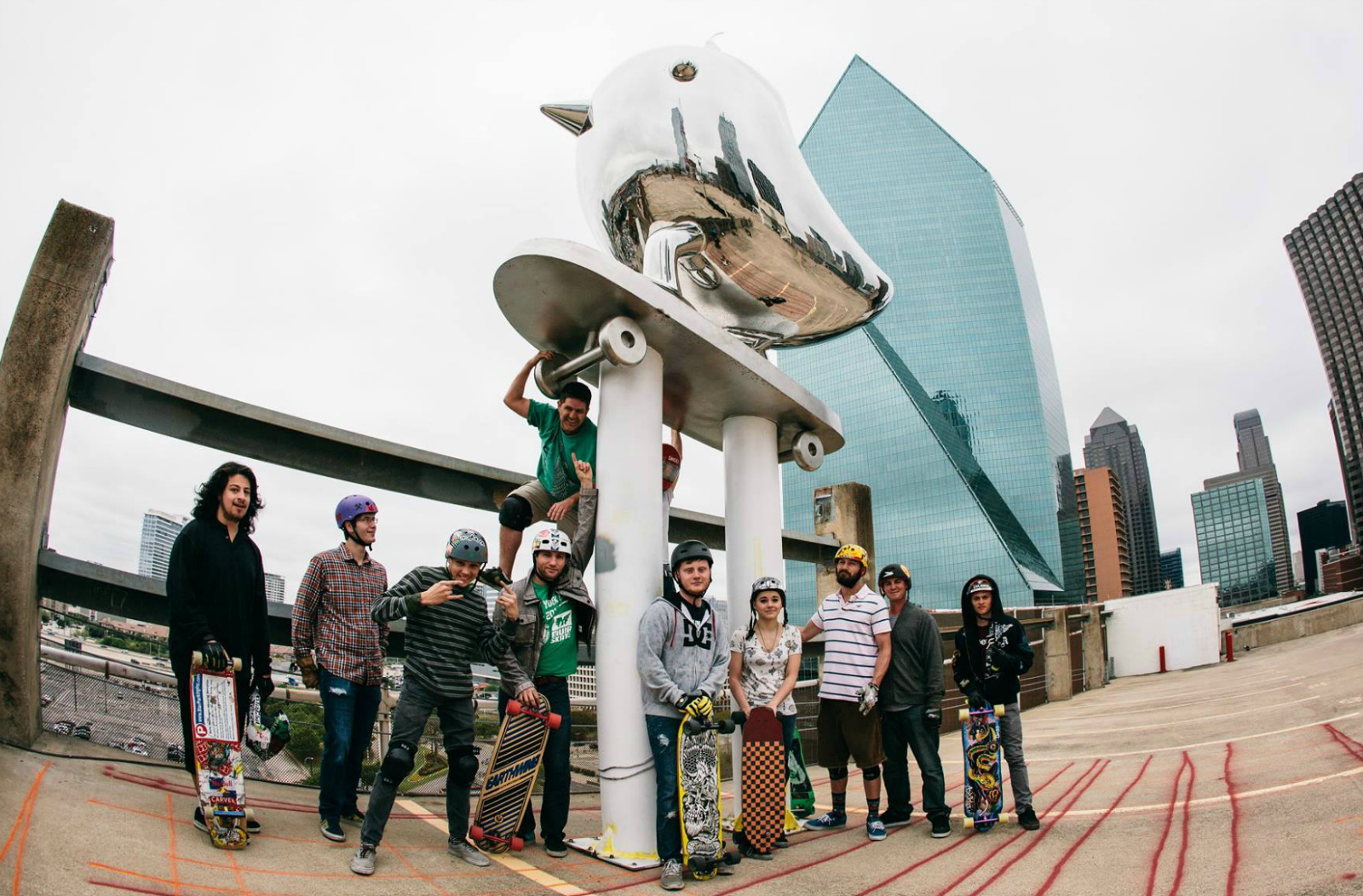 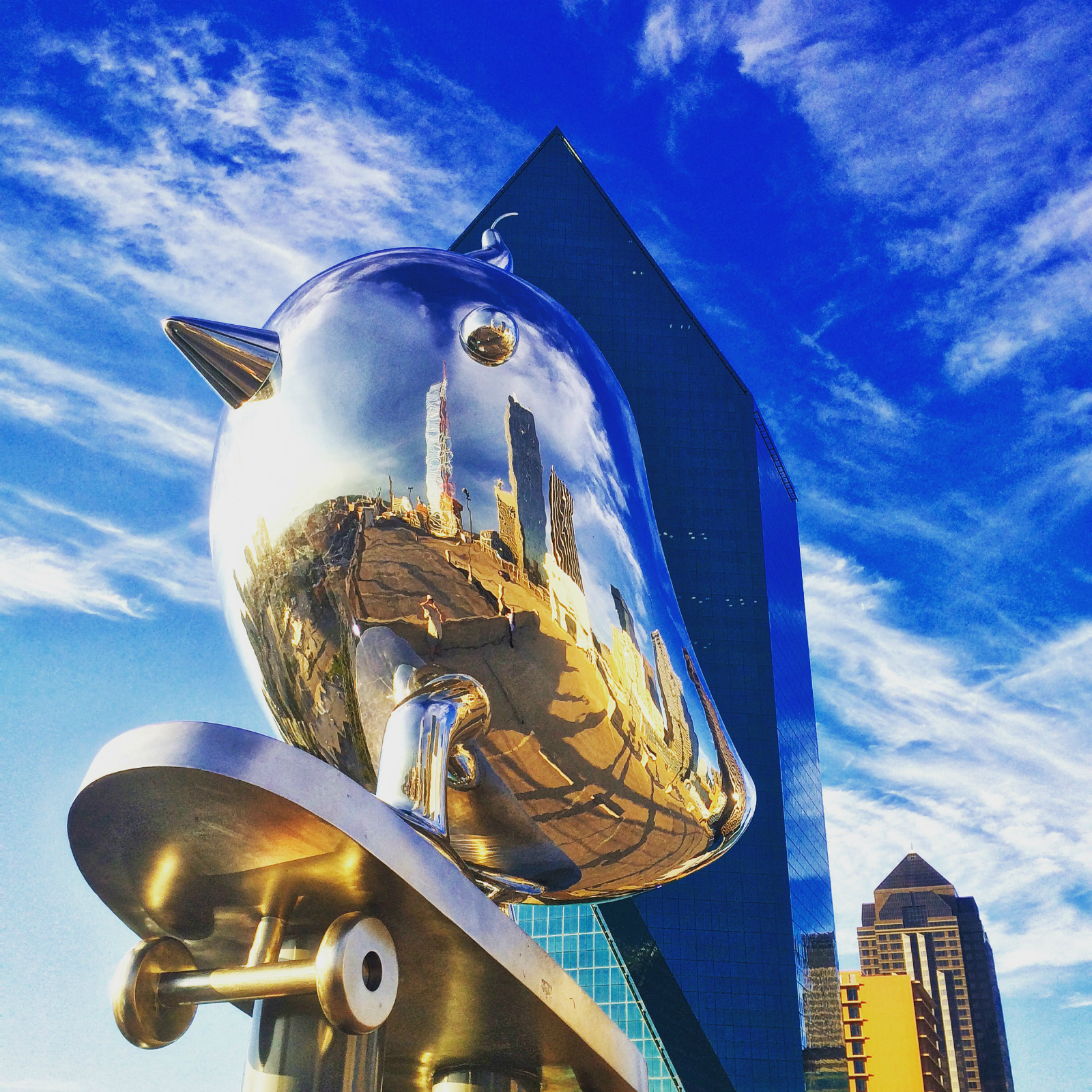 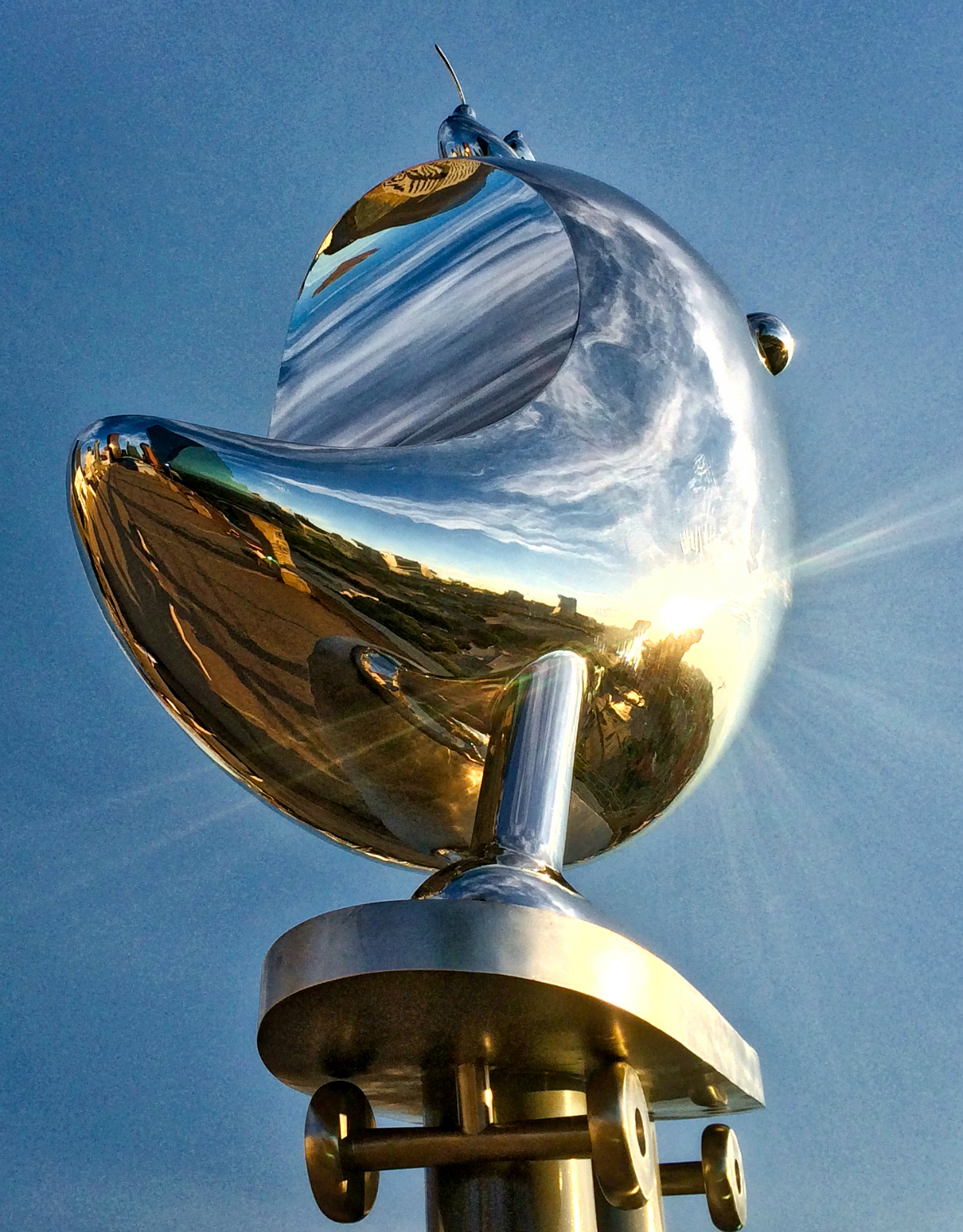 “SkaterBIRD” celebrates the leap of faith that artists and entrepreneurs take each and every day. Brad Oldham and Christy Coltrin moved their business downtown because they liked the inspiring can-do bravado of Dallas’ core; this is where creative business resonates and their studio/workshop location can be open to residents and visitors alike. The “SkaterBIRD” installation represents that there is no turning back. These artists are going forward with the belief that telling stories through sculpture is their calling. With their move, “SkaterBIRD” joined the Dallas skyline on the 13th story of the parking garage, signaling the artists’ work found below.

“SkaterBIRD” is a 22-foot-tall stainless steel invitation atop the downtown parking garage to go see the work of Brad Oldham and Christy Coltrin at the street level below. Instead of simply placing a sign at the street level, the artists approached the building owner to help support their effort to create a monumental artwork that would boldly mark their spot in Dallas. The predecessors of “SkaterBIRD” include various bird sculptures seen in installations such as "The Traveling Man" in Deep Ellum (east of downtown) and “Cactus with a BIRD” at the Hotel Lumen on Hillcrest Avenue (near SMU). Brad and Christy like birds to carry messages in story-based sculptures. A bird on a skateboard seemed like the perfect fit for their sculpture as the top level of the urban parking garage resembles a ramp to the sky. The all-in commitment of the skateboarder is something Brad and Christy can personally relate to. Further, skateboarders and sculptors riff in a creative, physical manner - attempting daring moves that involve years of practice.

Moving the studio and workshop to downtown enabled Brad and Christy to offer retail hours and sell smaller editions of their work, as well as to continue to work with clients on site-specific, public art installations. As they looked at the cost of retail signs, it didn’t feel right to invest that money when they could instead make artwork that demonstrated what they do. The building owner agreed that the artwork would enhance the building and create a sense of neighborhood in this intersection that is filled with surface parking lots.

Once “SkaterBIRD” was in place, Brad and Christy began concepting a dedication of the artwork that was as unique as the sculpture itself. They reached out to businesses and clients, and the short story is that on October 17, there will be an action sports, music and lifestyle event in their parking garage and adjacent parking lot, which is already the largest skating event in the central United States. The athletes are competing for the “SkaterBIRD Cup.” This sculpture is achieving its goal of creating a cohesive sense of neighborhood and creating awareness of the downtown studio/workshop of these artists.