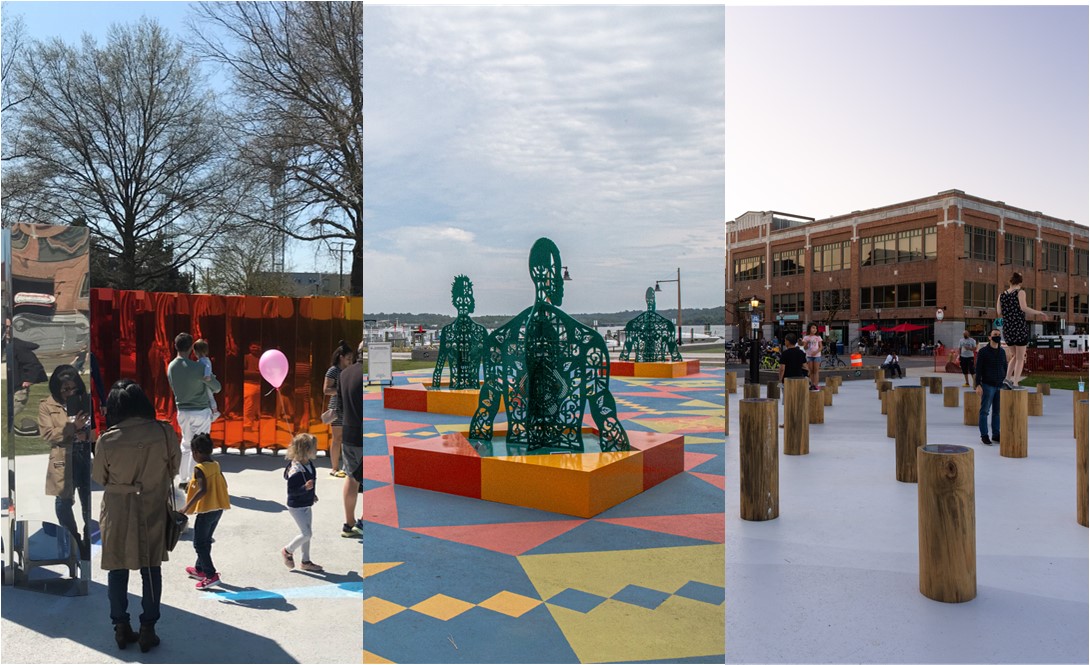 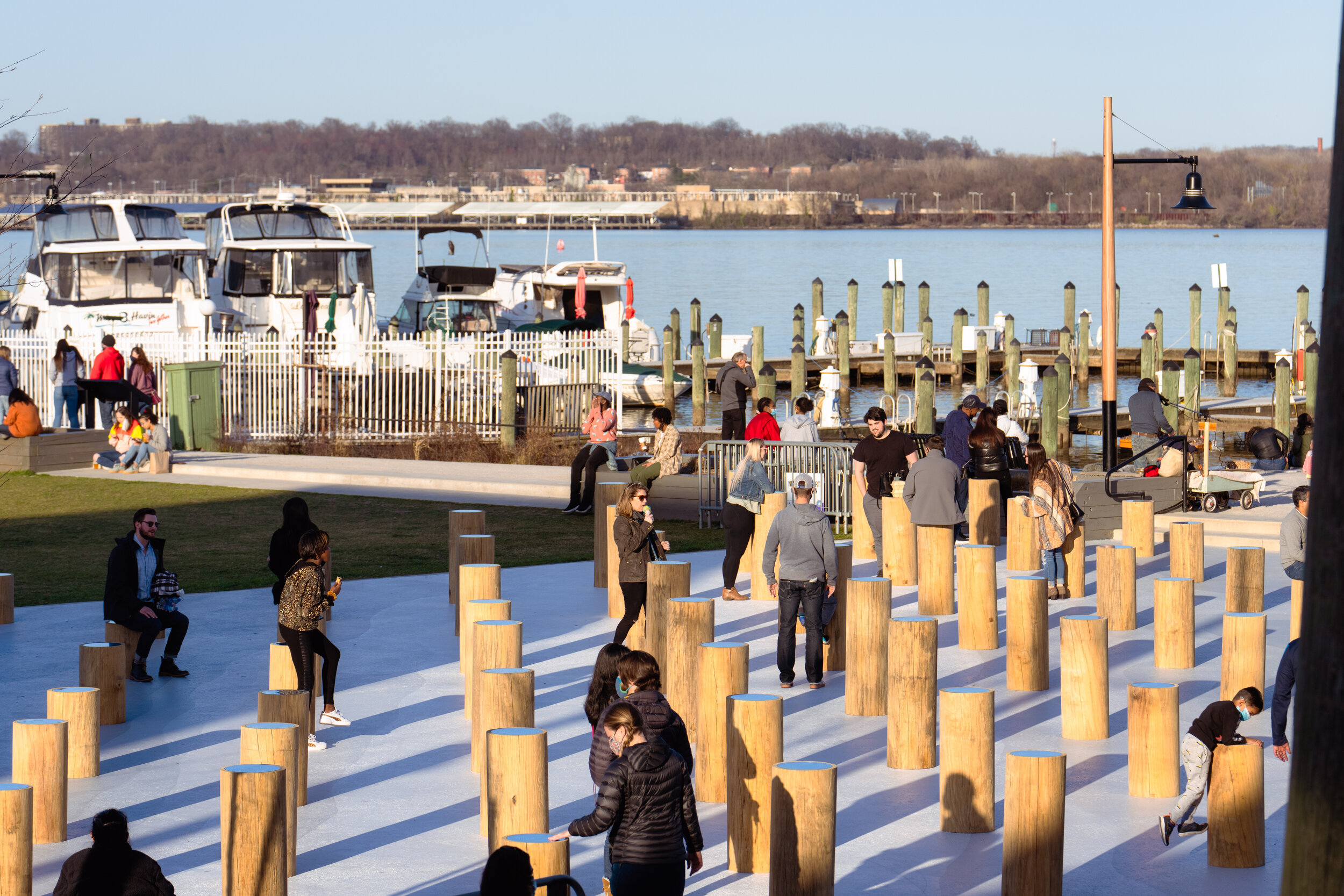 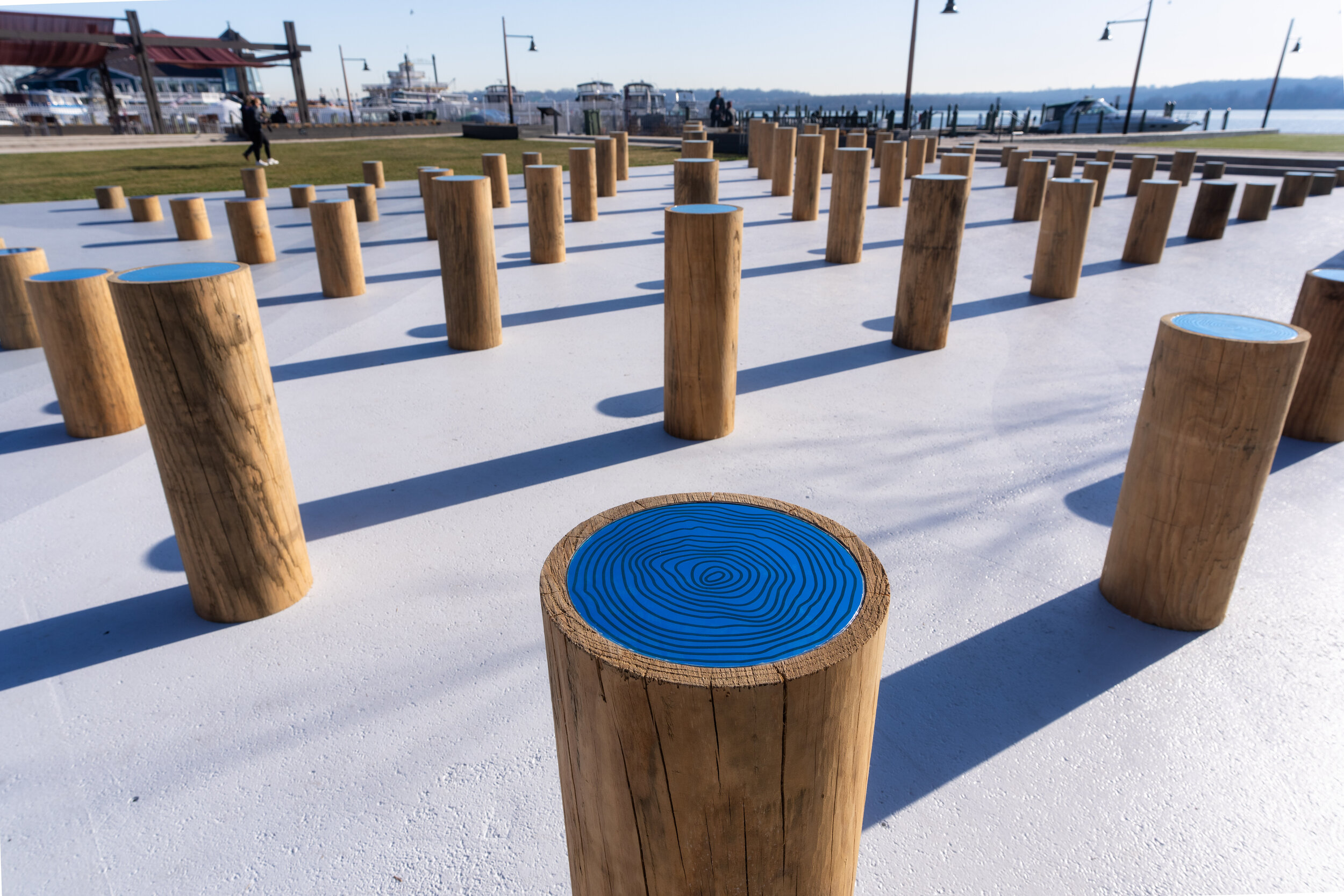 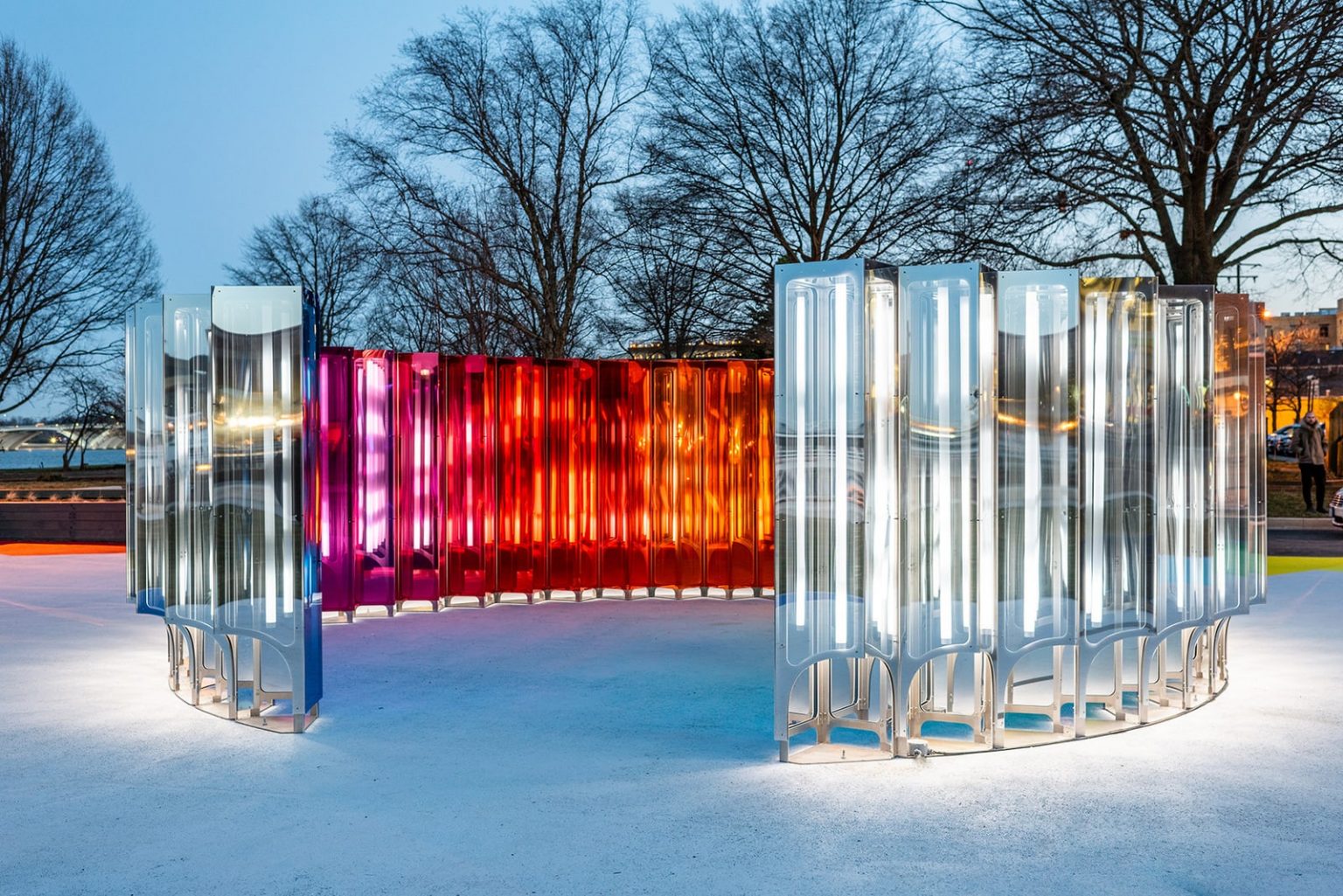 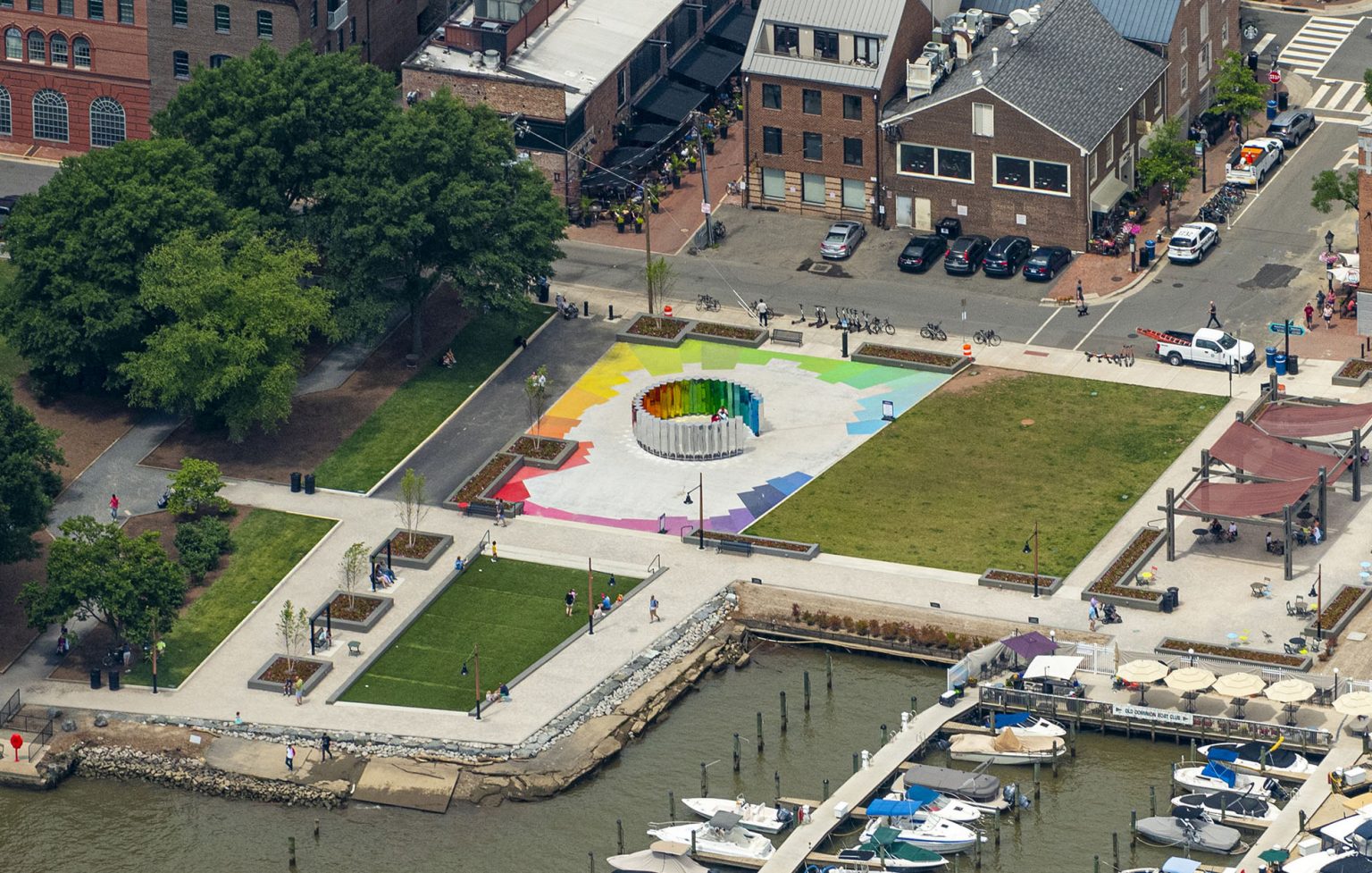 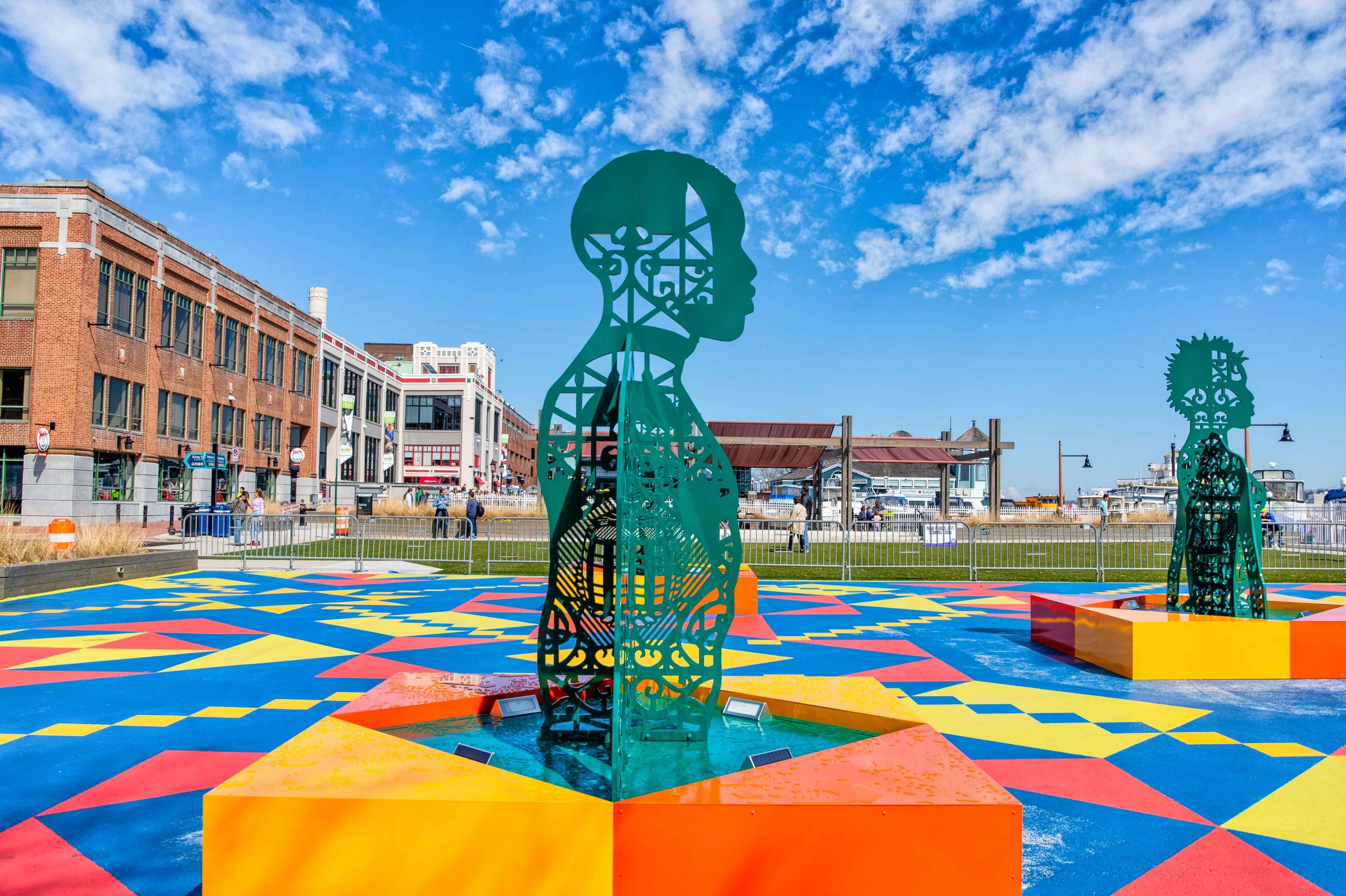 City of Alexandria Office of the Arts

The Site See: New Views in Old Town series of annual public art installations plays an important role in the success of Alexandria’s Waterfront Park along the Potomac River engaging visitors with interactive site-specific artworks.
SOFTlab’s inaugural installation Mirror Mirror (2019) references the Fresnel lens at Alexandria’s historic lighthouse. The interior and exterior are clad with a mirrored surface that reflects the surrounding environment in unexpected ways. Lights programmed to respond to sound providing different experiences from day to night.
Olalekan Jeyifous’ Wrought, Knit, Labors, Legacies (2020) frames Alexandria’s African American history featuring symbols representing Alexandria’s merchant and manufacturing past. The ground mural incorporates African American quilting and textile traditions when viewed as a whole, the pattern became an abstract grid/map. From this rich colorful surface four large figures emerged facing the river.
The undulating profile of over 100 wood pilings in Groundswell by Mark Reigelman (2021) is determined by the map in the ground mural referencing the floor of the Potomac River. Mirrored tops on the pilings shimmer in the light and are etched with growth rings that point to the passing of time and the ever-shifting waterfront boundary.

In accordance with the City’s Public Art Implementation Plan and Policy, the goals of the project are to:
• Amplify Alexandria’s reputation as an of-the-moment arts destination on the water with a new work of art that captures the public’s imagination and is unlike anything else you can experience in the region.
• Highlight Waterfront Park as a new civic space that gives prominence to the location where the mercantile city meets the river.
• Bring a new work of art to Alexandria that is informed by the context of the site.
• Foster engagement and interaction with a contemporary work of art on Alexandria’s historic waterfront.
• Attract visitors to experience a dramatic, visually compelling and unique work of art.
• Encourage repeat visits with work that changes between day and night or through the seasons.
In addition, the Public Art Program has identified the following internal goals related to the project:
• Take advantage of the interim nature of the site to test out different approaches to public art for this location.
• Create a signature exhibition that raises awareness of the City’s public art program.
• Accommodate plaza programming and other plaza uses.

Alexandria’s Public Art Program has built a reputation for working with artists in innovative ways to realize new projects.
For the Site See series, work begins one year prior to the installation when the City issues an invitational Request for Qualifications for a site-specific, temporary work of art on display from March to November of each year. The applications are reviewed by a community task force who also conduct interviews with select artists and their recommendation is approved by the City’s Arts Commission. Prior to developing their concept, the selected artist visits Alexandria, tours the site, and meets with key stakeholders including the City’s history and archaeology department as well as with staff from the tourism office.
While the artwork can be sited anywhere within the new portion of the Park, the project must include a ground mural for the asphalt plaza which can be designed by the artist or a collaborator of the artist’s choosing.
For each installation the City commissions original site-specific performances by local artists including dance, music, and spoken word in response to the art and to engage the public.
Since the launch of the program, the City has been working with the consultant team Via Partnership to support the administration of the project.

Though each artist was given the same assignment and goals the artworks created for this series so far have been different in form and content, exploring various aspects of the site’s history/geography/use and engaging visitors in different ways and has been popular among the public and well received by art critics generating thousands of social media posts and featured in publications such as The Washington Post to Architectural Digest. Michael Szivos is the founder of SOFTlab, a design studio based in New York City which operates at the intersection of architecture, art, video, and interactive design. By examining local conditions, they create interventions that become an extension of something existing on site that might not be readily apparent. Olalekan Jeyifous has spent over a decade creating large-scale artwork for a variety of public spaces including a banner wrap for the Corcoran Garage in Durham, NC and was recently commissioned by the City of New York, with collaborator Amanda Williams, to create a monument for Congresswoman Shirley Chisholm. Mark Reigelman’s site-specific installations deal in the remarkable. Whether it be the materials he uses, their head-turning scale or their placement in public spaces, his works marry wit, context, and the element of surprise.