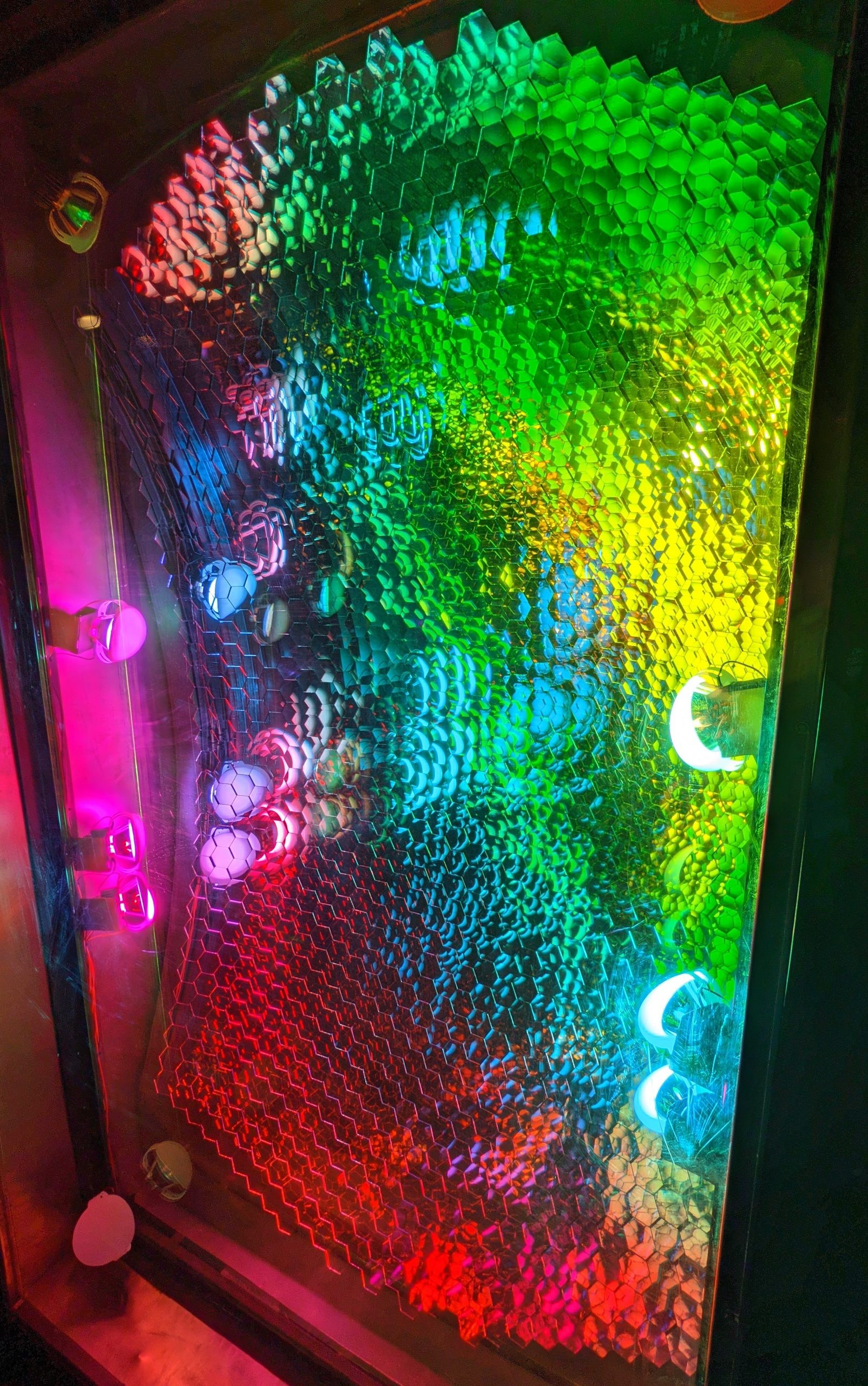 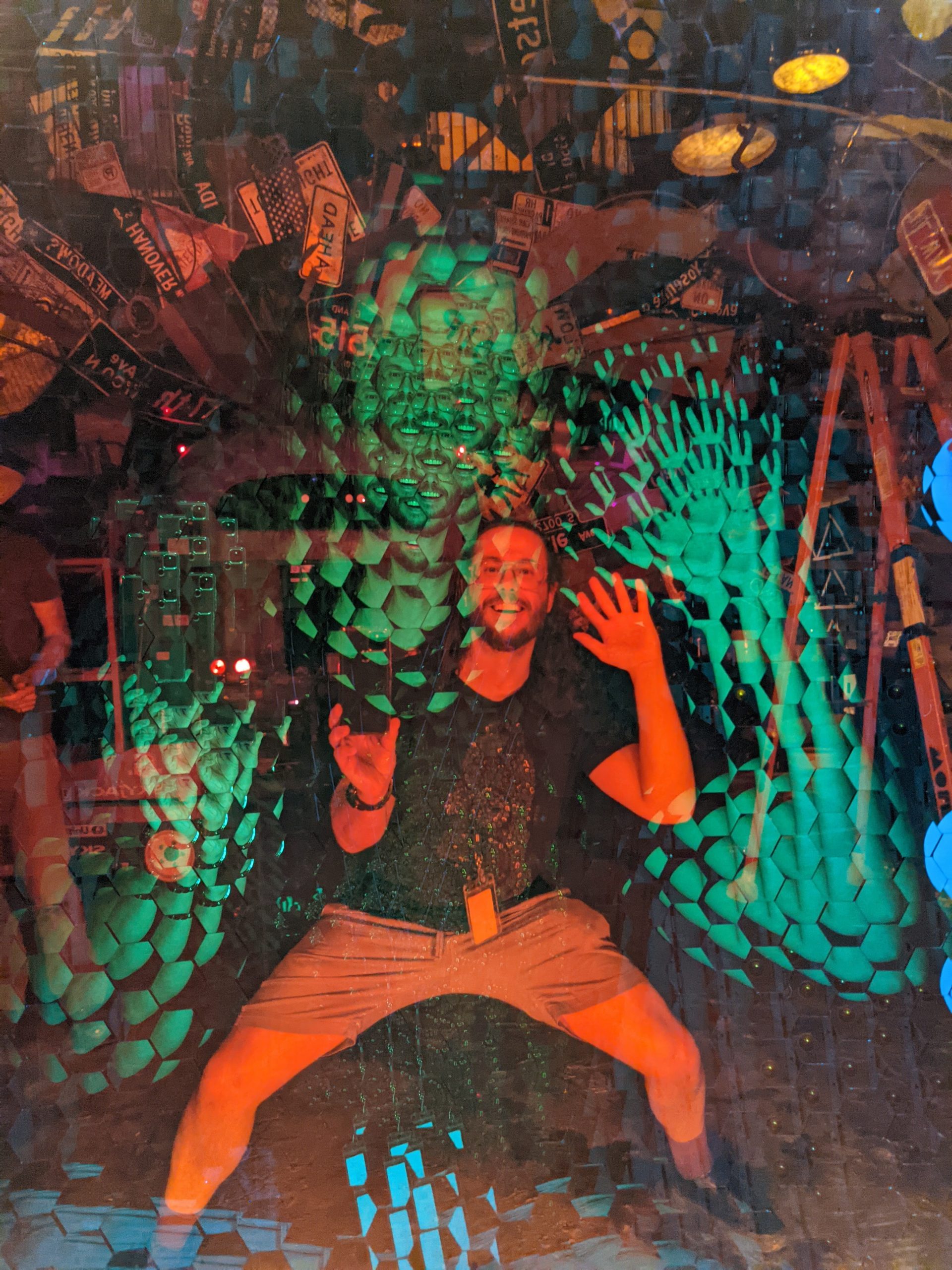 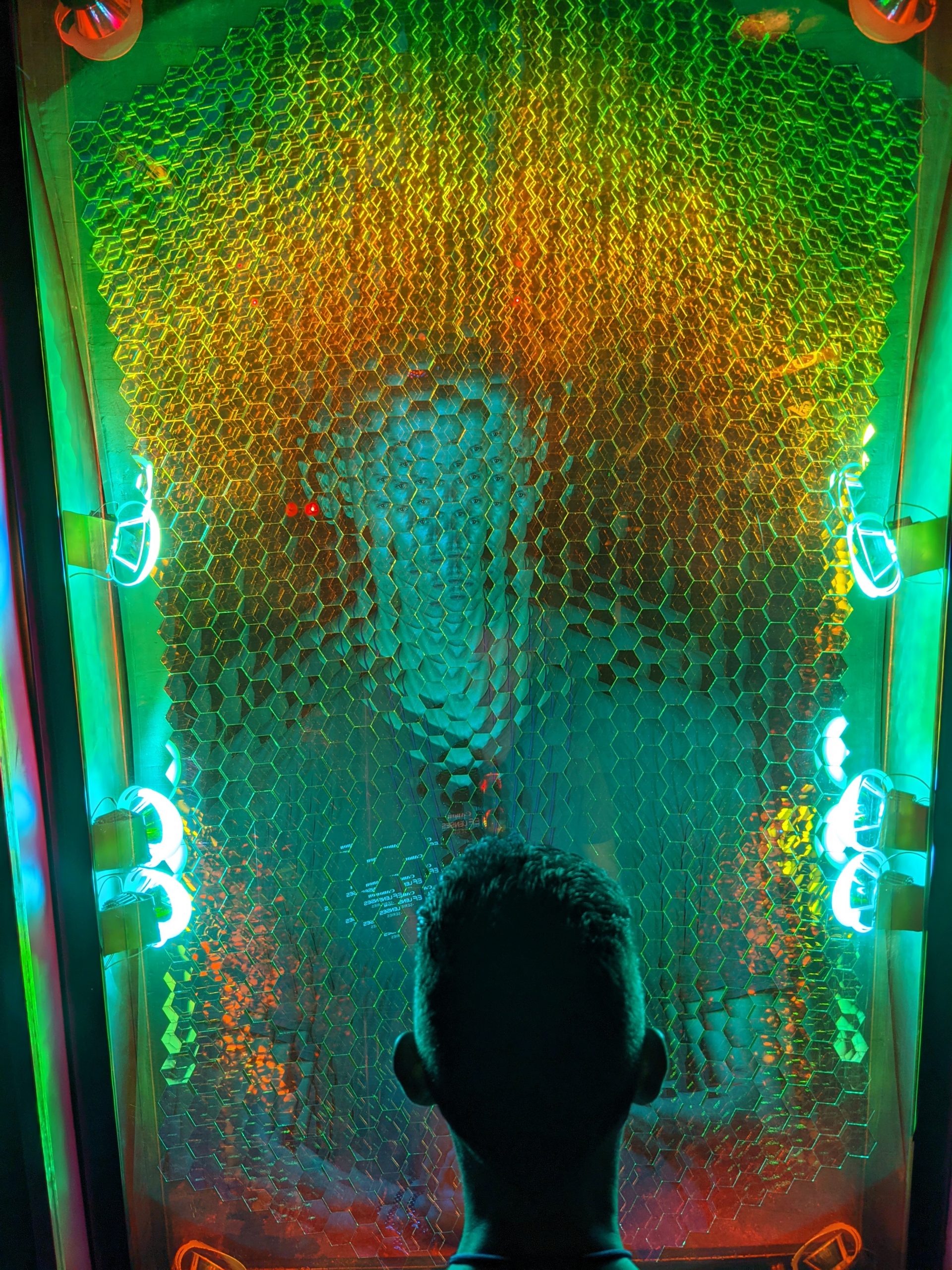 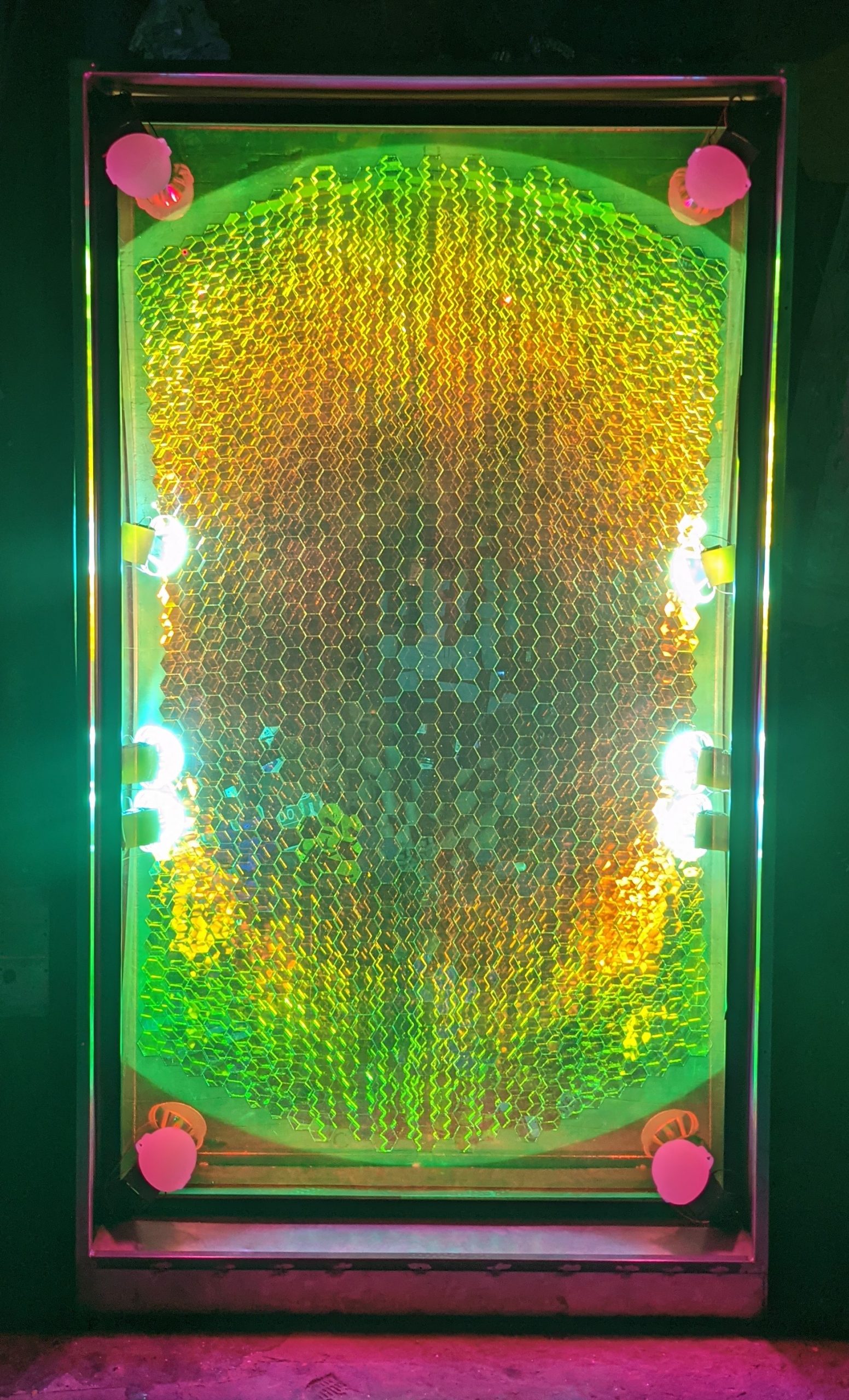 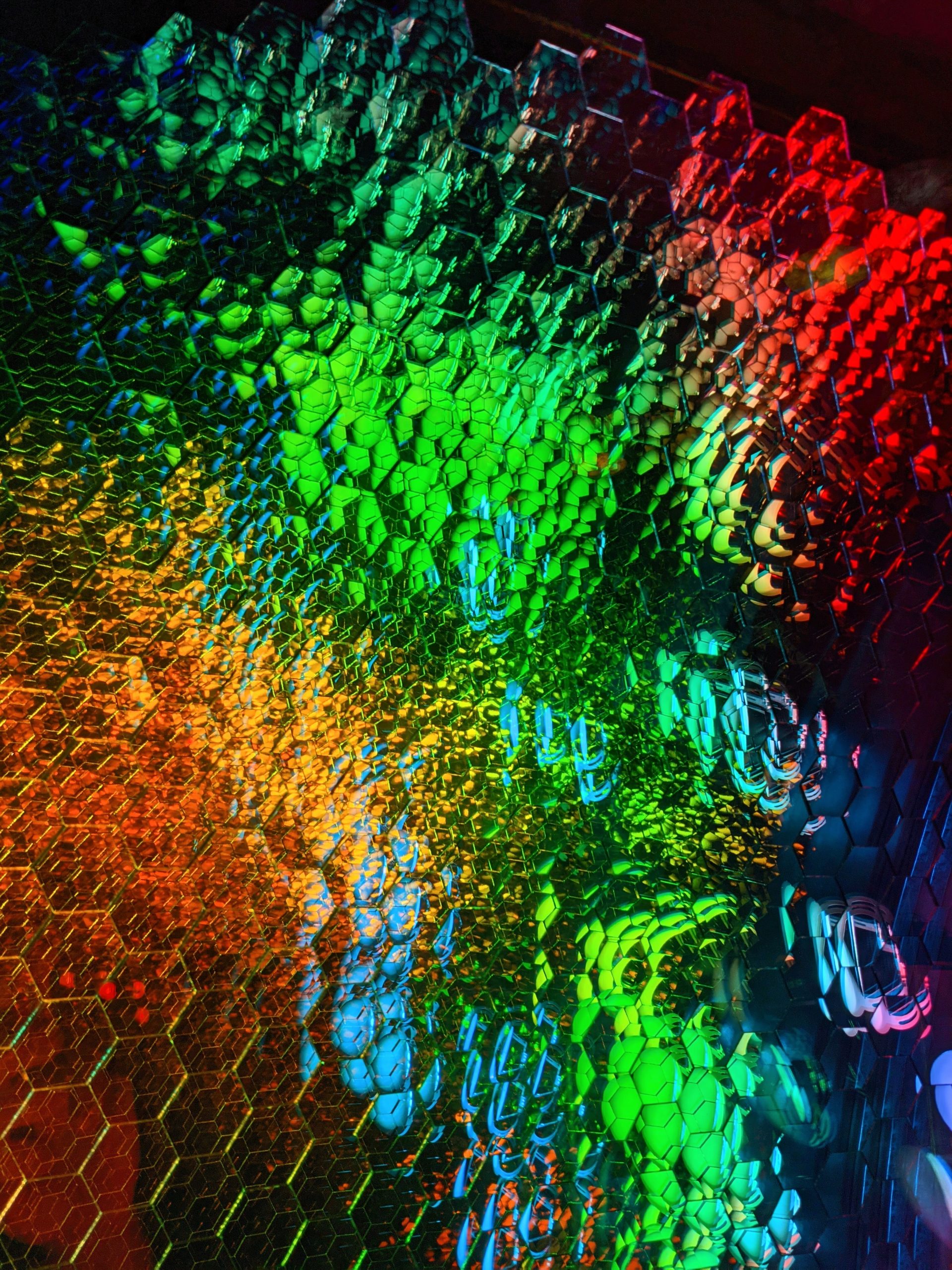 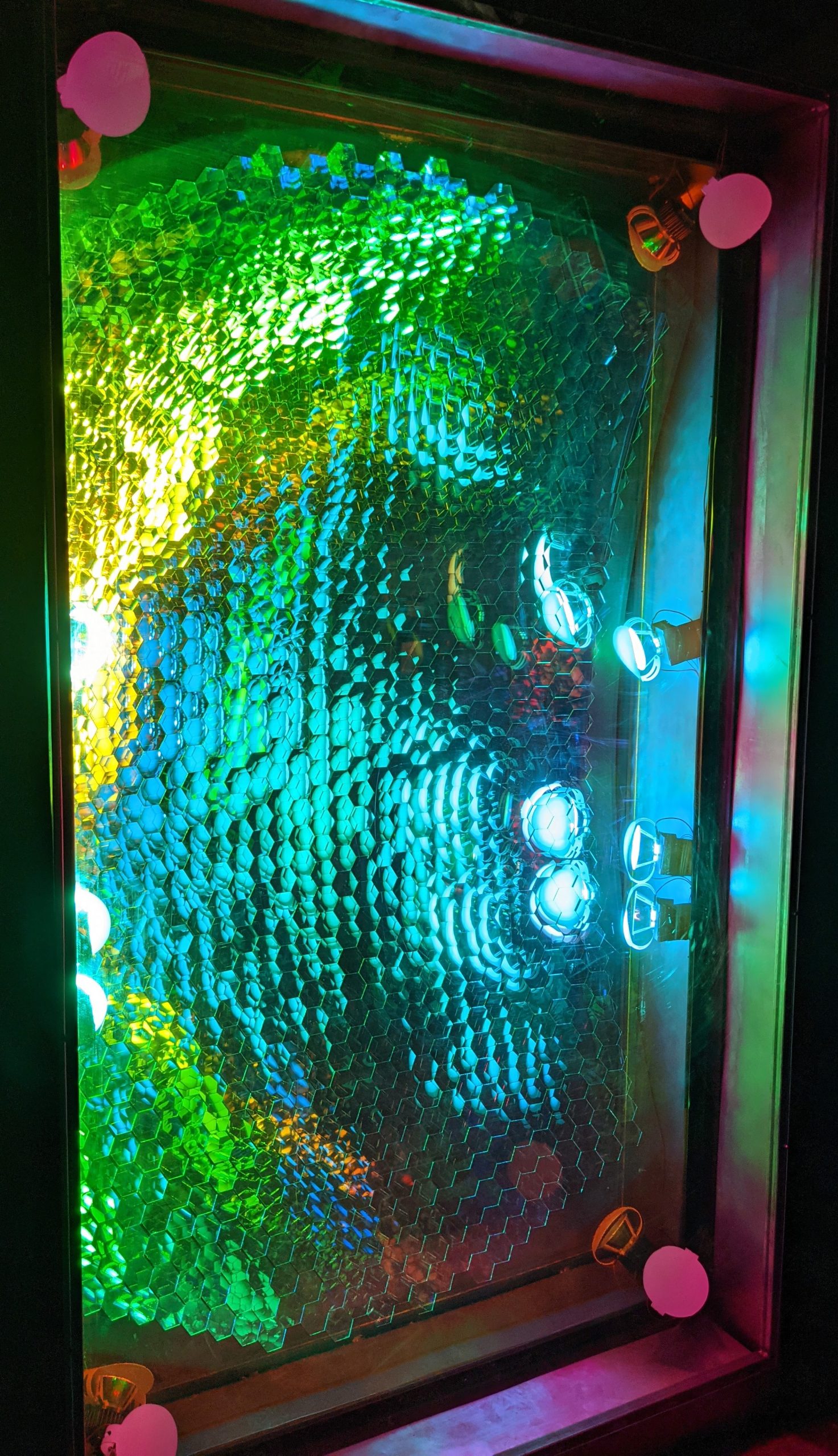 Simultaneous Self is an interactive mirror sculpture made for Meow Wolf’s Convergence Station in Denver, Colorado. The sculpture relies on layering semi-reflective / semi-transmissive materials over a layer of tessellated reflection and using directed lighting to create varied effects. The sculpture has two cycles: 1) an internal lighting setting that creates a color-shifting stacked rainbow grid, and 2) an external lighting setting which creates duplicative reflections of viewers and optical illusions where the separate reflections of the viewer move differently from each other.

Meow Wolf projects are immersive experiences. My sculptures frequently incorporate reflection to invite participation with viewers. I find reflection to be adaptive, reactive, and dynamic, inviting exploration and play. It was essential for me to create a sculpture that allows viewers to become immersed with themselves. Another goal of this project was to make this sculpture visually accessible to as many people as possible. The focal point of the sculpture is approximately 100 cm tall, allowing children and those in wheelchairs to have an optimized visual experience with the sculpture.

Simultaneous Self took many years to transmute from a mental goal image to physical object. Prior to concept being pitched to Meow Wolf, I had been playing with smaller prototypes that produced similar effects. The first stage was pitching the design to Meow Wolf. Dave Brann contributed a rendering of the proposed concept, which along with photos and videos of my prototype, was able to convey the concept persuasively with Mitch Hoffman. I worked closely with Meow Wolf's Josh Davisson, Matthew Bradley, Sandra Wang, Matt King, Chadney Everett, and Annie Geimer to finalize specifications and placement of the sculpture within Convergence Station. Nate Koral and I developed the mathematics and optics. Nate also designed and fabricated the custom lighting. Evan Beloni designed the frame/encasement. Once production began, Nate and I fabricated the curvature, while Evan Beloni, Mitch Hoffman, and Tim Omspach fabricated the metal frame. I fabricated the glass mirror tiling and assembled the reflective elements with Scott Wilson, Charlie Robbins, and Ryan Elmendorf. I then determined optimal distance between the reflective backing and the front semi-transmissive panel. Our team then assembled the project and installed it within Convergence Station.

This project was a dream come true. It was an absolute joy to work with so many talented, motivated, and brilliant people. I learned a lot and grew a lot from this project. Thank you so much to everyone who was involved! To those reading this entry, feel free to reach out to me, or let me know when you're in Denver and perhaps we can go see the sculpture together!