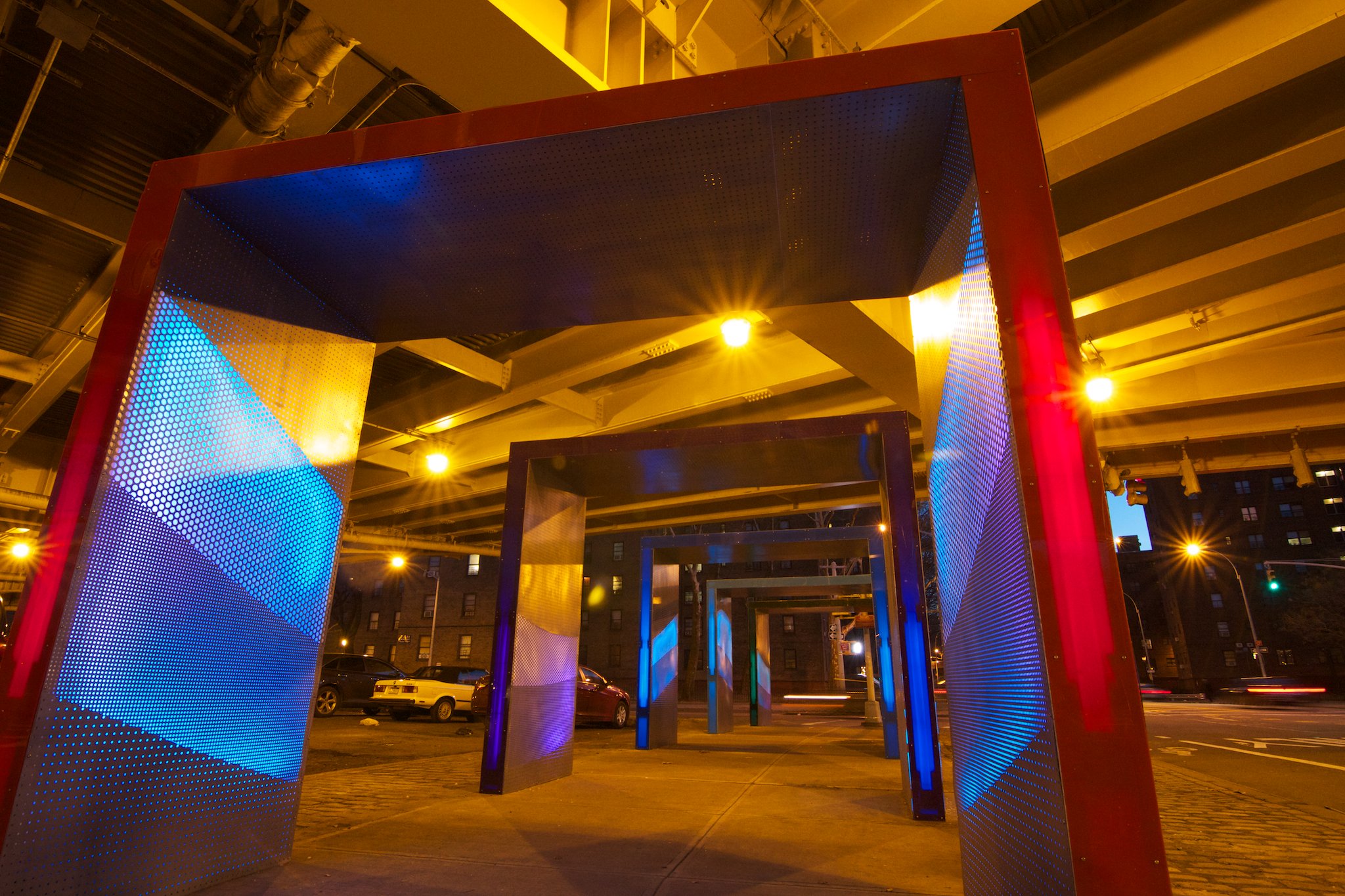 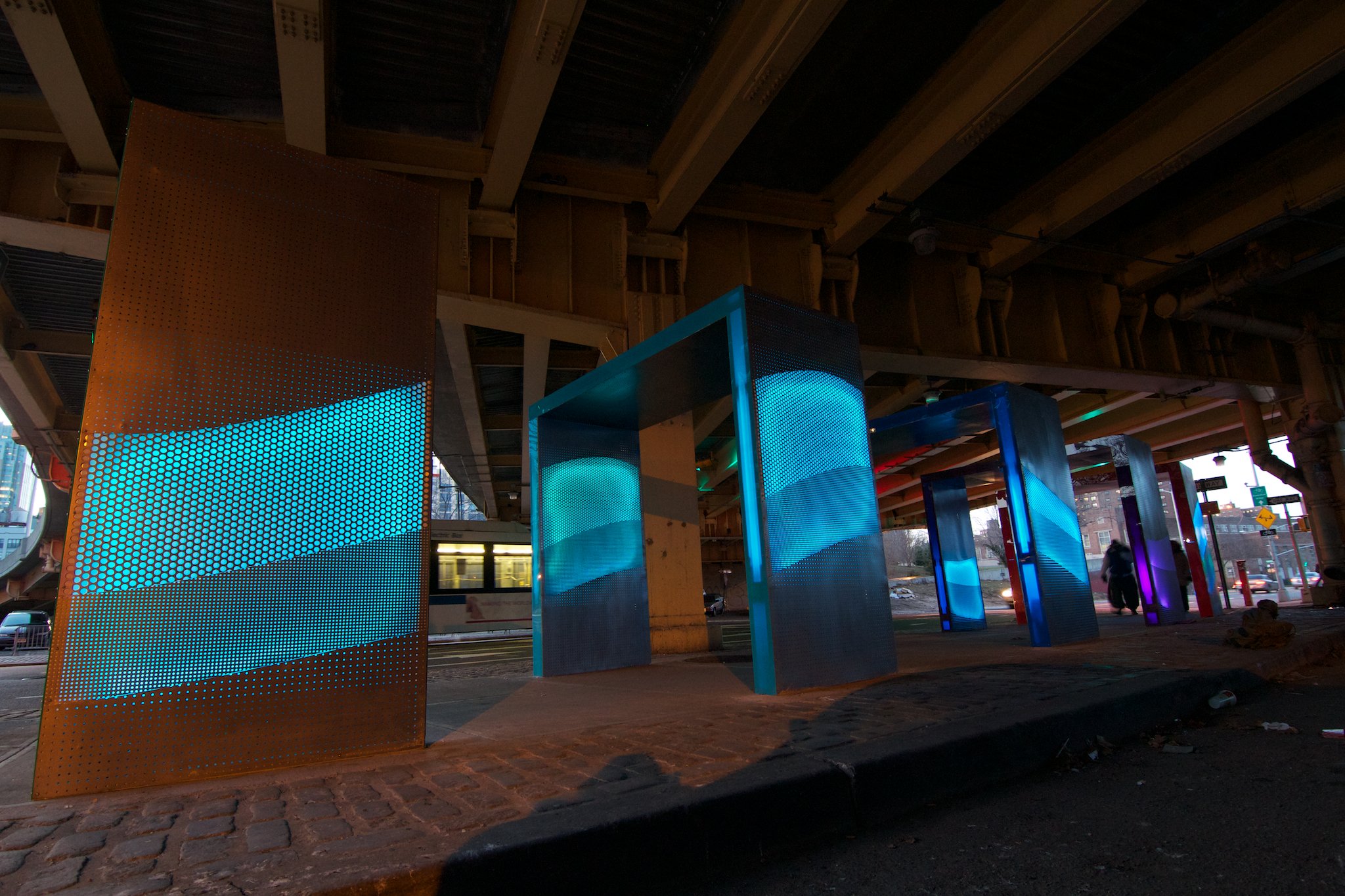 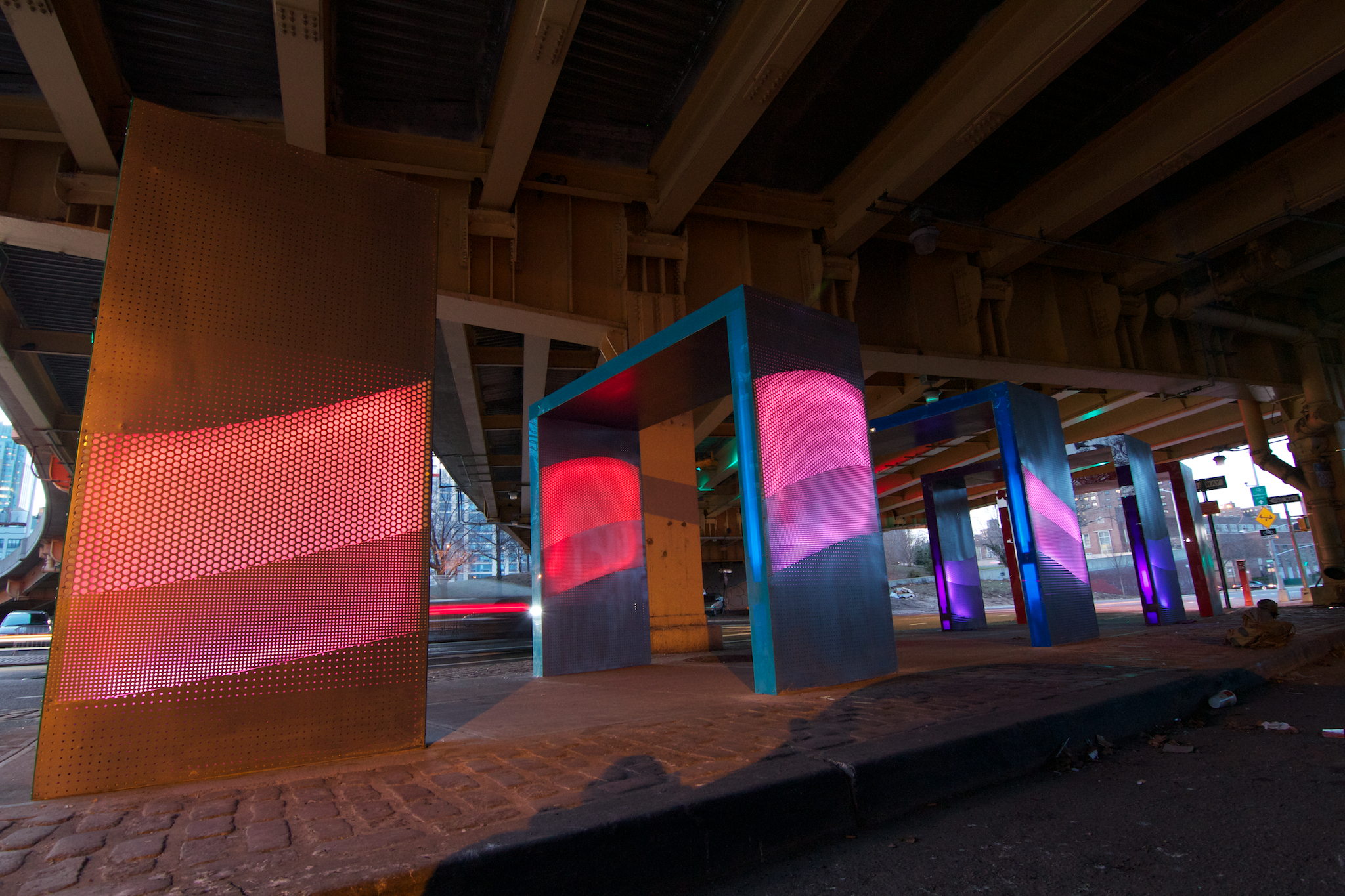 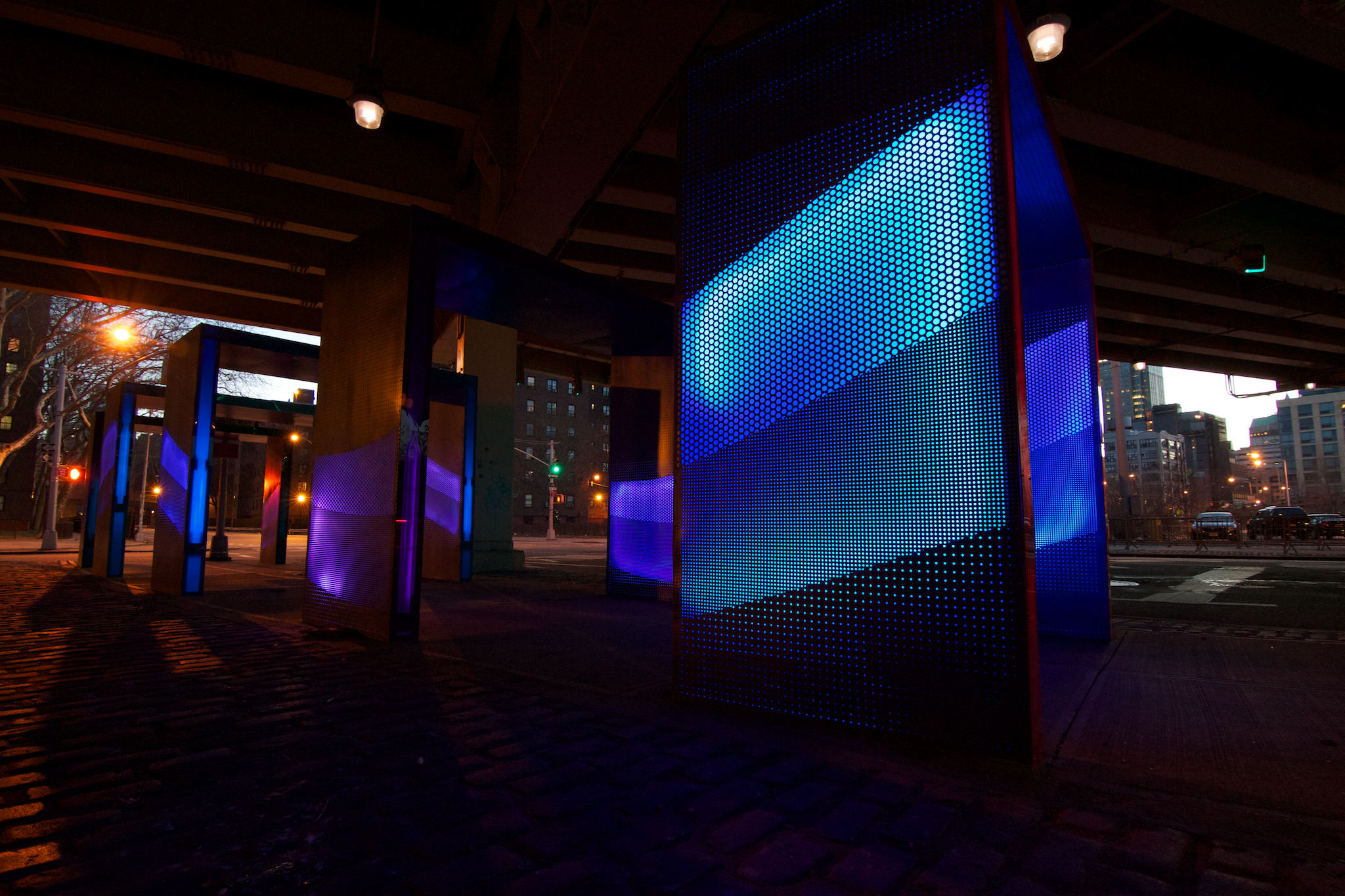 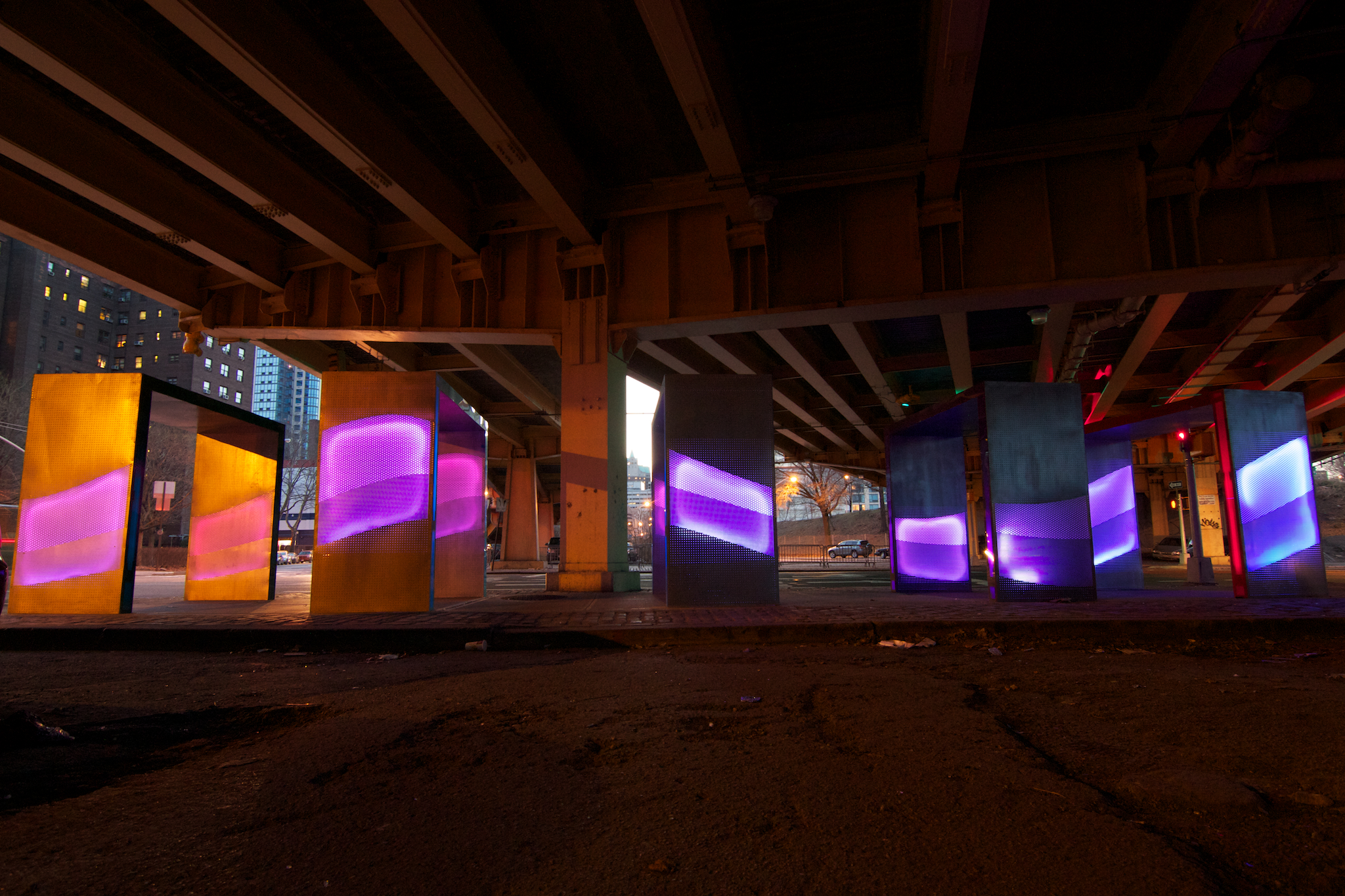 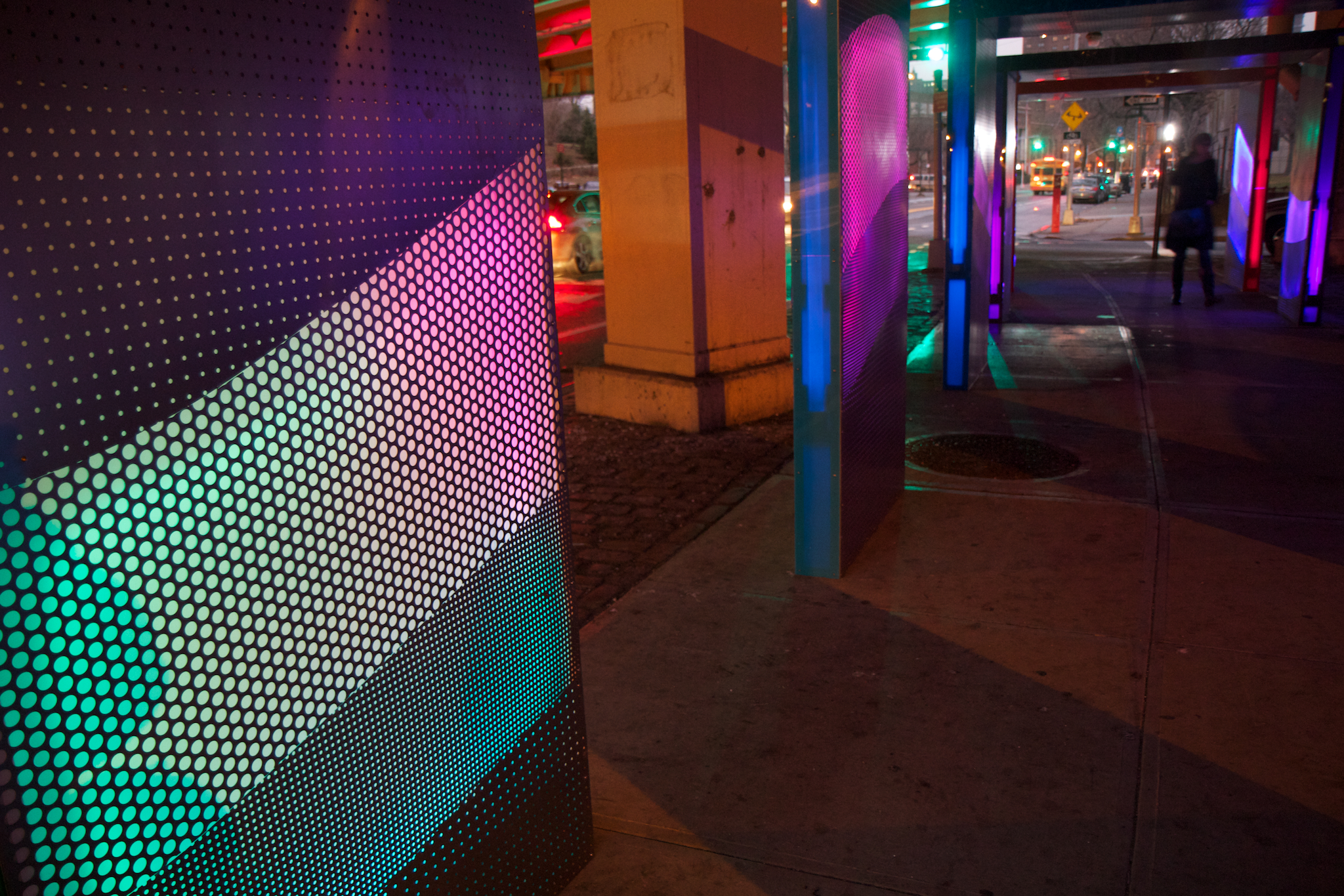 Silent Lights is a series of sculptural gates that line a pedestrian pathway under the Brooklyn Queens Expressway. The gates are embedded with light and sound technology: 2,400 LEDs and a microphone, controlled by an arduino mega microcontroller. The installation uses these to respond to sounds from the street and transform it into beautiful light patterns. The light enhances this ordinary often overlooked public place, creating a playful, inviting, memorable space. It is also an attempt to revitalize some of the city’s millions of underutilized square feet of space under the New York street bridges and expressways.

Our project is an addition to the research work that the Department of Transportation has been conducting with a public space advocacy group called Design for Public Trust. The study is called 'Under the Elevated' and it outlines strategies necessary for the revitalization of the millions of square feet of unused spaces under New York City freeways and bridges. From a very early stage in our design, we focused on the human conditions of the site. At this major intersection are drivers, walkers, cyclists, young people, old people, commuters living in the area and those on their way to work. A great diversity exists and yet no one shows an inclination to slow down, talk or interact with one another. A lack of respect exists for the space of the site as can be seen by the amount of random garbage left on the ground. No one seems particularly comfortable as they cross the dark and isolating site. Our immediate goal was to make the site more hospitable, safer and somehow instill a sense of civic pride into the everyday user.

A driving factor that has remained constant throughout this project has been the conscious decision to collaborate with local agencies as often as possible. Our primary partner is the New York City Department of Transportation. All designs were approved by them and had to meet their technical and safety requirements prior to installation. Through their program New York City pARTners, they gave us the opportunity to design and build this installation. They also prompted our introduction to the staff at Red Hook Initiative and Myrtle Ave Brooklyn Partnership – our local partners for the project. We've made presentations at the community board meeting as well as the local housing project meeting. Brooklyn Arts Council, our fiscal sponsor helped us in much of our fundraising efforts. We were supported by groups focused on civic participation, design and creative place-making like Artplace America, Black Rock Foundation, Awesome Foundation and Designers Lighting Forum of New York. Fabrication and engineering work was handled by local workshops and consultants who were employed directly by the artists by the funds made available by the above stated groups. We utilized local vendors whenever possible to have the greatest impact and make connections in the community.

We hope to utilize Silent Lights as a platform for education. Our plan is to collaborate with some of our partners like the Red Hook Initiative and Designers Lighting Forum of New York to create workshops around the subjects of lighting, design and technology with the local teens that have shown interest in the project. These workshops will be conducted using easy prototyping toolkits and will be taught by the consultants who worked on the project. We are still in the process of planning and will have more to share soon.