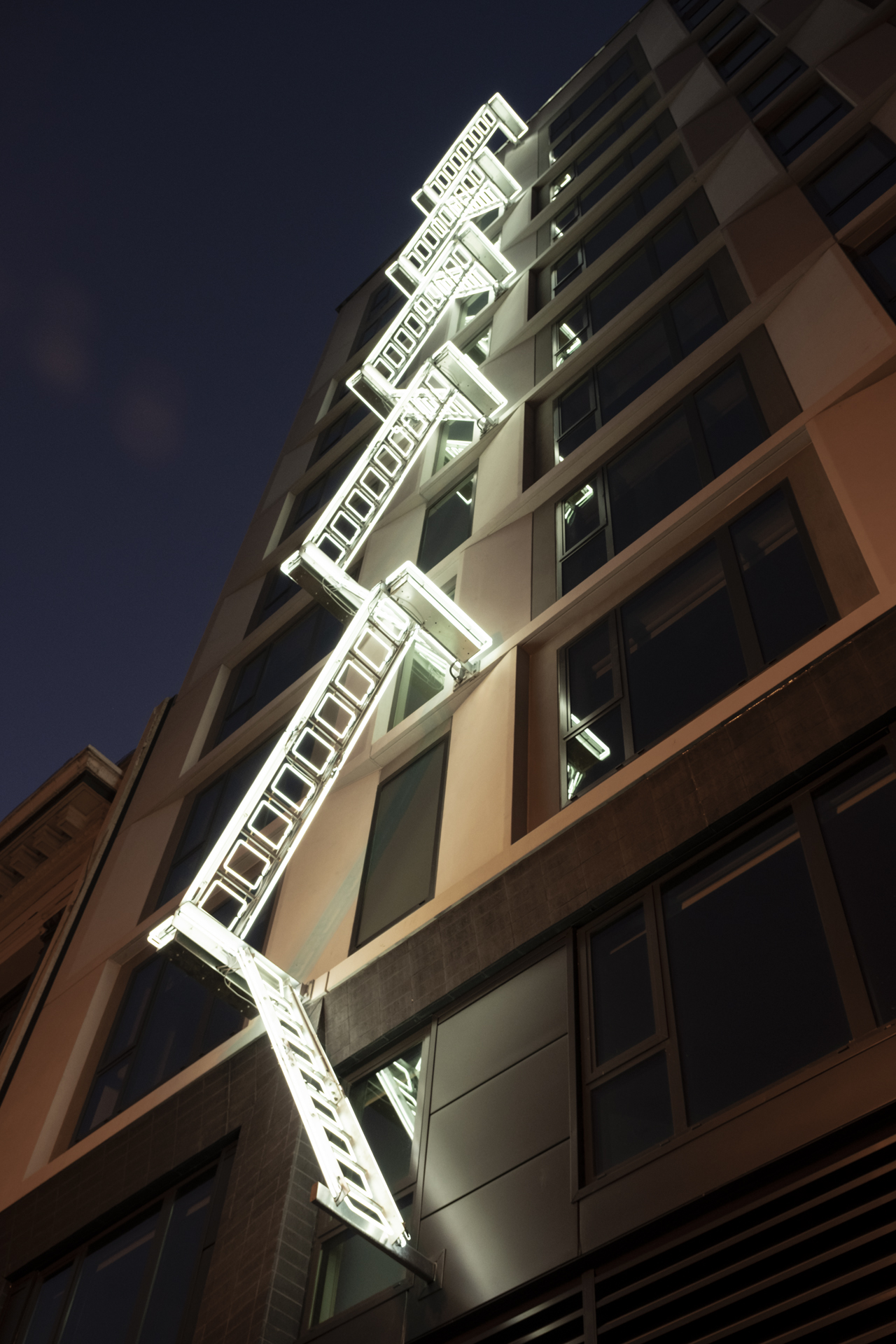 THE LADDER (SUN or MOON), located on the façade of the building’s 12-story tower fronting Market Street, a major thoroughfare in San Francisco, consists of a ten-storied neon and steel ‘ladder,’ resembling a functional fire escape. Looking upwards, a ladder of bright white light disappears skyward, and transports viewers from the traditional urban street life setting to an unexpected experience; a sensation of mystery and transcendence, which distinct to Navarro’s artwork, is also reminiscent of the marquee that adorned the Granada Theater in the 1920’s (later the Paramount Theater), the site upon which 50 Jones now sits. The sculpture is 95′ tall and 10′ wide, and protrudes 4′ from the facade.

“I believe that art must be surreptitiously implanted into the public realm,” says Navarro, “to produce a maximum effect and propel the viewer to question not just the meaning of the single art object, but of the entire lexicon of everyday objects that surround it. THE LADDER should not announce itself as a sculpture, as an object divorced from and yet imposed upon its context. On the contrary, I envisioned an artwork that infiltrates the public space by proposing to ‘naturally inhabit’ its environment.”

The client sought to commission one original and prominent artwork to be integrated into the building's façade. The goal was to commission an ambitious and engaging artwork of high aesthetic quality that would draw favorable attention to the building. Utilizing the prominent Market Street façade as a canvas, this project offered the artist an opportunity to create a three dimensional light based artwork that provides an uplifting and transformative experience between the artwork, the building and the viewer.

“THE LADDER is a work that reflects the history and the future of Market Street,” says Meg Spriggs, Managing Director of Shorenstein’s Multifamily Investments Group, “giving Mid-Market a renewed place of pride in San Francisco’s consciousness and providing a remarkable entry into our building and retail.”

The client hired Keehn On Art (KOA) several years before breaking ground on the project. This allowed KOA to commission the artist with ample time to collaborate with the architects and client on integrating the artwork into the building's facade. Both the client and the architects were so enamored by the artwork that they agreed to shift the window locations on the facade, as well as put in fake windows behind the artwork, to address any potential light bleed issues as well as to make the artwork look more realistic. The artist worked hand in hand with the architects and construction team on the artwork attachments and electrical so that this work is seamless and there are no issues with items such as the building's waterproof membrane or window washing system.

“THE LADDER now represents one of the great visual attractions along Market Street,” notes Dorka Keehn, project public art consultant. “Navarro’s art adheres to a language of minimalist construction based on geometry and repetition, but produces a sense of ethereal sublime as the illuminated form ascends toward the sky. The form is simple and essential, yet the result is radiant and spectacular. Through Navarro’s creation, the neon ladder becomes a purely poetic object, a repetition of form whose ordinary identity is now accentuated.” THE LADDER (SUN or MOON) subtly penetrates both the public space and the public imagination, by merging familiar visual languages iconic to urban architecture in the United States, whose structures adorn facades, but whose functions are long buried beneath their nostalgic beauty. The charged combination of these two forms, provokes a conceptual and material dislocation that is the essence of artistic subversion.