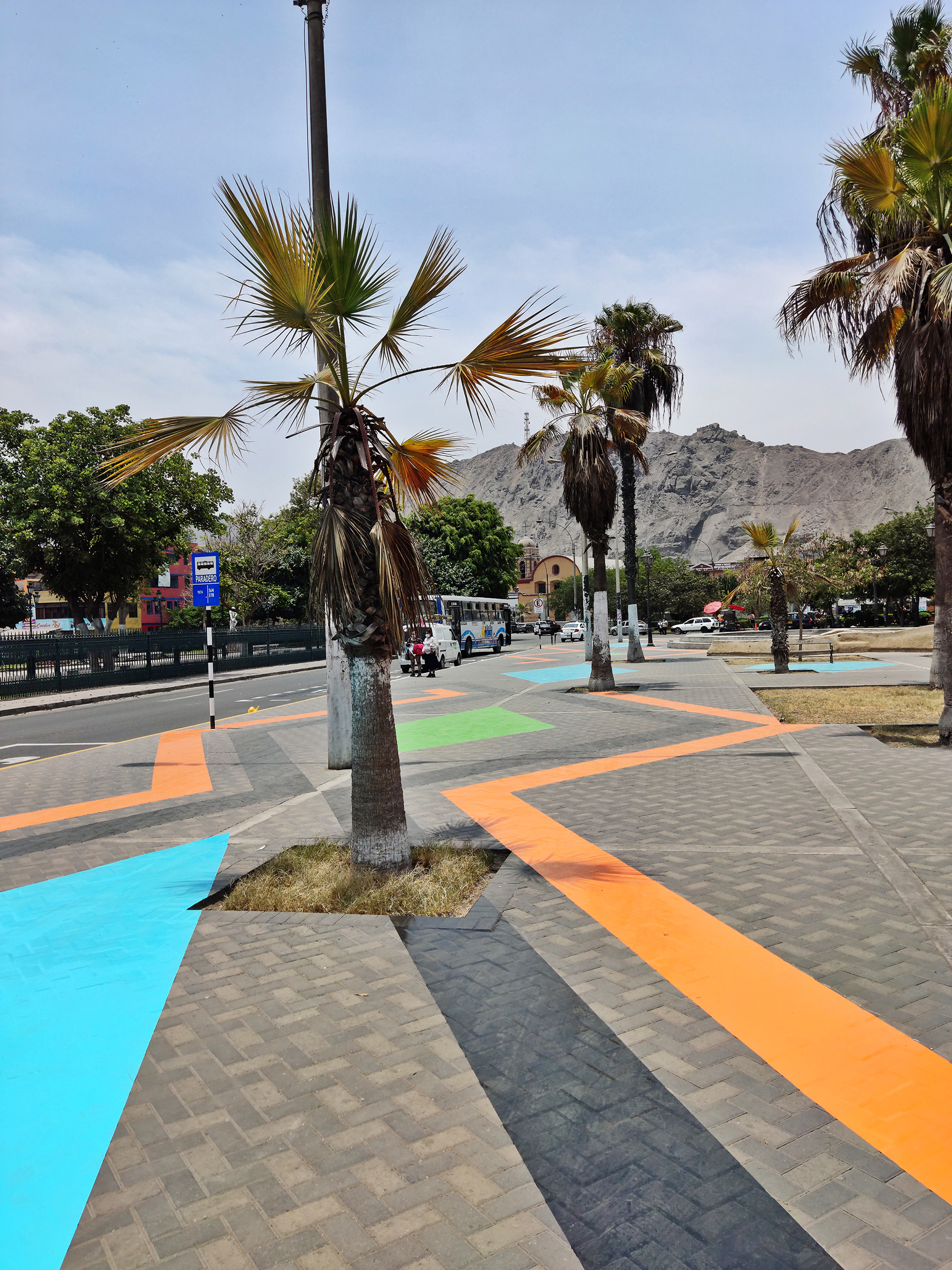 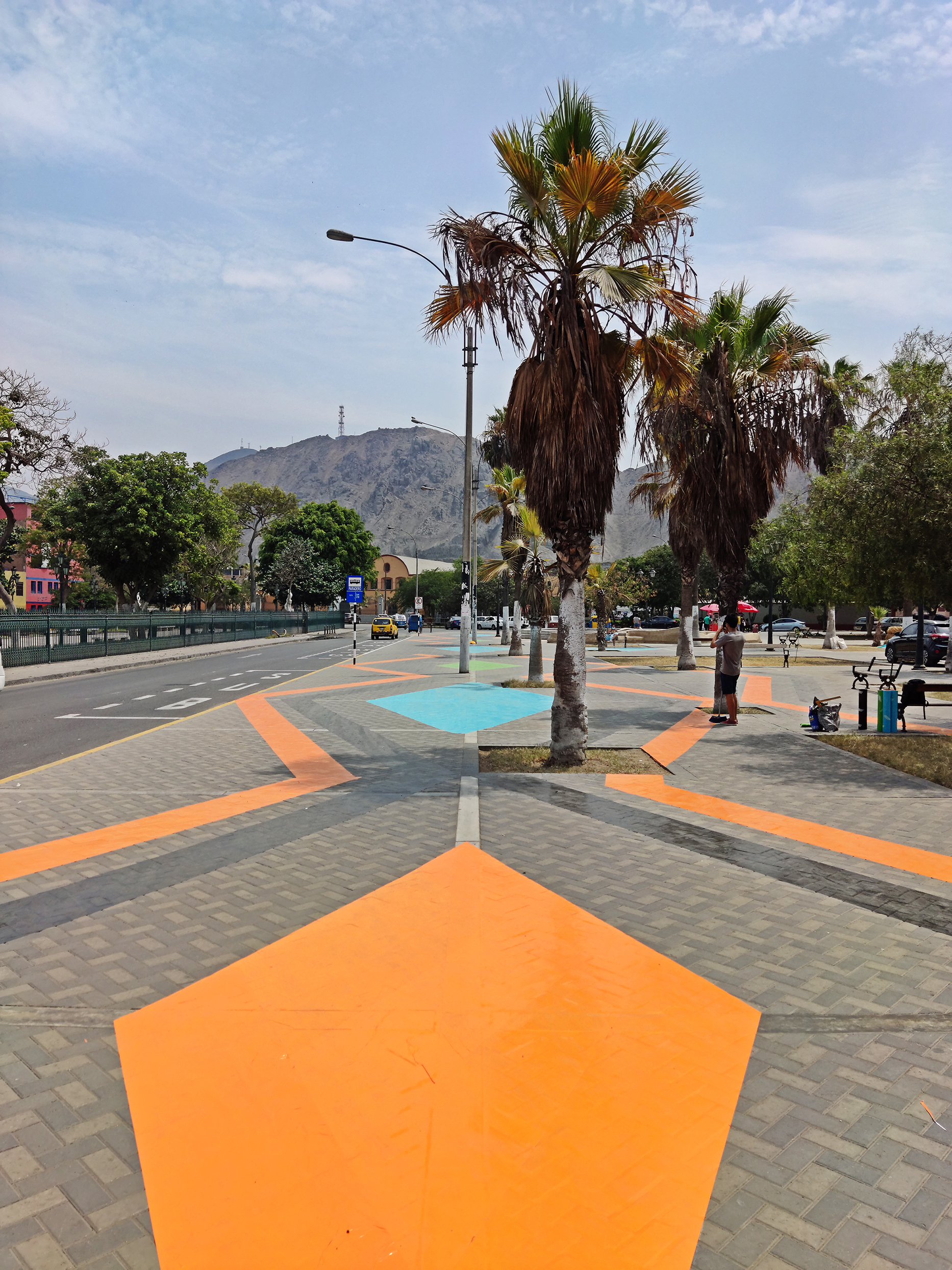 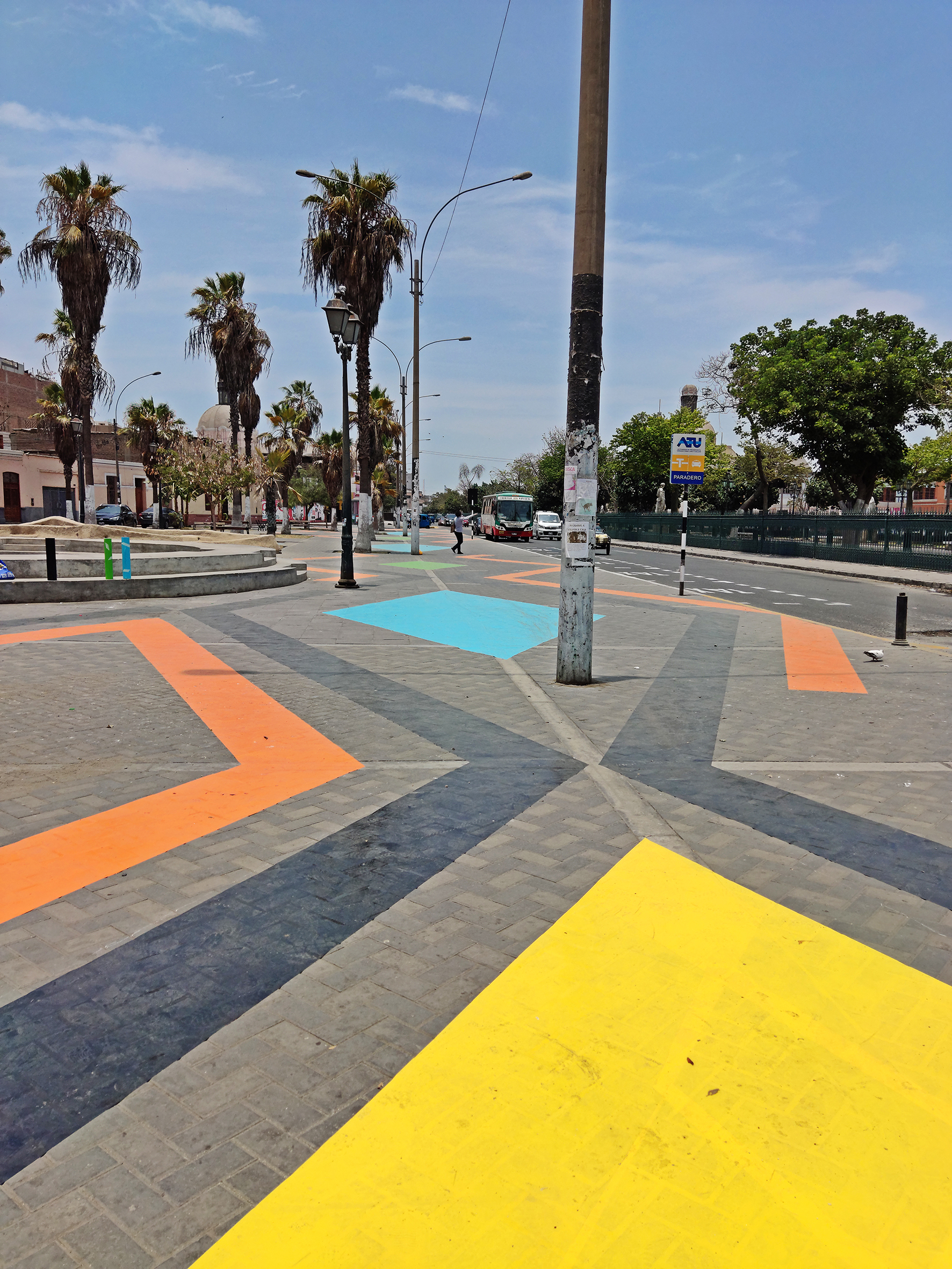 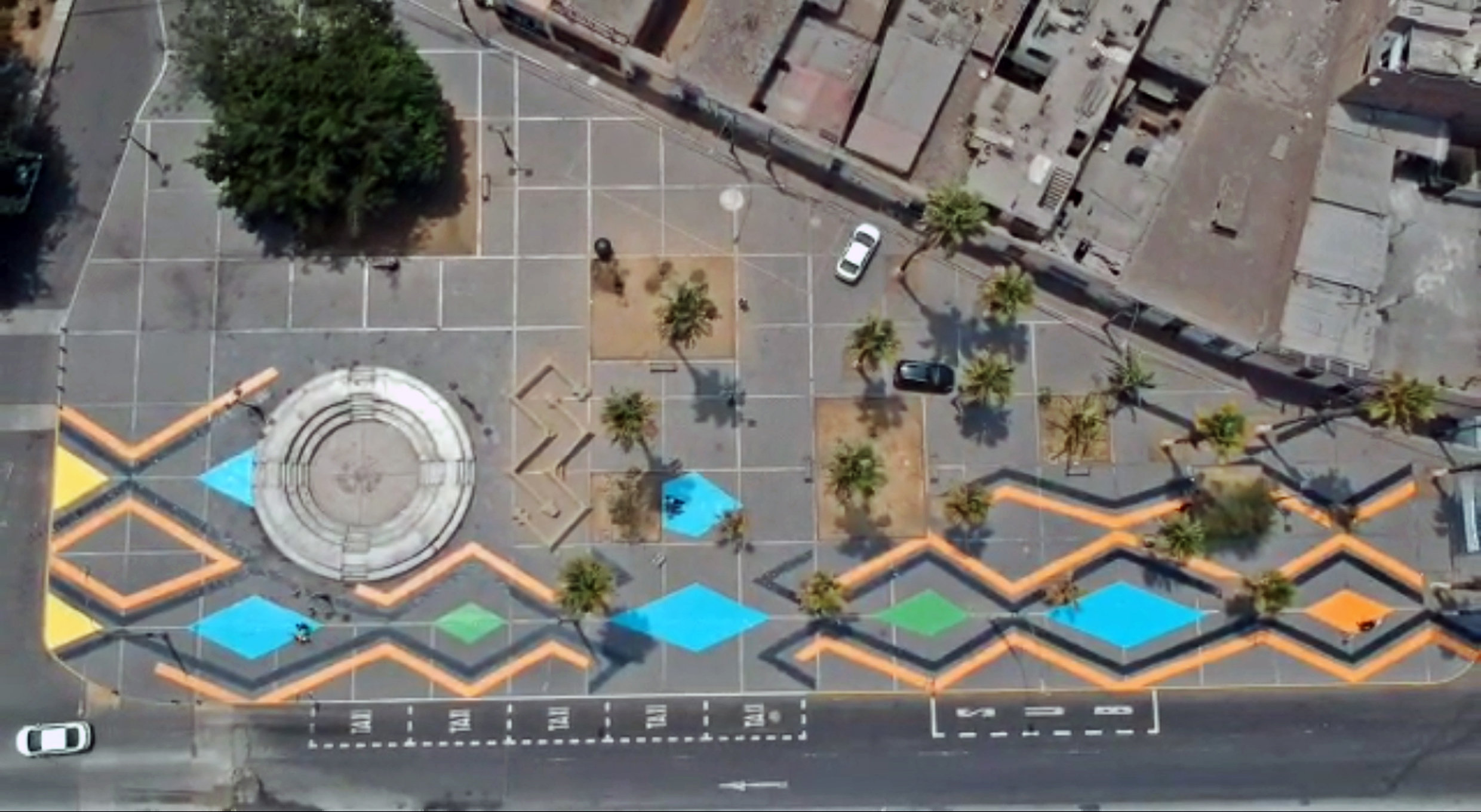 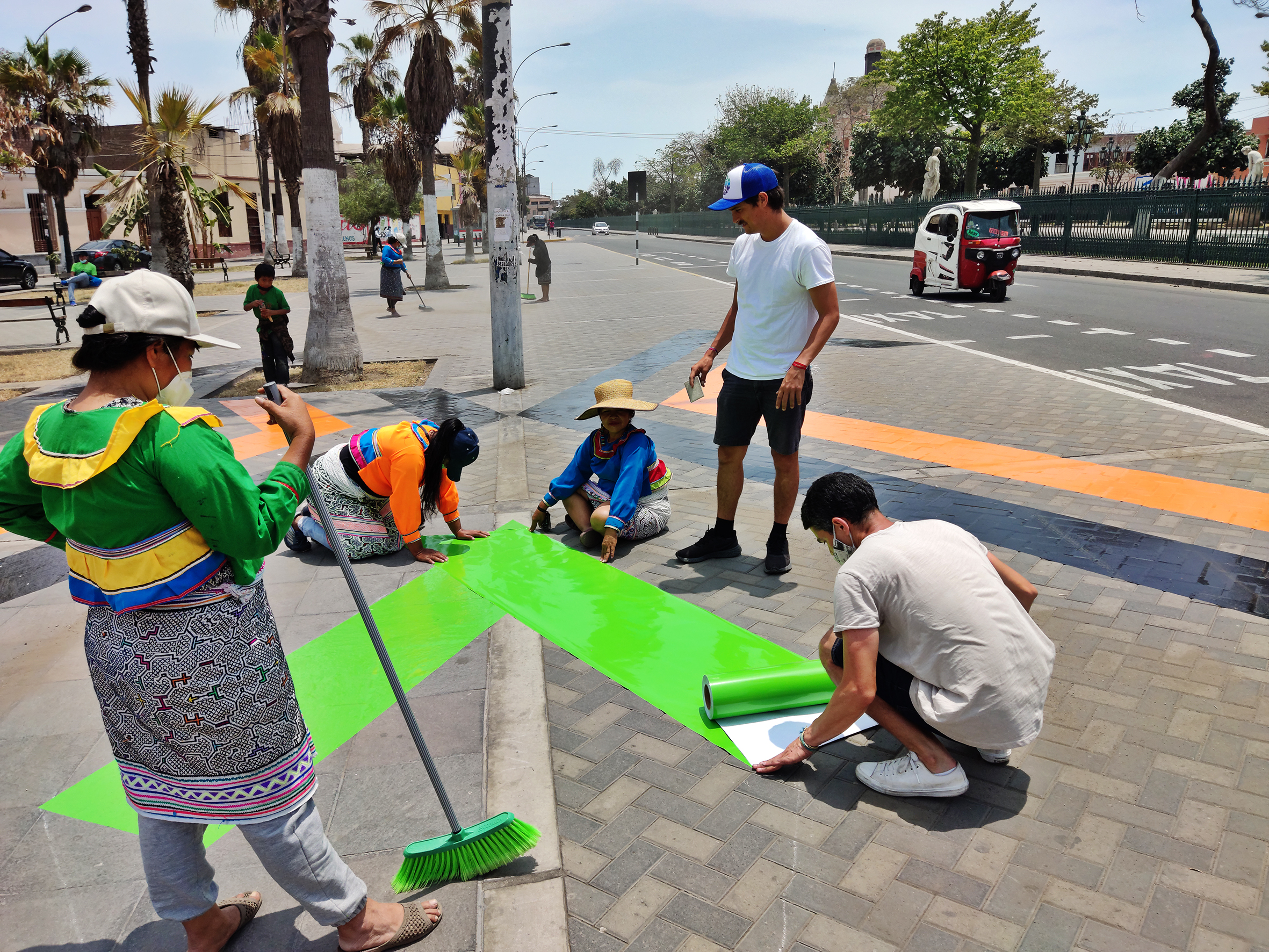 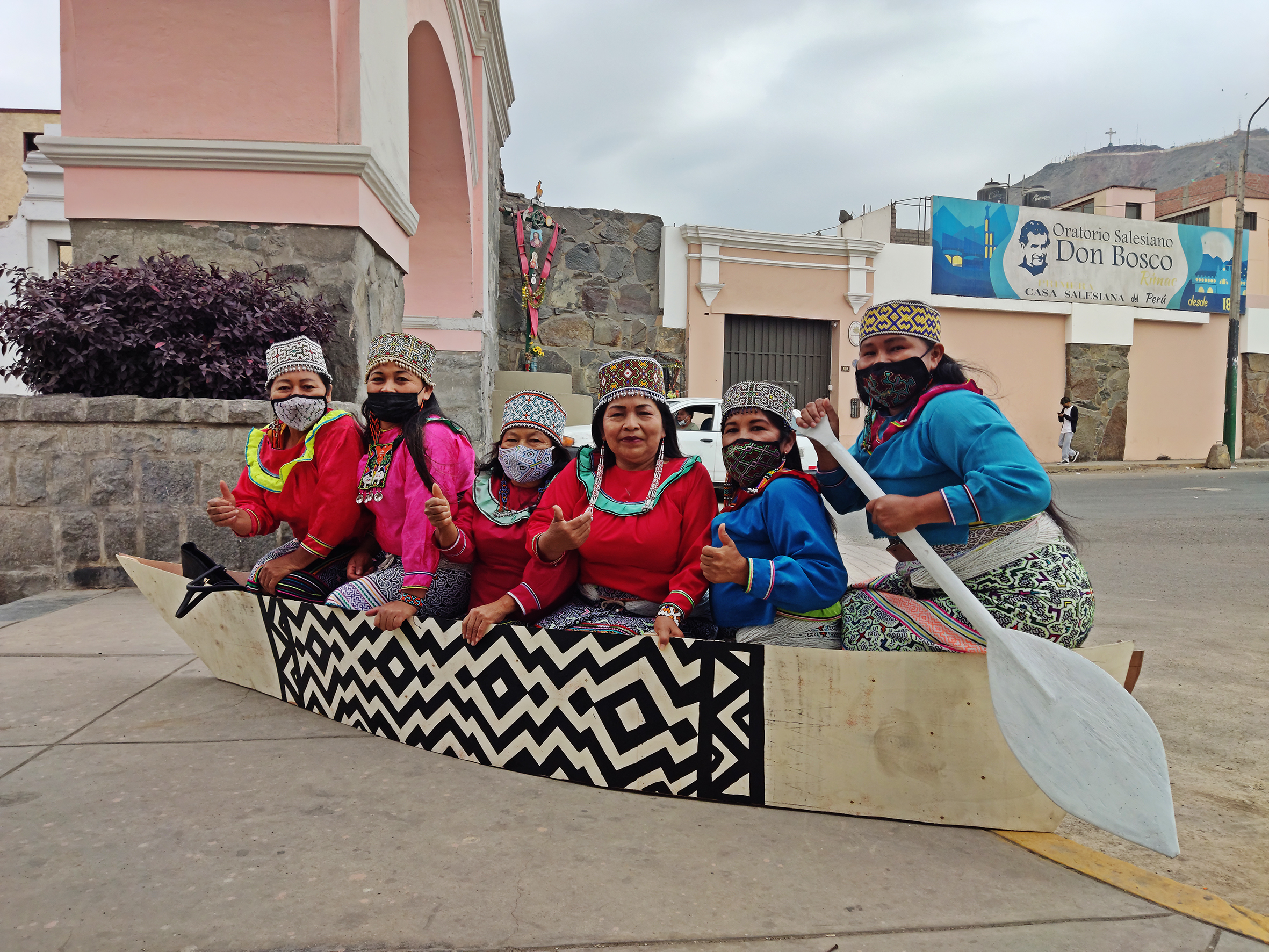 This project is part of Espacios Revelados Lima. This public space intervention project took place in Plazuela Revolver to make visible the existing cultural diversity in Rimac, a district located in the city of Lima, Peru, through motifs typical of the Shipibo-Konibo community. Using a design called “KENÉ”, we represent the journey of this Shipibo-Konibo community from its place of origin, the Amazon jungle, to the capital Lima. We also make a parallel between the Shipibo-Konibo interpretation on the stars and constellations in front of a series of zodiac themed sculptures arranged in the Alameda de los Descalzos, a historic place remodeled in the 19th century with these images that represent the development and progress of the Republic Peruvian of those times.
The material used for this intervention was vinyl, since it was necessary not to damage the area because of its historic value. The intervention spans across 90 meters long by 25 meters wide. Plaza Revolver is located near a neighborhood of Rímac that is known for insecurity and crime, with this intervention we intent to reactivated this space as a cultural point and as a place of gathering and dialogue for the neighbours and passers-by

Kené art has many representations and messages and the one we chose for this intervention synthesizes the path or journey, the stars and the moon, all of this was part of the discourse that we had in our project. The next step was to adapt these forms to the existing layout of Plaza Revolver, taking into account trees, benches, etc.
Due to the fact that this space is public heritage, we chose to place vinyl because it´s a material that would not affect the surfaces where it would be applied and also presented the range of colors that we needed for the design.

I partnered with Shipibas Muralistas Collective for the development of this project, due to my experience as a visual artist making interventions in public space.
The Shipibas Muralistas Collective is made up of a group of seven female artists and an anthropologist who work together as a team to paint murals across the city.
For this project, we held a series of meetings with ESPACIOS REVELADOS LIMA team for the conceptual adjustment of the proposal and the management of permits with authorities.
Together with the collective, we created the work from sketches, personal workshops, a compilation of images, ideas, and the exploration of new alternative materials, different from those that the collective usually use in its interventions. The result of all this prompted the application of a material not used before by the group, overcoming logistical and aesthetic barriers in the process. The final work is one of the largest interventions carried out by the group, which leaves us with a satisfactory result for both the team of artists, as well as for the inhabitants of the area who have benefited directly or indirectly from the proposal.

This intervention was complemented with a performative act carried out by the women of the Shipibas Muralists Collective, they made a canoe or NUNTI, so called in their native language, to invite the attendees of the artistic tour to symbolically recreate the trip that they made from their place of origin, the jungle; to the capital Lima. Making a similarity to what their new place of origin represents today, the Cantagallo community (jungle) and the Alameda de los Descalzos area (Lima), both located in Rímac.