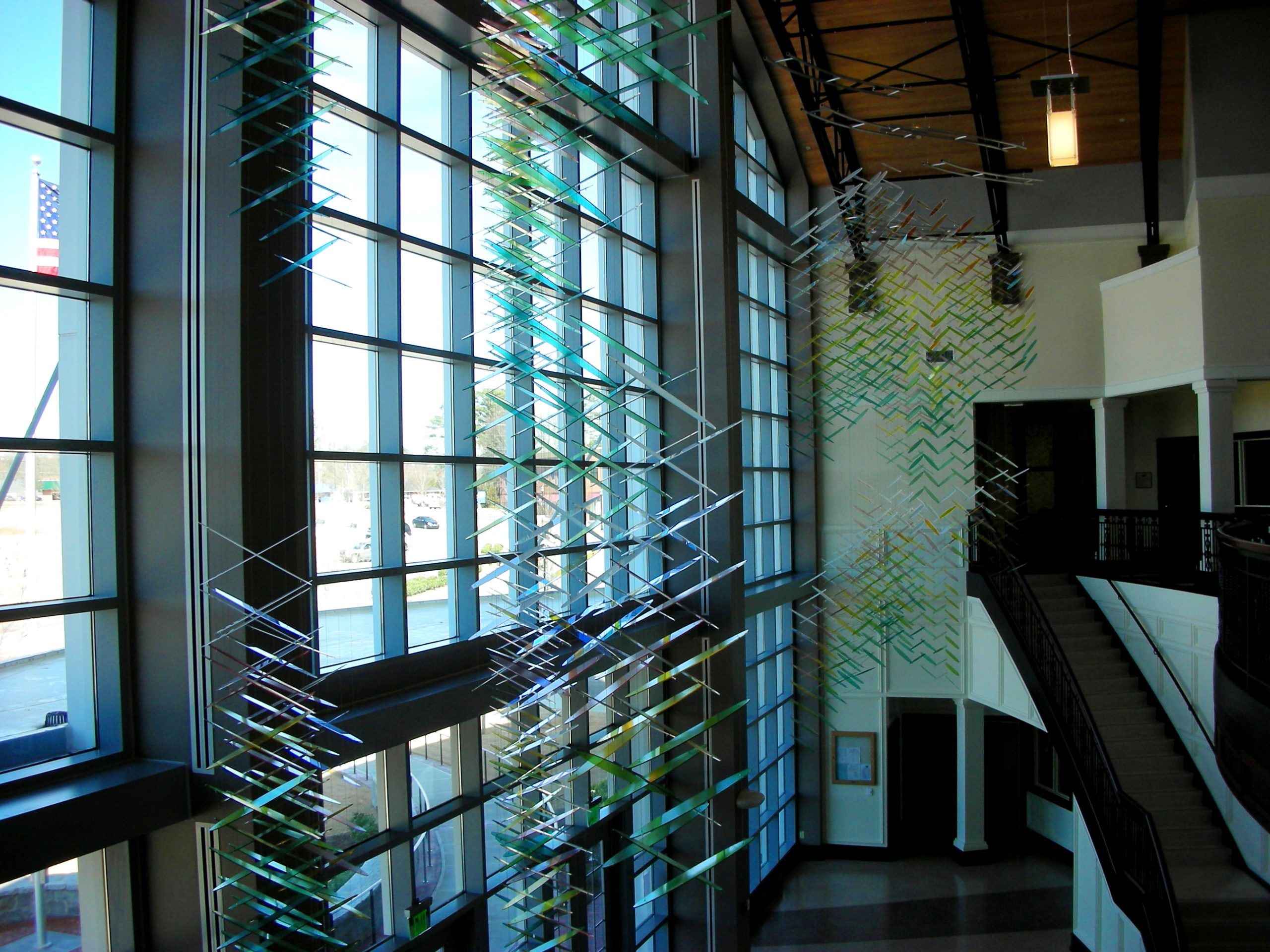 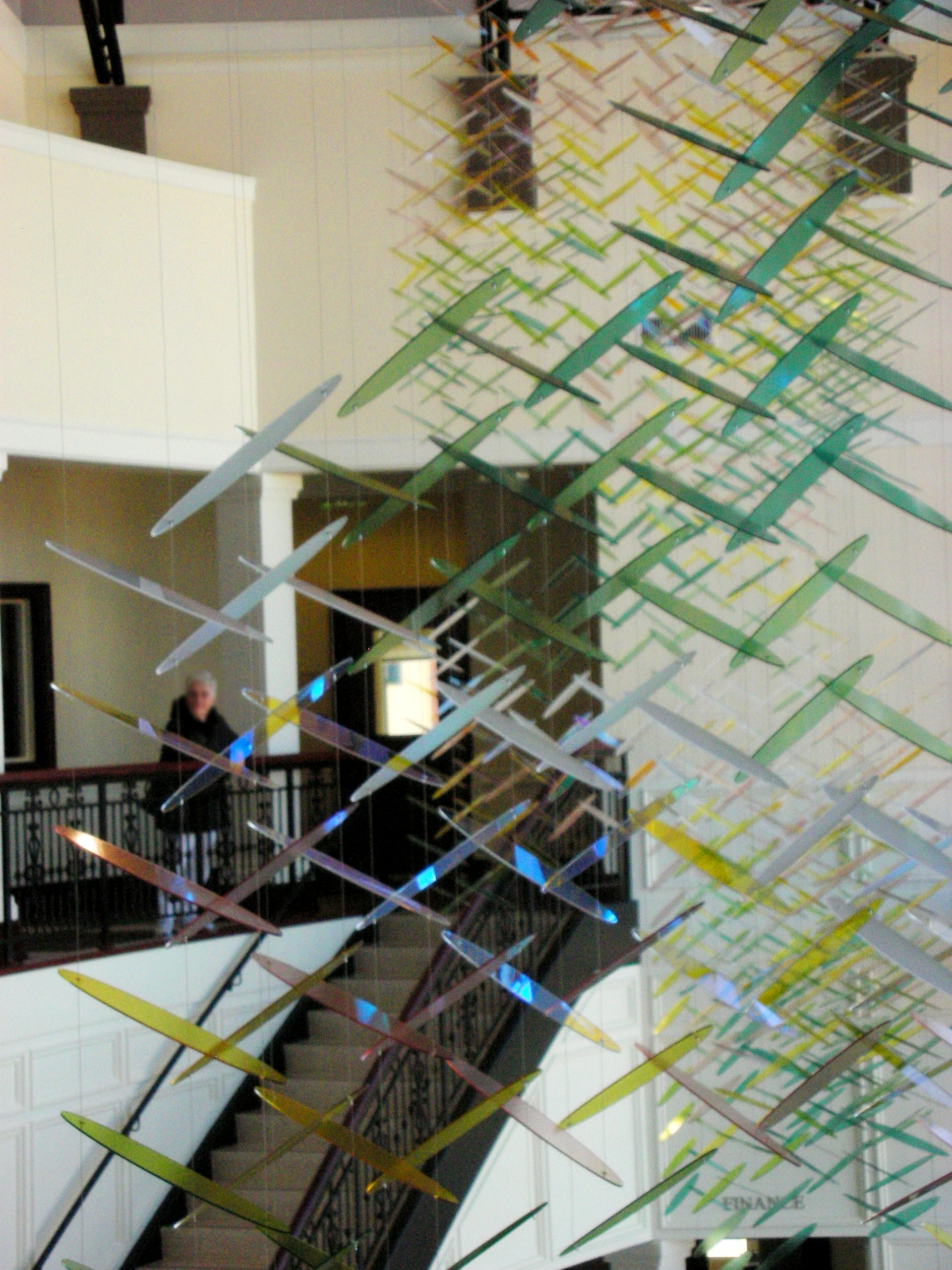 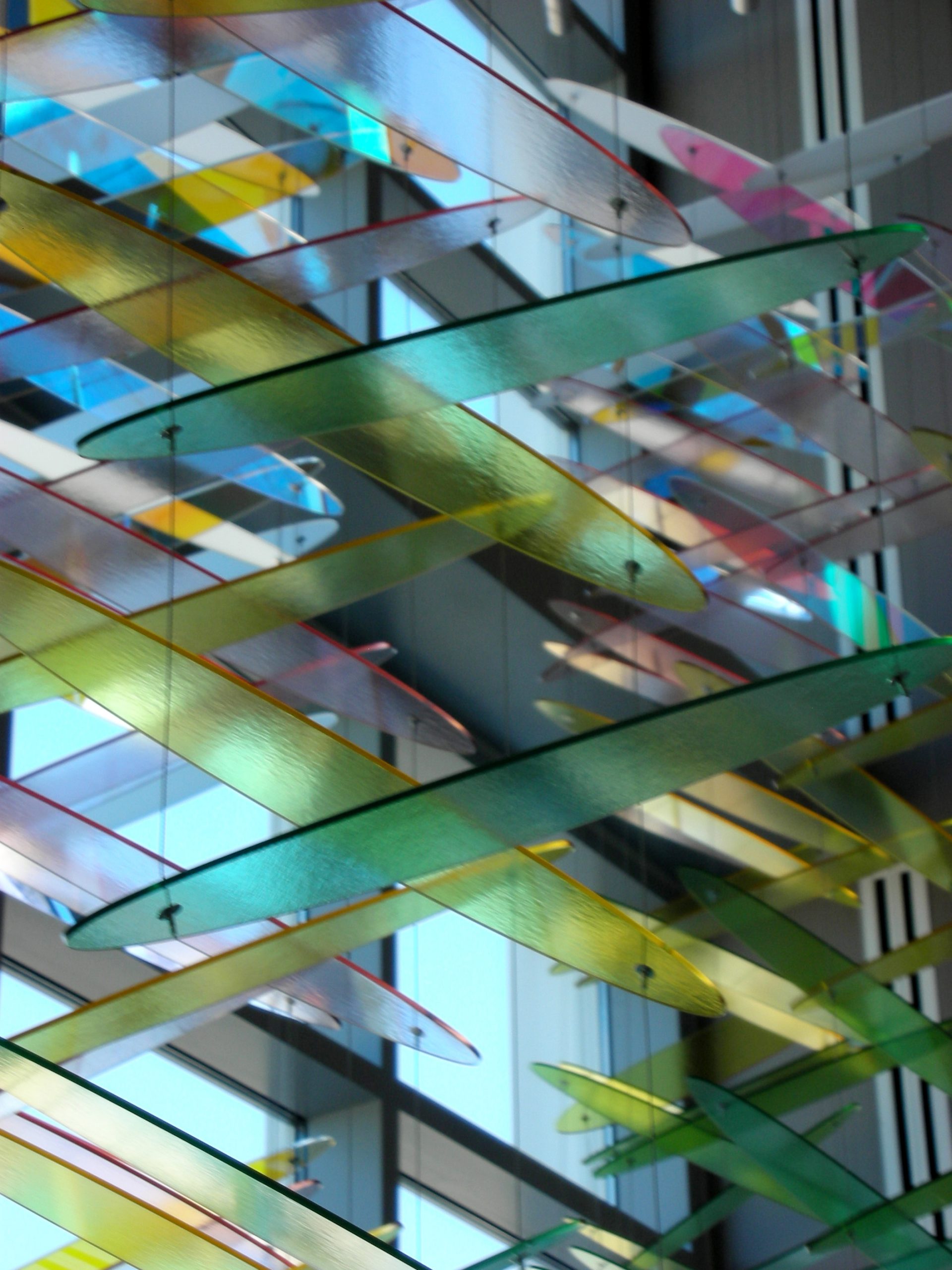 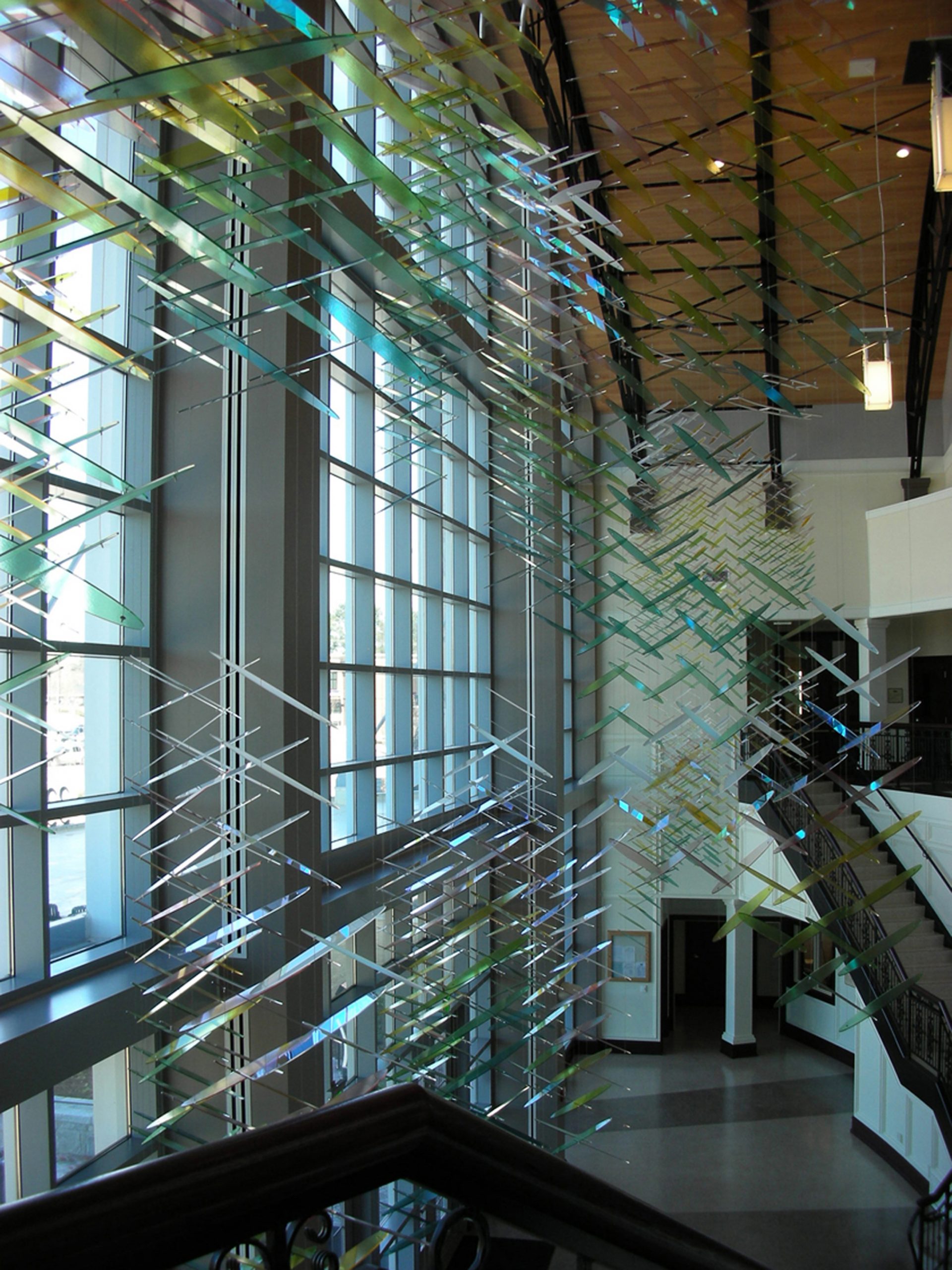 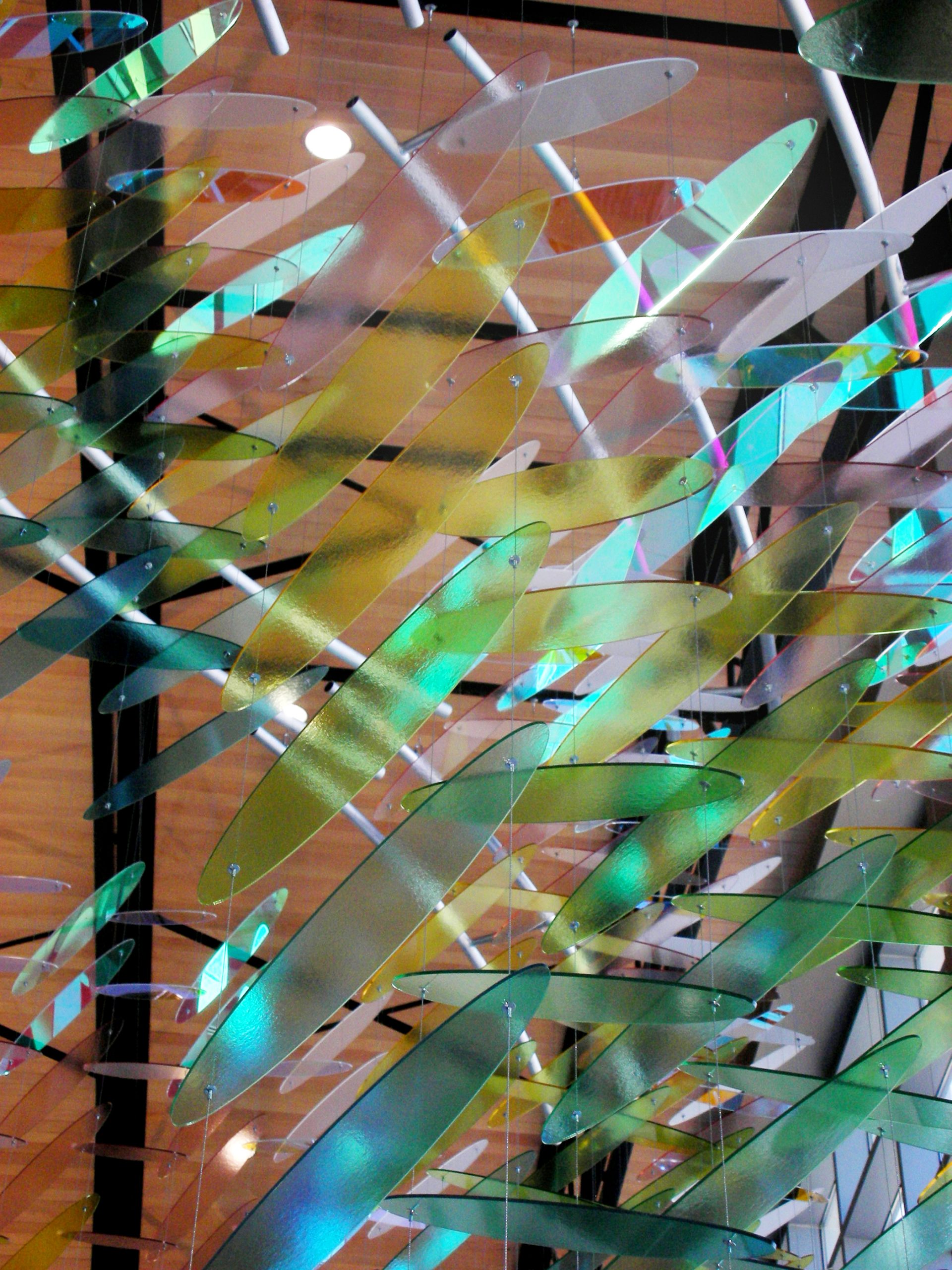 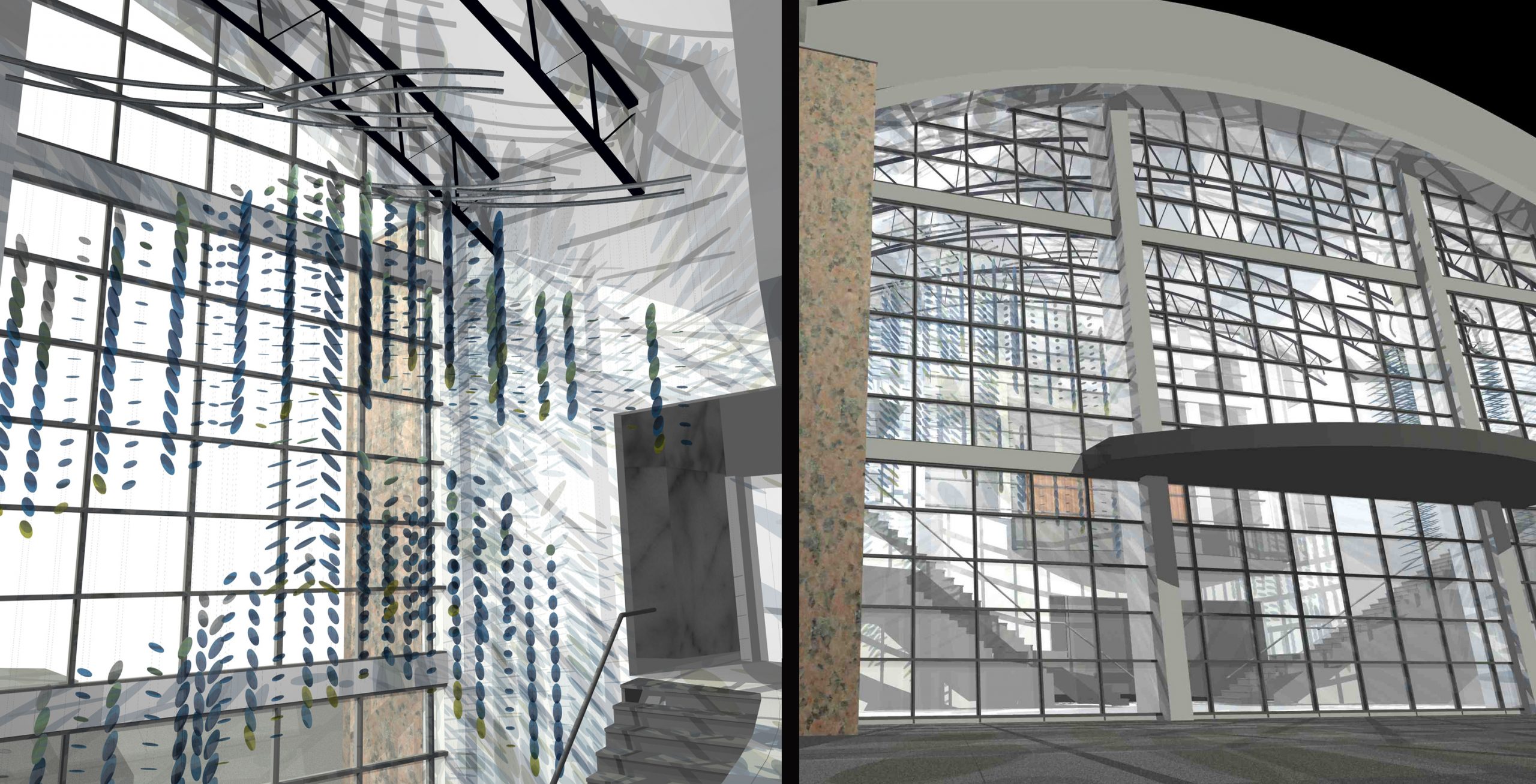 Two suspended sets of sculpture set in the large atrium open structure of the new Suwanee City Hall. I used 3-Form eco-resin (recycled PETG), recycled aluminum frame structures, radiant acrylic all suspended from s.s. cable form the 'water color' like chandelier elliptical elements. The project was first designed and engineered on computers where the open 'negative' spaces became as important as the structural layers of colors. This allowed the project to have a 'lacy' visual component allowing the staff, from the second floor, to openly view the park across the plaza entry.

The Suwanee City Hall ‘Shimmering Echoes’ uses sustainable colored eco-resin layered in multiple strings of ellipses to emulate ‘watercolors’ in the sky and support the park like setting, across the street from this facility. This installation utilizes the relationship of the natural ambient lighting and the environment creating a new vision and experience for the viewer at many different levels and focal points. In the evening the two suspended sculptures are back-lit and can be seen from the street through the large open clear-story entry – giving the city hall a public presence for a growing and dynamic community. Technically the project was designed to retrofit an existing space by designing with the repeating elliptical elements as cascading layers on stainless steel cable and aluminum frames, where the point loads were under 15# at each ceiling attachment. This allowed us to leave the architecture intact and install from simple cross bracing from one truss to another, all of which visually complimented the structural ceiling system designed by the architects. The installation is set in a regional architectural style with roots in Southern Historical language, yet the piece is contemporary and adds to the open nature of the 3-story atrium.

This is the first Public Arts Commission for the City of Suwanee, which is a well-managed and prosperous community with a large percentage of citizen stake-holdership supporting a comprehensive community standard for their success. This project allowed for a large and open public discourse for its legitimacy and formed a language for continued public education opening the way for more acceptance of the Public Art Process. Because of the support and success of 'Shimmering Echoes' the city has produced several more public arts projects and developed a yearly 'sculpture in the park' national exhibition which is very popular and well accepted by the community with national recognition. The Arts Commission made sure that there was a system for full dialogue and communication, making the process of developing this unique solution for the space a very seamless process for my ideas. I wanted the project to be as visually simple as possible, yet retain the elegance of the translucent cascading colors, which constantly change during the day and night from the ambient lighting sources. All of the elements in this project are made of recycled base materials adding an educational component to this installation.

This project, as simple as it is, changes so dramatically depending of the various view points for the viewer. Sometimes dense and clustered, other times open and 'lacy'. When the City had their dedication for this project, the whole group of people who attended came to the lobby, late in the evening, and all lied down on the lobby floor to look up into the sculpture, which was also lit for night time viewing. Best dedication I have ever had!