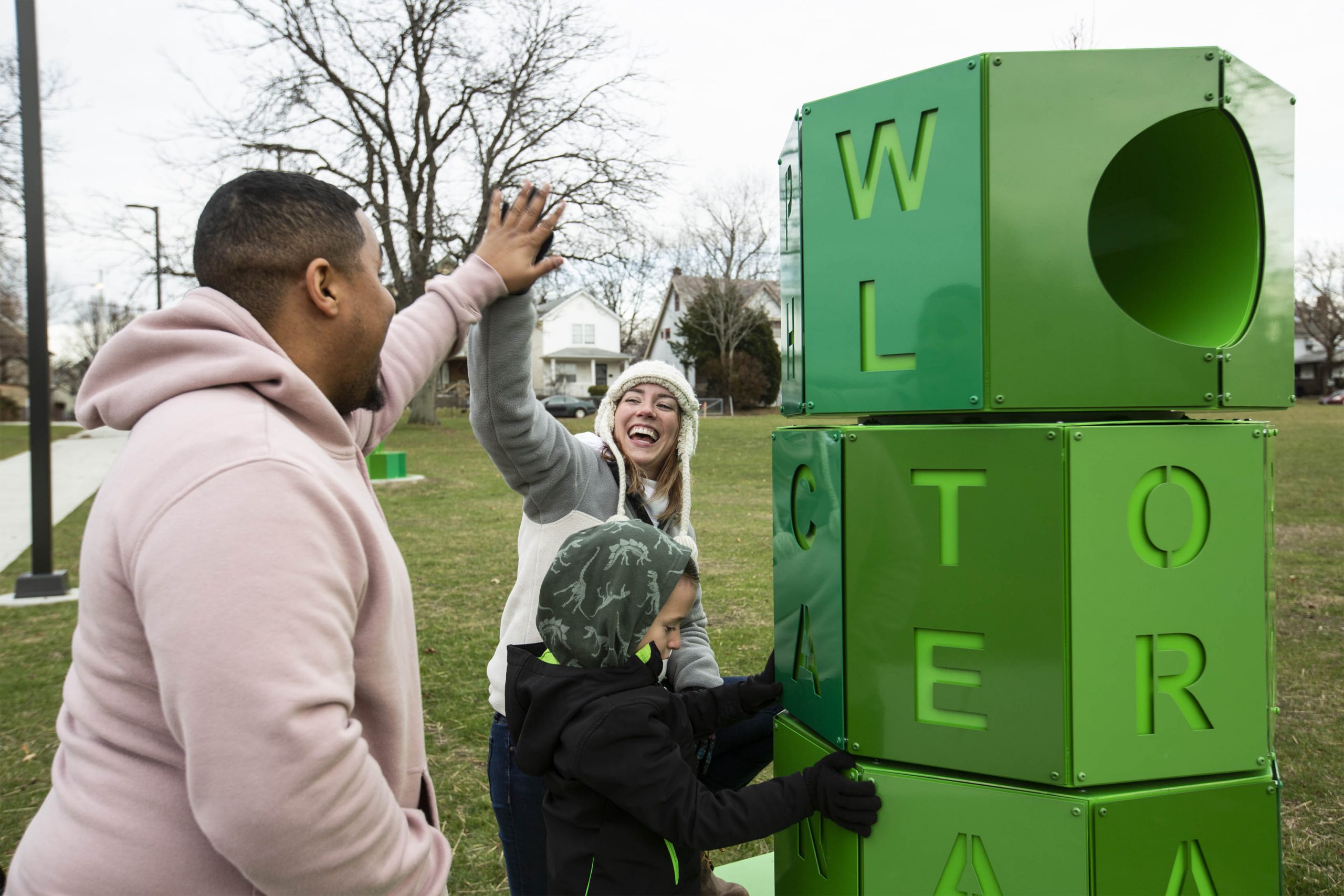 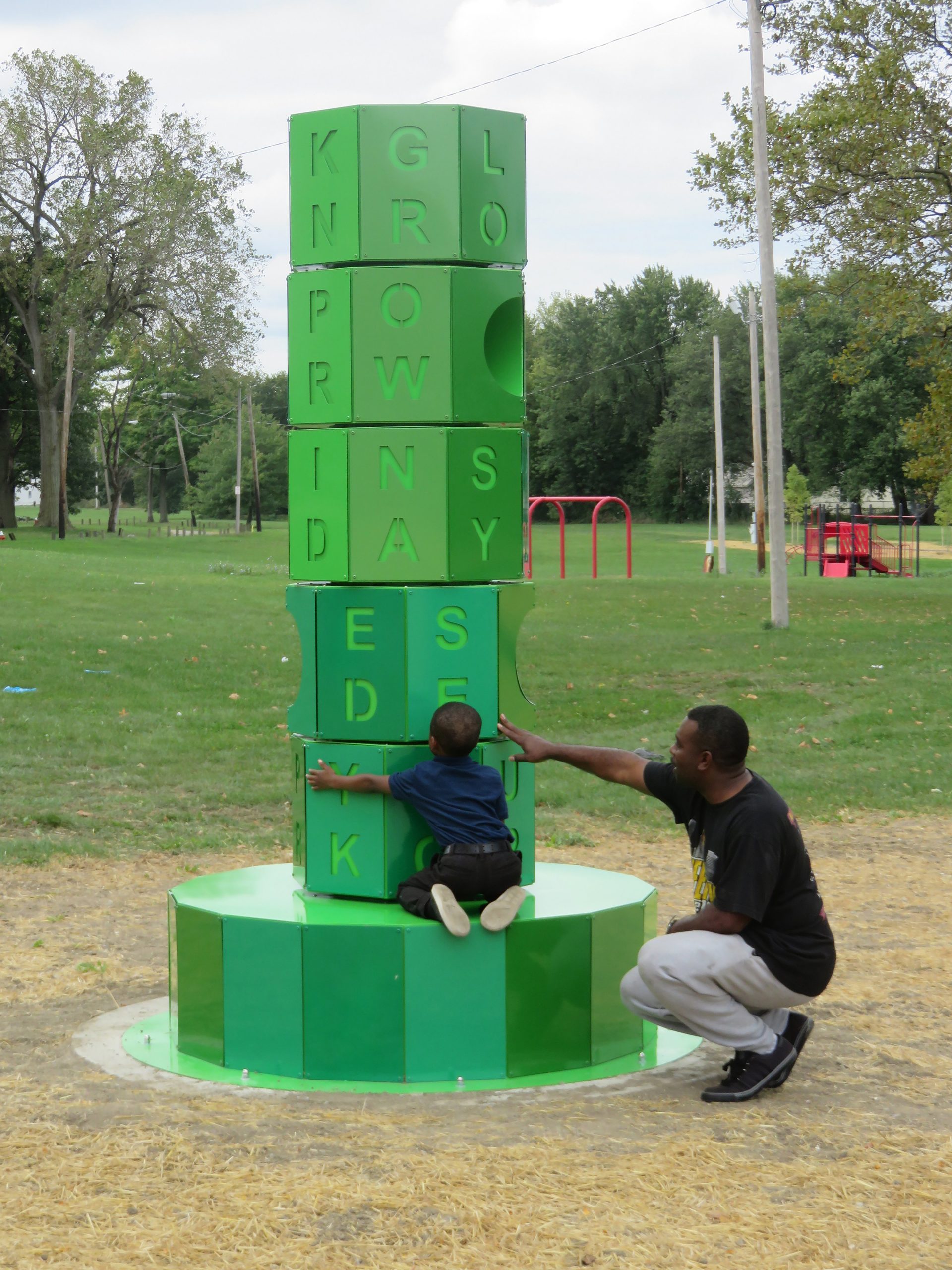 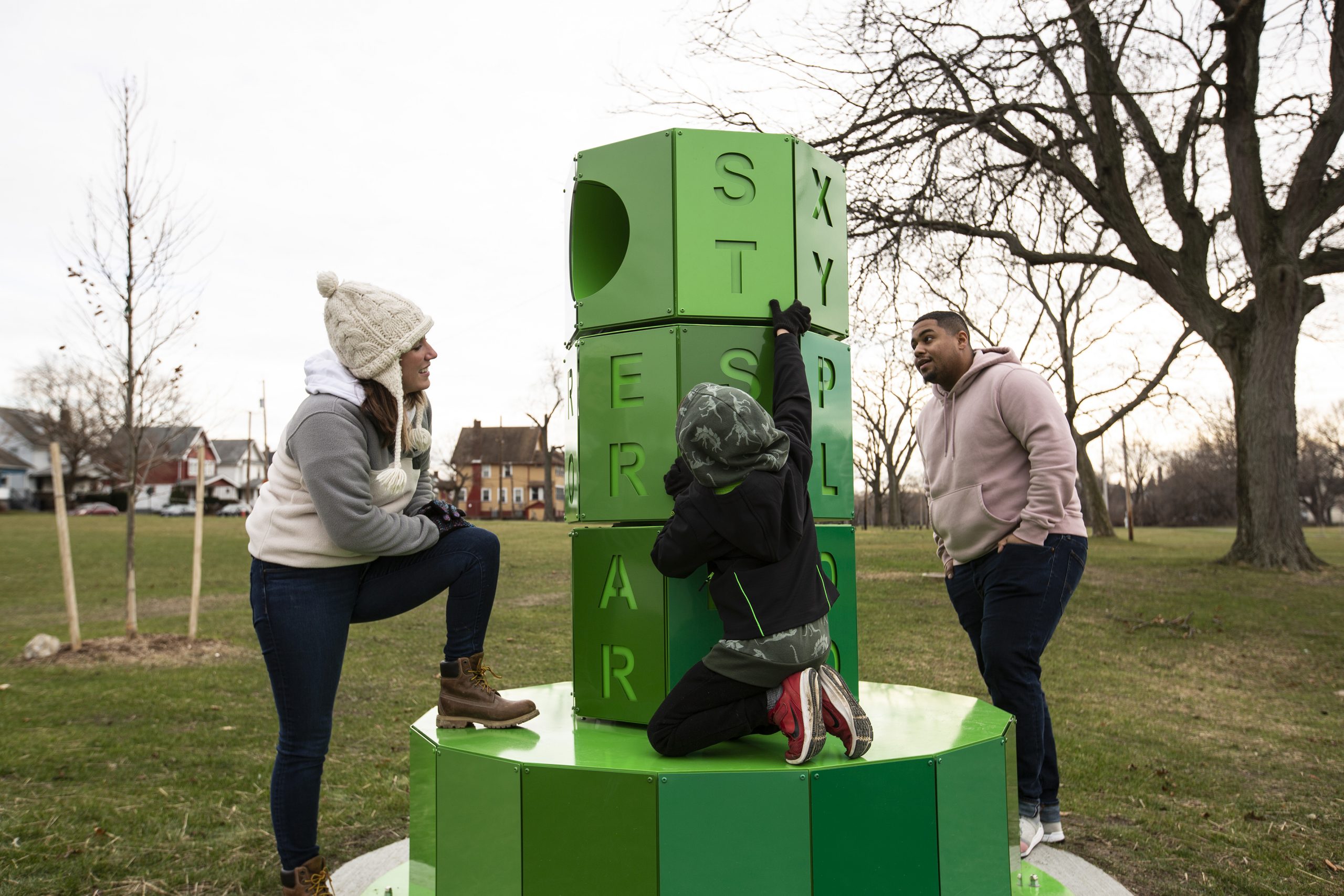 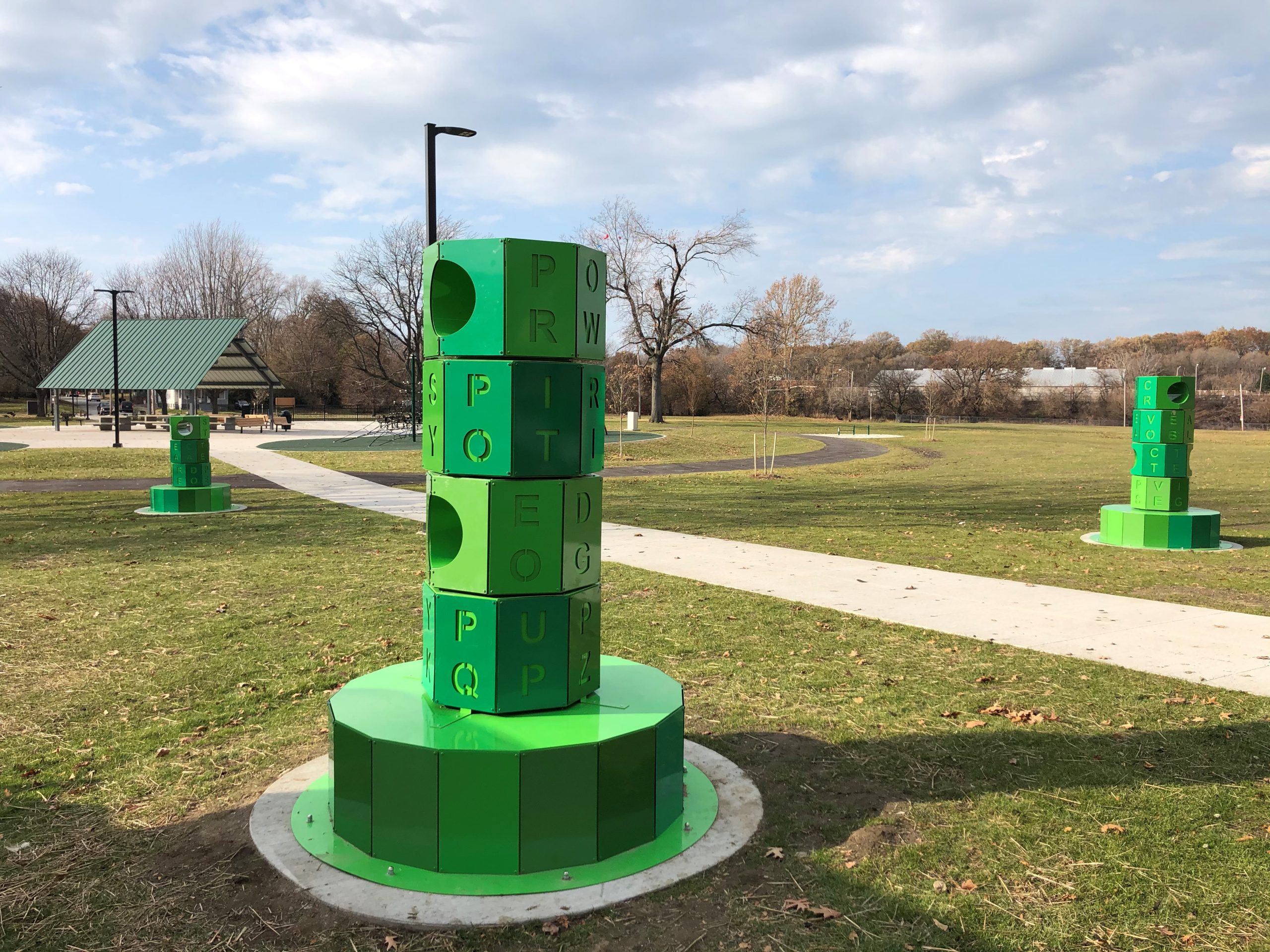 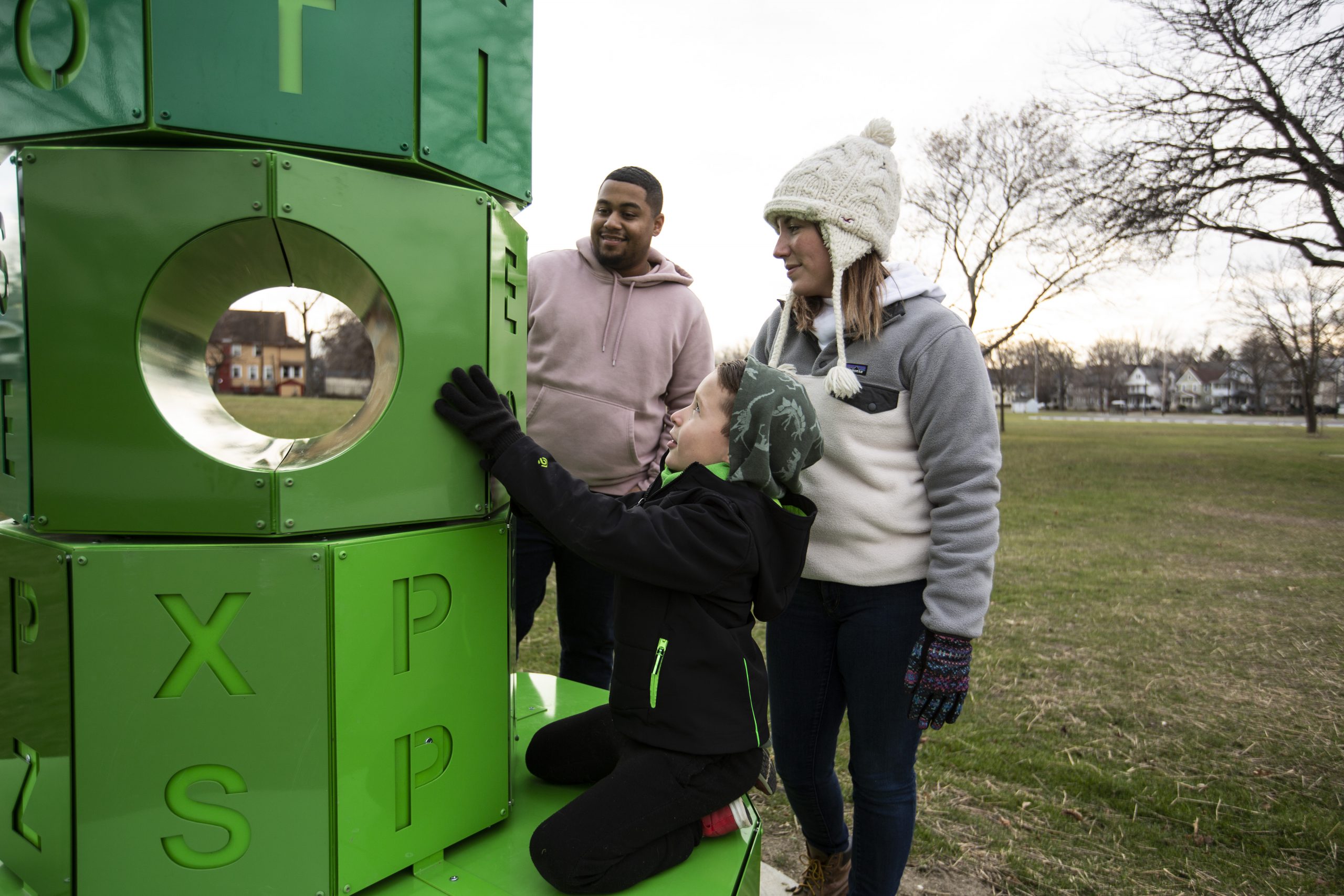 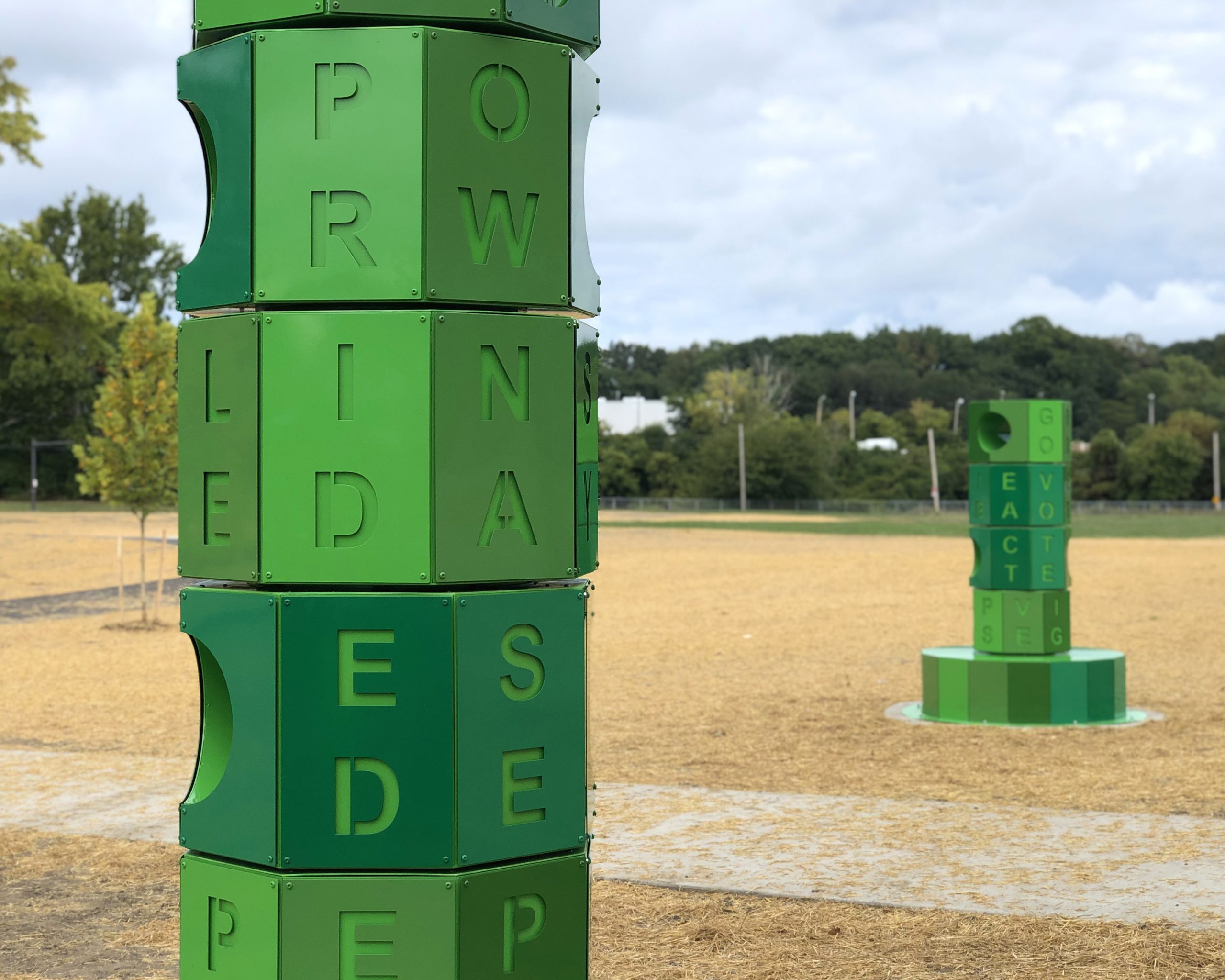 Shifting Totems was created as a neighborhood landmark, sparking a moment of pride, empowerment, and inspiration within the Glenville community in Cleveland, OH. The piece was designed with the local community to become a positive identity for the neighborhood that would spark conversations about the area’s past, present, and future. The piece consists of three aluminum totems growing up from the ground and creating a connection between the two local neighborhoods. The form and green color of the pieces represent growth and create a relationship to the park’s surrounding natural context. The units begin to taper down in height from 9’ to 6’ as they guide one down towards the park’s center. As one walks up to the pieces, they notice that they can rotate the totems’ units to create different words. The words were chosen by the community and meant to spark conversation and discussion. Some of the words that can be created include vote, knowledge, power, strong, and more. There are also holes cut into the totems to allow users to frame different areas of the neighborhood. At the base of each totem is seating that provides an opportunity for people to converse about the messages left behind.

Glenville is a community that has dealt with a lot of adversity and inequity throughout its past and also present times. It’s an area often misrepresented and falsely identified and the community wanted a piece of art that would begin to change the narrative and empower and showcase a more positive identity of the neighborhood. Shifting Totems was designed to become an ever-changing landmark that would use playful interactions to spark open conversation around words of inspiration and empowerment. The work becomes an opportunity for residents and visitors to stop and engage not only with the work but with each other through creating spontaneous moments of teaching, learning, and listening. The artwork becomes a tool for a more extensive discussion about the area’s misrepresentation.

The piece was designed in collaboration with the Glenville community through a series of participatory design workshops to make sure the work became a moment that the community would be proud of and could call their own. Artwork is often seen as the first sign of gentrification within neighborhoods like Glenville, which contain a majority-minority population that struggles with inequity. So, with creating this art piece, it was vital to make sure the community was the main driver in the process of designing the work. Within these participatory design workshops, The Urban Conga worked with community members and stakeholders to figure out what this piece would be and represent for the neighborhoods the work was being placed in. Throughout this process, the community discussed creating an element that empowered the area's residents and sparked conversations about the neighborhood's past, present, and future. Every component of "Shifting Totems" came from the community members' voices at these workshops as well as through spontaneous conversations with local residents around the park. Through this process, the work became an inclusive playable platform the community was proud of and could call their own.