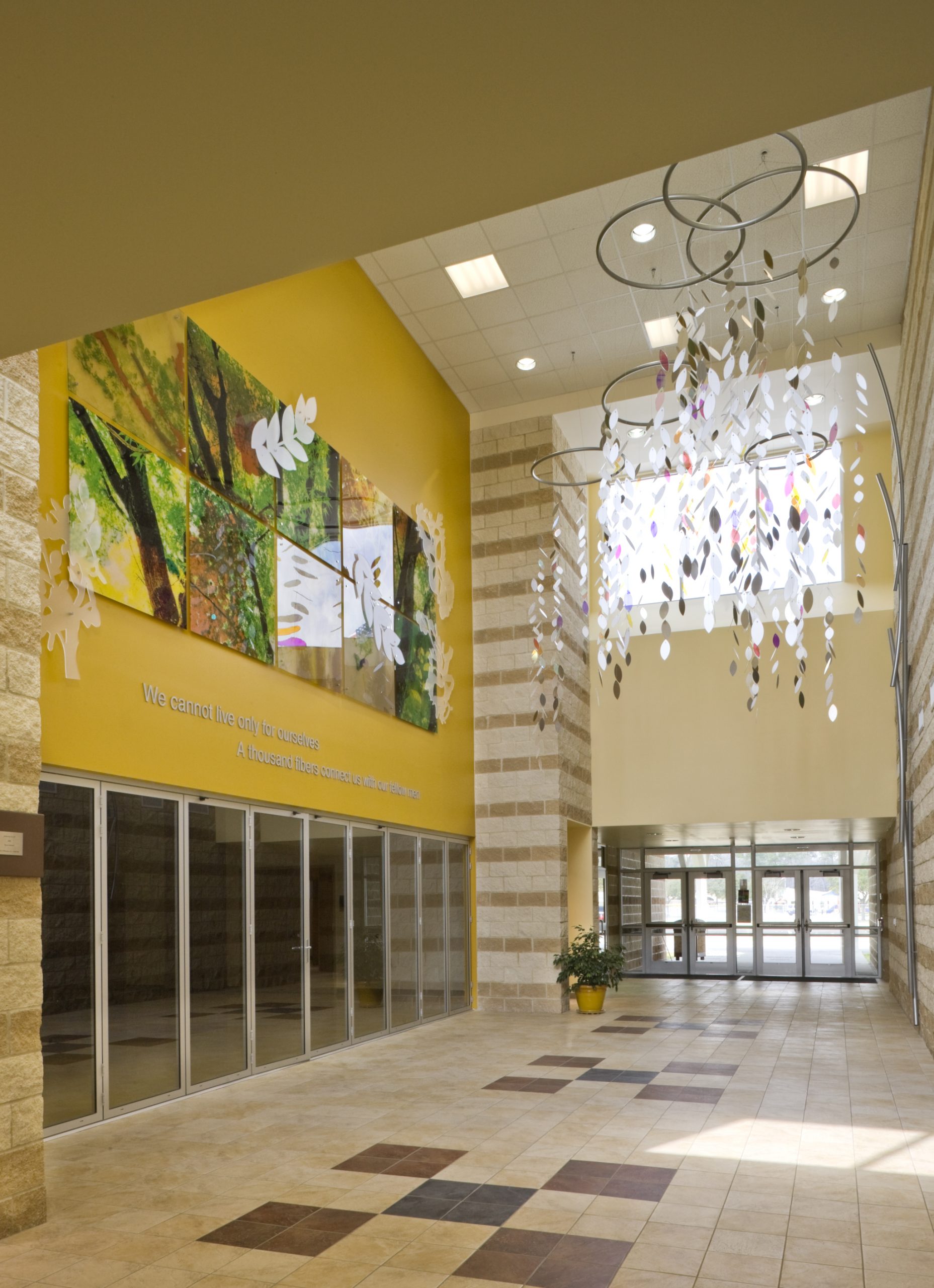 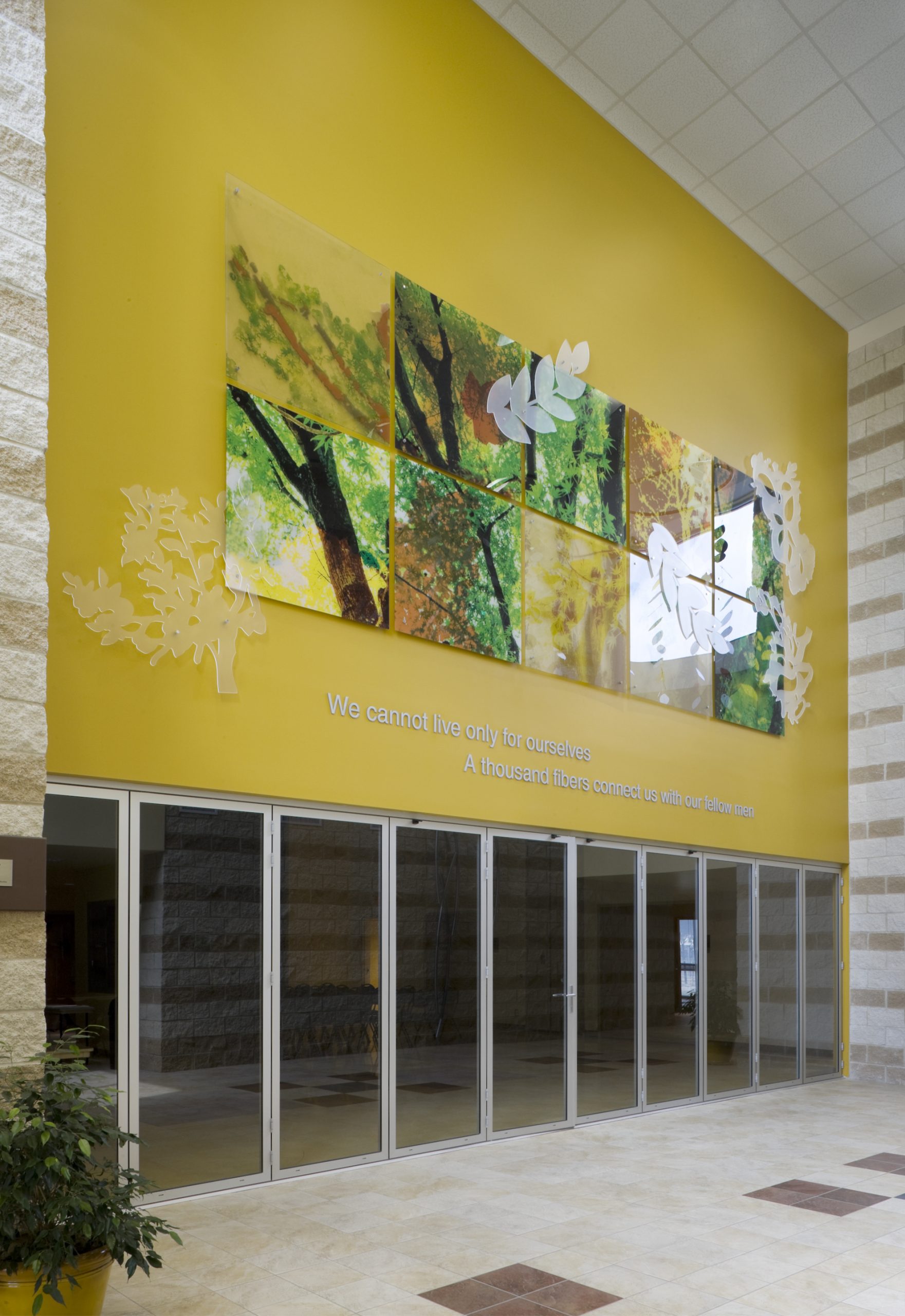 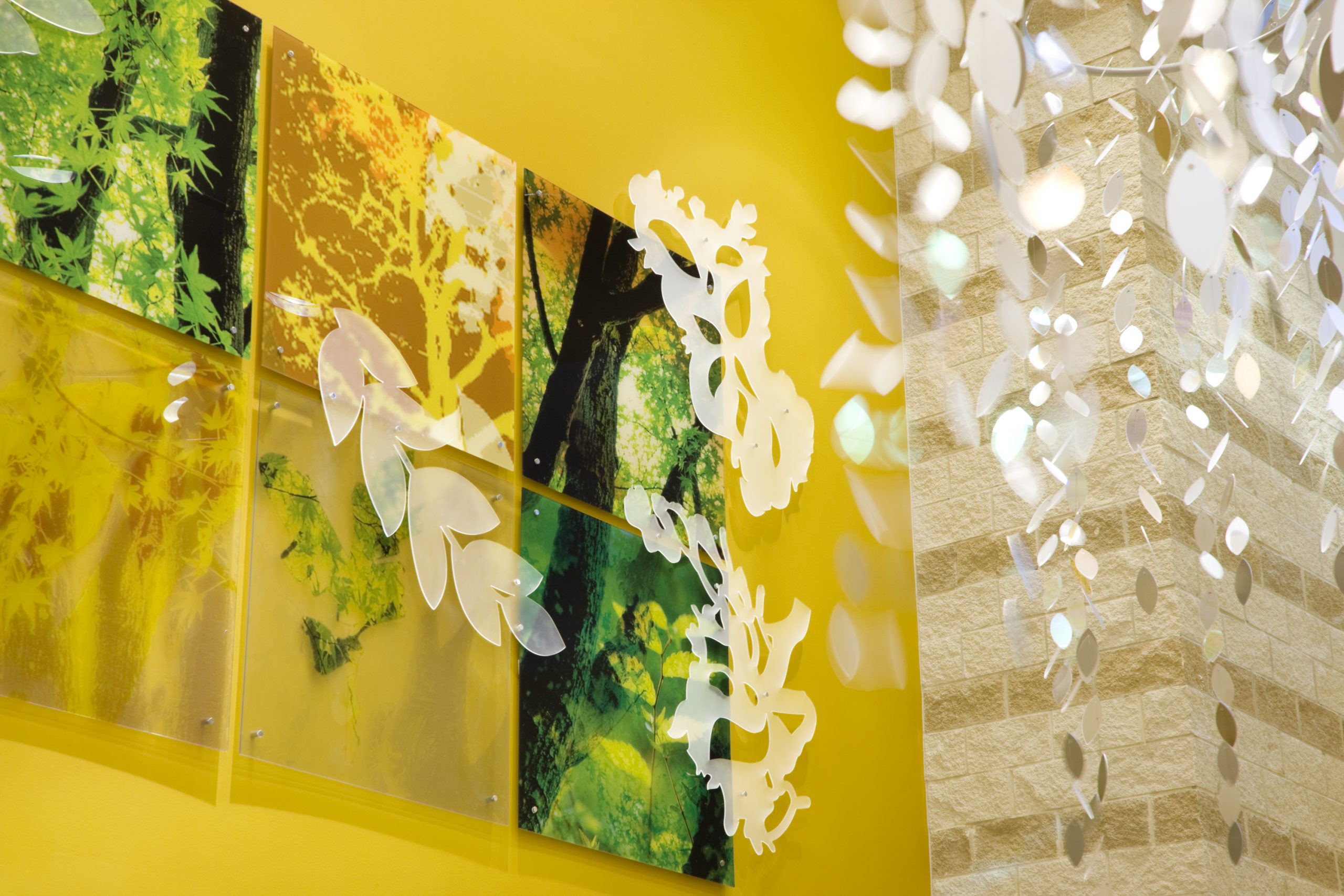 Interior environmental installation is ‘Sheltering Growth’ at the Houston NE Multi-Service Community Center housing several social service groups including WICK & Head Start. Along with Senior / Youth Services this center was developed to support an under serviced population. Set in an unused park, the lobby installation emphasized the new growing community with a 2½-story aluminum tree, suspended aluminum rings with holographic, white and aluminum recycled die cut leaves. The soffit mural represents the nearby foliage of the trees, and a quote by Herman Melville continues the center's voice.

This Community Center was built for an under serviced population in the 5th ward of Houston, TX, called the ‘Garden Terrace District’ in the 1920’s (the first prosperous African American Community in Texas). Set in an unused park, the lobby installation of ‘Sheltering Growth’ emphasized this growing community’s goals for rehabilitation and public connection with their first Public Art Commission. The theme emulates the park setting and natural environment with 2-½-story aluminum tree growing up one wall in the lobby. Included in this environmental sculpture and mural program are the suspended aluminum rings with leaf forms made of recycled raw materials (aluminum, acrylic, holographic acrylic) – and the digital photographic mural panel groupings on the opposite wall, which represent the nearby foliage of the trees as seen under different environmental and lighting contexts. Layered over the digital panels are cut out shadows of branches and tree forms, combined with several lines of aluminum floating text from Herman Melville, to inspire connectivity in this neighborhood. The large open lobby is now able to be used as a destination and event space, which can open up to the auditorium behind the glass doors below the mural.

I worked with the community in all aspects of this project. As in many American Communities that have experienced change and declining environments, this 5th ward area has started to blossom with the influx of younger families, education and political stake-holdership. The community wanted an environmental installation that spoke to their environment as the 'garden terrace neighborhood' yet still show a sophisticated visual language that represents their future. This project was set in a dangerous park area with a high percentage of juvenile crime. Since the community owned the park this site for this Community Center was the best possible solution, which resulted on a 90% reduction of vandalism and crime, while giving a destination space for Senior, adolescents and the very young who are starting their schooling through the Federal Head Start program. For me, as a public artist, this is the best type of project solution, where a whole community can find their own language and voice in a project that only helps to support growth and community.

The ambient light of the clear story windows reflect the various 'holographic' dichroic leaves, which change the whole room, at night, to a 'sparkly' magical environment. This allowed the lobby to become a public event space and utilized the center to a higher level of participation. When I was installing, a group of young kids and teenagers were running through the entry into the Lobby, but when they saw the leaves and tree for the first time, all stopped and were quite and then one little boy said "I feel special now"..