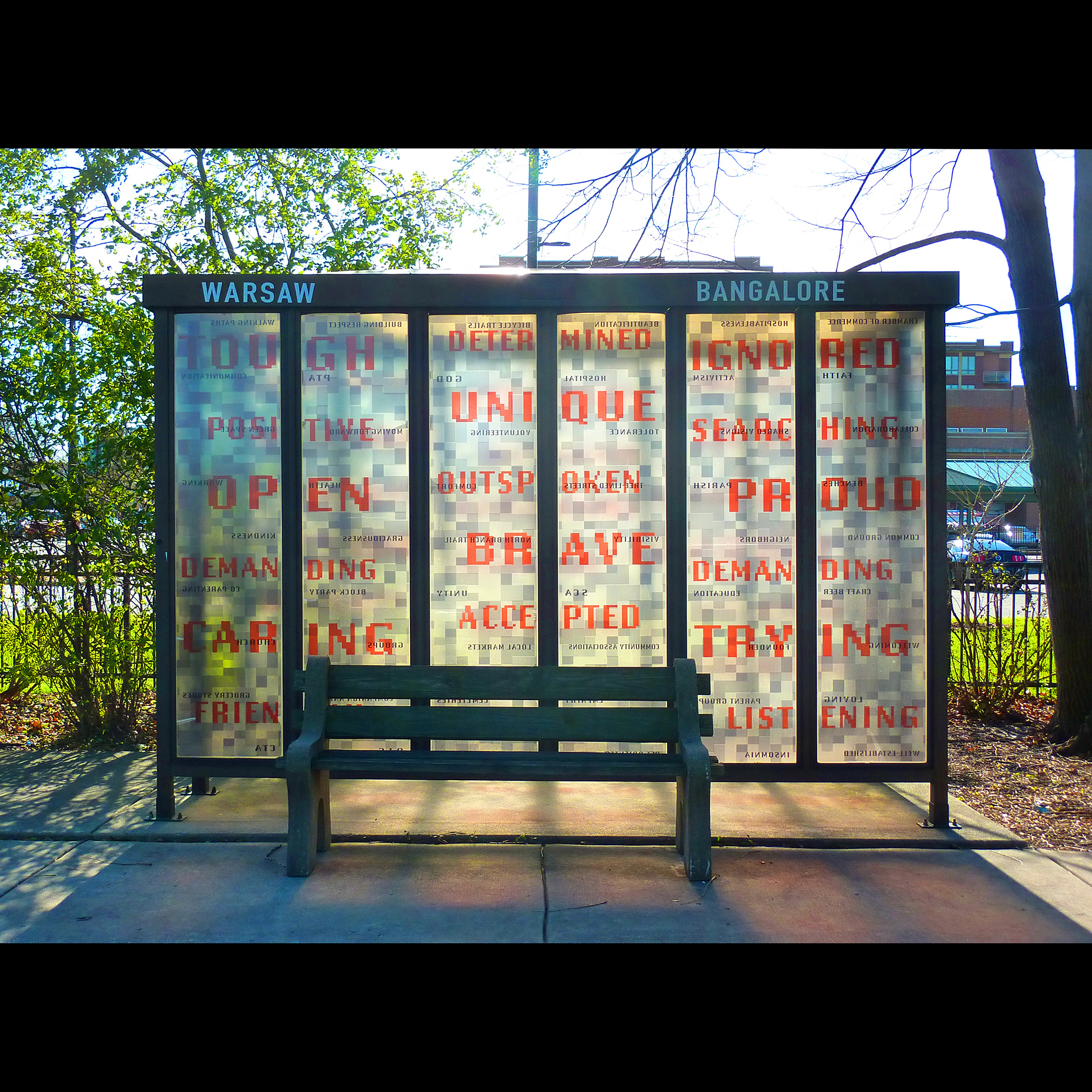 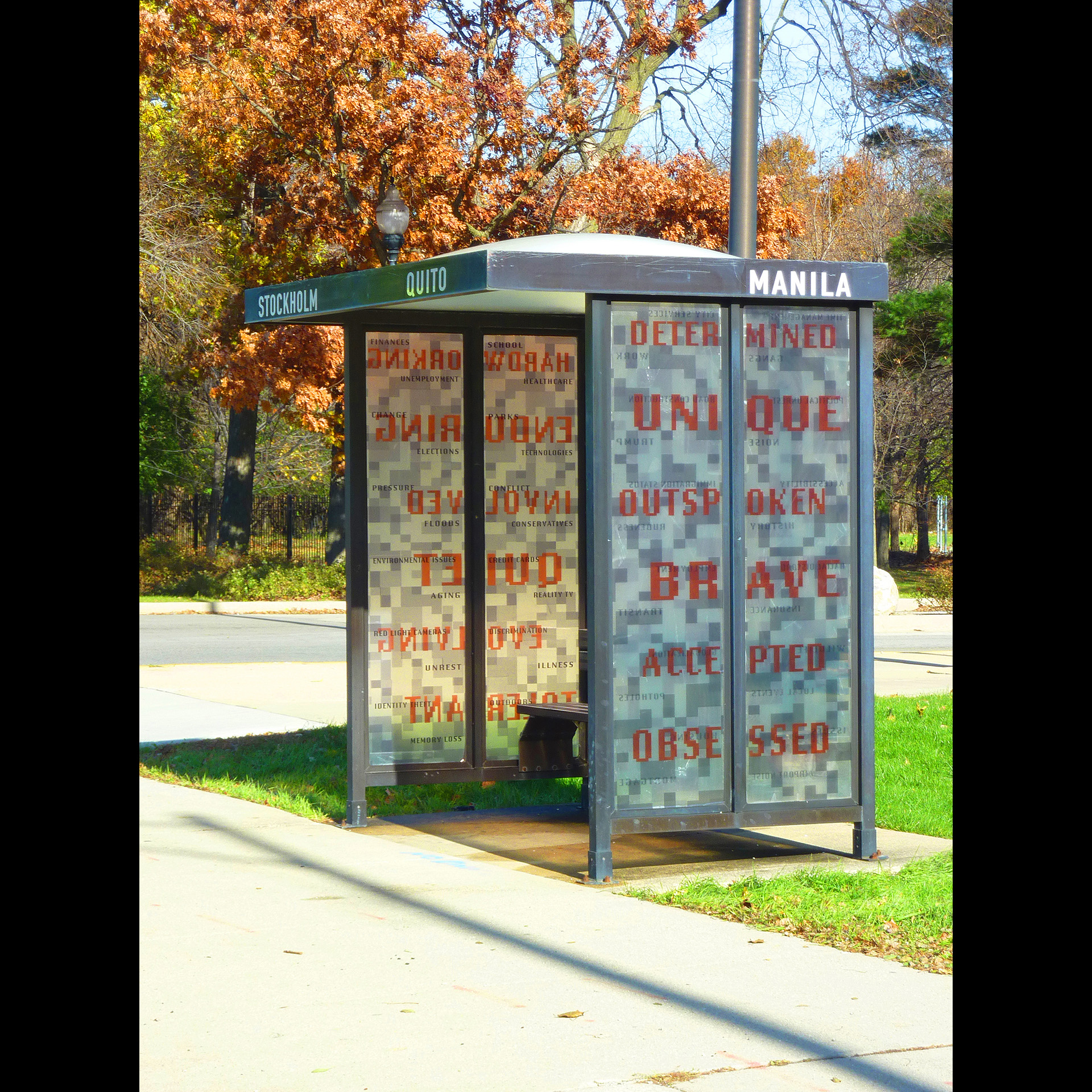 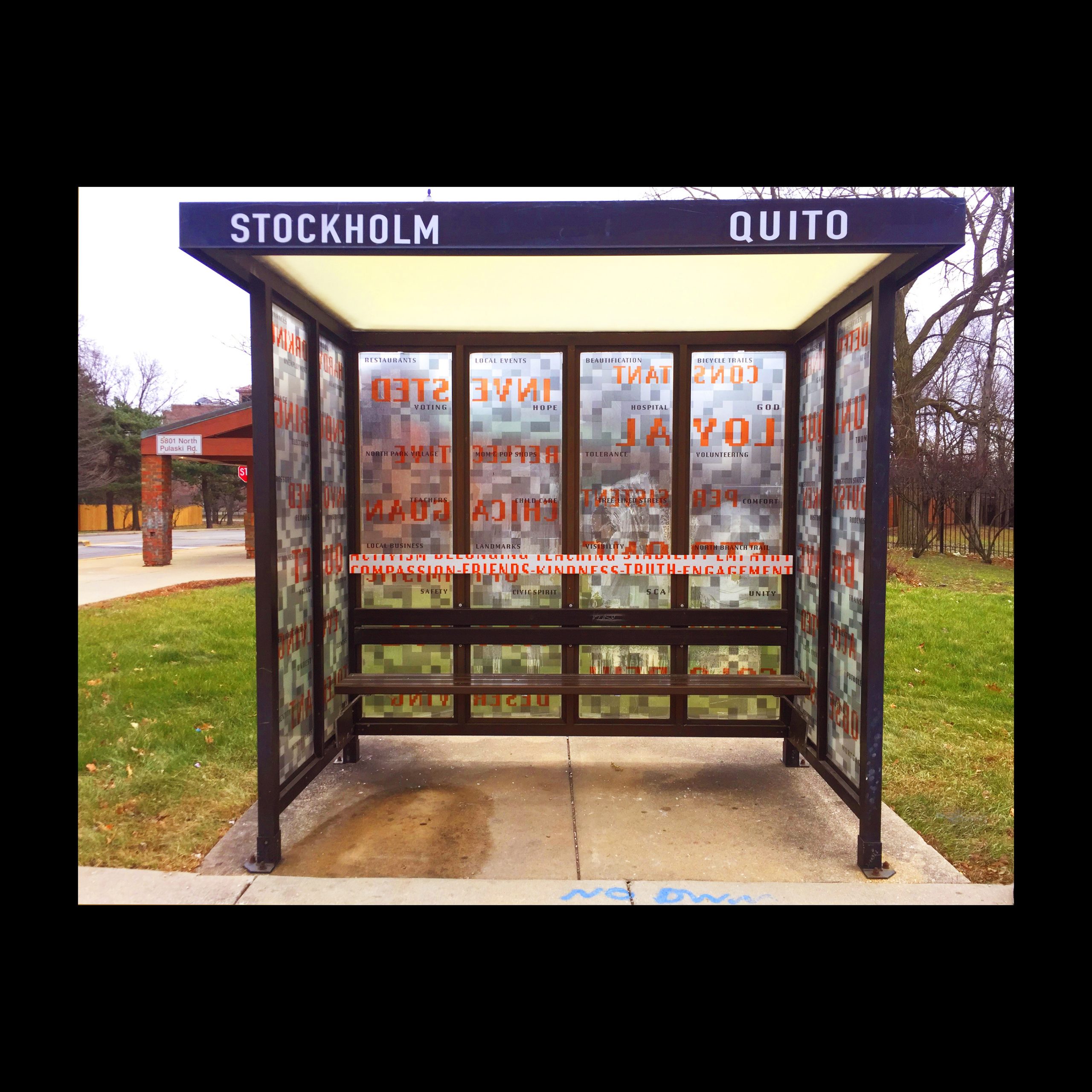 This text-based art-system was funded as part of Chicago’s 50×50–Year of Public Art initiative. Individual and community experiences of endurance were collected and a taxonomy of words was incorporated as inscriptions on three vintage CTA bus shelters in the 39th Ward, a culturally diverse area on the Northwest Side. Inscriptions were deployed as digitally-imprinted film on both sides of existing glass panels, die-cut vinyl place names on the overhangs and screen-printed aluminum handrails inside. Typical dimensions are: 8’-5”H x 4’-3”D x 9’-6”W

Having escaped the demolition and privatization that was the fate of most CTA bus shelters, these 1970s era structures have been reclaimed and unified through the deployment of bit-mapped inscriptions seen against a translucent background pattern that suggests highlighted onscreen text as well as digital camouflage. After collecting community input (via the 39th Ward’s Facebook page), individual and communal experiences of endurance have been deployed on the metaphoric armatures of the shelters. The words inscribed on the windows facing outward are self-descriptive; the words inscribed on the windows facing inward reference social forces and dynamics; and the words inscribed upon interior handrails are active words (within physical grasp) that reference community support systems. In place of street locations, the shelters are marked with global cities of origin, representing the diverse cultural identities of residents who exist within the 39th Ward. These inscribed shelters proclaim that diverse communities survive and thrive within the transient cityscape of Chicago.

After a selection process, Chicago designers and artists worked with ward offices to consider potential sites for the 50X50 initiative. In discussions with the alderman, her staff and a Chicago Department of Cultural Affairs & Special Events curator, we zeroed in on the only three CTA bus shelters that remained in the 39th Ward. CTA bus shelters are evocative metaphoric armatures---simultaneously visible/ invisible, used/ abused, local/ metropolitan. We collected community input via the 39th Ward’s Facebook page, with community advisors targeting the attention of underrepresented cultural groups in the Ward for their contributions. The artist edited and structured the deployment of words on the CTA bus shelters as described above. The fabrication and installation of all the elements on site was carried out by a sign company in the teeth of an approaching winter storm.