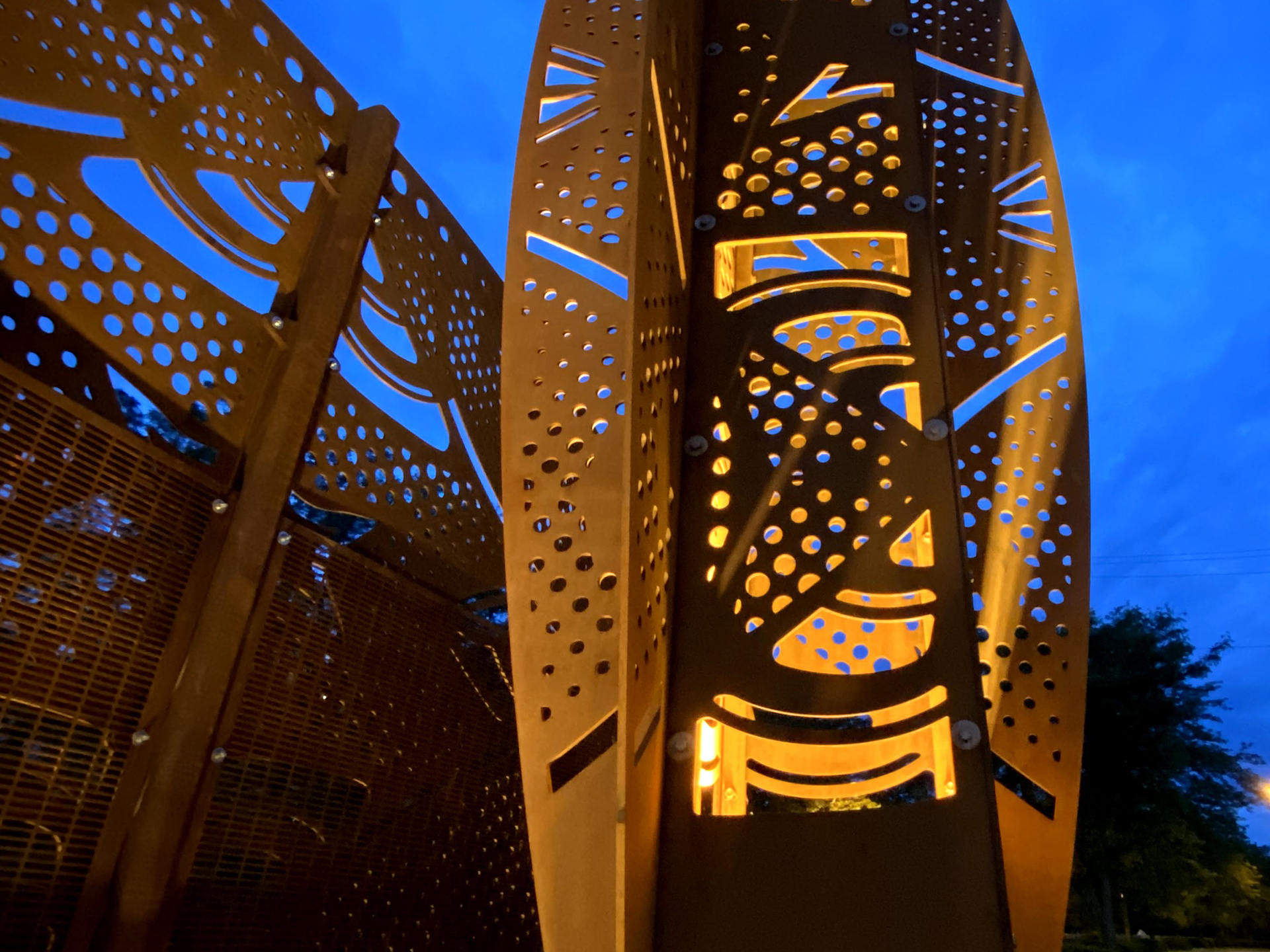 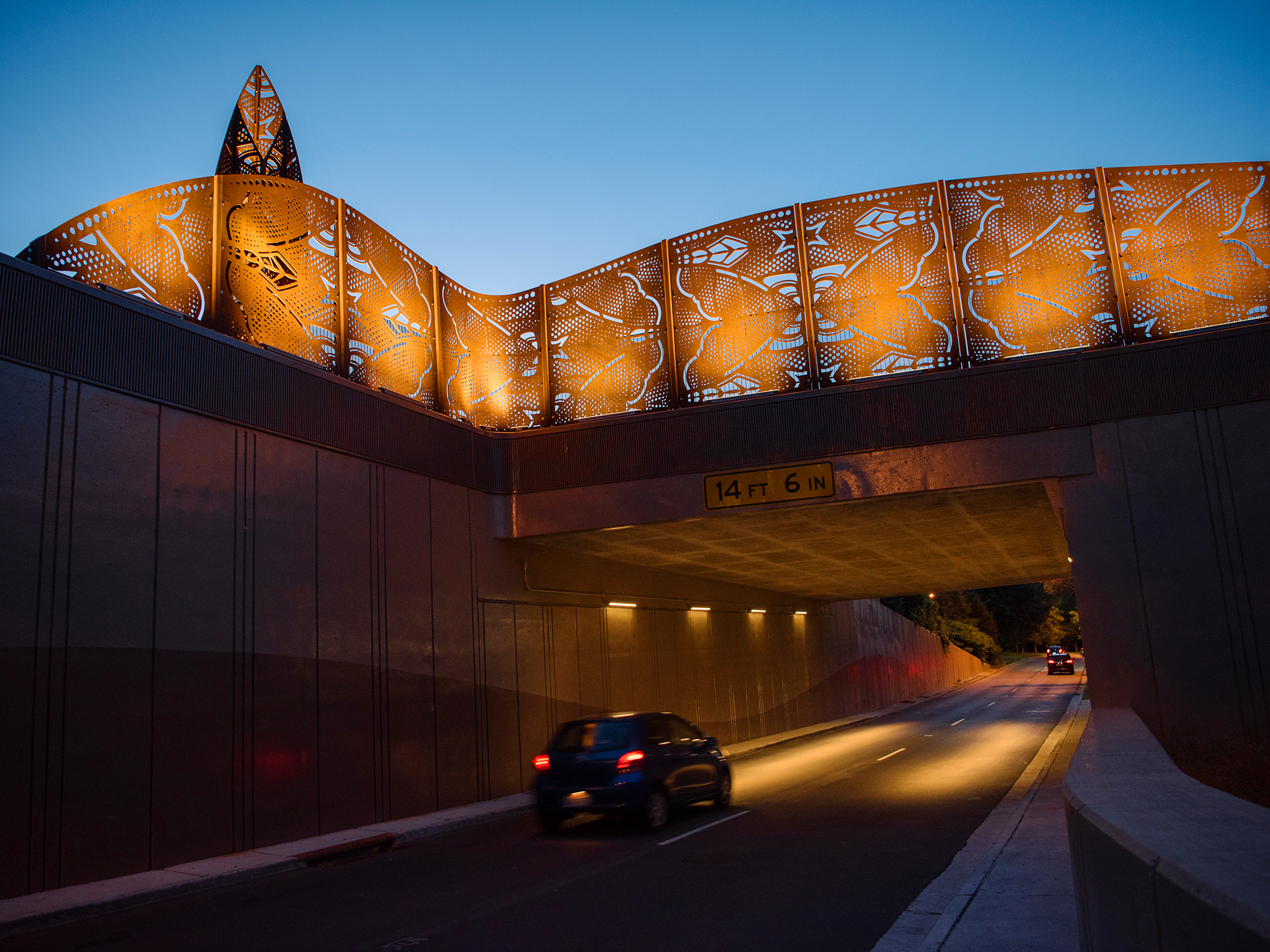 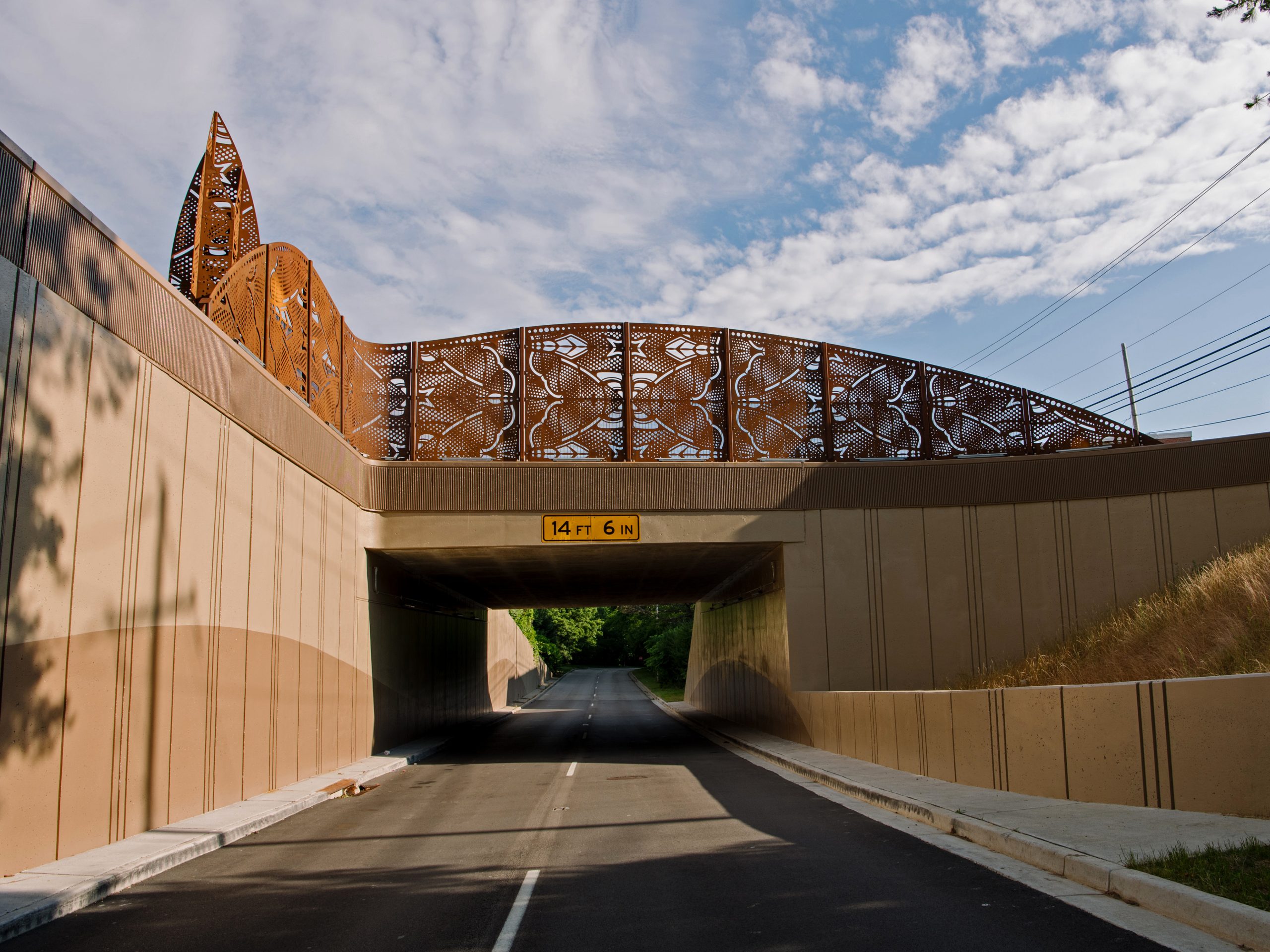 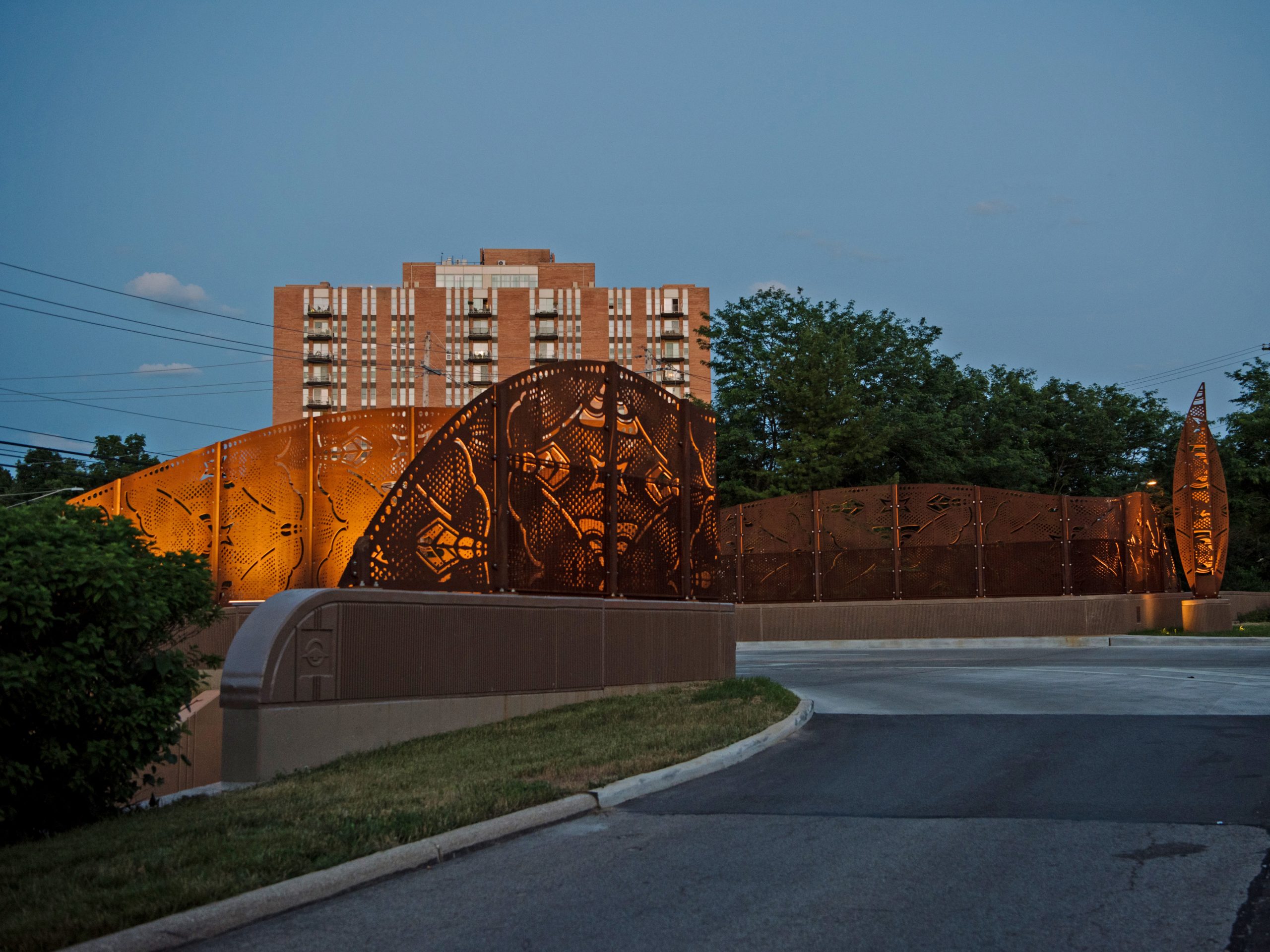 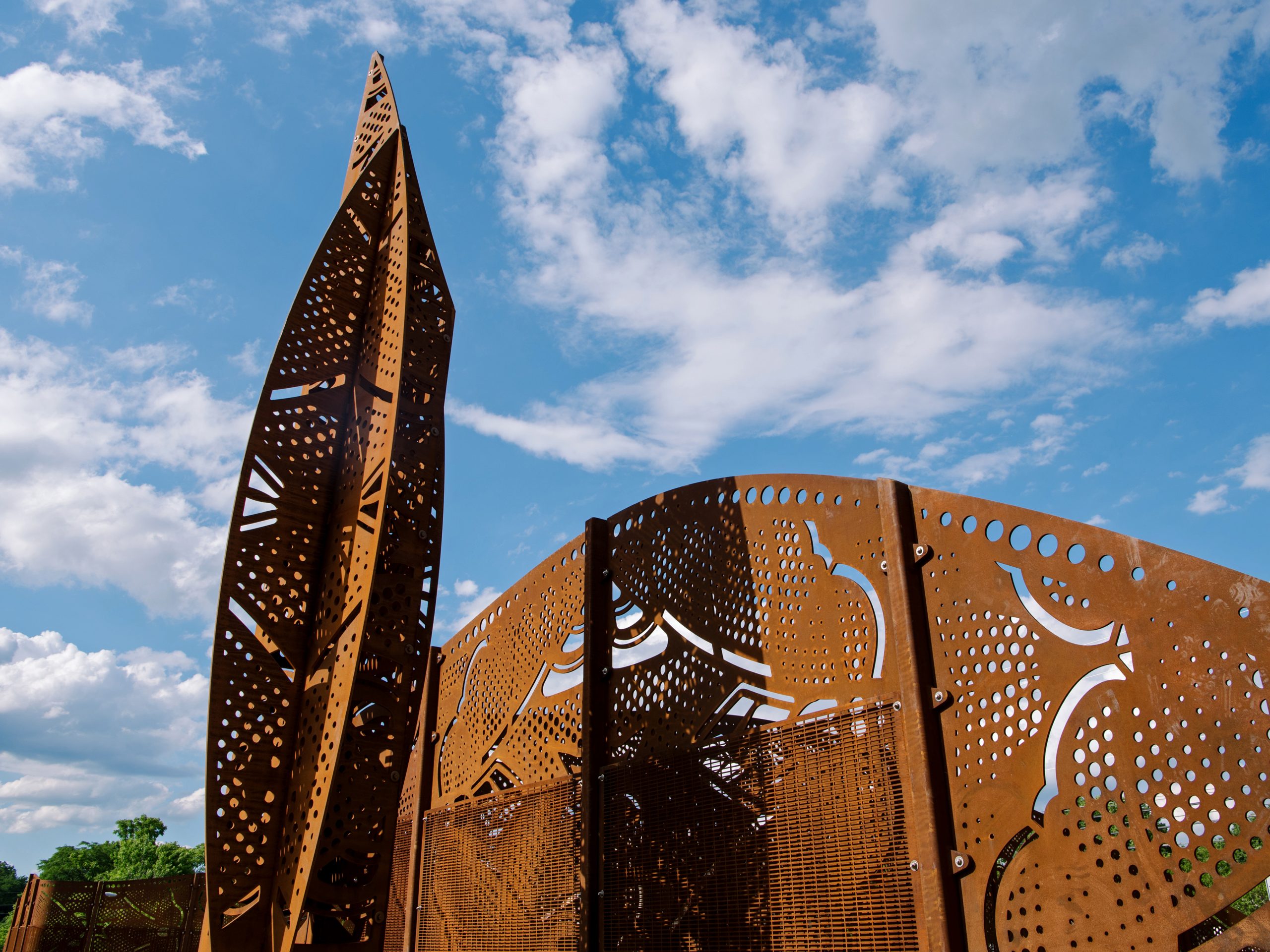 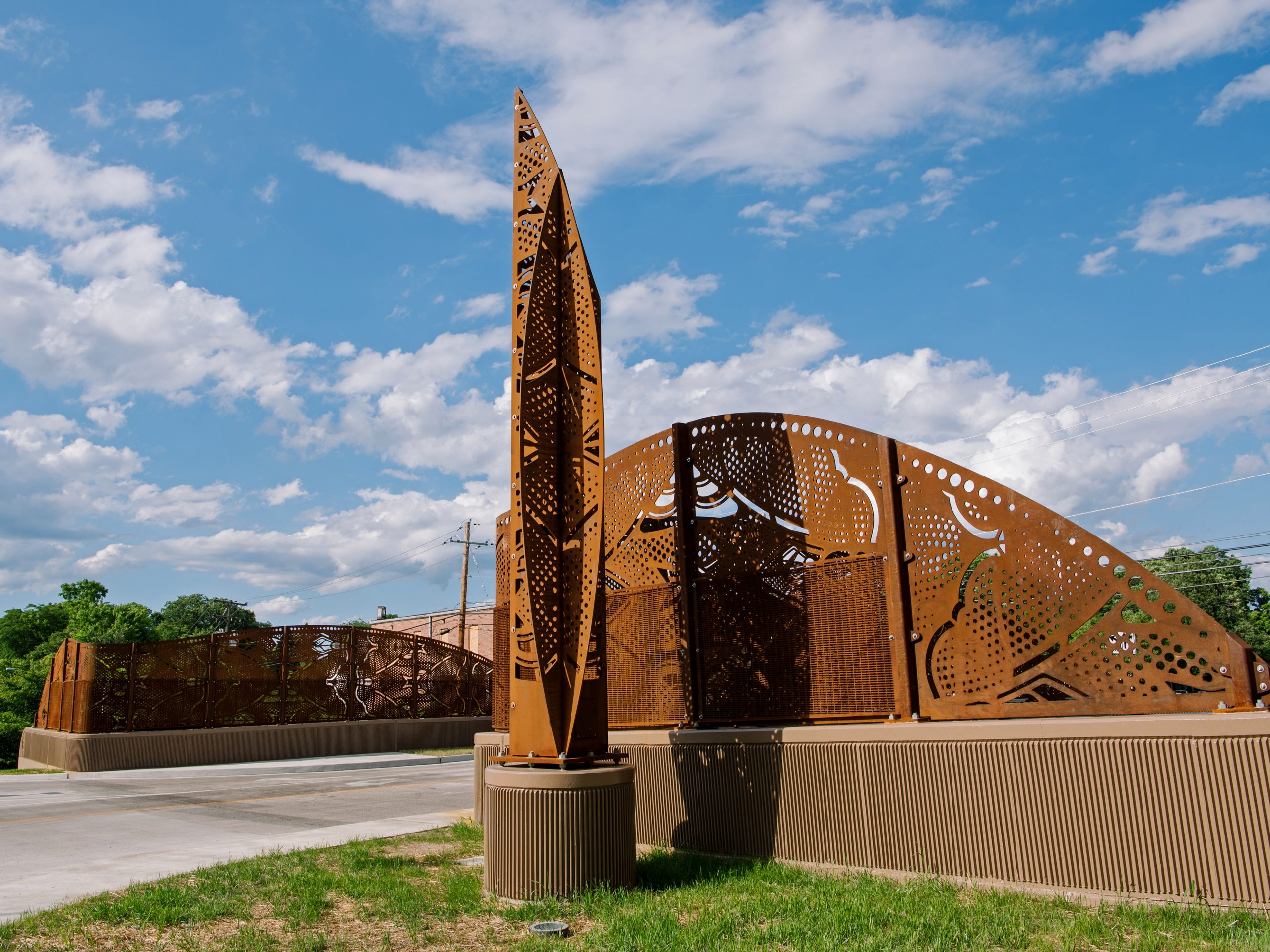 The Schantz Gateway transforms a bridge near the entry to Kettering into a city gateway marker that can be experienced both entering and leaving the City. This project is inspired by the “can do spirit” of Kettering, the tree-lined streets, the historic and modern transportation lines at the site, and the local history of the area, including Kettering’s relationship with the National Cash Register Corporation, that once had an office near the site. The intricate patterning recalls the ornamentation of the historic cash registers manufactured in the area. The punched patterning of the historic cash registers, on view at the nearby Heritage Center is reinterpreted in laser cut metal. This patterning follows curves taken from the patterns found in the trolley cars that once ran through the site. These historic pattern precedents are combined and given a contemporary treatment that transforms leaf patterns into abstracted butterfly imagery and diamond patterns. Butterflies are symbols of transformation and diamonds are a symbol of strength, representing Kettering’s renewal and vitality today. The screens and tower are the gateway markers, and they are illuminated to become beacons at night.

The goals for this project were to create a gateway and a welcoming gesture into and exiting Kettering, from nearby Dayton. As the approach is on a divided highway, at different ground planes, it was important to create a gateway that could be seen from several viewpoints. At the upper level, the tower attracts incoming visitors to Kettering, announcing the entrance to Kettering. At the lower level, heading from Kettering to Dayton, the screens provide a dramatic exit. Also, as the gateway is near the Heritage Center, run by Dayton History, whose new archives will flank the site, it was important to reference local history, while creating a contemporary visual statement, that captures the innovative spirit of Kettering and nearby Dayton. We used technology, creating laser-cut screening and a light tower to tell a story, resonating with local history and the inventive spirit of the community. This is one of the first projects to demonstrate Kettering’s desire to be recognized through its Art. Art tells a story, that is layered in meaning and metaphor. Our goals, were to tell Kettering’s story through a thoughtful reflection, while looking to the future for new innovations.

The team of engineers, city officials, stakeholders, and the public artist closely collaborated on means, methods and budgets to integrate Art into the project on the scale of the City, transforming the infrastructure into a gateway. This is Kettering's first big municipal multidisciplinary project that involves humanizing security fencing, retaining walls, abutments, lighting, and landscaping, creating a holistic statement about place, culture and people. This project included close coordination with local and federal authorities to meet all codes required for federal highways, including limiting the hole size of security screens. The project was challenging and dynamic, with a talented group of people at the helm who aspire to work together to realize good work and a better product for the City and its people.

The Schantz Bridge Design Team, City Staff, Stakeholders and the Arts Commission were supportive of this project and their City. They were looking to realize long term goals and set precedents for future projects that meet or exceed their historic accomplishments. Hopefully, this project is the first of many, that will raise expectations and raise the bar for future public works and civic development.