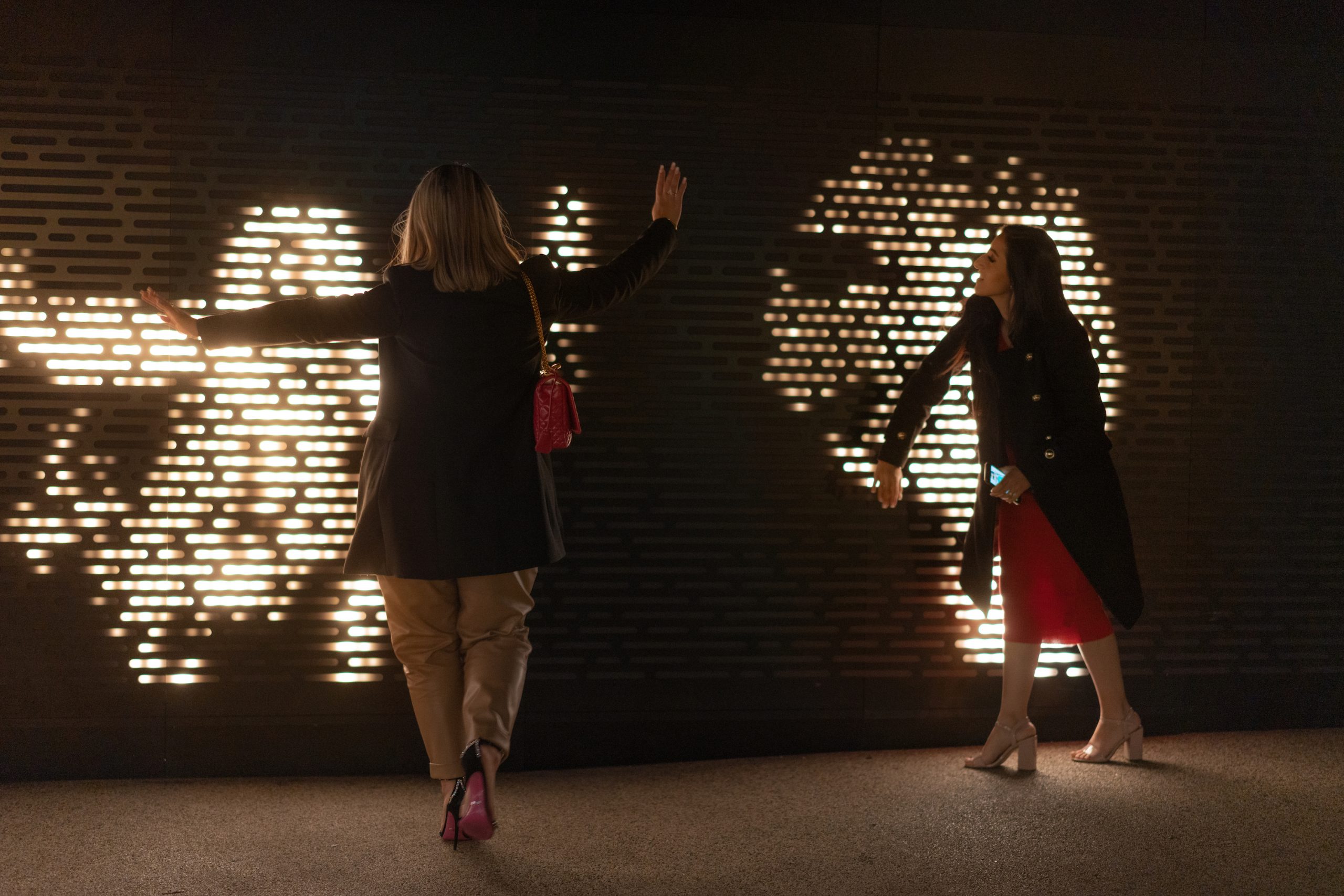 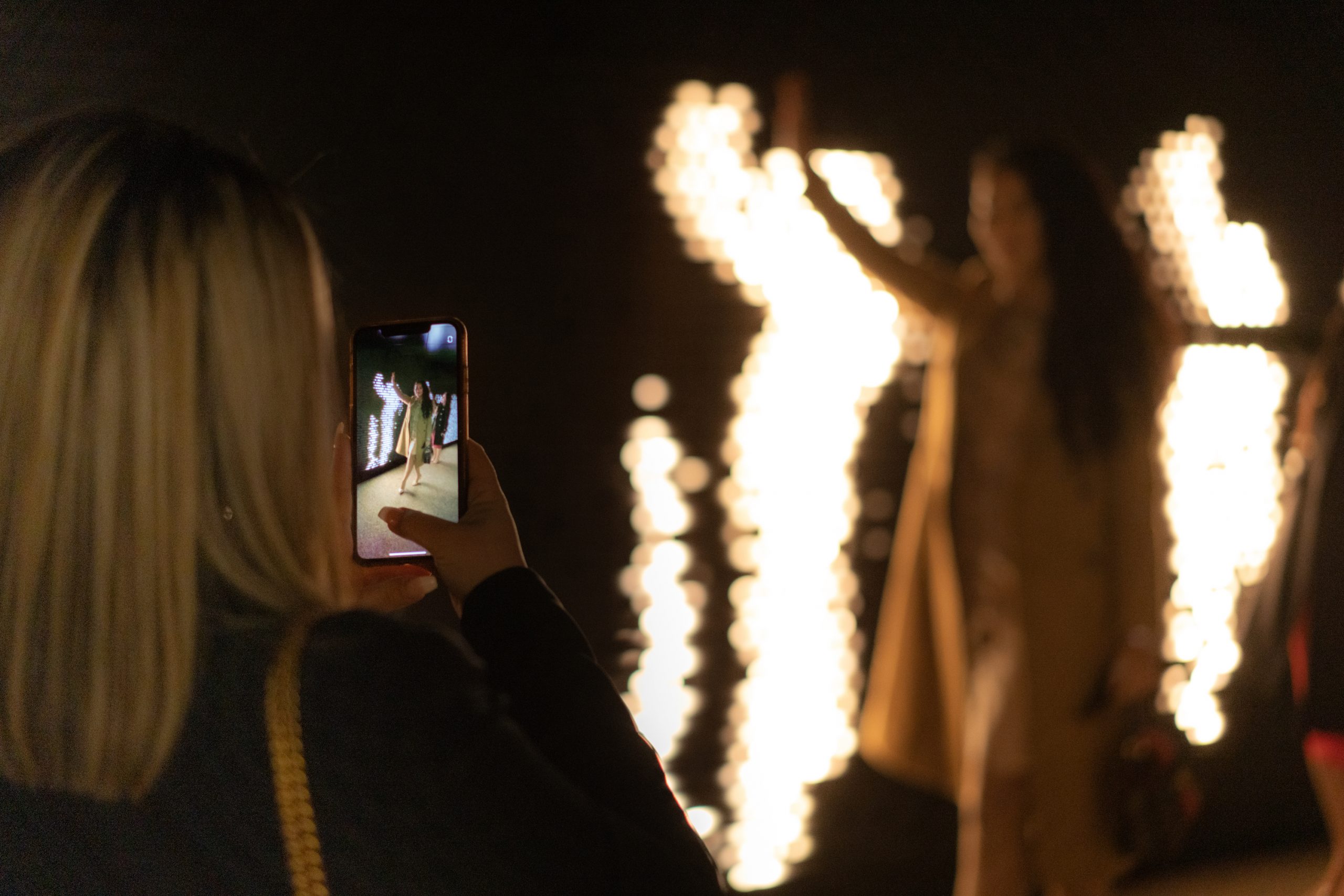 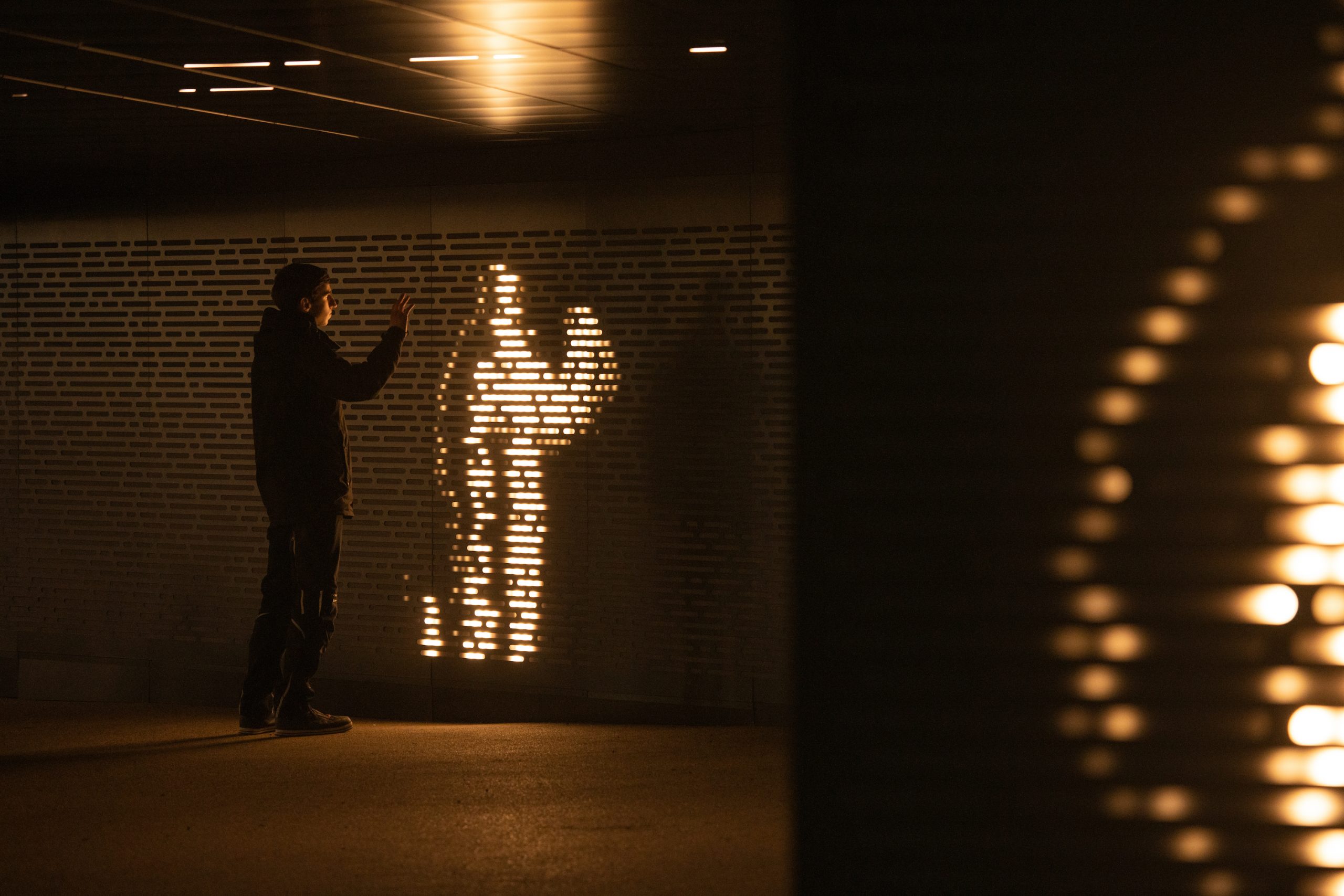 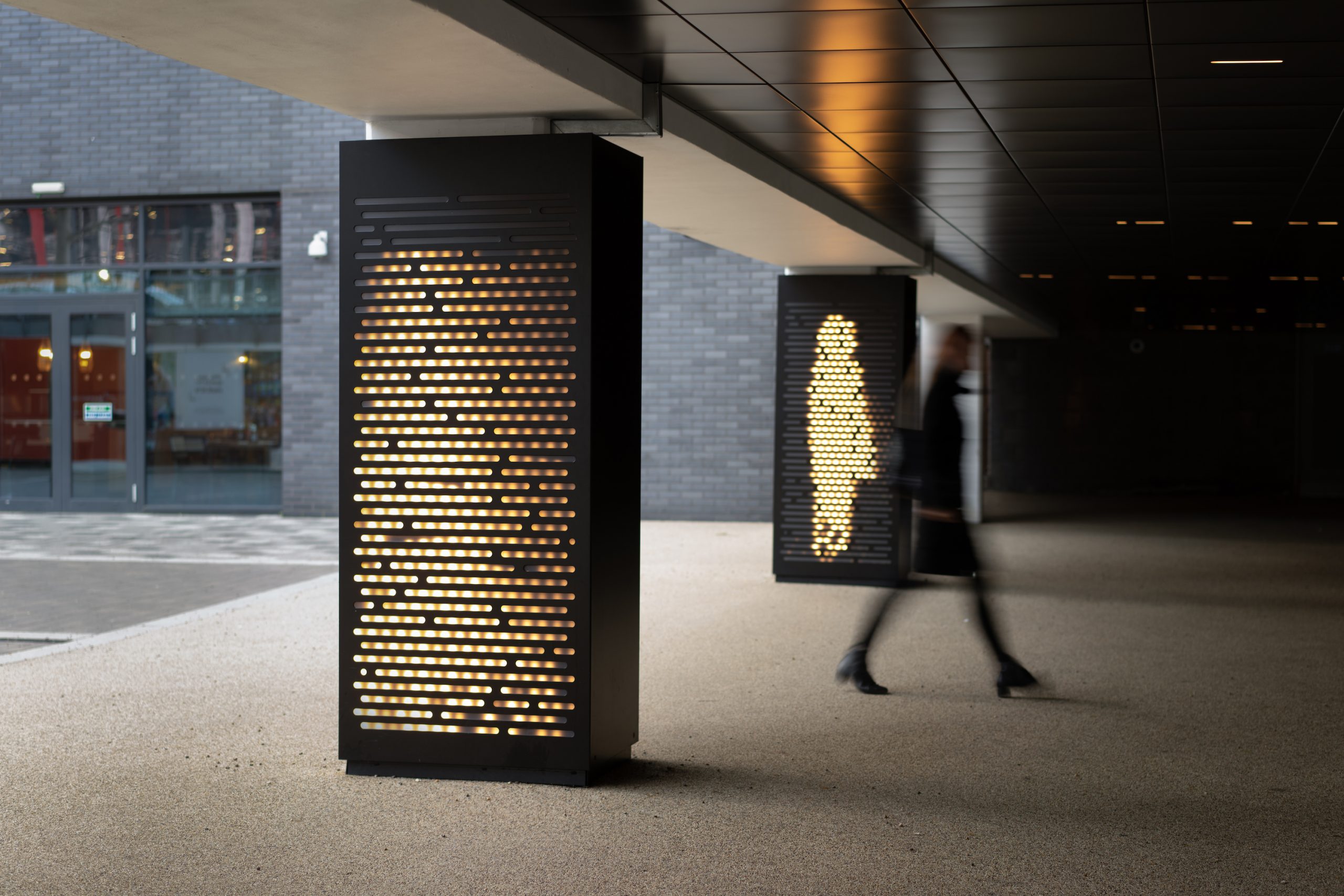 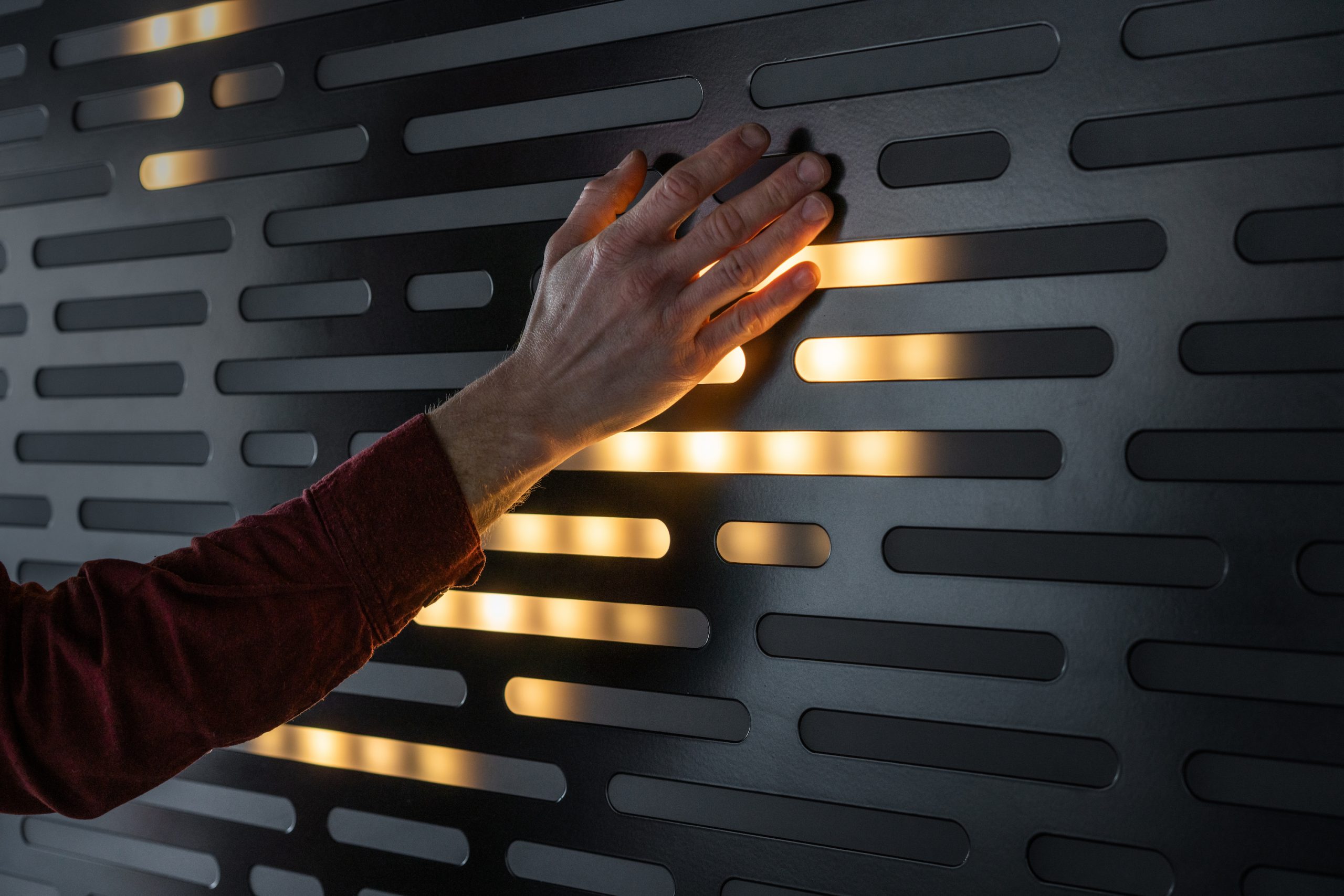 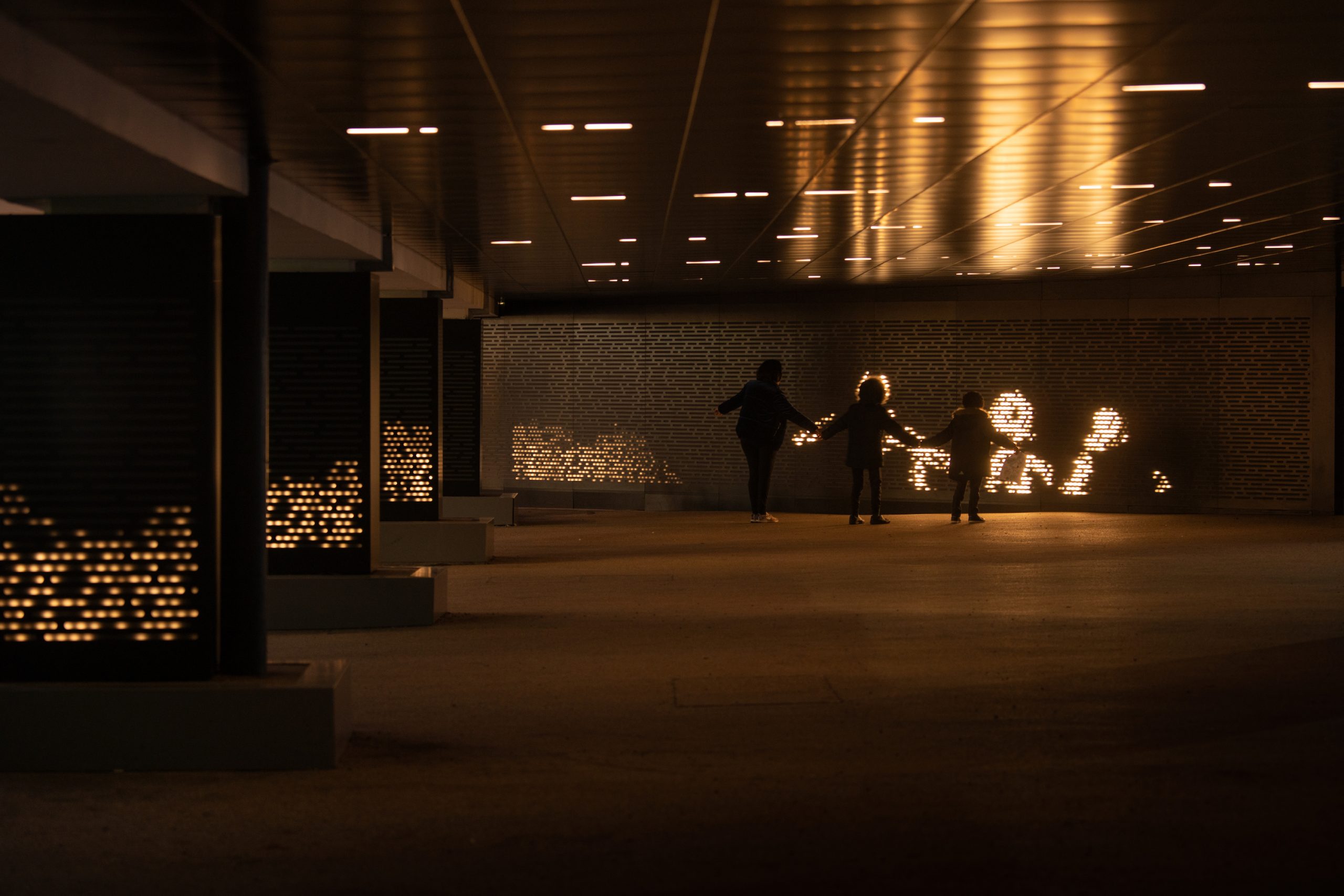 Shadow Wall, integrated into the eastern elevation of the Royal Route underpass at Wembley Park, is a site-specific monochromatic media artwork activated by movement. Taking inspiration from the everchanging flow of people passing by, JBS proposed a digital intervention that references the past, when the Royal Family arrived in procession, and amplifies the present circulation of pedestrians.
A bespoke system of infrared light sensors reveals people’s sillouettes on the surface of the underpass to create an interactive urban canvas. Confronted with their digital counterpart, passersby are encouraged to dance with their shadow and in turn with each other. In doing so, they create a dynamic palimpsest of overlaying figures.

Wembley Park is Quintain’s 85 acre development in North West London. Quintain instructed Jason Bruges Studio to create an uplifting intervention for the ‘Royal Route’ underpass. The speed of change in the area revived the need for a distinct identity and artwork that would act as focal points along the visitor journey around the site and in particular towards Wembley Stadium. The goal was to provide a memorable, attention-grabbing experience for Wembley Park’s 16.4m annual visitors and to encourage social participation.

Shadow Wall was realised through a dynamic collaboration with Quintain. The artwork is a site-specific evolution of Back to Front created by JBS in 2014. The bespoke printed circuit boards that sit within the artwork have been refined through years of in-house research and development. Shadow Wall demands a unique system that gathers data locally to the artwork can respond accordingly. This was developed through close collaboration between JBS production designers and creative technologists. The PCBs have been engineered to take readings of infrared light levels and feed this back to a computer. This data is then processed using a gaming engine called Unity that in turn determines how the artwork should function in response. For example, when either no one is directly interacting with the artwork or if swathes of people are passing by, Shadow Wall plays back ‘remembered’ images so the visual effect is still readable and impactful. The specific technical design for Shadow was supported by The White Wall Company and White Wing Logic.