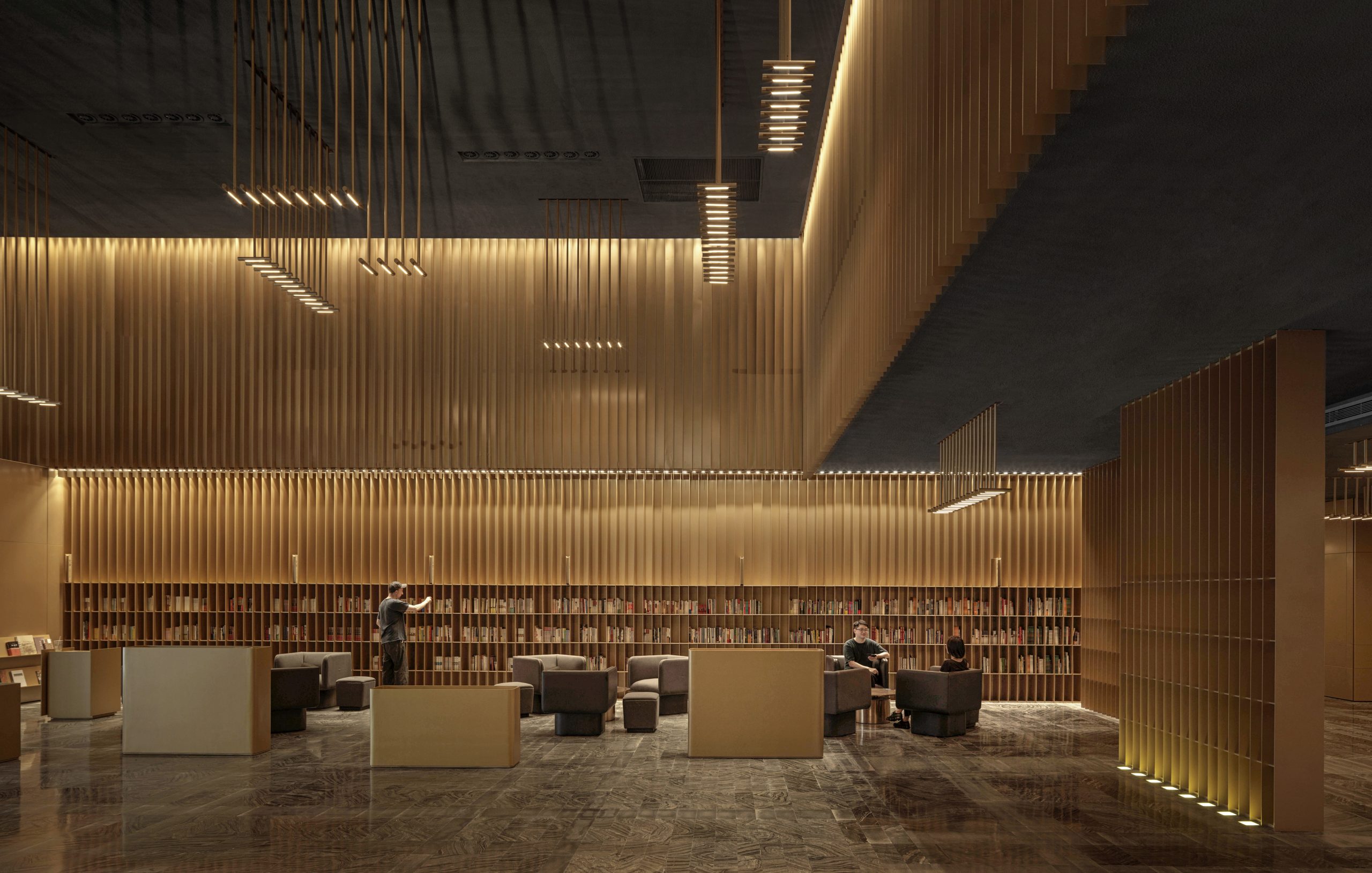 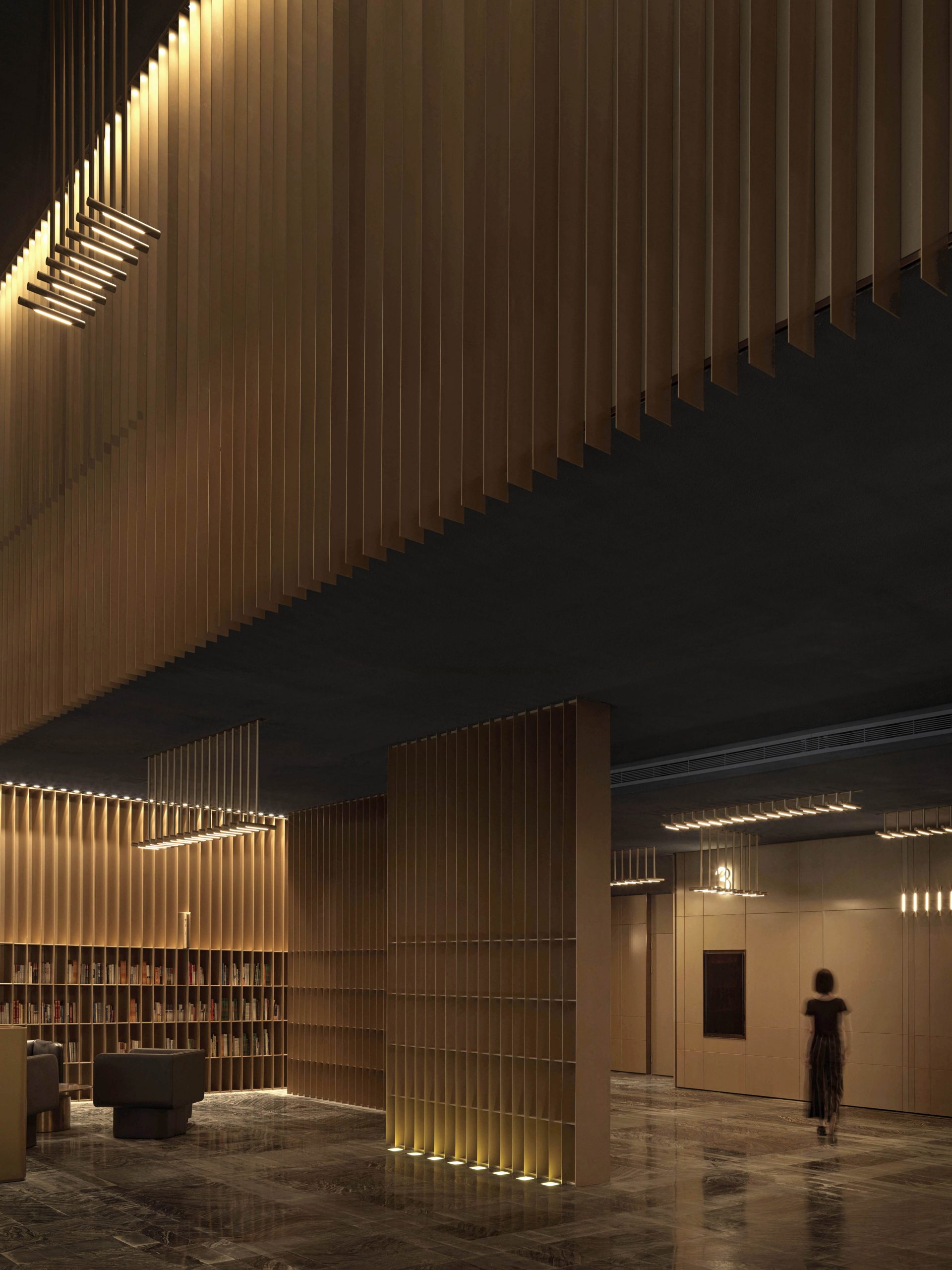 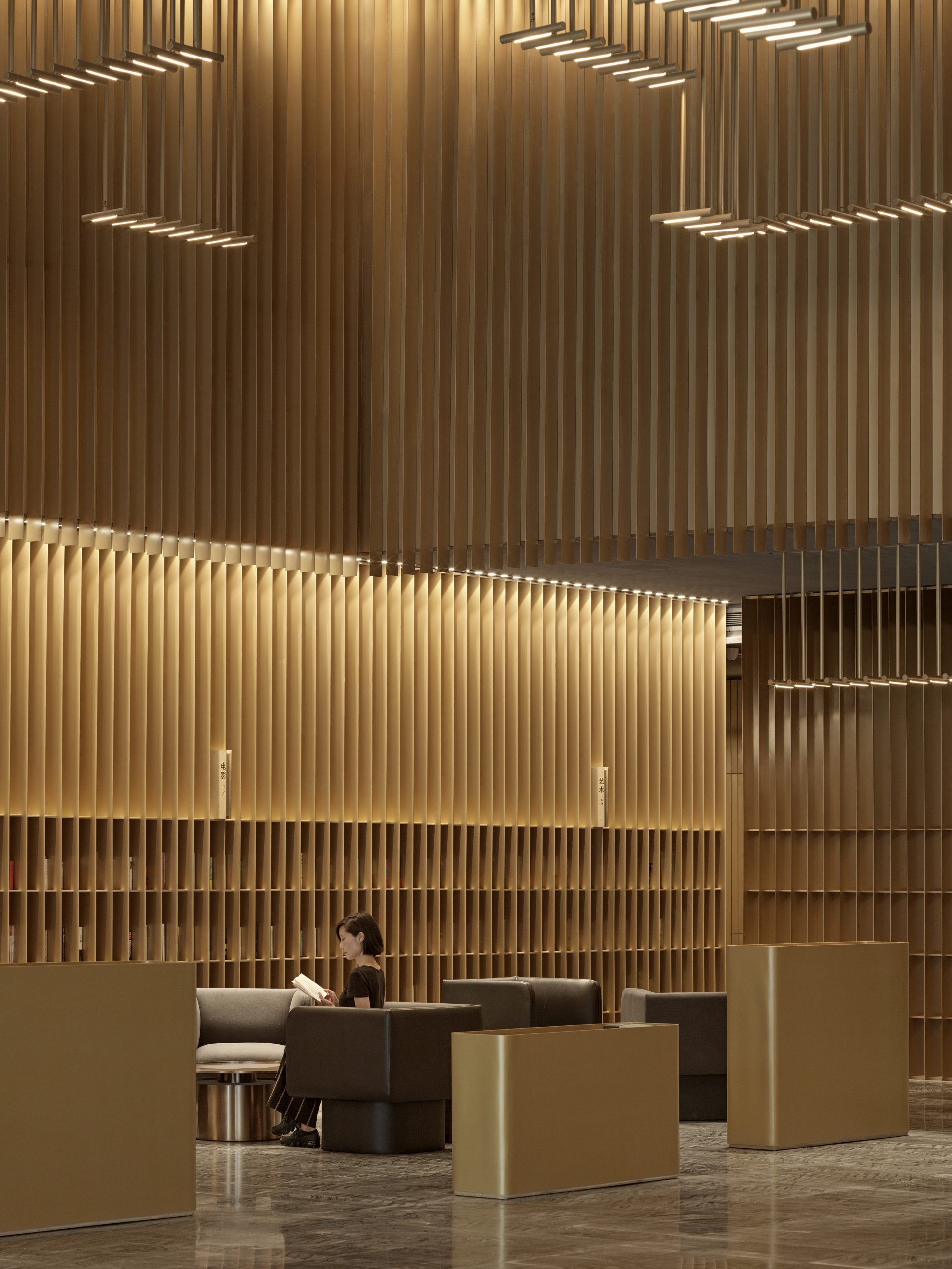 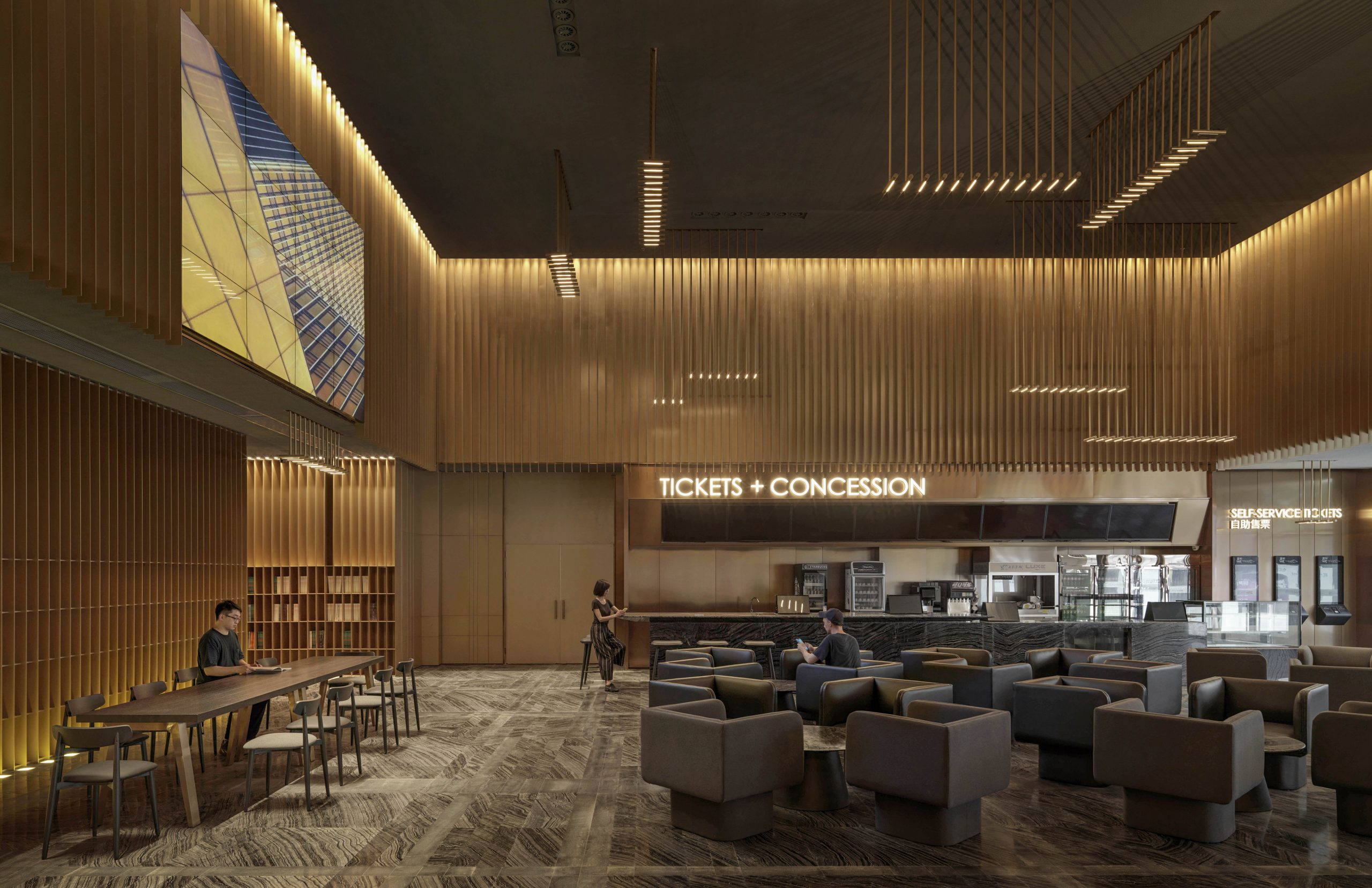 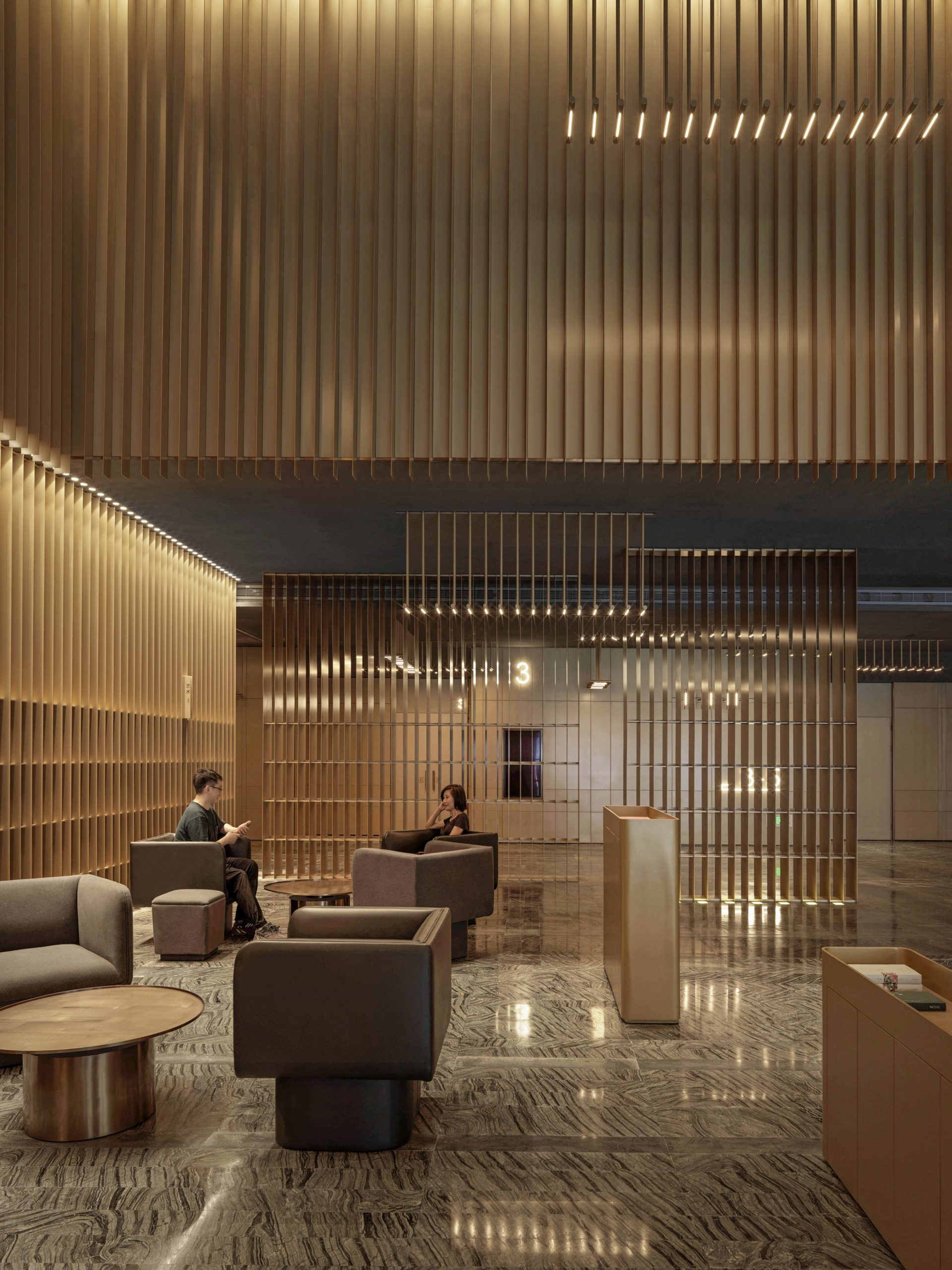 Since the advent of sound in cinema, the film score has become an integral part of the movie experience. The designers were inspired by the film music and also by the name of the shopping centre where this cinema is located that contains a Chinese character which means ‘piano’. These 2 elements worked together and motivated the designers to come up with ‘strings’ as the design theme for this project, hoping that this cinema design will create yet another timeless classic as if an epic film with a rousing music score.

For this project, the designers take a different design approach from traditional cinemas, combining the commonalities between music and movies, and integrate the functions of the book area to give this new cinema a unique personality. The designers convey all aspects of the entire theater space in the form of ‘strings’, and use this theme to connect the cultural attributes of music, movies and books. It is yet another innovative design which will leave an unforgettable experience to all arrivals.

Elements derived from ‘strings’ are present throughout the interior. ‘Strings’ from low to high-pitched hung from the ceiling in parallel, as if awaiting for the musicians to perform. Vertical frames surround the lobby and extend all the way from the ceiling to the floor. Right from the beginning, the designers had an image of how the ancient scholars played the musical instrument and read in tranquillity, thus adding the ‘bookshop’ element for this design. The ‘strings’ concept is applied to the bookshop design, in order to intensify the combination of these 2 cultural elements. The bookshelves are the extension of the upper frames, the lowest 3 layers are used for book display. The designers want to create a Zen resting space for the guests through the mix of ‘strings’ and ‘books’ - all of this boils down to simplicity and purity of lines, no highly-contrasting colours are used. The variation of the interior is brought to you by the light and shadow created through lighting, which cast interesting shadows throughout the space.

Flooring in the space is panelled together by 2 kinds of stones in different material and colour. They are assembled vertically and horizontally, the orientation echoes with the custom-made ceiling lighting.

The ‘strings’ concept extends all the way to the auditorium hallway. The ceiling light, wall sconce and floor patterns all reverberate the ‘strings’ theme. This effect is especially magnified at the IMAX auditorium. In this gigantic space, ‘strings’ are assembled in various heights, then extended from the ceiling and connected with the carpet patterns. To echo with the theme and serve as a safety function, the designers added a ‘strings’-inspired guardrail in the front that extends from the ground.