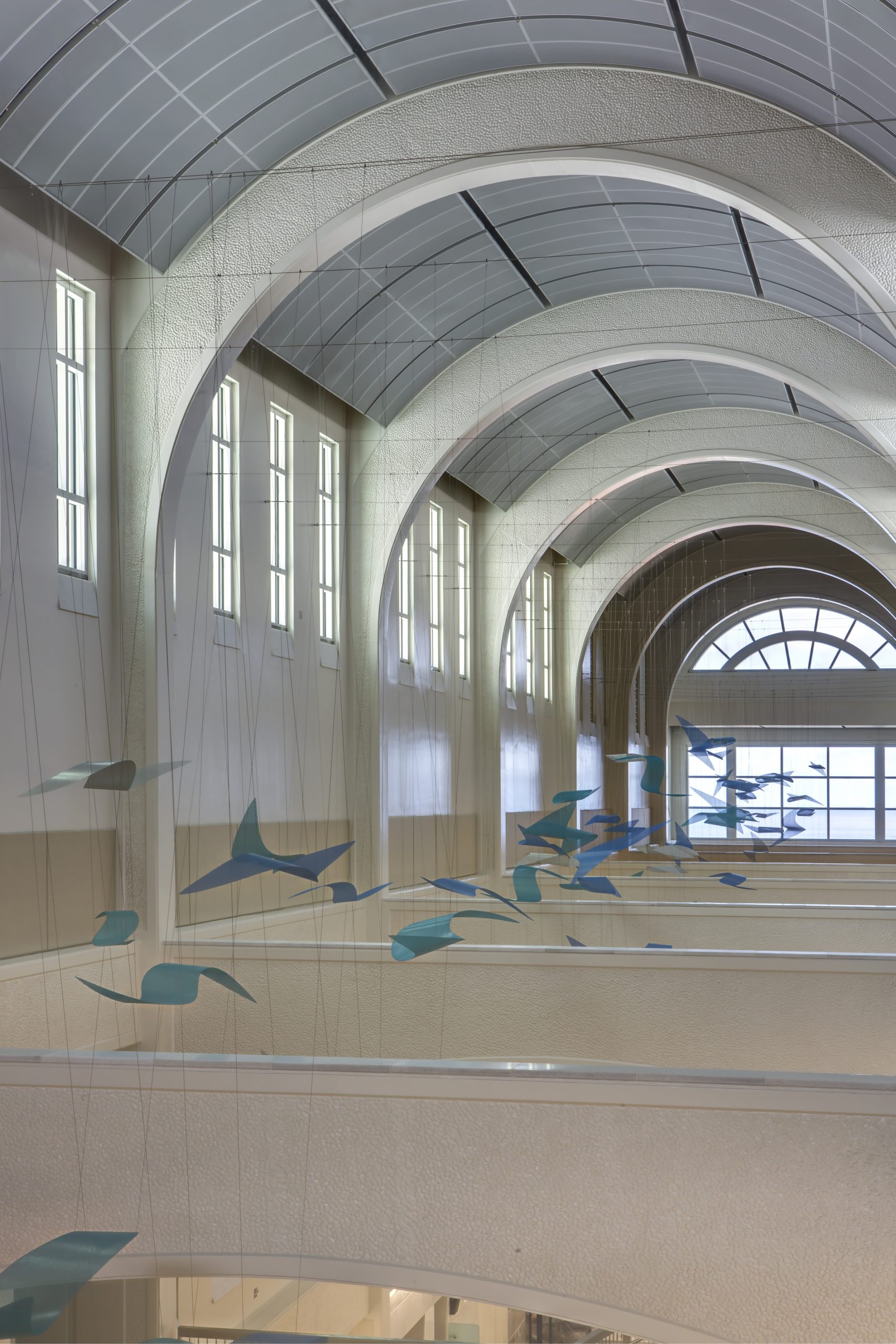 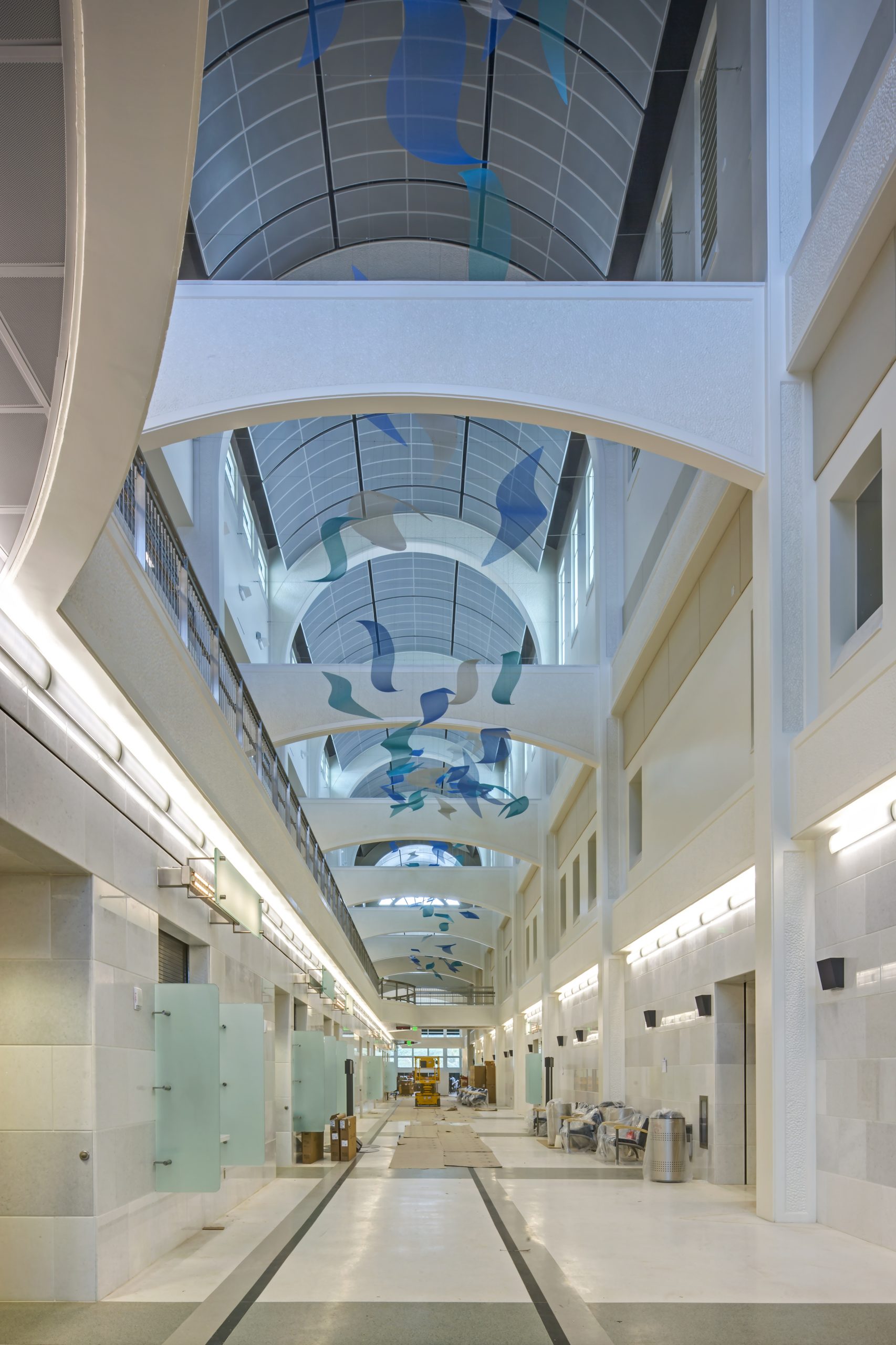 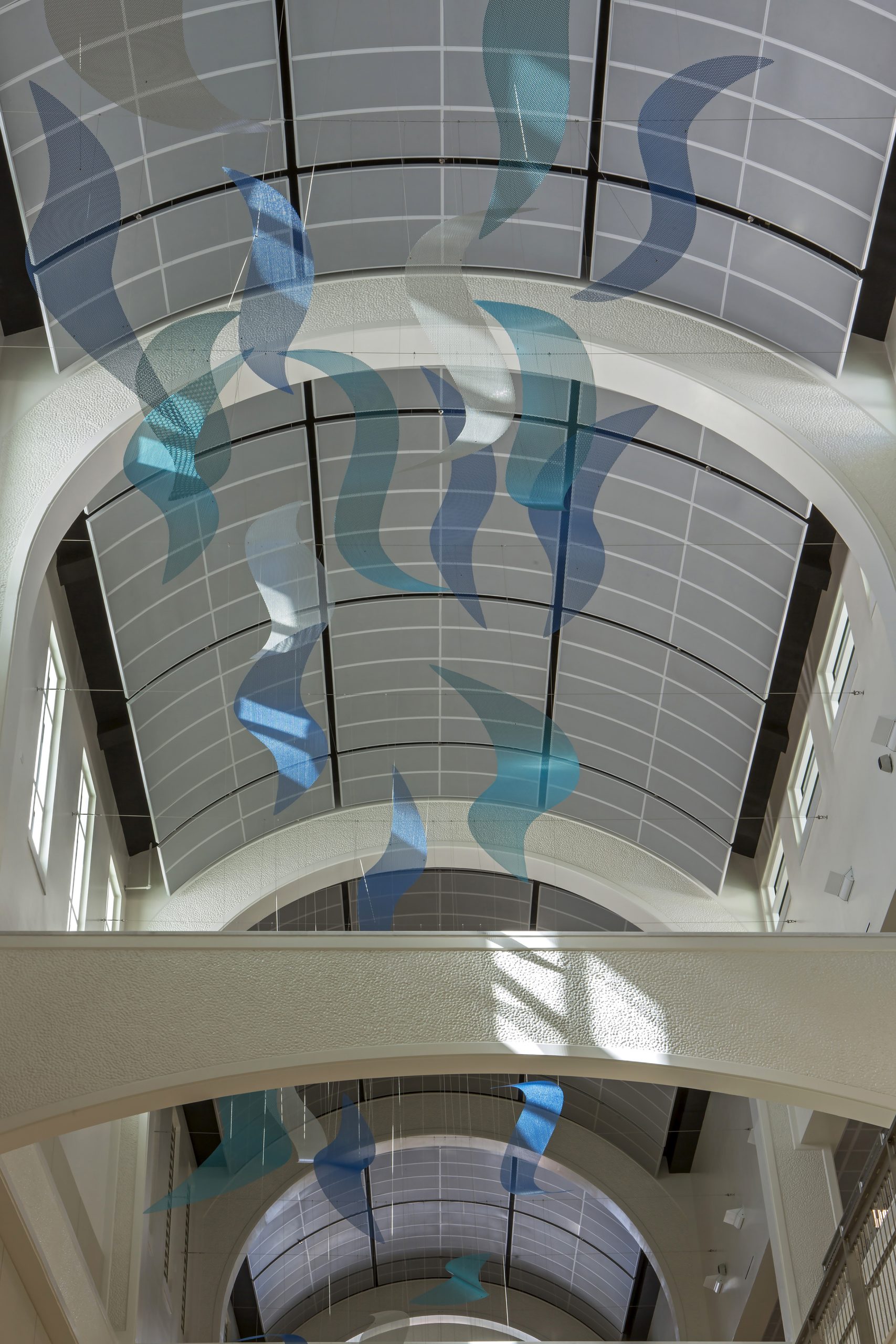 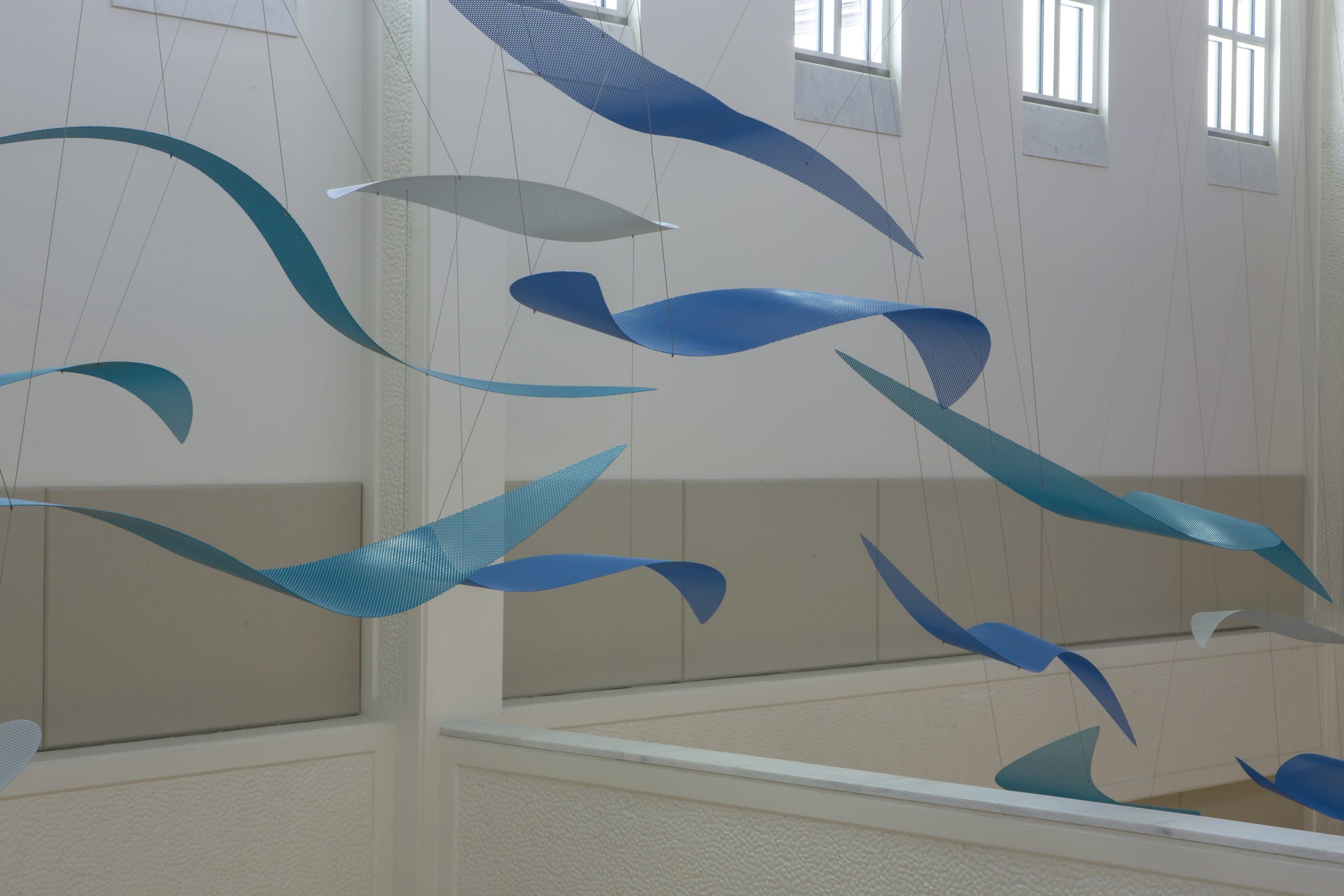 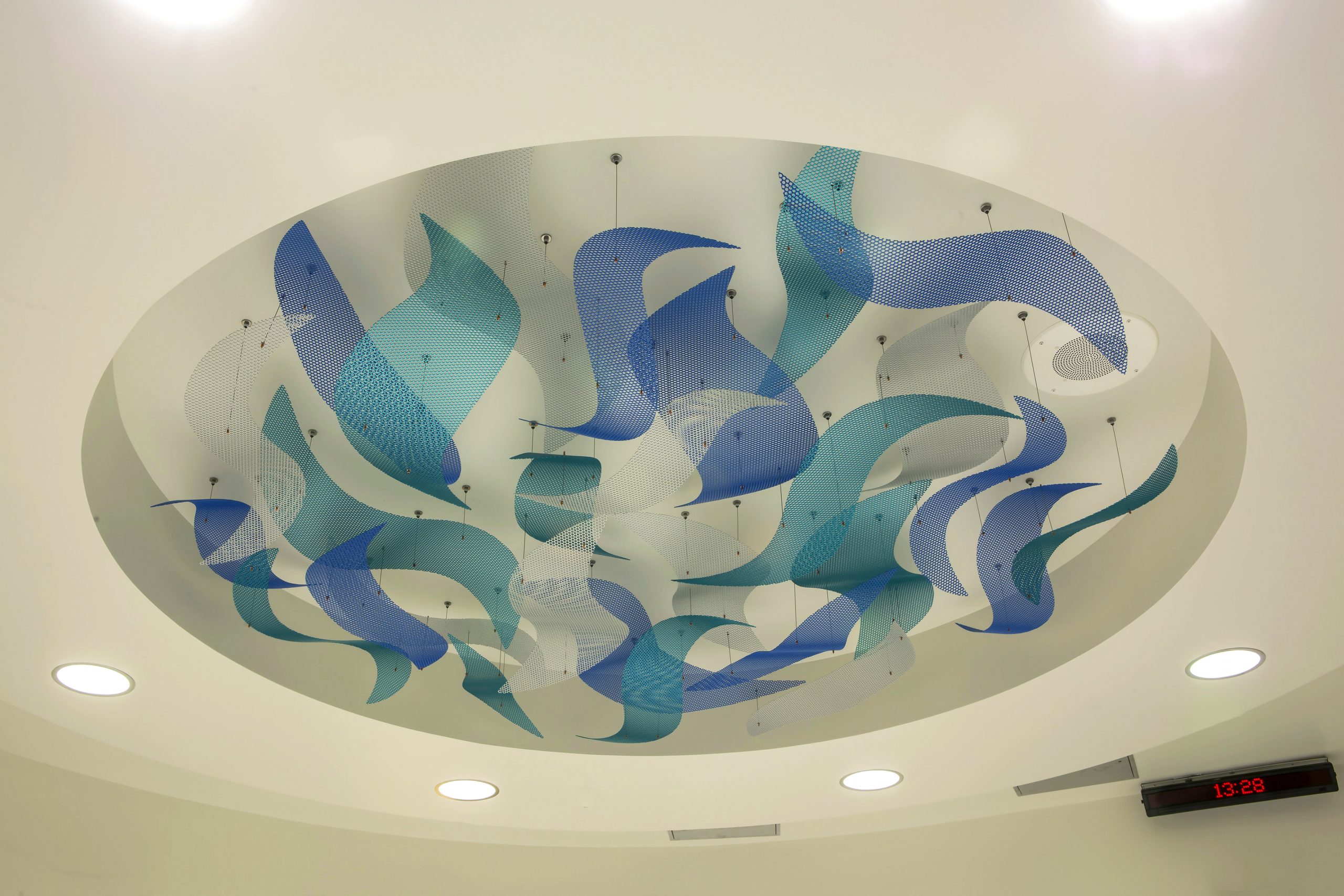 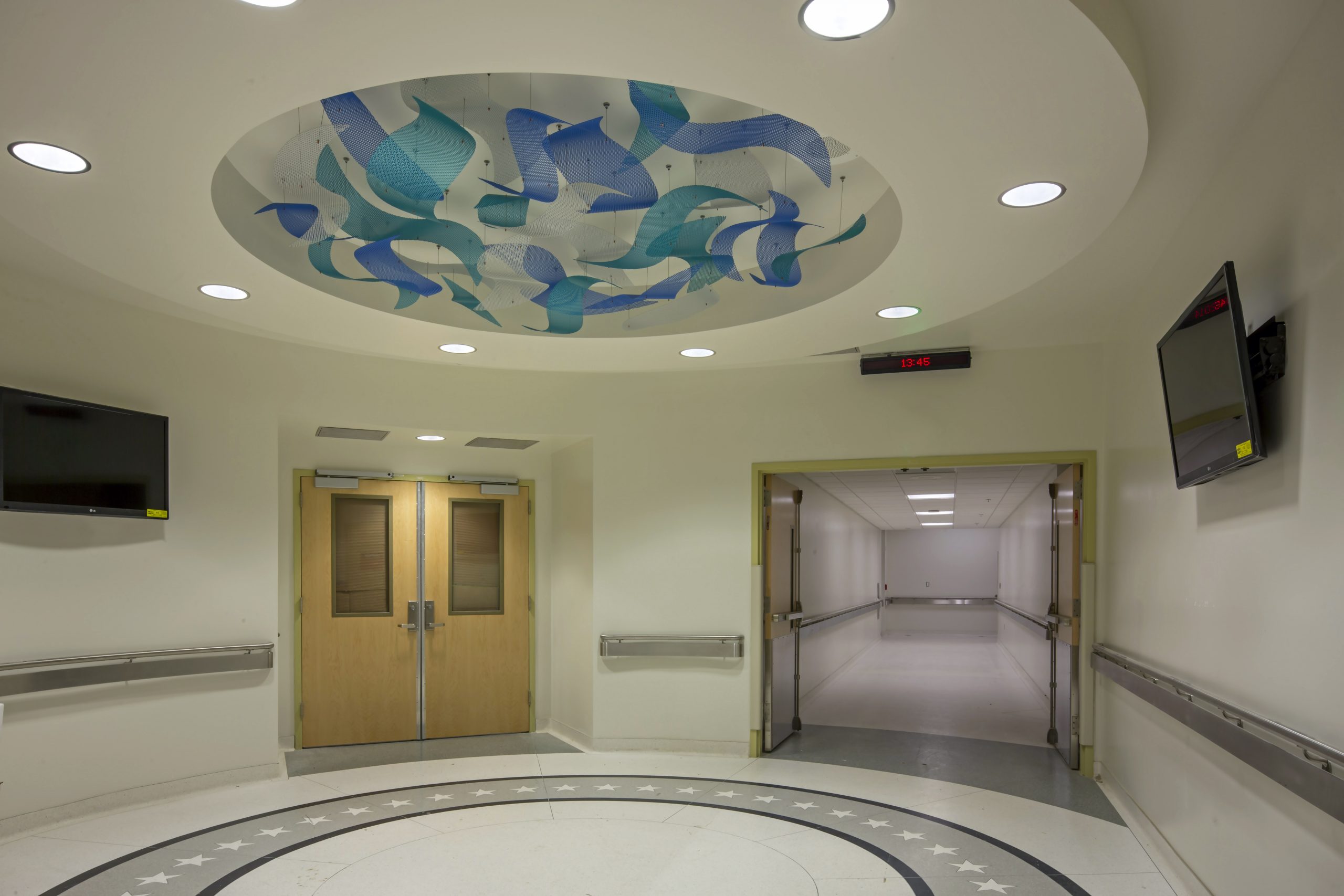 In March of 2013, Art Consultant, Janet Van Arsdale of JVA Art Group, San Diego, called saying she was recommending us for a commission for a new US Naval Hospital in Guam. They were looking for a suspended sculpture for a 200’ L x 25’ W long atrium, and one for a 7’ diameter rotunda. Hospitals nationwide have come to see art as a healing tool, an important way to bring spiritually uplifting, positive feelings and hope to visitors, patients and staff. Art also signals a facility that cares about its surroundings and values quality.

The goals for integrating this project into the hospital were to conceive a concept and design that would resound with its occupants. The concept for the rotunda and long atrium is waves, a natural fit for a medical facility on a 30-mile long island in Micronesia, and the patients of which will be predominantly active duty and retired US Military personnel and family members. Years of duty on oceans all over the world mean these men and women understand the power and lure of the sea. Water, and especially gentle waves, can soothe the spirit and carry one far away from the present. Waves can create unheard sounds of movement of water and interest in their variations of color. They can cause sustained observation, looking for where they start and stop, where they break, how long they are and how they enable one to mentally “ride the waves” across long stretches of empty space. From the floor and balconies in this hospital, viewers will find all these phenomena in “Sea Change” and “Ripples”, hopefully helping to calm the waters they personally face in this medical setting.

Collaboration is key to the success of a project. After the sculptures were designed & approved and fabrication was underway, the complicated process of working on installation plans began. With a 14-hour time difference, the Guam project required both stateside and long-distance communication with the procurement firm outfitting the hospital. From its president, to designers, project & field managers, director of operations, and financial officers, to the Navy's Project Officer and other personnel, there was extensive cooperation. The installation crew from Las Vegas worked closely with the artist and the lift rental company, which provided an aerial lift that was shipped to Guam in a container because there was no lift on the island that could operate so high for indoor use. The structural engineer, having worked with the artist before, provided invaluable reports for the Navy and installers regarding suspension systems, hardware, and weight loads. All of these entities working together, over a year's time, helped to bring the beauty, serenity and sense of bringing the outdoors inside to the new US Naval Hospital Guam. These artworks were funded in full by the US Government.