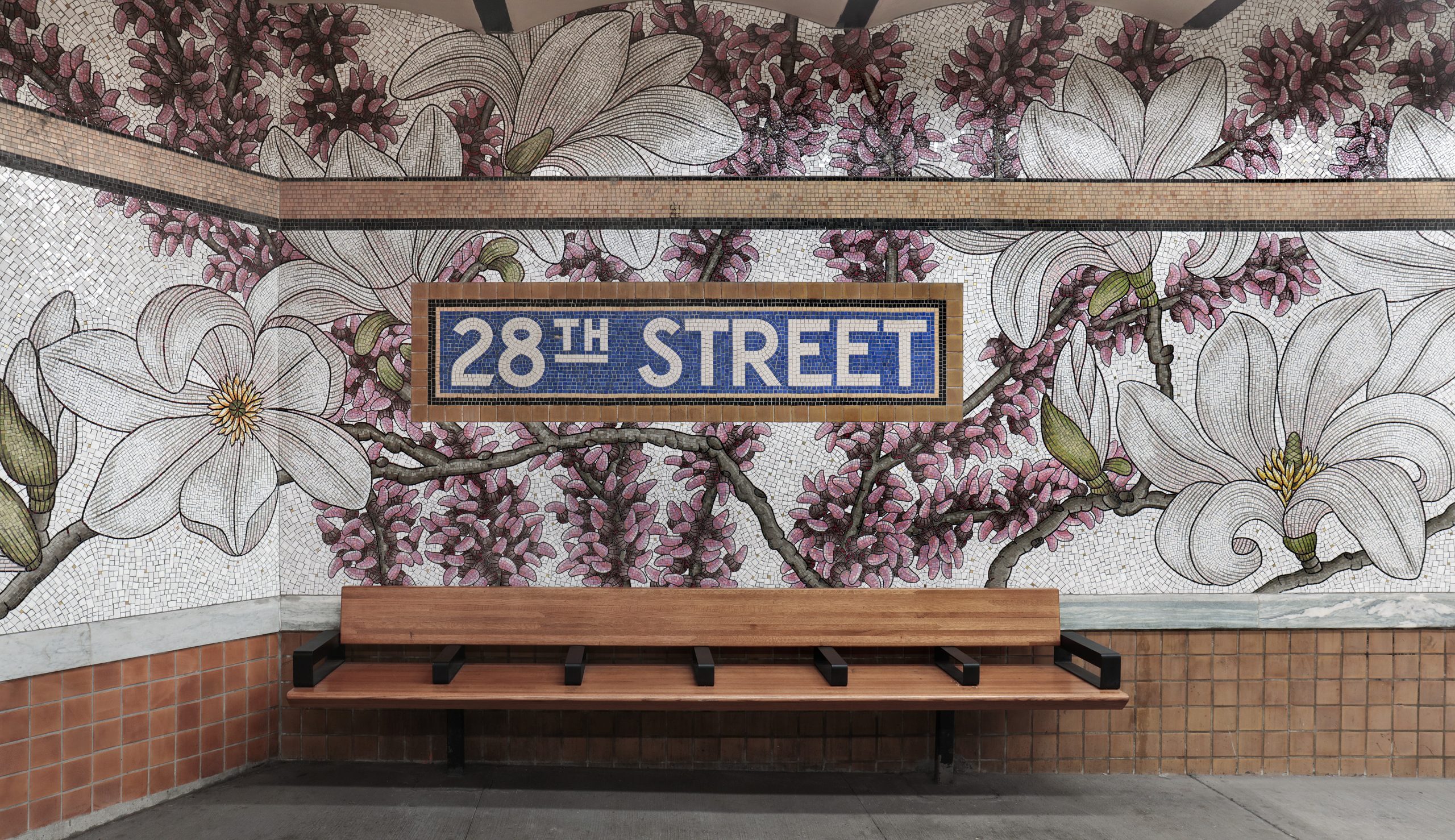 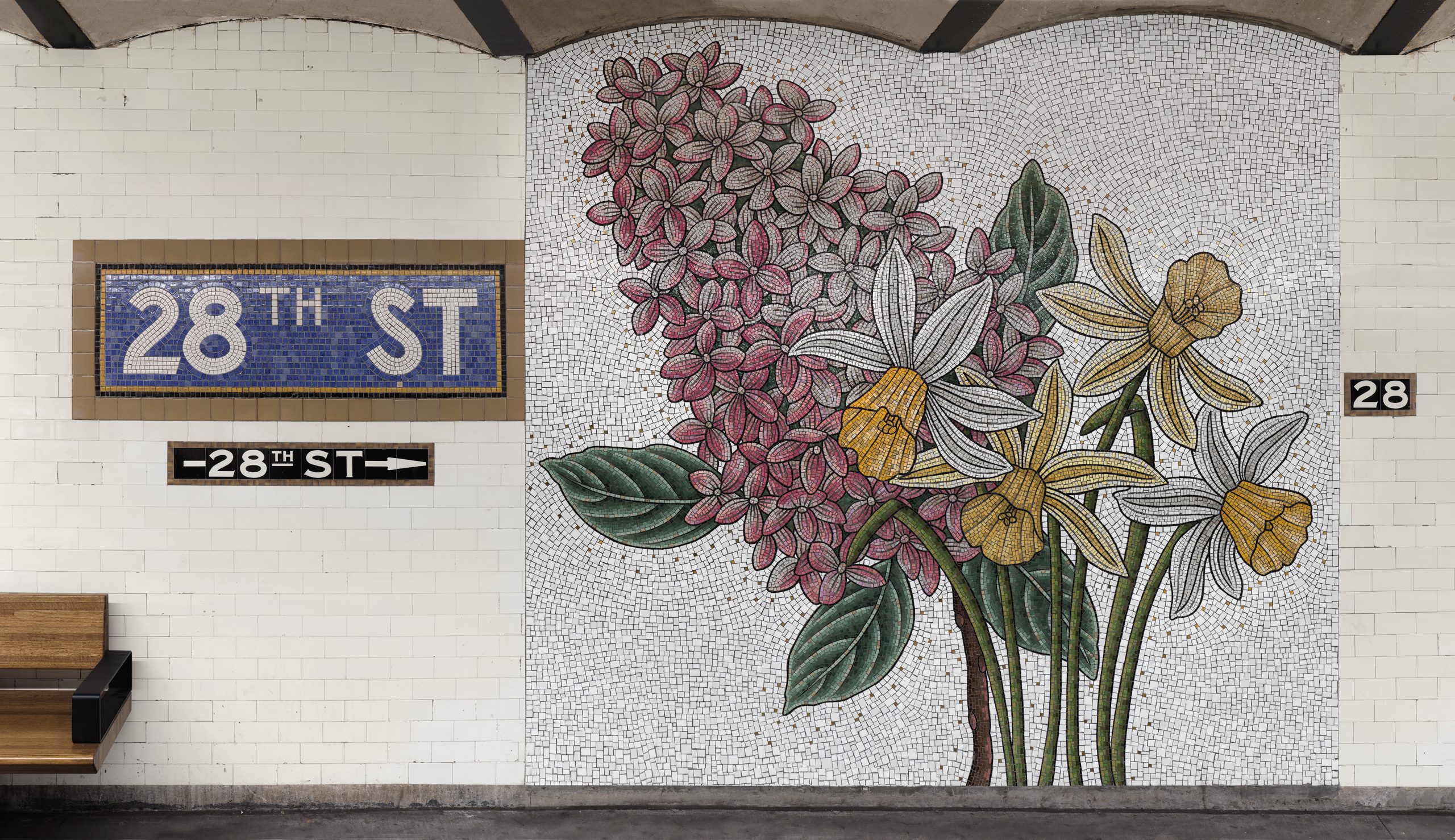 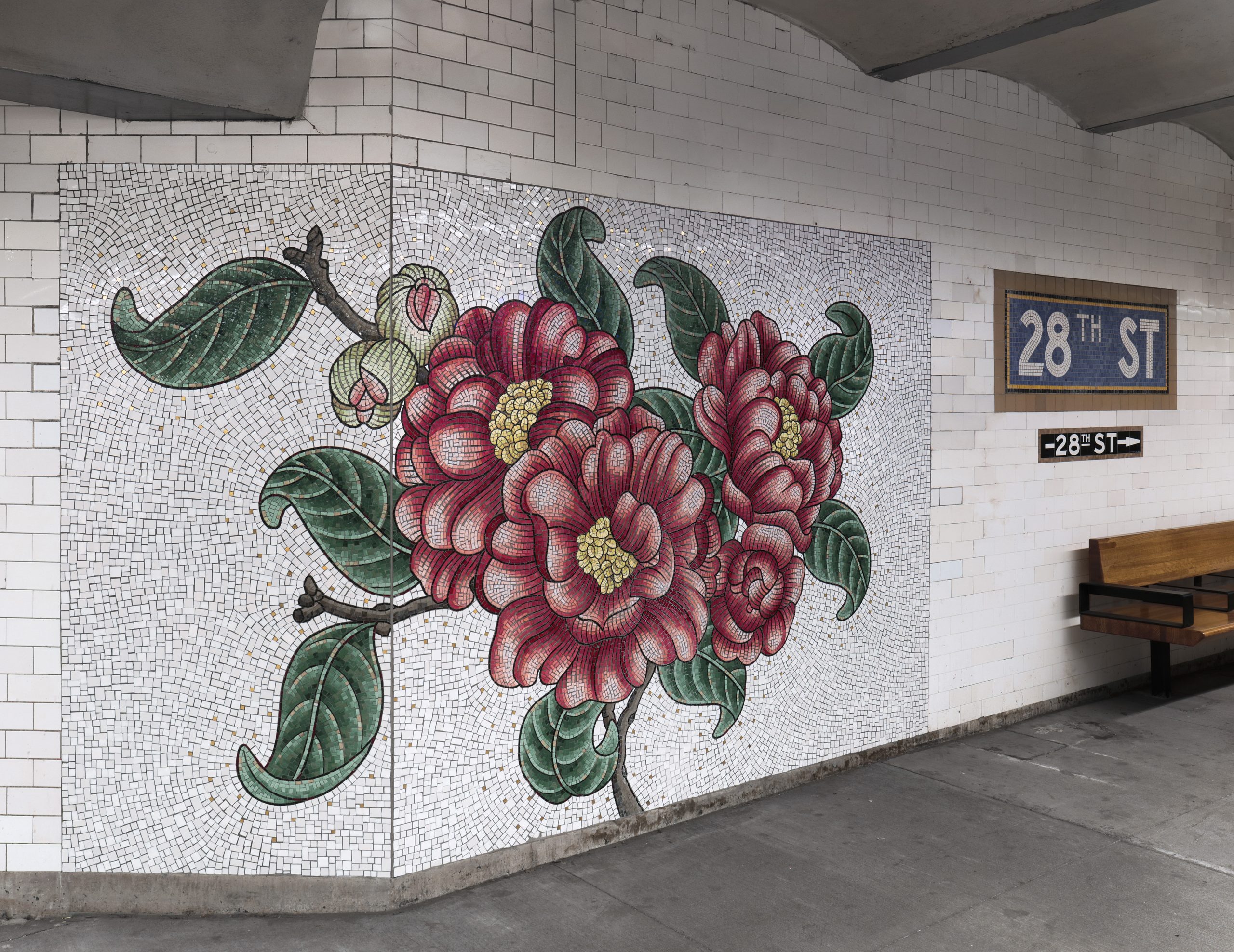 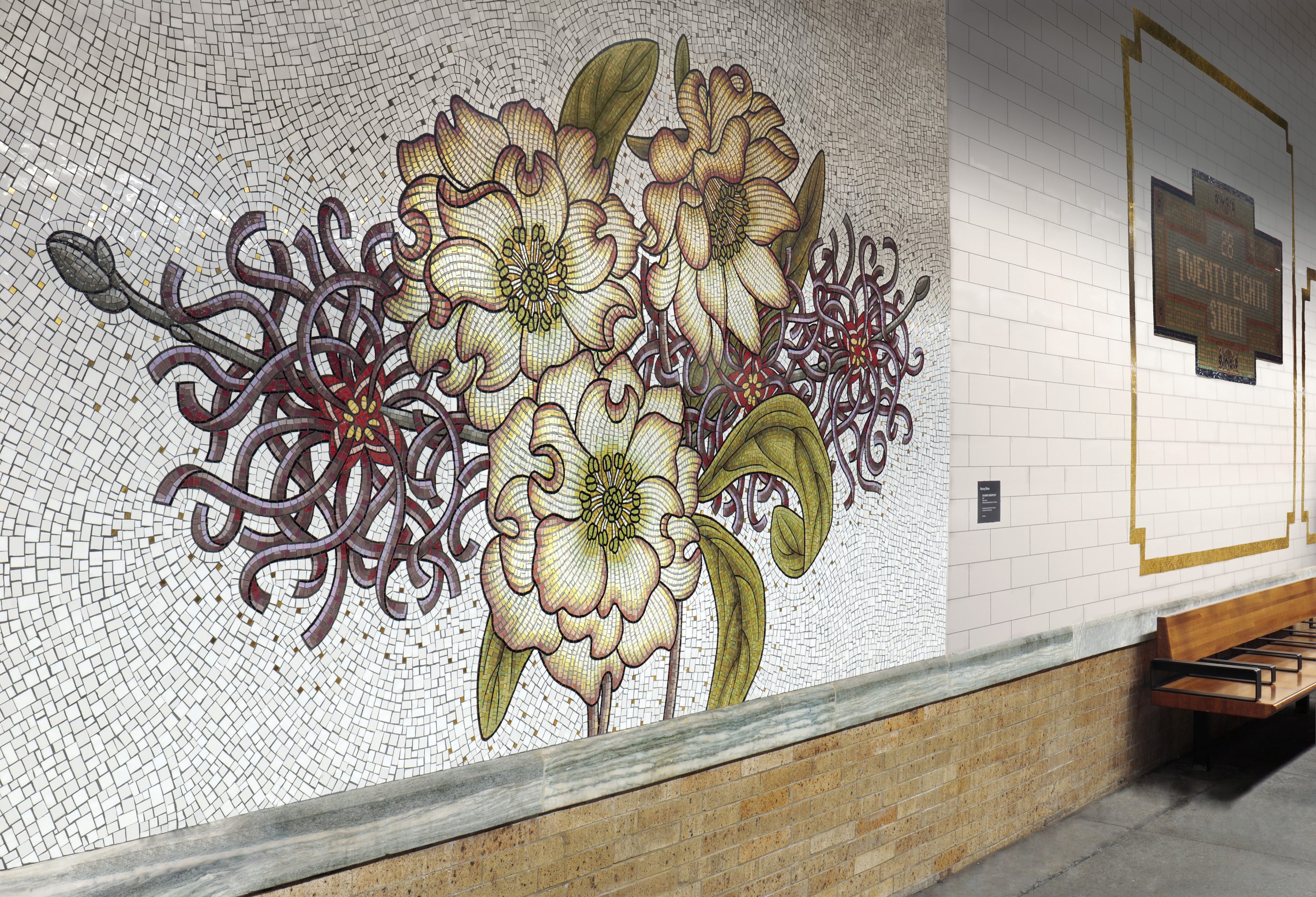 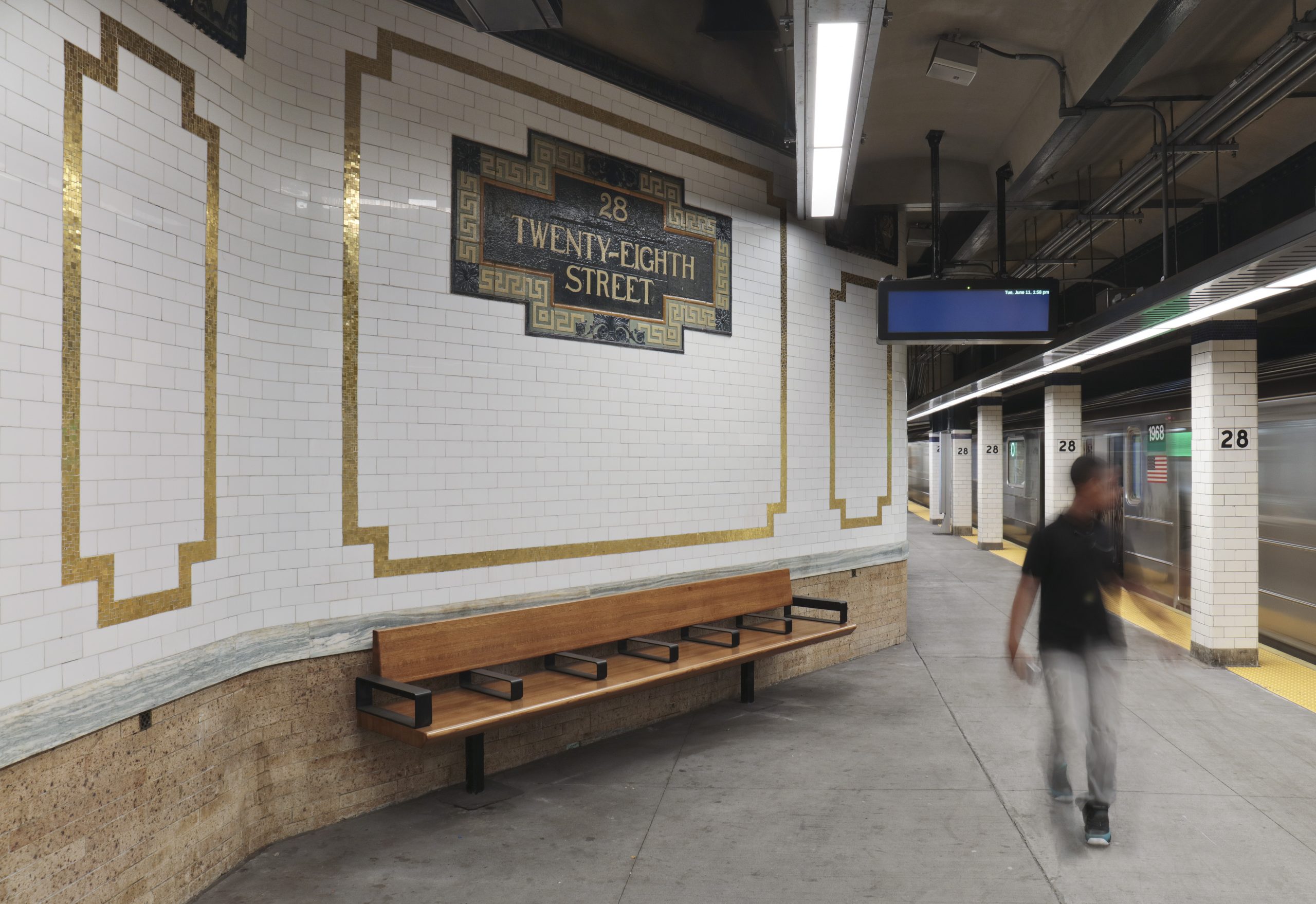 Roaming Underfoot is the title of 6 distinct Italian glass mosaics totaling 80’L x 9’H installed in the MTA 28th Street subway in Manhattan on the uptown and downtown 6 train platforms. I was chosen to place artwork on the walls of the historic station, originally opened after the turn of the last century, during its recent renovation. This eastside train is located minutes away from Madison Square Park Conservancy, a true gem of the city. My design depicts seven flowering plants that form the foundation of the conservancy’s perennial collection and were chosen for their ability to meet the changing climate conditions of the city. Along the platforms, passengers find large, colorful, entwining depictions of red buds, magnolias, hellebores, witch hazel, daffodils, hydrangea and camellia. These images are designed to bring the magic of the park itself, regarded as an urban sanctuary, to the riders once they descend underground. The mosaic flowers were created on a scale that allows the riders to have a bodily relationship with them functioning as beautiful inhabitants of the subway and breathing their ‘fresh air’ onto the platform; lifting spirits and reminding us how beneficial riding the subway actually is for our natural environment.

Due to the historic nature of the station, I had to work with walls that were already compromised and in need of new treatment. I chose for the artwork to integrate historic mosaic banding that was from the original station. Rather than avoid this mosaic signage, I wanted the artwork to visually interact with it as it does in two instances. I also chose areas to add artwork that had heavy traffic – an exit to the renowned New York Life Building and a segment of the uptown platform where riders tend to congregate. I wanted the artwork to function for those waiting for or exiting the train as well as riders who are viewing it from inside the subway cars. In addition to adding these large botanical mosaics, sections of the platform walls that were tiled with original glass subway tile from 1920 were enhanced by new banding of gold glass mosaics significantly heightening the overall beauty of the existing architecture. The botanical mosaics are lightly sparkled with gold glass around each flower tying the entire station together. The subway art is already very loved and has been declared the ‘most instagrammable’ subway in the entire NYC subway system.

As with any public commission, Roaming Underfoot went through a process receiving feedback from the MTA Arts & Design team as well as the deeply experienced mosaic expert Stephen Miotto of Miotto Art Mosaics whom I had collaborated with previously. Getting the artwork to reflect the quality of my drawings was of the utmost importance as well as making sure that my color choices translated accurately into smalti tile (a hand formed Italian glass of unsurpassable beauty). After drawing the artwork at 2/3rds scale, the drawings were sent to Travisanutto Giovanni Artistic Mosaics in Spilembergo, Italy where they were hand crafted by 15 mosaic artisans. Prior to their work beginning, I travelled to Italy to approve colors and approach and work proceeded from there. Once shipped back to the US as ‘puzzle parts’ the mosaics were installed by Stephen Miotto and team and the final mosaics were only unveiled at the end of 2019.