Rise of a Titan - CODAworx 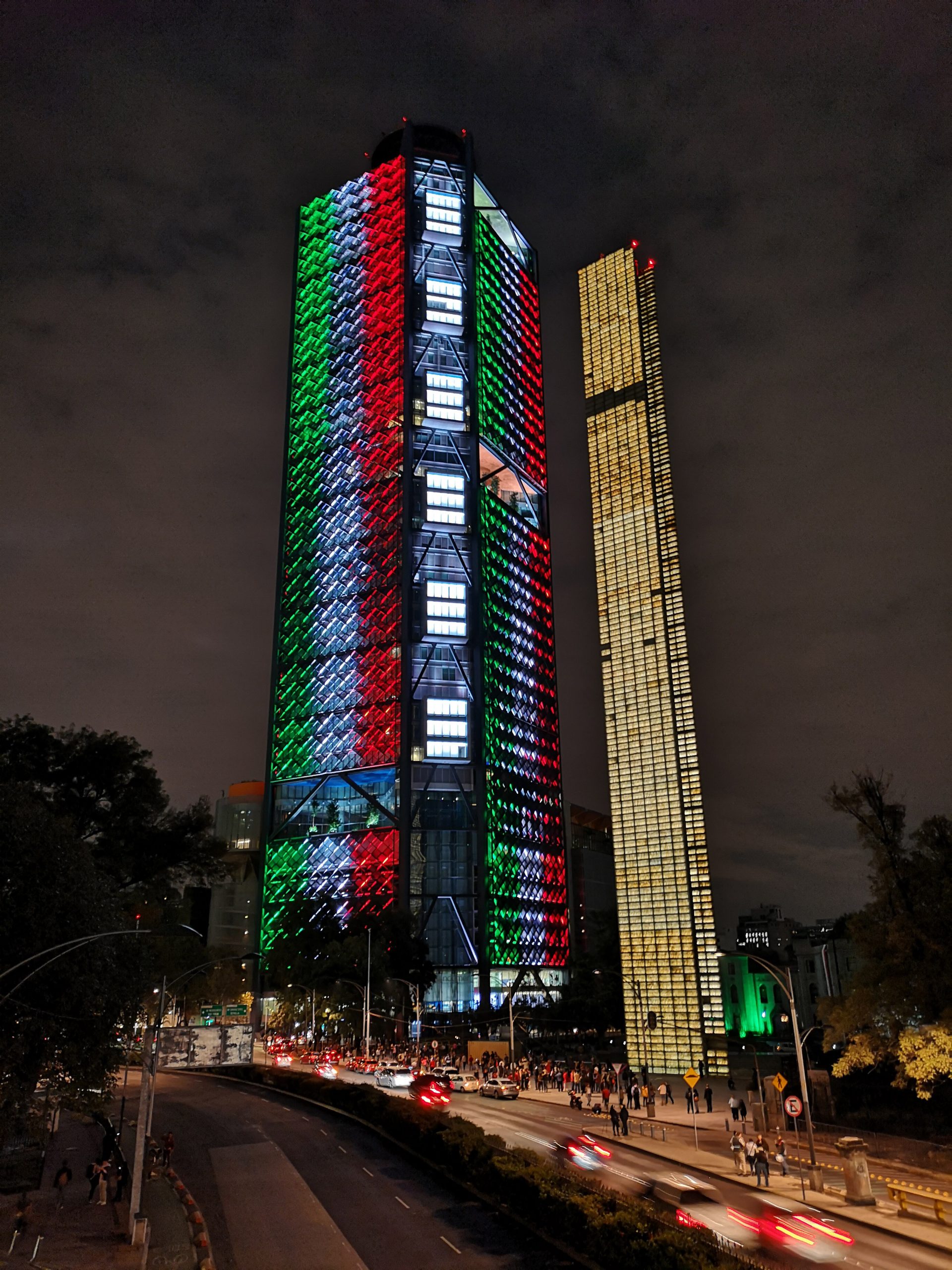 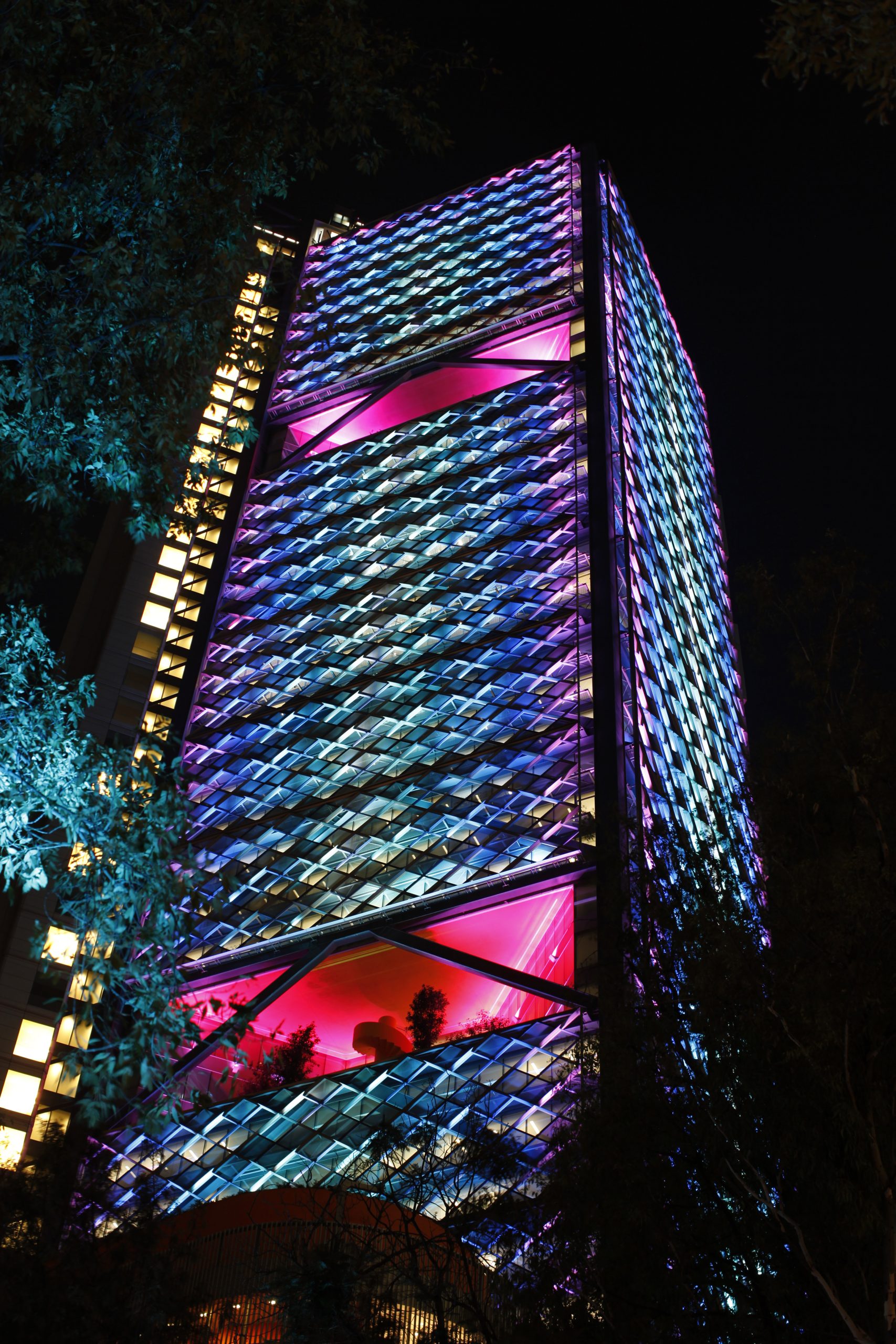 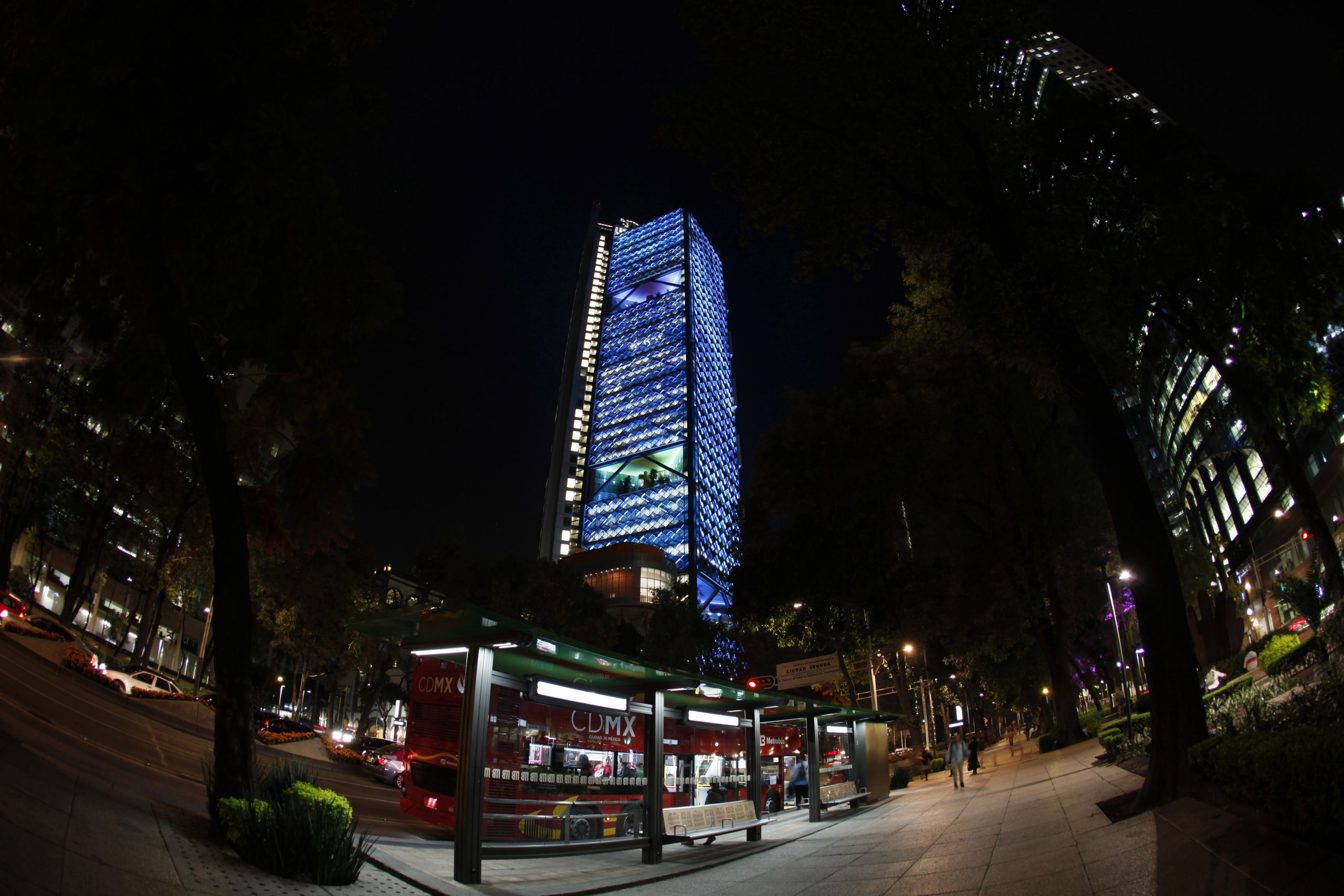 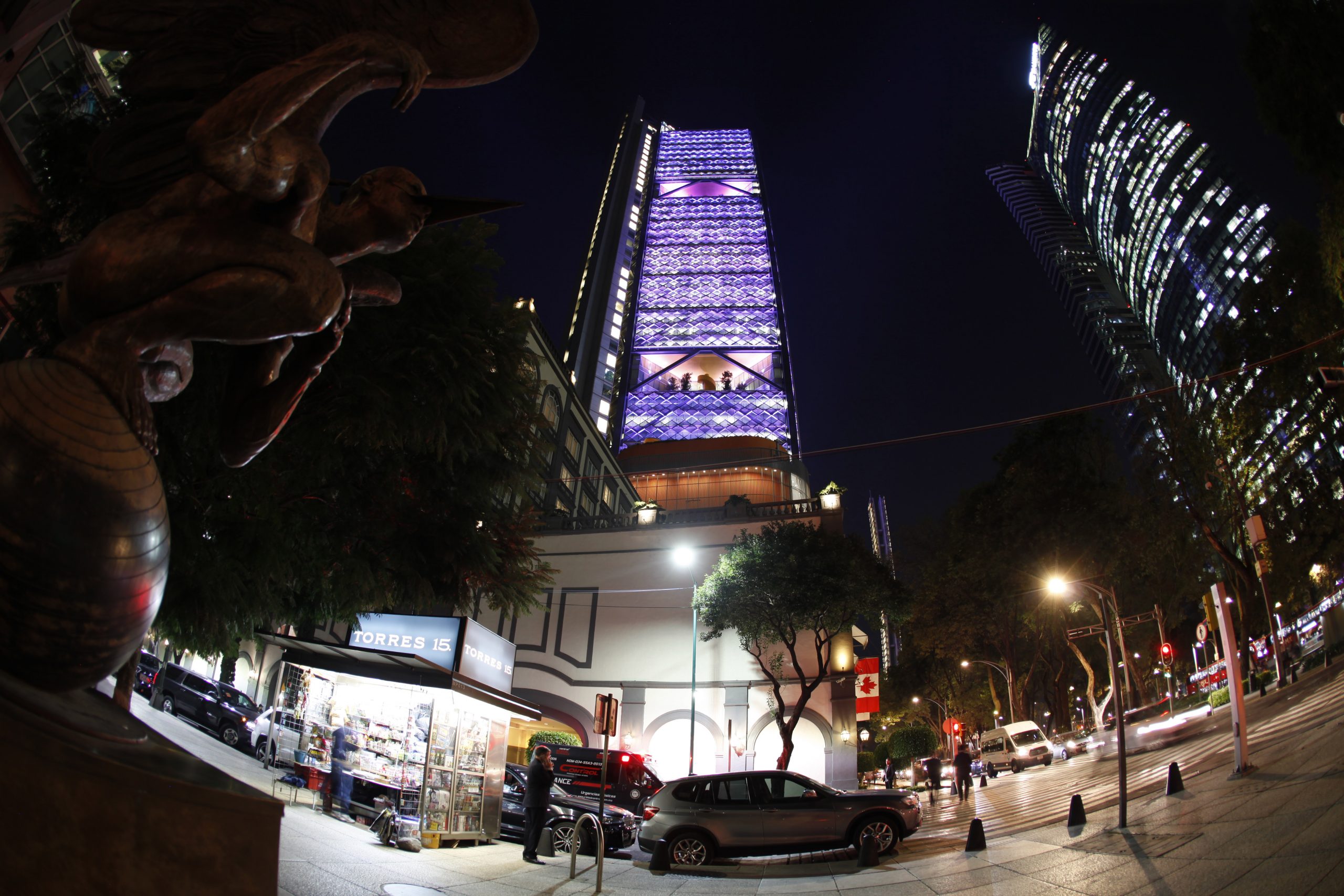 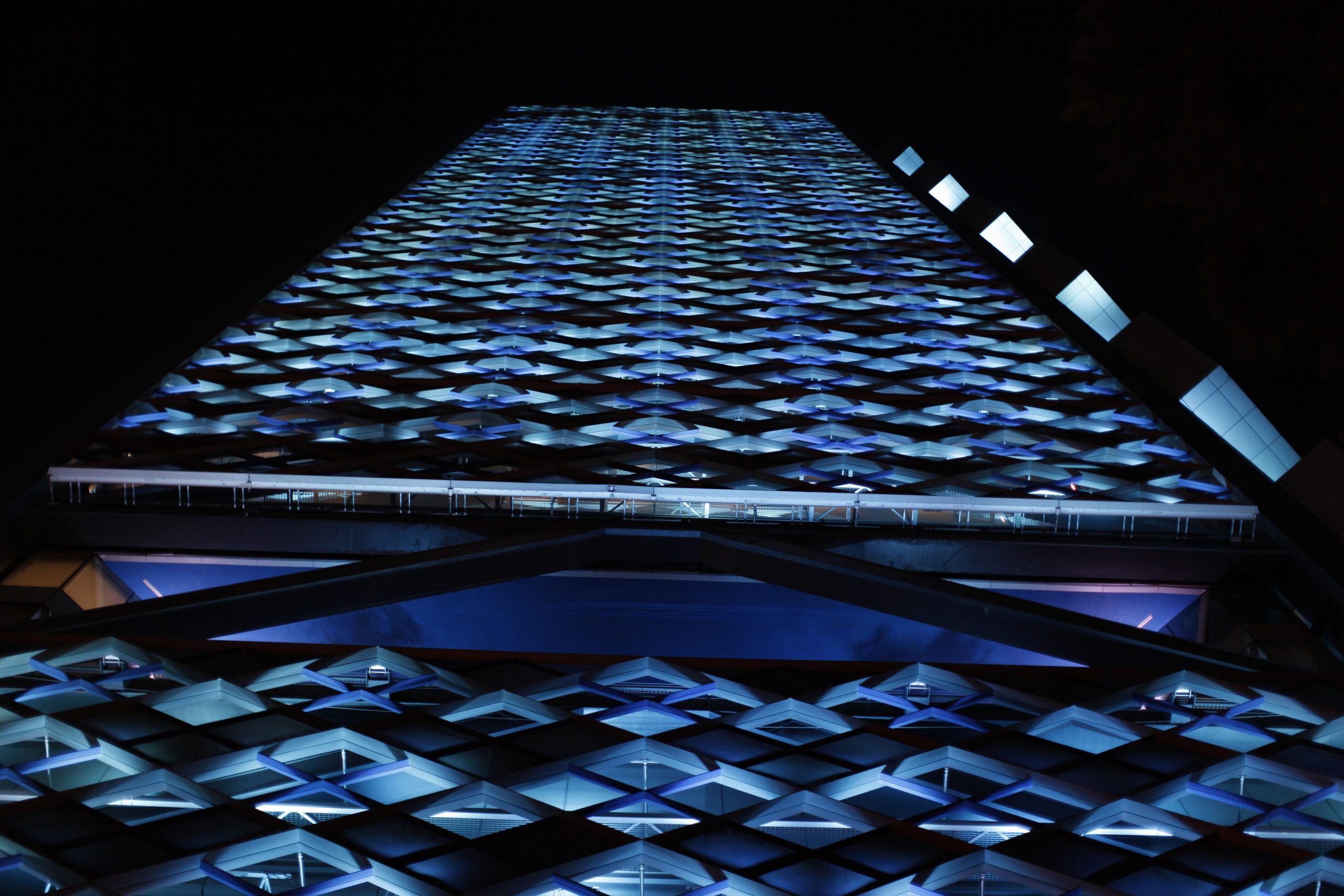 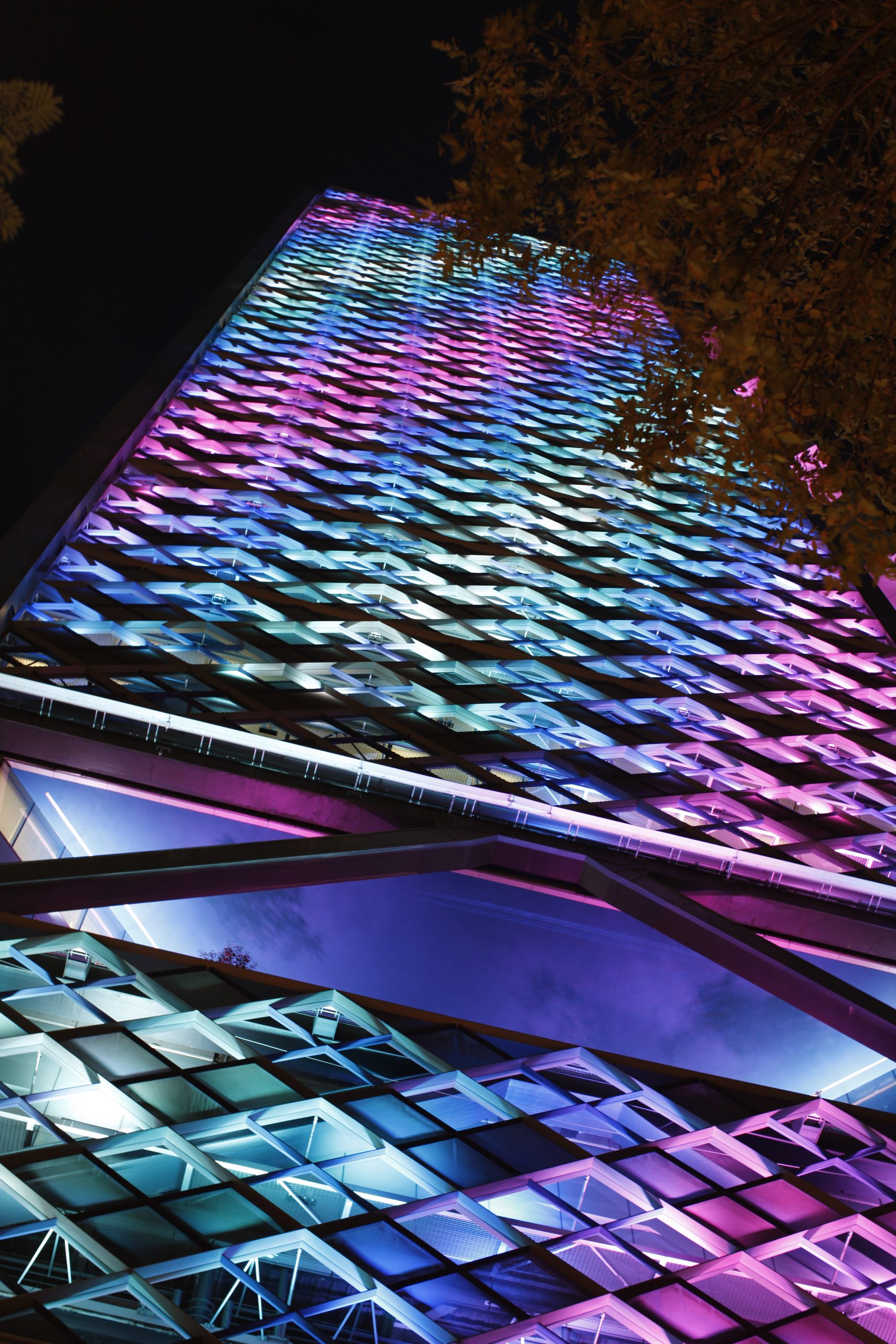 After the completion of one of Mexico City’s highest towers, the owner realized that one essential element was missing: light. The tower, nicknamed Titan due to its size and presence, had been carefully designed to stand out among the Financial District’s daytime landscape but it was disappearing at night. It was both a unique opportunity and a complex challenge to combine subtlety, art, and functionality. With a design including more than 3,000 luminaires installed on the 50-story façade, we managed to create a work of art that highlights the tower’s architecture while offering a personalized communication tool for the owner.

Inaugurated in 2016, this 768-foot tower is a landmark of Mexico City’s Financial District. However, it did not include any exterior lighting until 2018. Our team was asked to come up with an alternative solution to the one presented by the architectural firm in charge of the project.
The goal for incorporating art into this project became a twofold strategy.
According to Richard Rogers, chairman of the tower’s architectural firm Rogers Stirk Harbour Partners, "the facade draws on the heritage of Mexican architecture; the result is a reinterpretation of the distinctive texture of traditional 'celosia' screens". With the facade bearing such cultural importance in the design of the tower, our first goal was to honor this fine architecture through subtle lighting;
Our second goal was to turn the tower into a canvas for its owner to demonstrate commitment to specific causes, or to get involved with the city’s cultural events through art. This could be accomplished through programmed lighting scenarios.
Finally, we wanted to establish the tower as a nighttime icon of Mexico City’s Financial District skyline, transforming the tower into a visually stunning nighttime landmark for tourists visiting the city, while also catering mainly to residents.

Lighting design: the design highlights each detail of the mega-structures: lattices, mega-beams, main beams, and bracing. The main element of our design is the lattices’ lighting, converting the sun-protective double skin into a canvas of over 2,500 4” linear luminaires with 15ºx30º optical system, each controllable by foot. The installation was performed over a 4-month period.

Canvas design: While the final design focuses on the details of the architecture, the combination of the control system with the location of luminaires is done in a way that is similar to a pixeled-screen, making the switch from traditional to dynamic lighting easy.

Programming: Although the lighting design aspect of the project was key, programming is really what allowed originality and imagination to flow. Over fifty lighting scenarios have been designed and delivered to accompany a calendar of cultural and corporate events defined by the owner.
As an example, the inaugural event was based on a 2-act show under the themes “Architecture” and “Mexican heritage”. This 5-minute light show created for Mexico’s Independence Day slowly revealed the details of the tower’s architecture in its first phase, before depicting history through Mexican symbols.

From honoring Breast Cancer Awareness Month, to announcing the start of a local marathon, the designer’s proposal includes specific scenarios based on an annual calendar, which makes the tower an integral part of the city residents’ lives.