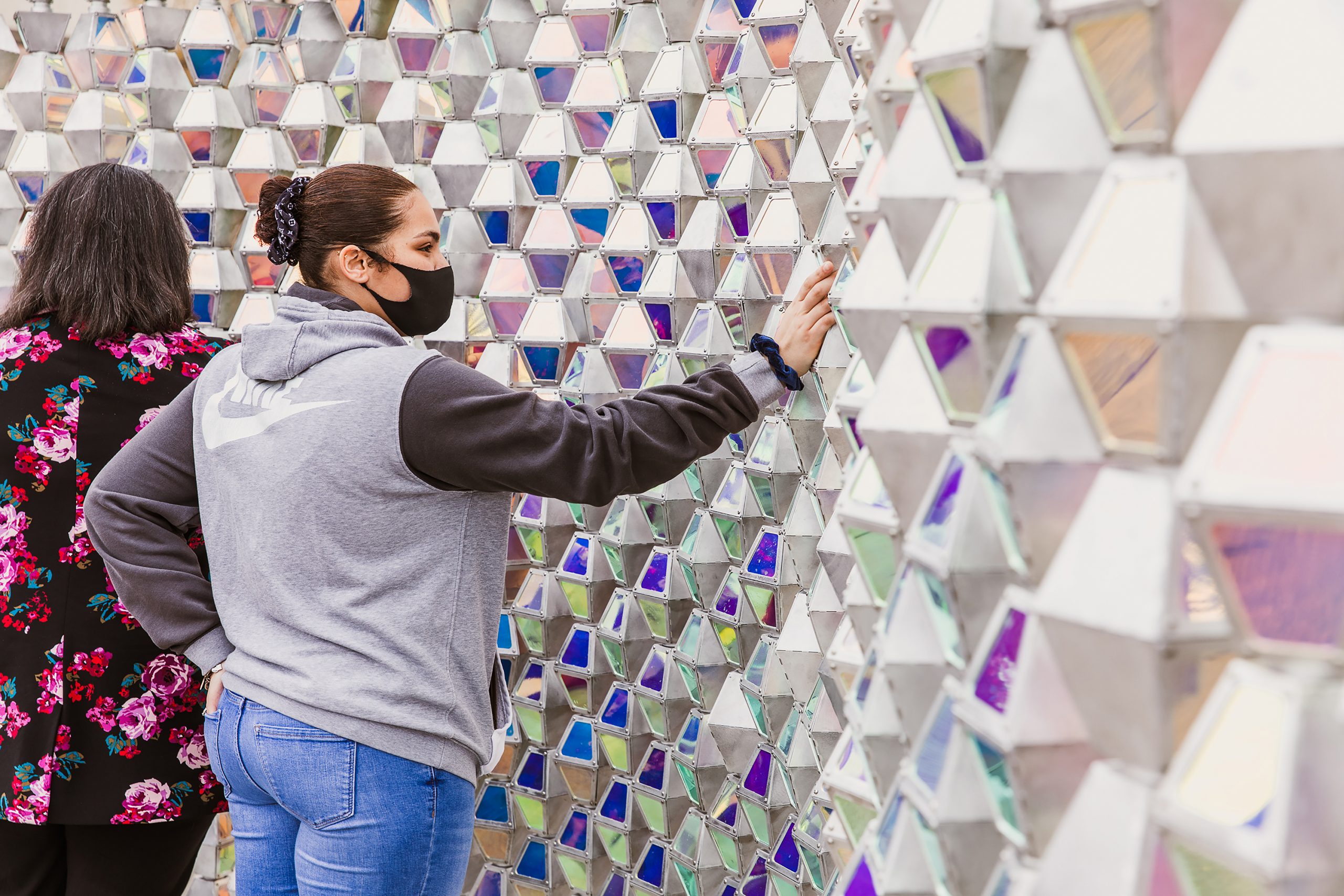 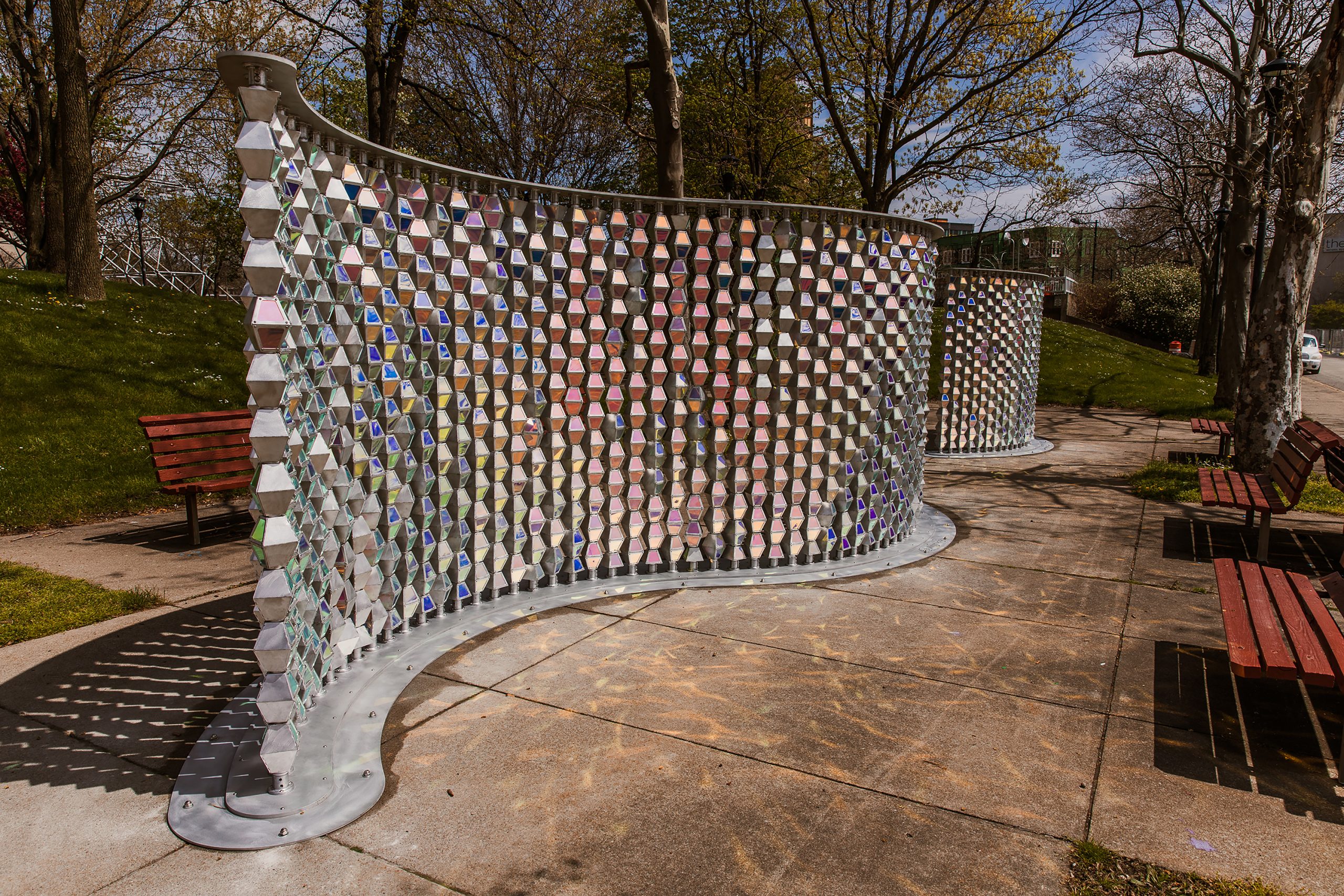 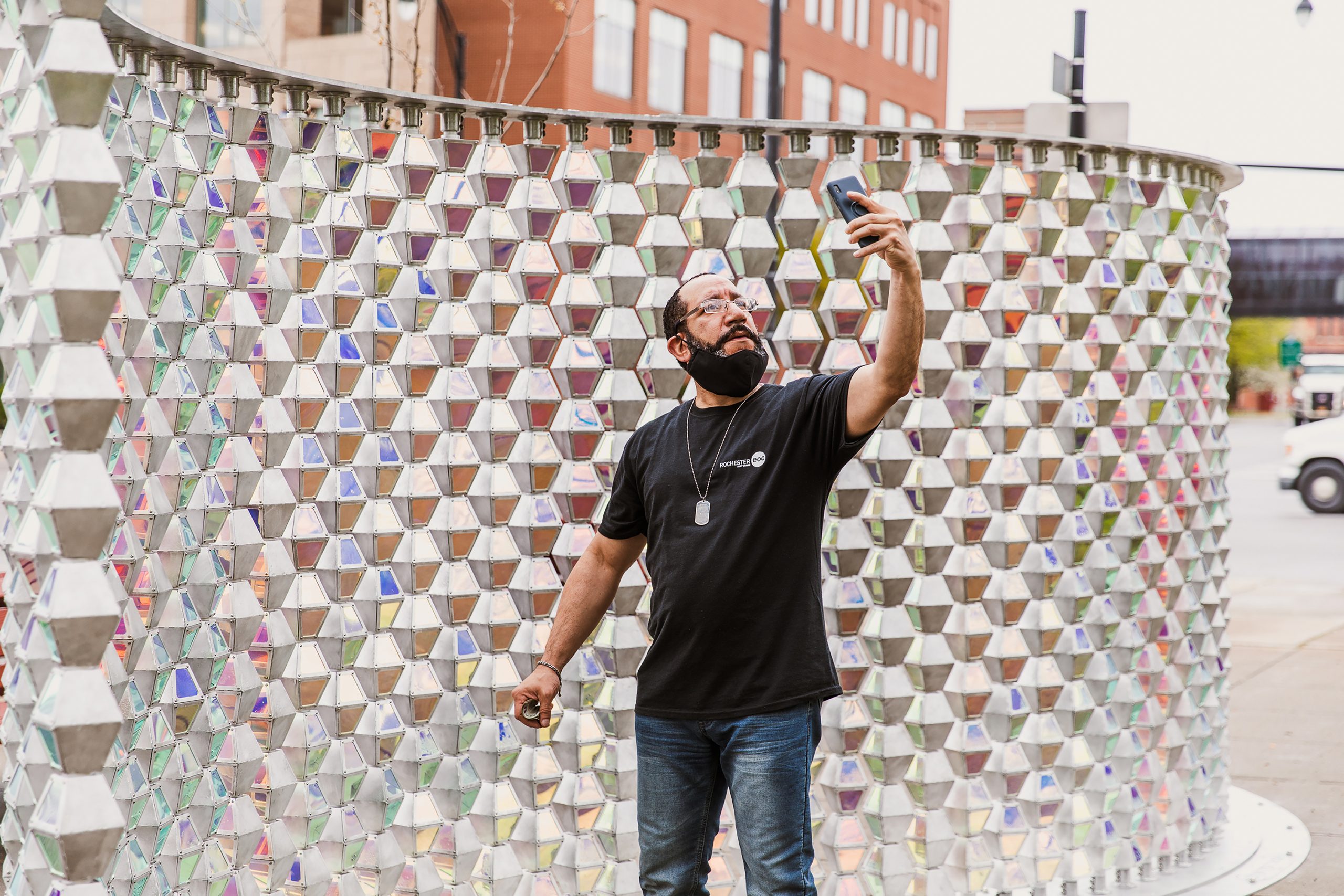 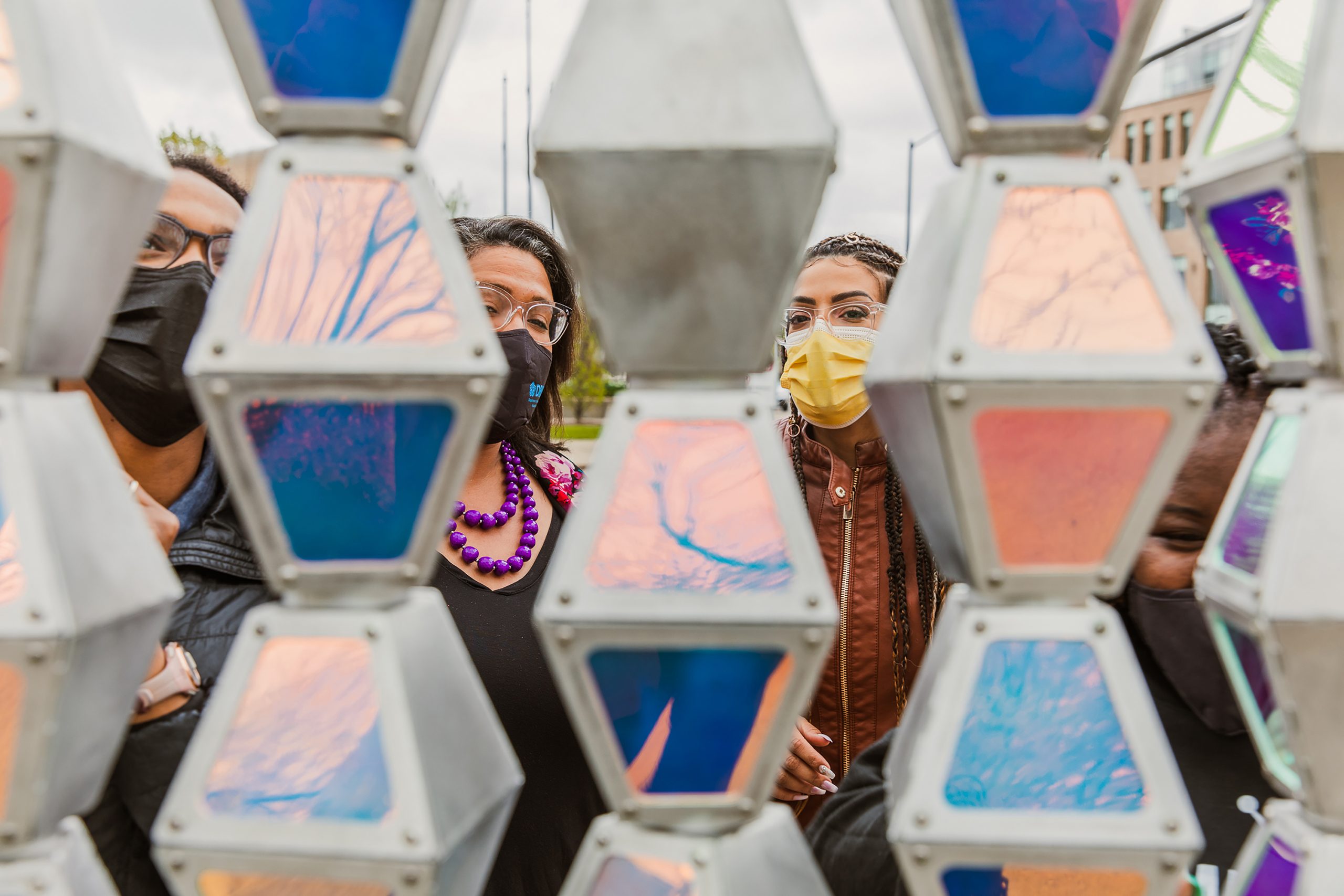 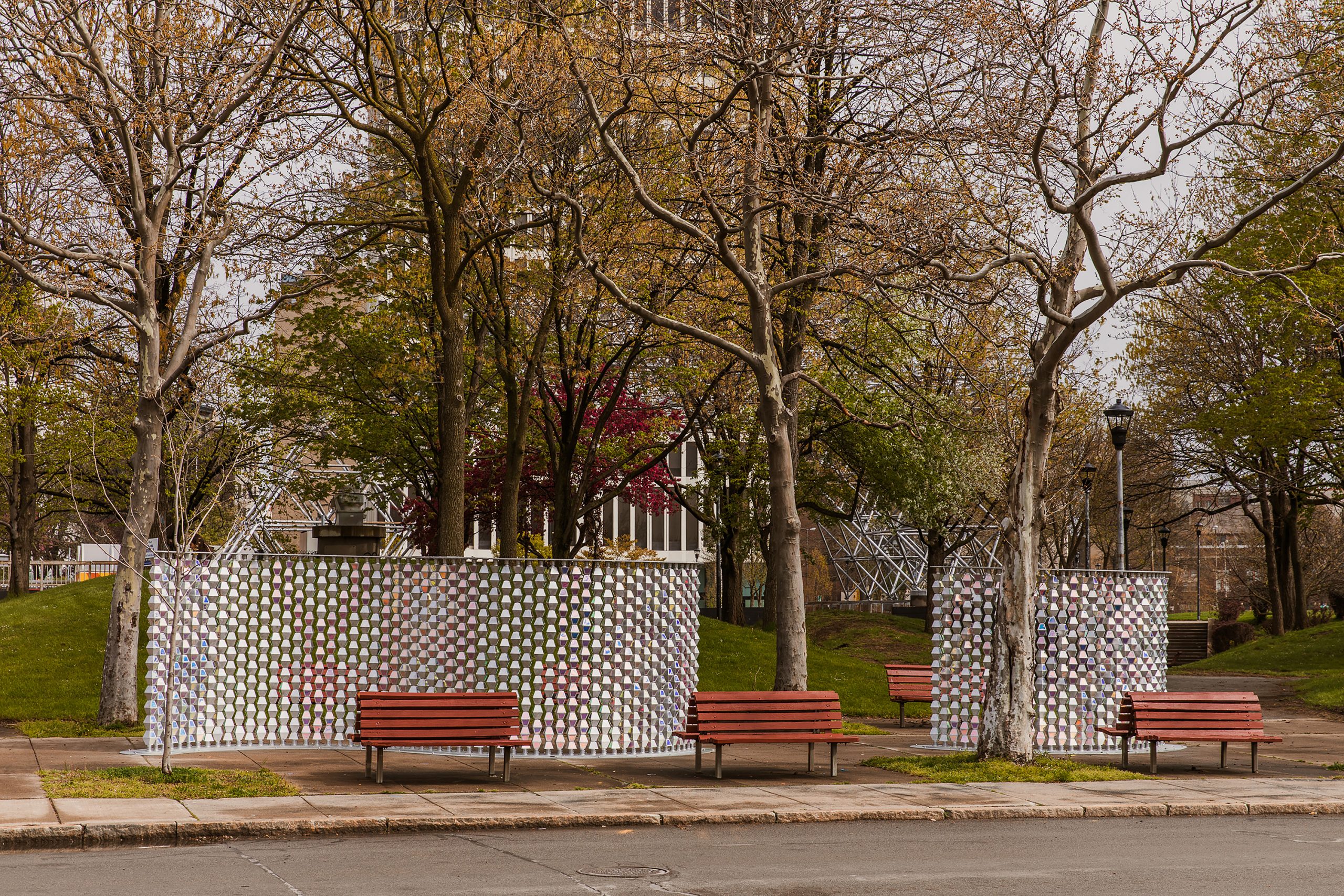 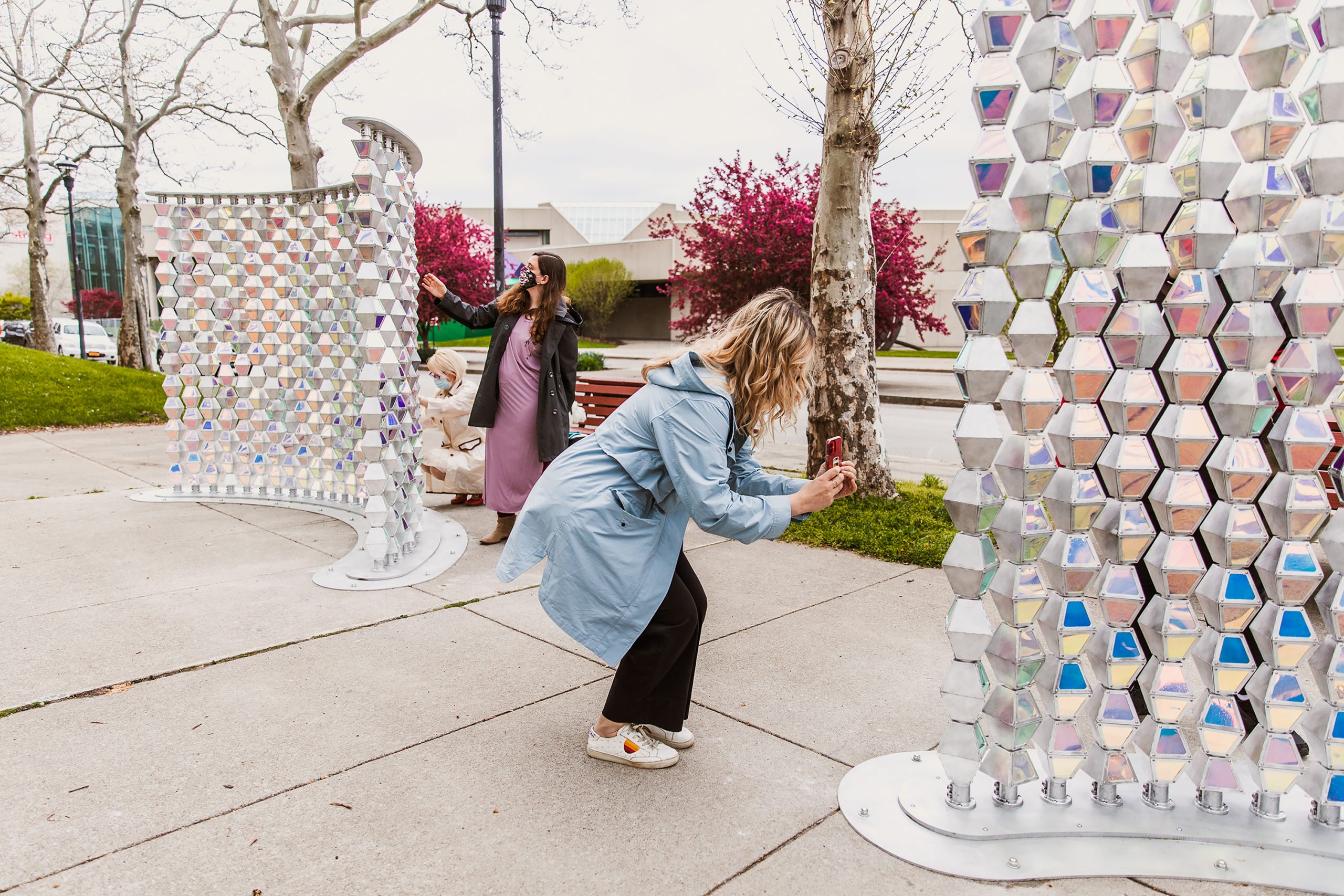 Ripple is an ever-changing landmark designed with the community that responds to the people, the landscape, and the interactions between them. The intervention was created for the community by the community to act as a playful catalyst for breaking down social barriers and connecting people within the public realm. The design was inspired by the flowing movement of the Genesee River, the main artery running through the center of the city that serves as an integral part of the city’s history. Its unique flowing form creates opportunities for a variety of social interactions to happen within the space. The iridescence of the piece mimics the effects of rippling water while reflecting each person and their identity onto the work itself. The reflection and refraction of the surrounding context make the work come alive as people move through and by the space. The piece contains 1200 custom units, which were influenced by the form and clustering of the lilac, Rochester’s well-known flower. Each of these units acts as a pixel that individuals can rotate, becoming a message board for the community. It becomes a timeless open-ended playable platform for the community to put their own individual identity onto the work and the space.

Ripple was created as a part of an ecosystem of multi-scaled playable interventions being implemented within the City of Rochester that connects the Genesee river with the city center. The work provides an ever-changing communal landmark at the edge of Manhattan Square Drive and entrance into Dr. Martin Luther King Jr. Park. The piece uses play as a tool to begin to break down barriers and bring people together within the public realm. It becomes an inclusive platform for playful expression within the public realm that gets people to stop and engage not only with the work but with each other. The piece is always changing and adapting to the people using it, the changing seasons, and the shifting landscape around it creating new experiences and memories each time someone passes by it. The work becomes less about itself and more about the relationships, conversations, and connections it sparks through these moments of play. It begins to showcase the value of play in everyday spaces and its impact on creating more social, healthier, safer, and inclusive cities.

Ripple was created with the community of Rochester, NY, through a series of participatory design workshops with local youth groups, community advocates, and city stakeholders. The Urban Conga used various play methodologies during these community engagement workshops to ensure the quiet person in the back had as much of a voice as the loud ones in the front. Every component of the design from the connection to the river to creating an ever-changing photogenic moment was driven by the discussions and feedback from the community during and after these workshops. The dialog with the community and stakeholders continued throughout the entire process. In order to create inclusive work that generates communal ownership, it is vital to have the community as a part of the process from the beginning and throughout the project. The open-ended nature of Ripple allows for each person to put their own individual identity onto the work and leave a piece behind on the work as well.