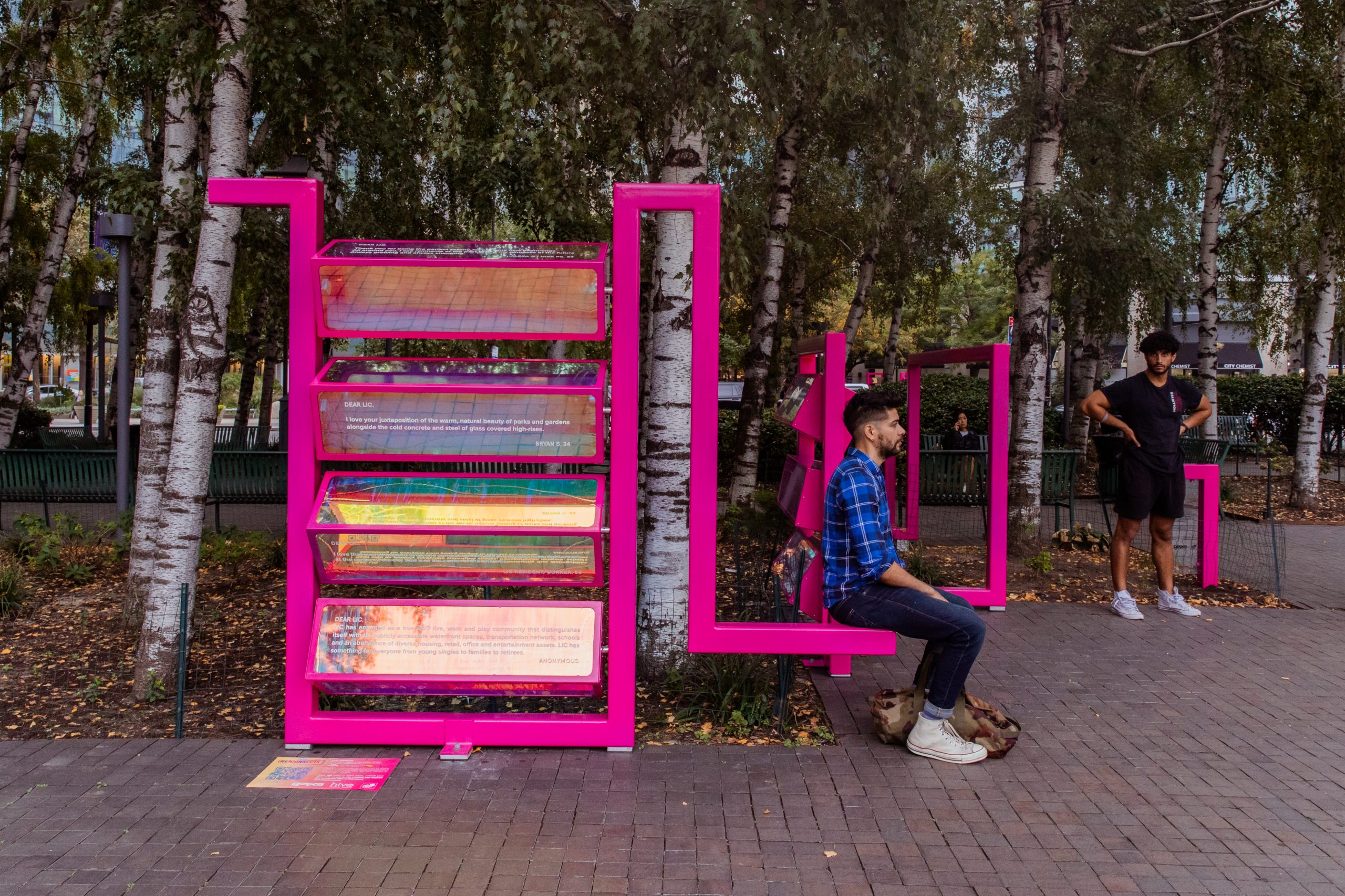 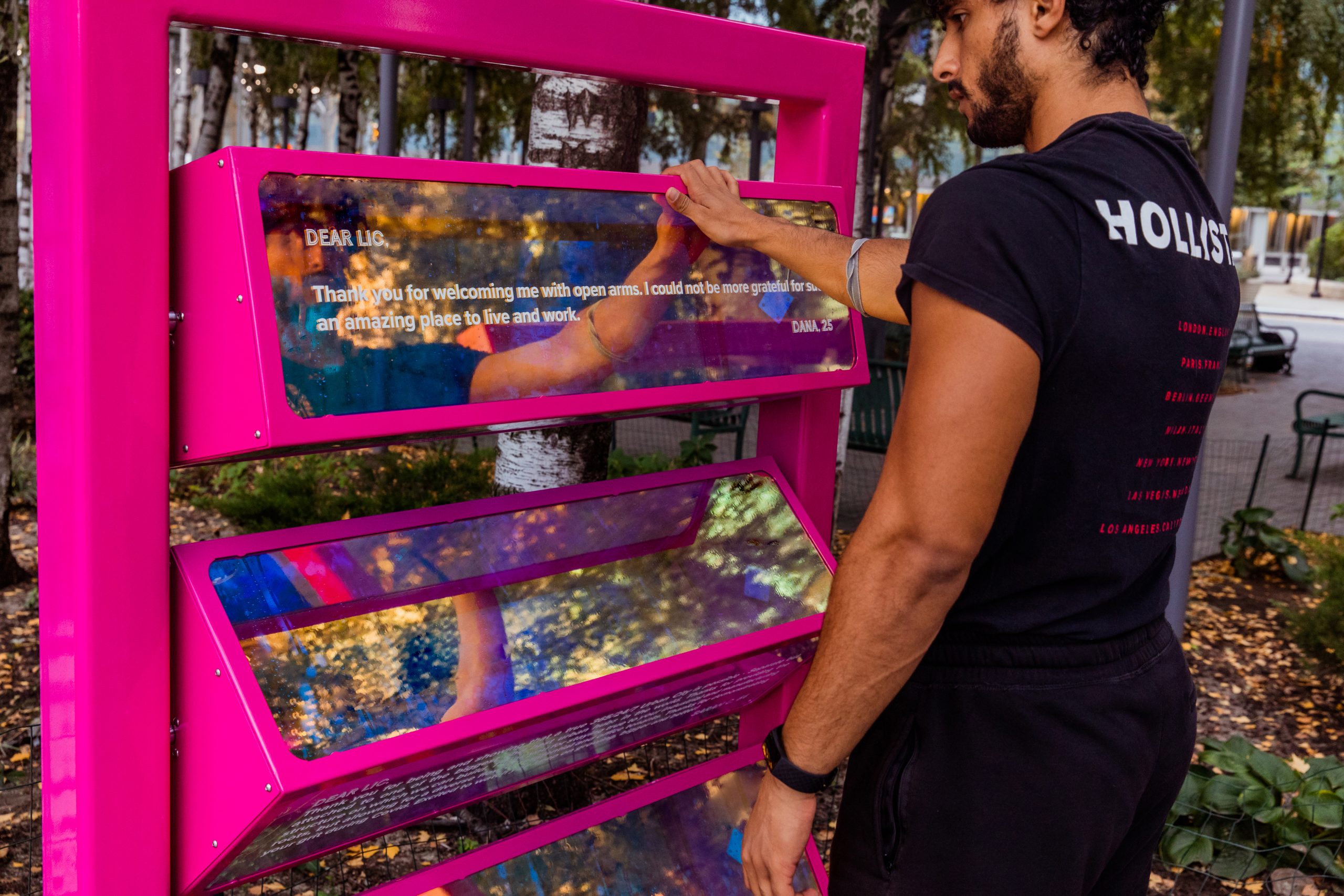 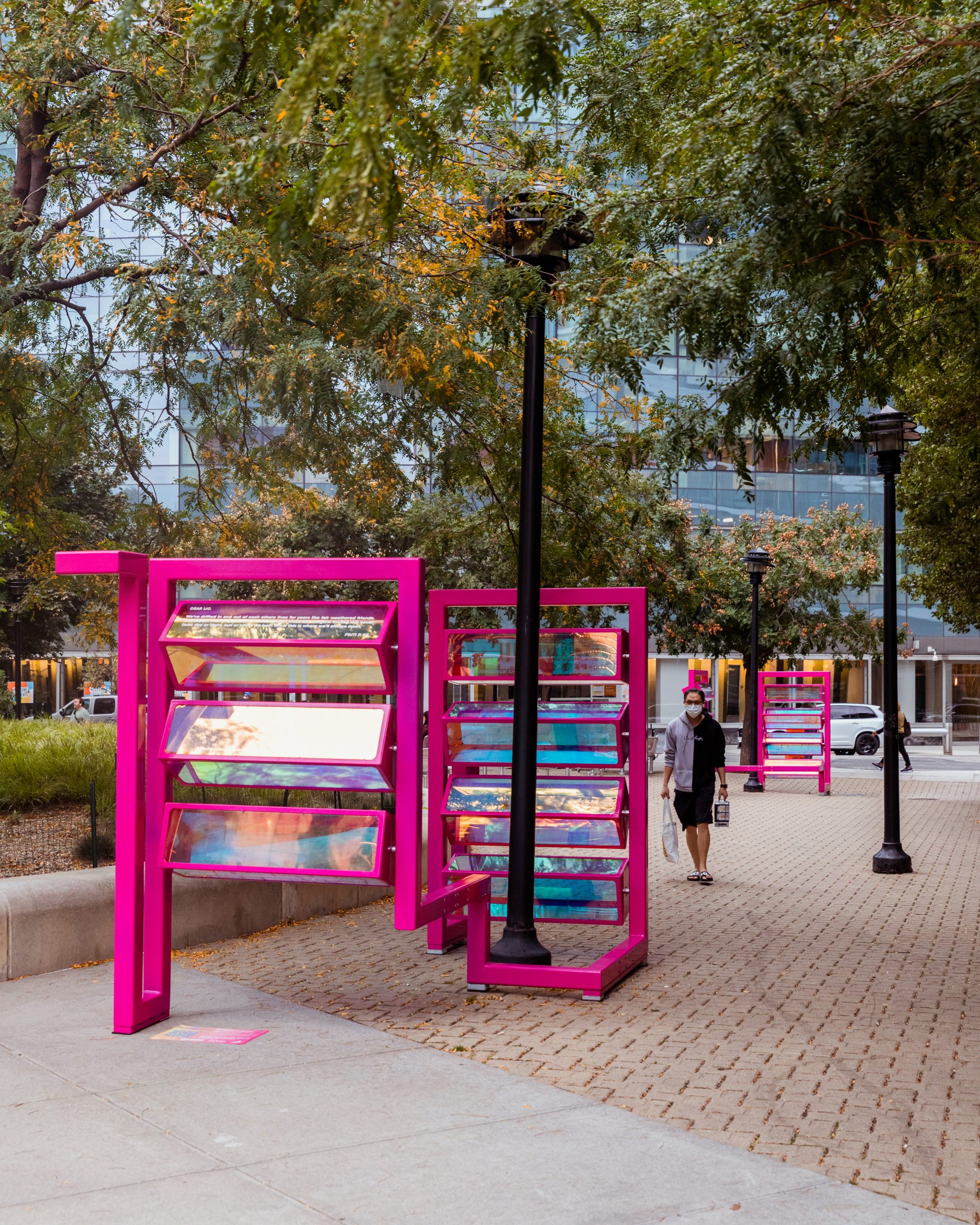 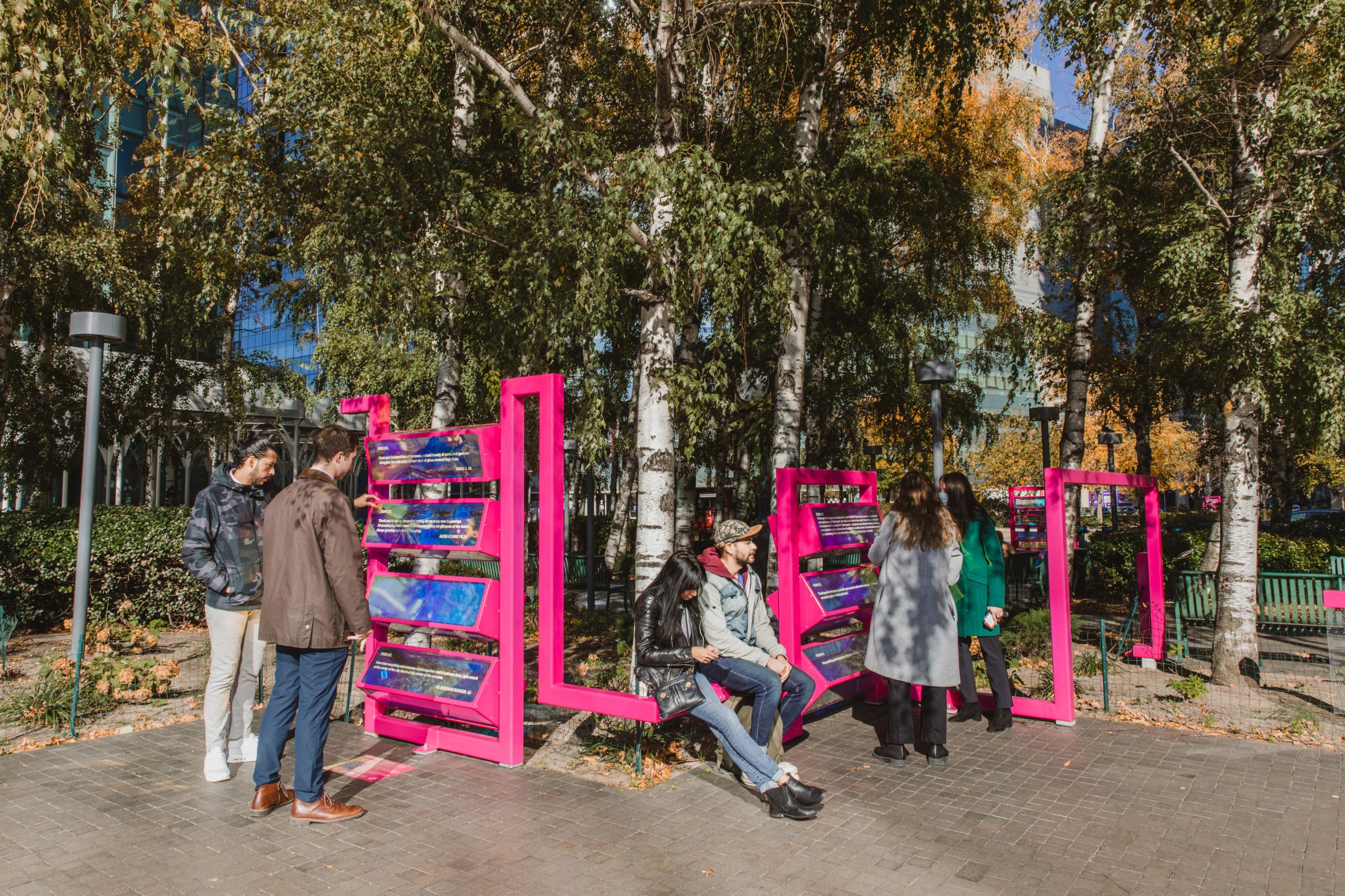 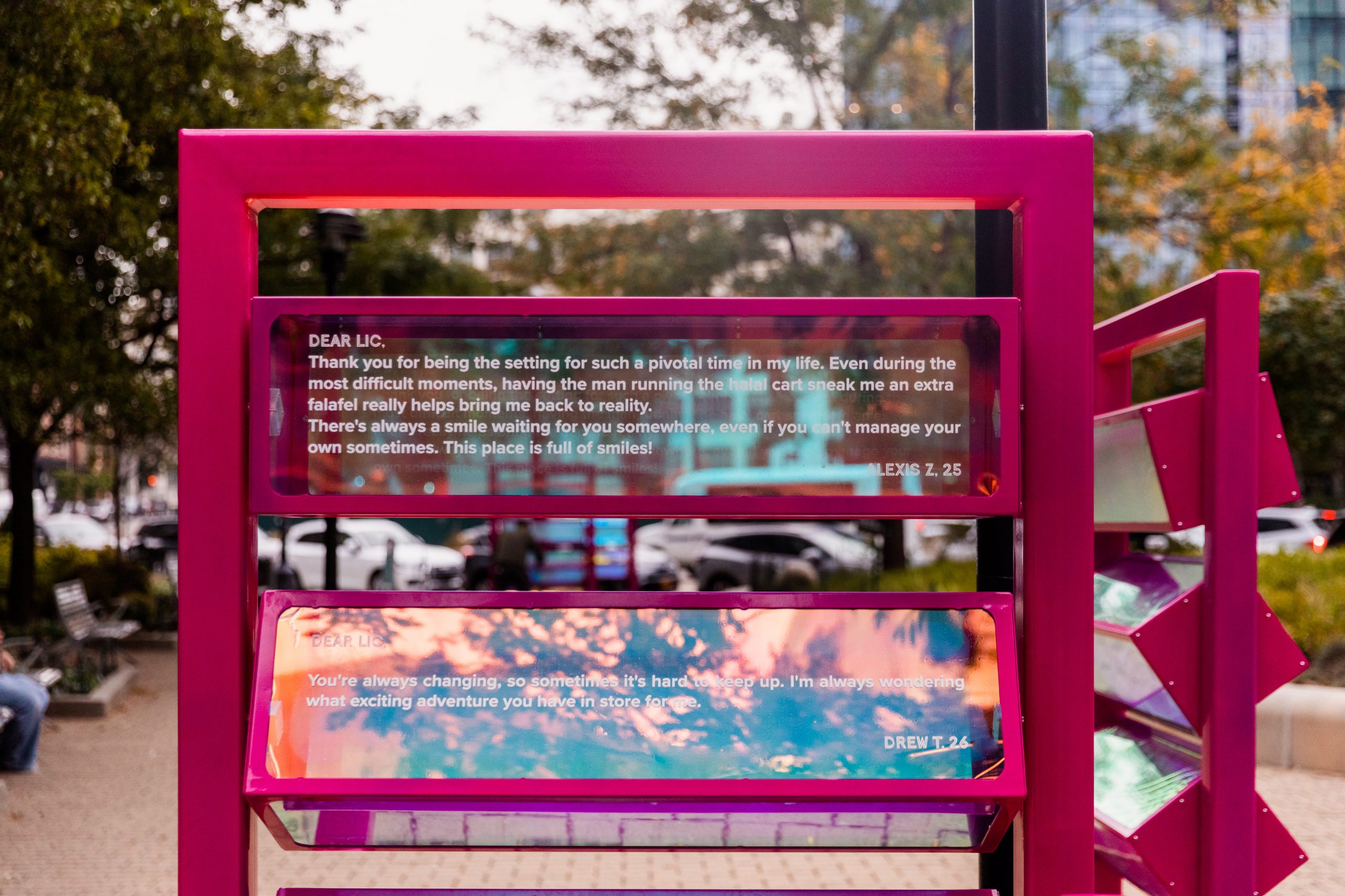 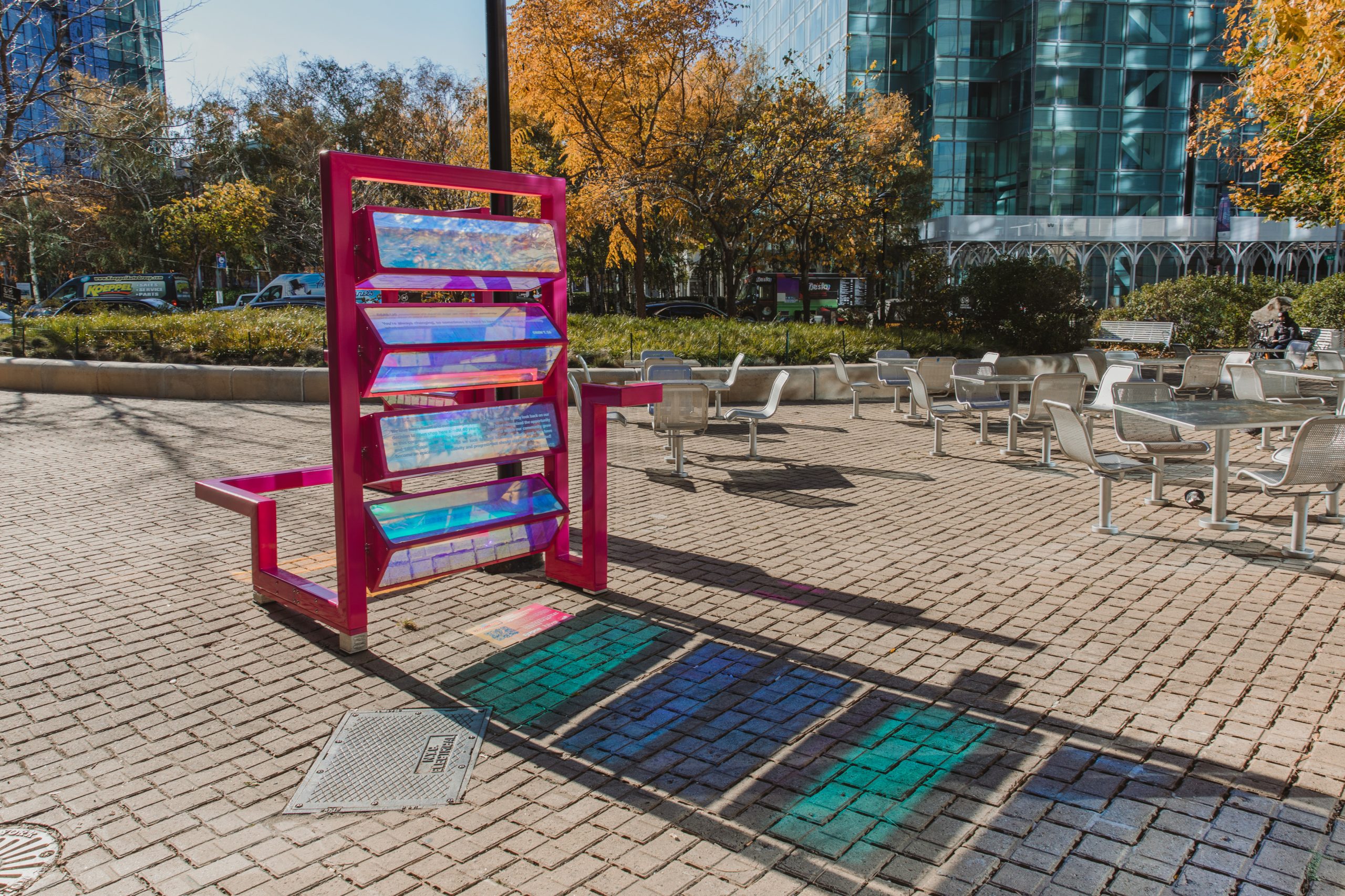 Ribbon was designed as a transformative communal platform for people to connect, share, and learn each other’s versions of Long Island City. The spatial intervention acts as a playful gesture wrapping around and framing out various moments throughout different pedestrian pathways and communal spaces while creating a sense of direction that encourages users to explore new paths of the city. The work becomes a series of timeless landmarks that are always changing and responding to the people, the landscape, and the interactions between them. Through the intervention’s kinetic nature, it allows the user to manipulate the work and the surrounding context while challenging the way in which the space itself is perceived. The units each contain love notes to Long Island City submitted by community members and visitors to become conversation starters between the diverse community. The contributed “love notes” range from poems to motivational quotes written by the community and visitors, and are constantly changing over time, giving space for new thoughts of the city. Ribbon becomes a collaborative, communal platform existing within and around the existing infrastructure that comes to life through the engagement of its users.

As we all begin to be slowly reintroduced back into social environments, we are becoming increasingly more aware of the need for inclusive ways to reconnect with one another within the public realm. Ribbon was developed as a temporary installation that looks at new ways of adapting existing spaces and infrastructure to become platforms for social interaction and communal activity through its open-ended play design. Sparking memorable experiences that keep encouraging people to come back and engage with the work, the surrounding spaces, and each other in new ways.

Ribbon was designed by The Urban Conga in collaboration with Hive Public Space. The spatial intervention was developed as a part of the LIC (Re)Connects series produced by Hive as a way to evoke communal connection within a multitude of areas throughout Long Island City, NY. The project took a large amount of collaboration between the design teams, several local businesses, NYC Parks and Recreation, Boyce Technologies, and the Long Island City Partnership to make happen. The project was developed in modular forms to allow easy disassembly and the ability to be transported into another space within the city over time. As it travels around, it will continue to share the communities’ love notes provided in each area and display the various perceptions of the city and what it has provided for different community members.