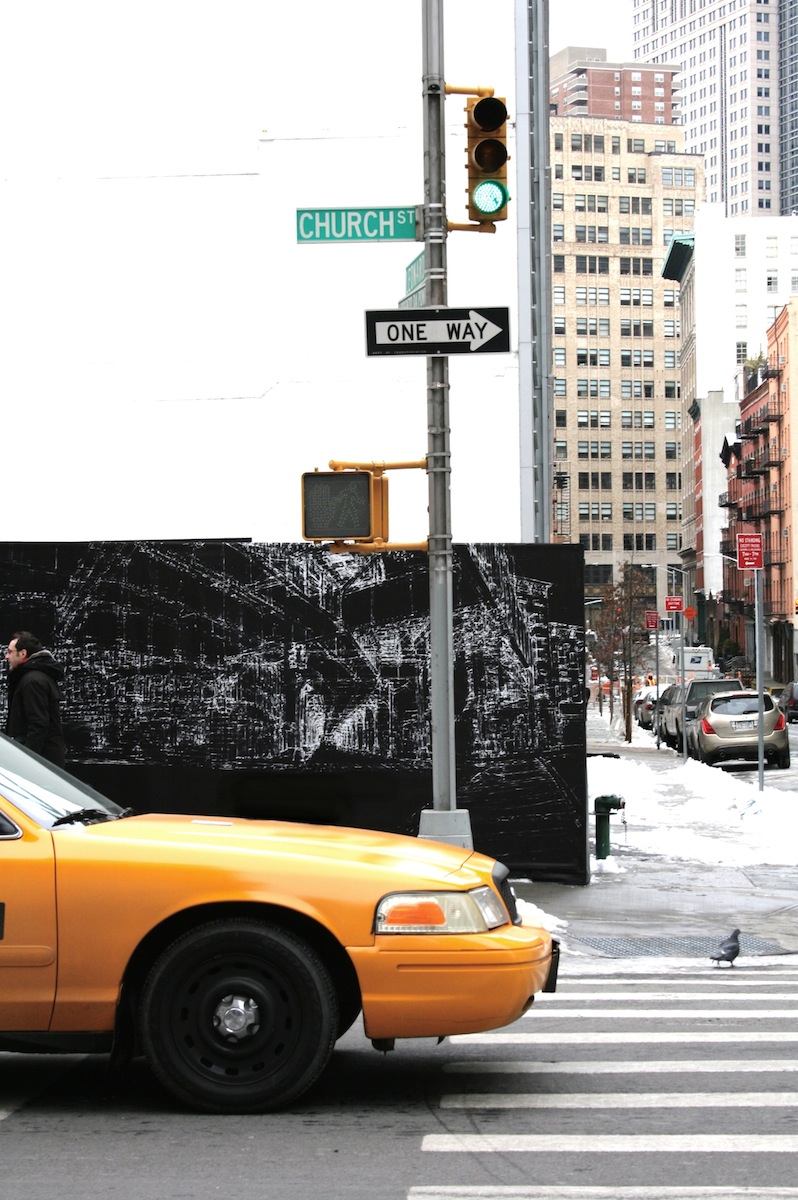 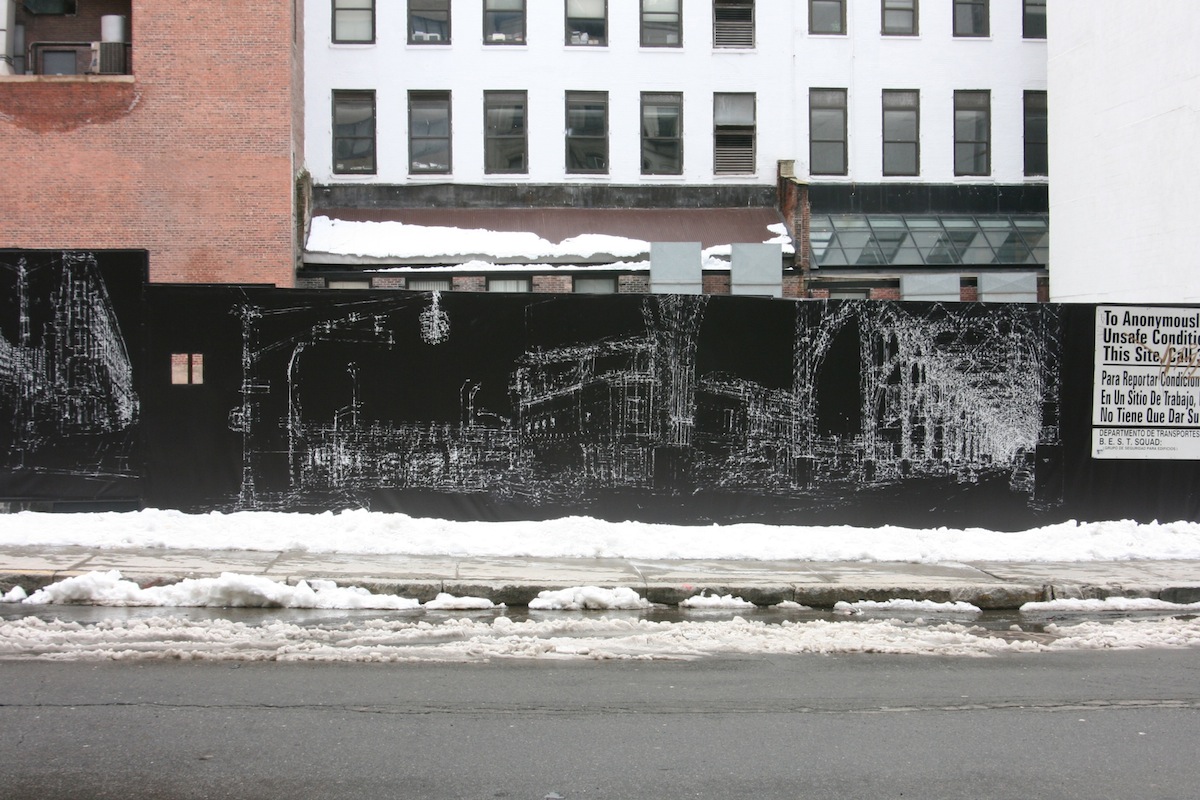 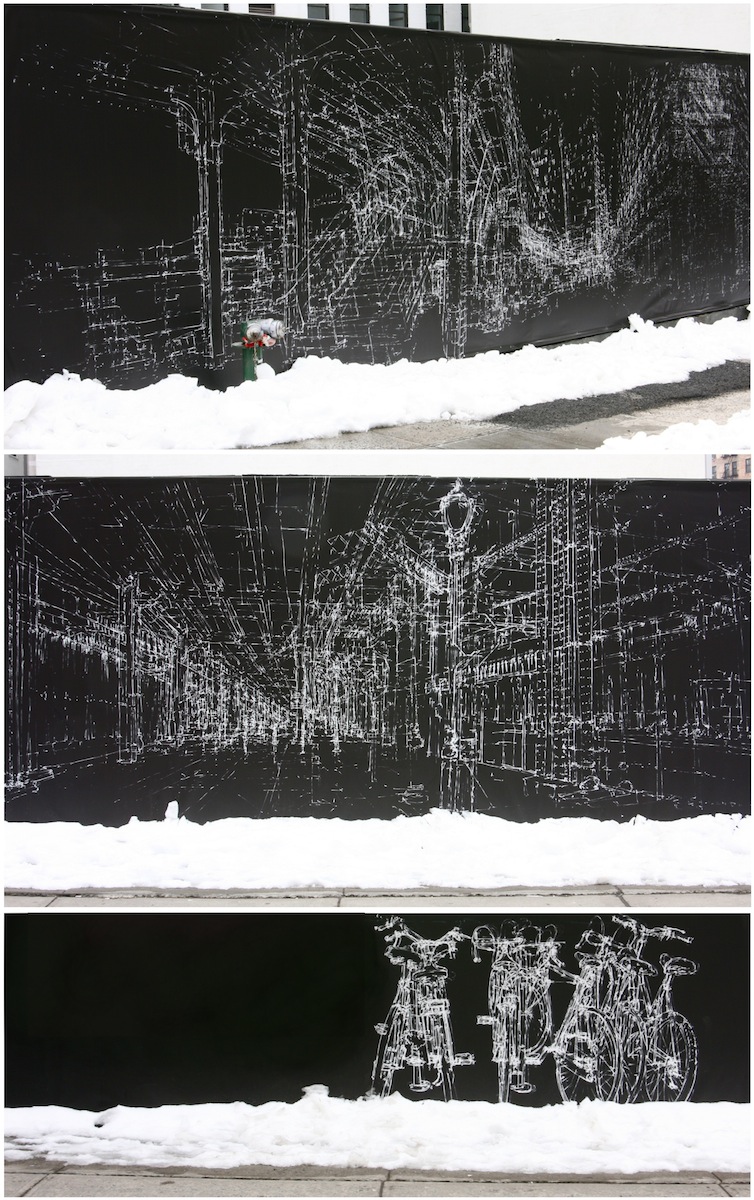 Rendering Leonard was a public artwork created for the high profile site of 56 Leonard Street. This site is home to the new construction by architects, Herzog and De Meuron. The imagery was created to reflect the energy and architecture of New York, specifically Downtown Manhattan where the piece was located. This work portrayed ghostly traces of the surrounding urban environment around Leonard Street. Through layers of hand-rendered drawings exposed onto photographic paper, the manages captured the energy of the City and it’s constant state of flux.

The artwork was commissioned to conceal a highly visible construction site. It was to be installed along the 230 ft of plywood wall that surround 56 Leonard Street, and was up for one year.

The commission was to create a piece that had synergy with both the Downtown New York City environment as well as the architecture of the building that was to be built by architects Herzog and De Meuron.

The artwork was successful and had a tone of elegance. By keeping the sharp black and white lines and strong architectural elements it complimented the environment and added to the neighborhood of Manhattan that it was located in. The large scale of the work physically immerses the viewer into a portrait of New York and the urban architectural environment across the Downtown area. Through continuous study of the metropolis, the piece offered a complete 3 dimensional vision of the city’s kinetic energy.

The collaboration was seamless. It was the first project with which that Helen Dennis had collaborated with Artea Projects. As the artist I was given the support from the curators (Artea Projects) to be able to focus on the creation of the work. Although the artists still fully managed how the budget was spent, there was always the support of the curators in developing the project to it's full potential. The Alliance for Downtown New York dealt directly with the curator and co-ordinated all of the logistics involving legal or public safety issues.
The project was a great success and the relationships have continued with future projects.