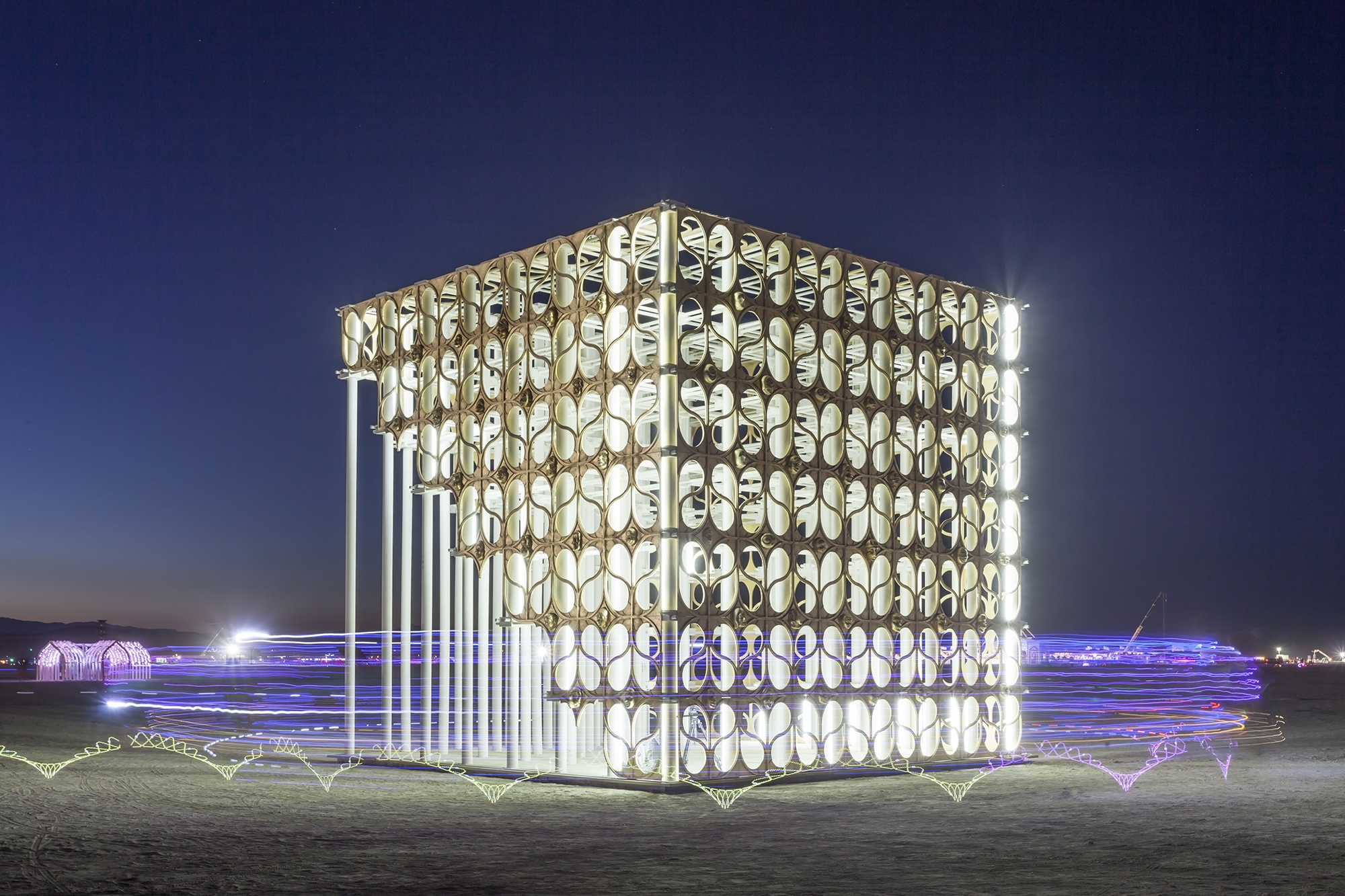 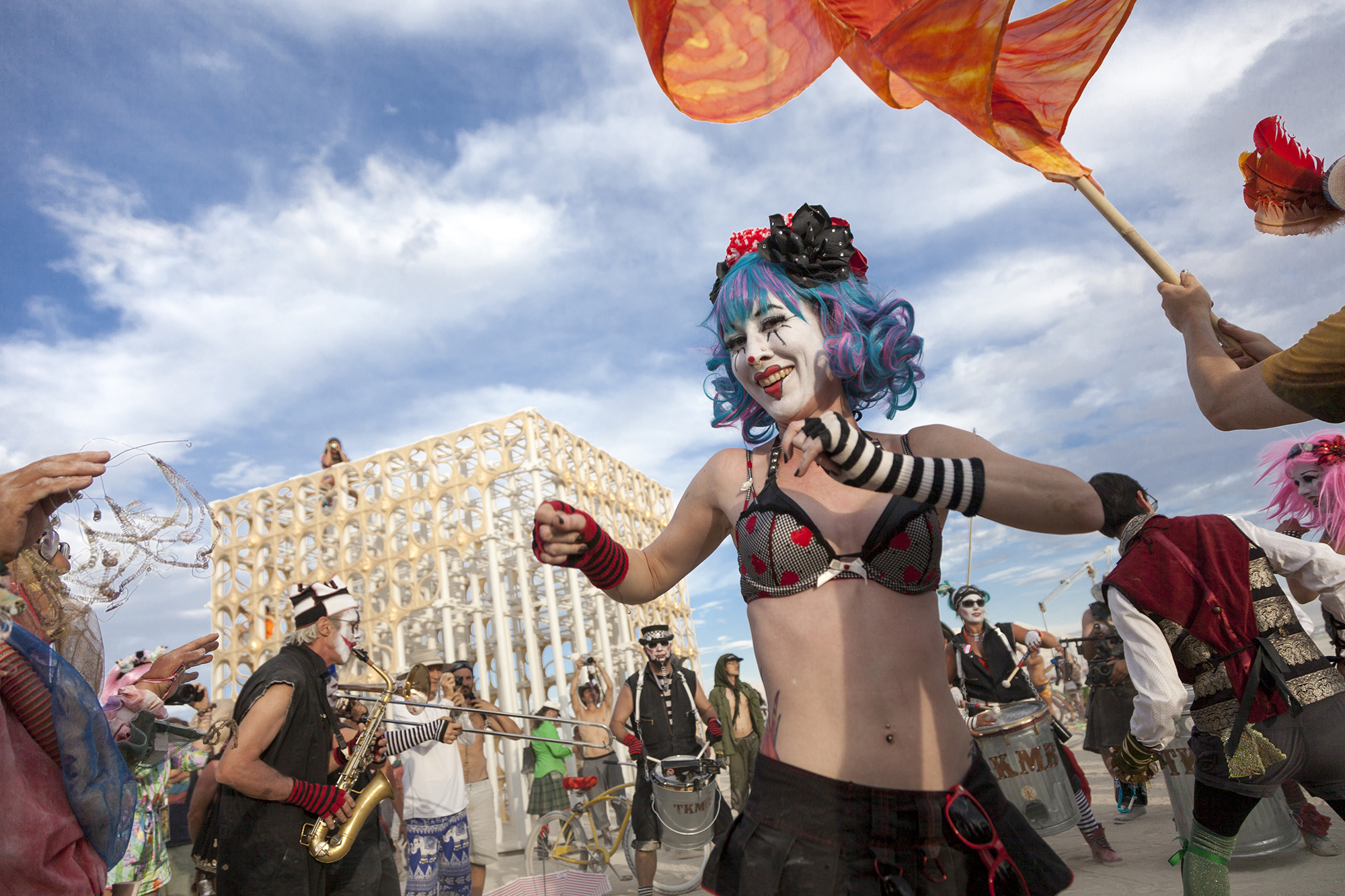 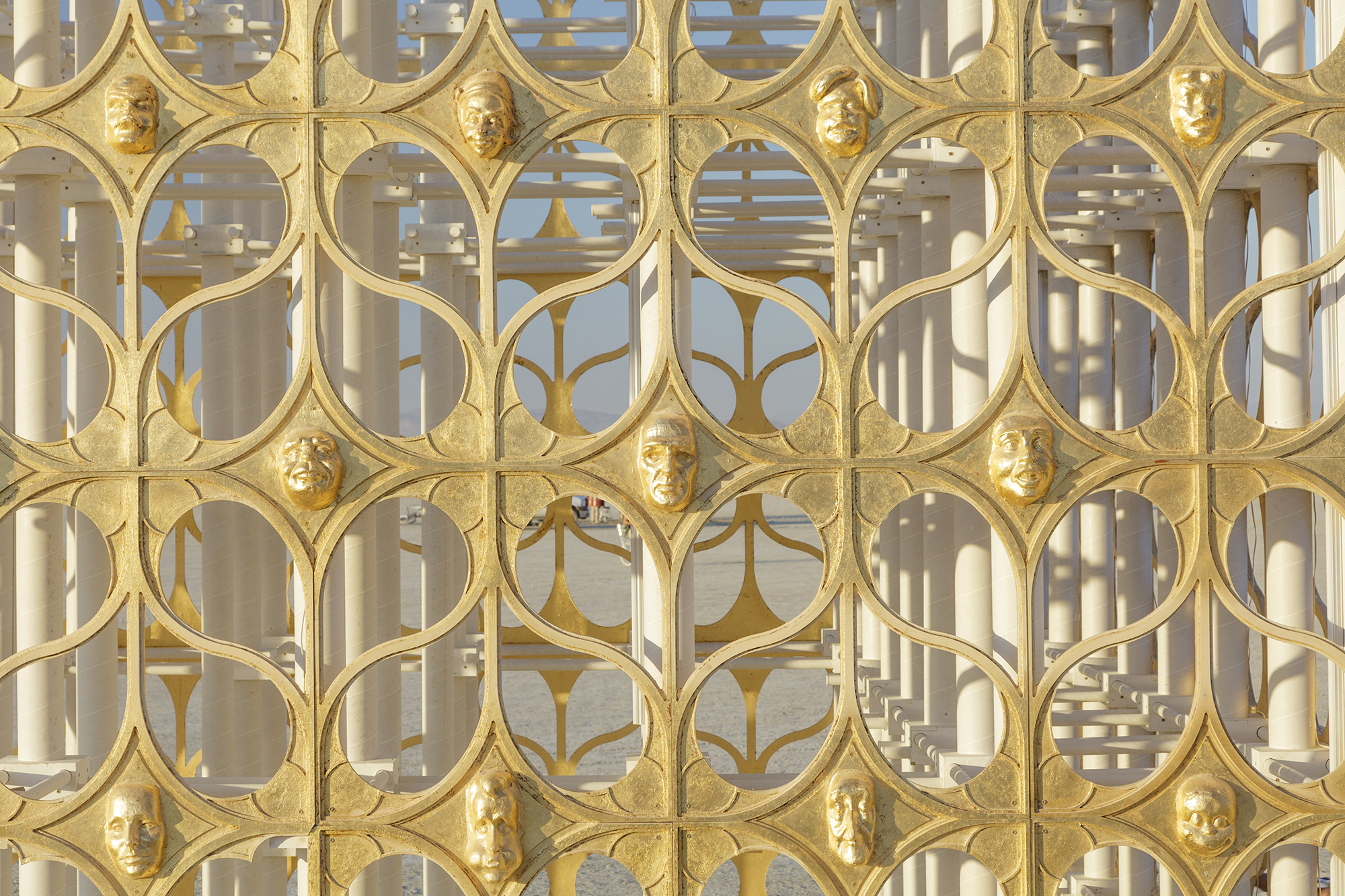 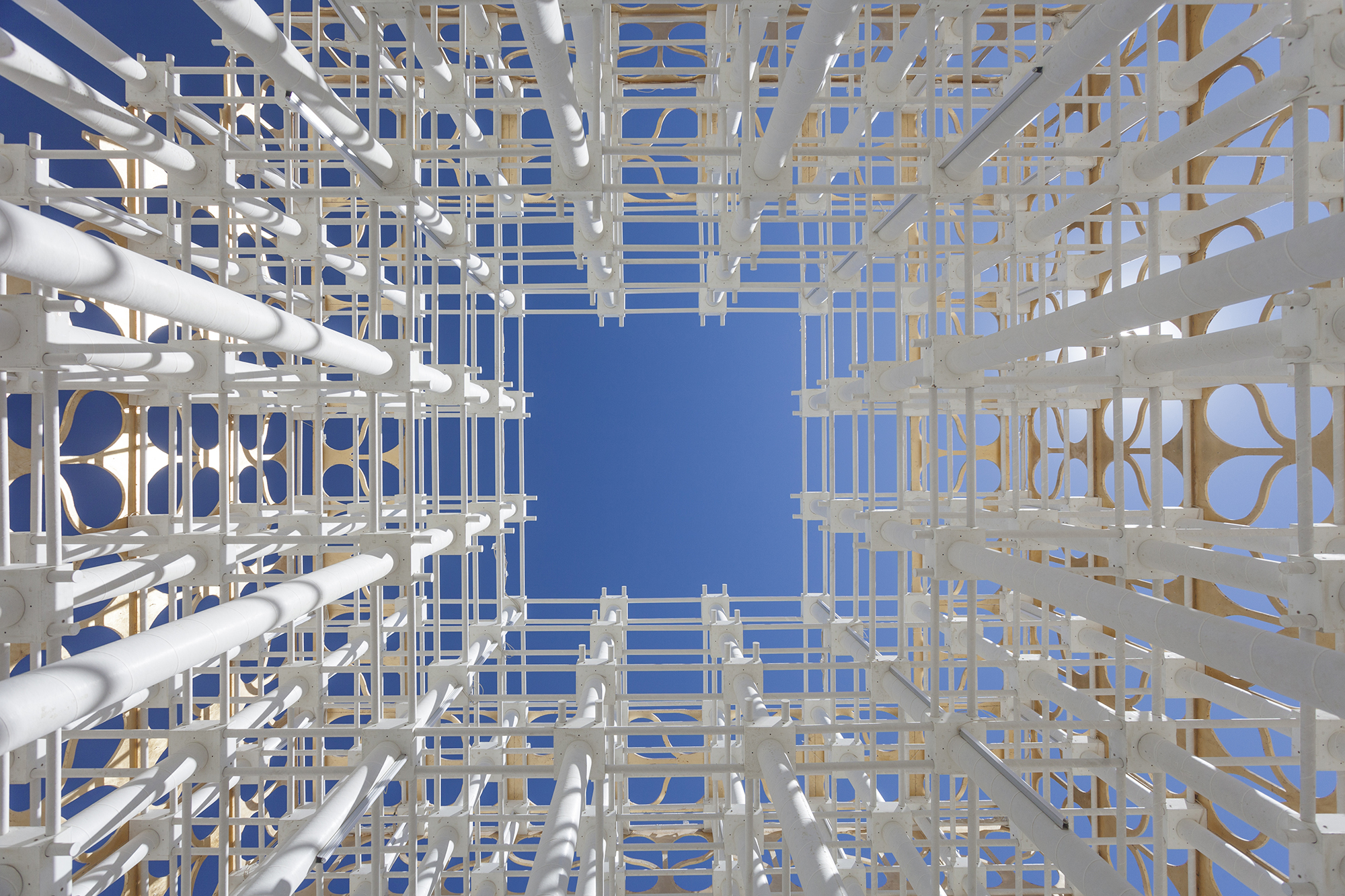 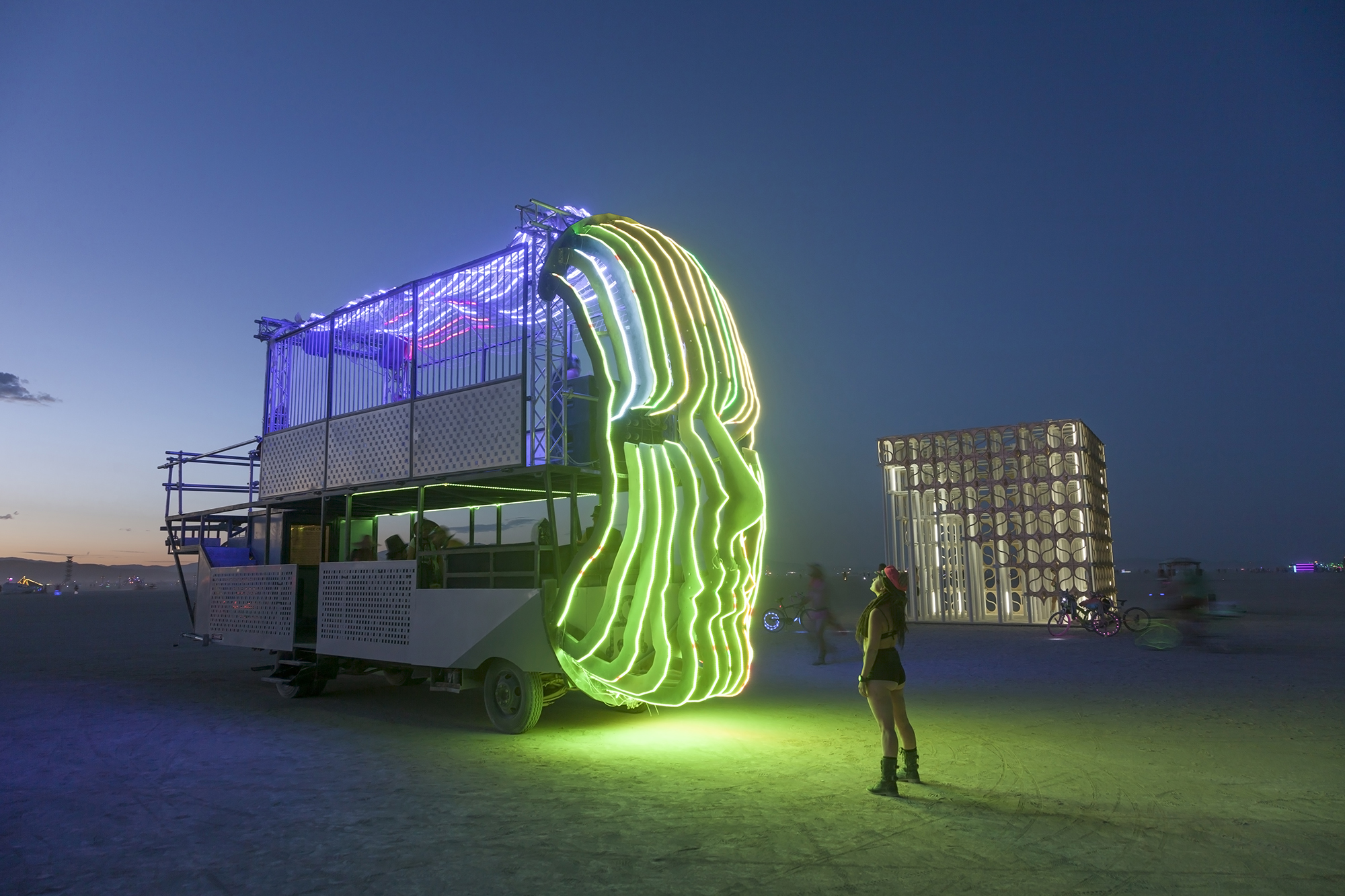 Client: funded in part by a burning man grant

(Combination of geometry and sculpture with technics used in Fallas festival from Valencia, Spain. A reinterpretation of grotesque decorations from Valencia Silk Market, UNESCO Heritage building from XV century.
A golden cube in the desert to attract people to its inside, where they become part of an art installation that mixes the contemporary language of the latticed architecture of the pavilion with the cardboard pieces and molds of a traditional Fallas guild.

The cube lays over a wooden mosaic of 25.321 pieces assembled by social collectives. The debate between tradition and contemporary is held over the floor that has been built by the collectivity. Nor the tradition nor the experimentation have a future without communal effort.
Valencia, home of Fallas fire festival and Da Vinci have a point in common. The Borgia family. While Da Vinci worked in Rome for Pope Alexander VI. The Borgia family built a palace that is now house of our government. While in Valencia the Holy Inquisition had the power, the civil society was building a building for trade. The Silk Market is one of the most important medieval secular buildings in Europe. It is adorned with many grotesque scenes and obscene figures that was how people was facing against powerful church. That spirit that Valencia people has to face against power is part of our culture and the main reason of Fallas. To make fun of power.

And is all this tradition but also its evolution during years that we want to bring to Burning Man.
The project will mix:
– An structure made only of cardboard to generate the bigger space with the minimum resources and that can be burned in a clean way. Structure covered with medieval decoration.
– Mosaic design in floor with the idea to make participate at its construction to the community. This mosaic will be inspired in Nolla’s ceramic, a traditional Valencian ceramic which production was lost at the end of 19th century.
– Figures made in cardboard in the traditional way of building Fallas. The figures will be inspired in the grotesque and erotic figures of the Silk Market in Valencia.