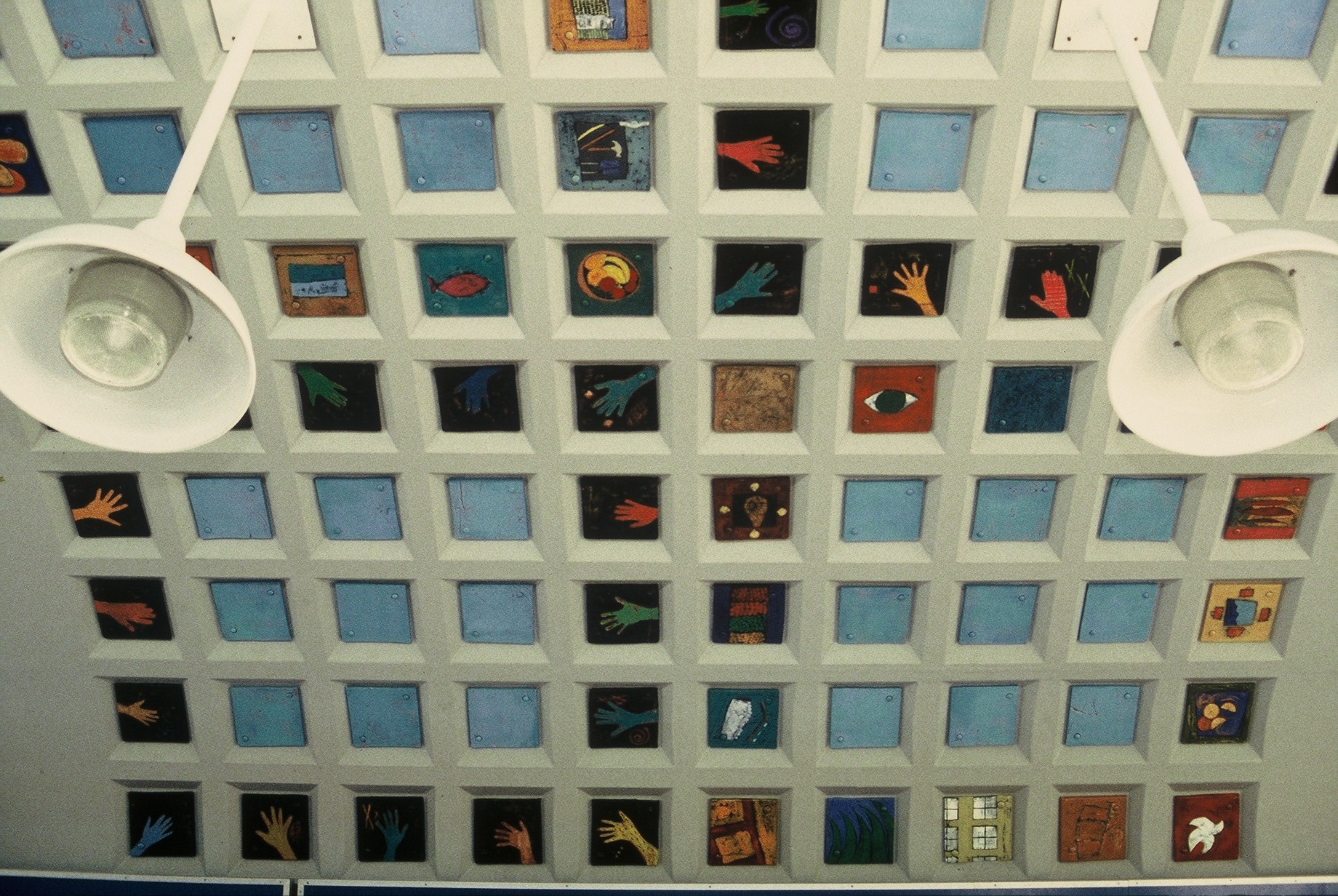 “Reaching for Miami Skies” is a permanent painted clay installation on the 32' x 92' curved canope ceiling over the Brickel Metromover Station in Miami, Florida.It makes reference to a quilt. Individual handmade tiles documented actual handprints from people from the surrounding community, as well as their ideas when asked to describe Miami. It was awarded by Metro-Dade Art in Public Places and was intended as a solidarity statement among Miami's ethnically diverse population.

When asked to address the site to integrate artwork I was immediately drawn to the curved concrete canopy ceiling. The 12" square coffered spaces would be the perfect space for individual handmade tiles. The ceiling reminded me of a quilt and i set out to create a design that reflected a patchwork quilt. I wanted to find a way to phisyically involve members of he surrounding community to create awarenes of the public artwork and instill in them a sense of ownership. So I handbuilt tiles that were later transported to the various workshop sites where interviews were held with participants in the community. They were asked to describe Miami in one word. These words were later transformed into individual images. There were words such as sun, bird, water as well as abstract words such as vision and energy. Each participant's hand was traced onto a clay tile. The tiles were then transported to my studio where they were fired in my kiln and later painted. The hands were painted with different colors to make reference to Miami's ethnically diverse community

Vivian Rodriguez Donnell,the director of Metro-Dade-Art in Public Places at the time, facilitated and coordinated the workshops that were held. My husband and I transported the wet clay tiles on solid doors in a van to and from my studio to the workshops., After the tiles were painted and numbered on the back, small button covers were created and painted to match the tiles to cover the small holes where the pieces would be bolted on to the concrete ceiling The tiles were then transported to an automobile body shop where they were sprayed with a protective weatherproof coating similar to what is used on the exterior of airplanes The tiles were then boxed in numbered boxes. The tiles were transported to the site and installers epoxied and bolted them to the ceiling according to the drawings.

I felt that the project was successful. Although each of the hands on the ceiling was painted a different color there was an underlying sameness to all of them because of their shape. This alluded to the fact that although we all come from diverse backrounds we are all very much the same.