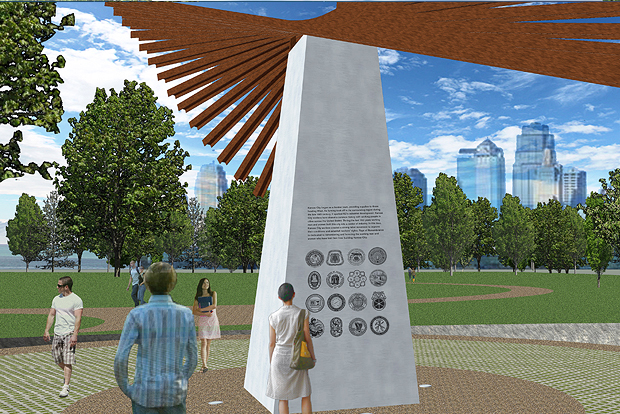 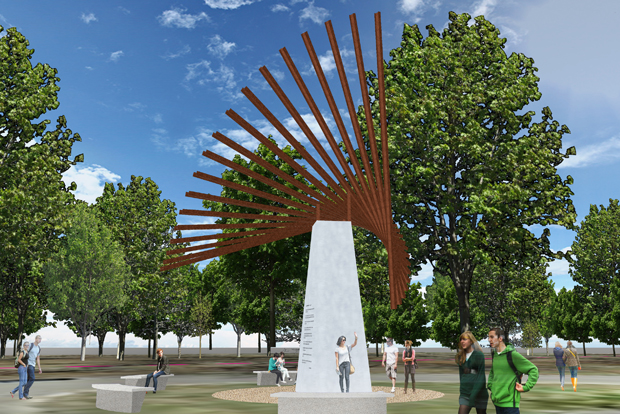 Steel I-beams have always been palpable icons of modern city infrastructure, and in this sculptural context, they are simultaneously both medium and symbolic element. Rays of Remembrance features 18 steel I-beams symbolizing 18 construction trades represented in this memorial to Kansas City Workers. The steel rays are elevated by a monumental plinth created from stainless steel. The sculpture is set into a circular plaza that is carved into a gently sloping landscape, surrounded by a semicircular array of trees.

The Workers Memorial will represent the working men and women who have lost their lives building Kansas City. The memorial should try to have a broad appeal representing a number of trades in the construction industry. Those trades include: Boilermakers, Carpenters, Bricklayers, Cement Masons, Elevator Constructors, Heat & Frost Insulators, Electricians, Ironworkers, Laborers, Operating Engineers, Painters, Pipefitters, Plasterers, Plumbers, Roofers, Sheet Metal Workers, Sprinkler Fitters, and Teamsters. The site should create a welcoming yet somber impression to visitors.

Key elements should include providing a monumental feeling of awe, with the presence of history of Kansas City, that tells the story of workers building it.

On the plinth’s north face is laser etched text, providing a brief interpretive history of the working men and women who built Kansas City into one of the nation’s great American cities. This text is strategically placed on the north side of the plinth, so that viewers look out upon Kansas City’s dramatic skyline as they encounter this powerful story. Below the interpretive text, visitors encounter the emblems representing each of the trade unions.