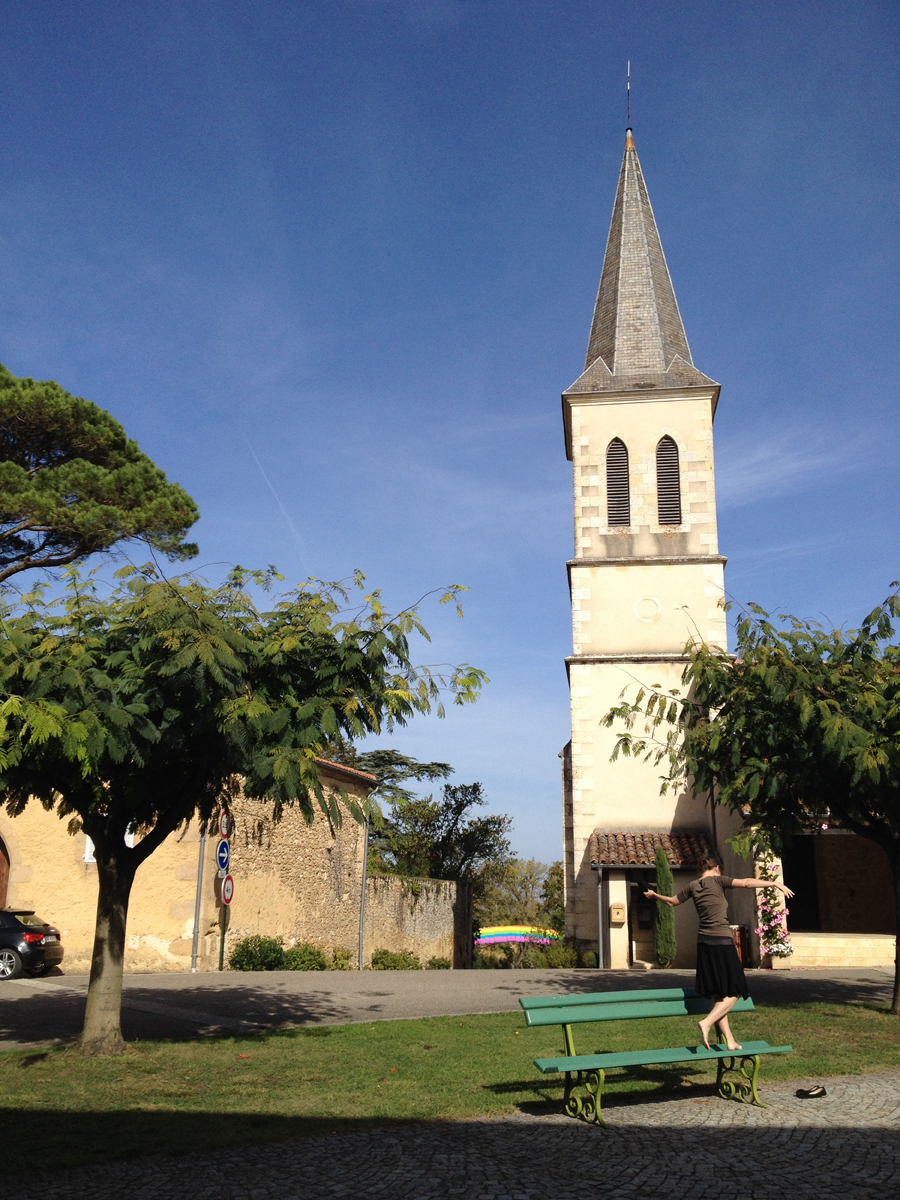 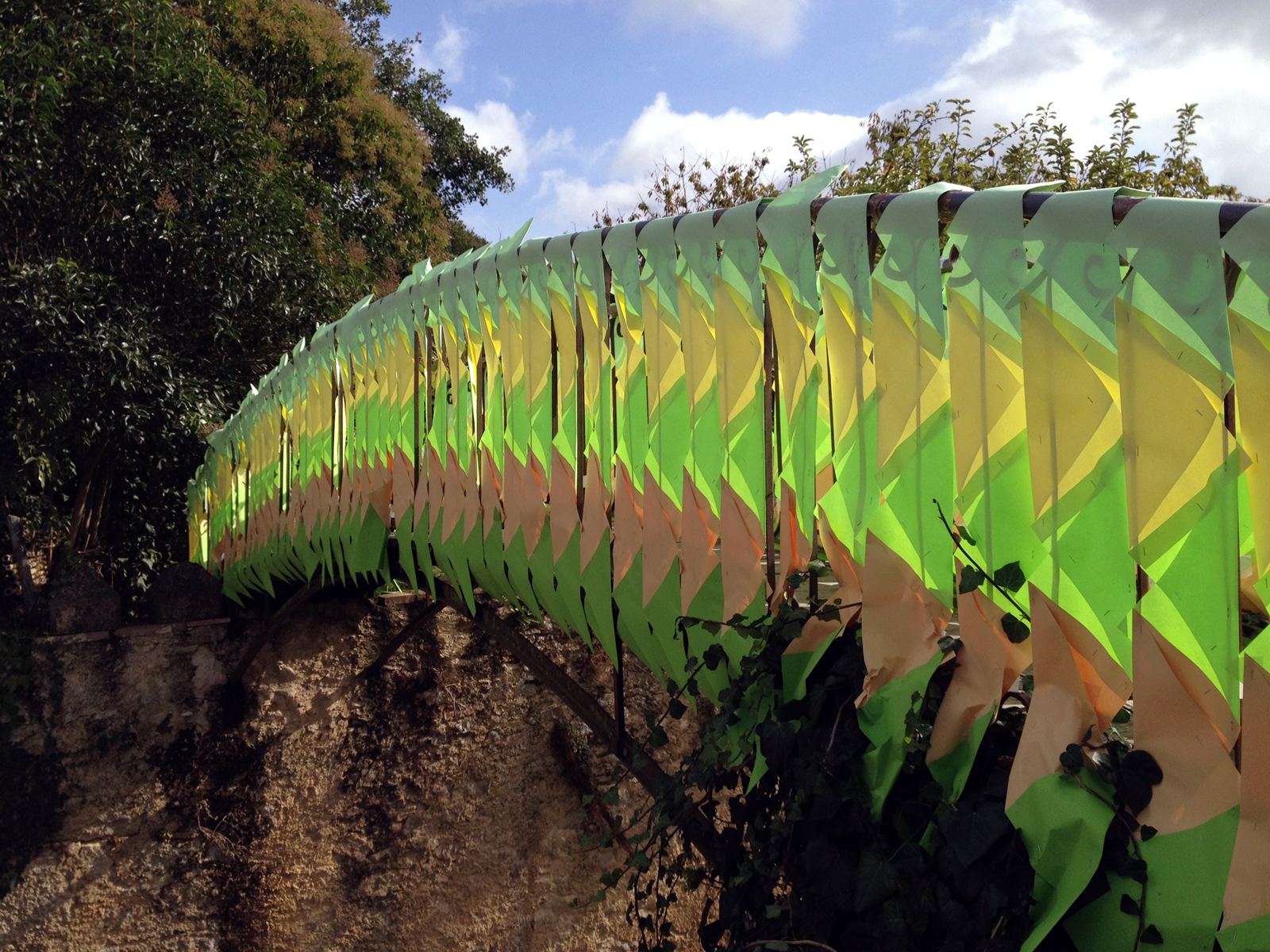 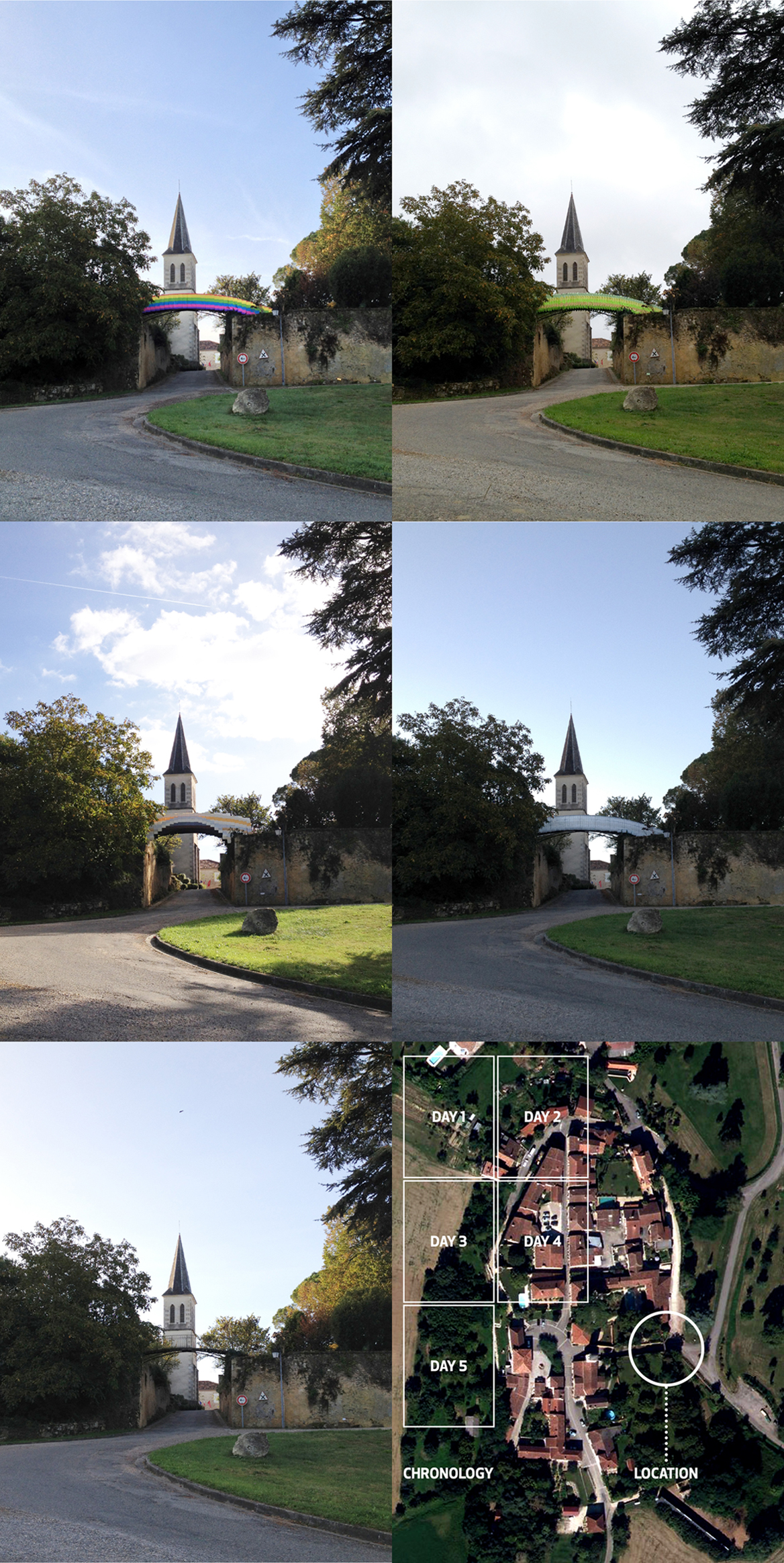 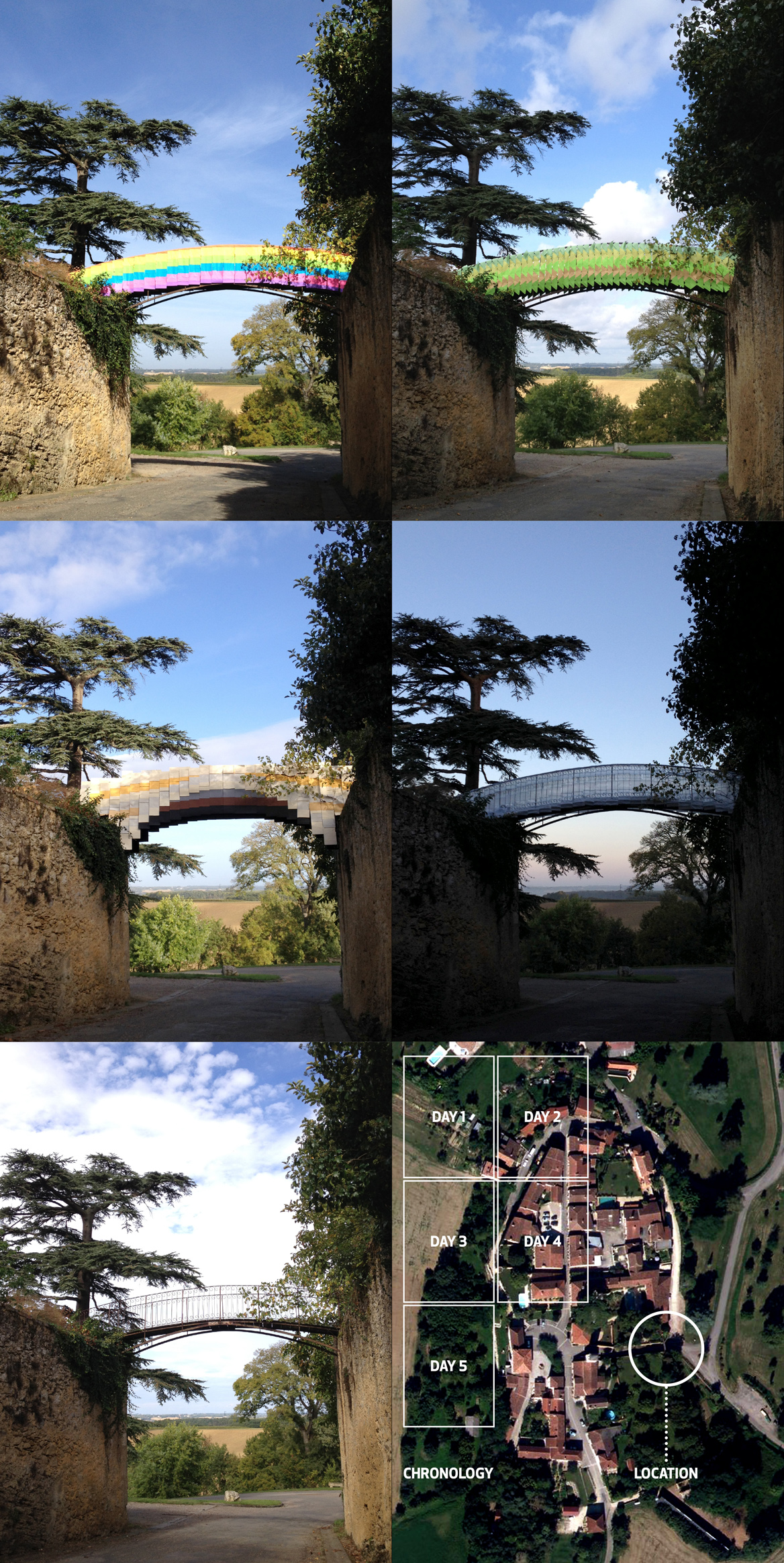 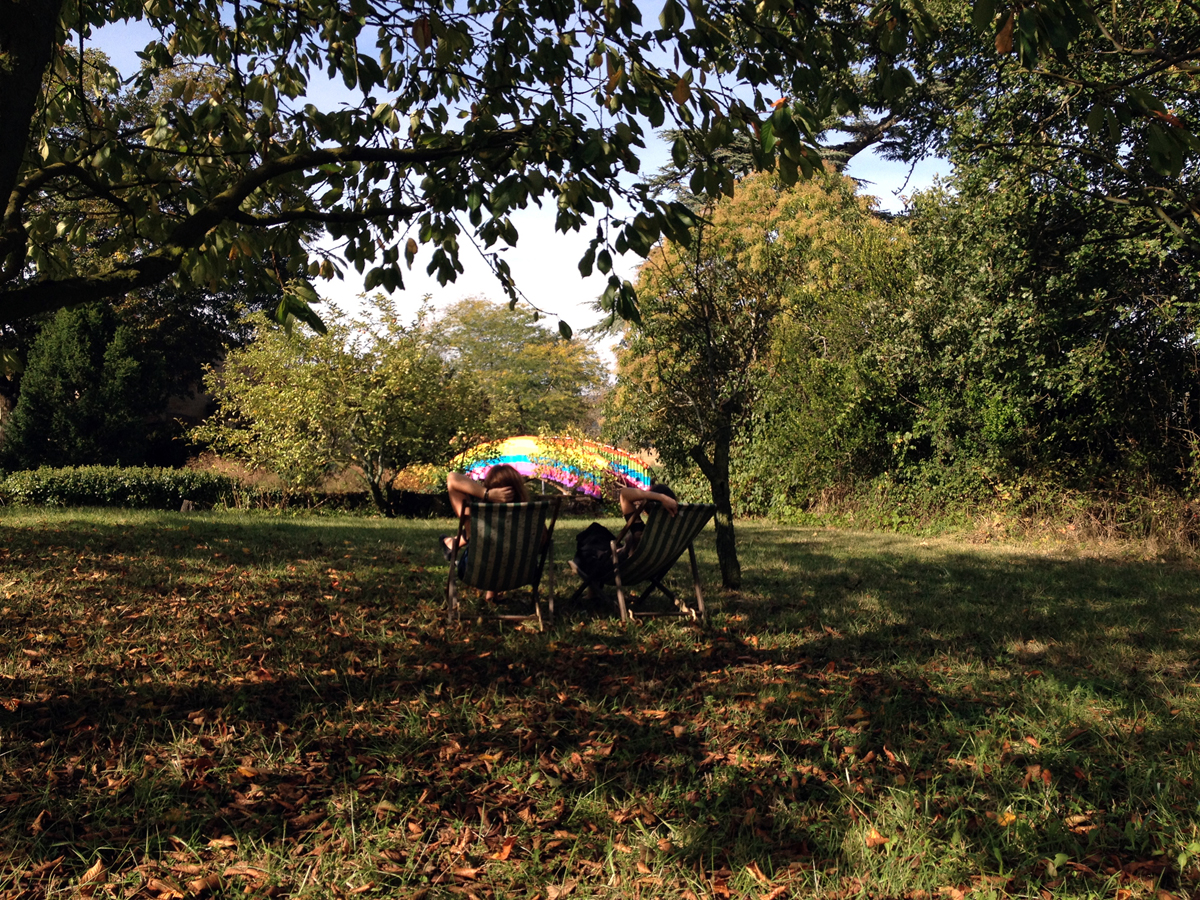 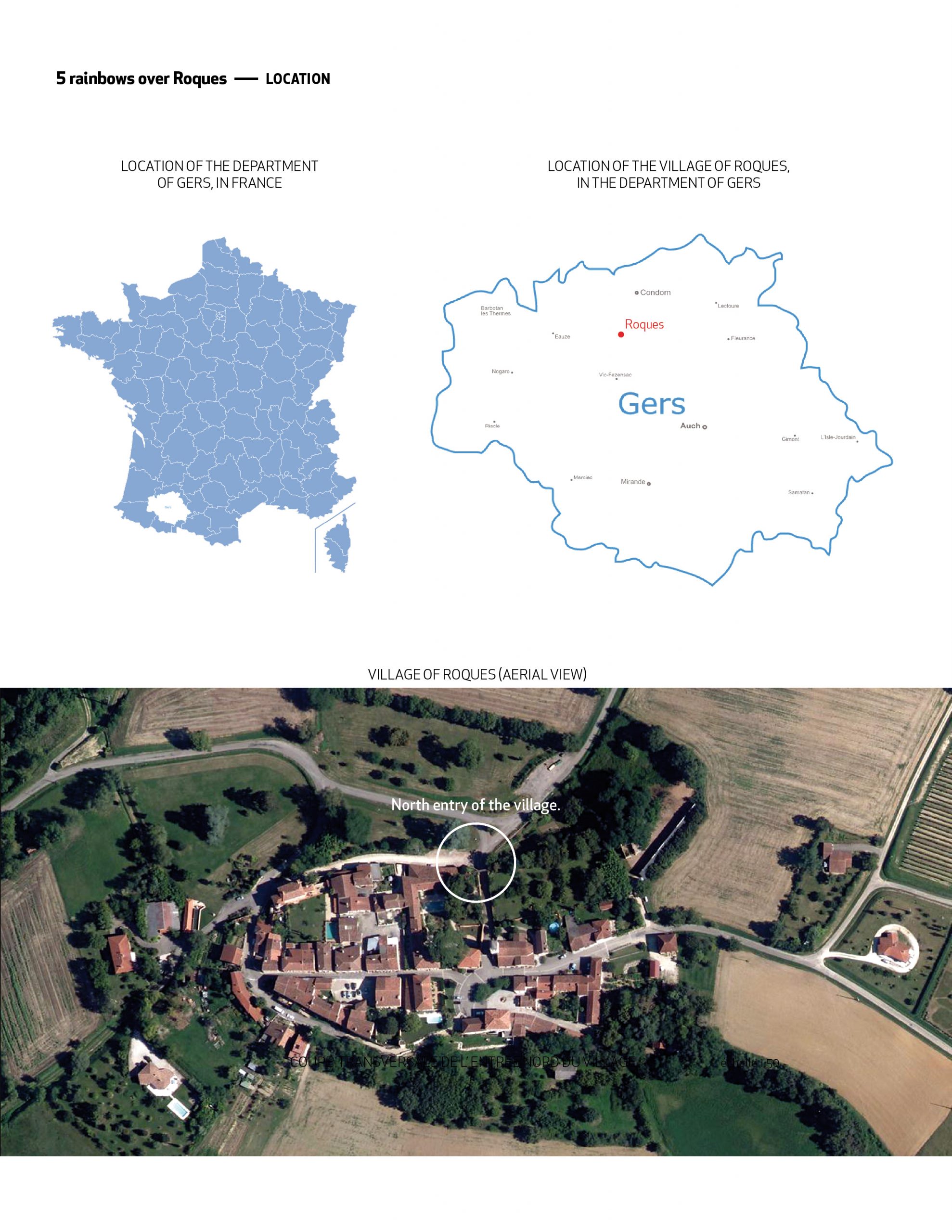 5 rainbows over Roques is a temporary installation inspired by both context and perception. It was presented over the course of one week in the tiny French village of Roques in October 2014. It was the final phase of a six week architectural research residency granted by the ‘Maison de l’architecture du Québec’.

Our initial intentions for the residency were based on two themes:

1. Context: General and particular (a specific site to be chosen in the public space of the village). We wanted to highlight the notions of identity, territory, cultural specificity, history, social context, and the influence of these realities in architecture and in art.

2. Site specific artistic and/or architectural installations: The process of the artist and the architect have many similarities, especially in the way they interact, influence, and are influenced by the context. Both conceive objects, perceptions, environments, and experiences based on a reference system that takes into account every aspects of reality. There is obviously a huge potential for both disciplines to feed off each other, resulting in contextual relevance and significance.

2. Meetings with artists and architects that have a particular relationship with the local context. Here are some of the people we met that inspired us:

Peter Wenger: Renowned batik artist born in Berlin in 1937. Has been living in the village for 40 years.
Maartin Stuer: Ceramic artist born in Japan in 1965. Lives and has worked in Gers since 1995. Does in situ installation inspired by the context.
Xpedit: Experimentation laboratory of 6 architects specializing in architectural/artistic installations.
Marie Presani: Architect in Auch and the prefecture of the department. Works with context to design contemporary insertions in old towns.

3. Conception. We chose a site, the north entrance of the village, for its physical and symbolical potential. We wanted to create an installation that would reveal this place, in relation with its signification and configuration. We tried to communicate with the residents and the people that work in the village in a simple way but also with different levels of possible interpretation. Modifying an entrance allows us to think we can change the first or last impression of the whole village.

The theme of the rainbows have an obvious and strong evocation power. They symbolize hope, happiness, and also an imaginary and enchanted world. In reality they are a very concrete optical phenomenon caused by weather. They convey an idea of an ideal countryside, and also the offset between reality and perception. Each day was a declination of the theme playing with different materiality and references to the context. We had a warm reception from the residents including the mayor. Everyday interaction with the passersby and people coming back was very stimulating.