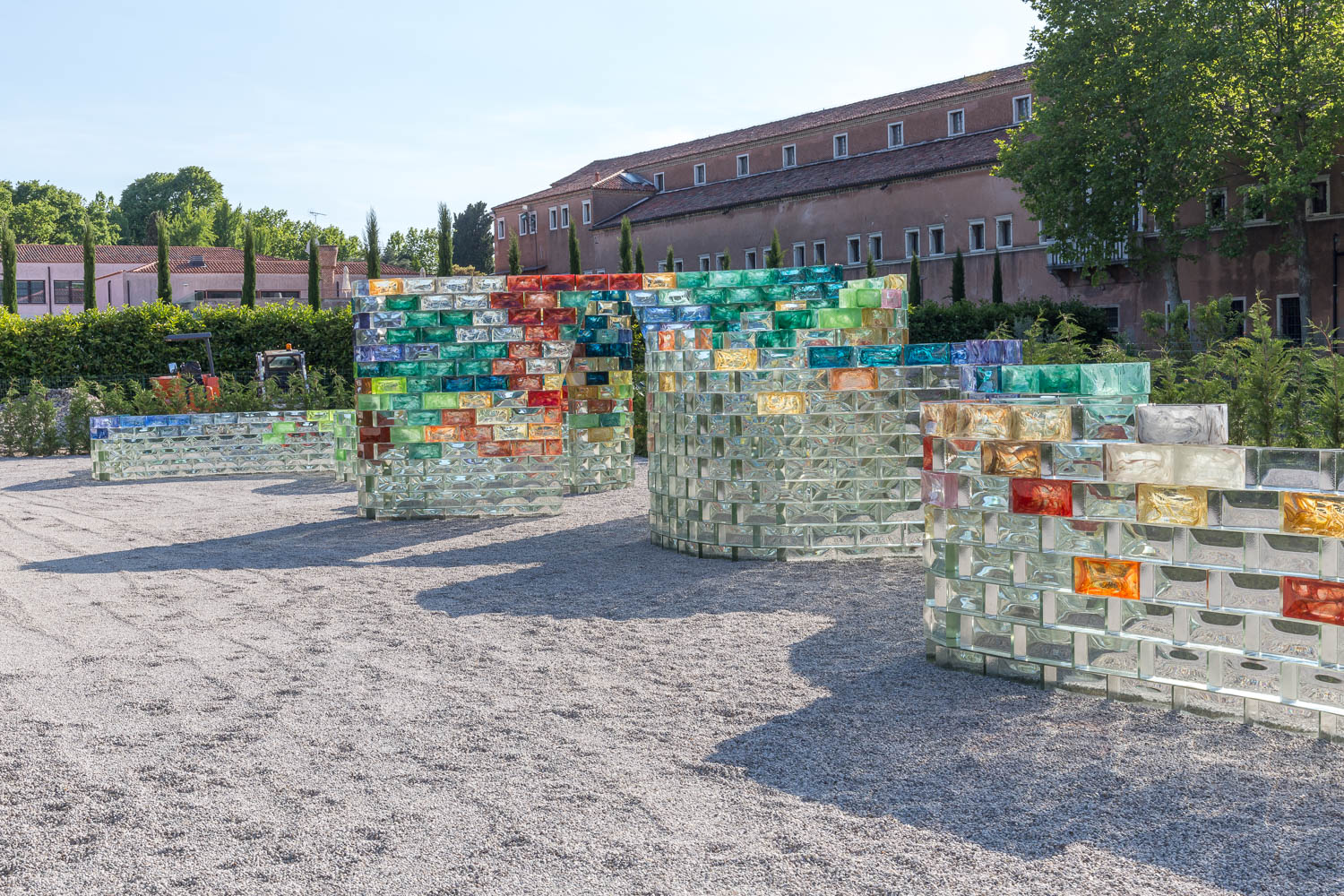 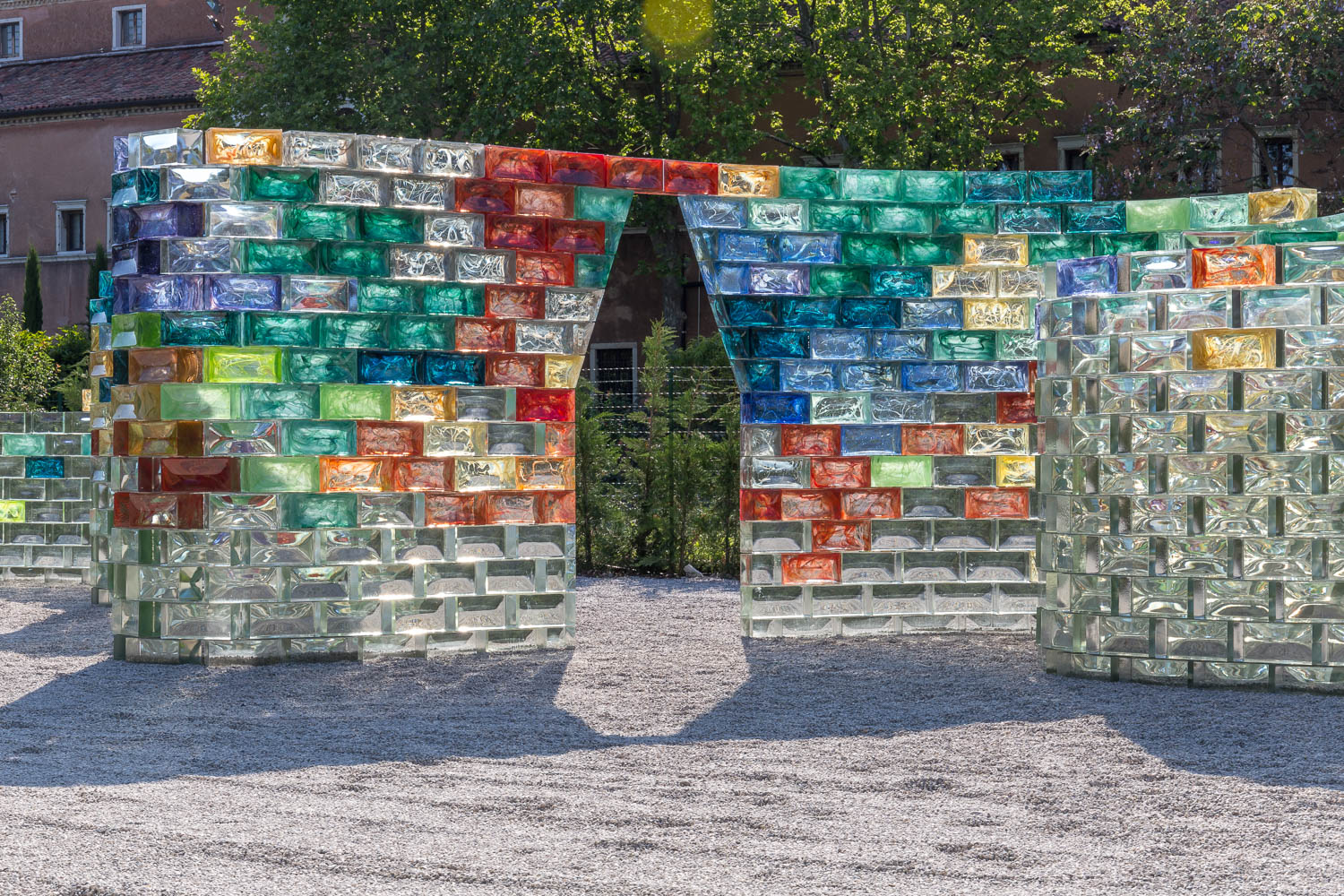 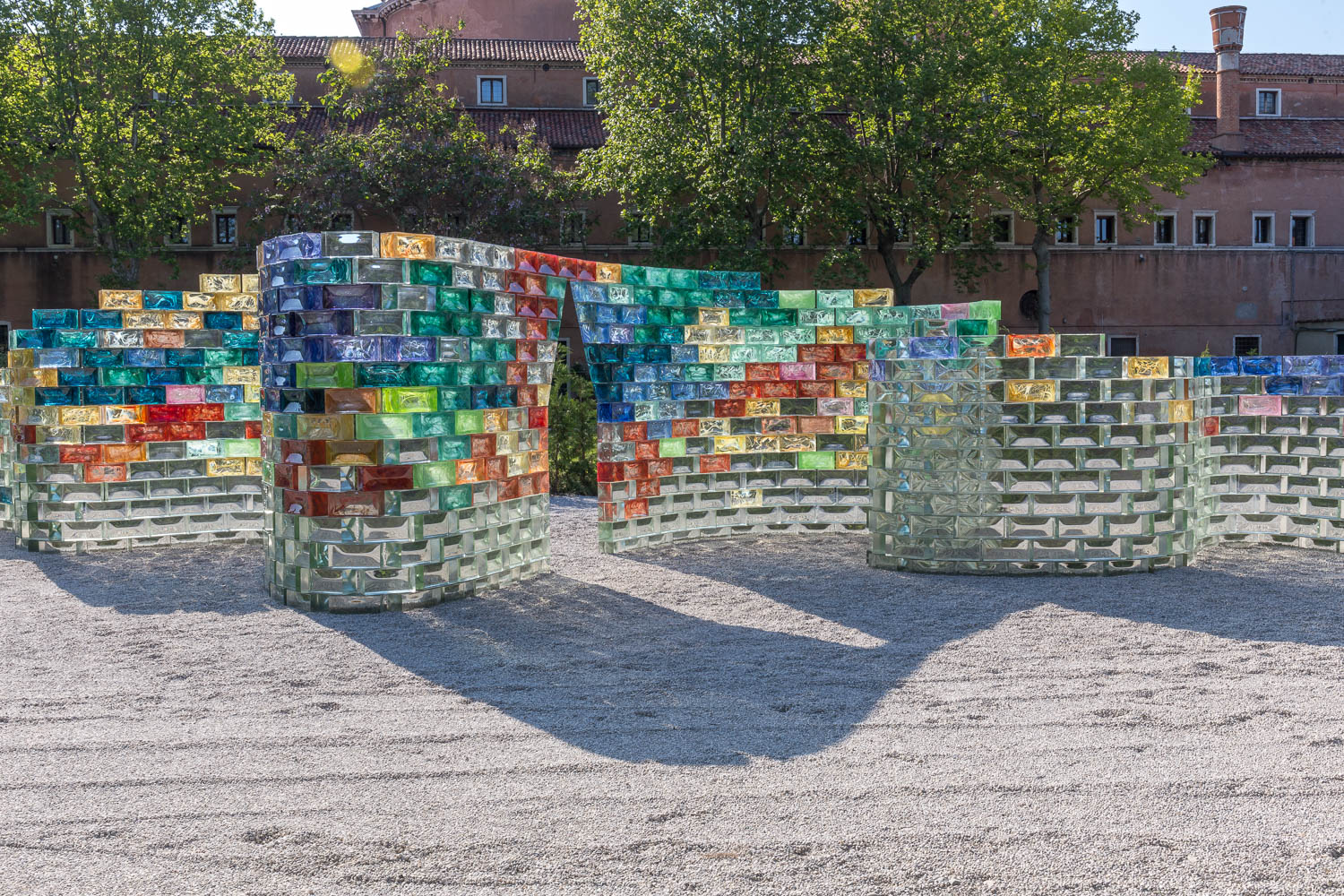 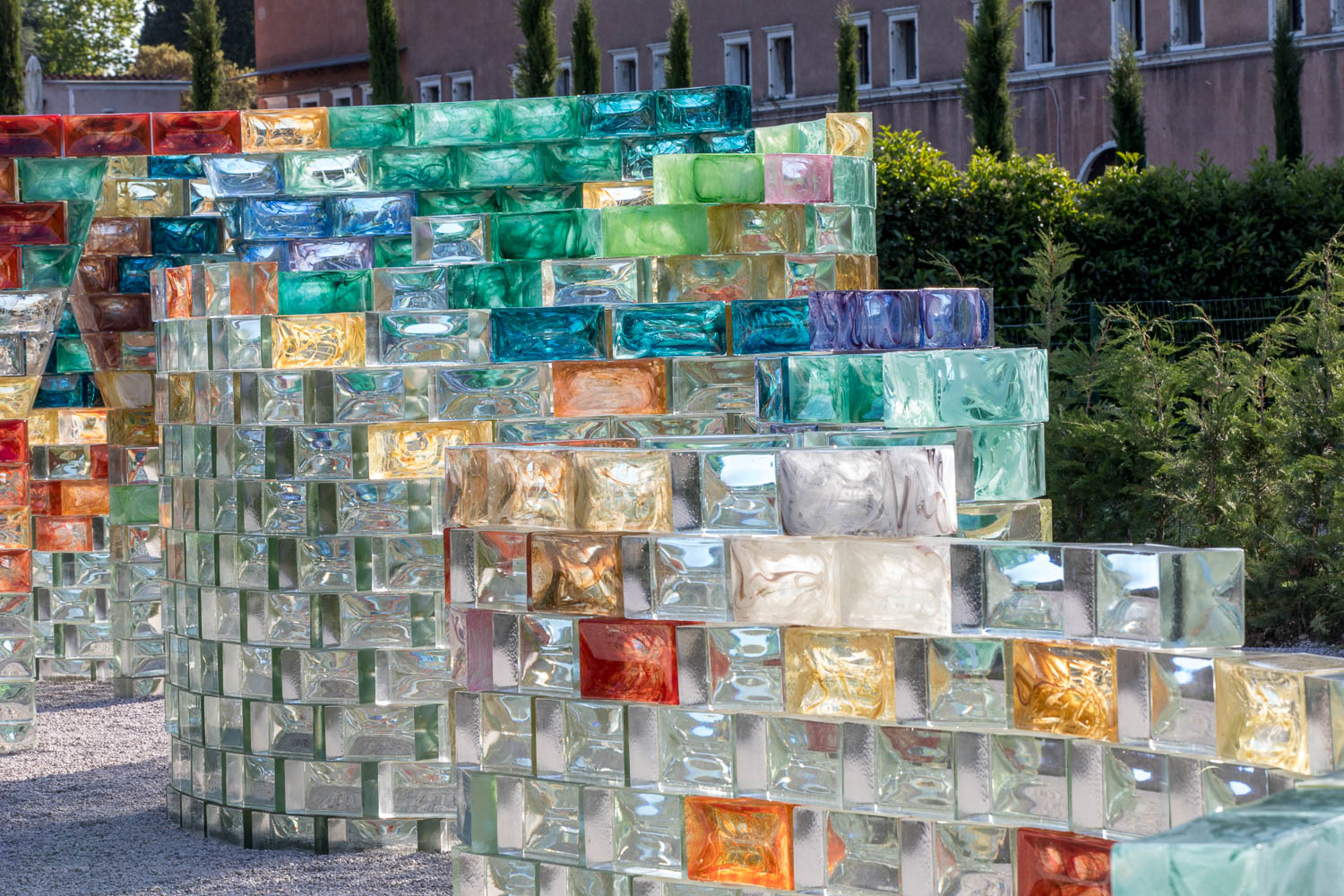 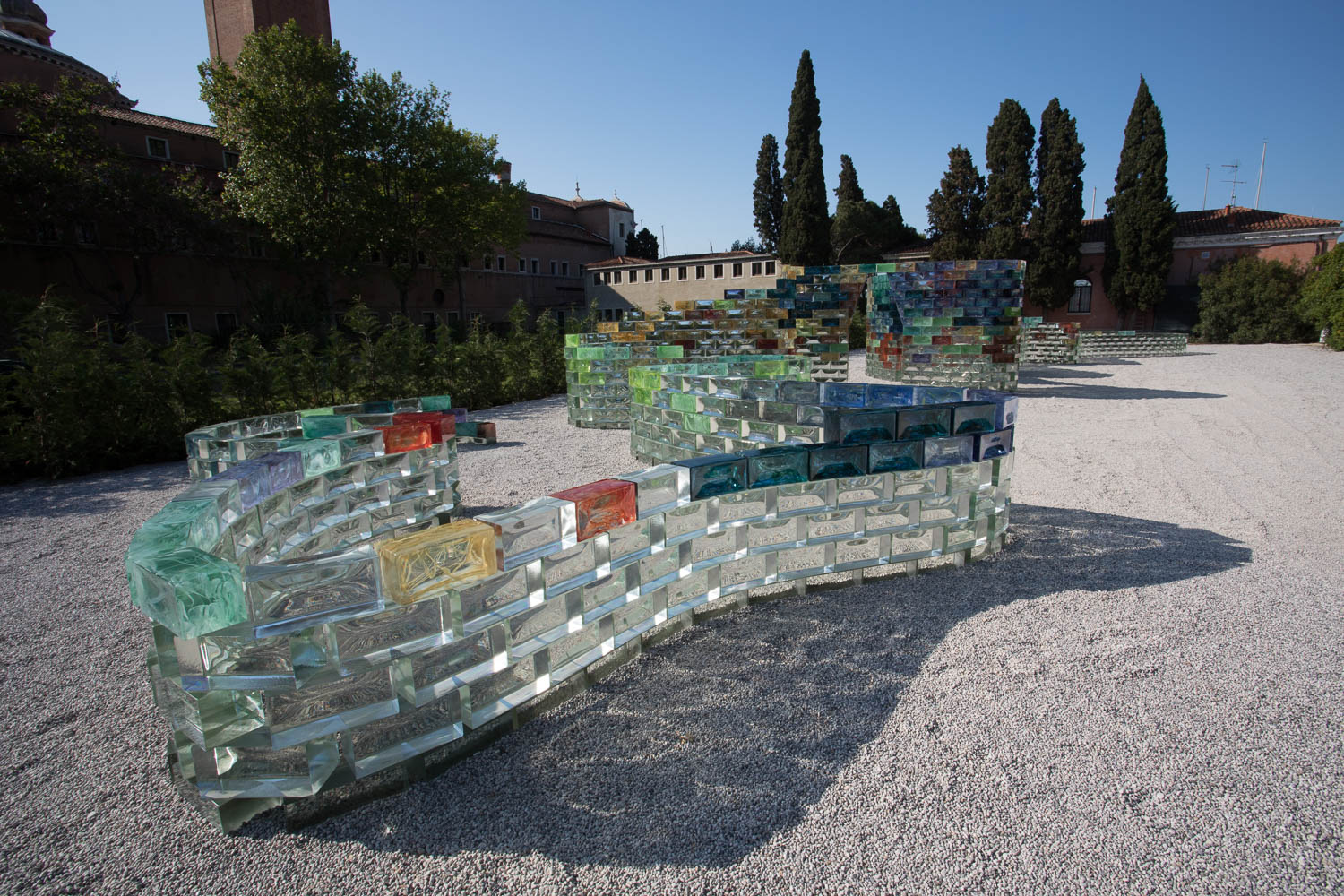 The monumental sculpture ‘Qwalala’ by the American artist Pae White opened to the public on the Island of San Giorgio Maggiore in Venice during the 57th International Art Exhibition, the Venice Biennale.

The 75 m curved wall consists of 3,000 hand-cast glass bricks of 23 kg each. The wall’s shape and colors were selected by the artist from thousands of computer-generated random combinations. Inspired from Roman glassmaking, the massive blocks shine in 25 different colors. The curved geometry allows horizontal loads of the up to 2.40 m high wall being economically transferred via normal forces rather than bending moments in the shell like structure as well as a wall thickness of only 16 cm. Due to the historic ground and the prescribed foundation depth, the wall is based on steel plates. The short building period of only six weeks required a quick assembly of the glass bricks. Furthermore, the structure should allow an easy disassembly after the end of the exhibition. Therefore the bricks were glued together on site using a structural silicone in white. The result is a fascinating and exciting art work that combines traditional craftsmanship with advanced engineering.

Qwalala, a monumental new sculpture by American artist Pae White, opened to the public on the Island of San Giorgio Maggiore in Venice, coinciding with the 57. International Art Exhibition – La Biennale di Venezia. Qwalala consists of a curving wall made only of solid glass-bricks. 75 metres long and 2,4 metres high, the thousands of glass bricks for Qwalala were hand-cast by Poesia Glass Studio in the Veneto region. Each of these hand-cast bricks is unique, owing much to chance and variation inherent in the artisanal manufacturing process.

Approximately half of the bricks are made of clear glass. The other half span a palette of 26 colours, and are made using a technique where each brick contains a storm-like effect of swirling colour, while remaining transparent. For this project, the individual bricks present the idea of modules of contained chaos. The artist combines these bricks to form an abstract, painterly pattern when viewed from afar, which, upon closer inspection, reveals unexpected worlds of detail. The muted blues, greens, pinks, greys and browns of the palette are drawn from colours used in first century Roman glassmaking created by the presence of sulphur, copper, manganese, and other metals and minerals.

The seemingly simple structure is actually a feat of engineering, supported by a steel base and a special structural sealant —the design came from engineering firm schlaich bergermann partner, while the sealant came from Dow Corning.

Apart from being another exploration on how common materials can come together with cutting-edge technology, Qwalala would seem an evolution in White’s preferred topic of water and fluidity: about a decade ago, she started experimenting with cascading mobiles representing schools of fish and collections of ponds. With this large-scale outdoor sculpture in San Giorgio Maggiore, she’s allowing visitors to somehow walk through water —the monumental work has several human-sized openings for those who decide to go for a closer view. There’s a big payoff in that: half of the

bricks are clear, but the other half captures in its interior swirling masses of 26 different colours. The blues, greens, pinks, greys and browns inside represent both the history of glassmaking —the process used during first-century Roman craft captured hues brought out by sulphur, copper and manganese— and the mineral richness of the earth around the Gualala.

The title of the piece, Qwalala, is a Native American Pomo word meaning “coming down water place.” It references the meandering flow of the Gualala river in Northern California, which the work echoes in both its structure and layout. The wall’s ever-shifting play of light, recalls the way in which the colour and temperature of the river water changes minute to minute as it meets the Pacific Ocean. Additionally, the name “Qwalala” itself, rolling off the tongue, also mimics the visceral experience of the body as it journeys around and through the curves of the wall.