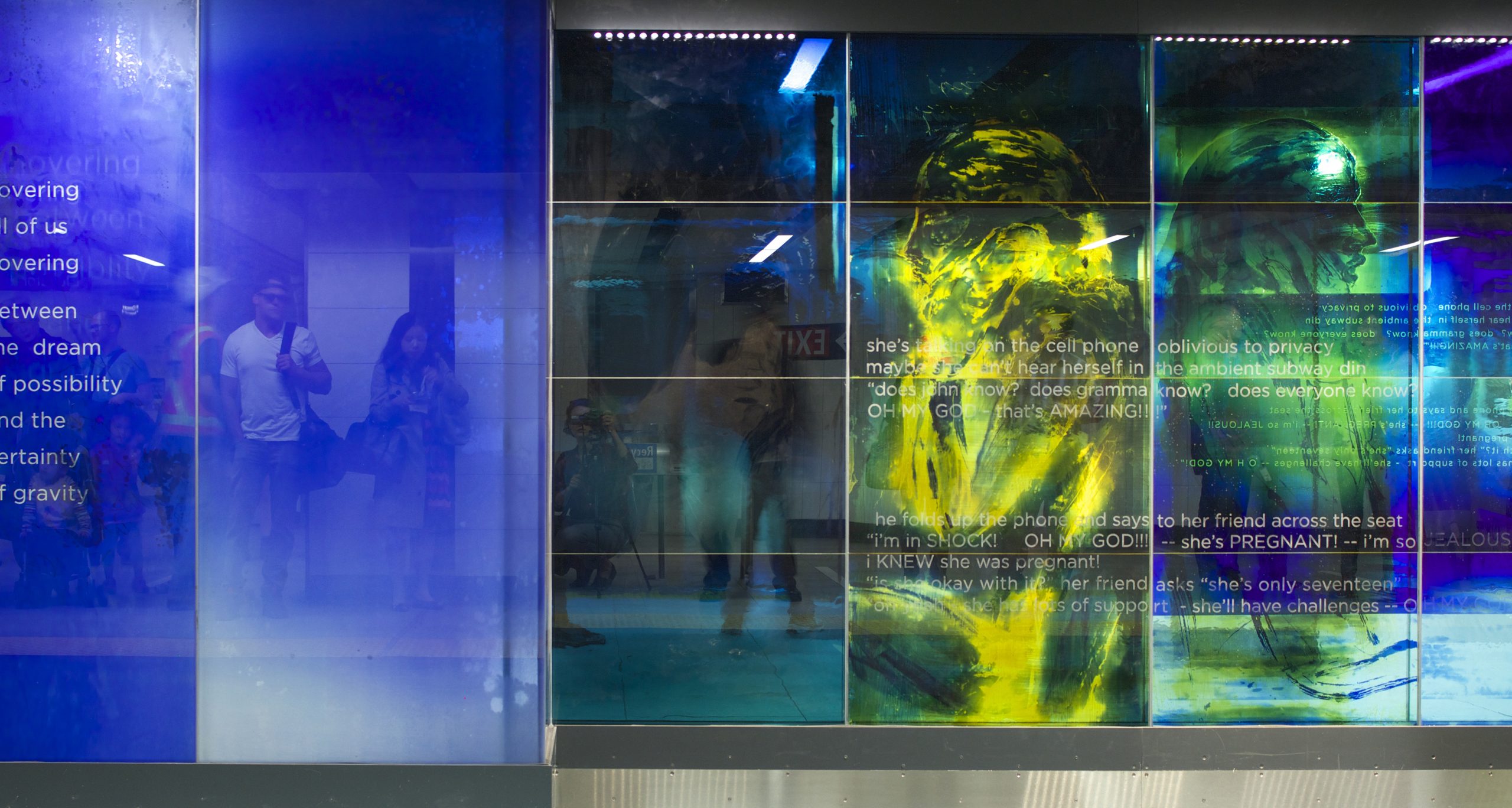 “zones of immersion” is an epic, translucent/transparent mural composed of silver-stained, enameled, acid-etched and laminated glass panels. Using imagery and text, the artwork captures the blurred, throbbing rhythms of a city in transit. The design responded to an international competition for Toronto's Union Station revitalization, and sought to evoke the commuters’ lived experience. Possibly the largest permanent public art project in Toronto’s history, it runs the length of Union Station's redesigned subway platform (7' x 500'). Glowing colours and monochrome portraits of commuters are either reflective or transparent, making the entire artwork both ribbon and veil.

The transit commission sought an integrated artwork that acted as a barrier and fire wall between north and south platforms, as well as an engaging and spectacular artwork that allowed, in places, views from one platform through to another. The project had to be able to withstand the cyclonic pressure of the subway high-speed trains and any blunt-force trauma. It had to be impervious to vandalism and easily cleanable from accumulated brake dust. The artist envisioned the project as environmental art – an experience the public is immersed in as they walk through the space or contemplatively wait for the train. Reid says: “It is filmic, immersive, and responsive to the viewers’ movements – seeing themselves figuratively and literally mirrored in this subjective rendering of the very experience they are objectively part of at the moment of their viewing.” Because the architectural project was constricted by a single-story, low-ceiling space with no natural light penetration, the artwork played a significant role in providing the qualitative aspects of the space, including ‘embedded psyche’ and creating rich interplay between color and light, human gesture and movement.

The call for submissions came quite early in the process, enabling the artist to engage with the design team. The comprehensive and environmental scope of the proposal was embraced with enthusiasm by the jury and the client. The artist worked closely with Project Architect, Dom Grossi, and Toronto Transit Commission (TTC) Project Director Malcolm MacKay to accommodate many changes necessitated by structural and technical issues. The overall fabrication was executed by NGI (Toronto) and Peters Studios (Germany). Due to the delays in the station’s construction, the project was not installed until eight years after the initial competition. The first fabricator, contracted by the TTC, filed for bankruptcy, and the artist facilitated transfer of the project to Peters Studios, Germany. He spent 178 days at the factory, both painting the glass panels and supervising the overall fabrication. He worked closely with project director, Viola Lingstaedt, who managed Peters Studios’ technical production team (handling, firing, sandblasting and laminating, shipping, etc)..
After the project was successfully shipped to Toronto, the artist oversaw the sorting and installation of the pieces so that none of the 167 pieces were mislaid or damaged by the installer.

An article by critic Mark Mann appeared in Neues Glas magazine, Vol 1 2016 issue. A link to the article is at http://www.gevik.com/reid/zones of immersion.html To see images of the design, individual panels, over fifty full-scale drawing and a short documentary on the making of zones of immersion, visit: www.stuartreid.ca An article by Chris Hume, architecture critic, Toronto Star is at: http://www.thestar.com/news/gta/2015/03/31/union-station-artwork-an-exercise-in-artistic-transparency-hume.html