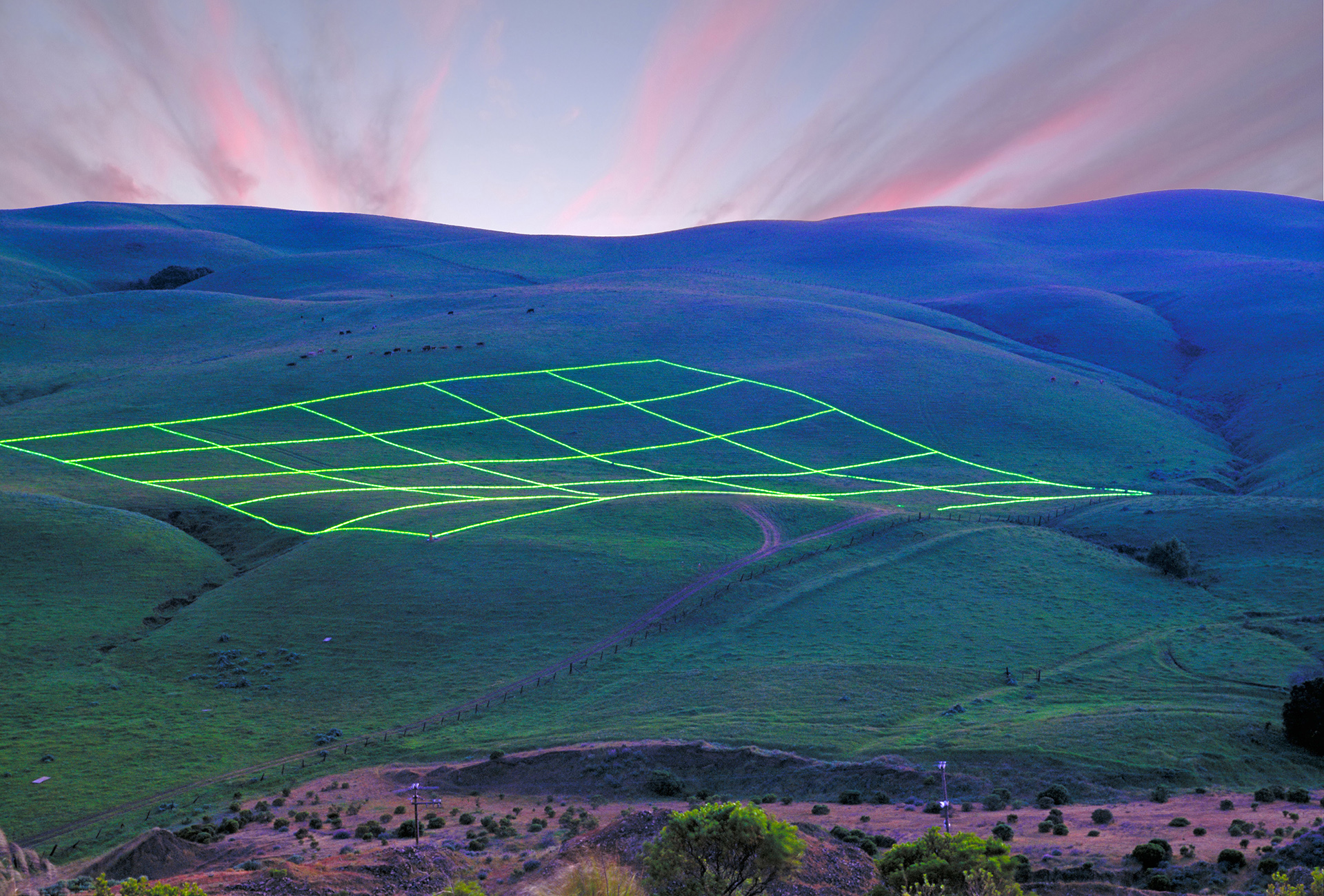 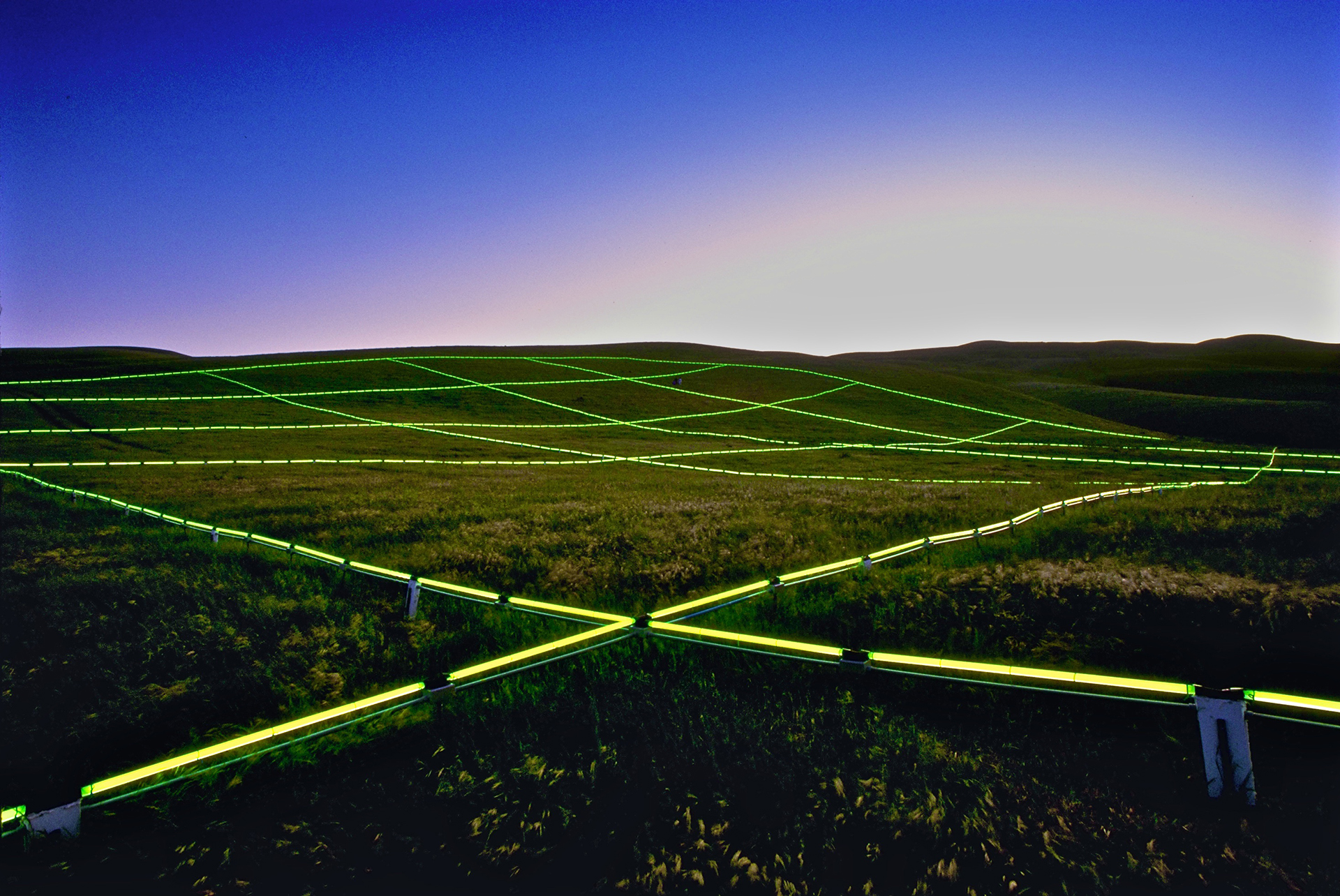 1,680 energy-efficient fluorescent lamps (total area = 8 football fields) swept over an undulating landscape 50 miles north of San Francisco. T-8 lamps, steel, rubber, copper, 12 miles of electrical cable. 360,000 sq. ft. “It emanates a sense of the romantic sublime with its aura of surprise and wonder. It is a very beautiful thing. I think people are very lucky to have a chance to see such a fine work of art.”— Peter Selz, curator, Museum of Modern Art, New York. For a sense of scale, note the herd of cattle grazing just above the grid (top photo).

Said the artist, “I see this project as a poetic statement about the potential harmony between technology and nature. The glowing green grid can be seen as an icon of computer imaging technology, which in this ‘real life’ incarnation, gently melds with the flowing shape of a lovely landscape... a dream-like vision of symbiotic unity. As an artist, I’m interested in contrasts… natural and man made, real and surreal, old and new, rural and urban. But those contrasts do not need to have anything to do with being separate or apart. In fact, it is the underlying and perennial interconnectedness of all things that is of the highest interest to me. So many people have long thought of technology as evil and nature as good. But when they are brought together in a thoughtful and compatible way, the whole truly becomes greater than the sum of the parts. And now this is becoming increasingly evident, with the ever growing awareness of the pressing need to go green with renewable energy and green architecture.”

Major Funders & Contributors: LEF Foundation, St. Helena, CA; Rene and Veronica Di Rosa Foundation, Napa, CA; Sylvania; Pacific Gas & Electric; Express Lighting Supply; CC Electric; Calistoga Mineral Water; Anheuser Busch. Cosponsors: New York Foundation for the Arts & Intersection for the Arts, San Francisco. Major participants: an installation crew of 200 and a team of 6 electricians. A 6-ton extension cable was strung down the mountainside and hooked into existing power lines along the freeway to bring power to the grid. That solid copper cable — the diameter of a man’s forearm — was valued at $50,000, and was loaned to the project by the U.S. Naval Shipyards in Vallejo, California. Over a five year period, Williams launched a rigorous fund raising campaign throughout Northern California, and raised nearly $500,000 in cash and/or in-kind contributions to realize the massive project. It was widely acclaimed by critics around the globe and drew tens of thousands of visitors. “It is unquestionably the most ambitious work of environmental art in the San Francisco Bay Area since Christo’s Running Fence. It is a joyful thing.” — Allen Temko, Pulitzer Prize-winning critic, San Francisco Chronicle

"A fusion of nature, technology and art," Peter Selz, curator, Museum of Modern Art, New York. "Our emotional connection to an increasingly technologically dominated life would not be addressed by most artists until years later. This makes the Luminous Earth Grid, by American artist Stuart Williams, all the more remarkable." iGNANT, Berlin (Berlin fine art blog). View more of the artist's work at www.stuartwilliamsart.com