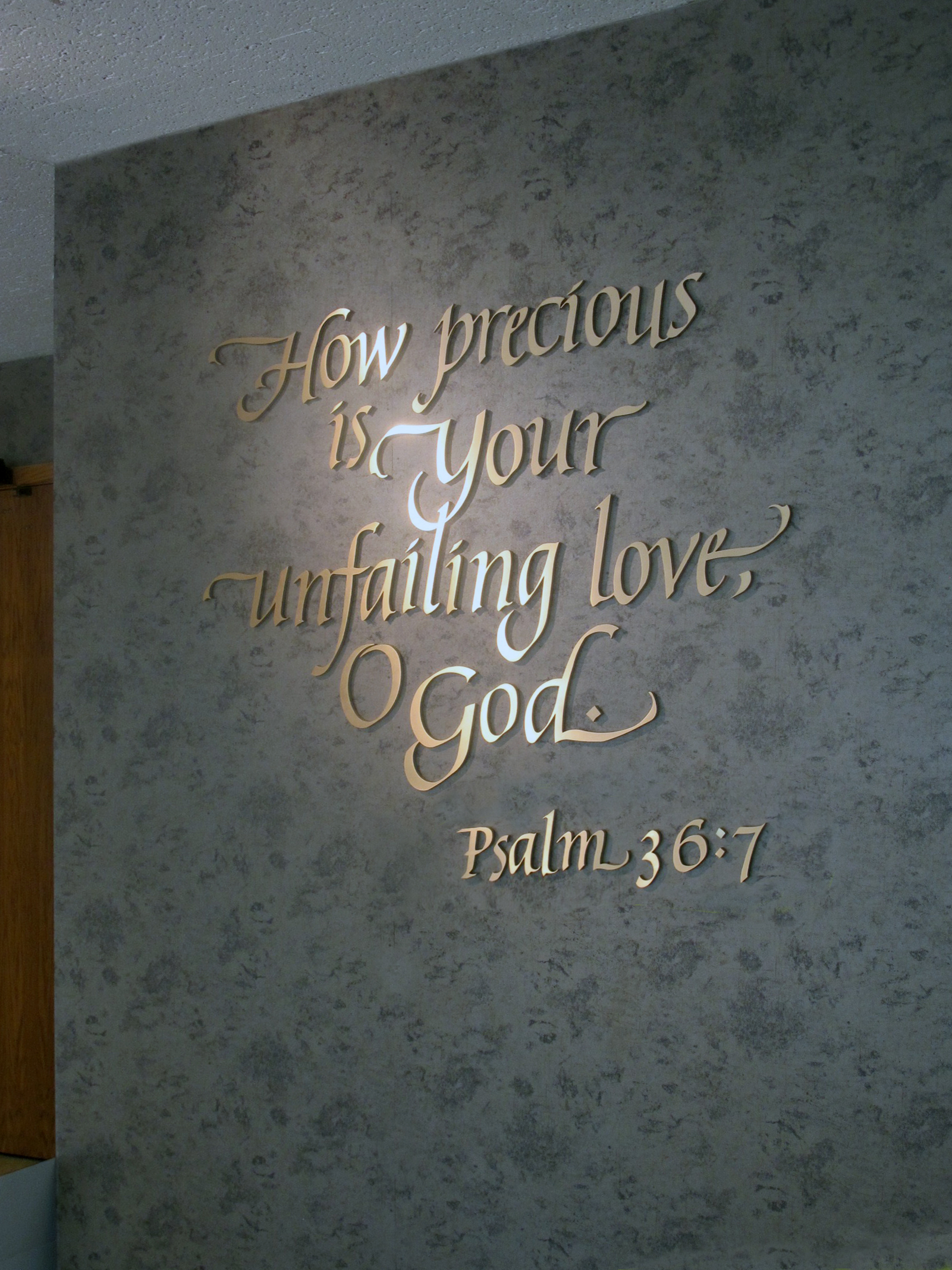 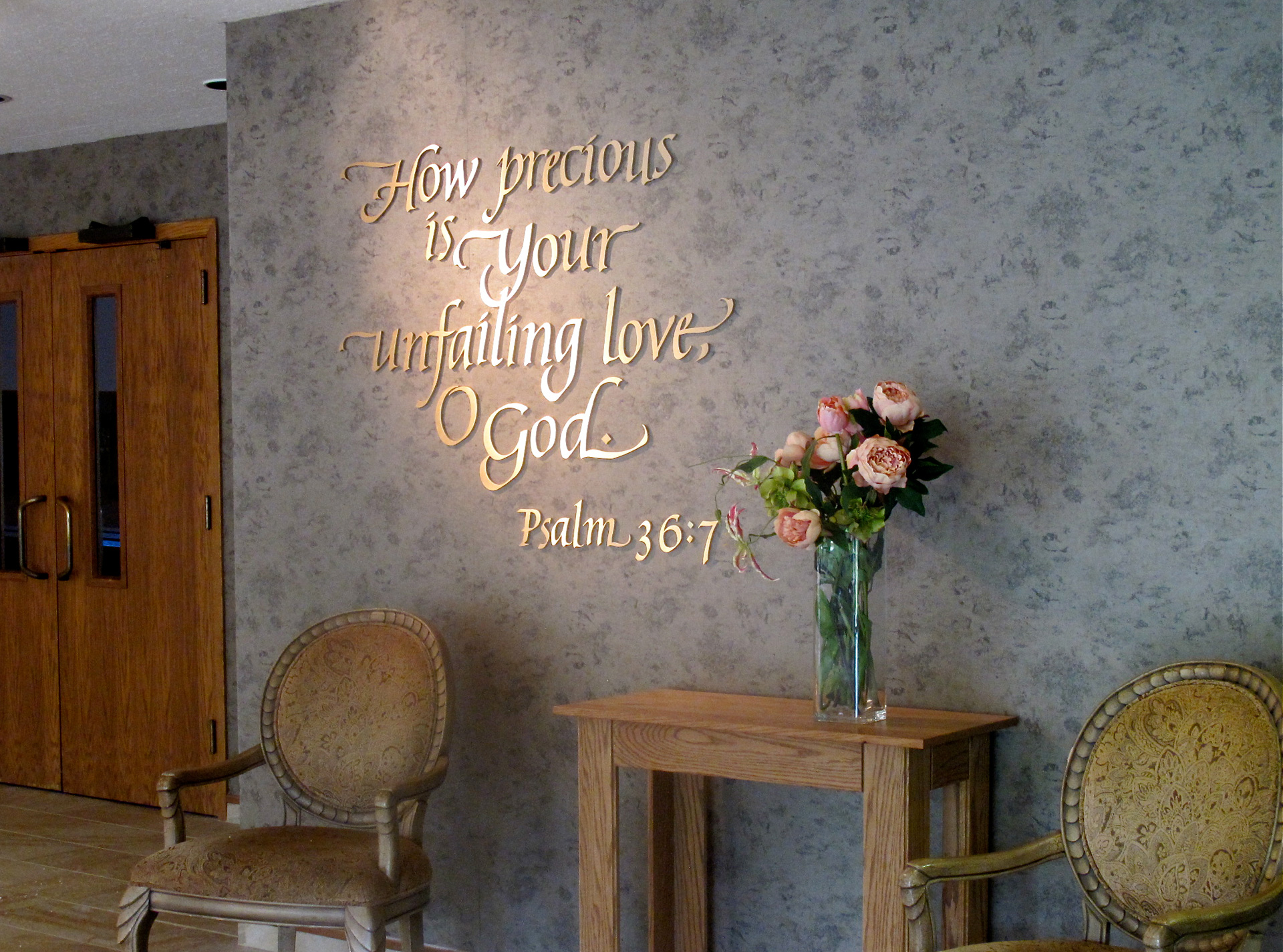 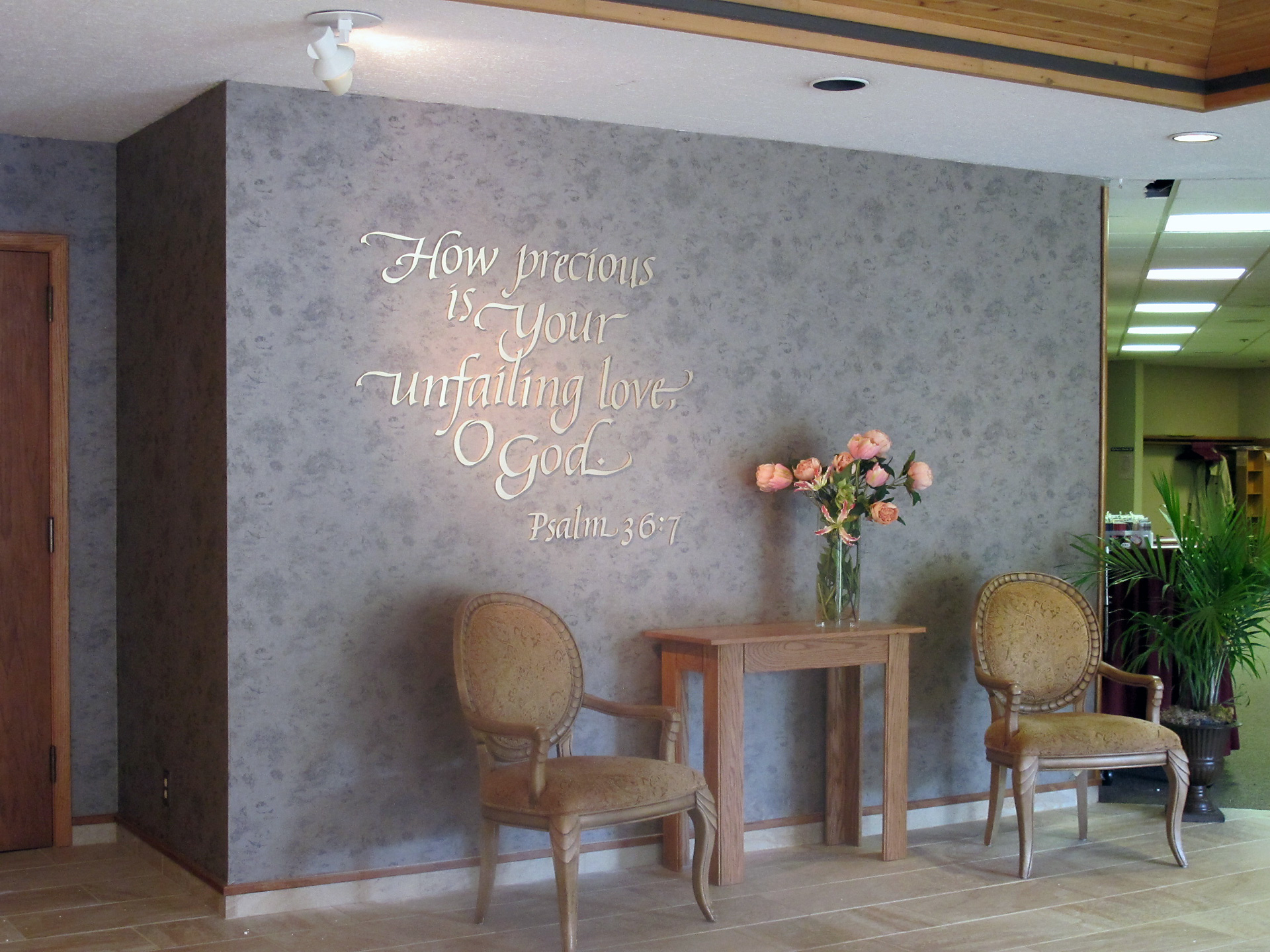 The Church wanted a portion of Psalm 36:7 to be done in calligraphy for the newly remodeled narthex. They originally wanted the lettering painted directly on the wall, but I suggested having the calligraphy water jet cut from bronze. The thickness of the letters is 1/4″. The piece measures approximately 3' x 3.5'.

The design committee was very clear that they didn't want the lettering to look like a commercial sign. They wanted a work of art, which is why they chose a calligrapher to design it. They were not aware of the possibility of having the calligraphy translated into bronze, but were very enthusiastic about the idea when I presented it. They had just installed new vinyl wallpaper and I was unsure about successfully writing on that material. In recent years I have collaborated with my husband, sculptor Wayne Chabre, on several public art projects involving water-jet cutting of letters and symbols from aluminum & Lexan, and was eager to try a calligraphy piece in bronze. I made a Photoshop simulation of how the finished piece would look, using a photo of the space the client provided. That was instrumental in helping both me and the clients visualize how the layout I designed would fit into the space. They had already installed lighting to "wash" the wall, anticipating the future calligraphy. The Photoshop simulation was the feature of my proposal that tipped the committee’s vote in my favor.

I did the original calligraphy at full scale in black ink on paper, scanned it in high resolution and created the layout of the words in Photoshop. I then created the digital DXF file that the water jet cutter required. At this point in the process I collaborated with Paul Good of Farris Engraving in Walla Walla, WA, who subcontracted the water jet cutting to Alcobra Metals in Spokane, WA. When the cut letters were returned to Paul, he did the final finishing on them and welded small studs to the back of each letter for mounting. He also created a full-scale template to use in positioning the letters and mounting holes on the wall. My husband, Wayne Chabre and I did the installation at the church, drilling the holes and positioning the letters.

As a calligrapher who generally works at a relatively small scale, on paper, it was very exciting and gratifying for me to see my calligraphy translated into bronze, and the Church was very happy with the result. I hope to have more opportunities to use this process.