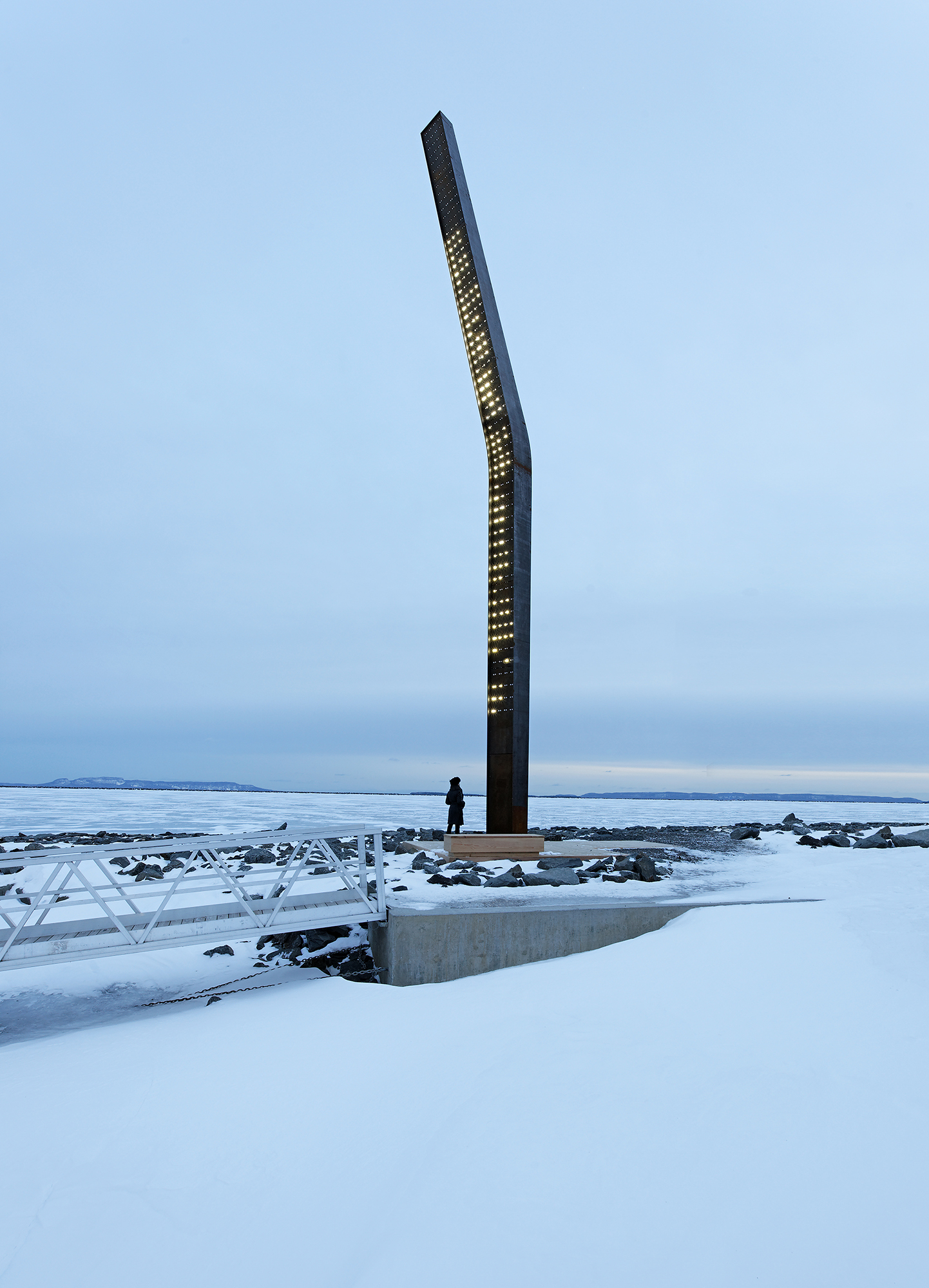 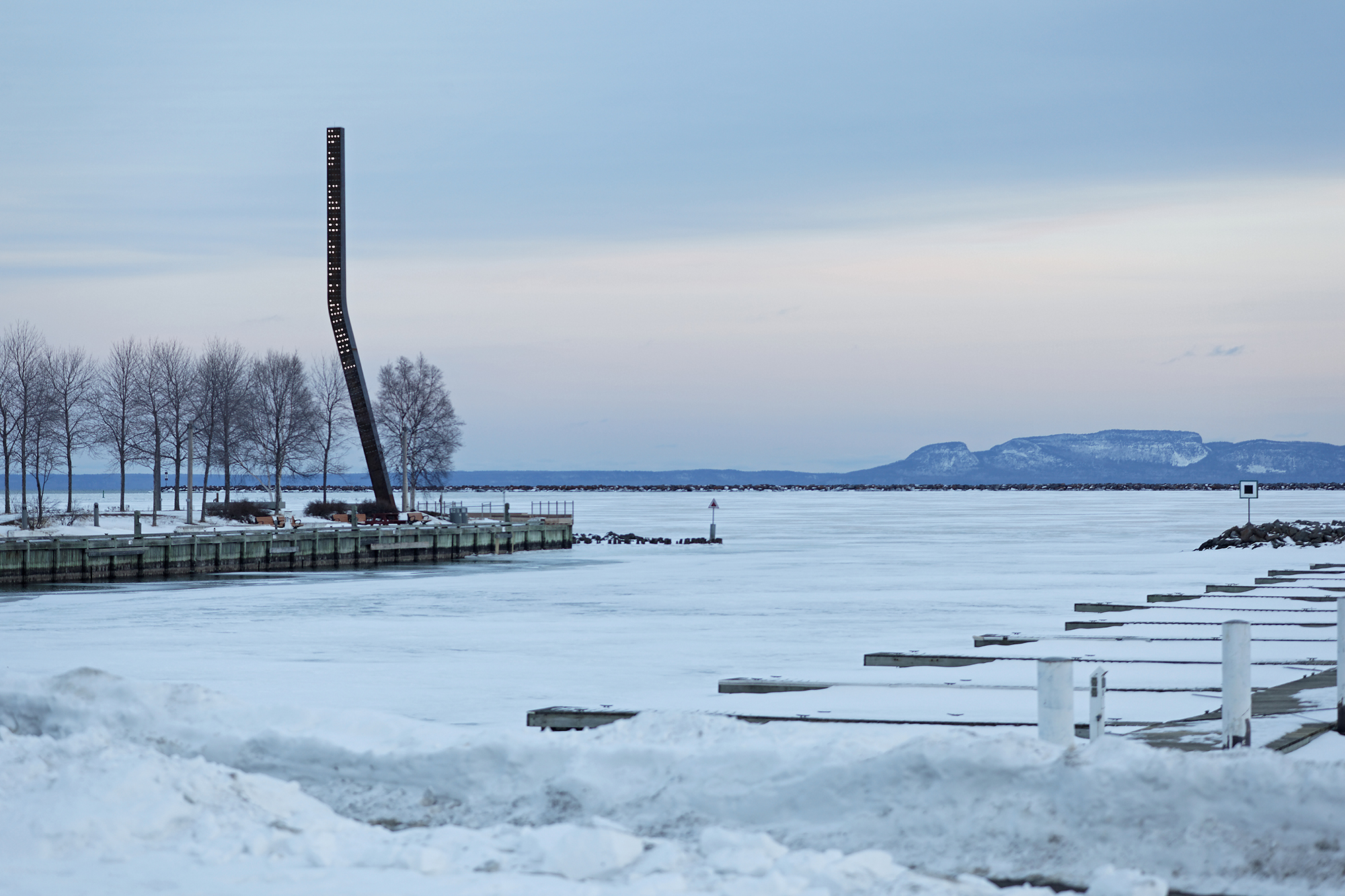 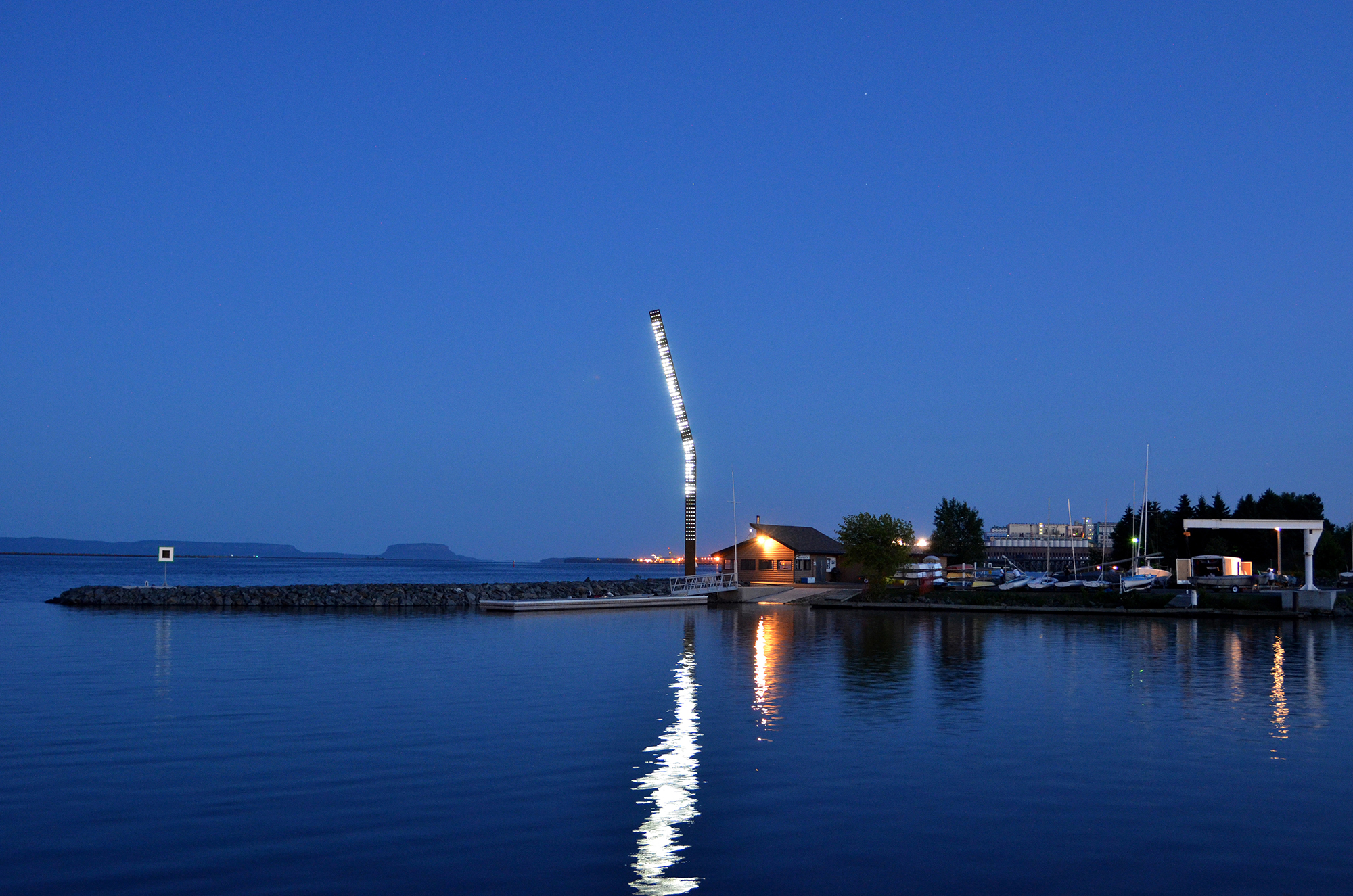 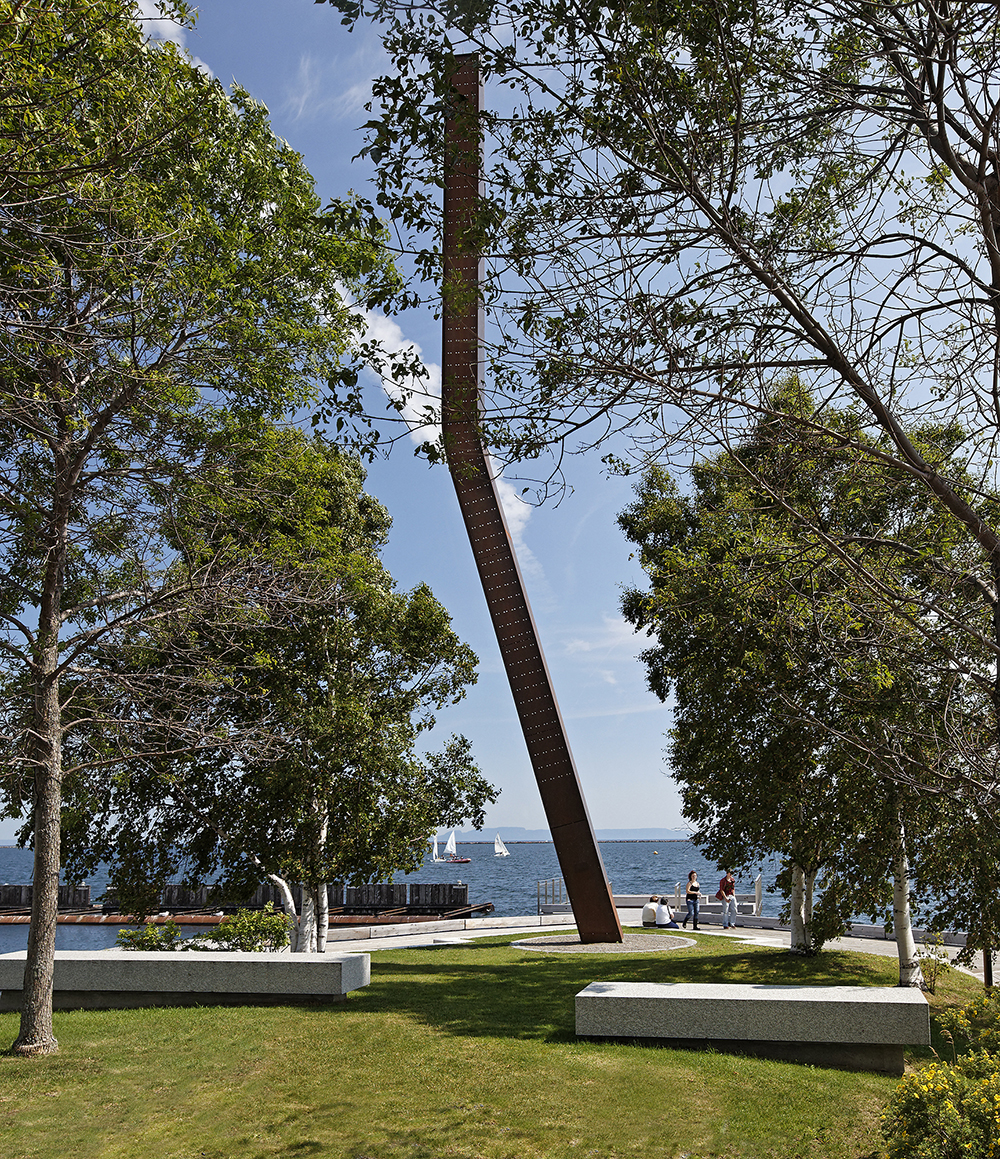 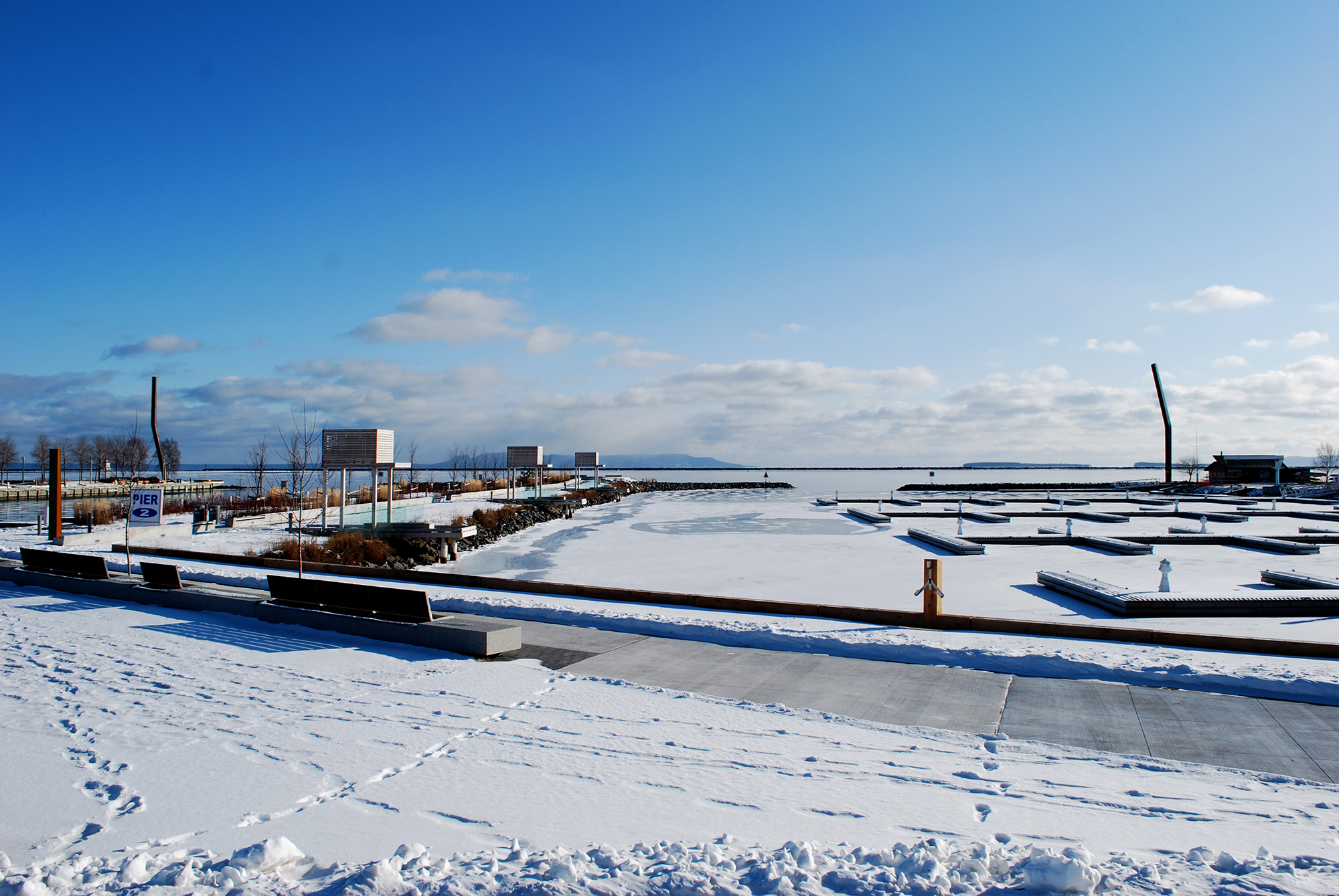 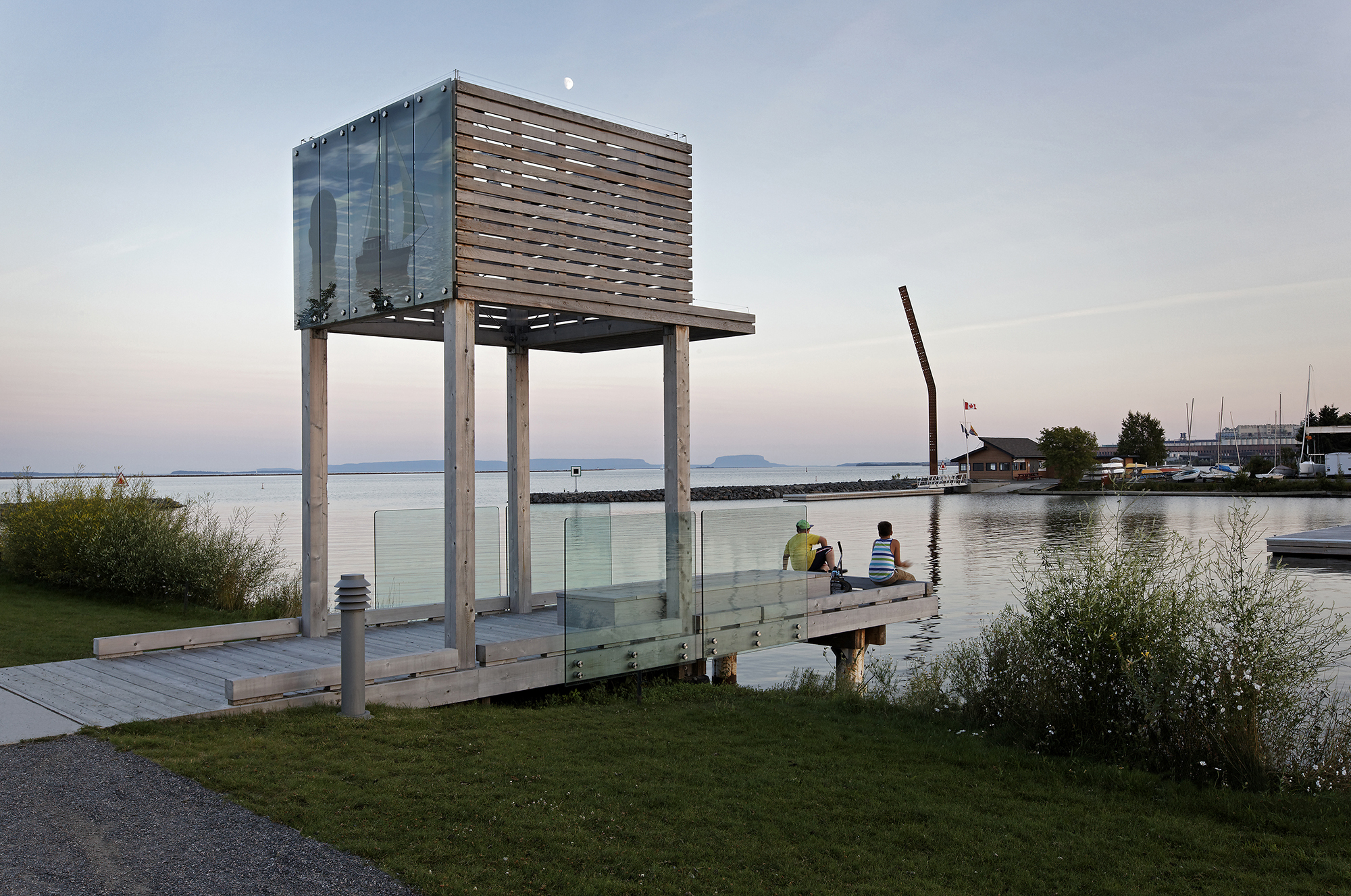 Client: The City of Thunder Bay

Jiigew [By the Water] is a public art element within Prince Arthur’s Landing, on Piers 1 and 3 in Thunder Bay. A pair of seventy foot high weathering steel sculptures act as two beacons with an inverse configuration. One leans forward, the other backward. An Anishinnabe poem-story is communicated by way of Morse code through digitally programmed scrolling LED lights that form a ‘light-waterfall’, and through an audio track that whispers the poem in both Ojibwe and English dialects. It tells a story of place, history and identity by evoking the image of shipbuilding, lightning and thunder.

The importance of creating special spaces at the ends of all three piers was identified early on in the Thunder Bay Waterfront Master Plan process. Pier 2 was identified as a place of quiet contemplation and Piers 1 and 3 were designated as locations to tell a story of the place. Inspiration for this story was drawn from both the significant location at the juncture of the Great Lakes system and the inland routes to Canada’s West, as well as the profound historical significance, including thousands of years of Aboriginal settlement history. The narrative consists of a poem-story created by Ningewance Nadeau, a local Anishinnabe author, in collaboration with spmb. The poem-story is communicated by way of Morse code through digitally programmed LED lights and through a whispering audio track that recites the poem back in both Ojibwe and English dialects. The goal was to enhance the visceral experience of Lake Superior and to bring residents and visitors closer both literally and culturally to their shoreline - through an architectural expression and materiality that strives to capture regional identity and supports a series of everyday activities that has improved the quality of life for Thunder Bay residents.

The two beacons were designed in collaboration between the public art studio - spmb and Brook McIlroy Architects. Central to the project was a unique approach of ‘embedded culture’ whereby public art is integrated throughout the built elements of the waterfront – the buildings, landscapes and site furnishings. To achieve this, the City of Thunder Bay allocated almost 3% of the overall construction budget to public art. The art links the experience of place to cultural touchstones including poetry, prose and extracts from letters written by historical figures that reflect Thunder Bay’s unique history, culture and genius loci (sense of place). The beacons are just one example of the integrated design process undertaken throughout the project, including architects and landscape architects working directly with public artists and local Anishinnabe communities to achieve the goals of embedded culture throughout the waterfront. All in all, there is no separation between the architecture (the beacon’s structure) and the art (light/sound/narrative), but the project instead recognizes the full integration of the two as a major force, producing a poetic synthesis of the Thunder Bay coastline and the native inhabitants. Based on Anishinnabe tradition, the result occupies the structures with meaning and celebration.