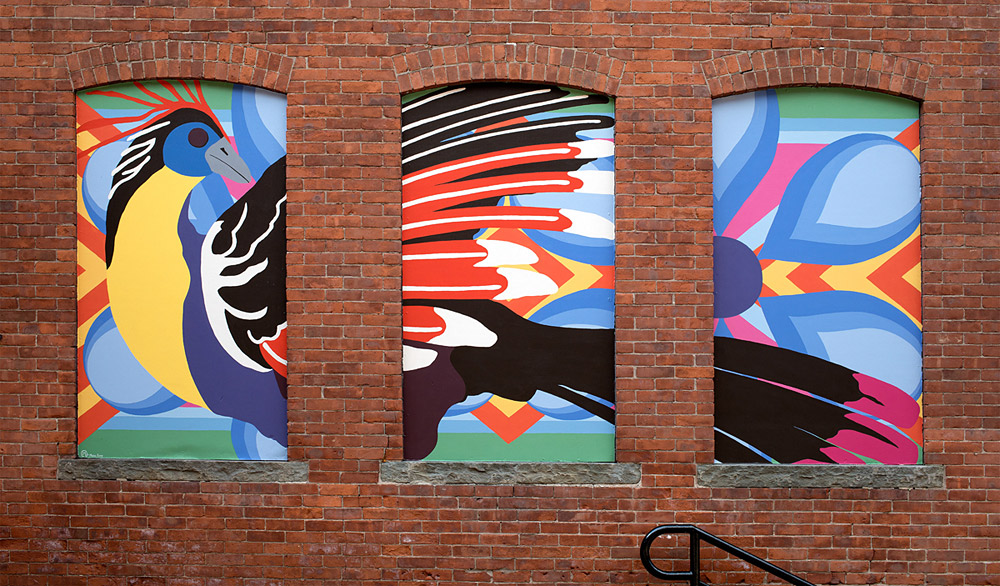 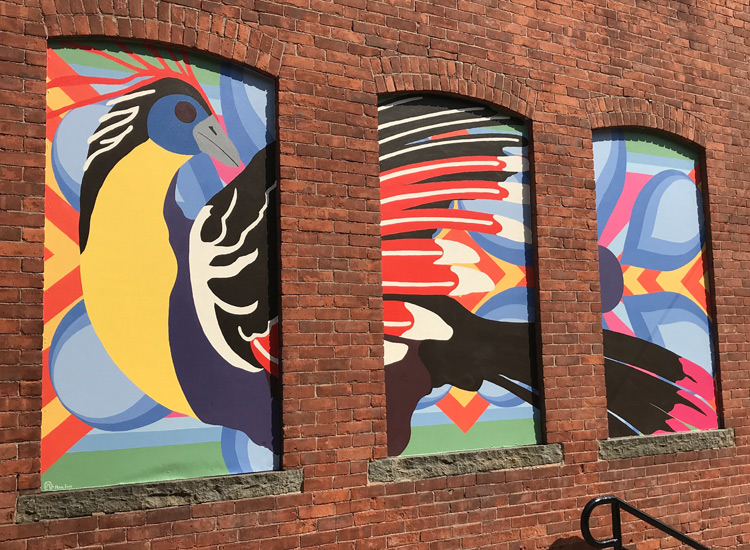 CityCenter Danbury is a nonprofit organization dedicated to promoting the vitality of Downtown Danbury. In May 2018, they commissioned Mural Envy to transform three boarded-up windows with a public art mural. The windows, totalling 95 square feet of paintable area, line an important pedestrian walkway that links parking facilities with historic Main Street. CityCenter's scope for this urban renewal project included improving the entire passageway with landscaping, structural repair, better lighting, and public art. Because of administrative delays, we only had 6 weeks to design and execute the mural before the planned ribbon-cutting ceremony.

The goal of the project was to make the pedestrian walkway more inviting to pedestrians, and to improve the overall image of Downtown Danbury. Like many post-industrial Northeast cities, Downtown Danbury is experiencing a revitalization as young professionals seek exciting, vibrant communities. The Post Office Walk Renewal Project sought to continue that trend by taking a crumbling public space and transforming it into a bright, encouraging space that would improve the city’s walkability and its overall image. Boarded up windows are a detriment to urban renewal. In this case, it was impossible to replace them with new windows, so turning them into public art was a perfect solution. Not only does a mural solve the problem of the appearance of decay, it beautifies the space and creates a landmark that helps boost civic pride and identity.

The boarded-up windows house the kitchen of La Mitad del Mundo, an Ecuadorian restaurant situated on Danbury’s Historic Main Street. In order to further tie the mural to the community, CityCenter requested that the imagery reflect the city’s diverse cultural heritage, specifically that of Ecuador and Brazil.

For this project, Mural Envy was both the designer and the artist. This worked particularly well for CityCenter because their time and budget restraints demanded lean operation and quick turnaround. The only artistic direction they provided was that the imagery reflect the city’s diverse cultural heritage, specifically that of Ecuador and Brazil. For the mural design, we researched traditional Ecuadorian patterns and color palettes used in textiles and ceramics. Mural Envy’s work almost always includes themes from nature, so we sought out birds and plants native to Ecuador and Brazil. We chose birds because they are often associated with freedom and movement from one place to another, two themes that Danbury residents from all backgrounds can identify with. For its visual interest, we chose a Hoatzin, a type of pheasant found both in Brazil and in Ecuador, though we took some artistic license with its plumage.

The design was accepted immediately without revision, allowing us to complete the mural in just two weeks, well before the deadline. CityCenter was extremely pleased with the finished artwork. They invested in an industrial-strength UV protection and anti-graffiti coating. Mural Envy consulted on the purchase and application of the coating.

In the year since this mural was painted, artist Toni Miraldi has been frequently told by Danbury residents how much they enjoy this public artwork. Pedestrians often take pictures and selfies with the mural, locals refer to the walkway as,”the one with the mural,” and some people have asked if they can purchase prints of the professional photo we had made. Even better, the positive reception is helping to change minds and open up new opportunities for public art in Greater Danbury.