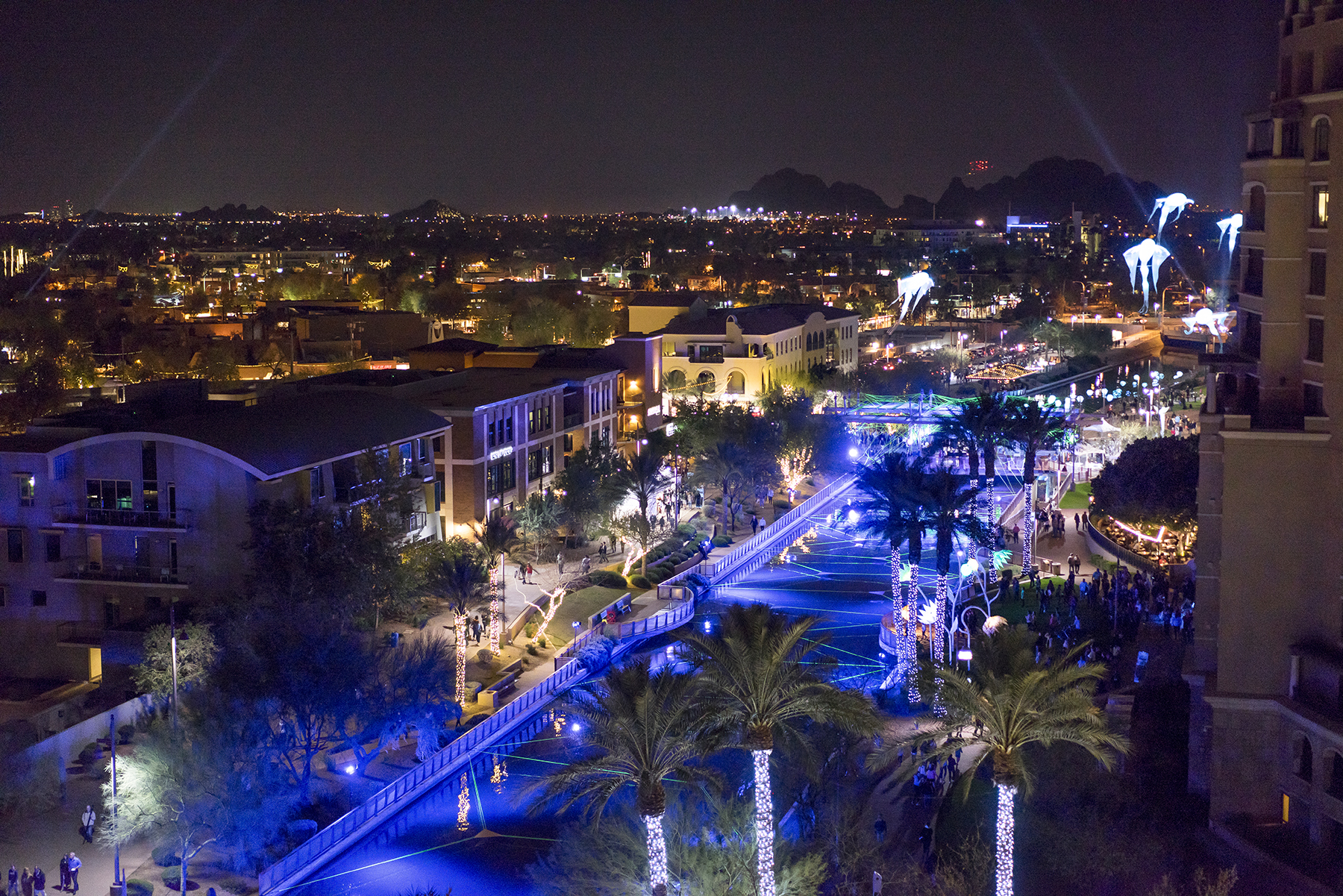 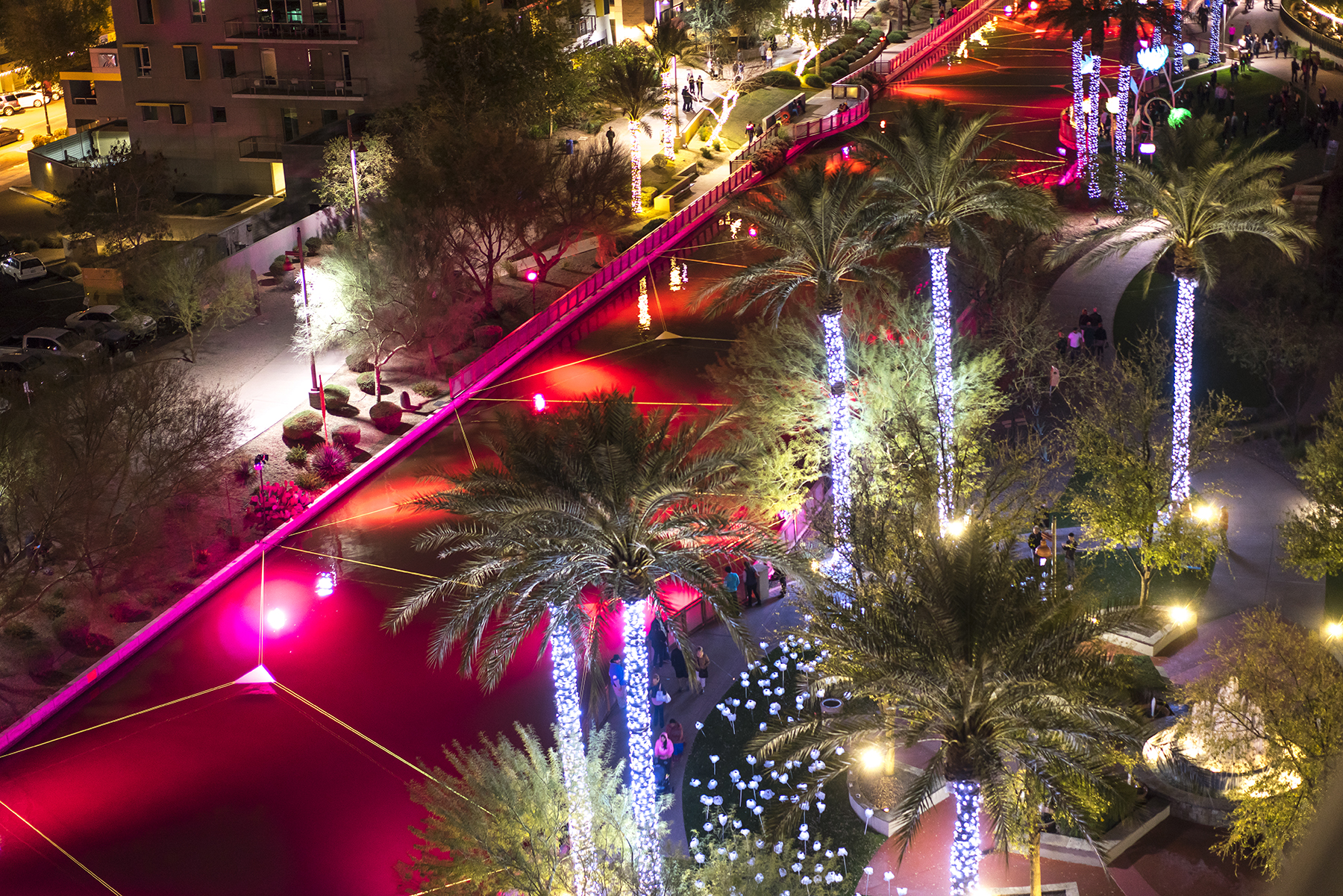 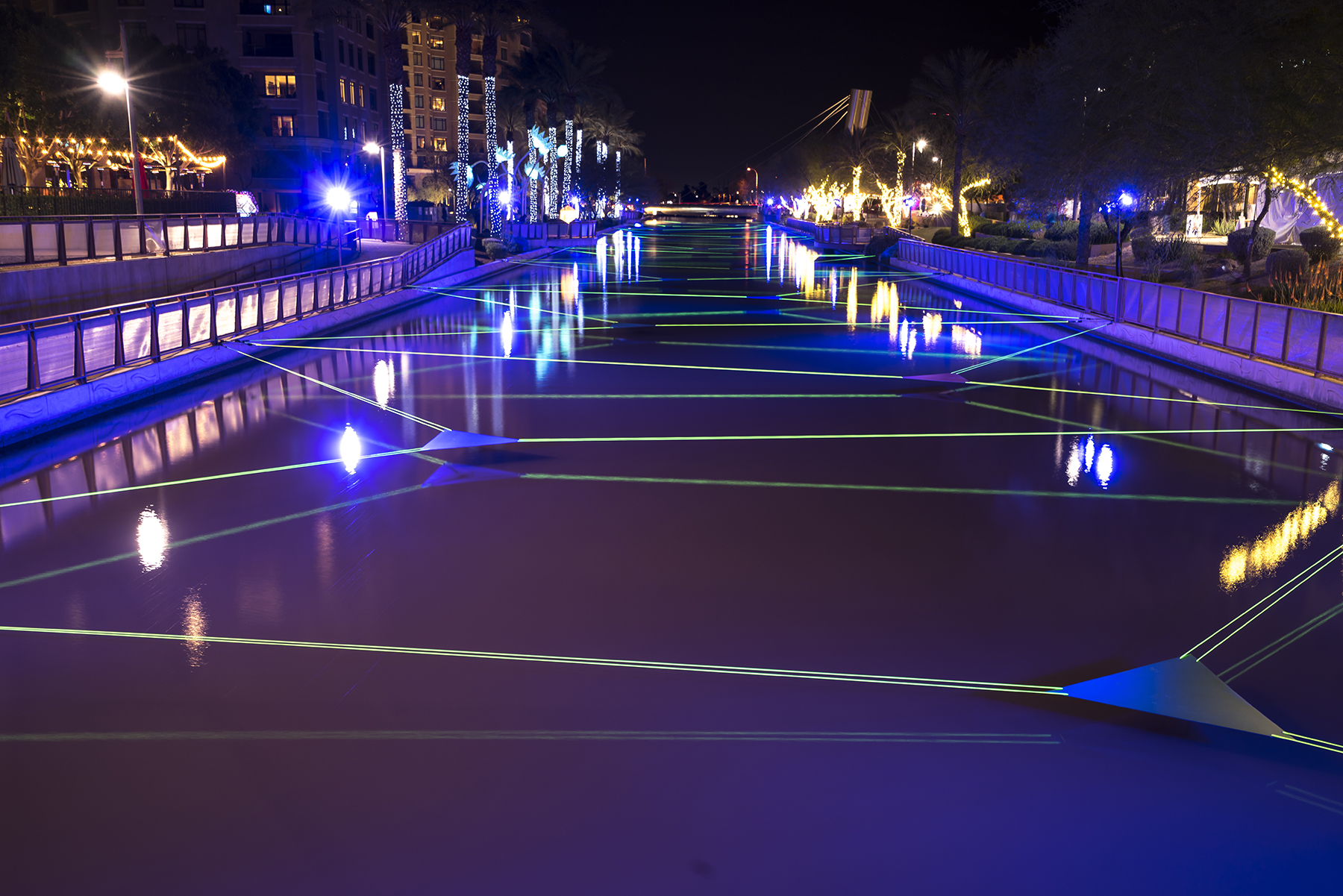 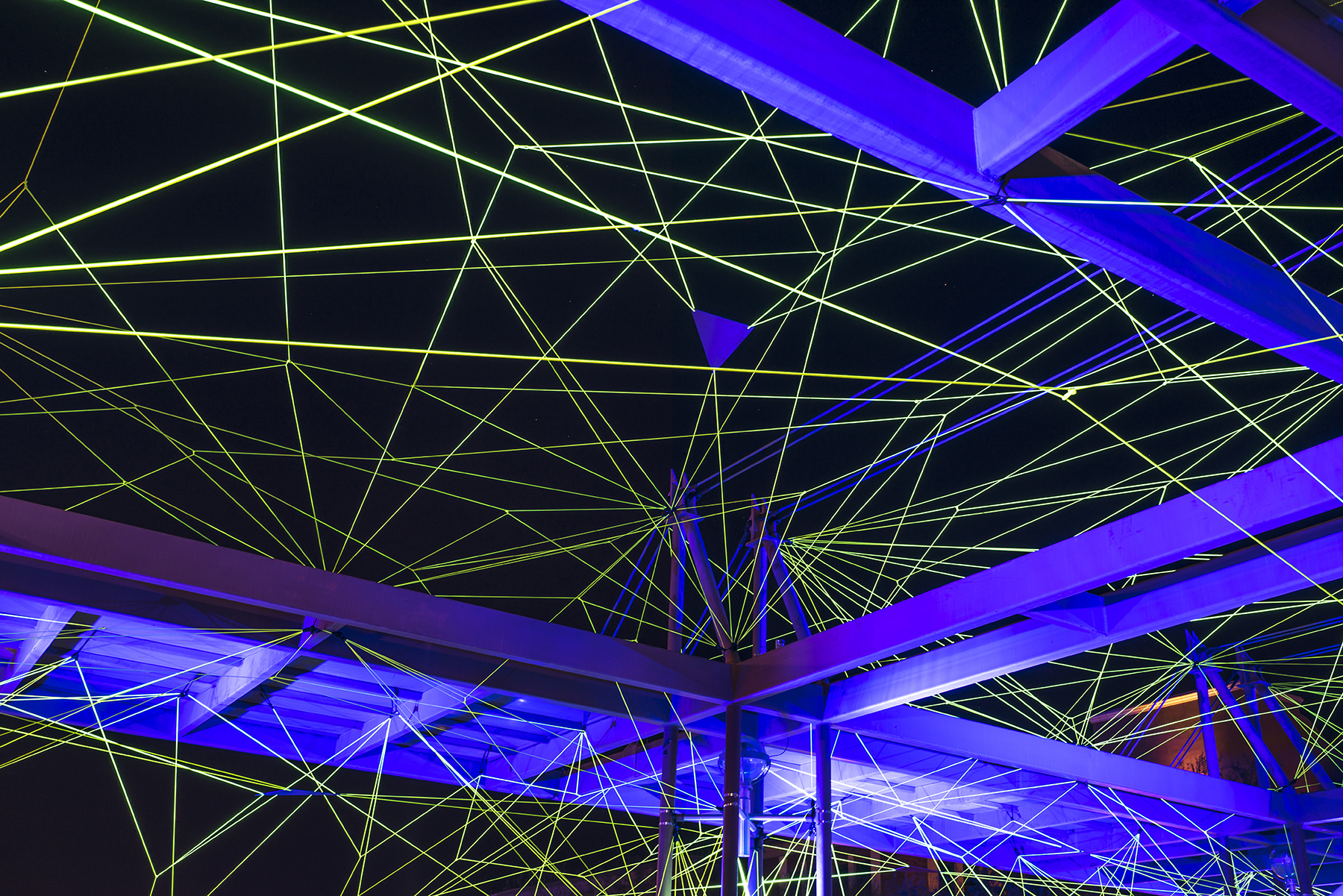 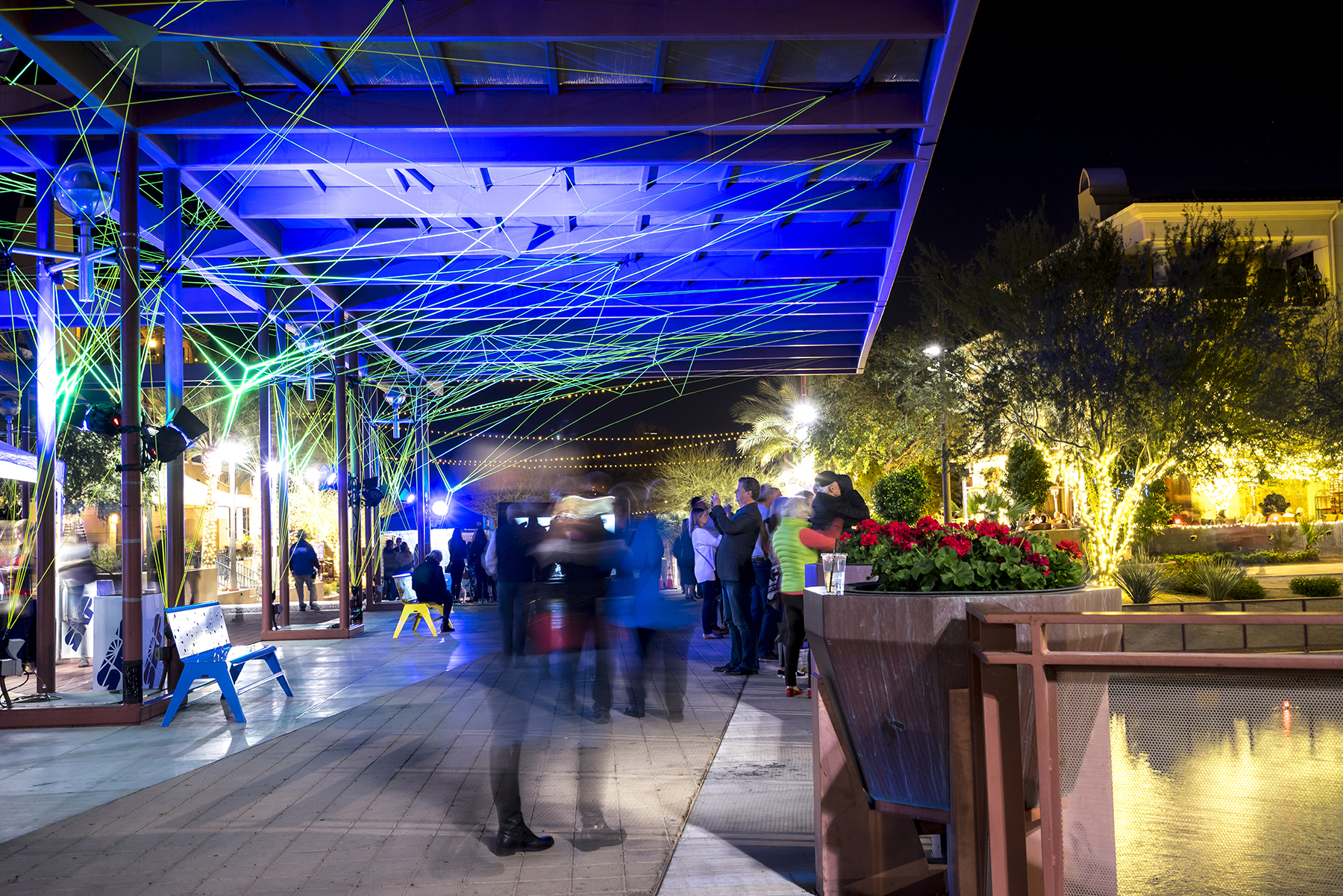 Polygonum 2.0 by Belgian artist Tom Dekyvere is a large geometrical rhizome construction of rope and reflective triangles lit with multi-color LEDs. Consisting of over 13,000 feet of rope, the artwork was installed above the Arizona Canal between Soleri Bridge and Marshall Way Bridge, and extended up to wrap the Marshall Way Bridge in Scottsdale, Arizona. Dekyvere’s public art practice explores the evolving and often unexpected bond between technology and the natural world. Polygonum 2.0 showcases the relationships between the organic and artificial structures specific to the landscape of Scottsdale Waterfront and the people who inhabit it.

Canal Convergence Water Art Light is an annual light-based art event presented by Scottsdale Public Art at the Scottsdale Waterfront. Each year Scottsdale Public Art puts out a request for proposals for a public art installation for Canal Convergence that integrates the theme of Water Art Light into the Waterfront placed either in, or above the Arizona Canal. Artist Tom Dekyvere has exhibited his public art installations throughout Europe, and in several instances, along or above moving bodies of water. With his portfolio of installations, Dekyvere had proven his ability to be responsive to the surroundings of a variety of public littoral sites. Polygonum 2.0 successfully incorporated the primary theme of art and light highlighting the Arizona Canal system by creating a manner of “artificial ivy” that created “A symbiotic moment where the whole site (becomes) wrapped into the luminous intervention.” The installation highlighted the vital waters of the canal with multi-color, glowing light sequences, as well as the architecture and dense population of waterfront area with its structured, geometric forms and line convergence at the Marshall Way Bridge.

Scottsdale Public Art and artist Tom Dekyvere, and his team collaborated over a period of 6 months to realize the Polygonum 2.0 installation. Once the lighting programs, canal wall connection points, and all other variables had been finalized, the construction of this installation took two full weeks. Scottsdale Public Art also engaged Salt River Projects, (SRP), one of Arizona’s largest power providers and the owner of the Arizona Canal system, to assist in the placement of the rhizome construction over the canal. SRP provided land and water use permission, and safety and use of their boat while installing the lines across the canal, which is the only powered watercraft allowed in the canals. While the installation in the canal was happening, another team of both Scottsdale Public Art staff and Tom Dekyvere’s installers worked on wrapping the Marshall Way Bridge. This was accomplished through synchronized communication using ladders, scissor lifts, and installers in harnesses climbing all over the bridge. This work on the bridge was all accomplished while pedestrian and public transit traffic were allowed continuous access to the bridge.

Polygonum 2.0 was Tom Dekyvere's first commissioned installation in the United States. Through a special collaborative partnership between Scottsdale Public Art and BreckCreate in Breckenridge, Colorado, Polygonum 2.0 will be re-installed at WAVE Light Water Sound, an interactive art festival in June 2017.